It was an appropriate day for a visit to some of the most beautiful lakes in the Hatfield Wilderness on Friday. I started the trip from the Herman Creek TH and hiked up to the junction with the Gorton Creek Trail and the Gorge Trail about a mile in. The gorge trail over to Wyeth made for a good morning and there were lots of wildflowers blooming in the rocky slopes. The stone crop was looking sharp:

As well as the Thimbleberry:

The Baldhip Roses are blooming with more on the way

I think this is Rocky Mountain Maple?

Moving further east a crown fit for any angry king appeared above. Wyeth Crown with dark clouds looming about:

Back under the tree tops a fellow woods walker was found fleeing the oppressive king!

The moss covered stream side of Gorton Creek is always a welcome sight:

The gate to Wyeth is open and their were folks camping at Herman Creek too. After a little stop near the creek I hopped onto the Wyeth Trail for the next 4 miles up to Green Point Ridge. The Harpan Creek ford was a rock hop and prettier than usual with a little rain falling. The Wyeth Trail gains almost 4,000 feet as it climbs and switchbacks up the mountain side just east of Harphan Creek:

I hit some slushy snow just before the junction with the Green Point Ridge Trail around 3,900 feet. The trail from there had continuous coverage of the melty garbage snow all the way to North Lake. The clouds circled around Mt Defiance as I made my way towards the lake:

I found a nice little spot free of snow just above the lake shore to rest my pack and feet for a bit while the clouds continued to move in:

North Lake and Bear Lake both drain old glacial cirques just west of Mt Defiance and serve as the headwaters for Lindsey Creek:

A quick trip over to the Defiance Trail where I ran into a few awesome guys who were camped out at Bear Lake for the weekend:

I had never been to Bear Lake before and it was even prettier than I imagined it would be:

The crystal clear waters suddenly became inviting as the sun forced its way through the clouds but it was still a little cold for that summer dip:

To get over to the Herman Creek Trail I hiked a short section of Wahtum Lake Rd #2820 over to the Rainy Lake Campground:

The road was melted out where the guys were parked but had some snow a little ways past there. And lots of animal tracks:

The campground was empty and the temptation to explore and check out the short side trip to the lake was too much: 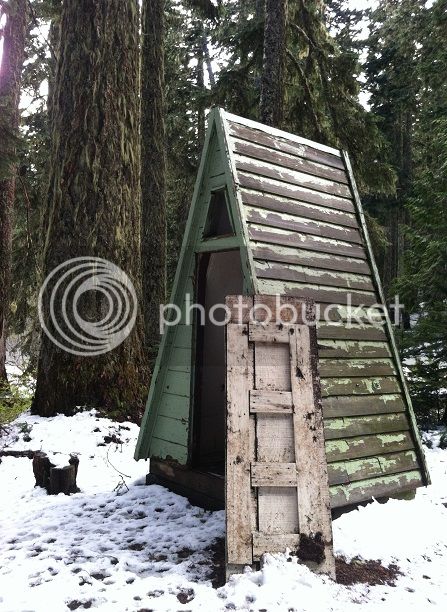 Green Point was going in and out of the clouds while I took a break at the lake for a while:

After about 15 minutes the sun made a grand appearance and it sure felt good:

Rd 670 or the Rainy-Wahtum Trail from the campground to the Herman Creek cutoff trail had more animal tracks , including some black bear prints:

There was also a lot more snow and several areas with drifts that are still a few feet deep:

I picked through a few layers to check out the old snow beneath about 8-10 inches of slush that fell over the last few days:

The old Herman Creek balloon shelter and just a quick drop from the swamp on the old cutoff:

The snowman followed me to the cutoff. I told him he would melt inside the cabin and that it was too hot for him in there but he insisted he would be fine

All that was left was his hat hanging on the windowsill:

Part of the door hangs in the ceiling above with the old keyhole still intact:

It looks like the bear decided to take a short cut up Green Point Ridge and drop down the other side hitting the cutoff trail just before the switchbacks:

There were some nice red currants in bloom on the way down:

The cutoff isn't hard to follow and doesn't have many downed logs but it needs some foot traffic and brushing out to beat back some of the encroaching undergrowth that will turn this great little trail into a forgotten mess:

You can always tell when you're getting closer to the swamp as the biggens start showing up in earnest trail side:

There was a couple at camp looking to make an afternoon fire when I arrived for a detour to some of the biggest cedars in the swamp:

I tried to make good time getting back to the TH over the next 6 or 7 miles passing a very friendly couple and their happy four legged trail friends at Whiskey Creek. The creek crossings werent bad and Casey Creek was still pretty much dry where the trail crosses it. Nobody camped at Casey Creek and no one at Herman Camp either. The clouds kept playing on and off as I hit the oak meadow towards the end of the trip:

All in all another great day out in the mountains. Watch out for Poison Oak on the 400 trail and lingering snow in the higher elevations.
Top

Noticed a bit of snow has stuck around looking towards Silver Star and behind Hamilton/Hardy
ridges towards 2 Corner Rock, hope it goes away soon...
Top

Thanks for Sharing the TR. I was planning to do some recon hiking in the Tanner to Wahtum to PCT Area or Starvation to Wahtum & back but my plans got all snaggled over

I guess they would have been snaggled over if I would have went also, or it would have been another Recon adventure finding my way in the snow. I did not expect to see so much!
Shoe Shine Boy Has Left The Building!
Top

Thanks for posting the photos, this gives me a better idea what to expect tomorrow for Defiance and Bear lake. Looks like the weather wasn't too bad either, any day without pouring down rain is a good day.
Top

Thanks guys. It seems to always hang around in there and make things a little slippery/slowed up. Still want to do that death march reunion with crus and company if you guys are ever open for it.

No problem Withers. I agree on the weather sentiment and wish I could make it to the group hike tomorrow. Hope everybody has a good time out there

Love the flowers! But wow, that's a lot of snow still.
--Kathleen. Or K-Mac. As in KMC, because that's what people have taken to calling me here. :-)
Top

I clicked this thread Sean, to see if I could call ya on not finding an amphibian, Fail

Great TR. Thank you so much!

These tracks have me scratching my head. I'm wondering if someone out there can answer what they are? I'm looking at it thinking there's a deer or elk on the left with an I-don't-know on the right. The size and shape remind me of cougar kinda, but I thought cougar tracks are shaped more like an "m". Also I thought cougar ( or any cat ) tracks do not have claw marks. They retract them when they walk. Maybe it was a large dog?

Cool Sean! That's one whopper of a hike. I was inspired by this TR to go hike a little ways up Herman Creek yesterday.


Sean Thomas wrote:Still want to do that death march reunion with crus and company if you guys are ever open for it.

haha I'm not in shape for that yet, but hopefully I will be later in the year. Mayhem would need to bring his SPOT device along in case he needs to call in the rescue squad.

haha well I didnt spot it so much as it spotted me and ran for cover.

I agree Dan. Im not sure what they were either for all of the reasons you listed.


Awesome Crus. Herman Creek never fails as a great choice! Not sure mayhem still has the spot thing tho?
Top
Post Reply
12 posts