One of may favorite loop hikes - deep forests, vast views, good trails - particularly for this most bluebird of recent days. Left the Trapper Creek TH and almost immediately turned on to the Dry Creek (194) trail. This is a very gentle, well maintained trail, with occasional views of Dry Creek. 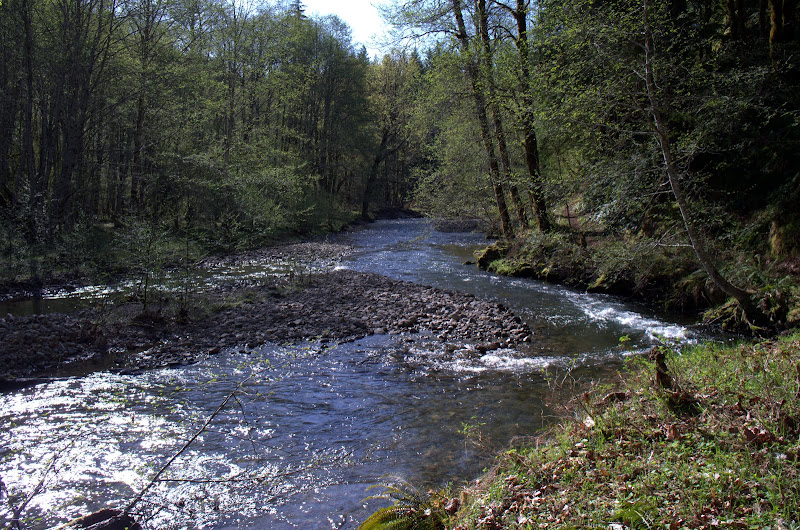 After a little under 4 mi, I came to the Big Hollow (158) trail and took it toward Observation. This trail was in good shape except for a number of blow downs at about 3000' - nothing big, just nuisances. The trail was largely snow free until about 3200' - then everything was snow covered from then on. The snow was firm, very walkable, with no post holes. 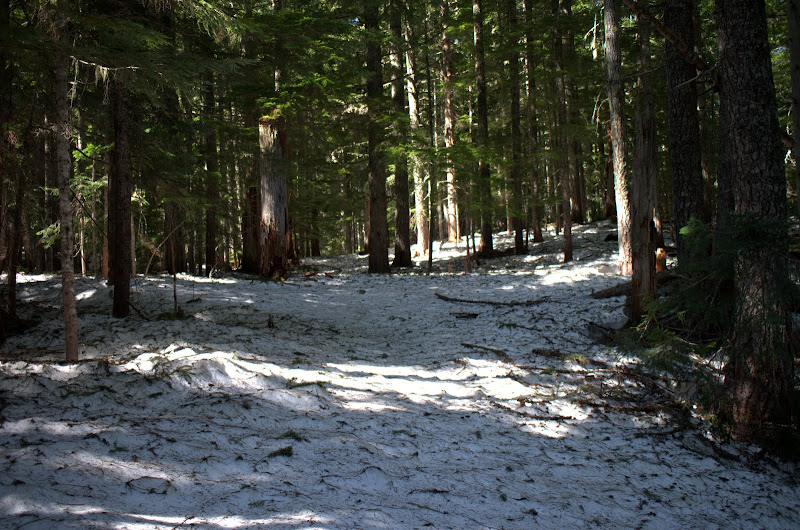 During past early season trips to Observation, I generally followed where the 158 trail was supposed to be, which took me to the ridge E of Observation and made me sidehill on snow to get over to the peak. This time, taking advantage of the snow covering all the underbrush, I went straight up to the ridge. Steep snow in places but it was ideal for kicking solid steps. Probably cut a mile off the climb and brought me to the snow covered summit just in time for an early lunch. 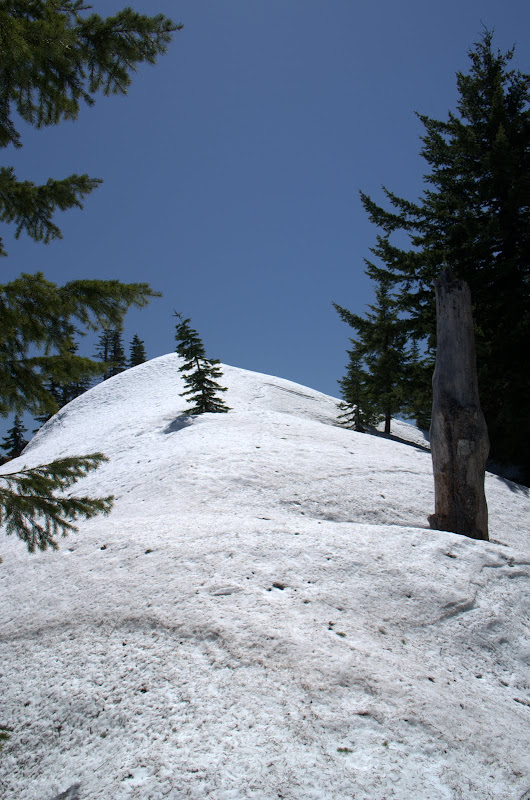 After that it was all about the views. The entire Indian Heaven range was visible (R: Red Mtn, B: Berry, G: Gifford, E: East Crater, L: Lemei, S: Sawtooth). Still a lot of snow back in there. 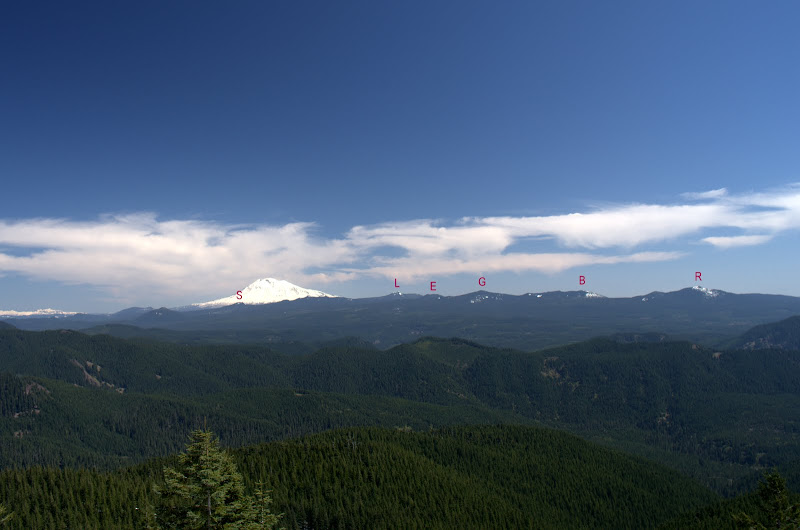 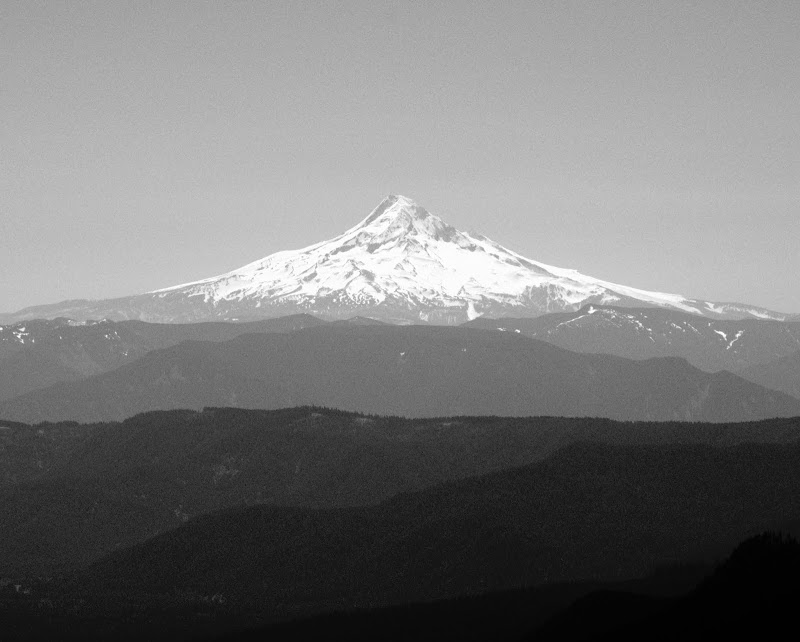 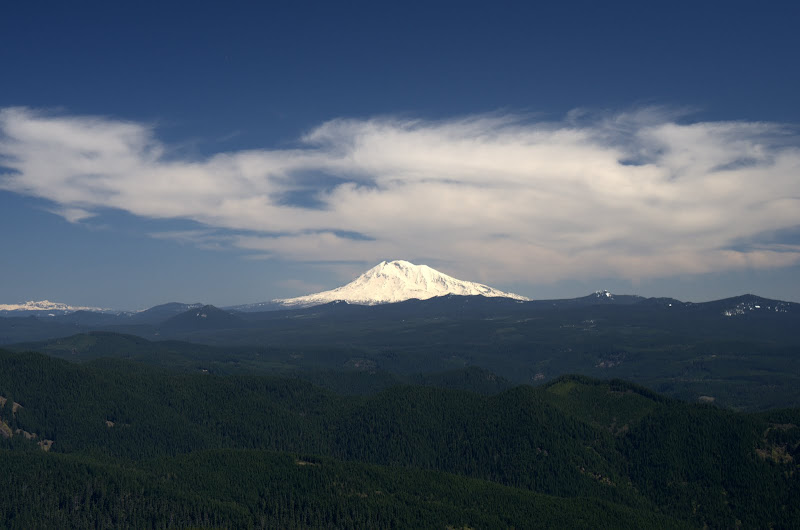 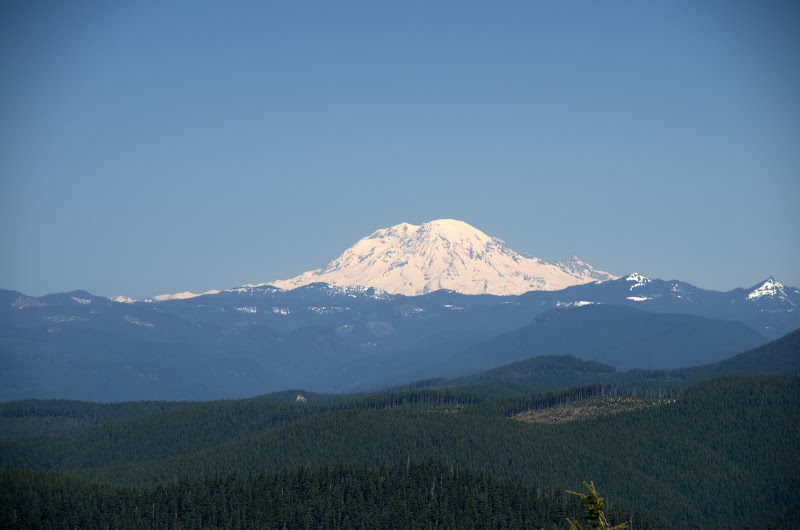 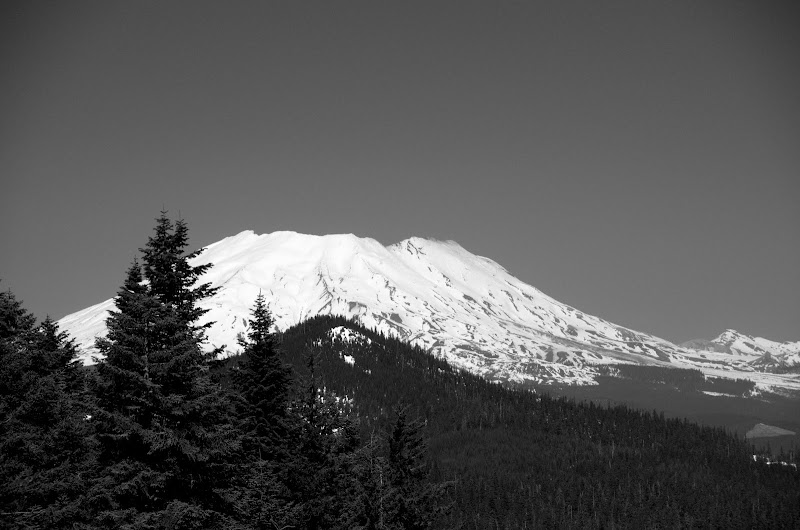 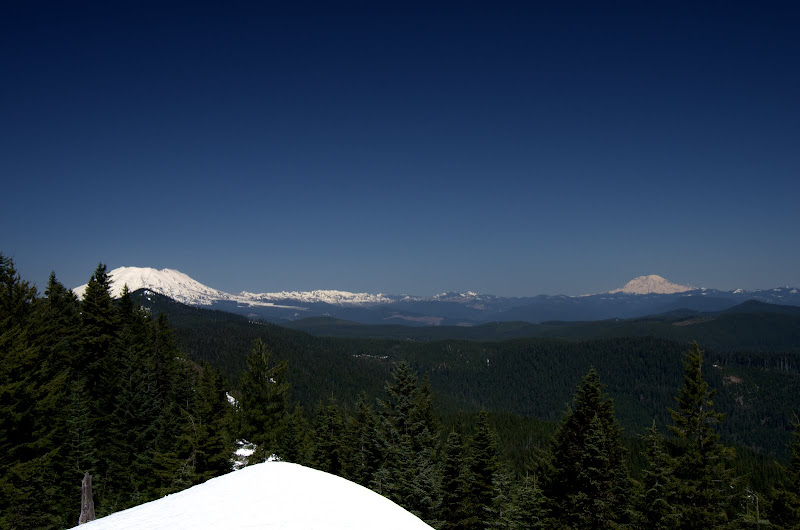 and then Rainier with Adams. 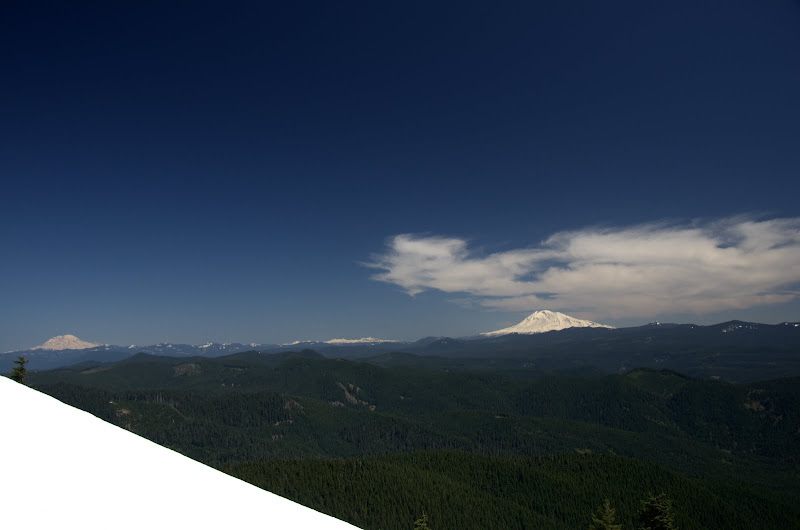 Last, but not least, the little lookout on top of Red Mtn at the S end of Indian Heaven. 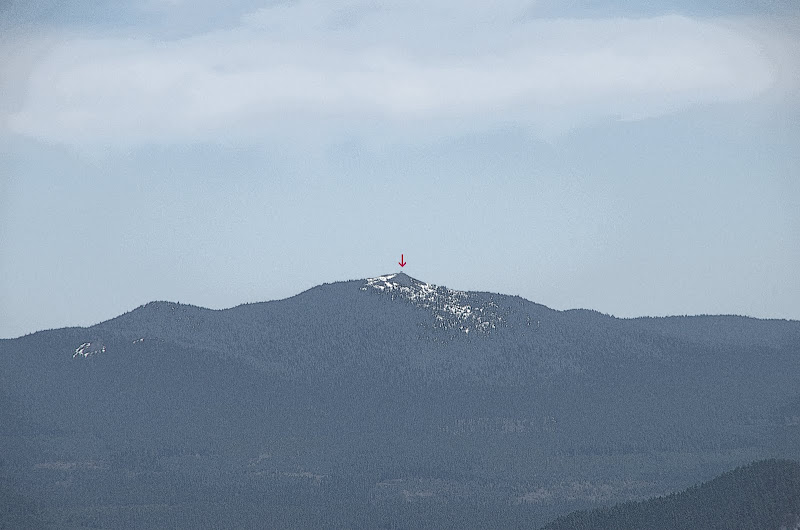 Then it was down the SE side of Observation - Thum's Cut-Off - to intersect the 132 trail where it crosses Howe Ridge. Mixed snow and fallen limbs on the 132 until about 3400', then just fallen limbs and small trees. Again, just a nuisance. About half way down I encountered a Skamania County Jail work crew clearing the trail (beats sitting in a cell) and, after that, the 132 was a freeway! At the waterfall, I put down my trekking pole to take a photo only to have it siezed by a butterfly. 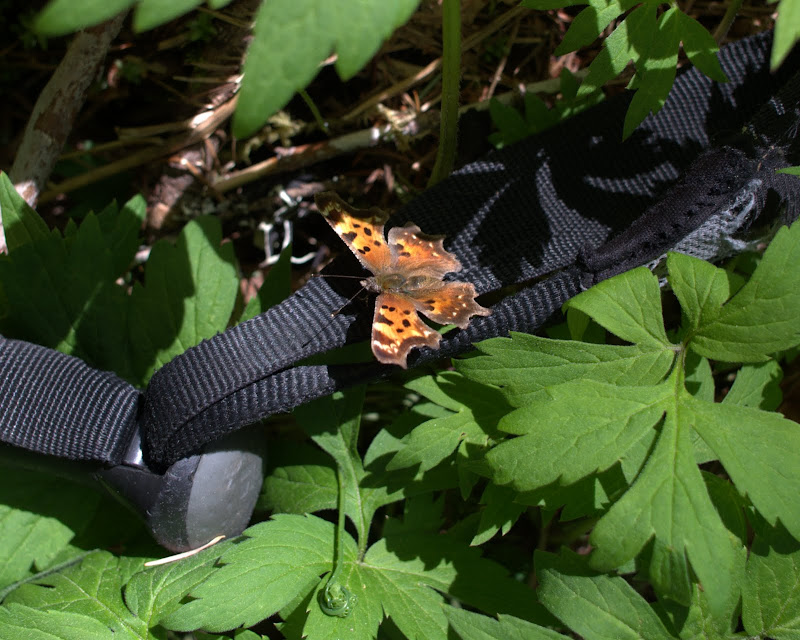 Further down, the 132 crosses some creeks, which were a welcome relief on what had become an actually hot (or "unseasonably warm") day. 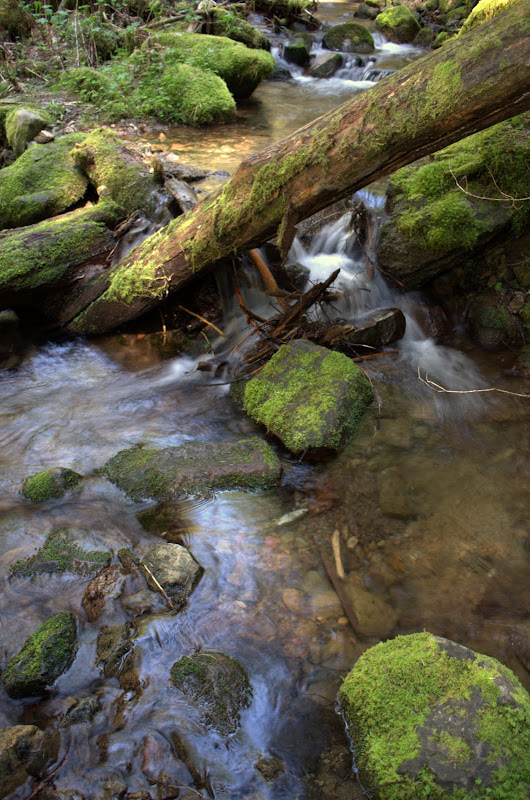 And then it was over. One of those days you dream about all winter. 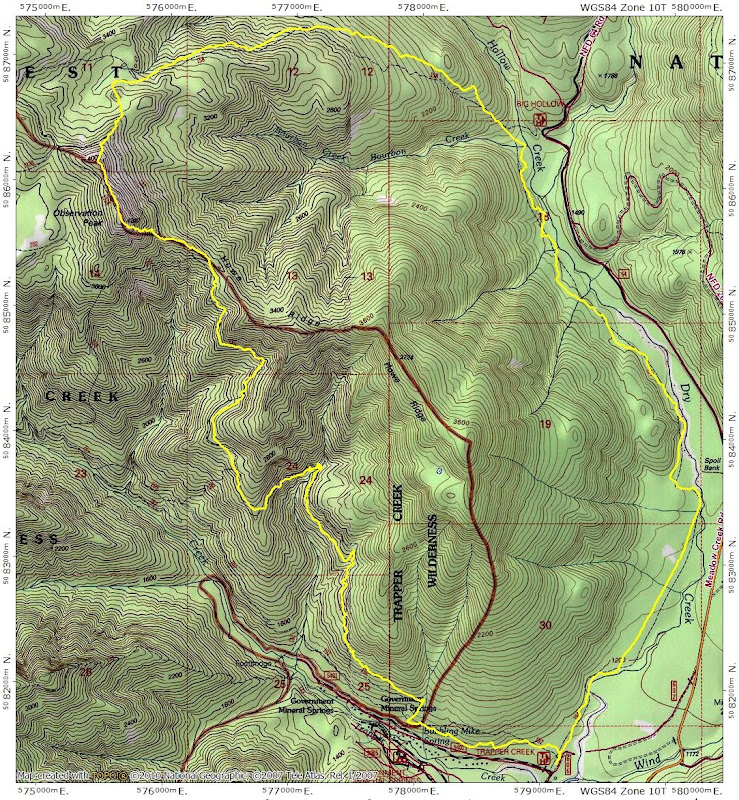