With the bluebird of good weather back in town for a bit (there's Junuary ahead!), it was time for my annual hike in the coast range. Crusak's fine TR (King) inspired me to do something similar but in the opposite direction. So I left the King TH and headed E on the Wilson River Tr, passing the "ford" over Dog Ck, 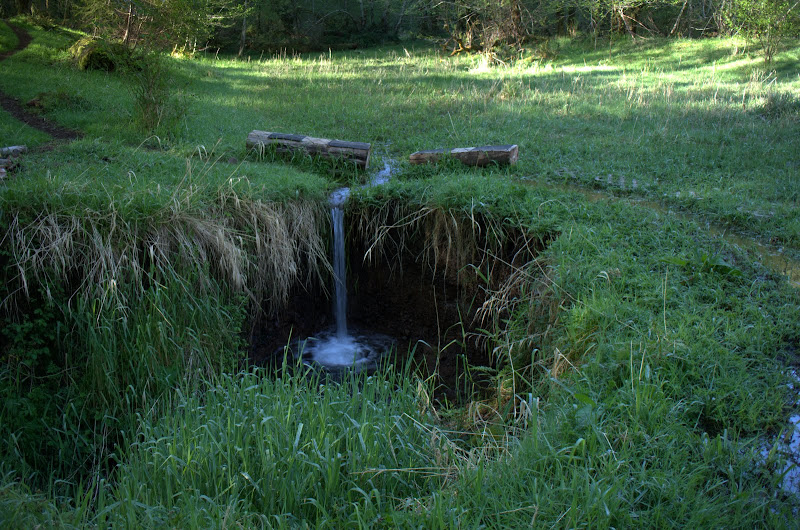 then over to Elk Forest Park and the trail up Elk Ck. A flood in the early '90s wiped out the lower part of the road, so now it really is mostly a trail all the way up to the ridge. 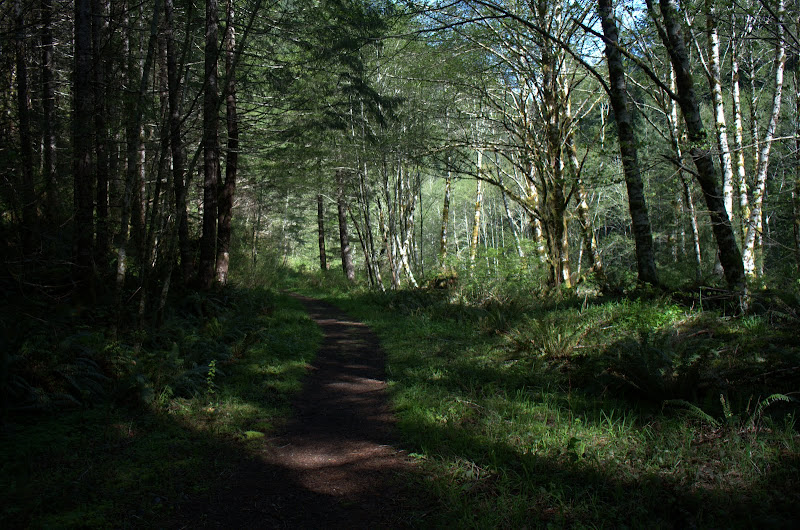 Full bluebird conditions on the Elk. 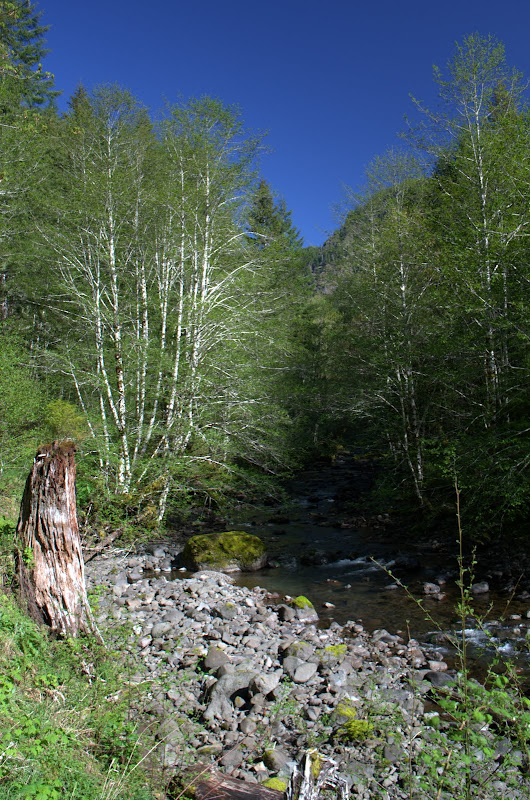 At about 2400' feet, the National Geographic topo maps show a "road" going straight up from the Elk Ck Rd to the trail coming over from Elk Mtn. Sure. Way back in the day it might have been a log skid but that was 75+ years ago. Now it's a gully filled with loose dirt and slippery ferns. So, of course, I had to see where this "road" went. Straight up to the top of the ridge - pretty easy except for the headwall in the last 50' which required extensive vegetation belays. It's hard to tell looking down from above but note that I'm standing on a cliff even with the tops of the trees. NOT A ROAD! 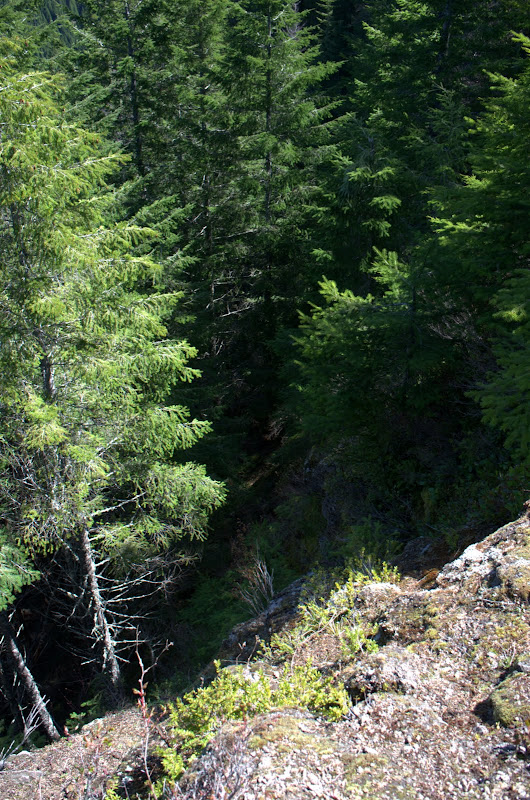 After that it was E toward King on the trail. 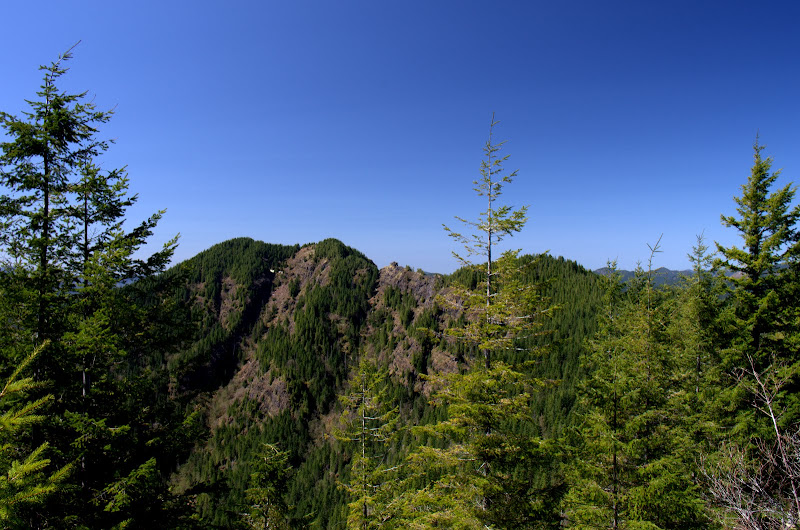 The trail on the backside of King was entirely snowfree and in good condition and in no time I was just below the summit of King taking in a cloudless view of Hood and Adams, with Elk in the foreground. 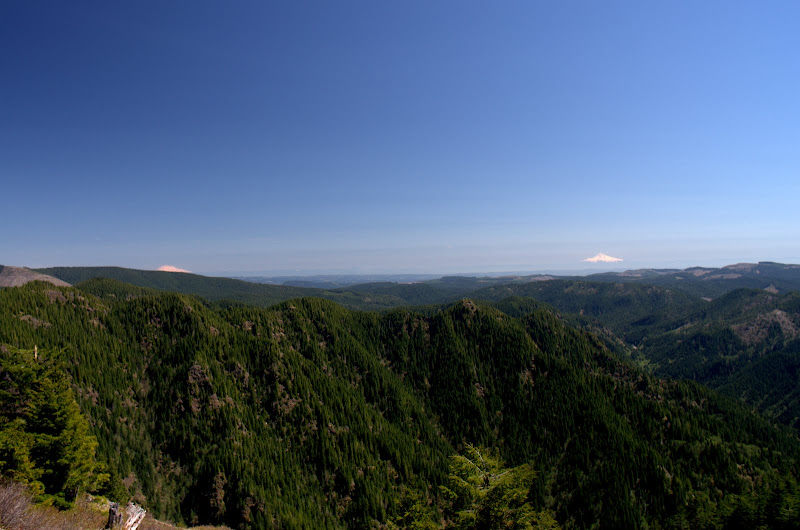 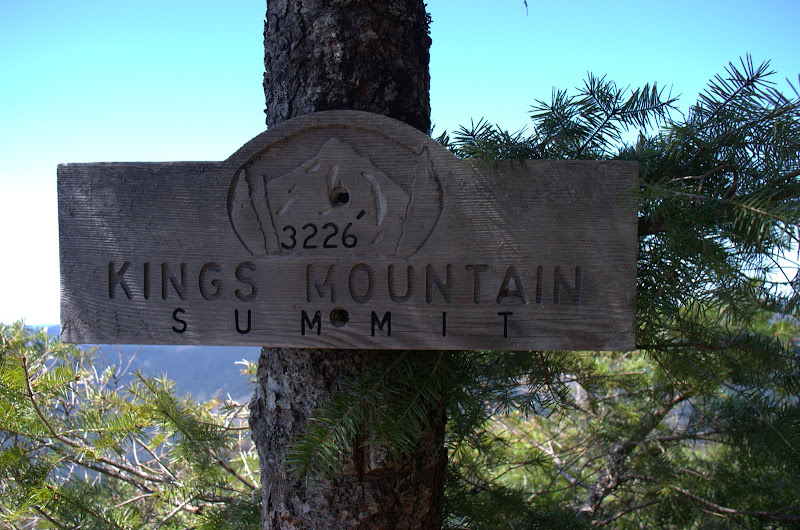 with its view of a lot of clear cuts. 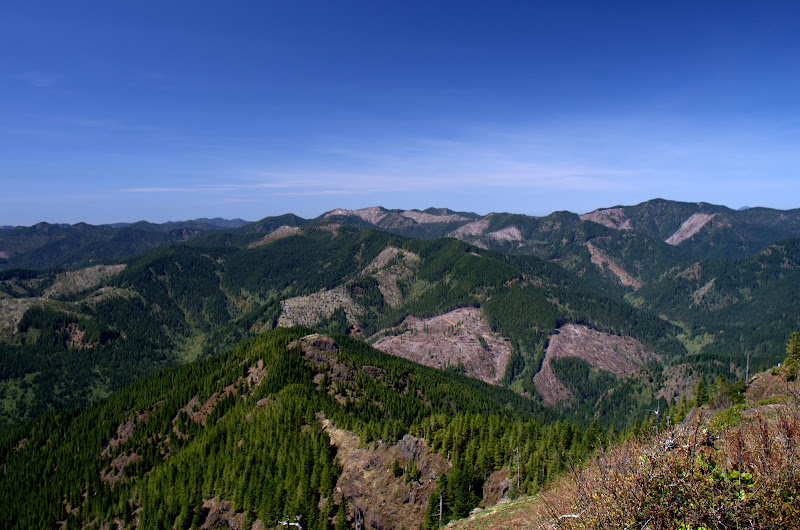 Then down over King Jr to the Wilson trail and back toward the TH. Along the way who should I meet - yes! - Mayhem himself! I finally learned how he takes those self-portraits but held off asking for an autograph. 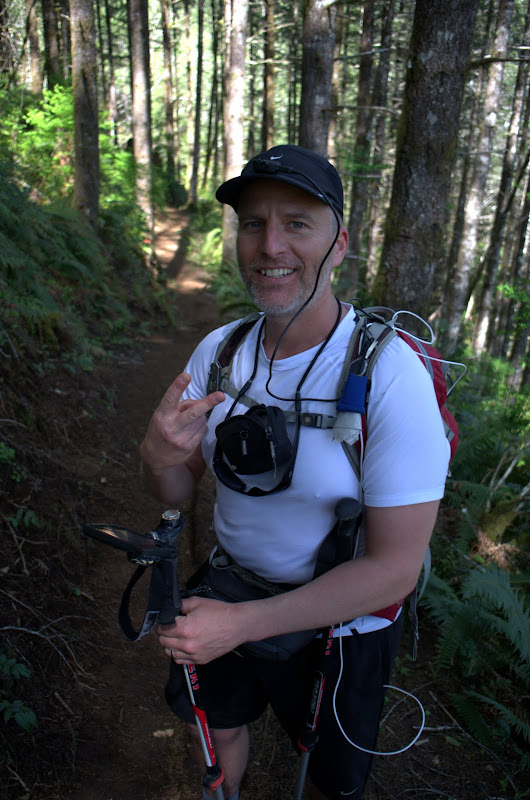 He headed up for views and pictures and I continued on to the TH, reveling in the warm sun, pleasant breezes, and scenery. 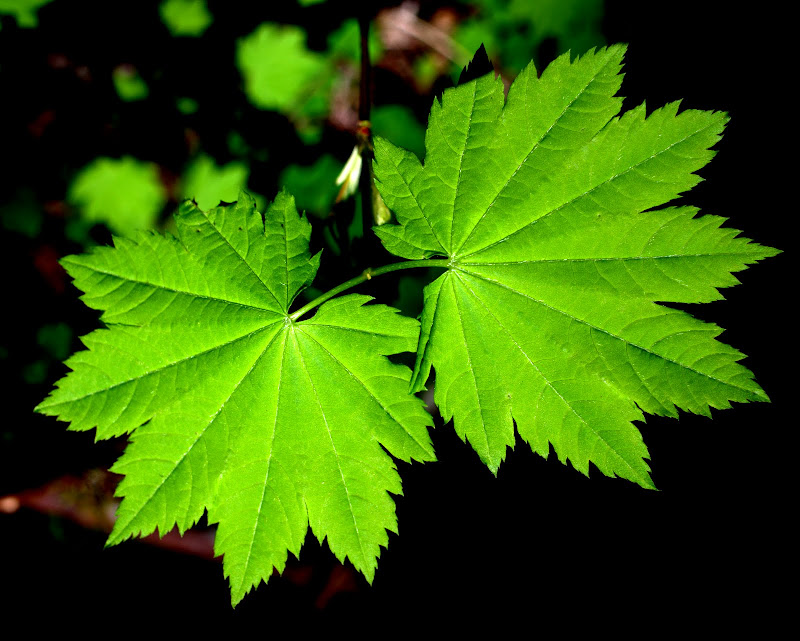 A slight variation on a classic hike (13 mi RT, 3100' EG), with optimal weather, and a chance encounter with a hiker whose avatar is synonymous with Kings Mtn. Great day! 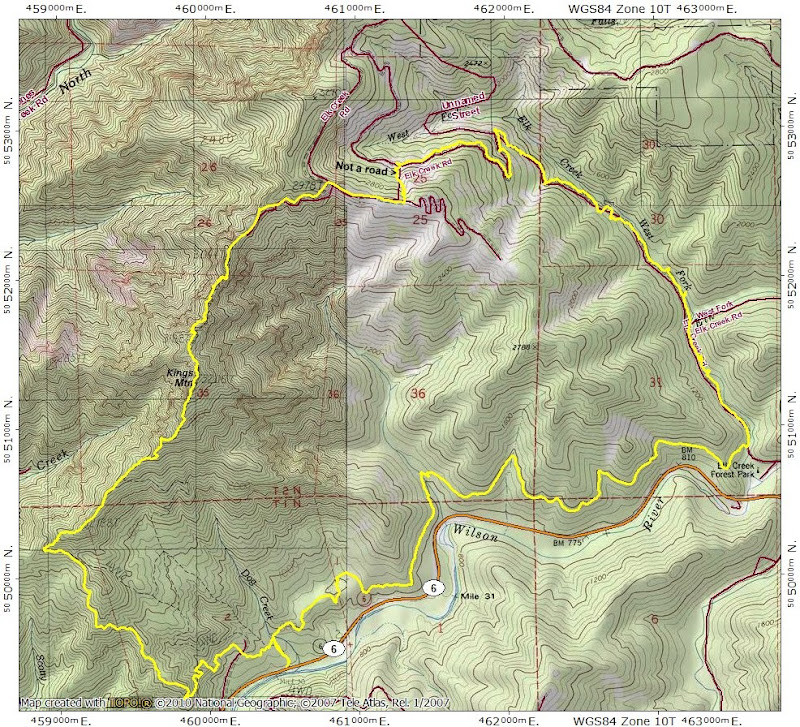 VanMarmot, yes! I marked waypoints at the top and bottom of that road/log skid before that last hike there, and we stared up the hill for a long time at it, wondering why there was a road on the maps. Nice that you also noticed, and investigated! You even went one step further - you crawled up that slope. I was contemplating doing the same on a future hike.

BTW for those of you who aren't sure of what we're talking about, this is the road - circled in green:

Great TR and pics as usual, VanMarmot. Oh, and it's hard to not have a Mayhem sighting over there.
Jim's Hikes

Wow, what a great day you had out there! Not sure how the conditions could've been any more perfect.

Not to mention, a fist bump from a friend! Nice...

Jim was mighty curious about that road to, well, who knew? It really didn't look like one, at all.

Anyway, his curiosity seemed to infect my GPS! As you no doubt felt yourself, there was an incredible pull up that mystery road! Check it out:

100% unedited track, as downloaded after the hike.

kepPNW wrote:Wow, what a great day you had out there! Not sure how the conditions could've been any more perfect.

Not to mention, a fist bump from a friend! Nice...

Jim was mighty curious about that road to, well, who knew? It really didn't look like one, at all.

Anyway, his curiosity seemed to infect my GPS! As you no doubt felt yourself, there was an incredible pull up that mystery road!

Karl, that's an impressive track - almost looks like you went up & down that "road", or did you tape your GPS to Jim's pack and ask him to check it out?

Found a tick but didn't see the ocean.

I swear to... yeah! At the end of the hike, my GPS showed nearly a mile more than Jim's. I know the Oregon tends to keep moving, even when I stop, but that was ridiculous. Then, I got home, downloaded it, and *BAM*!

We had been watching our GPS's, so we'd know where this "road" was. When we got to the bottom of it, we did stop and stare up the gully, wondering "WTH?" for awhile. But then we just moved on. Well, we humans. The GPS went for a little bonus excursion.

VanMarmot wrote:Karl, that's an impressive track - almost looks like you went up & down that "road", or did you tape your GPS to Jim's pack and ask him to check it out?

Definitely an adventure! Especially the XC descent after that quick scramble up you'd replicate just a few days later, yeah! My GPS really knows how to get around.

Ya gotta wonder if "similar forces" were in play when that "road" was initially laid out?

I was walking down road 777 from where the Tanner Butte trail starts.

I was walking down the road towards my car, but the GPS track showed me walking up the road. I could have been confused, but that was a familiar route so I just continued. After a while, the GPS track snapped over to where I was really walking.

Yeah, I've had weird random stuff happen before. This one was just extra weird. (One time, following Multnomah Creek upstream, the track jumped over to SR-14, and followed it precisely for nearly a mile, before hopping back across the river! WTH?)
Karl
Back on the trail, again...
Top

We should call the old skid the Van Crusack Trail. That shot of Hood and Adams with elk in the foreground is one of the best i've seen from range to range, awesome job!
Top

Really nice photos and a great report, too! You know, I must admit, I've never done the full Monty there. Only the out-and-back up to Kings. I feel guilty!!!!