It wasn't going to be a full bluebird day but the rain was supposed to hold to the N (it did), I had the time, and I wanted some exercise, so I ginned up a loop from Multnomah Falls over to Oneonta and back via Devils Rest. Mine was the only non-employee car in the lot when I left the Multnomah Falls TH and headed up to join the Gorge (400) trail. Sad to say there's a lot of trash along the downhill side of the paved "trail" and massive evidence of switchback cutting on the uphill side. Is this what it's like to be loved to death by idiots? 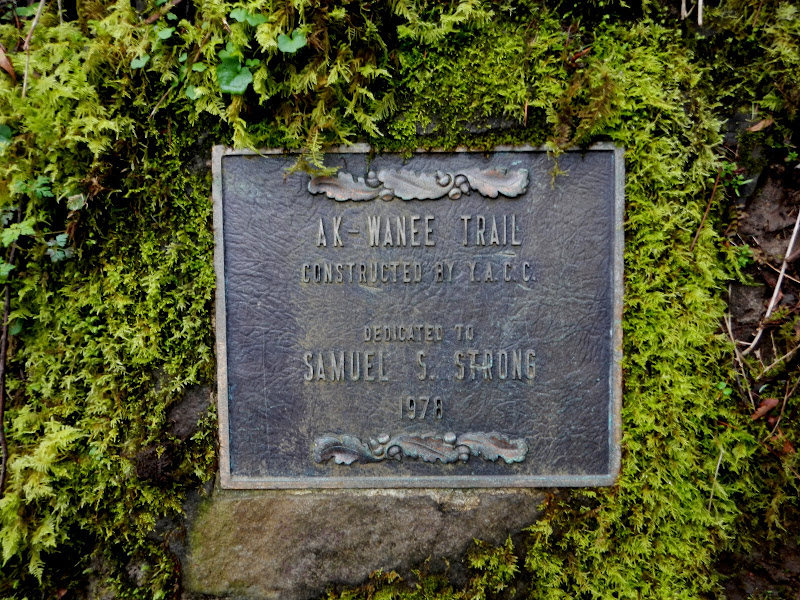 The 400 took me E to Oneonta Gorge, where the 424 trail took me past Triple Falls, 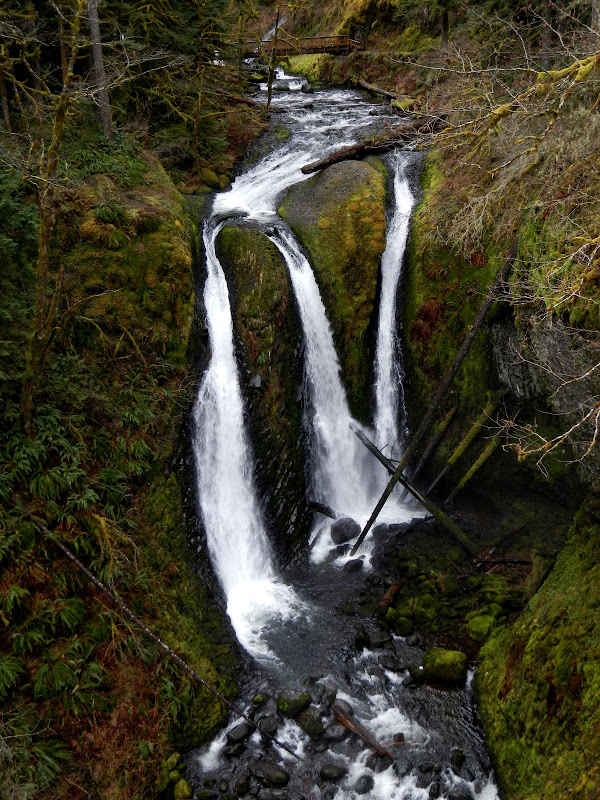 up past boulder fields reminiscent of the Elevator Shaft, 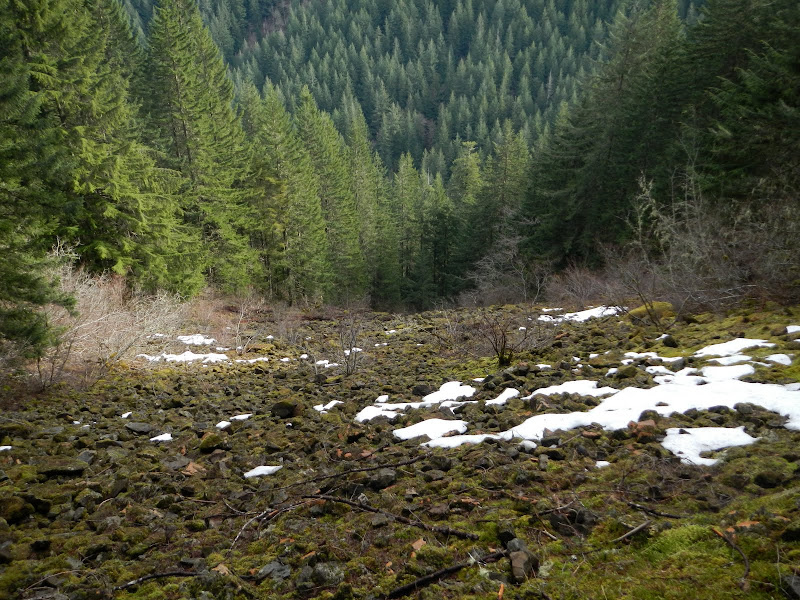 and through the trees to a junction with the Franklin Ridge Trail (427). The only snow worth mentioning on the whole hike was on the 424 within a half mile of the 427 junction. 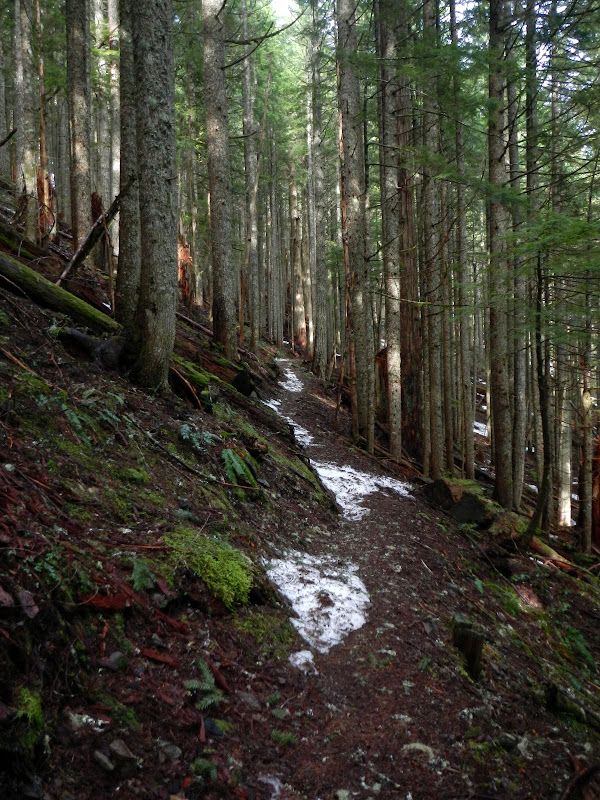 Then it was down Franklin Ridge and up the Multnomah Basin road to the view point below Devils Rest, pausing to admire some tree fungus enroute. 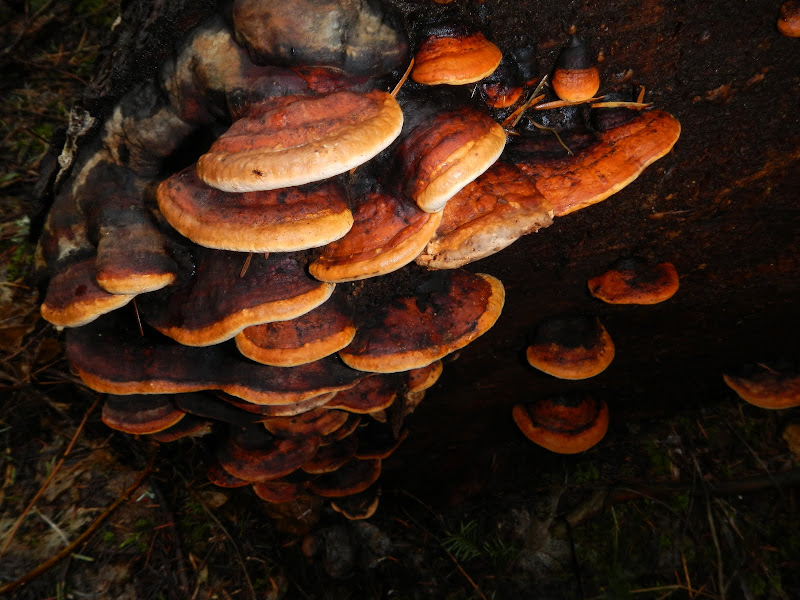 It was still overcast, but the clouds had lifted enough to give me a view of Silver Star (note dead calm on the Columbia), 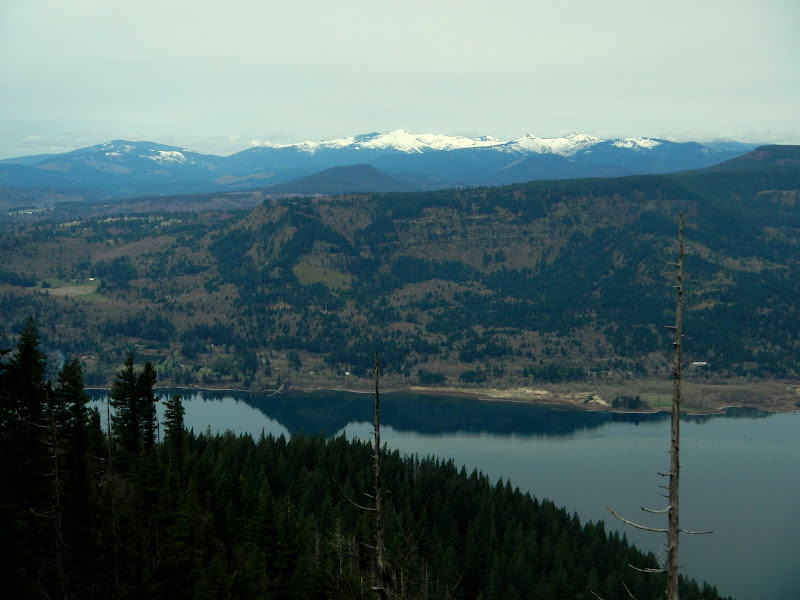 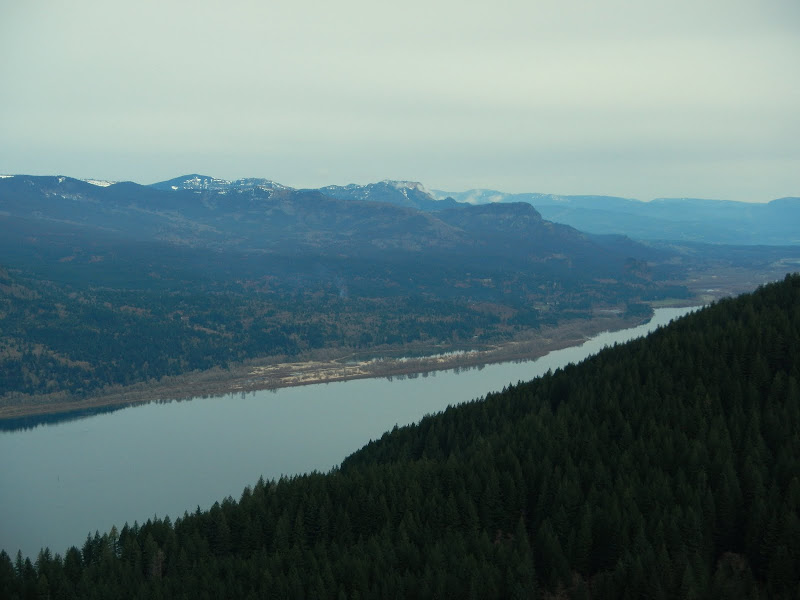 Then it was back to Multnomah Falls via Wahkeena Falls in early afternoon sunshine - the gray jay having departed (briefly). 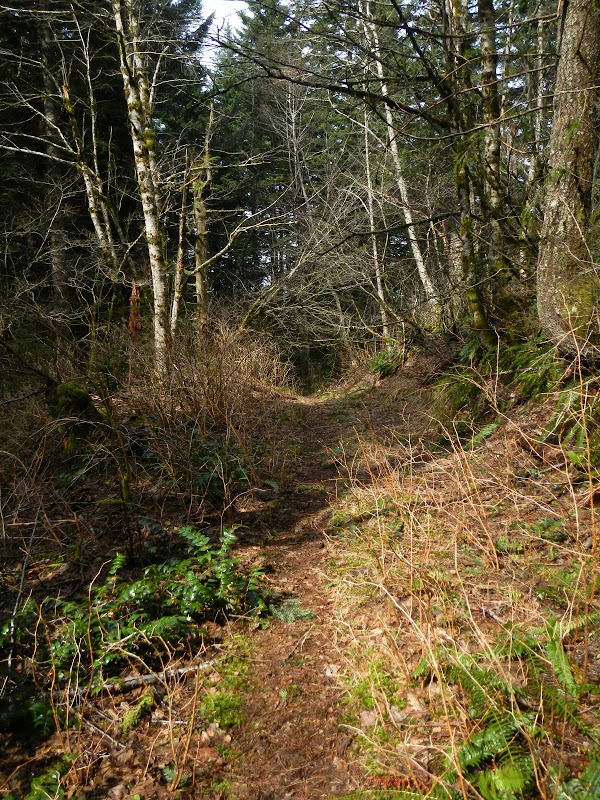 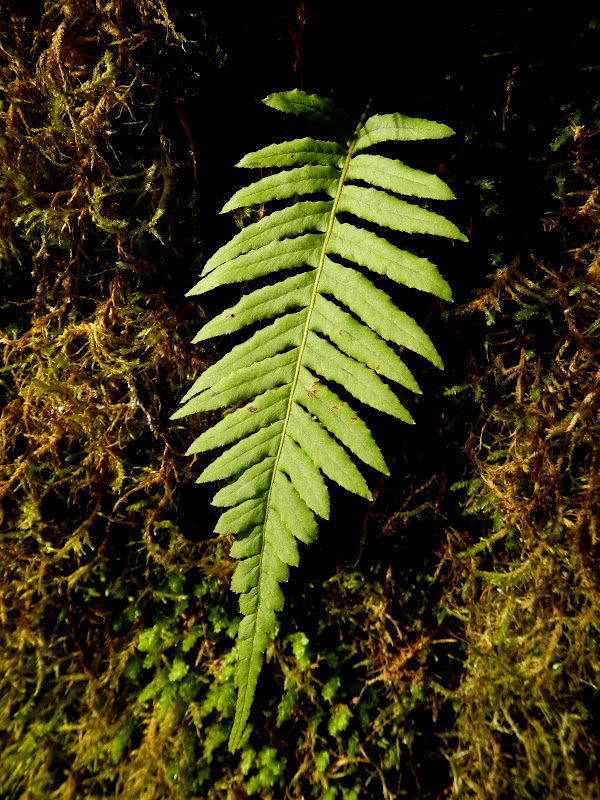 Mine was no longer the only non-employee car in the lot but things still weren't "summer weekend" crazy. 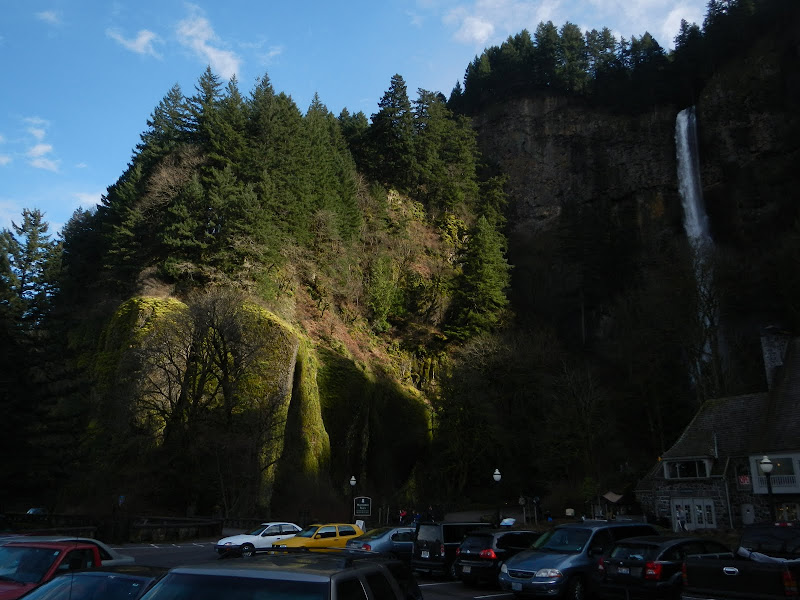 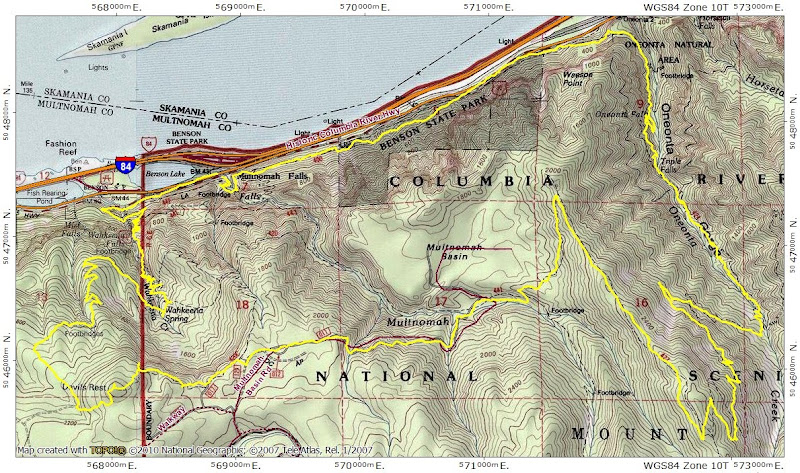 The TH area aside, only saw 2 people all day.

Surprising that you only met 2 people - I guess that your early start contributes to that. I had expected that you did not drop by Bickel's Point for lunch on such a loop!
Some people are really fit at eighty; thankfully I still have many years to get into shape…
Top

Nice loop idea. I spend a lot of days making loops using those same trails. Though I've never gone clockwise from Oneonta. That really is good EG. And then you kept climbing up the 129 Rd! Nice economical way to pack in a good distance hike, especially if the drive is short...

Thanks for the TR!
Top

Bruce! You just gave me the perfect idea for a loop hike tomorrow. I'll have to put your hike at the top of the list now.

For a non-bluebird day it looks like you had great weather! So the snow is a non-issue up there now? Good news.

Thanks for the loop idea and the great TR describing it.
Jim's Hikes

Crusak wrote:So the snow is a non-issue up there now? Good news.

I hiked up to Devils rest yesterday. A bit of snow, but the trail is well worn. Actually the mud was more a bother than the snow

Crusak wrote:Bruce! You just gave me the perfect idea for a loop hike tomorrow. I'll have to put your hike at the top of the list now.

For a non-bluebird day it looks like you had great weather! So the snow is a non-issue up there now? Good news.

Thanks for the loop idea and the great TR describing it.


Hey there Crusak.
Yesterday (3/24) I hiked the Oneonta Trail up to the Franklin Ridge Trail intersection. Snow is definitely an issue up on Franklin Ridge right now. About 6-10 inches or so (but melting fast). Snow starts at just around 1400 feet. The Oneonta Trail up to Franklin Ridge is entirely tracked out. Looks like the Franklin Ridge Trail was tracked out pretty good as well. Don't bother following my tracks towards the Multnomah Spur Trail. I gave up looking after about 5-10 minutes.
The Ridge is so peaceful and quite right now. Great time to visit.
Hope this helps.
Have fun

I'm not completely new to Portlandhikers.org, as I joined in 2010, but I don't usually post here (I'm on BPL quite a bit). Anyway, I did this loop today (March 31), basically copying your hike. It was a great day to be in the Gorge, thanks for your helpful photos and information.
Top
Post Reply
8 posts • Page 1 of 1