After getting a taste for the roads behind Devils Rest last month (Palmer Rd TR), reading Jack’s informative TR about conditions on Larch Mtn last week (Jack’s TR), and spending probably more time than I should looking at maps, a plan for a big loop over Larch Mtn emerged. I left the Wahkeena Falls TH under low clouds into what would be a graybird day, all day. 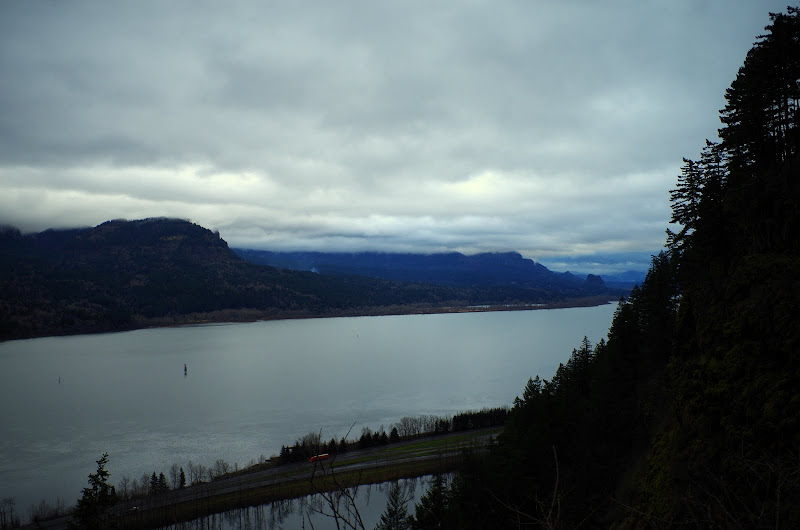 Fairy Falls were going nicely as I passed them on the way to the Devils Rest (420C) trail. 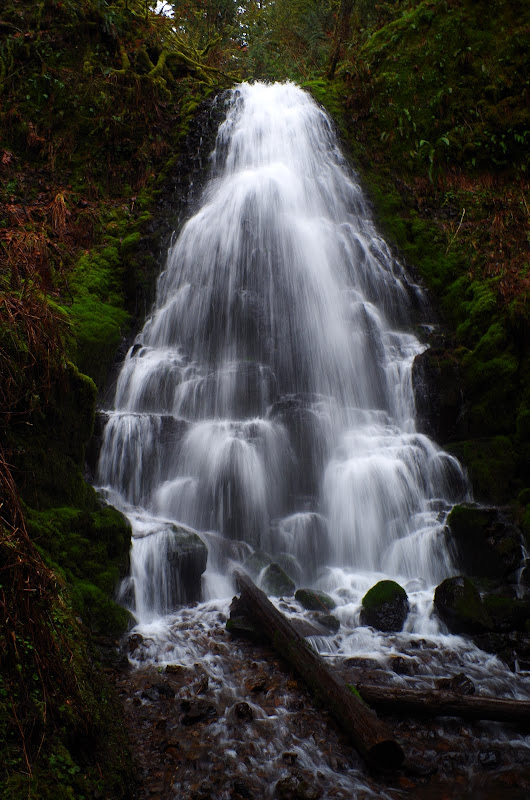 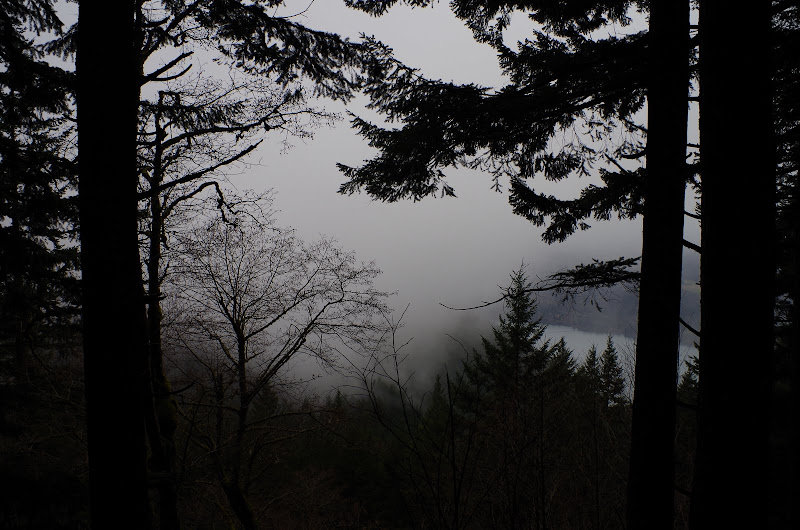 The trails to this point had been entirely snow-free, but that changed once I reached Rd 129. 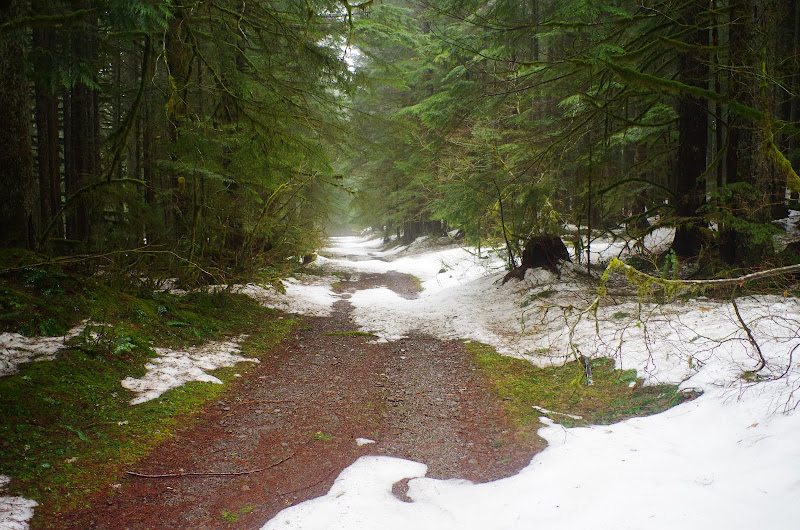 I took Rd 129 S to its junction with Rd 1520, and continued S on Rd 1520 through ever deepening snow. The snow shoes went on here and stayed on all the way to the Franklin Rdg / Oneonta Ck trail junction on the other side of Larch. 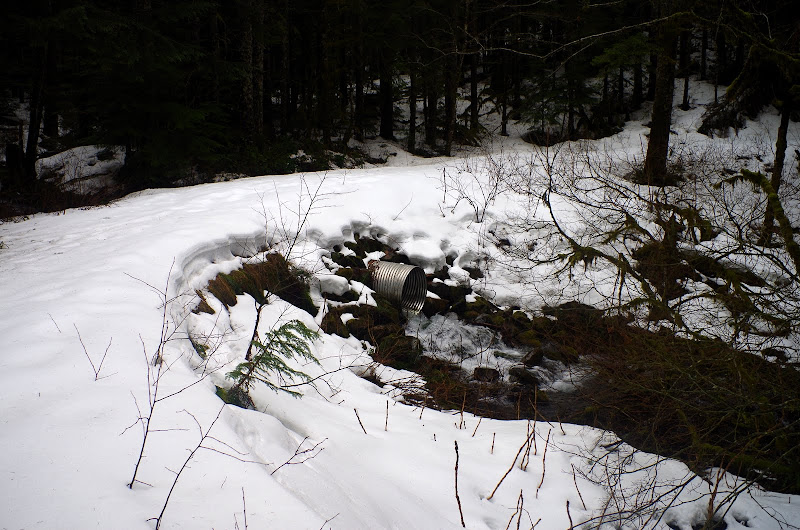 After about a mile on 1520, I left it and went briefly XC to intersect the Larch Mtn Rd (Rd 15) near MP 10. This road is, of course, completely snow-covered. 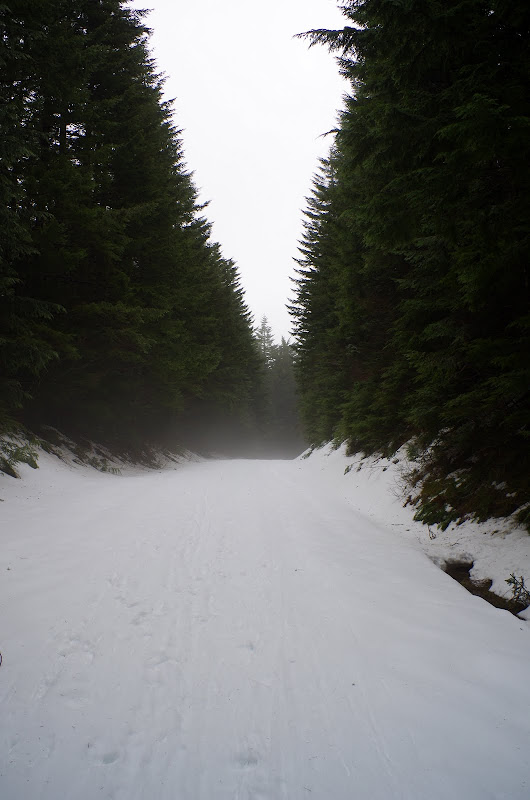 I proceeded up the road and then cut over to the Larch Mtn trail (441), which I took to Sherrard Point, 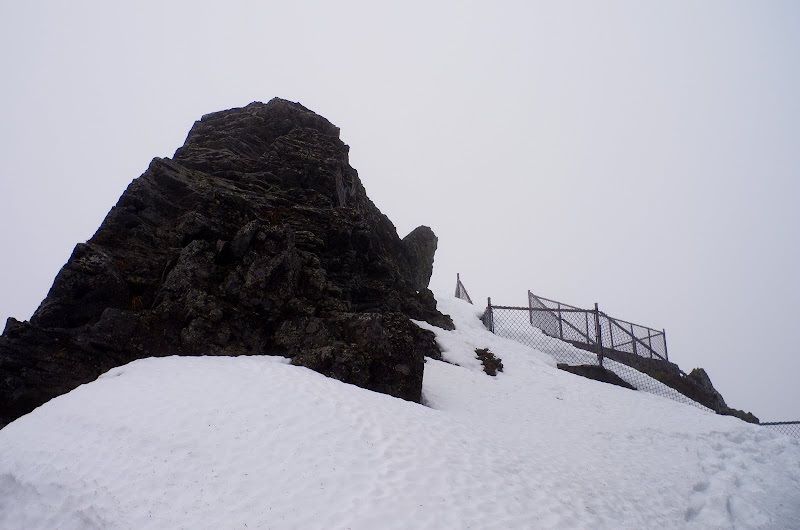 which was not forthcoming with “views” today. 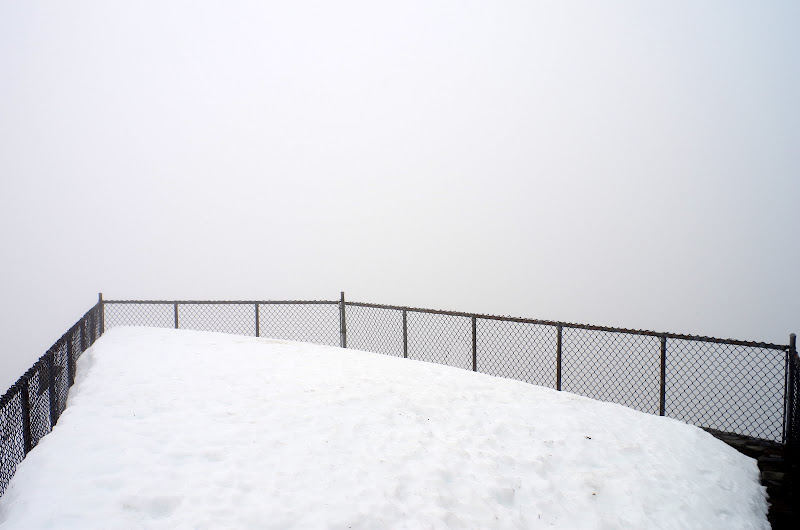 After a quick lunch, I headed through the Larch Mtn parking lot, which, although a sea of largely untracked deep snow, 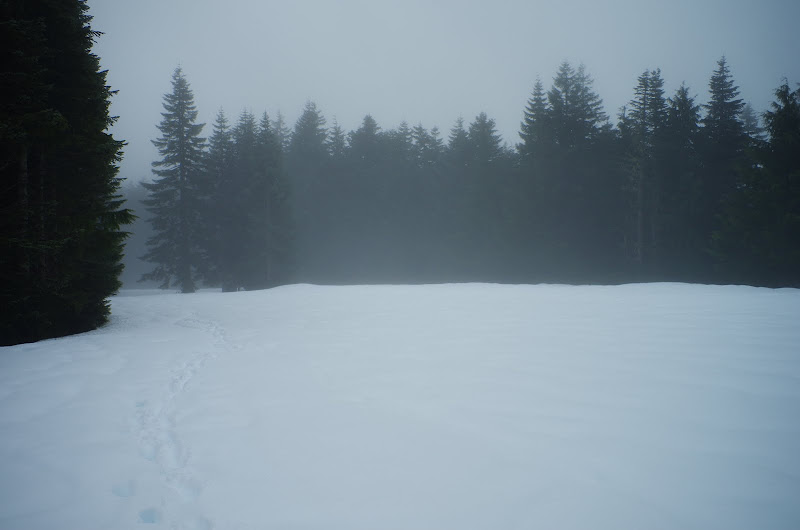 still provided an opportunity to pay. (I'd followed a set of posthole tracks up the 441 - these holes continued, getting deeper, across the parking lot and down the road, presumably back to the snow gate. If so, it was a pretty serious workout!) 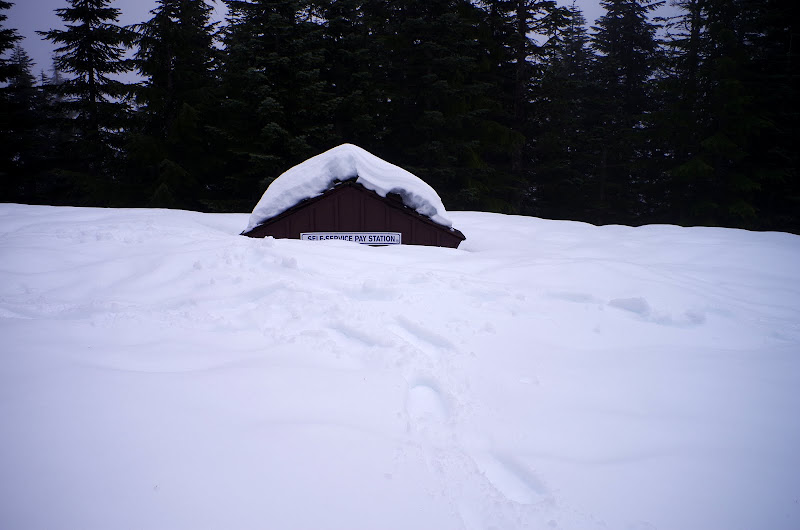 The route from the Larch Mtn Rd / Tr 424 junction over to Franklin Rdg was all XC on untracked snow. The GPS came in real handy here. I hit the Oneonta / Bell Ck trail junction spot on, 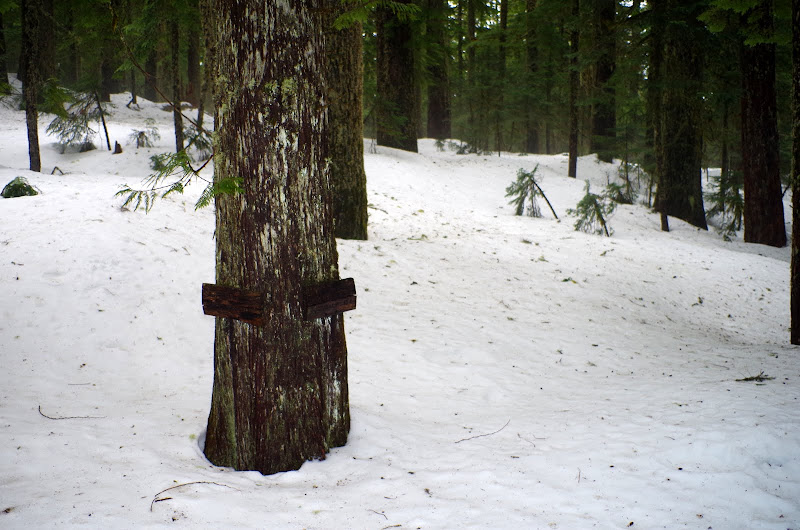 in snow that was at least 4-5’ deep, as evidenced by this view of upper Oneonta Ck. 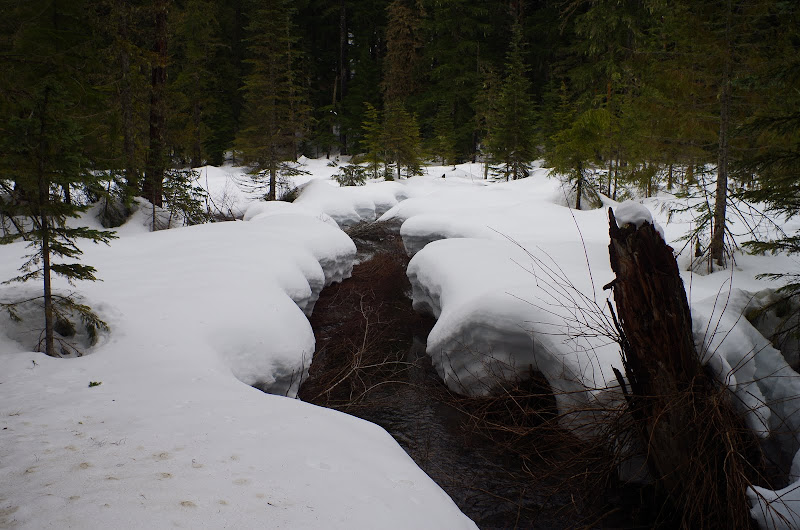 Another tributary of Oneonta Ck had to be crossed, 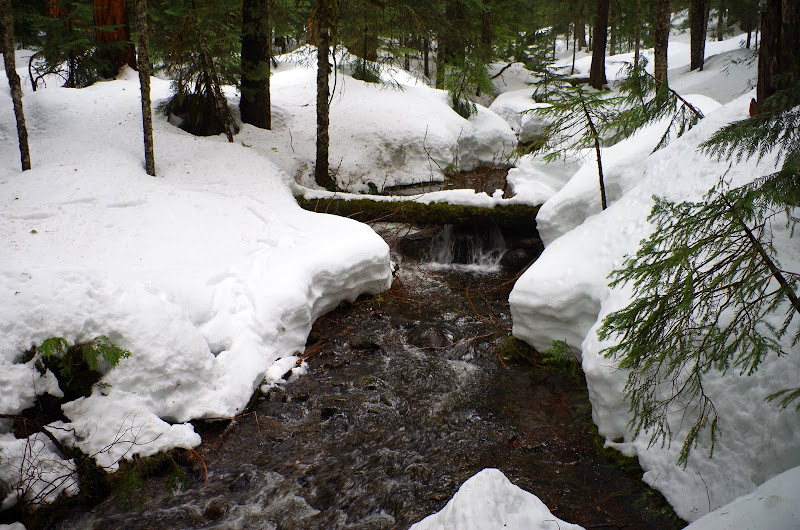 enroute to Franklin Rdg, where the snow finally abated and the snow shoes came off. Then it was down the Franklin Rdg and Larch Mtn trails to above Multonomah Falls, where a brief trip through h*ll (My boots are good, but I feared for their immortal soles.

), provided a less cloudy view of the Gorge and a shorter return to the TH and my car. 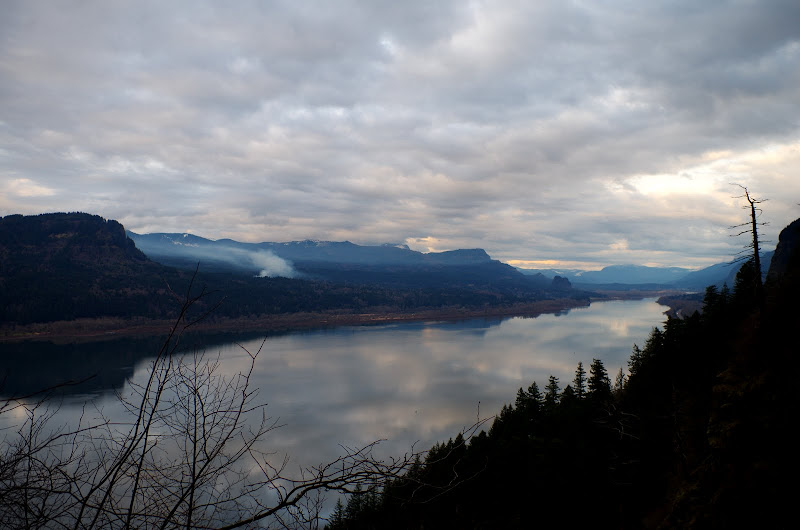 This was a slightly longer (17.5 mi RT, 4200’ EG) way to get to Larch Mtn than out-and-back on the Larch Mtn Tr (441) but the chance to explore the untracked winter landscape in the upper Oneonta Ck drainage (and that passage through h*ll

) were well worth it. 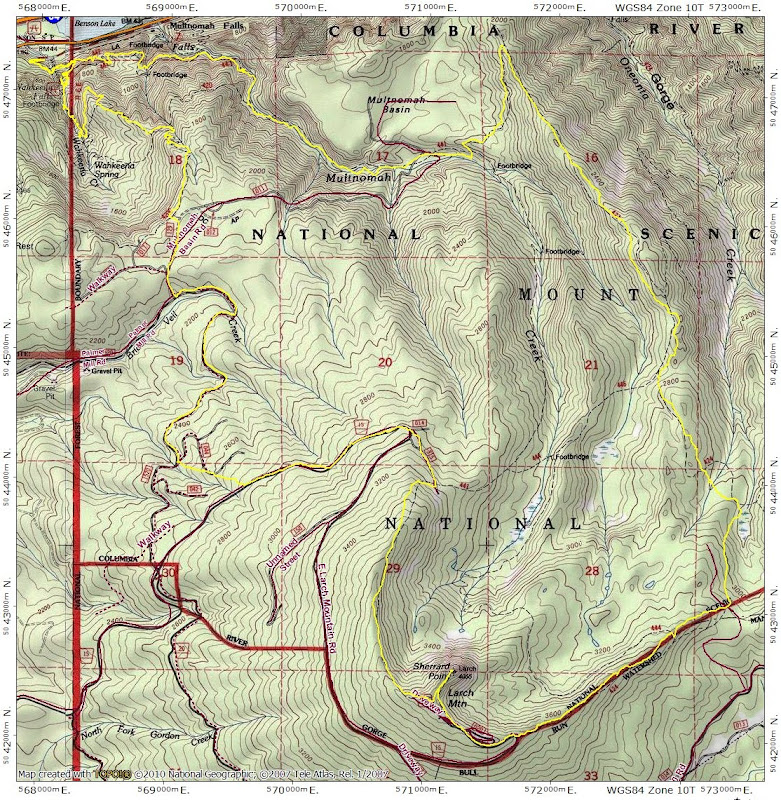 I really like that loop idea! Gotta keep that one in mind for "something different" someday.

And that last shot, with the reflections on the Columbia, is beautiful. I wonder what all that smoke is about, though?

Looks like a great day!
Karl
Back on the trail, again...
Top

Nice report! The roads around the Larch Mtn and Multnomah Basin area are on my list of things I want to explore soon. Doing them in the snow appears to be an excellent choice.

The snow doesn't look that deep until you compare it to the signs on the trees, and the channel of the creek. Still quite a bit of snow up there!
Jim's Hikes

Another remarkable loop creation, VM! Making your way through the upper Oneonta Tr., where the snow reallly piles up must have been a workout in itself. I can't even imagine doing the passage through "h" detour after covering those first 16 miles. I agree with Karl, I particularly like that last pic, among others. Nice TR!
Top

Jack wrote:Another remarkable loop creation, VM! Making your way through the upper Oneonta Tr., where the snow reallly piles up must have been a workout in itself. I can't even imagine doing the passage through "h" detour after covering those first 16 miles. I agree with Karl, I particularly like that last pic, among others. Nice TR!

Thanks! I always felt bad for having taken the "h" detour for granted - figuring it would always be there - so a quiet day in winter seemed like the best time to remedy my oversight.
Top

...a brief trip through h*ll (My boots are good, but I feared for their immortal soles.)

Excellent, Van! I do look forward to the day when eternal damnation is once again a legitimate hiking destination...

Nice....go there so often, was wondering about variable options. Thanks!
Top
Post Reply
7 posts • Page 1 of 1