I'd actually gotten to the start of Table Mtn last weekend but was turned back by low clouds, cold, and deteriorating road conditions. After a week in Miami at a technical conference where the air conditioning was colder than Mt. Hood, I was back for another go at Table. Forecast was for partly cloudy or partly sunny or both or neither - it would turn-out to be a bluebird / gray jay sort'a day. After parking at Bonneville Hot Springs, it was up the Dick Thomas (which is in excellent shape) to Carpenters Lake and then up to the PCT. A light dusting of snow had appeared by this point and it was still overcast. 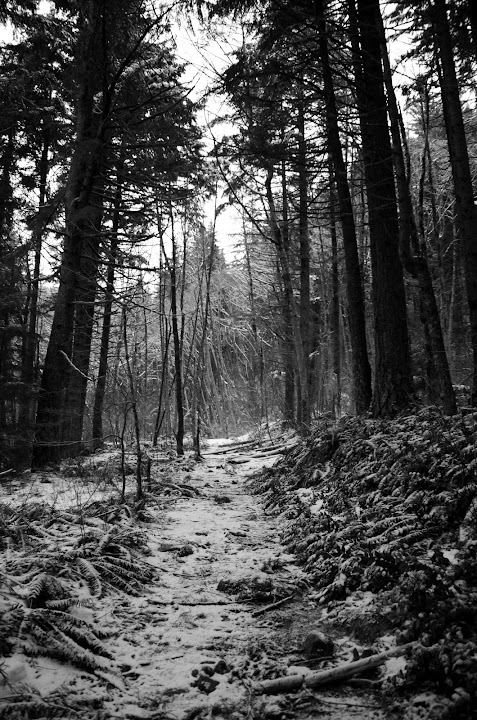 It was a frosty day (probably never got out of the low 30s) but - owing to there being almost no wind - very comfortable for hiking. 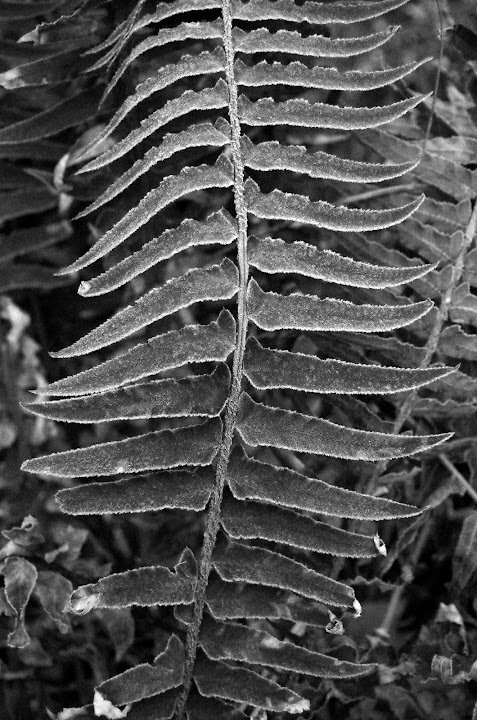 By the time I turned up the Heartbreak Ridge trail, the snow had deepened to 6"+ and would just keep on getter deeper the higher I climbed. 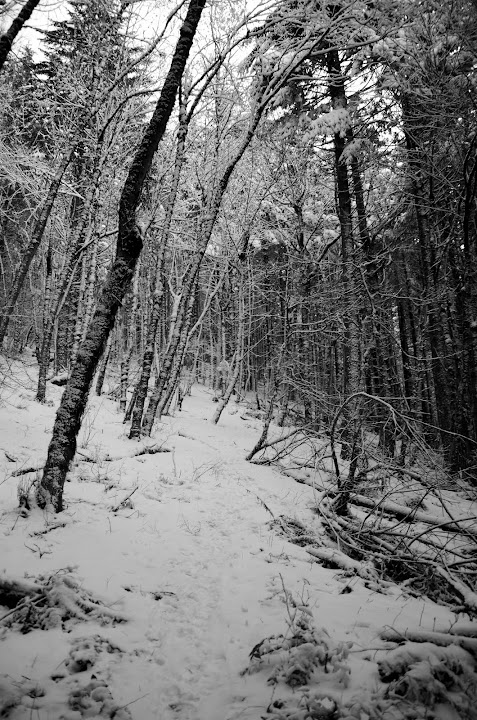 Fortunately, three backpackers - who had spent the night below the summit - had stomped solid foot steps all the way to the saddle. By the time I reached the first viewpoint, the clouds had parted, the sun was out, and I had a good view of snow-clogged Hamilton Mtn to the W. 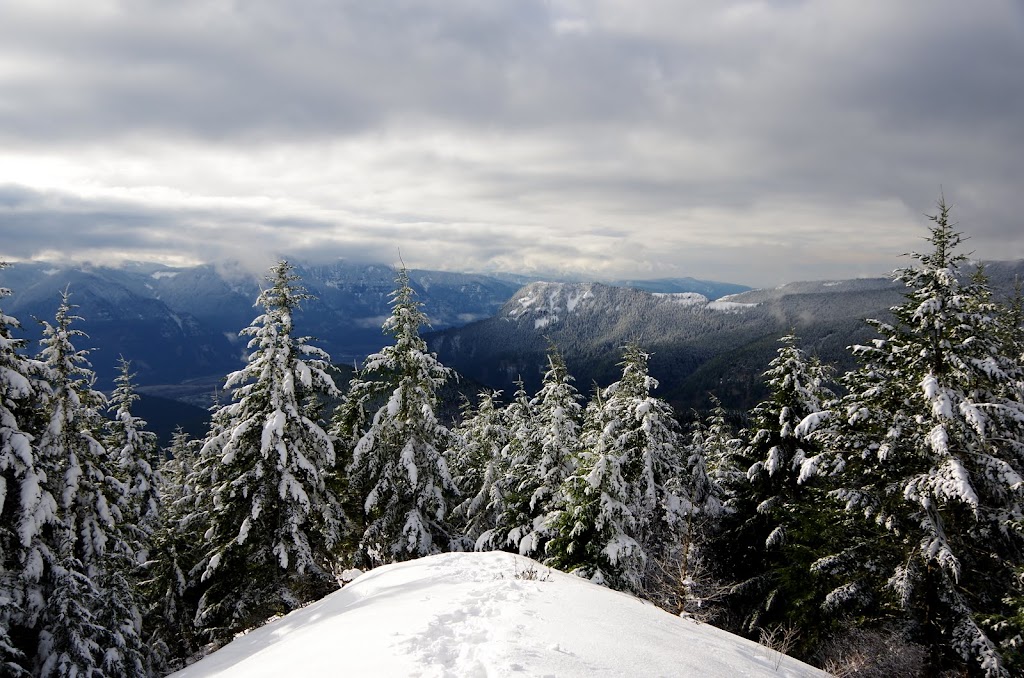 From the saddle, there was a nearly iconic view of Table's S face, with its upper reaches grappling with a passing cloud, 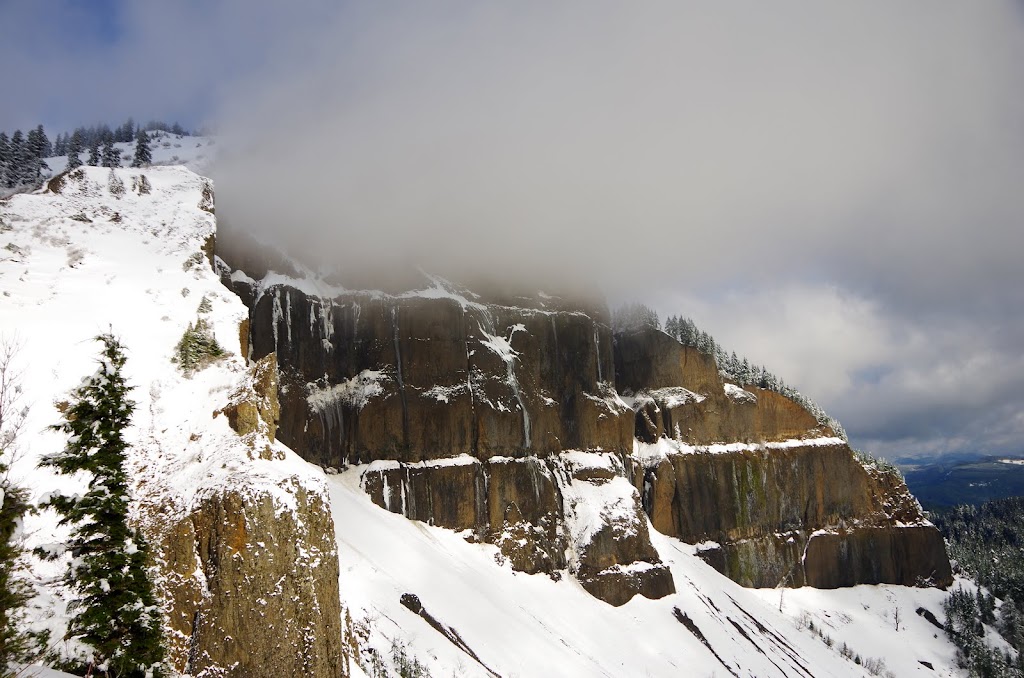 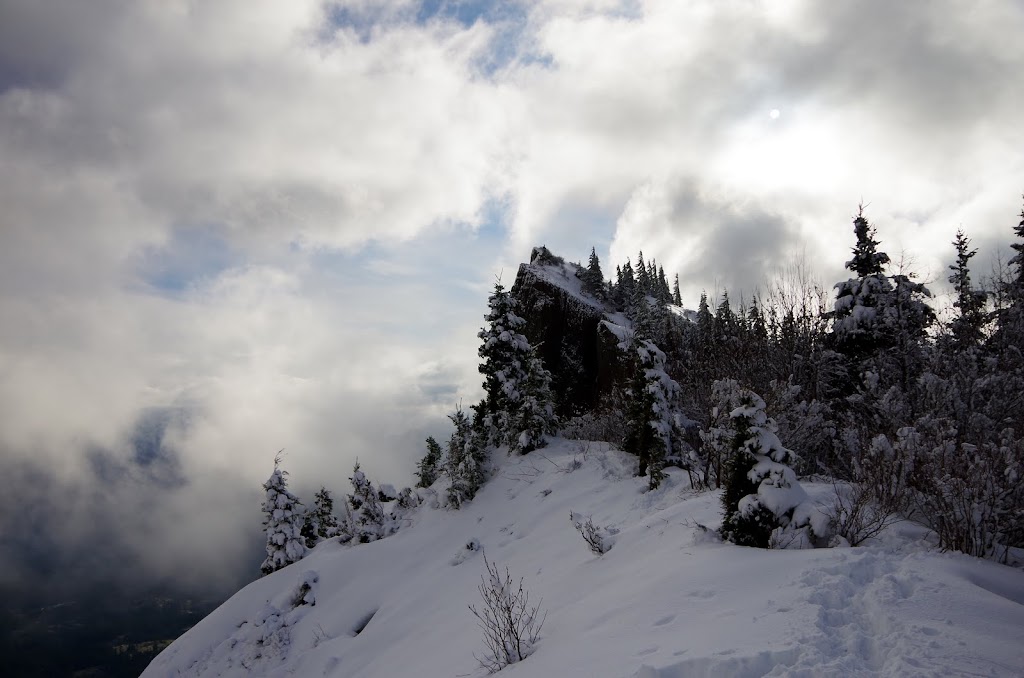 What was also impressive was the amount of snow that had accumulated on Table's W ridge, 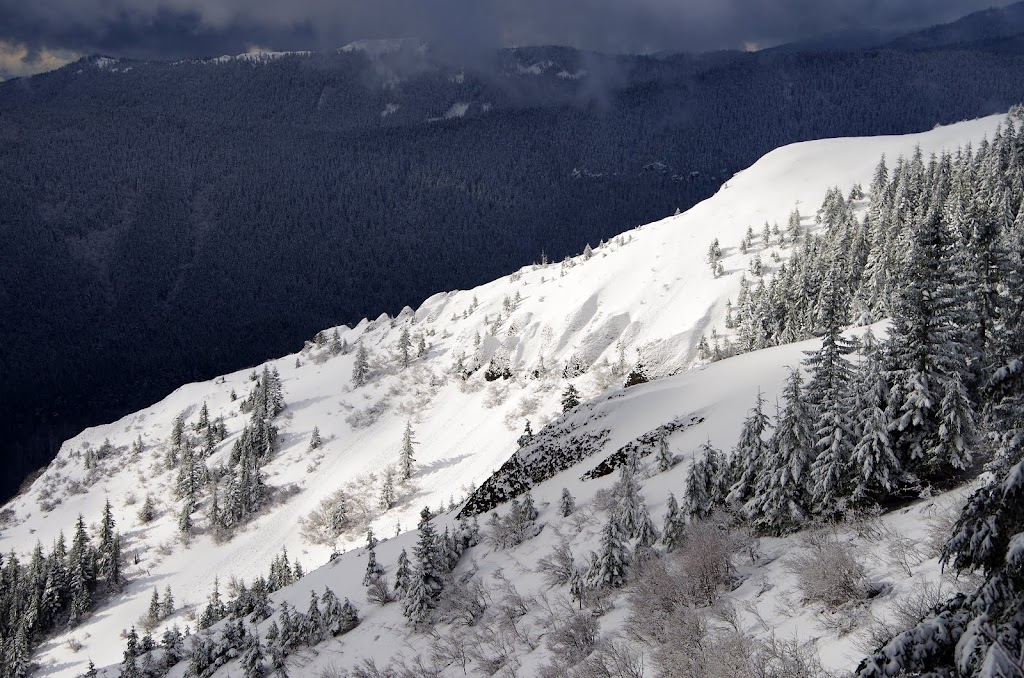 so much so that it had been able to form small "avalanches" of snow balls on the ridge's steeper flanks. 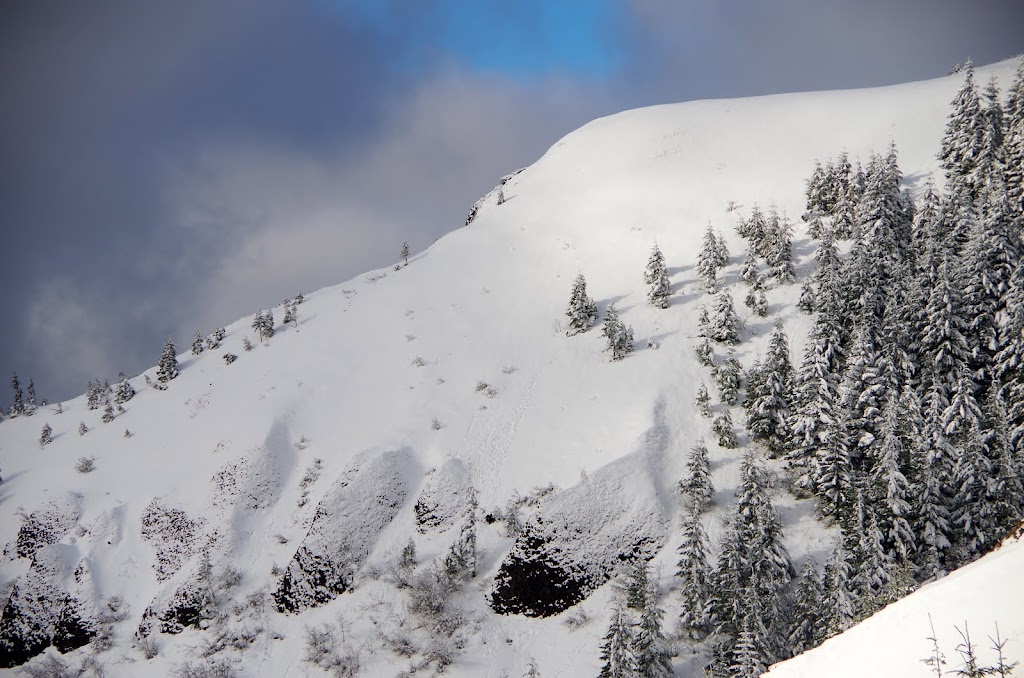 The backpackers had said that snow conditions were less secure above the saddle, so I put on snow shoes there both for flotation and for the traction. I also got to use the built-in climbing bails for the first time. The "new" trail over to the boulder field was buried under snow, to the point where you'd have to crawl under overhanging limbs in places. So to avoid that and to get to better views quicker, I headed directly up from the saddle (which is a winter/snow only route). About 200' above the saddle, I had my first (and only) clear view of Hood. 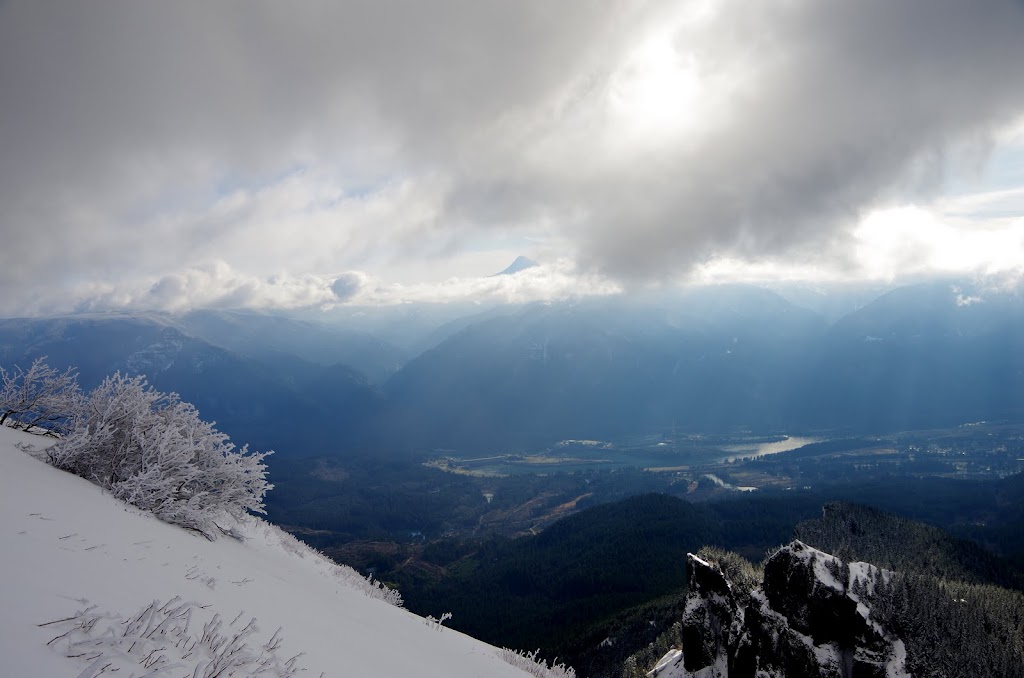 Snow conditions between the saddle and Table's summit ridge were an interesting combination of soft snow, soft snow over the now harder, icier earlier snow events, and very hard snow. Traction devices were a definite plus on some of this stuff. In some of the steeper sections, where the soft upper layer balled-up the traction, I found myself "skiing" backward on the snow shoes - not a comforting sensation. After some work, I reached the untracked snow on top of the ridge. 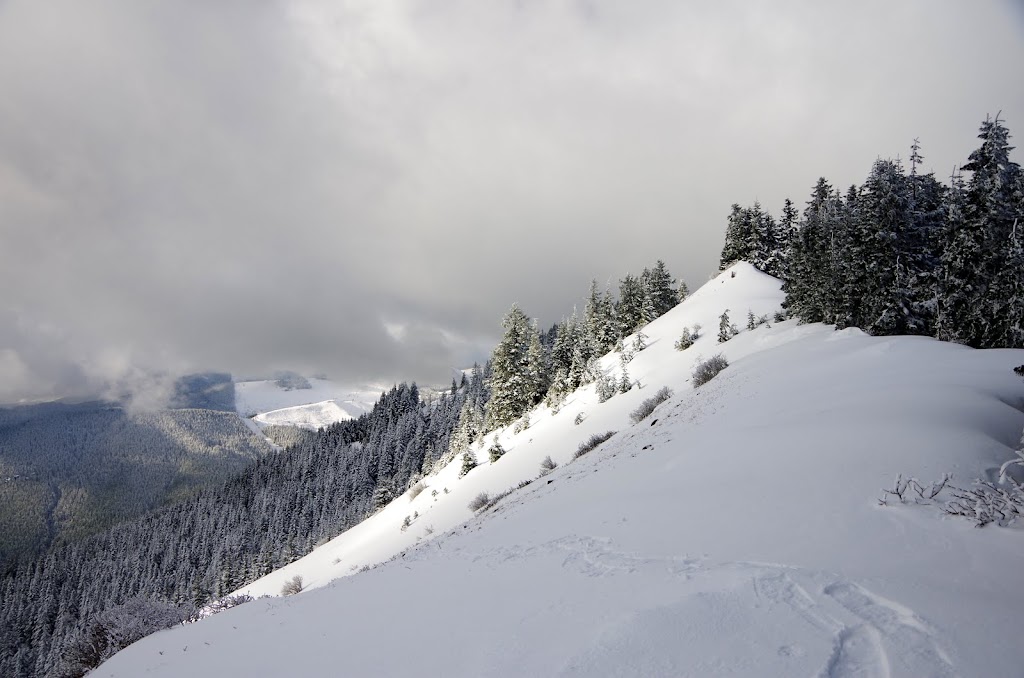 Going out to the E end of the ridge, I could see down to the narrow spine - with it's impressive cliffs - where the backpackers had camped (black arrow). They were fortunate it was a calm night because that is one exposed campsite (and really tricky if you're a sleepwalker). Snow shoeing thru the brush (red arrow) was vastly preferable than getting anywhere near the unstable snow at the edge of those cliffs. 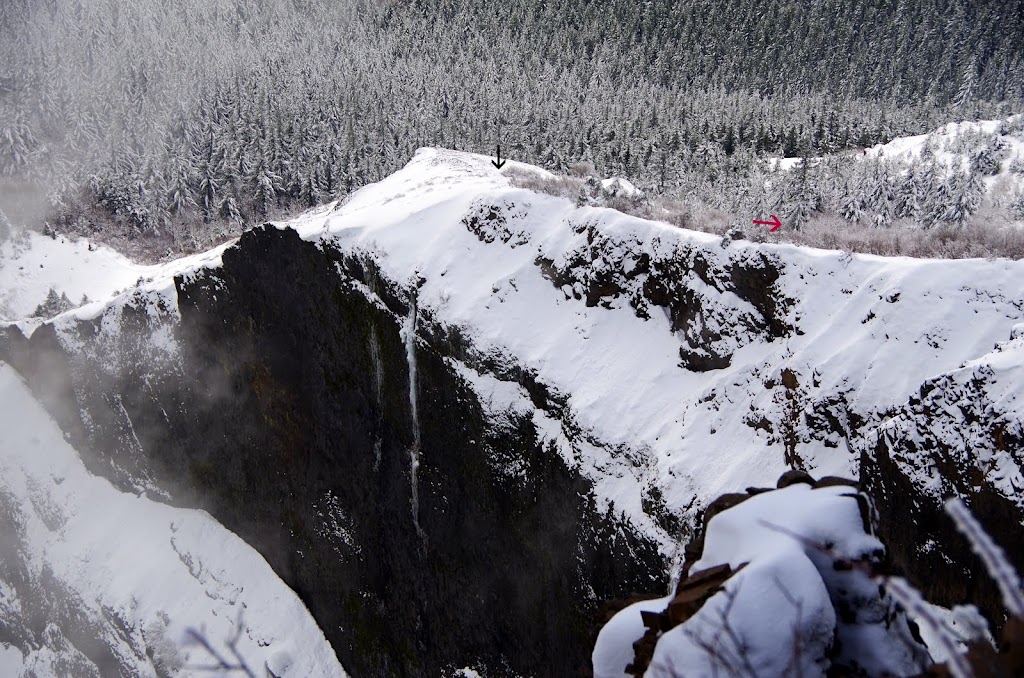 Several of the clearcuts that have bedeviled the PCT between North Bonneville and Table were also visible. 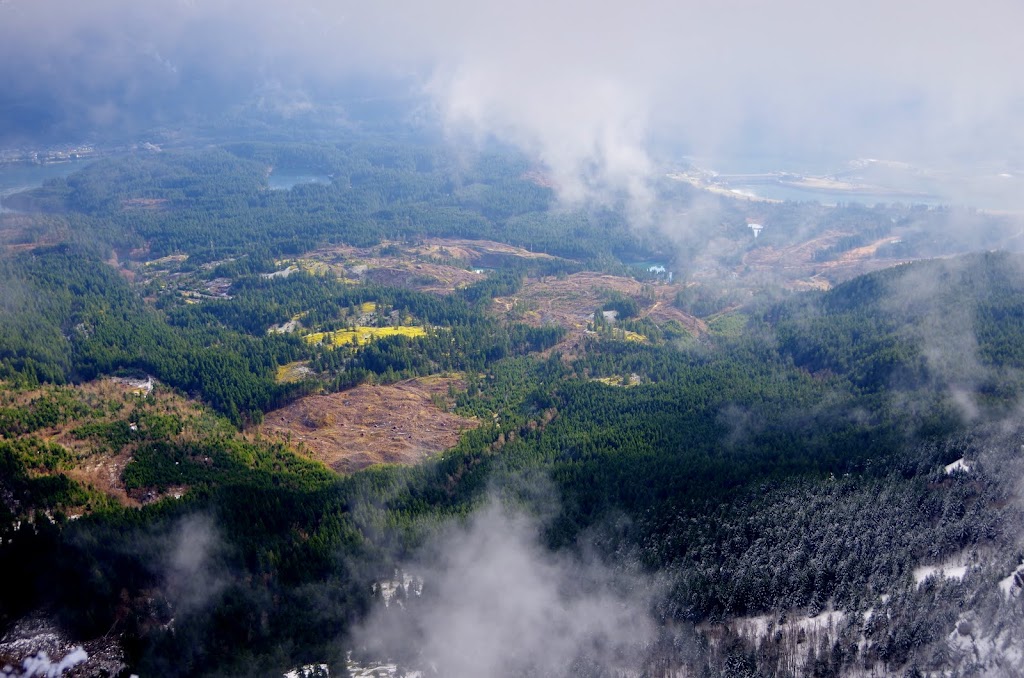 It was cold on top but, without any appreciable wind, pretty comfortable. 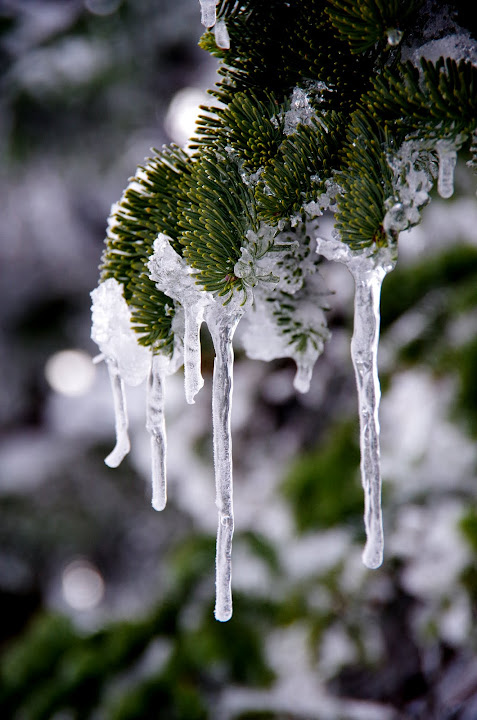 My original plan was for a loop descending the W ridge. But the possibility of tricky snow conditions over there, combined with its greater exposure to significant drop-offs, made me decide to retrace my steps and save the W ridge for later. And then the gray jay flew in and settled all over the summit - a clear signal that it was time to descend. 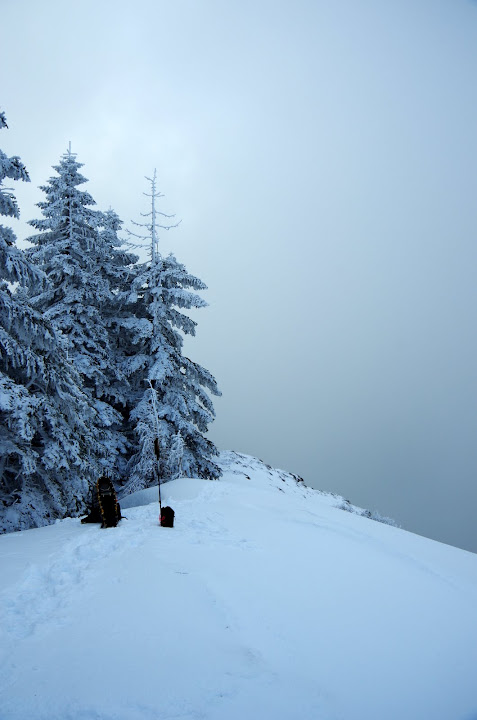 Of course, a soon as I'd descended 500' the gray jay took wing and the clouds began to part. 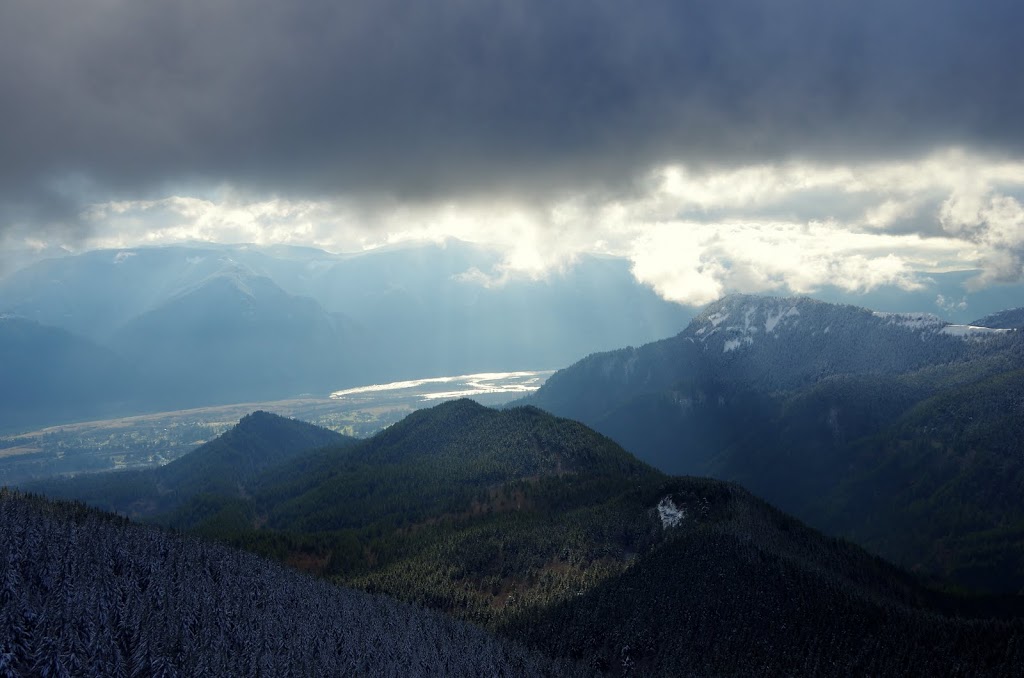 By the time I reached the saddle, not only were the clouds gone, but my stopping spot on top was bathed in sunlight. 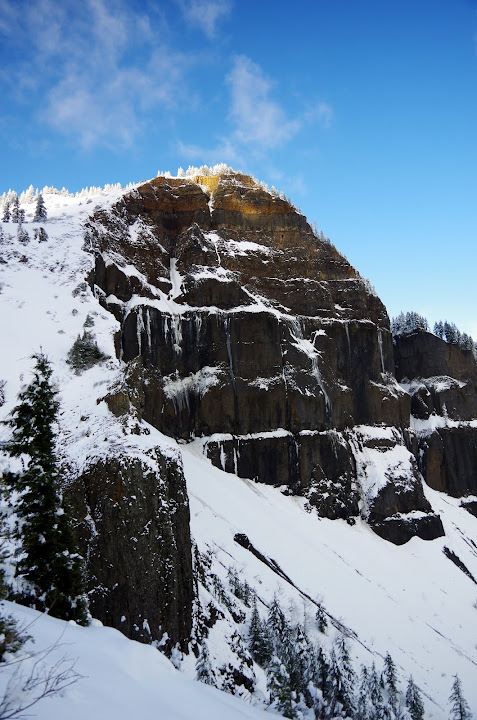 Shooting in B&W makes Table's S face look just as scary as it is. Despite the low temperatures gluing stuff in place, the sound of rockfall echoed off the face the whole time I was there. 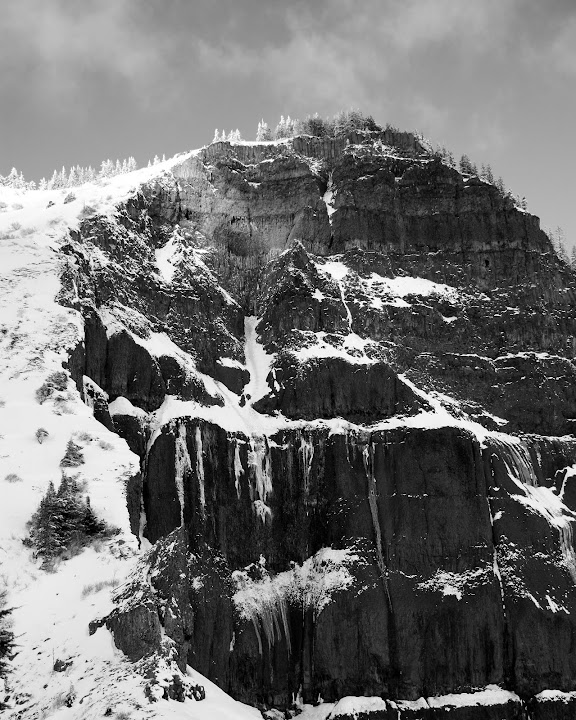 The view E along the Gorge was magnificent and it was good to see that those who did Dog today got their fair share of sunlight. 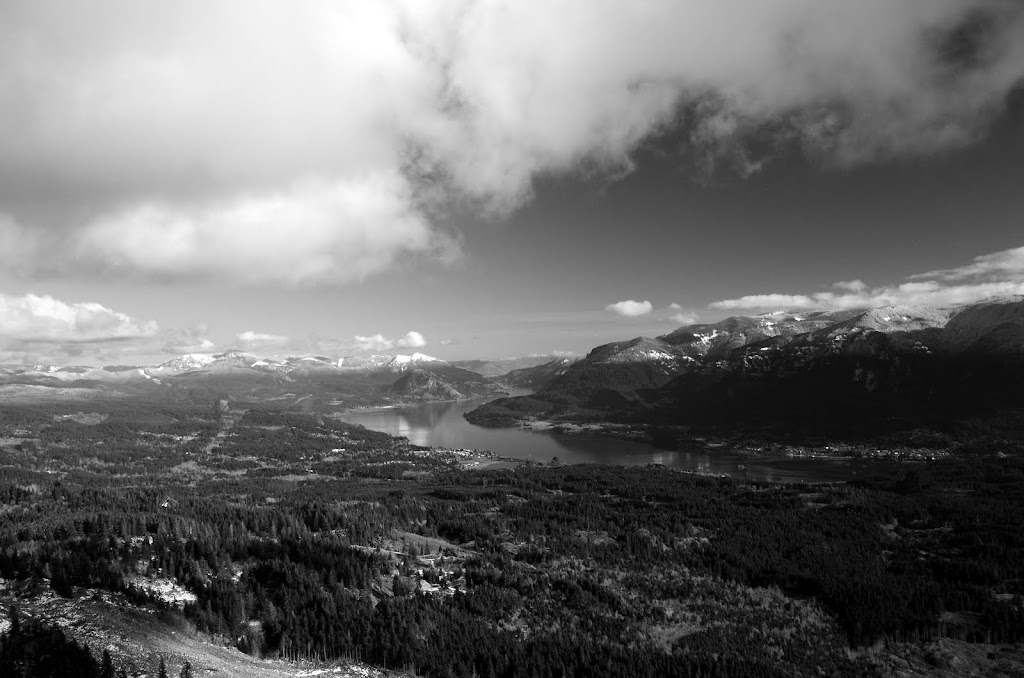 The clouds continued their retreat as I reached the PCT, 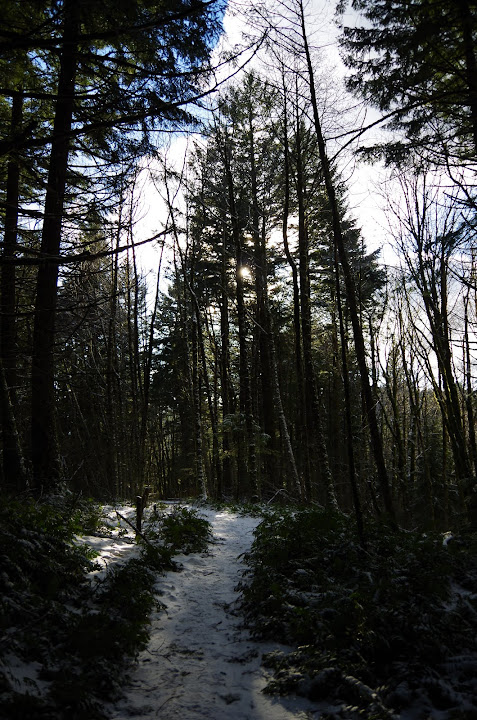 and by Carpenters Lake they were all gone. 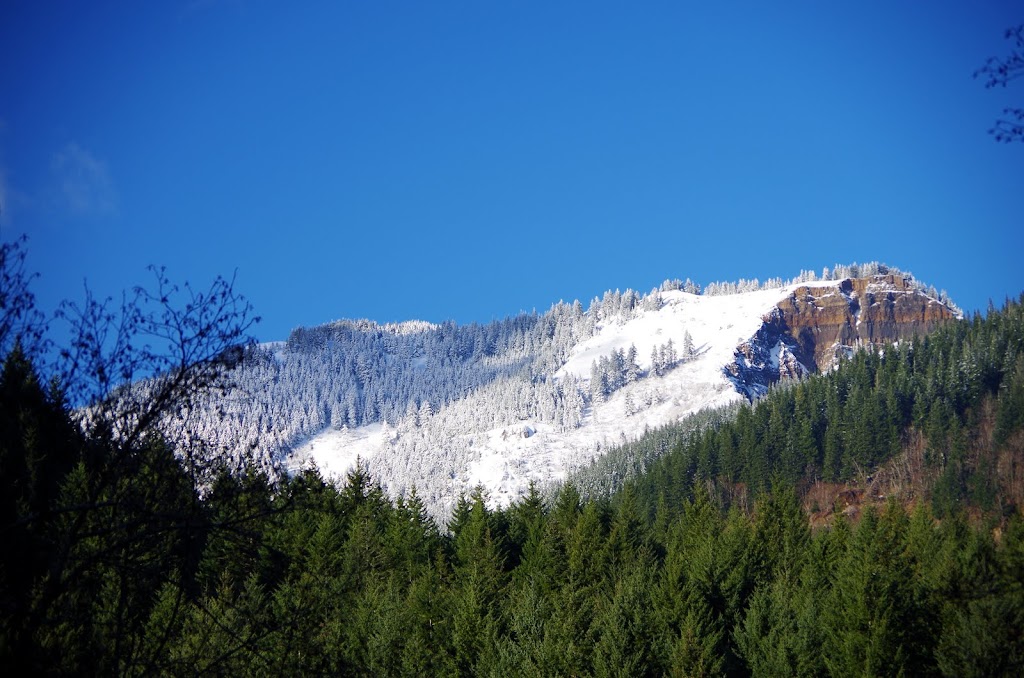 Short but steep (7.7 mi RT, 3400' EG), Table is a classic hike at any time of the year but with snow it's particularly fun (and an extra good workout). It would have been nice to have full clearing on top but the mix of clouds and snow can make for more interesting images. Will be back for the W ridge once the snow settles a bit (and hopefully someone else kicks steps!

what an excellent TR and amazing photos! thanks!

i'm really glad those backpackers got out of there safely. maybe they "knew" they'd have good weather all night, but that campsite seems overly risky, even in good weather.

bad knees rules everything around me.
Top

VM. Marvellous report and pictures. One year I hiked up Table every month, some months several times. It was a year with very little snow. It was before the new part of the trail went in so it was very exposed. On Feb of that year the wind was blowing so hard I had to crawl for quiet a distance.When we were dealing with DNR about a new route from the saddle I wanted the trail to continue from the saddle on a diagonal line to intersect the scree slope where the trail is now. I bet you have been up that way. It is a much nicer route especially in the snow with no loss of elevation. Congratulations on one tough winter hike.
Top

Great TR and pictures Bruce. That is a serious winter outing!
Some people are really fit at eighty; thankfully I still have many years to get into shape…
Top

Whew! Beautiful dramatic photos! I always feel a little queasy on top in the spring and summer. I can't imagine what it feels like in the winter. Excellent report!
Rambling on at Allison Outside
Top

Dramatic images of an incredible hike! Can't believe the choice of camp site by the backpackers. A gust of wind could've done them in. Whoa!
Clackamas River Waterfall Project - 95 Documented, 18 to go.
Top

beag wrote:VM. Marvellous report and pictures. One year I hiked up Table every month, some months several times. It was a year with very little snow. It was before the new part of the trail went in so it was very exposed. On Feb of that year the wind was blowing so hard I had to crawl for quiet a distance.When we were dealing with DNR about a new route from the saddle I wanted the trail to continue from the saddle on a diagonal line to intersect the scree slope where the trail is now. I bet you have been up that way. It is a much nicer route especially in the snow with no loss of elevation. Congratulations on one tough winter hike.

Thanks! I agree - it would have been nice if the "new" trail had climbed diagonally from the saddle instead of wandering through the woods and that boulder field. They still would have been able to by-pass the upper meadow which was suffering so much damage. Oh well - but going directly up or diagonally is still a good options in the winter.
Top

BrianEdwards wrote:Dramatic images of an incredible hike! Can't believe the choice of camp site by the backpackers. A gust of wind could've done them in. Whoa!

Maybe they checked the weather - and it turned-out as forecast - otherwise they were a little lucky as wind across that ridge (and it can be A LOT of wind as beag notes) is more the norm.
Top

Thanks for the broken trail, Bruce, not to mention the TR and spectacular pics. I followed your tracks to the top. Sunday was about as good a day as they can get in January. That ice underneath gets a little dicey in places, but I used snowshoes going up and crampons going down a new route (to me) between the trailed talus slope and westway ridge all the way to the PCT between the kiosks. Seems to have the makings for a great winter route, down!
Top

Great TR and pictures, Van - especially the B&W of the rock face. I also used your tracks late on Sunday and met sunset on the summit, then went down on official trail through the scree field, to avoid hiking near that drop-off in the dark. The snow became more stable since your trip, I could use crampons without sinking more than 3-5 inches. My vote is also on the route along the edge of a cliff - much less snow and brush than on official trail. There seem to be tracks on west ridge already, as far as I could see. The summit has some big 5+ feet drifts, wish I had more daylight to explore. 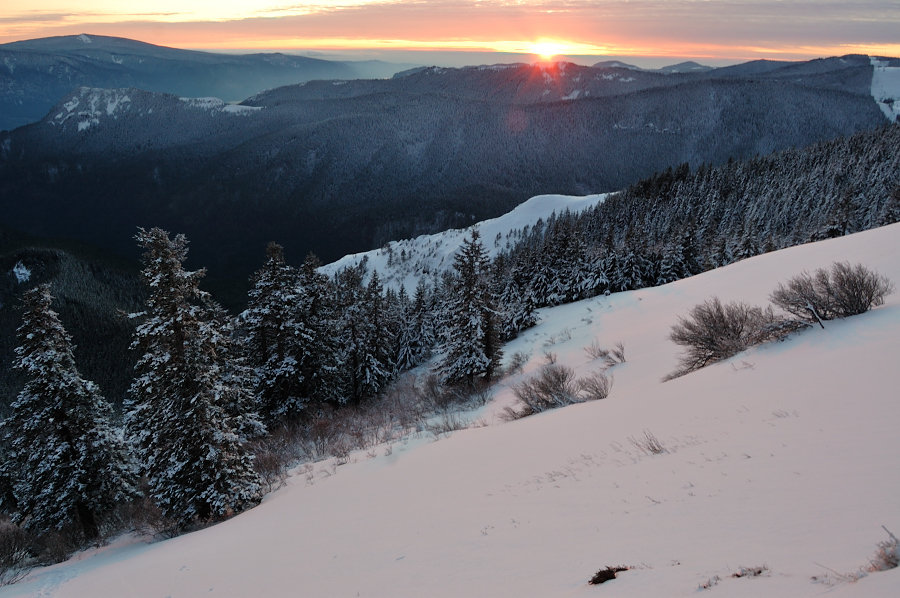 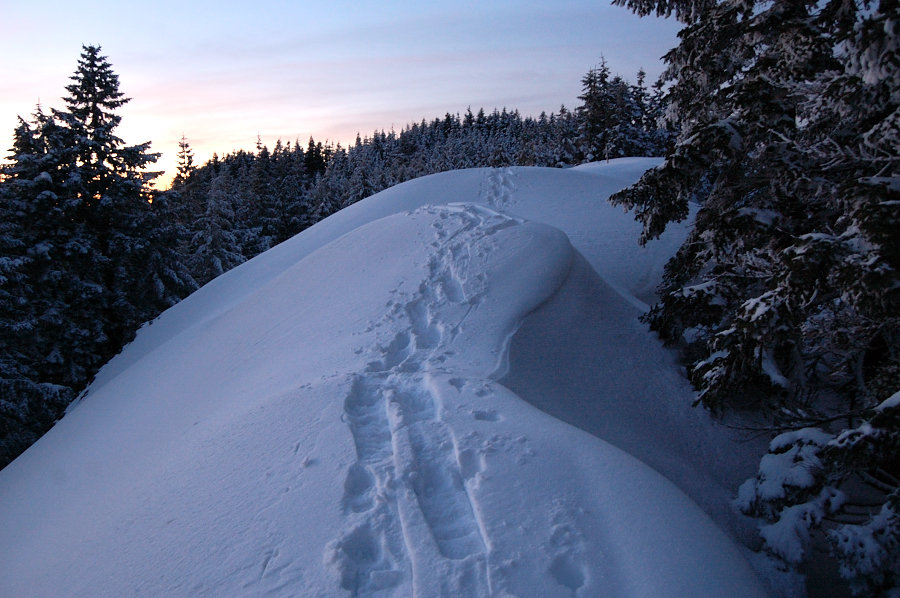