Greg and I headed up to Mt. Hood on Sunday to go snowshoeing. Traffic slowed to a crawl in Rhododendron where the two lanes merged down to one and then right after that we ended up behind the slow-moving gravel truck, which was actually okay because the roads were a little slick and it was nice to have fresh gravel to drive on. It made for a slow trek up to Government Camp but we were so busy gawking at the winter wonderland all around us that the slow pace was okay. The trees were snowy/frosty starting about 2,000 feet and it was SO beautiful!

White River was our first choice if the weather was clear and Twin Lakes was our backup. Even though it had been clear for the drive up the clouds started rolling in pretty quickly and the mountain was already vanishing when we left Government Camp. Plus there was a sign that said chains or snow tires were required on Highway 35 and we had neither. So we headed to Twin Lakes. 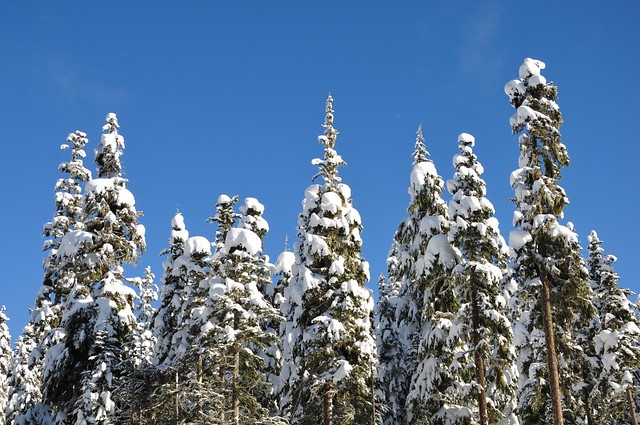 The trail was well-traveled and pretty packed and we had an easy trek. 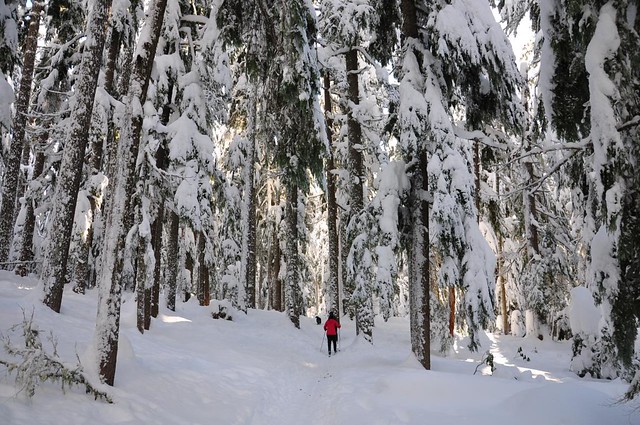 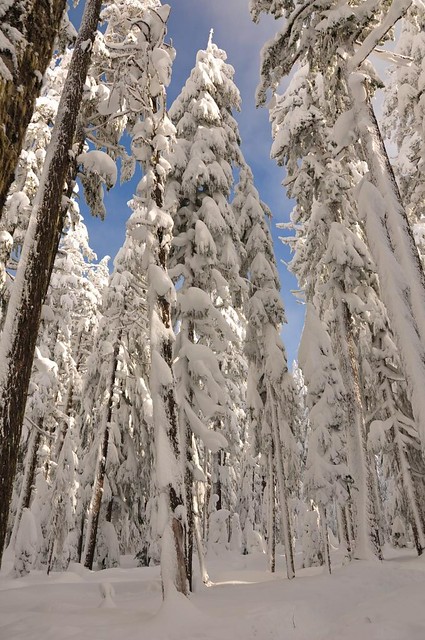 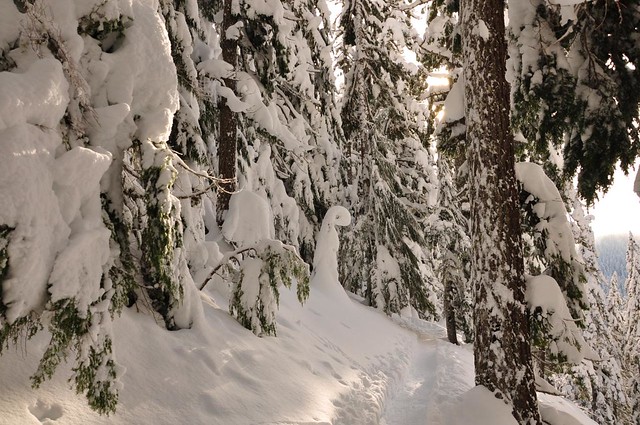 I love snowy trees against a blue sky! (It was REALLY cold out but that was actually okay because if it had been warmer then all that snow would have been sliding off the trees onto our heads!) 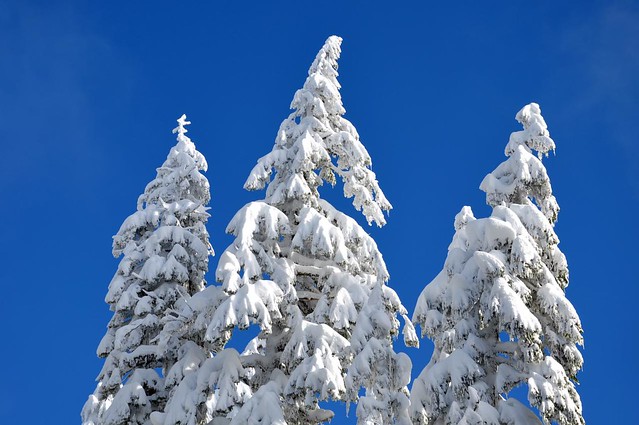 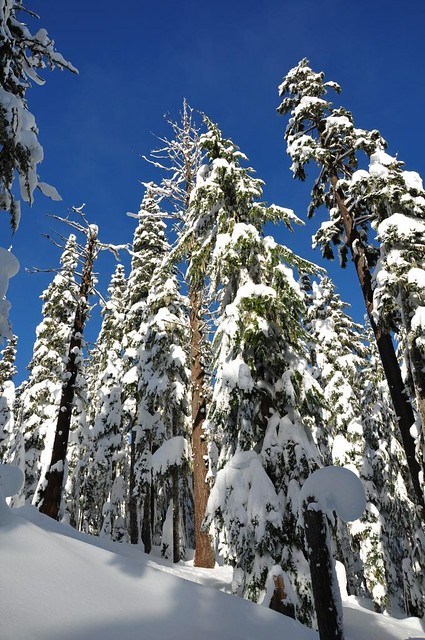 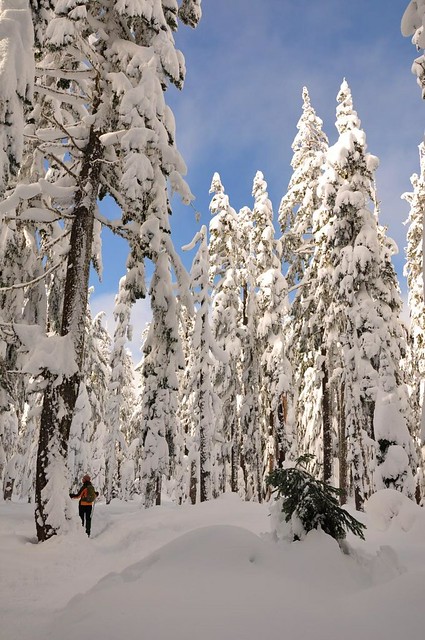 We got to the lower lake where we had a bite to eat. 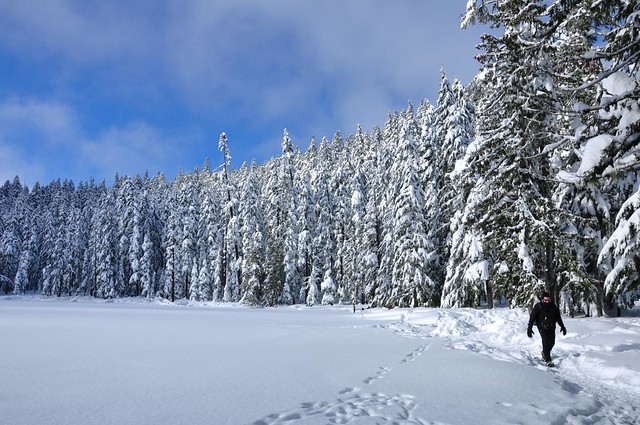 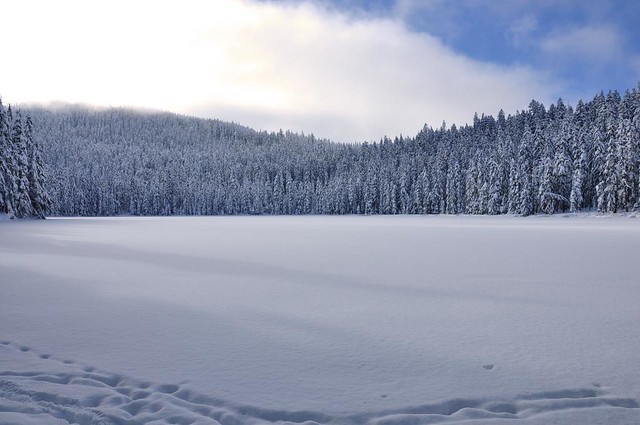 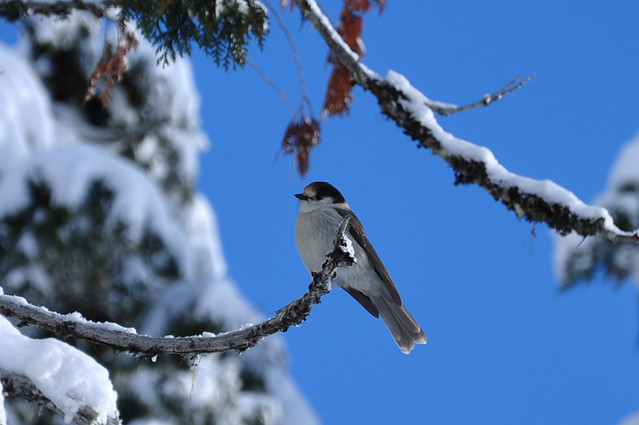 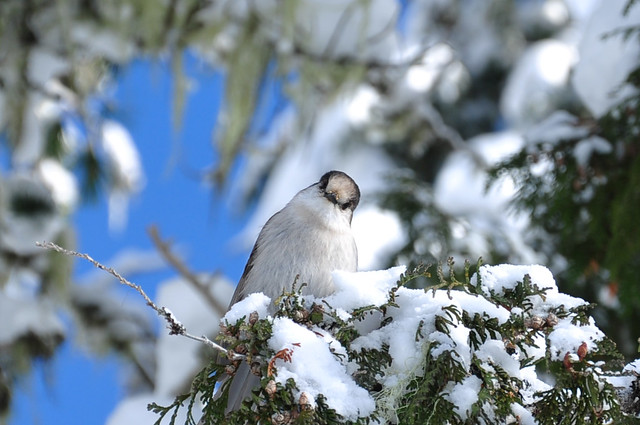 Then we headed to the upper lake, which was further away than I remembered. Beautiful snowy landscape along the way: 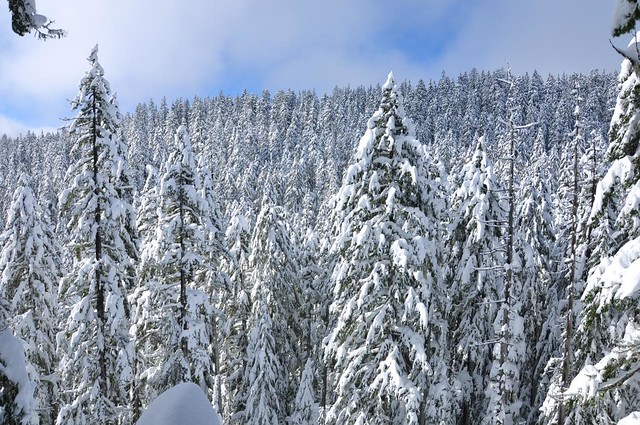 Normally you'd be able to see the tip of Mt. Hood poking up above the trees over there, but it was too cloudy. Glad we didn't go to White River! 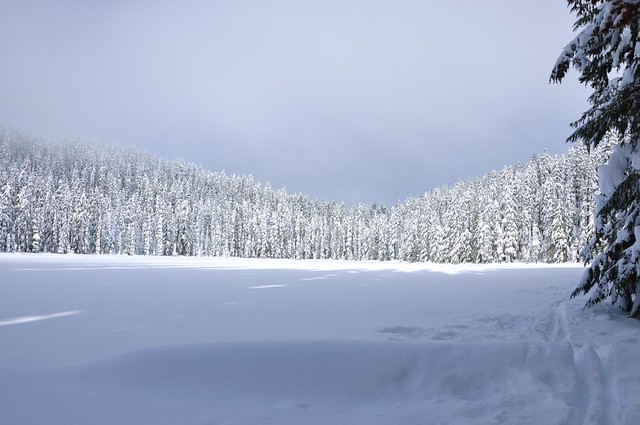 More gray jays hung around and did their cute begging thing. Many many photos ensued. 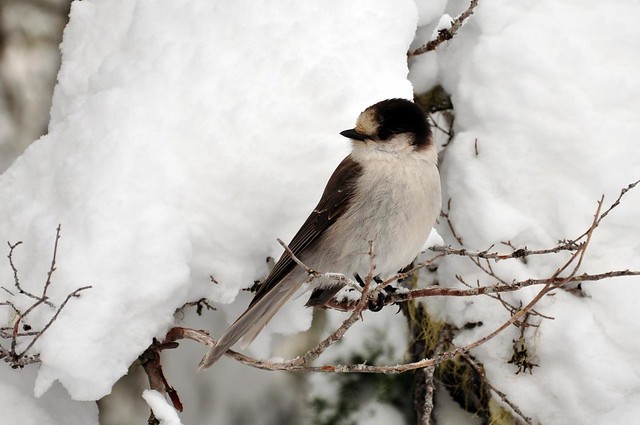 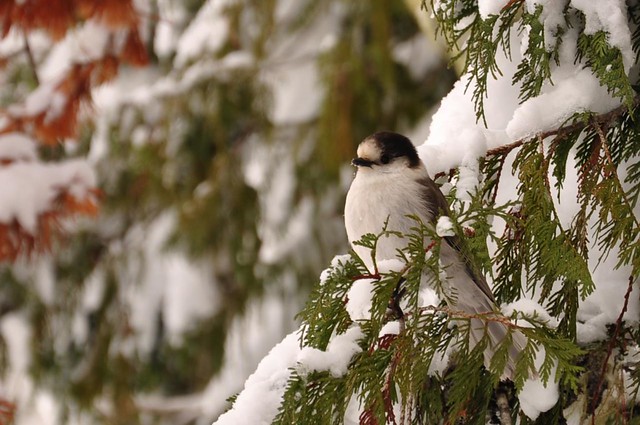 Greg at the lake: 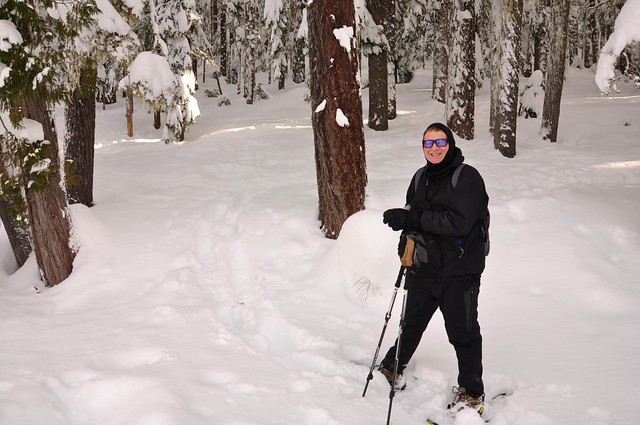 Then we turned and headed back to the car. One last picture at Twin Lakes Summit. 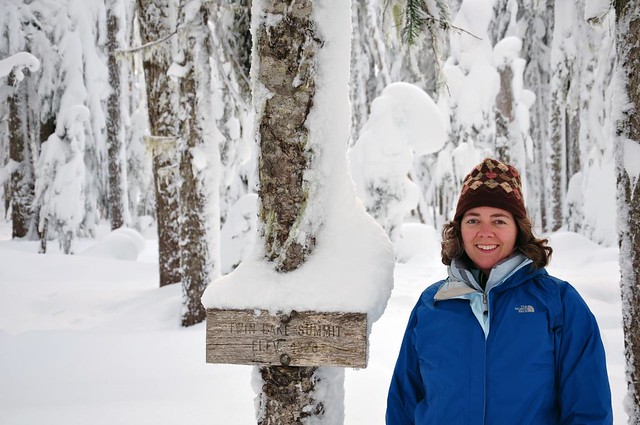 Back at the sno park we made great haste to stow the gear and get the hell out of there. The place was full of idling snowmobiles and the exhaust fumes were overwhelming. I started feeling nauseous. I don't know how those guys put up with the fumes. On our way to Government Camp for some nosh we saw LOTS of cars parked along the highway near Trillium Lake because the parking lot had filled up. When we passed the ODOT yard we saw that they had spray-painted "NO PARKING" all along on the piles of plowed snow at the entrance. The areas along 26 near the Timberline Road junction were crazy with people putting on or removing chains. Then we got to Government Camp and it took us 15 minutes to drive the business loop from the east end to the Ice Axe Grill (we had to return Greg's rented snowshoes at the Huckleberry Inn, which is why we drove through the middle of town). There were hundreds of cars, pedestrians, snowshoers, skiers, sledders, and dogs all over the place. It was a madhouse.

On a side note, the icicles on the buildings in Government Camp were wicked. 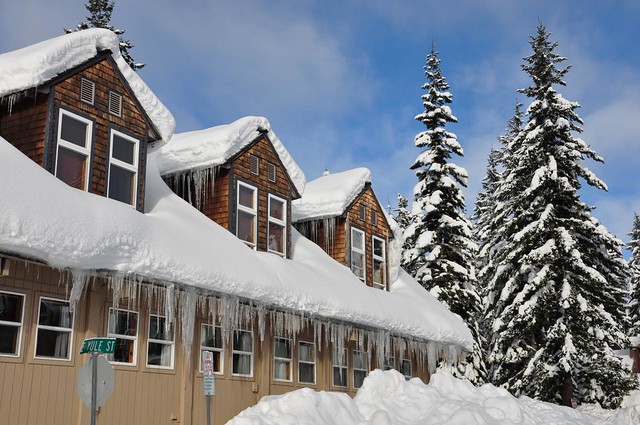 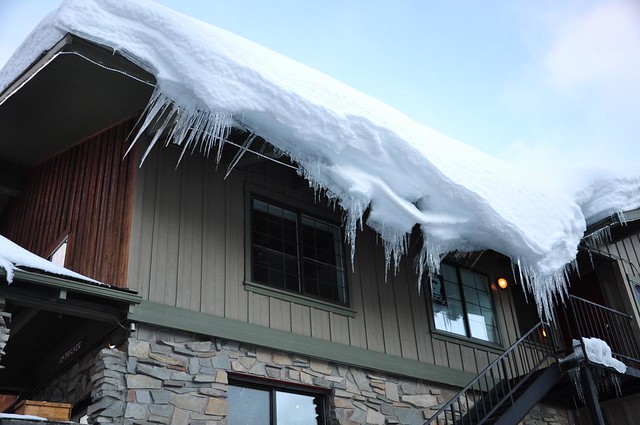 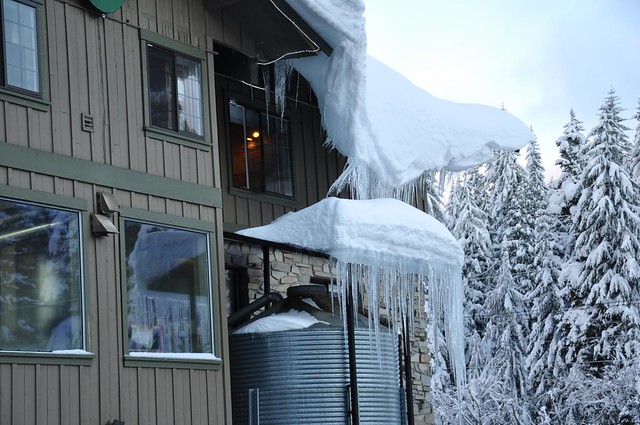 A beautiful day on the mountain! Really glad we went.
Top

We were up there on the same day, same trail. The snow was some of the best we have ever seen on Mt Hood for snow shoeing (we are relative novices) nice and powdery, no ice to speak of on the trail. You pictures really capture the beauty of the scenery. We got a late start and didn't make it to the snow park until about 1:00 PM. We passed a lot of people coming down the trail as we were heading up. Once we got to the upper lake, we didn't see another person the rest of the day. We decided that we'd go ahead and take the route around the lake and come back to the twin lakes trail via the PCT. The one thing we'd forgotten is that this is actually a longer way to go, but it was so beautiful it was worth it. We got back to the snow park right at 5:00 and there were people still stowing their snow machines. I have to agree that the fumes are less than appealing. It struck me that hearing how loud they were in the lot, that I was surprised you couldn't hear them while on the hiking trail. The traffic coming out was really something else, it took us 90 minutes to get to Government camp.......
Top

tednottodd wrote:We were up there on the same day, same trail.

I can't remember what time we got back to the sno park, but I'm thinking we must have passed you on the trail as you were hiking in and we were hiking out.


tednottodd wrote:It struck me that hearing how loud they were in the lot, that I was surprised you couldn't hear them while on the hiking trail.

The terrain blocks the noise. There's a big butte between them and us, plus they move a lot faster and they get out of earshot pretty quickly as they move away down Road 2610.


tednottodd wrote:The traffic coming out was really something else, it took us 90 minutes to get to Government camp.......

Great photos, Cheryl - I'm partial to snowy trees against a blue sky, too... I suppose because it's not all that common in these parts!

Ditto on the traffic, tednottodd -- I bailed after seeing the mobs at the usual trailheads and went back up on Monday and Tuesday. Yeesh!

We could use a few more plowed SnoParks, methinks...

Wow, great pictures! Looks like it was a great day. Love the photos of the jays.
I'm not running from my problems, I'm running to solutions.
Top

those cute Jays will snatch food off your lip...so be nice and share
Top

Now why do you go showing me such beautiful pictures when I'm stuck at home sneezing and coughing with a head cold? Now I just want to be out there in the cold snapping pictures of the winter wonderland.

Keep up the good hiking and photographing, and I'll just be hoping for the same karma you are having on the trail.
Top

Hope you feel better, BigBear. I'm coming down a cold myself and will probably have to spend this weekend at home!