OK, it's wet and gloomy for a while, our spirits sag, then the weather comes up with a day like today, and all is forgiven. Went back to Beacon Rock SP (one day left on this year's Discover Pass!) - not forgetting the snowshoes this time - and parked at the equestrian TH. Road was walkable with boots until the W Hardy Ridge trail junction at about 1300'. A set of snowshoe tracks went up the W trail but I continued on - now breaking trail - toward the E side trail. Even with snowshoes, I was punching in 6-8" a lot. 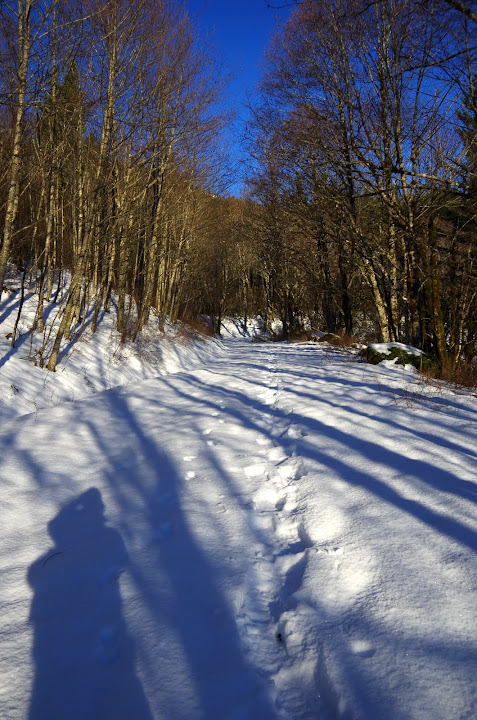 The road eventually turns into a trail, which was fairly easy to follow initially but became increasingly about sidehilling and thrashing through snow-draped trees. Near the top, I gave up on the trail and went directly up to the ridge. The person who had come up the W trail apparently turned around here, so the ridge N toward Phlox Point was unblemished - quite the winter wonderland. 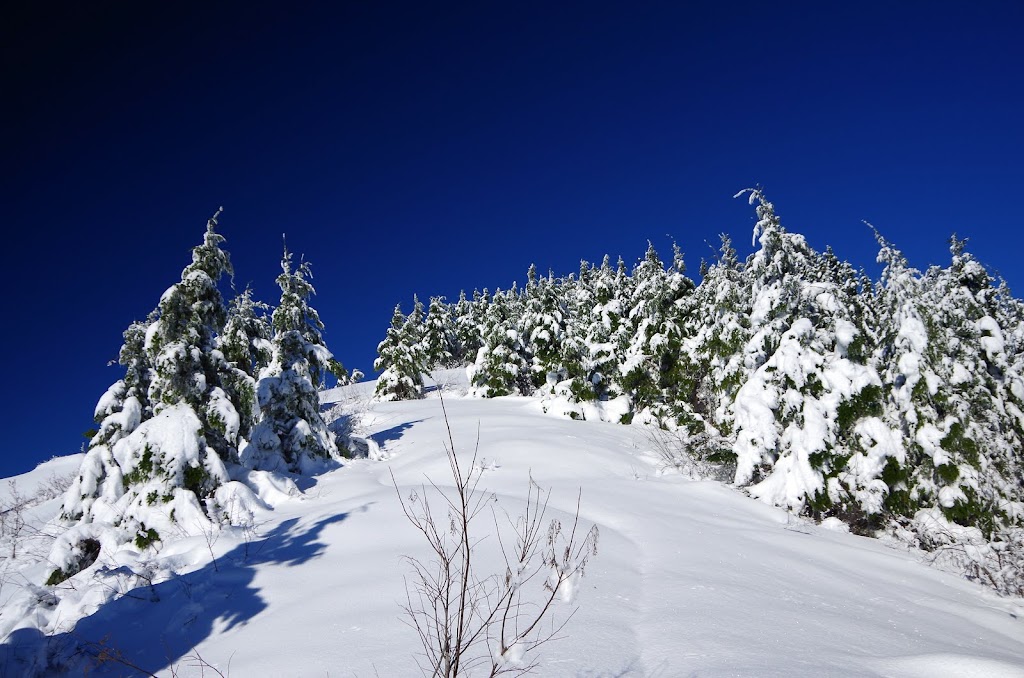 It was a fair amount of work getting to the ridge but on this clear, sunny (but not necessarily warm) day, the huge views of all our local favorites more than compensated for a little sweat. Hood was visible, 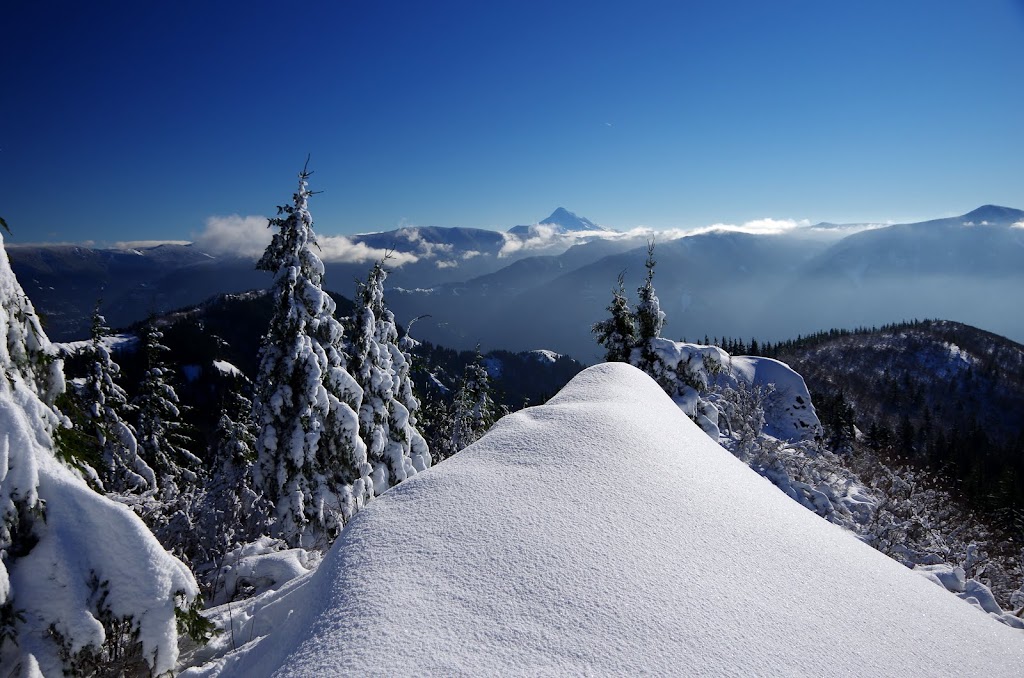 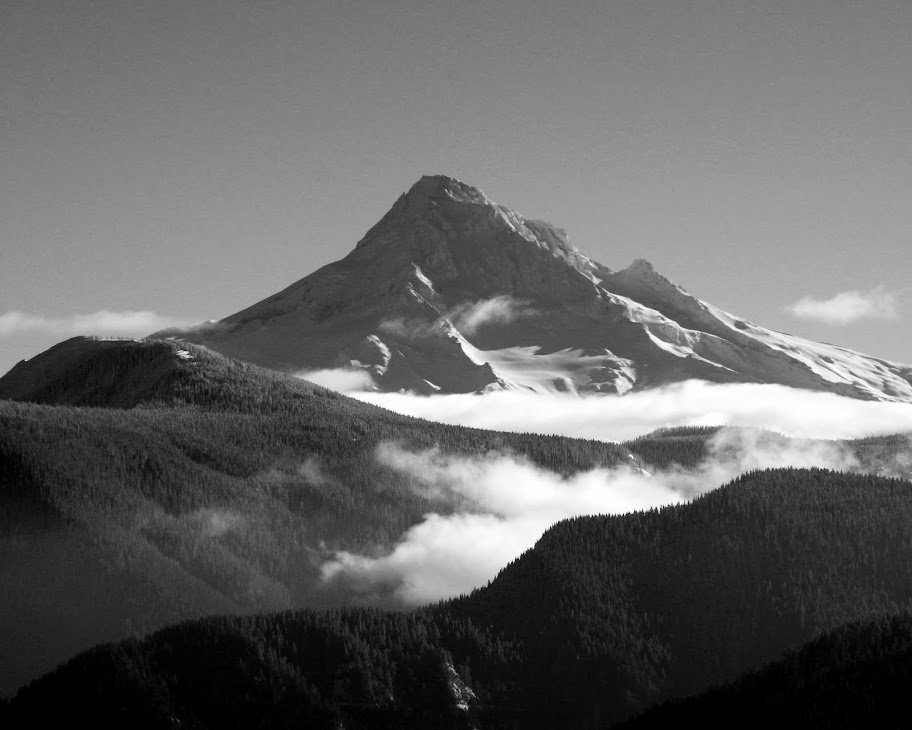 as was Hamilton (foreground) and the entire - very snowy - Benson Plateau. 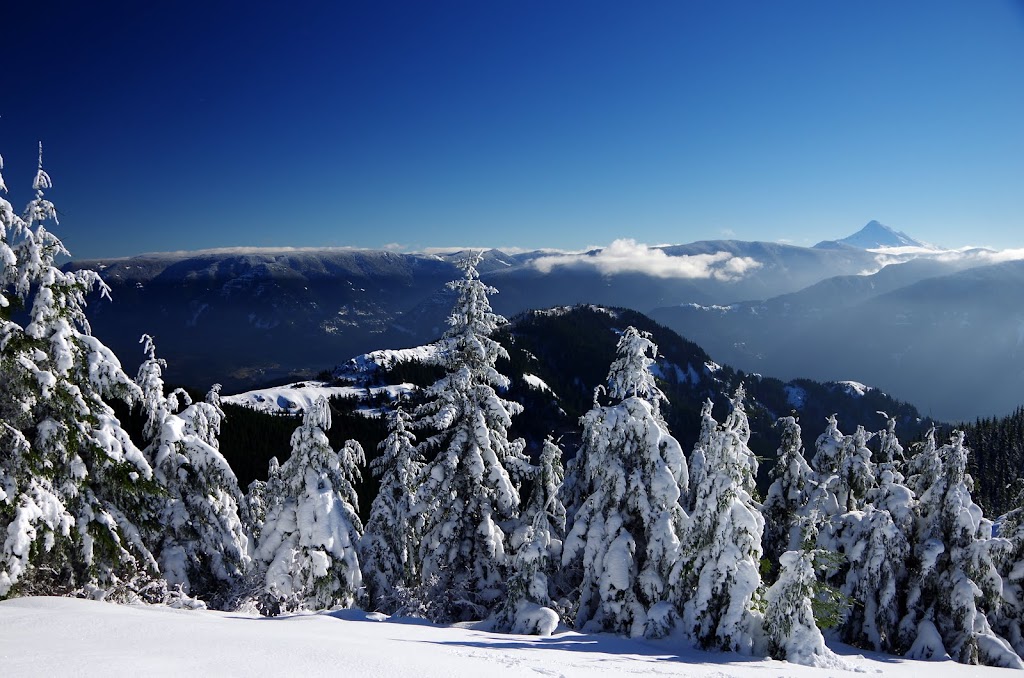 I had thought about going N on the ridge to Phlox Point, but fighting my way there through the soft, deep snow and the snow-impacted vegetation was just going to take longer - and be less pleasant - than I'd planned. So I just went to the first good viewpoint N on the ridge, where it's possible to get a broadside view of Birkenfeld (b), South Birkenfeld (sb), Adams (a), and Table (t), 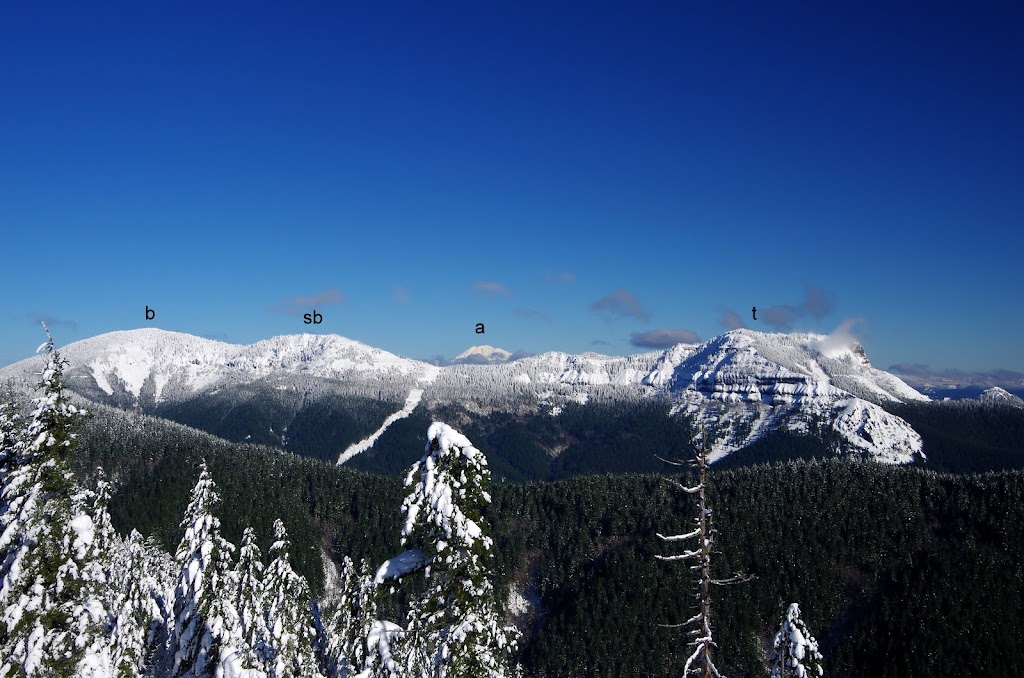 a full view of Table's W face, with great swaths of snow hanging off each cliff, 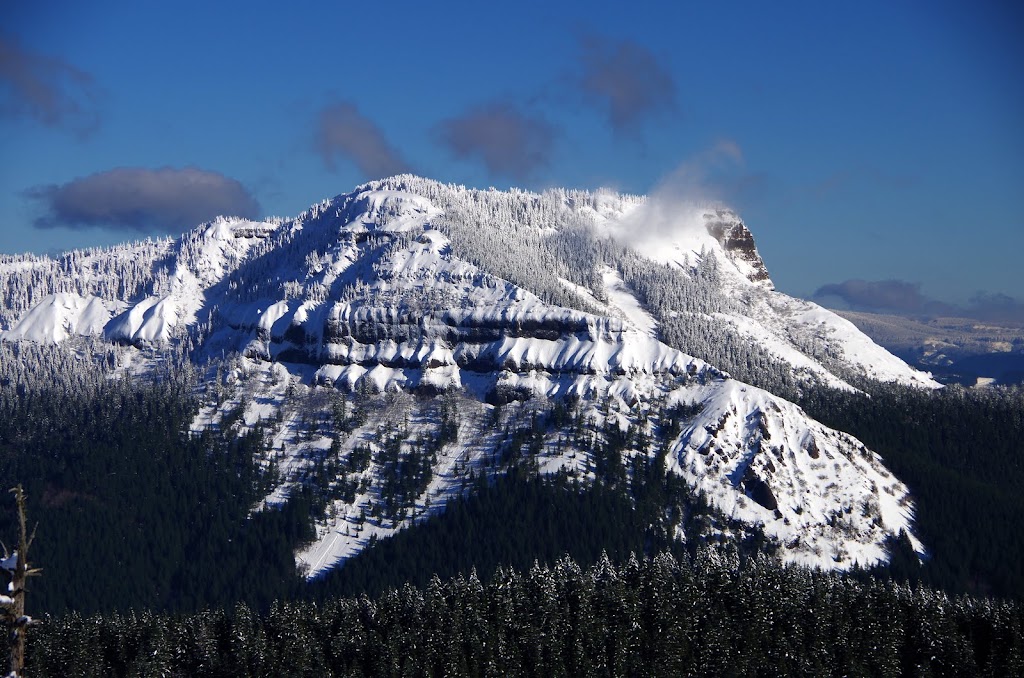 and of Adams in the distance. 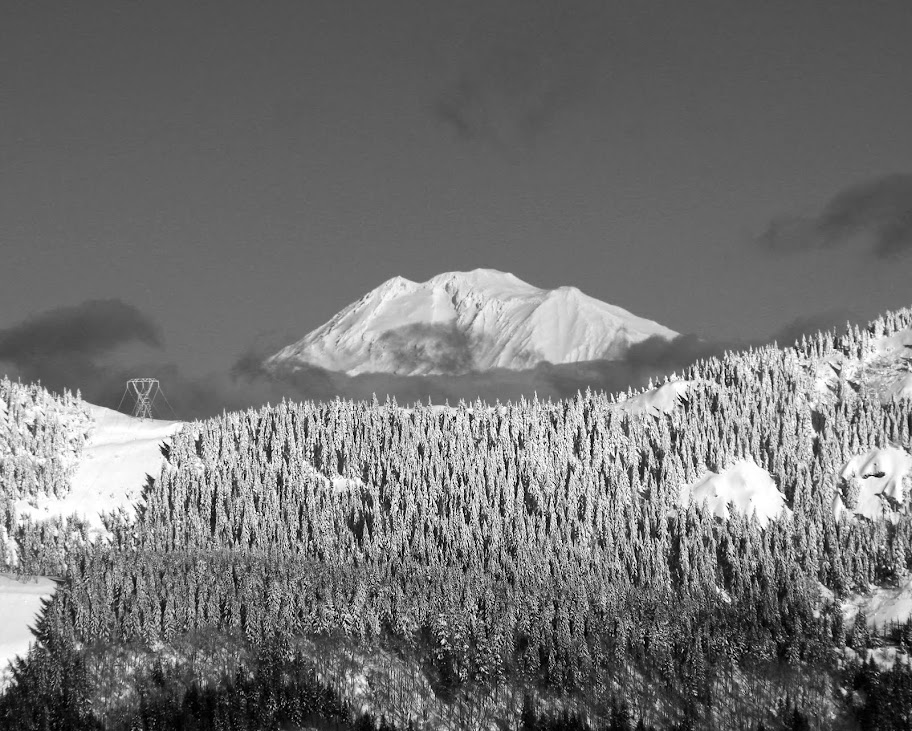 E along the Gorge, I could see Dog Mtn sporting a nice cloud cap - just about the only place in the Gorge with such a covering - no consolation to those who hiked Dog today hoping for a view. 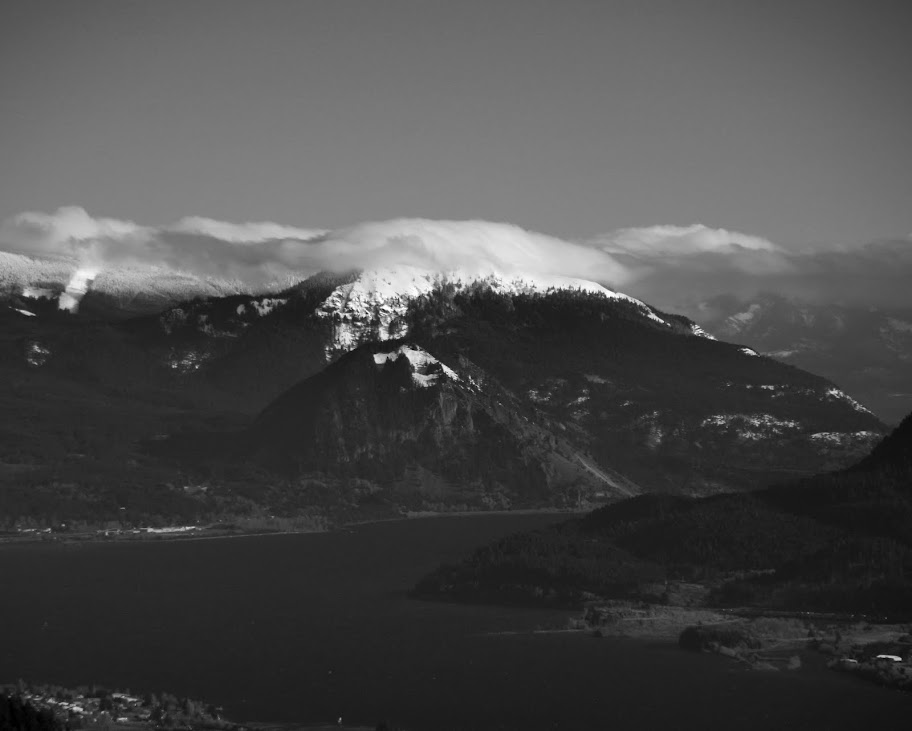 After a brief stop for lunch on the slopes, 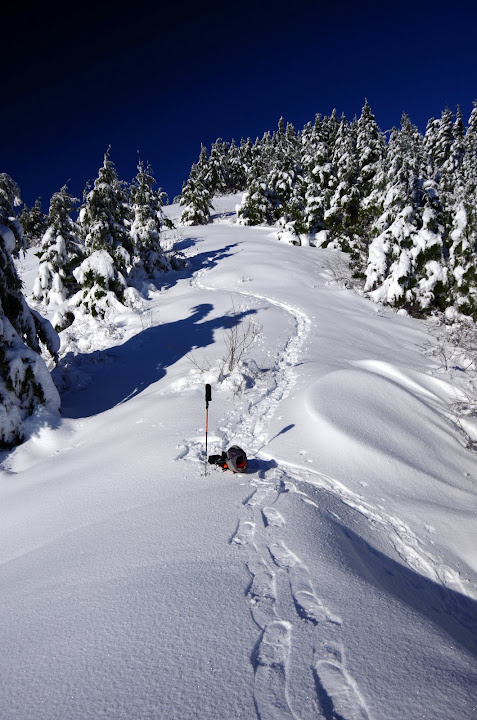 it was back to the TH via the W trail. Along the way, I was lucky to see this fragile icicle stalagmite/stalagtite combination under a tree root. 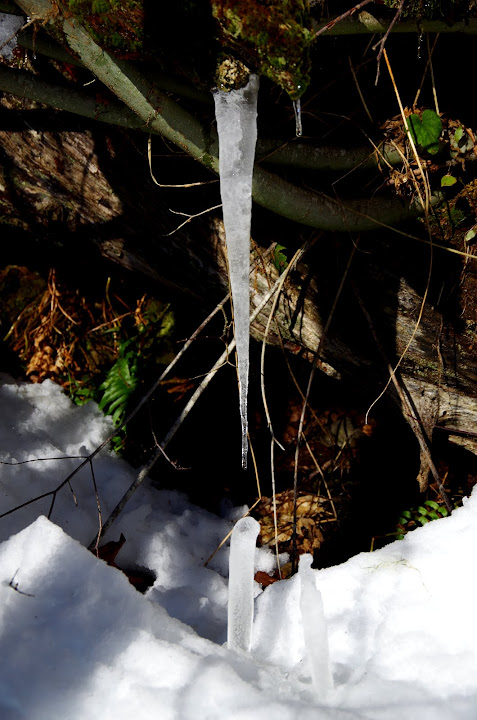 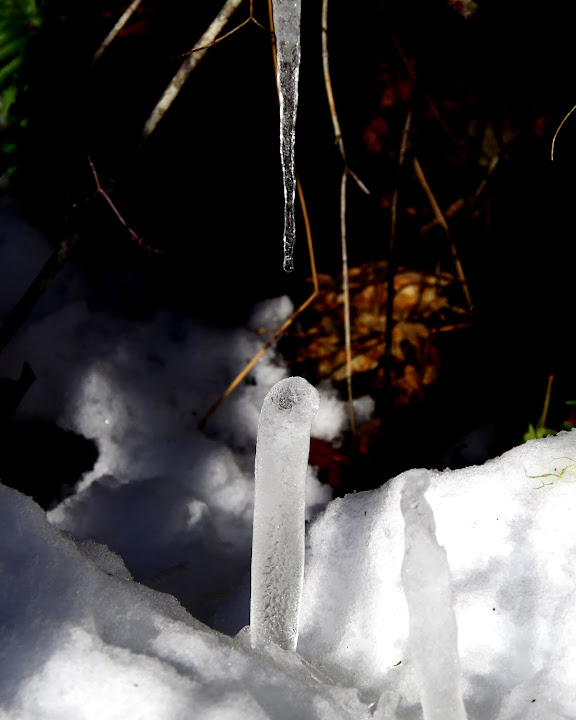 I'd run into Adrian (and his big friendly black lab) on the ridge and we chatted a bit on the way back to the TH. We passed one snowshoer on the way up, and 5 folks hiking lower on the road, but that was it for the day. Not a long hike (7.4 mi RT, 1700' EG) but great one - owing to the weather and the views - plus those extra points earned for using snowshoes. 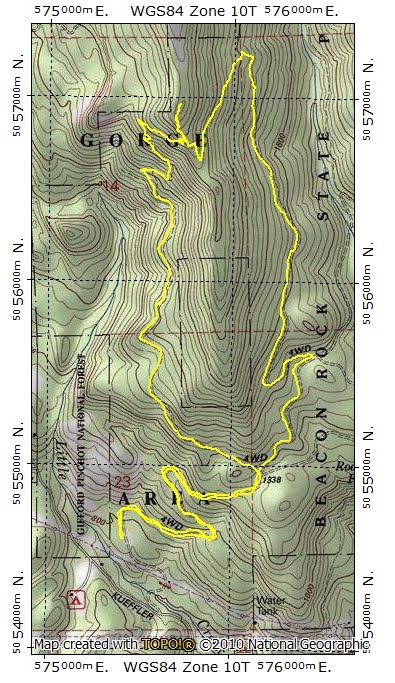 WOW! Absolutely STUNNING PHOTOS! Sun and snow is THE BEST!!

I hiked up there on February 2nd, and for only the 2nd time, had to turn back because the wind was blowing so hard, I estimated near hurricane force. It wasn't too much fun either going up with all of the snow and trying to side step up the mountain.

How long did this take you?
Tyler Mode
http://www.naturespixpdx.com
Top

I hiked up there on February 2nd, and for only the 2nd time, had to turn back because the wind was blowing so hard, I estimated near hurricane force. It wasn't too much fun either going up with all of the snow and trying to side step up the mountain.

How long did this take you?

Thanks! About 6 hrs for the loop - snowshoes are slow and I did spend some time trying out my new camera. Out toward Phlox Point is definitely not a fun place to be in a high wind. But on a day like today? Can't beat it.
Top

Cool shots for sure, what is the new camera?
Top

Great report! I was wondering about this one... Thanks for breaking trail!

Hi. It was nice meeting you today and chatting for a while. Thanks for doing the dirty work and breaking trail today. It was a great day out there. I think your pictures tell the story. Thanks also for the tip on the cut-off to Hamilton.

Happy New Year to all the fellow hikers out there!!!

All beautiful shots. What a wonderful day you had.
"When we try to pick out anything by itself, we find it hitched to everything else in the Universe." - John Muir
Top

Eric Peterson wrote:Cool shots for sure, what is the new camera?

Thanks! A Pentax K-30, with the 18-135mm lens and a circular polarizer filter. I had no previous experience with Pentax, but Backpacker gave it a good review as a water and dust resistant outdoor camera and there was another laudatory review in one of the photo mags. That, and a lot of on-line research, convinced me to give it a go. So far, so good. Another plus is that it has an accessory that lets you switch the specialized lithium battery for AA cells - nice for longer, backcountry trips.
Top

Looks like you had a great trip! Sunny beautiful days in the middle of winter are even more special than other times of the year.

Hey, in your black and white photo of Mt. Hood, do you know the name of the big triangular protruberance on the right-hand side (of your photo). I was looking at some pictures I took of the sunrise this morning, and I think it's the same feature I can see in my pictures of Hood. I don't think I've ever noticed it before. Now I wonder what the name of that feature is.
Hannah

Only those who will risk going too far can possibly find out how far they can go.
-- T.S. Eliot
Top
Post Reply
15 posts