Born2BBrad was kind enough to include photos of two trees that he and HikerChris had found blocking the 401 on 12/23 [1] [2]. The photos had me salivating, which is good for digestion. Spirited additionally by drier skies appearing in the mid-gorge forecast for 12/27, I decided on a trip to clear them.

The two logs looked (and turned out to be) quite large, so I headed across the Eagle Creek suspension bridge packing extra heat, as well as an axe - custom ground to a sheen that would have stopped Jack Torrance in his tracks * [3]. I'd end up clearing the first with the axe, the second with my 42" common tooth. 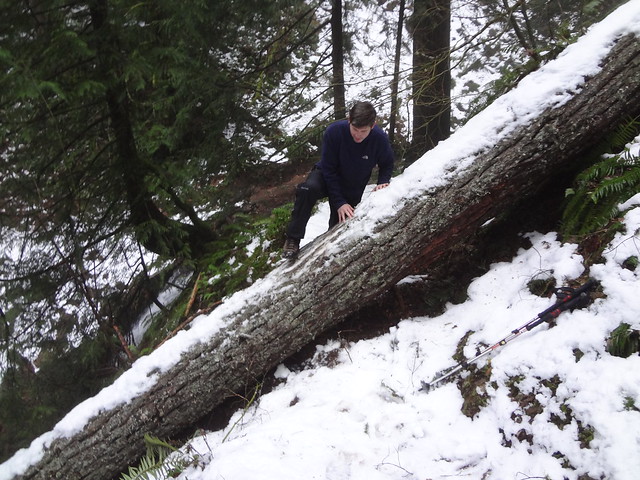 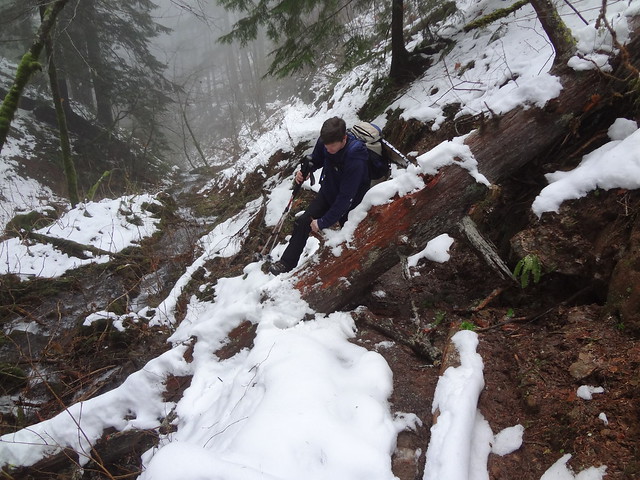 Additional snowfall had accumulated in the intervening week. Once on the 777 road, the snow was a pristine 4 inches to start, increasing to 12 in the mile up to the 401 TH. It was all wet, and as I was bare-shoeing without gaiters, my feet were soaked. No matter. From there the snow depth varied according, I think, to any additional amounts that had avalanched onto the trail. At places it was above my knee caps. The stream crossing was dry shoe-able, rocks not slippery despite the flow. And then I was there.

Sweet. I looked it up an down. Looked secure, with a slight lean downtrail, away from the slope's fall line. The trunk plunged all the way down to the creek bed. Upslope, it ended about 15 feet above the trail completely fractured from the rootball, wherever that rested. I planned a single cut and unsheathed my axe. The bark came off easily. Wood chips flew. I chopped deep vees on both sides, then undercut below the vees beneath the log on both sides, leaving intact a 3x8 inch section which I finished with a pruning saw.

There was no bind.

I tried to roll the 15' upper section in the direction it was leaning, but managed nothing worth mentioning. Brute force correlates with injuries, so I stopped what was really just futzing anyway.

I packed up. It was still light out so I headed uptrail to the next task. More deep snow, but it was awaiting less than a couple hundred yards. The lay of this log was similar to the first. I set about with my 42" saw, making the first cut on the uphill side. Once the kerf was a several inches deeper than the draft of of my blade, I drove in three wedges. There was no bind to indicate these would be necessary, but they are easy insurance against and if there was end bind, it wouldn't be apparent. I finished the cut, then removed the wedges. The upper and lower log sections remained in register as the kerf closed. End bind,m but not much. The second cut went smoothly as well. Despite angling my cuts so as to let the bolt drop to the treadway, it took a stomp to free it. There was thud. It was 3:44. I moved it off trail, then recovered 2 of the 3 1/2" lexan wedges, and then quickly packed up with hope of reaching my truck before night fell.

In no time at all, I was across the creek and plunge stepping towards the 777 where I'd meet up with out-and-back tracks of two humans and two dogs. Halfway down 777, fresh tire tracks appeared. Not sure why the driver had stopped, but they had backed up all the down to the hairpin curve where the 400 trail joins in.

The 15 foot upper length of the 1st log still needed to be moved out of the way, so the next day I headed back up with rope, boots and snow gaiters. My plan was to tie one end around the log up high, then wrap it around the log 3 or 4 times, then lead it off downtrail a safe distance and pull from there. This way, with the rope coming off the top of the log, my pull would be and would remain perfectly tangential and thus all effort would go into rotation. It still was not easy and not nearly easy enough to avoid risk of pulling a muscle. I managed to roll the log about a six inches.

The day before, I had removed a 3 inch diameter tree up high would block the log's path. I had climbed up and cut it down. I retrieved it, then cut a six foot length off the end. With this lever jammed underneath the upper end of the log, I tried prying. It moved. I restaged and pried some more. This was much easier, so I unwrapped and untied the rope. About 7 pries latter, the log felt about ready to take off. With one more, it did, thudding onto the treadway in a sonorous thump muted by the sodden earth underneath and the heavy thick snow all around.

The massive log nearly stalled on the treadway. I became grateful when, having retained just enough energy to keep itself moving, I watched the it roll to edge slowly, then begin tumbling directly down the fall line towards the creek. The slope was steep and the creek bed was quite aways down. Given the log's mass, the potential for havoc was immense. None ensued, but still it was something to see. By the time it reached the bottom, its kinetic energy made me wish I had had the forethought to contract with BPA.

I left the pole where it lay, packed up the rope and headed downtrail debating whether to a) skip back through Portland before Friday rush hour would begin, or b) continue eastward for a shovel session clearing debris off the trail at the Defiance Trail landslide. I pondered and walked. The view north across the river was clearer than the day before, so I stopped for a couple photos.

5) Table Mountain to the east, Hamilton and VanMarmot [1] to the west

Once on the switchbacks on the 400, the pondering stopped. I started hallucinating the aroma and taste of a big warm mug of eggnog. Naturally, this meant it is was unsafe to do anything but drive straight home.

Wowzers. Super amazing work, mcds. You must strip down to your base layer, or even less to avoid sweating & getting too cold. Or, you bring dry clothes to change into? OR maybe you never stop moving, so you don't have to worry about cooling down?

That's some serious sawyer-ing there. And much appreciated.
Jim's Hikes

Excellent sequence of pictures too
Top

I found this report very interesting. It's the first time I have actually seen a "before" with my own eyes. I was wondering how one would clear the big log from the trail. I imagine if not done the right way, it could be dangerous.

I would have loved to see that 15 foot section crash down the hillside.

A couple of questions:
Do you get paid to do this kind of work, or do you just do it for fun? Either way, thanks.
Do you ever use chainsaws?

"I imagine if not done the right way, it could be dangerous."

Those logs weigh a lot

And sometimes there's a lot of tension on a log and when you cut it, it springs into a new position - hopefully you're not in the way
Top

I love these reports. I also benefited from some of your handiwork on the Herman Creek trail today. Thank you!
Rambling on at Allison Outside
Top

You never seize to amaze, mcds. A little snow doesn't seem to slow you down one bit. Remarkable!
Top

Crusak wrote:. You must strip down to your base layer, or even less to avoid sweating & getting too cold. Or, you bring dry clothes to change into? OR maybe you never stop moving, so you don't have to worry about cooling down?

Thanks Crusak. Its a mix of everything.

Born2BBrad wrote: A couple of questions:
1) Do you get paid to do this kind of work, or do you just do it for fun? Either way, thanks.
2) Do you ever use chainsaws?
Brad

1) No pay, just for fun and the whole-body exercise. Even just bending over to pick up small stuff on the trail is good for the core.
2) Not on the trail. I have a nice little chain saw from back in the late 80's that I bought to prep large bolts to turn on a bowl lathe i'd built as inspired by some of the lathes these guys built:
http://www.amazon.com/dp/0525243283 I still have it but it needs a tune up as it will not idle and has no power at low rpm. Shortly there after I went on a vacation to Papua New Guinea to hike. See Attenborough's 1971 segement "A Blank on the Map". While out I came across several bowers of the Vogelkop, and well, that was that.

retired jerry wrote:"I imagine if not done the right way, it could be dangerous."

Those logs weigh a lot

And sometimes there's a lot of tension on a log and when you cut it, it springs into a new position - hopefully you're not in the way


Yep, it's all about concentrating on what you are doing.
Top
Post Reply
15 posts