A buddy and I headed up early Wednesday to climb up to the treeline at Cooper Spur and build an igloo. Unfortunately, there were a couple set backs. The first was careening out of control into a snow bank. We were just a few miles from the turnoff to Cooper Spur from Highway 35. There was about a quarter or half inch of snow on the ground, freshly plowed with gravel. We were being passed by similar cars without chains on. On a straight stretch of road with nobody around us, I mashed the brakes a bit to see how much traction I had. You know, to be safe.

Turns out, I had none.

The back end of my Civic slid out quickly and my attempt to steer into the slide was overdone. We spun 180º and ended up slamming backwards into 3' of snow piled up from the plows. The car was stuck really good on top of compacted snow which took about an hour to dig away. There was some body damage and the driver's side door wouldn't open because of a dented in front quarter panel, but the car was in fine working condition. Cosmetic issues with one non-essential functional issue—a door.

So we continued on. This time, with chains.

We were running an hour behind, and igloos take a long time to build. We left the trailhead on skis by about 10:30. The forecasted blizzard was nowhere in sight, high clouds giving way to blue skies throughout the day. The second set back was that nobody had broken trail past the first mile. Both Ollie and myself were on 125cm "skishoes" called Altai Hoks. They are a short, wide ski with inlaid climbing skins meant to combine the best of a snowshoe with the best of a backcountry ski. They have lots of surface area compared to a typical snowshoe, but the snow was knee deep fresh powder. The hill was steep. And, worst of all, we each had 30 pounds on our back. 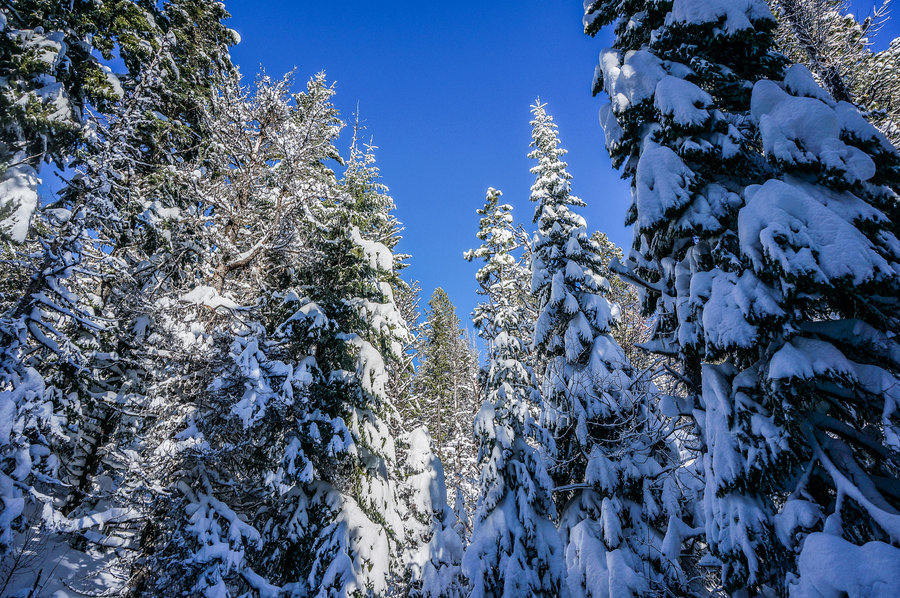 We made it another mile before we were spent. Besides, daylight was burning and we had 6 hours of igloo construction ahead of us. We backtracked down the hill below the burn to build our igloo. With the bad luck we already had, camping among a forest full of widow-makers did not seem like a great idea.

Building an igloo is hard.

We spent an hour compacting the overly powdery snow, waited 45 minutes for it to sinter, and began cutting blocks. We cut 50 or 60 blocks. 4 hours was spent hard at work building up the walls, but we didn't start with an extreme enough angle. The igloo kept going up but the roof wasn't close to being completed in by night fall. So, I found a small snag, cut it to size, and used it as a center pole to hold up my tarp over the igloo's opening. The result was an 8' tall hybrid igloo structure, which was still fairly impressive.

We also had a grand fire. 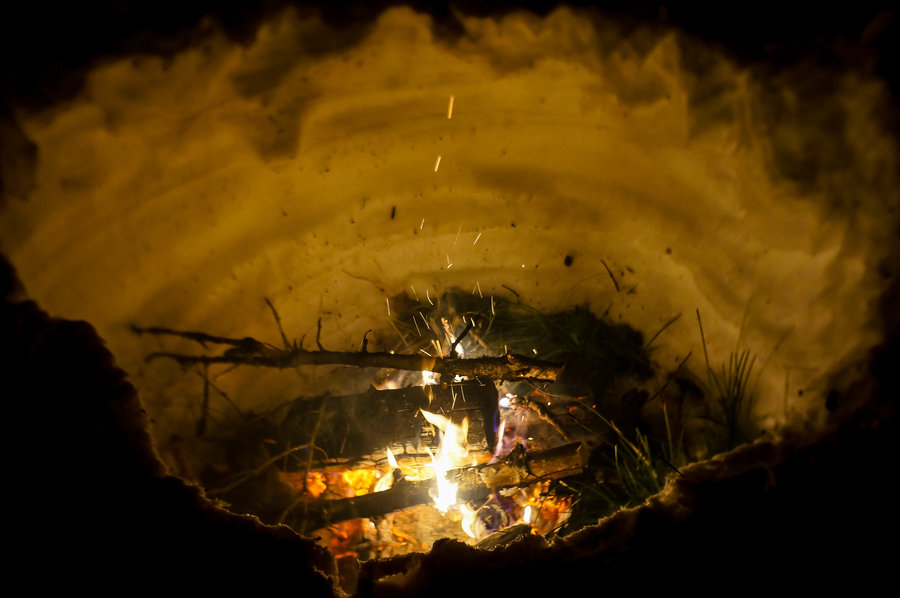 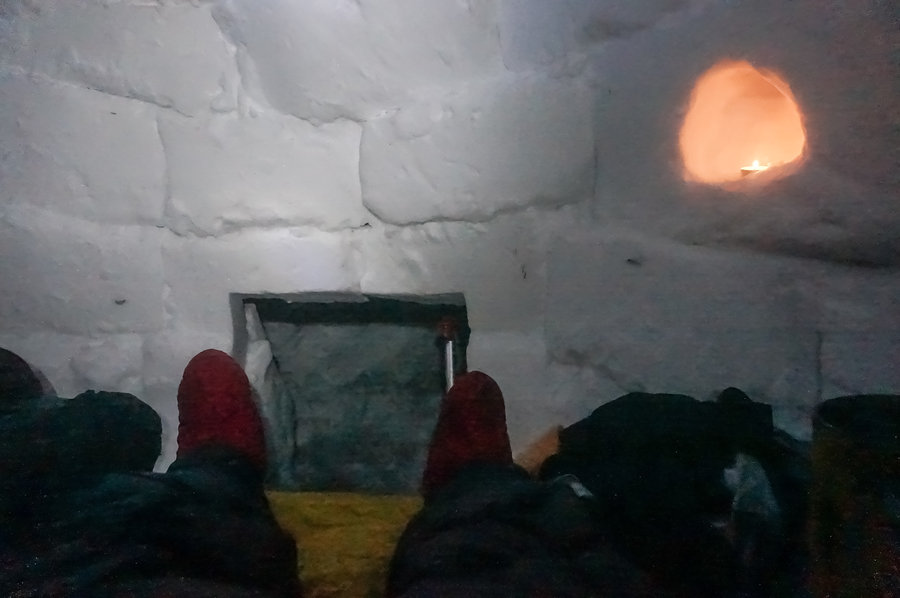 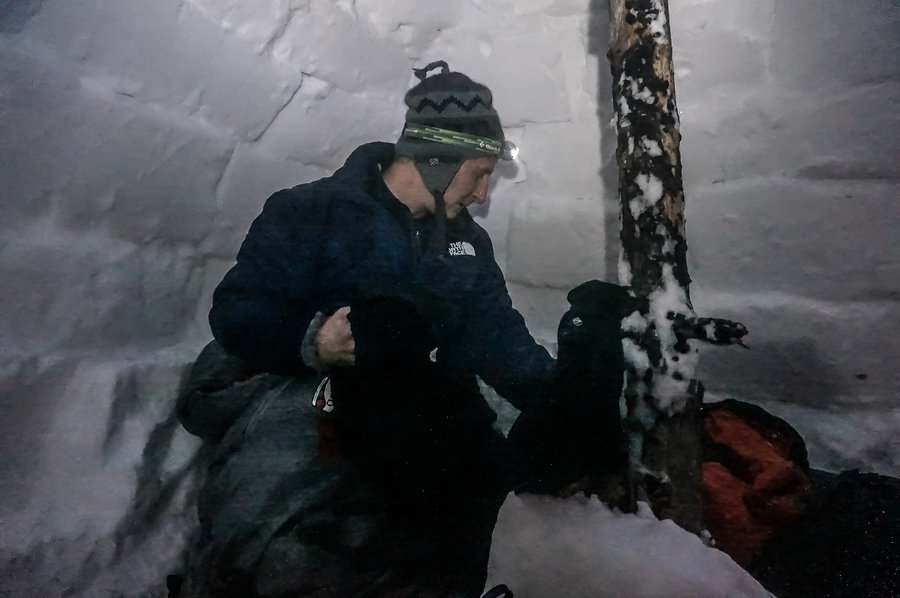 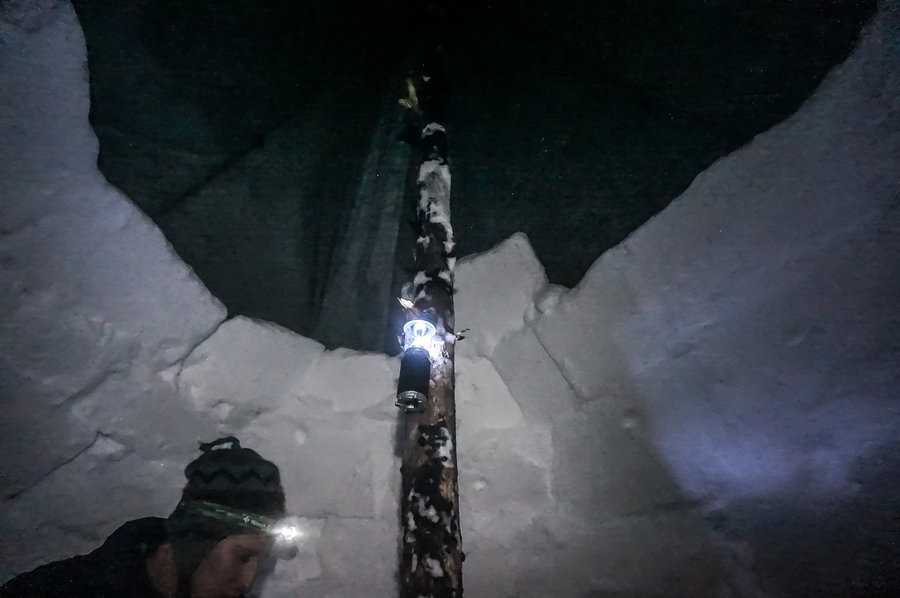 The next morning was glorious with blue skies and no wind. We hike another mile up the burn, made some delightful turns in too-deep snow, reunited with our backpacks at our camp, and skiied back to the car. 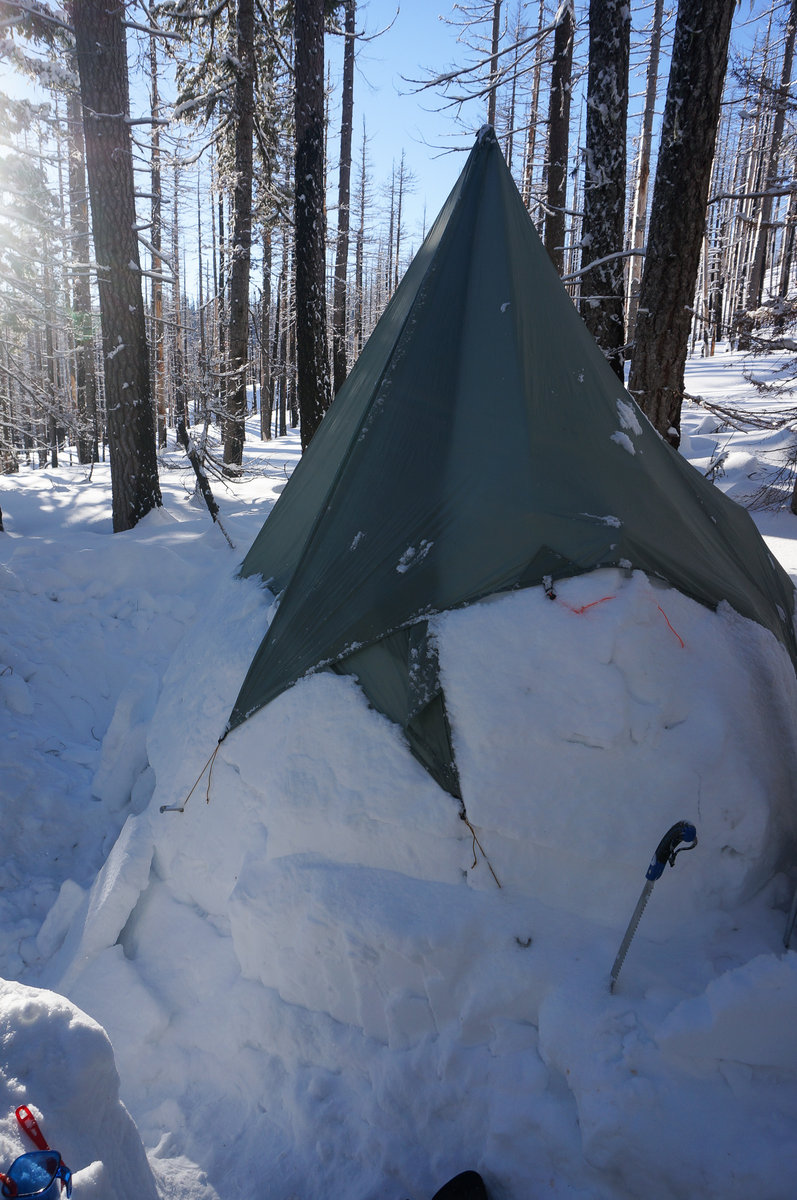 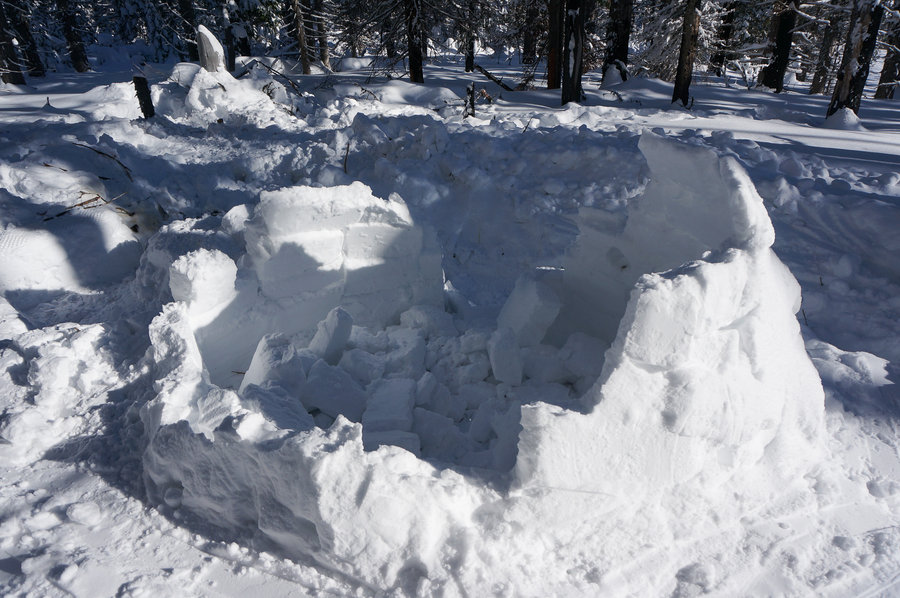 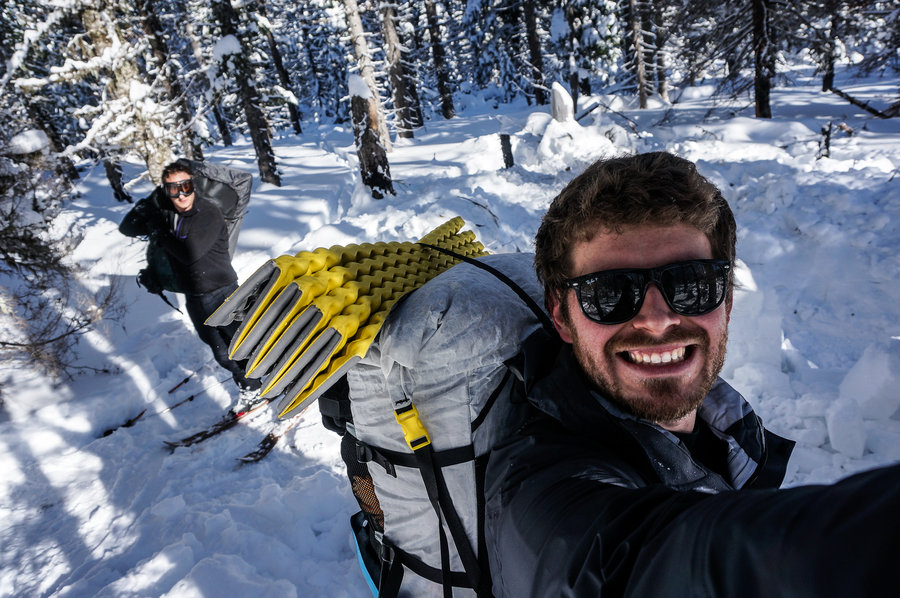 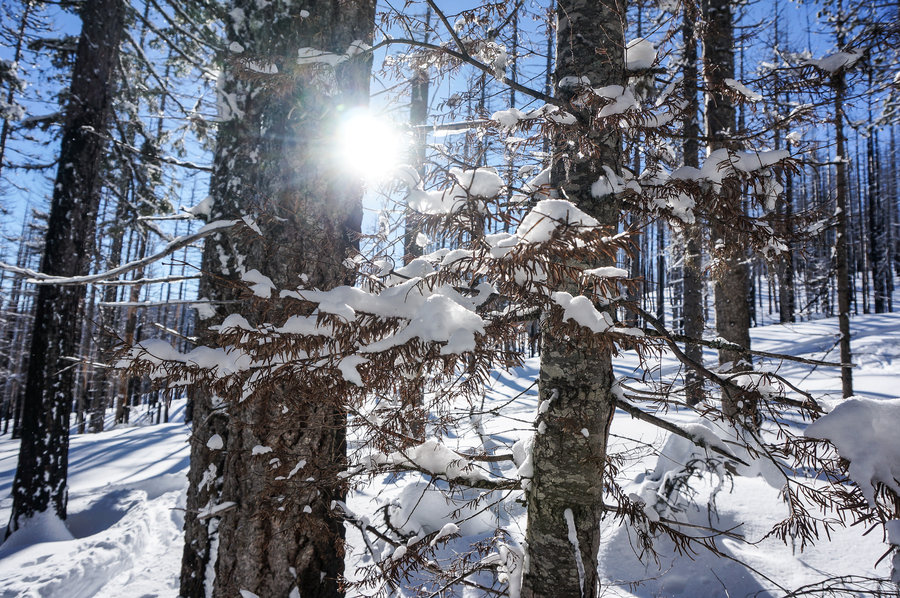 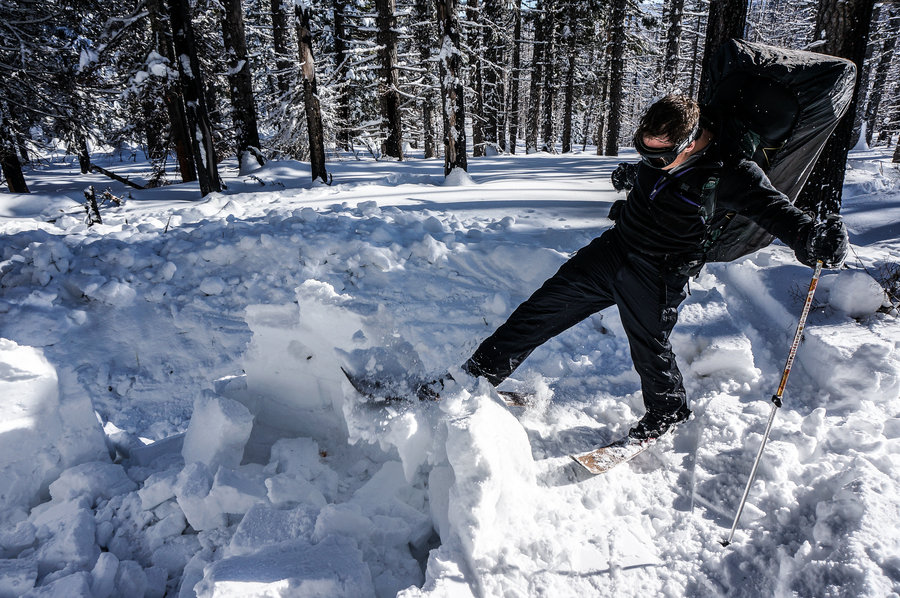 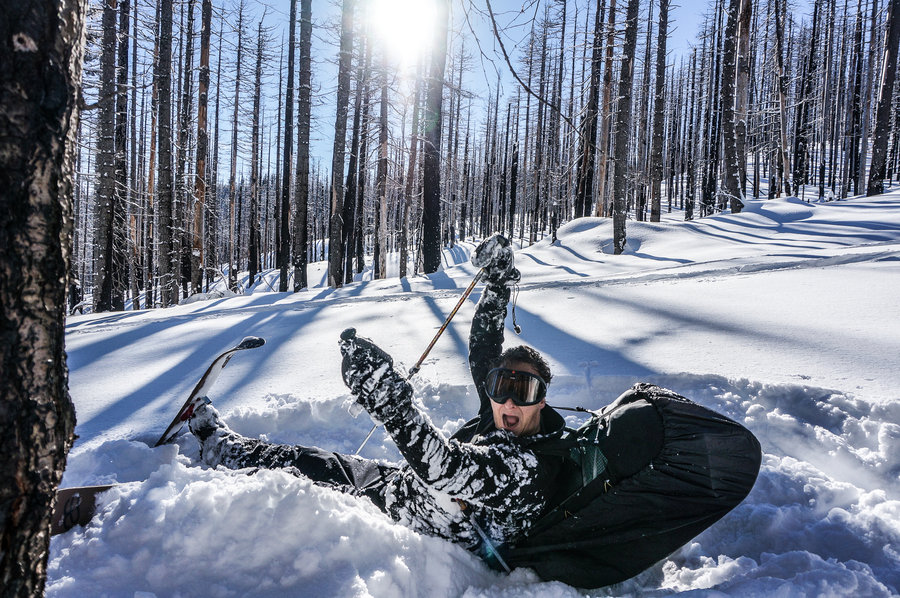 My hikes on Went Hiking, a hiking trip logging and statistics website
Top

Fun TR and story, bummer about the accident but looks like you had a good trip after all. What did you use to cut the snow bricks for an igloo?

I careened almost like this while going to Timberline Lodge last winter, but it was relatively slow (maybe 25-30 mph and uphill), slid from my side of the road to the other, than back to my side and hit a snow barrier. Luckily, didn't have a scratch from this, but it surprised me how difficult it is to re-gain control.
Top

Bummer about the car - but it could always have been worse... I love the tarpgloo, it sure looks like you had a lot of fun on two sunny days.
Some people are really fit at eighty; thankfully I still have many years to get into shape…
Top

There was some body damage and the driver's side door wouldn't open because of a dented in front quarter panel, but the car was in fine working condition. Cosmetic issues with one non-essential functional issue—a door.

saw what was left of it today as we snow shoed up Tilly Jane to the A-Frame and then, given the good weather continued on up to the Cloud Cap Stone Hut at the Timberline Trail. Wonderful day on the east side of the mountain. We got an early start so lots of people still coming up on our way down. Don't know if anyone else admired your handiwork
Top

Peder wrote:Bummer about the car - but it could always have been worse... I love the tarpgloo, it sure looks like you had a lot of fun on two sunny days.

Mirrors my thoughts also. Your adventure looks like a lot of work, too. But worth it!

Great TR and excellent construction! Thanks for the inspiration.
Top

Now that is some good cold fun.
Top

That last photo is great!
The mountains are calling and I must go.
John Muir
Top
Post Reply
10 posts • Page 1 of 1