Needed one more trip to Beacon Rock SP to amortize the Discover Pass - so set off for Hamilton Mtn. Today qualified as a bluebird day for early winter, except for the low cloud banks scudding through the Gorge. Got an early start from the TH, on clear trail with a little mist. 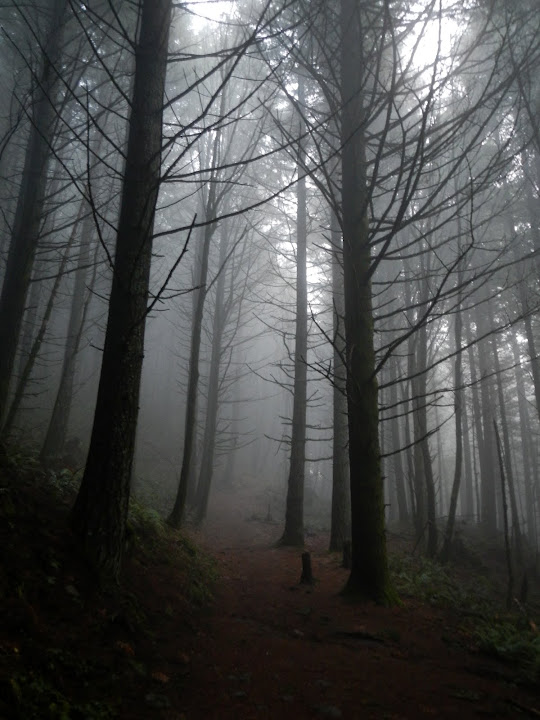 Rodney Falls was right where a I left it a couple of weeks back. 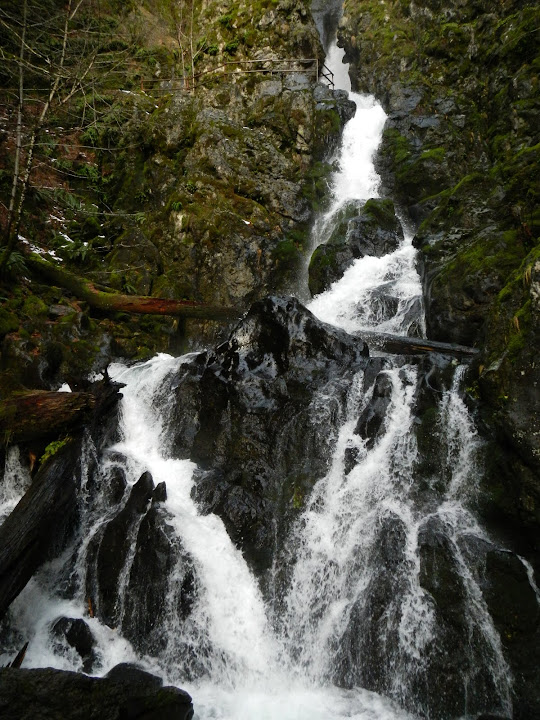 The main Hamilton Mtn trail was largely snow free up to around 1200', with complete, but walkable coverage, starting at about 1500'. Hardy Ridge/Phlox Pt came into view, showing a covering of snow that's probably 2-3' deep at the highest points. 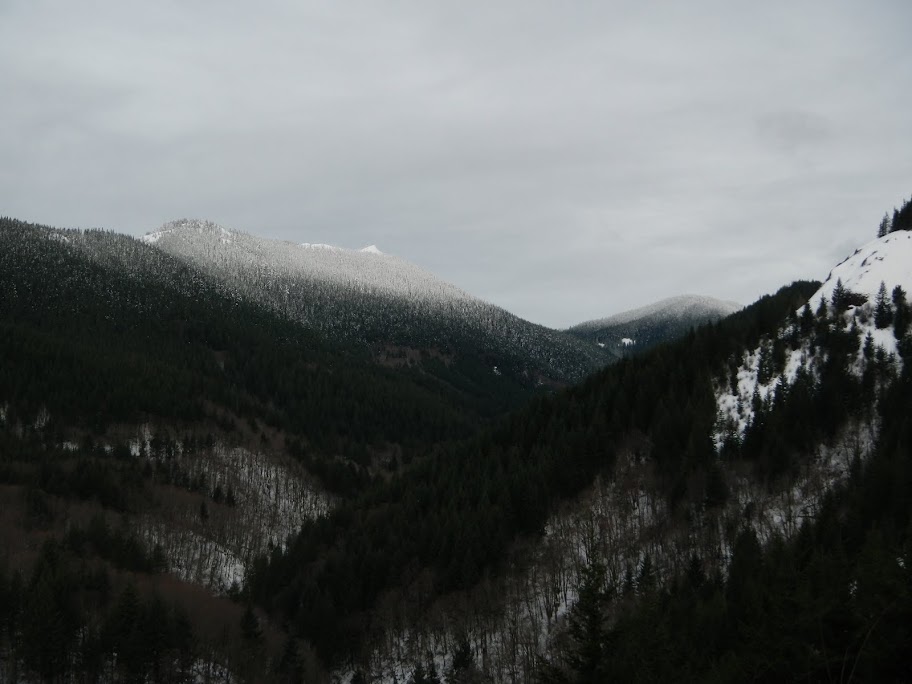 After 20+ years of hiking this trail, I am still fascinated by this cliff face and all the different colors and textures it displays throughout the year. 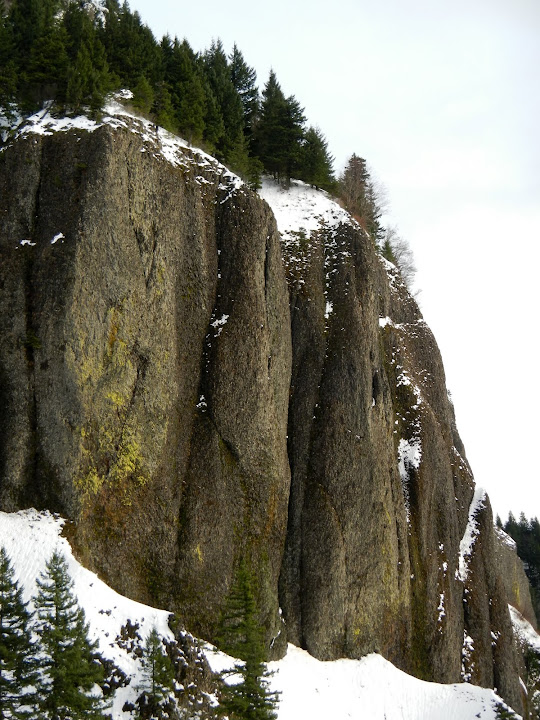 At about 2000', the snow depth had increased to 24" or so and walking was getting a little harder. Hindsight would reveal that not all (or any?) brain cells had been engaged at oh-dark-thirty when I decided to leave the snowshoes behind. 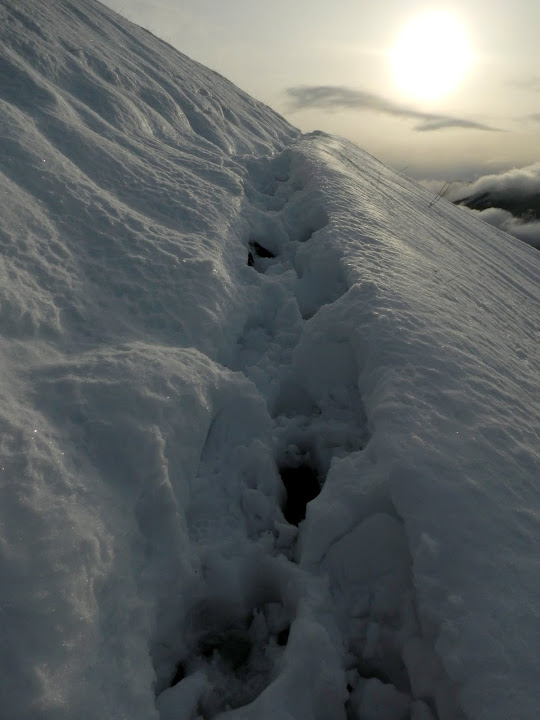 I'd been following some boot and snow shoe tracks, but both ended abruptly about 200 vertical feet below, and 500 feet from, the summit. I continued on, only to find the summit with 3-4' of snow covered by a very breakable crust. Hands and knees for the last few feet. Up to my knees were the snow was shallowest. 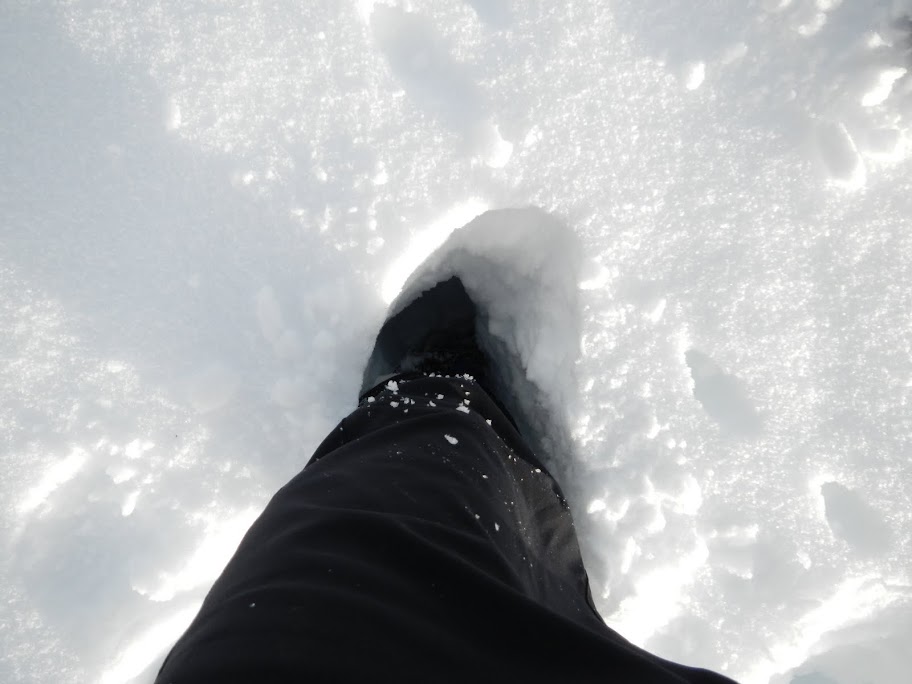 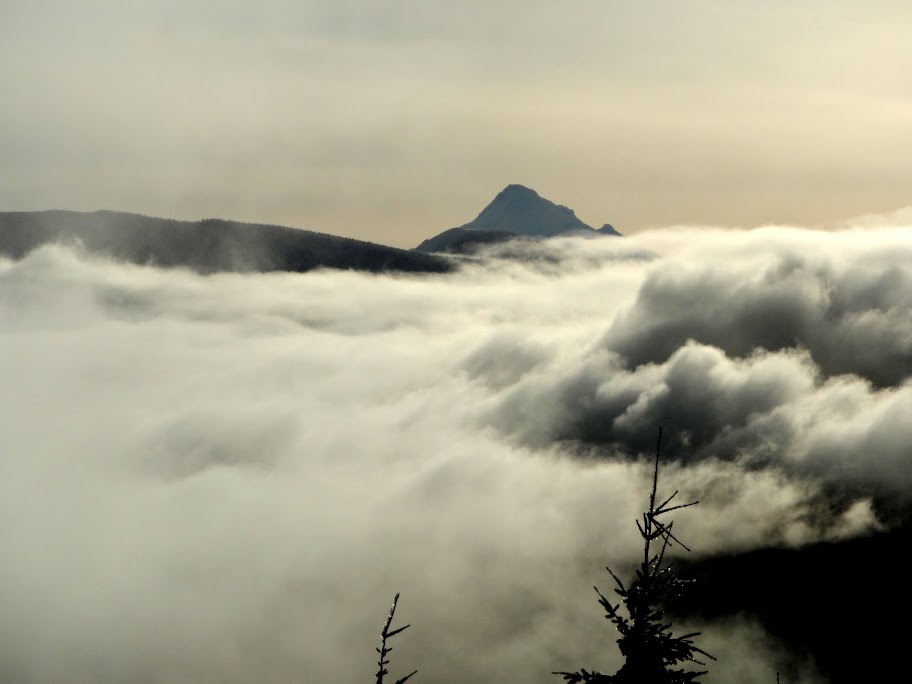 and a very snowy Table were visible through the swirling mists and clouds. 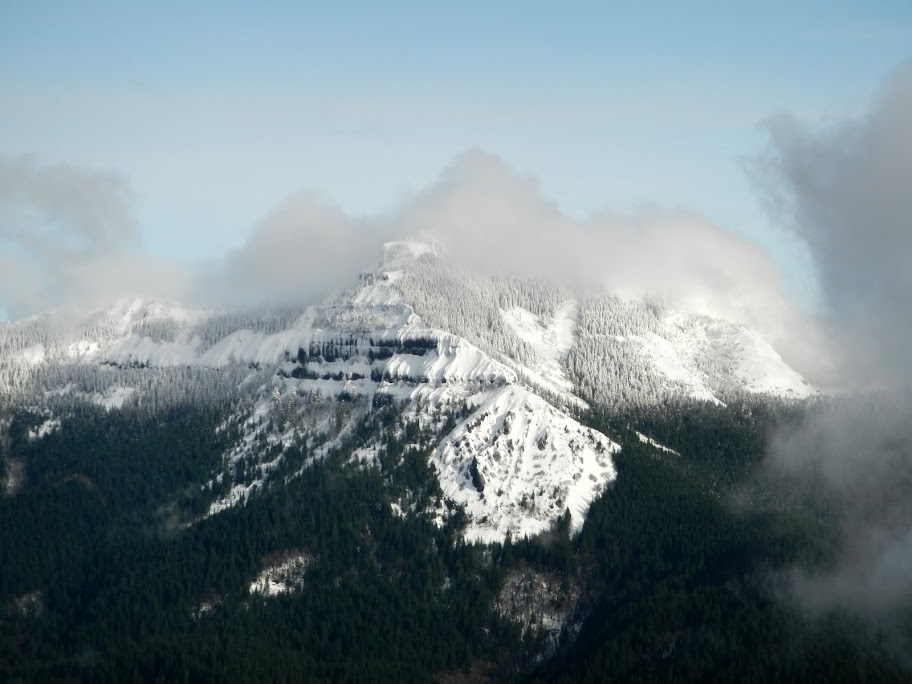 Considering I was already floundering around in deep snow, a little thinking would have suggested going back the way I'd come up. But that would have meant no loop and - gosh - it's not that far to the saddle and the road. So I headed off along the ridge N from the summit, 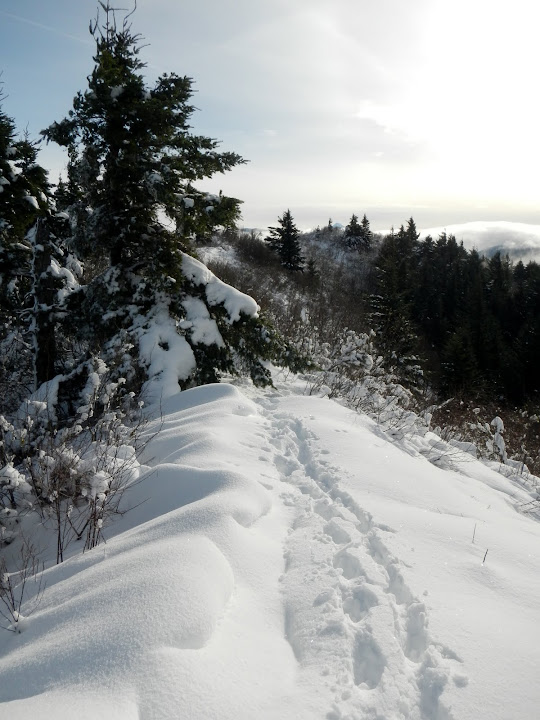 for "fun" with postholes all the way to the saddle and beyond! Mostly knee deep but every so often - surprise! - hip deep. Frustrating and very slow but for a full full-body workout, you can't beat it. Time passed slowly but eventually I reached the saddle and the road, 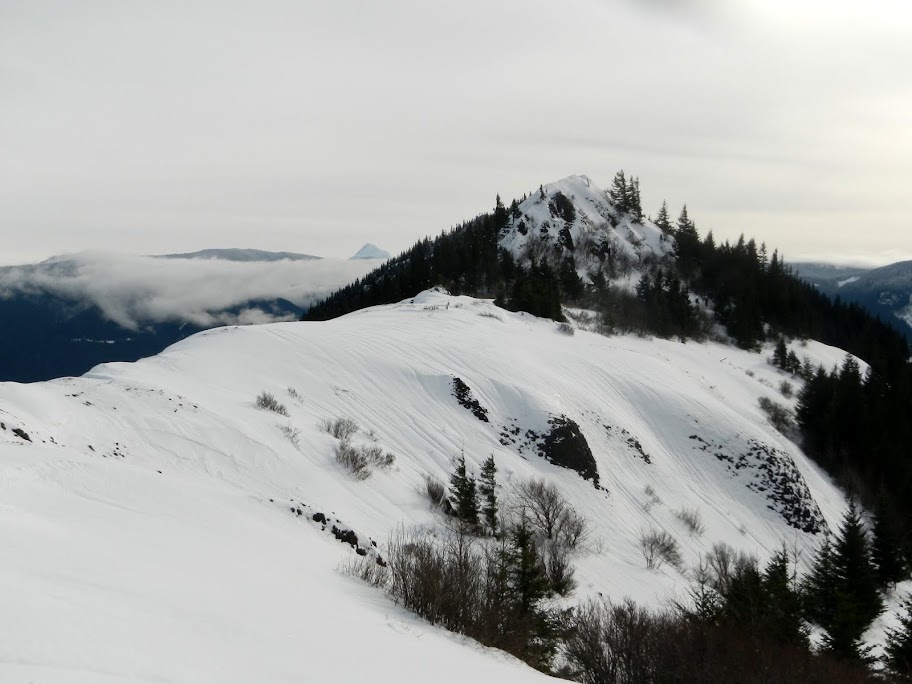 only to find both covered with 2-3' of crusted, but otherwise unconsolidated, snow. The posthoeling continued. I took Don's Cutoff because the snow was thinner and more compacted under the trees, but it was still a slog. This continued all down the road and then along the Hardy Creek Tr back to the main trail. This is the most and deepest snow I can recall finding on the mountain so low down. Heading back to the TH on the snow-free (yeah!) main trail, I could see a snow-covered Munra Point (arrow) across the Gorge. 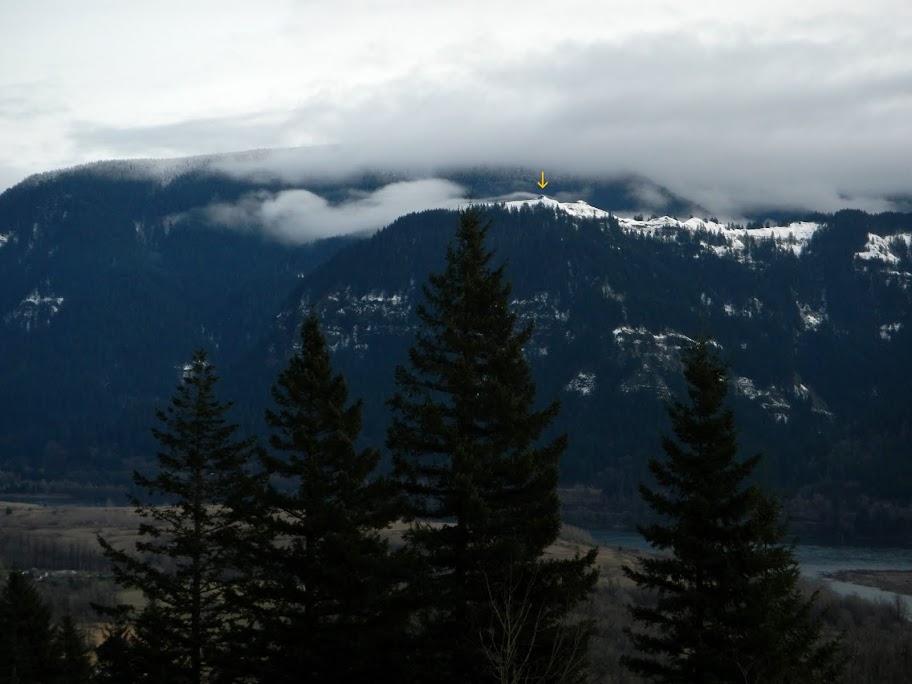 A short hike (7.7 mi RT, 2000' EG) which somehow seemed much, much longer. Now I know why they invented snowshoes. 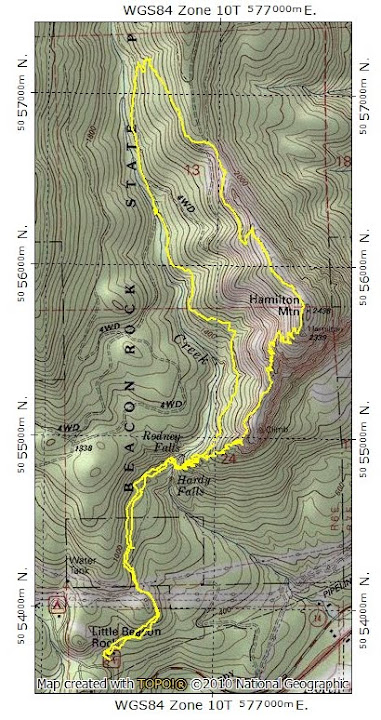 I think even with the snow shoes hikers are still posting right now, hope it hardens up around
those parts by Sunday

damn! wanted to go for a longer loop, snowshoe-less this weekend.
i love snow. most of the time...

thanks for the TR!
bad knees rules everything around me.
Top

Thx for the report, nice photos, and breakin' trail - from this report and others the snow so far is just not set up nicely for any kind of travel even snowshoes - need some rain to add some moisture and some freeze/thaw cycles. Snotels show lots of depth but not a lot of water content.

Pablo, you're a genius! I was thinking all that was needed was a few nights of sub freezing
temps. to help solidify the recent powder!
Top

Wow, that's a lot of snow up there! I didn't expect that much, from what I've seen elsewhere. Well, besides lots of good exercise, you got some really great photos out of it, too!

Eric Peterson wrote:Pablo, you're a genius! I was thinking all that was needed was a few nights of sub freezing
temps. to help solidify the recent powder!

Ha! My genius plan is for everyone else to break trail for me all through the gorge, pack the snow down real nice and then maybe I can go out and do Defiance in my penny loafers.

I think even with the snow shoes hikers are still posting right now, hope it hardens up around
those parts by Sunday

As Pablo notes, there hasn't been the weather (yet) needed to settle the snowpack. It'll be breakable crust over fluff until then. I'll have my snowshoes on this Sunday but still expect to get more exercise semi-floundering.
Top

wow VM that is a lot of snow! Full body workout for sure.

Great shots of the hills. I especially like the shot around the saddle, with all that snow.

I was thinking about my Discovery Pass as well, and wondering when it expires... maybe I need to squeeze a trip or two out of it still.
Jim's Hikes

if i recall, the nw forest pass doesn't include discovery only fee areas, correct?
bad knees rules everything around me.
Top
Post Reply
15 posts