Third times a charm. I'd hiked Little Huckleberry in July (Little Huck #1) and was drawn to its NE ridge. Some study of old maps showed a trail (the Cougar Way Ck Tr) along the ridge in 1957 but gone by 1983. Last weekend, I hiked the peak again (Little Huck #2) with the intent of exploring the ridge, but was turned back by the weather. Today seemed like the last chance to explore the ridge before the snow really piled up. It was a cold (30s), generally overcast day - but with sunbreaks - and a light dusting of snow greeted me at the TH. 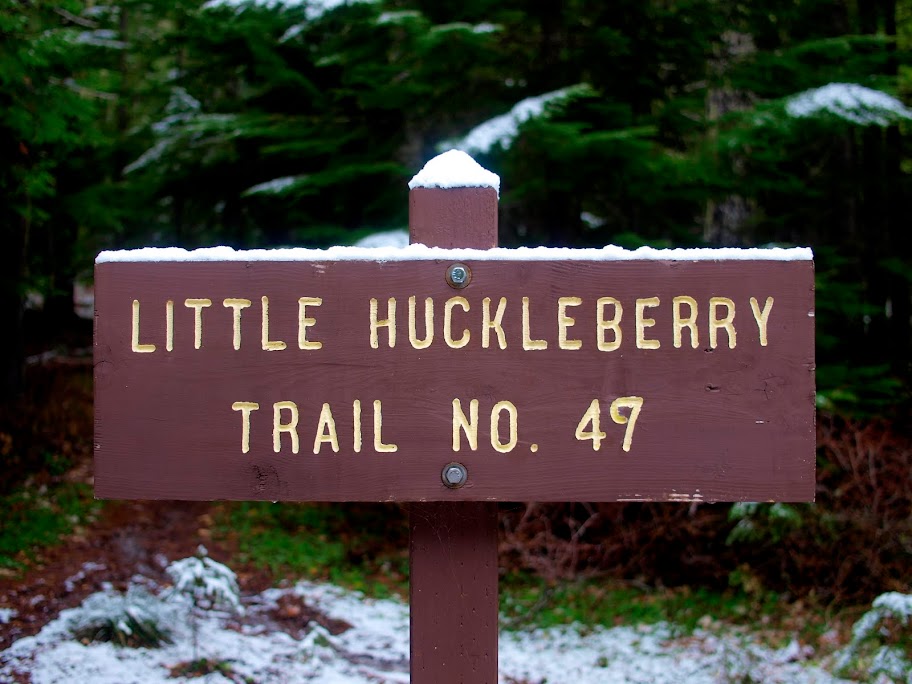 Although the snow got 3-4" deep near the summit, 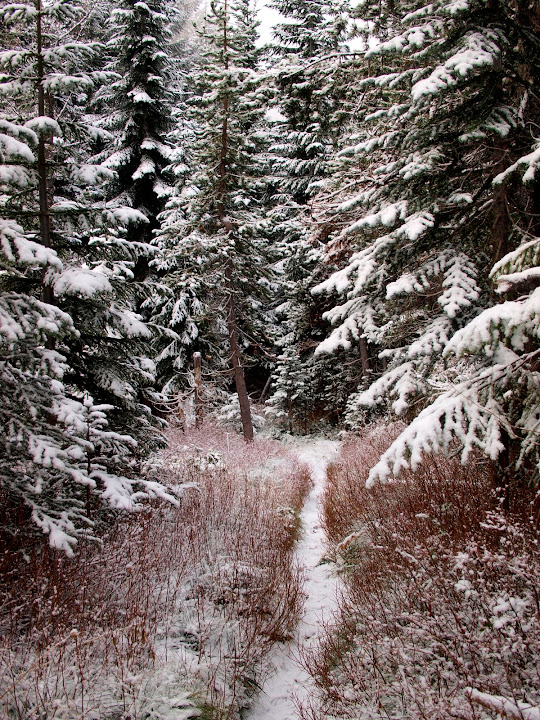 it wasn't an impediment or a challenge to routefinding. It had been a very gentle snow fall, allowing the flakes to gather on the back of a leaf in the direction from which they came. 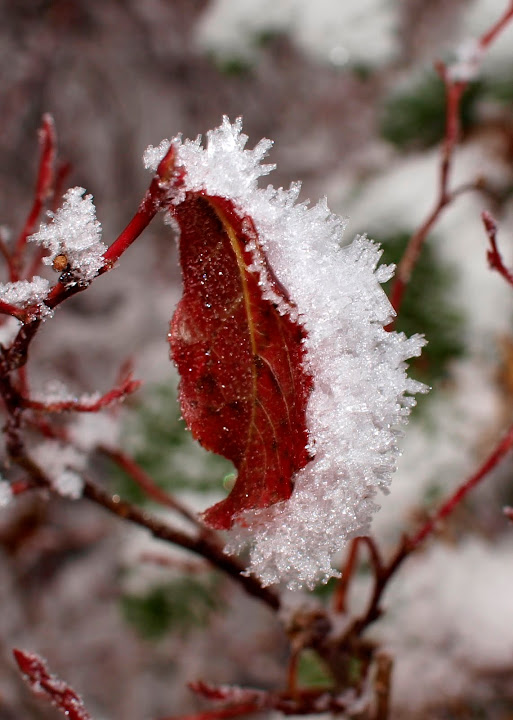 The summit was socked in (again) so I just kept moving. Dropping off the summit to the NE, I found a pretty clear but sketchy track on the crest of the ridge. It came and went through new trees and old blow down but as long as I stayed near the crest, I'd eventually run across it again. 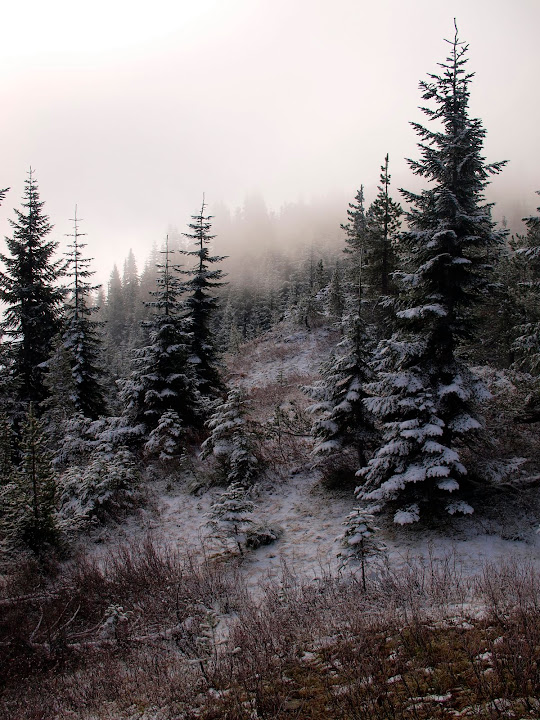 Looking back from Pt 4709 on the NE ridge, I could see the sun struggling to break through the clouds. 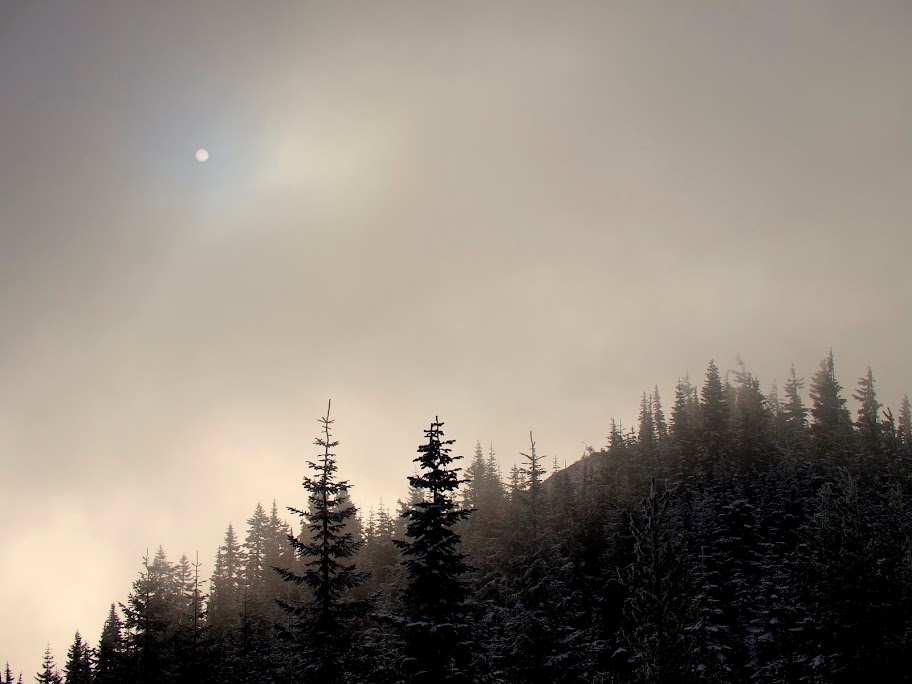 Down to about the 4000' level, the ridge has open stretches with forest on one side and heather meadow (which makes for easier travel) on the other. 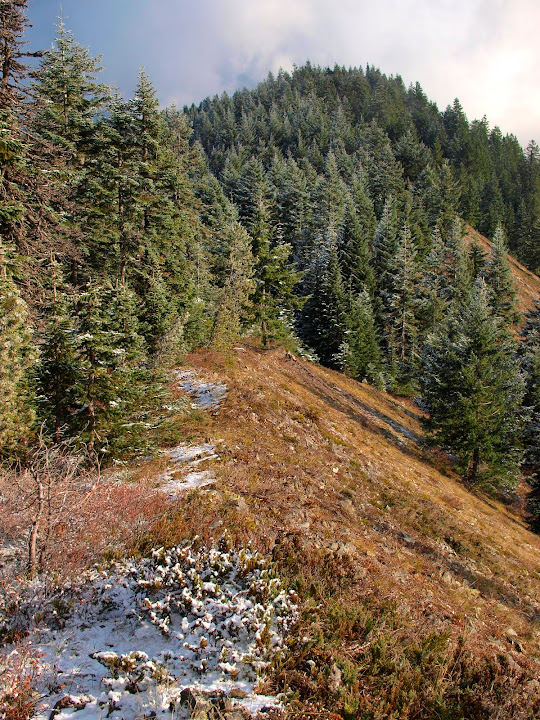 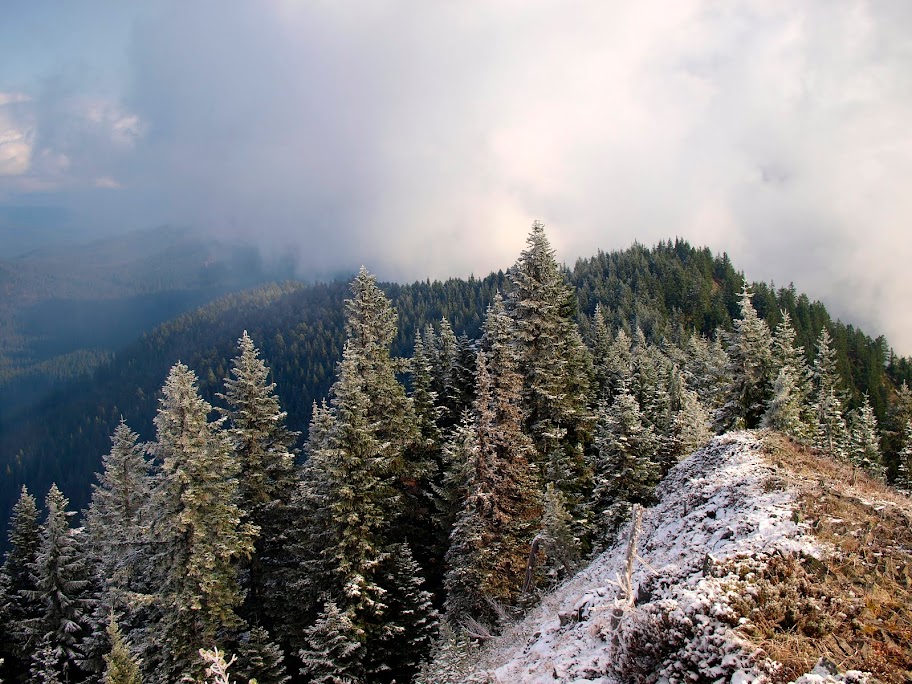 I had a view of South Prairie, 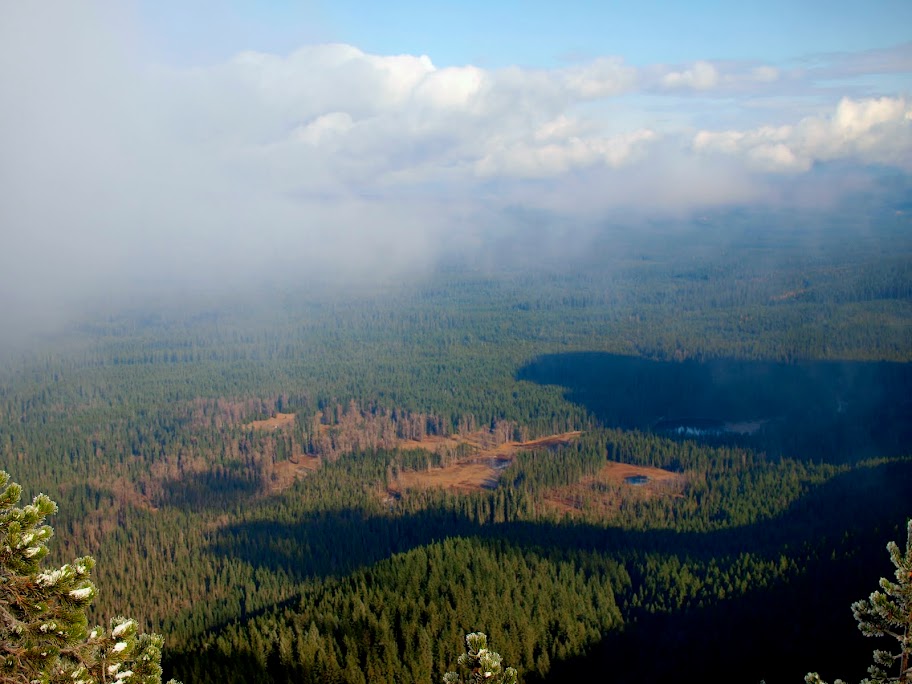 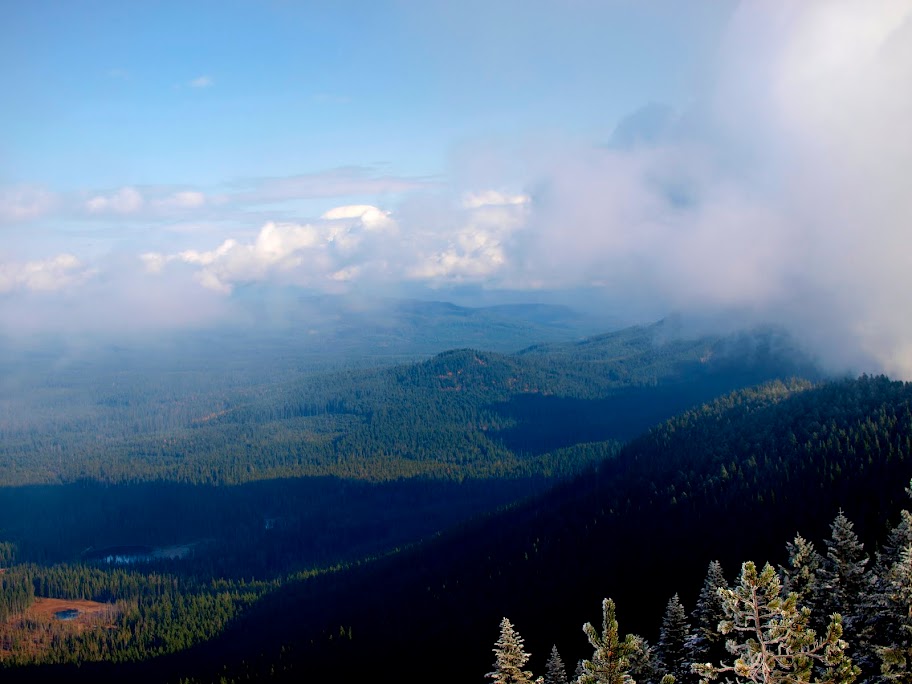 back toward the summit of Little Huckleberry, still shrouded in mists, 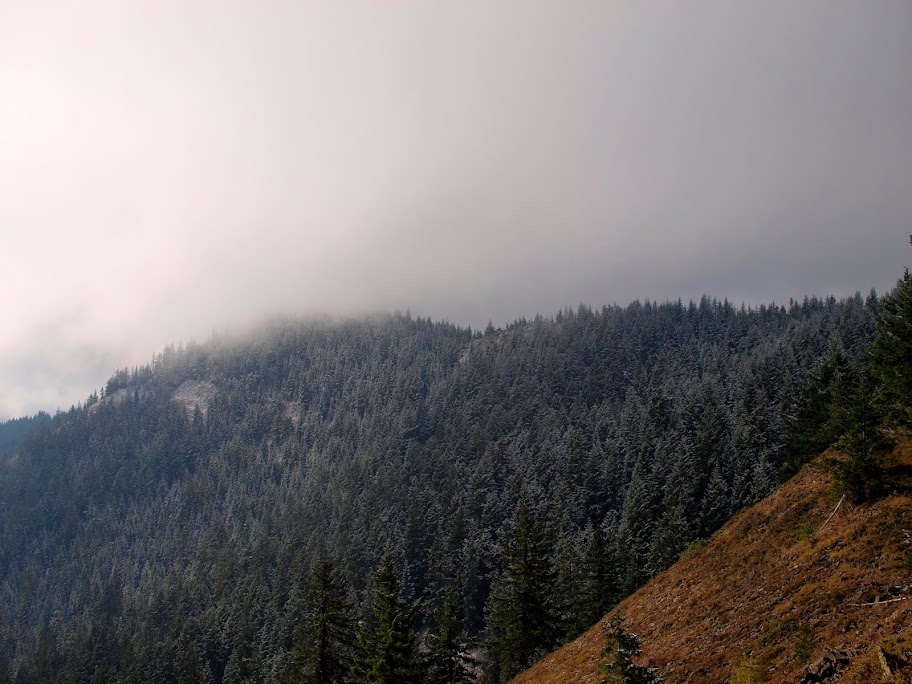 and of troubled clouds beginning to encroach on the valley to the E. 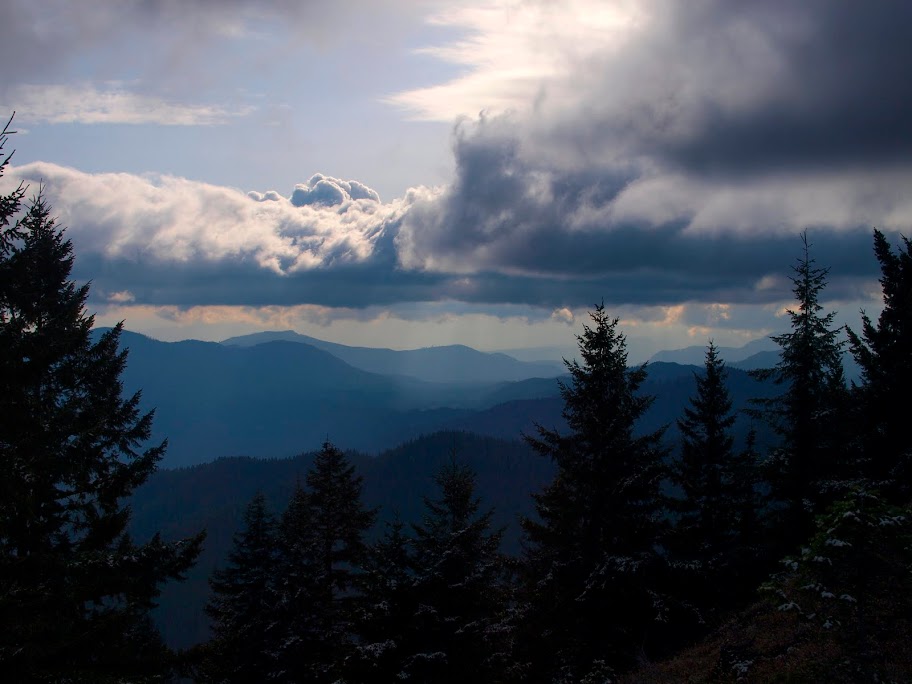 The general rule is to follow the ridge but at 4400' and again at 4000', the main ridge goes subtly to the left (W) and it's easy to drift right (E) on what looks like, but is NOT, the main ridge. It would be pretty easy to get far down into the upper reaches of the Berry or Lusk Ck drainages before realizing that you'd missed the ridge. At about 3600', I reached a well-abandoned road, 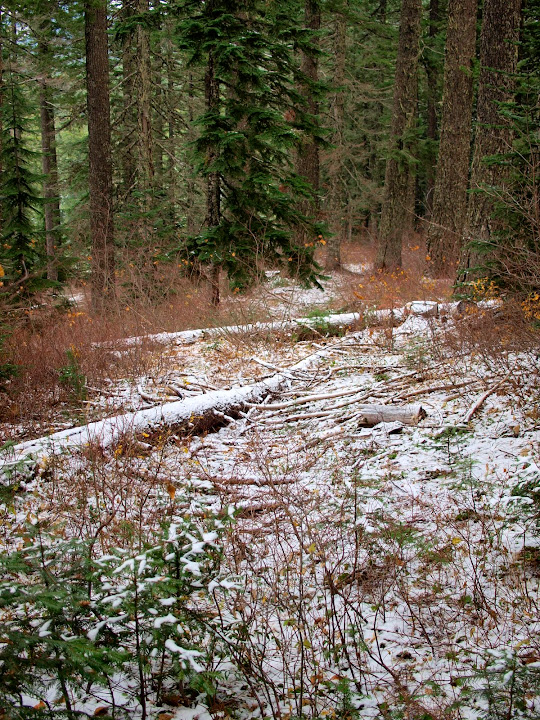 that I followed down to a well used road at the main saddle on the Monte Cristo Ridge. Any evidence of the old Cougar Way Tr had disappeared by this point. 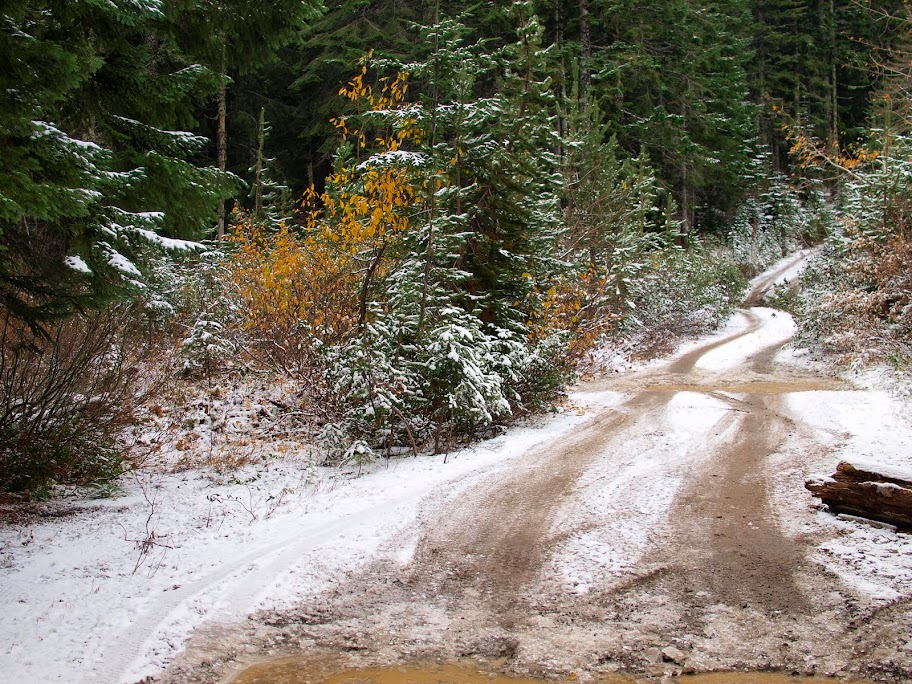 From there, I followed more logging roads, 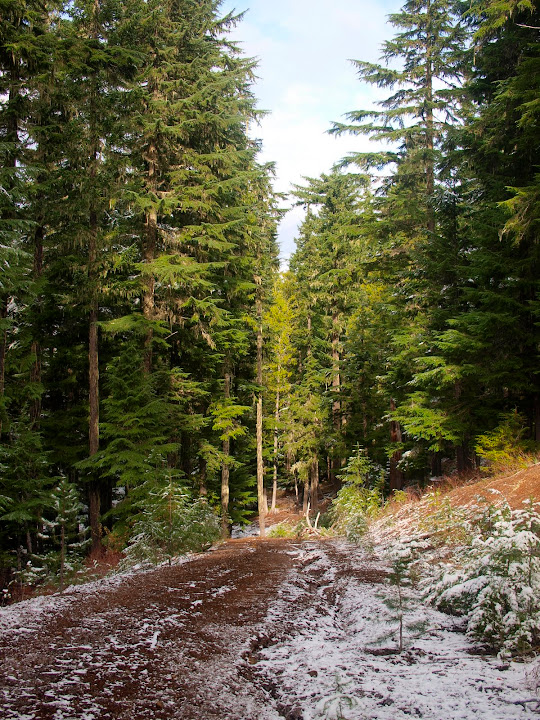 back to FR 66 and the TH. Walking a road isn't that exciting, so my attention got diverted by an old log, 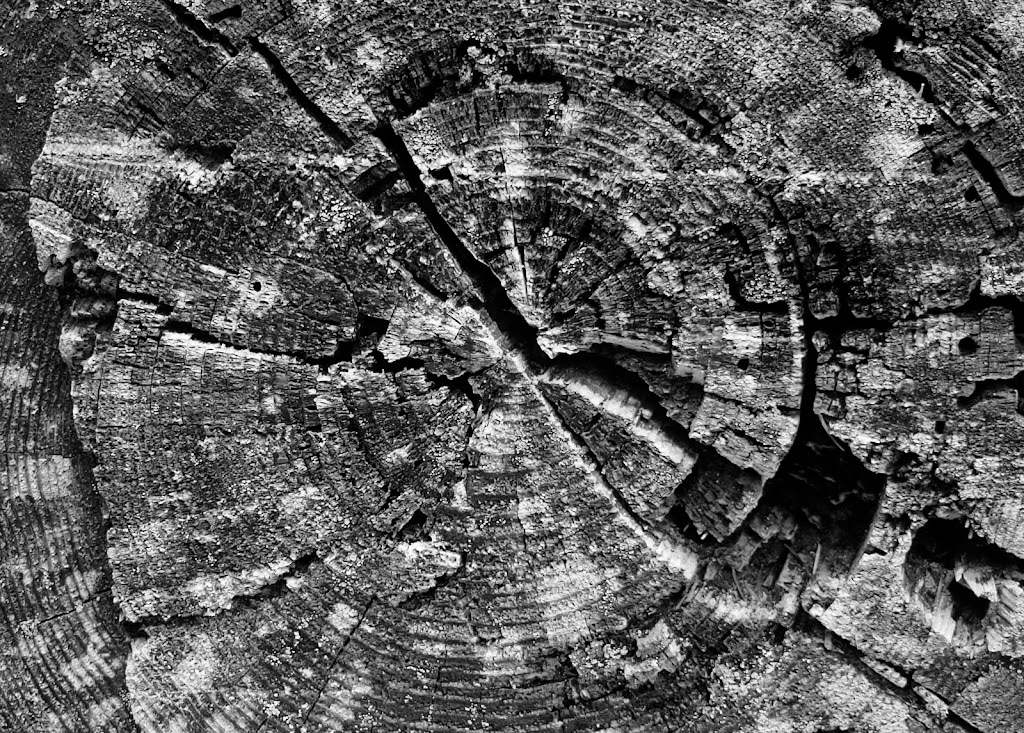 and a small pond. 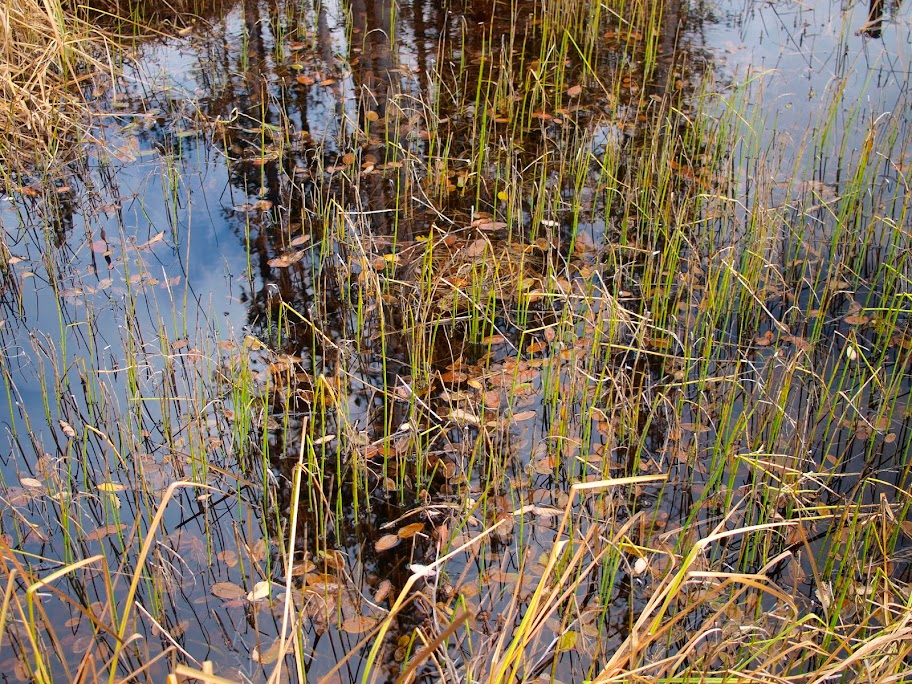 A short hike (7.2 mi, 2300' EG) on a short day but something new, some fun routefinding, and an interesting bit of history. On the map below, the yellow tracks are the now long abandoned Cougar Way and Little Huckleberry trails, while the red track is today's hike. 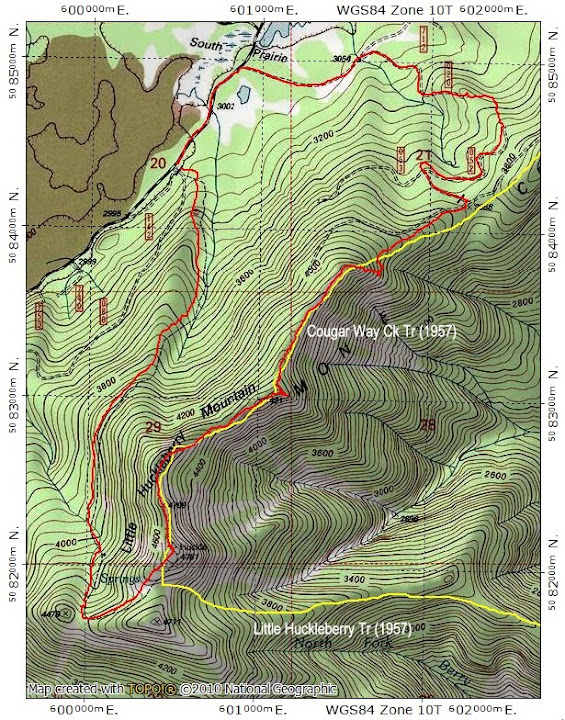 Congrat's on completing this loop.

I love the pictures of the sun poking through and from the ridge, and the snow adds that wonderful winter touch. I don't believe hikes get any better than this. You've convinced me to put this on my "must do" list. Thanks!
Top

Thanks for the pictures and for tracking this route. It's makes Little Huckleberry a little more appealing knowing there's a loop that's not just a pure bushwhack.

So did the Cougar Way go all along the ridge to Monte Cristo?
Top

bobcat wrote:Thanks for the pictures and for tracking this route. It's makes Little Huckleberry a little more appealing knowing there's a loop that's not just a pure bushwhack.

So did the Cougar Way go all along the ridge to Monte Cristo?

Back in the day (1957), the Cougar Way Creek Trail went NE all along the ridge to a dirt road that came up Cave Creek from the E. The W side of the ridge hadn't been logged and there were no other roads.
Top

Great report, Van - thanks for posting!