I found an old copy of Mel Hansen's 1977 Indian Heaven Back Country at Powells a while back. In it he shows several what he calls "abandoned trails" - one of which is shown running from Chenamus Lake to Junction Lake (the dotted line next to the "9"). The last time this trail showed on any USGS map was 1931, so exactly when it was "abandoned" was unclear. 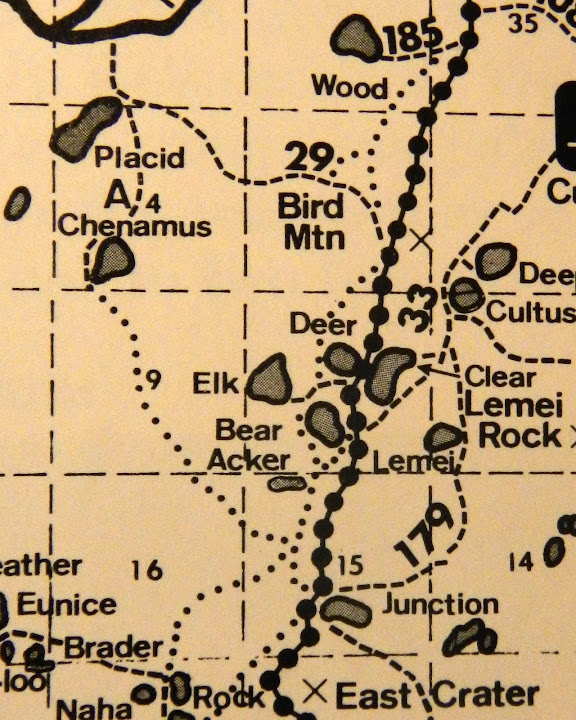 If this trail existed, it could be combined with the PCT and Tr 29 to make a loop past Junction Lake. Had to explore this option. So this near-perfect Fall hiking day - breezy but sunny and crisp - found me leaving the Placid Lake TH and heading toward Chenamus Lake on Trails 29 and then 29A. 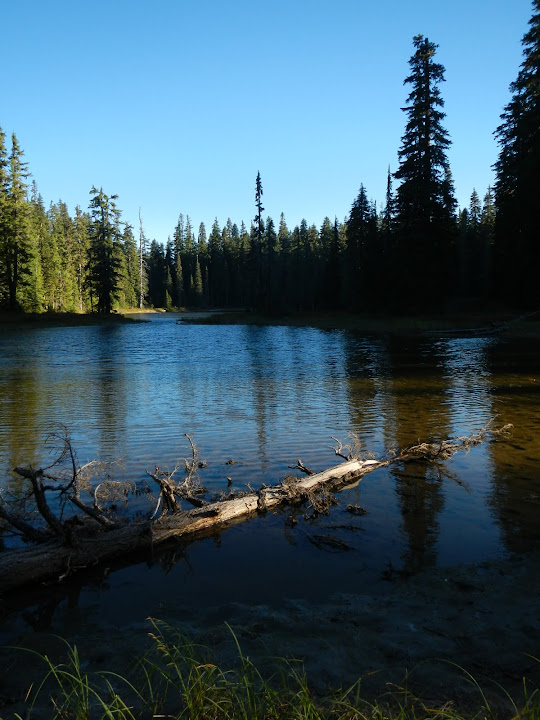 As I rounded the lake to the S on Tr 29A, it became obvious that this trail didn't stop at the lake and was not at all hard to follow on into the woods and beyond. From here to Junction Lake there were a few minor sketchy spots but, for the most part, this "abandoned" trail was in better shape and as easy to follow as some unabandoned trails. It wandered SE through the forest, skirting one major water feature, 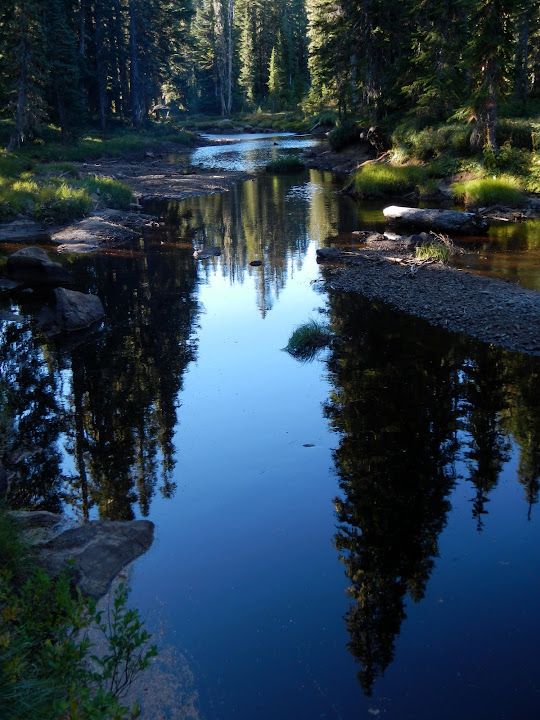 then crossing above it where, due to the lack of rain for several months, was not hard to cross. 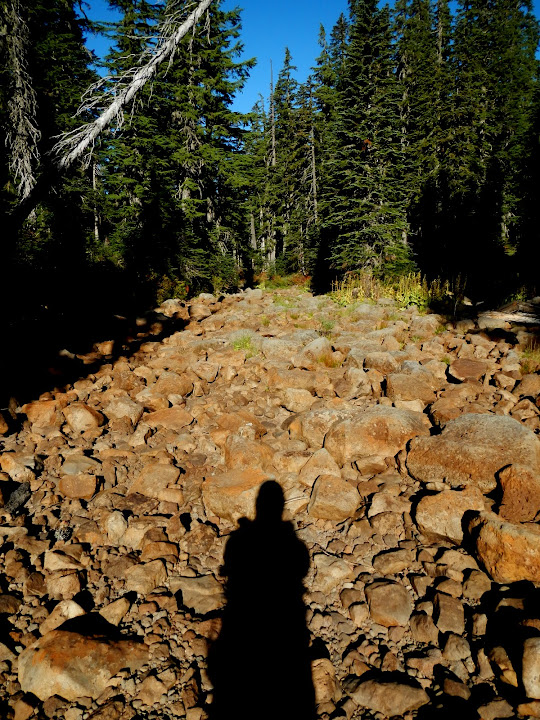 This trail must have been "official" at some point, because it still has one of the yellow painted posts used to mark trails - like the CCT - back in the day. 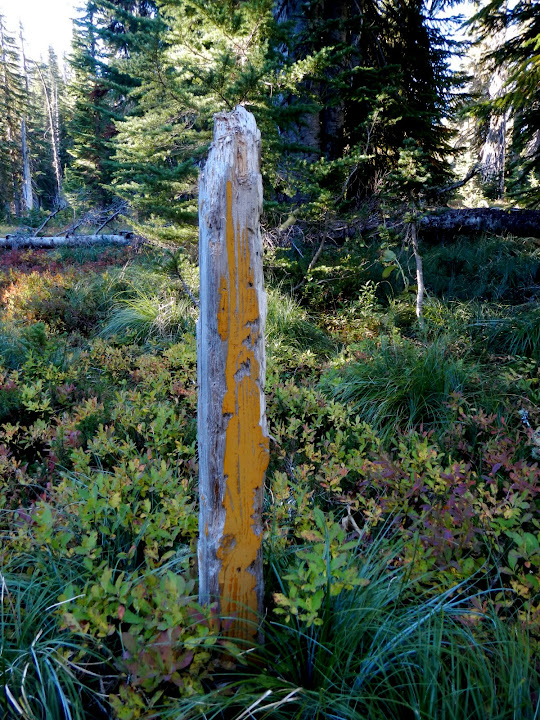 It crosses the old CCT trail in a huge meadow below East Crater, 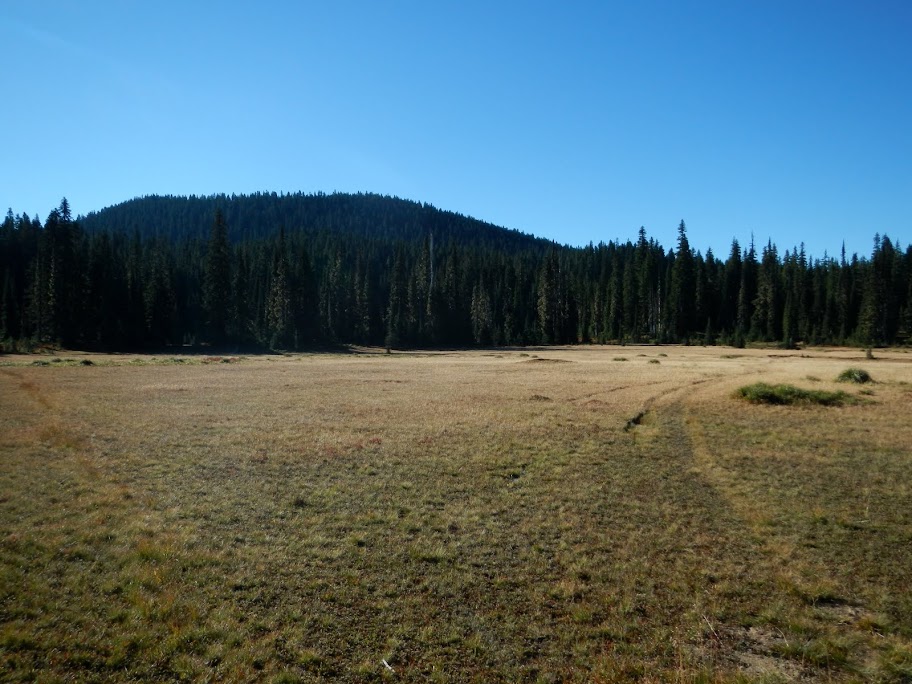 and continues on from there for a short distance to connect with the PCT at the NW end of Junction Lake (the arrow points to the wooden PCT emblem). 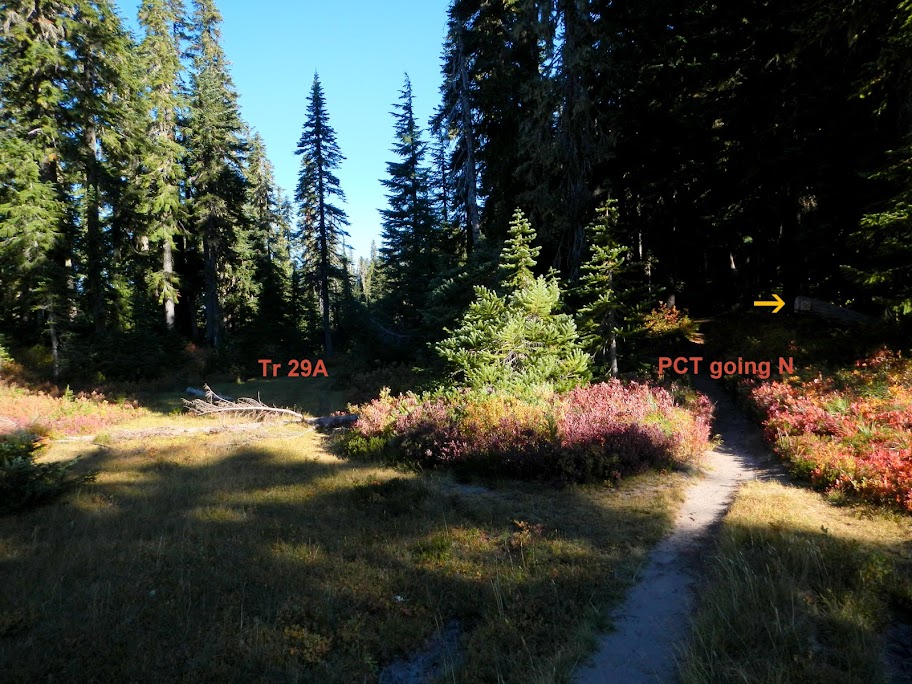 I'd expected to spend half the day route-finding this trail and thus was a little surprised to arrive at Junction in only an hour! It was good to see that there is a new bridge across the muddy water feature/trap at the outlet of the lake. 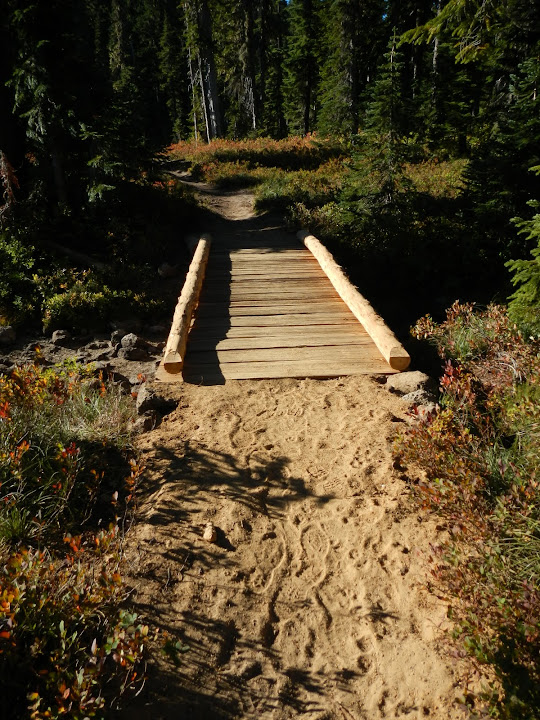 To fill out the day, I decided to hike up East Crater. I went straight up its N face to the rim, where I found a dim use trail, which I followed around to the E to get a view of Sleeping Beauty and Adams, 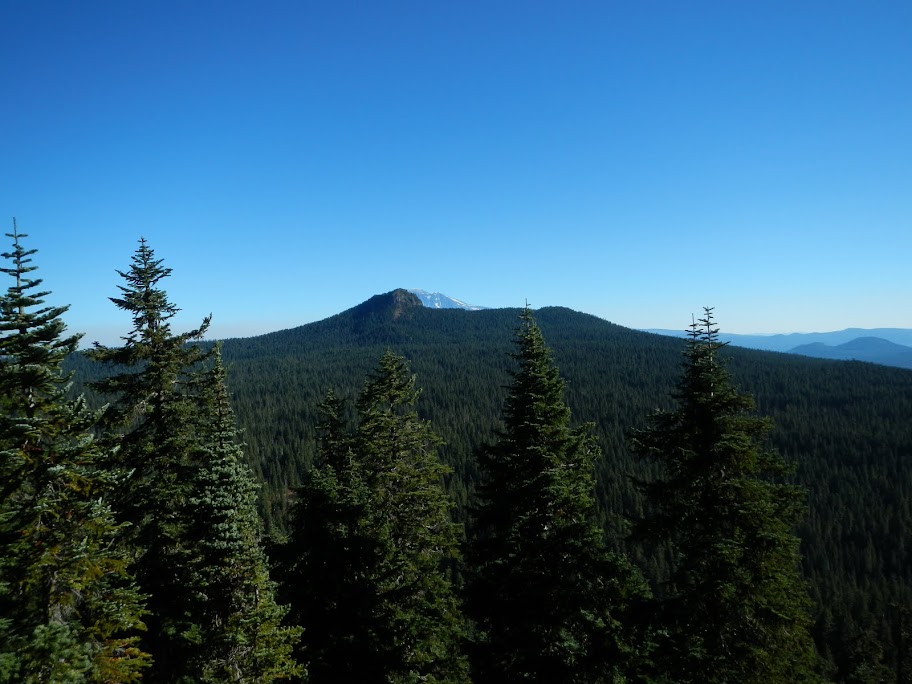 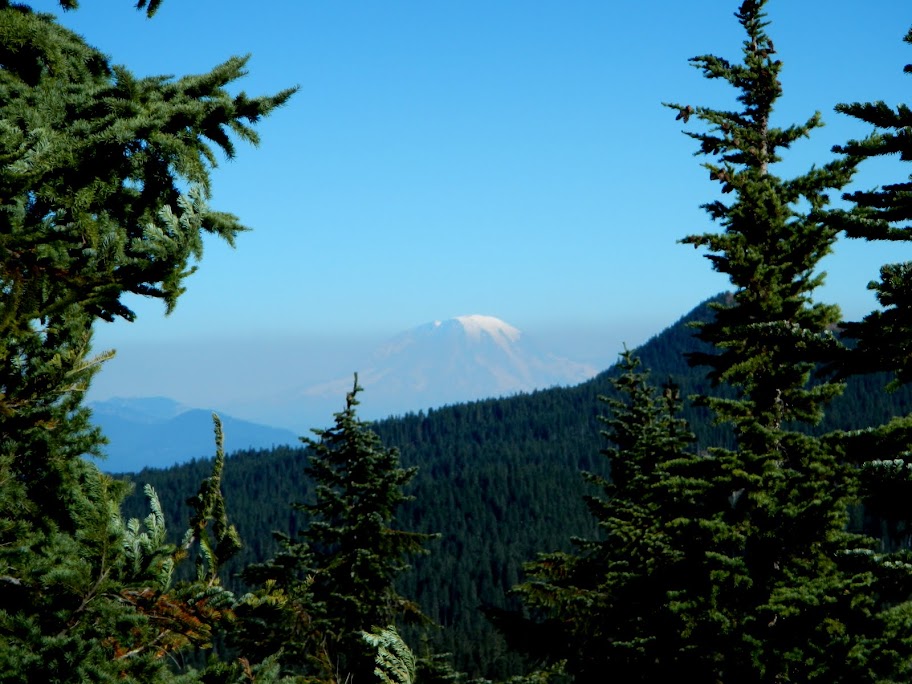 I'm not sure about the status of the Cascade Creek fire, but the strong wind that blew all day seems to have pushed any smoke away from the Wilderness, so the views were pretty good. Continuing around the rim, I came to the E summit. 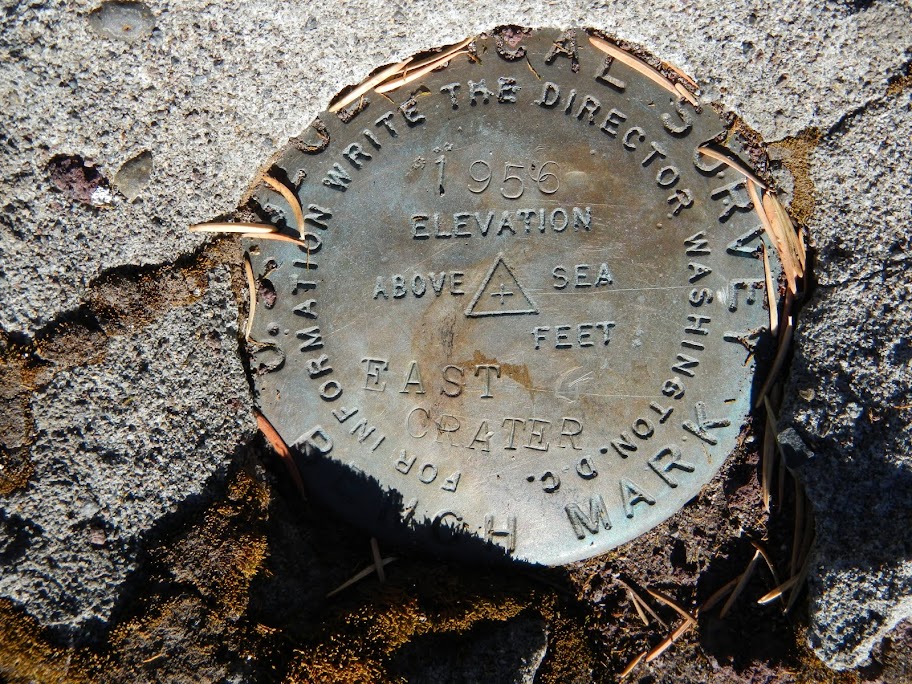 Thinking that the use trail might lead down the crater to the PCT, I followed it back around to the W summit, which offered views of Hood, 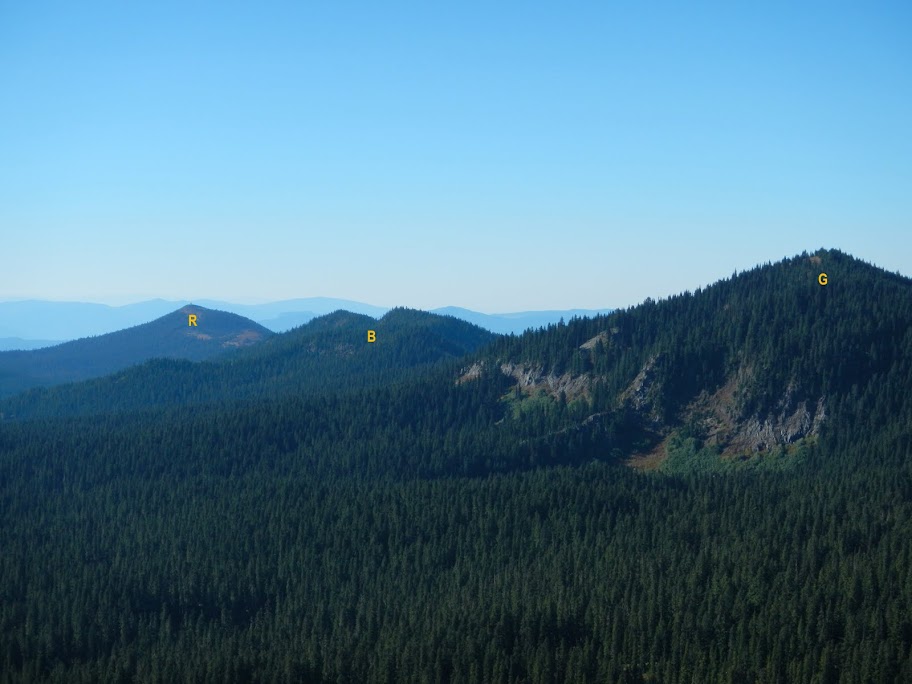 and the LO on Red Mtn. 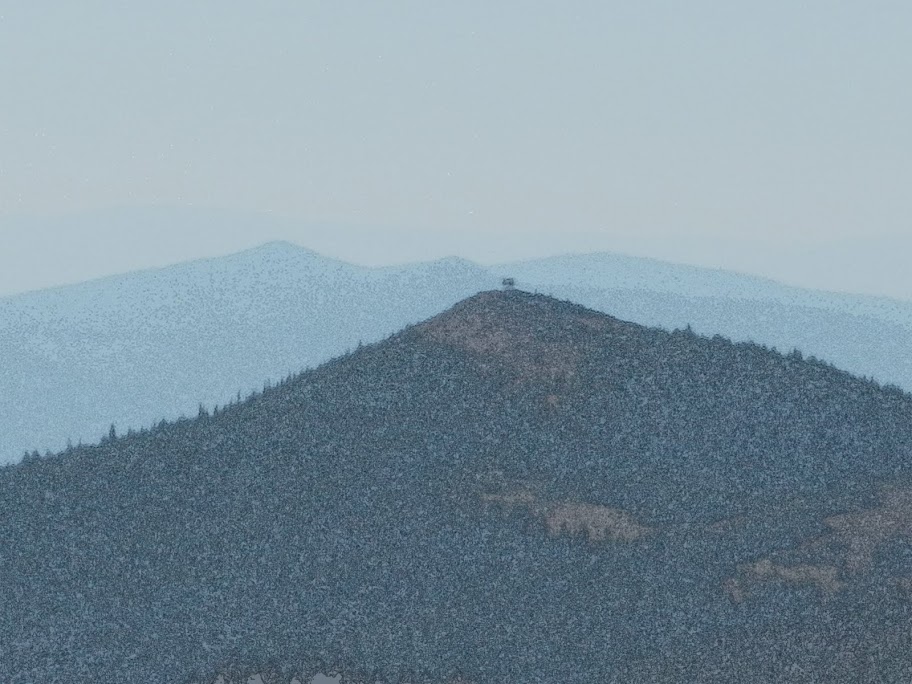 After the W summit, the use trail largely disappeared and so I headed XC directly down to the PCT, which took me back to Junction Lake for lunch. 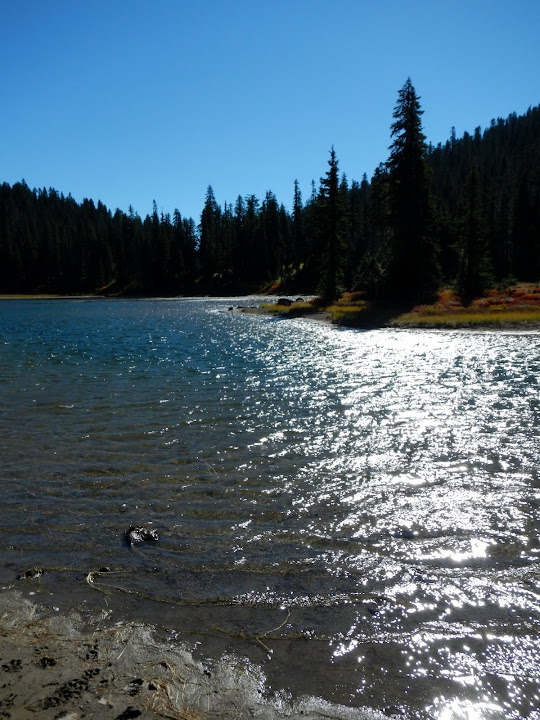 After lunch, it was N on the PCT to the Placid Lake trail (#29), which I followed through fields of Fall colors, 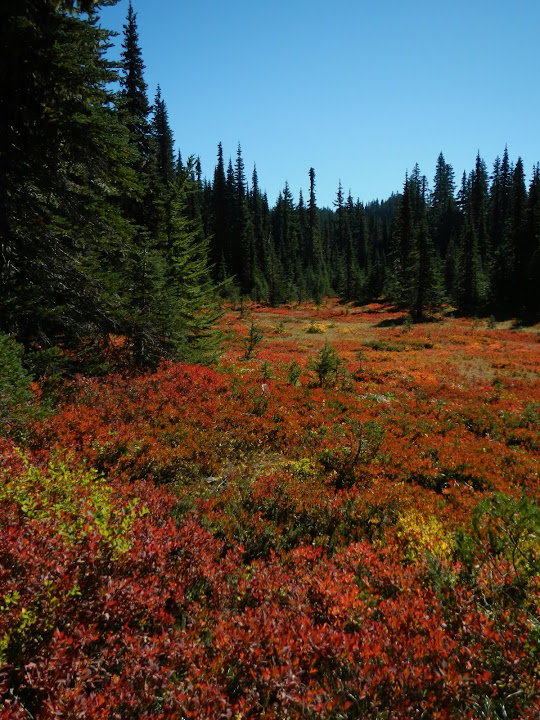 back past Placid Lake (which, in this low water year, is showing quite a bit of beach), 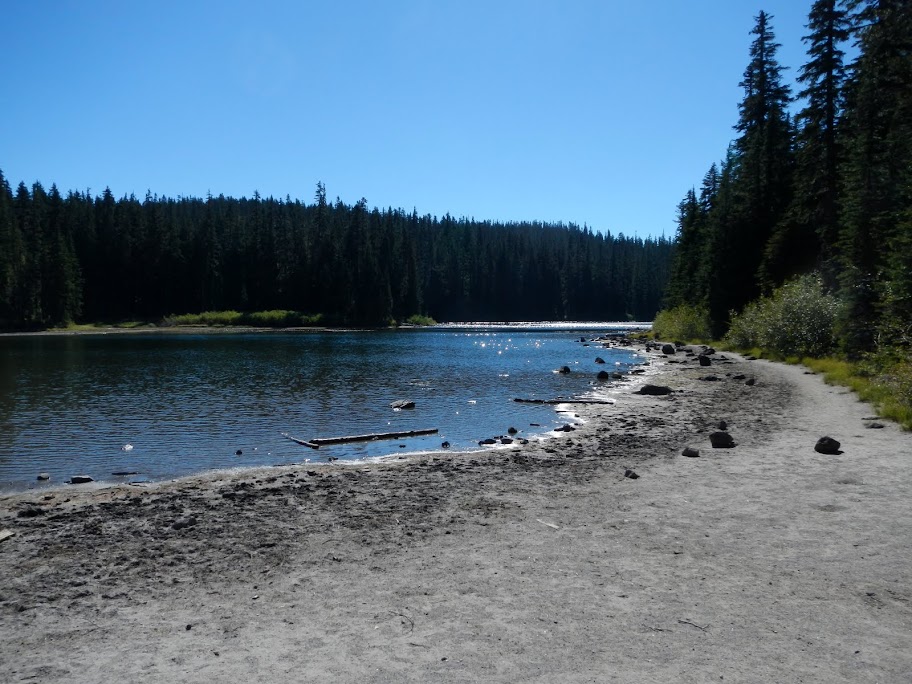 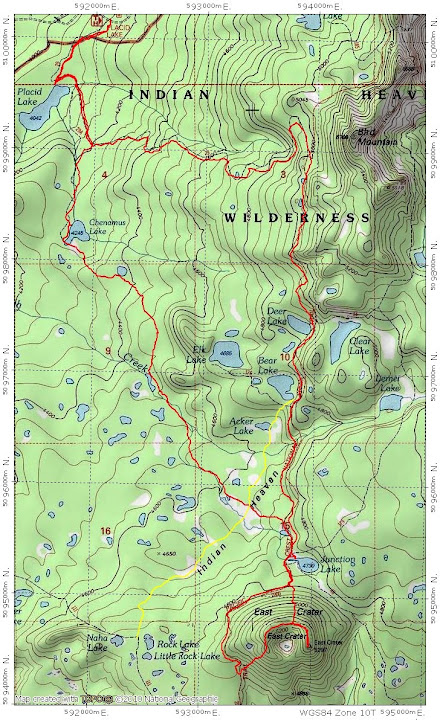 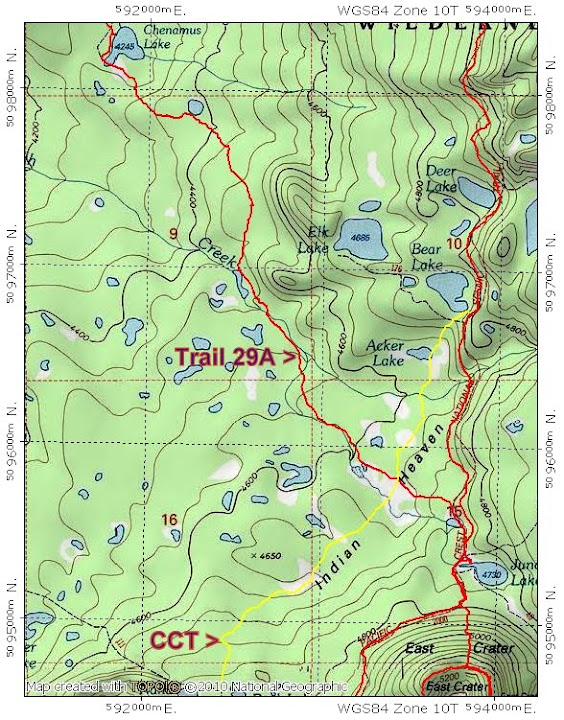 I did the Chenamus to Junction trail last October (trip report here)and was under the impression that it was the old CCT. I have seen posts here which said that the trail south from Chenamus Lake was the CCT, but I have no old maps.
Top

drm wrote:I did the Chenamus to Junction trail last October (trip report here)and was under the impression that it was the old CCT. I have seen posts here which said that the trail south from Chenamus Lake was the CCT, but I have no old maps.

My first contact with the CCT was when someone (I think it was Don Nelsen) posted that it used to run past Dog Mtn. That lead me to get a copy of Wills 1962 High Trails guide - which shows the CCT as it existed before the PCT. It shows the CCT passing between Elk and Bear Lakes (and the Placid Lake trail is called the Lone Butte trail). Just Peachy's post about on-line USGS maps lead me to the 1965 USGS Lone Butte quad, which clearly shows the CCT running from near Rock Lake to past Deer Lake. 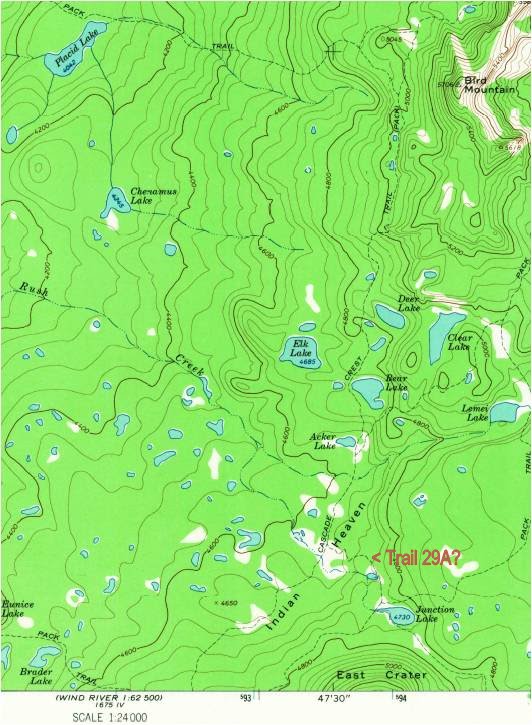 What's interesting is that in all these guides and maps, today's "extension" of Tr 29A was last shown in 1931 but is still easy to follow. I think, in the map above, that part of it might be that short trail that runs from the CCT in the meadow to Junction Lake, but it's not labeled as such. Looking at your photos, I realize that, due to the dry weather lately, I missed a lot of wet, boggy ground and some meaningful stream crossings.
Last edited by VanMarmot on October 12th, 2012, 2:26 pm, edited 1 time in total.
Top

I did this loop (minus the East Crater) a couple of years ago. The "water feature" is Rush Creek, which like so many Indian Heaven streams, runs dry in late summer/fall, but has large standing pools.

As far as I know, the trail is really just the continuation of the Chenamus Lake Trail, the part beyond Chenamus Lake no longer maintained. It is known to regular users of Indian Heaven, including horse groups. The CCT always roughly parallels the PCT and did not extend to Chenamus/Placid Lakes.
Top

Not sure why you found so much water in the Rush Creek crossing. I have done this route more than a dozen times and never found enough water to get my feet wet. The trail is a nice alternative to the Placid Lake Trail, but it does require a bit of route-finding (not a lot, but more than auto-pilot).

I also agree with the posting that the Cascade Crest Trail never passed by Chenamus Lake. The CCT connected the west side of Deer and Bear to Rock Lakes. The PCT followed the same route past Deer and Bear, but ascended to Junction Lake, and then traversed East Crater between its current route and Rock Lake, hitting the current Thomas Lake Trail between Umtux and Blue Lakes. This was evident by two old PCT metal trail markers (one is no longer on the tree) which I found back in the 1990s.
Top

On your East Crater route, I found it easier to stay to the north of the first tarn on your map than to be on the south. If you leave the PCT at its crest on the traverse, the route is fairly easy.
Top
Post Reply
6 posts • Page 1 of 1