After staring at the map for awhile, I pieced together a new (for me) big loop in Indian Heaven - my favorite hiking spot, particularly in the Fall. After parking at the PCT TH at the N end of the wilderness, I went in search of Trail 26. The map shows it starting behind the Middle Campground, but a horse packer told me it actually started at the Surprise Lakes Campground and was now more of a road than a trail. I found the Tr 26 TH sign (this one is from further along the trail), 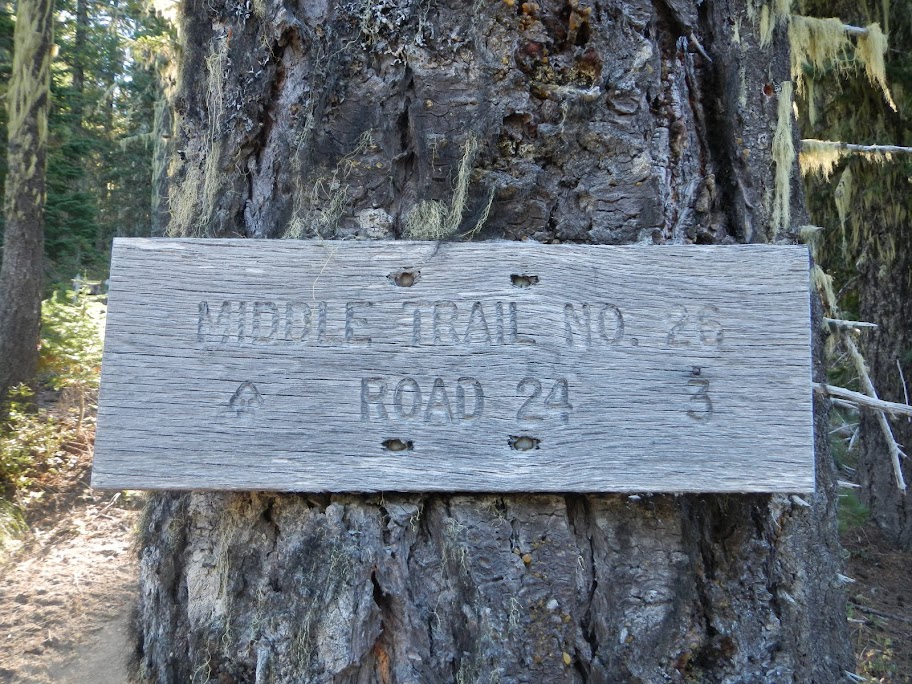 and headed S on it past the Surprise Lakes, 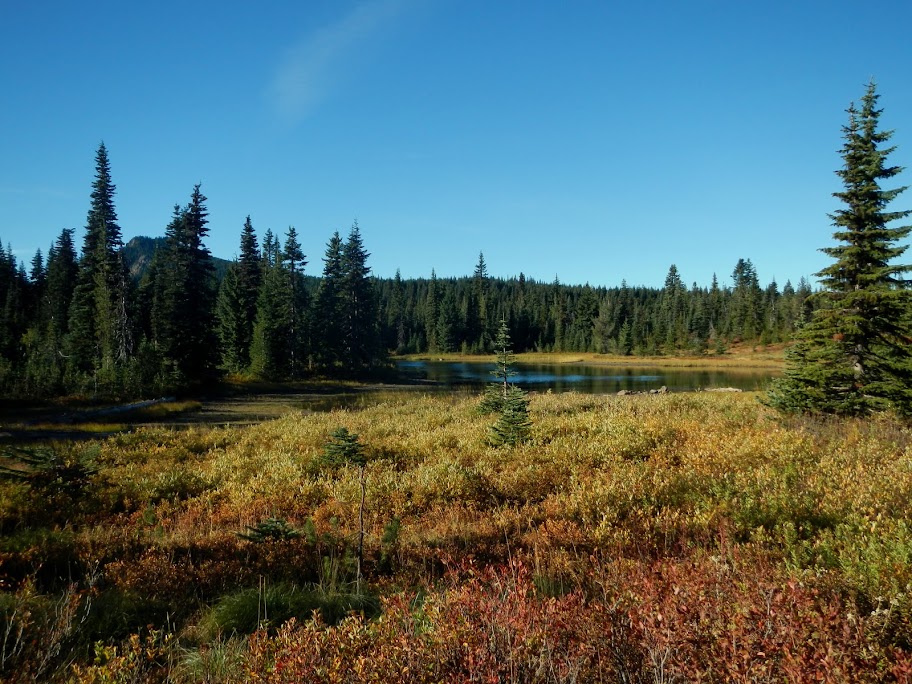 on what would be a dusty ATV trail for the next 7 mi. 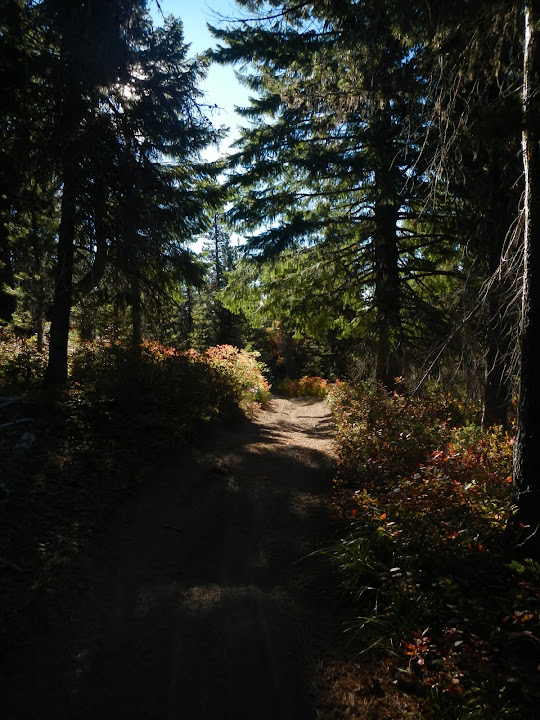 Looking at my GPS track later, I could see it bore little relation to the mapped location of Tr 26. Maybe there is another Tr 26 - a real hiking trail - hidden back in the woods but I never saw it, even when I supposedly crossed it per the GPS. Trail 26 does cross several named creeks, like Cultus Ck, 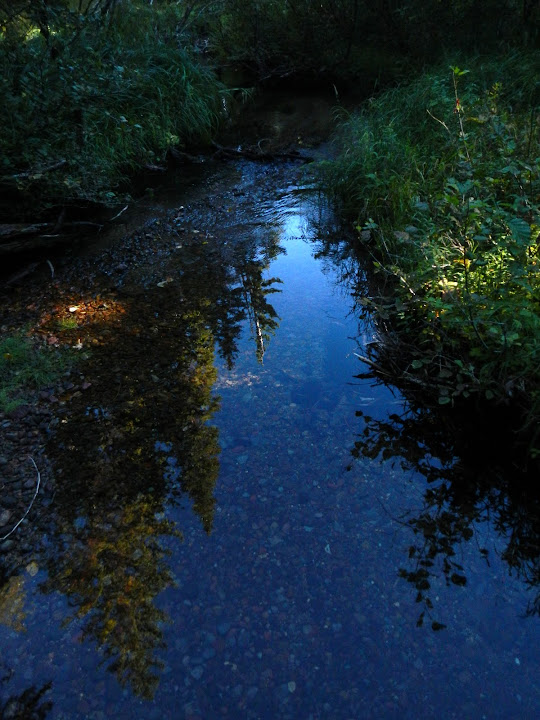 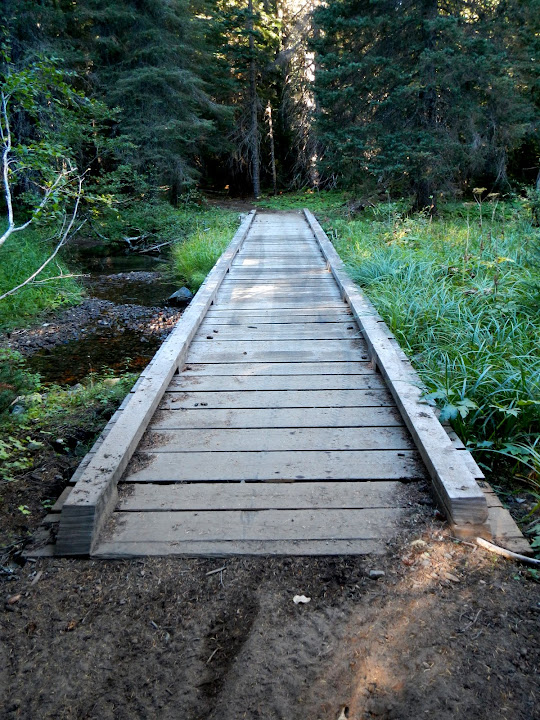 Trail 26 just ends at Rd 24, a truly large gravel haul road through the forest. From the Tr 26/Rd 24 junction, I went NW to the Little Goose Forest Camp, 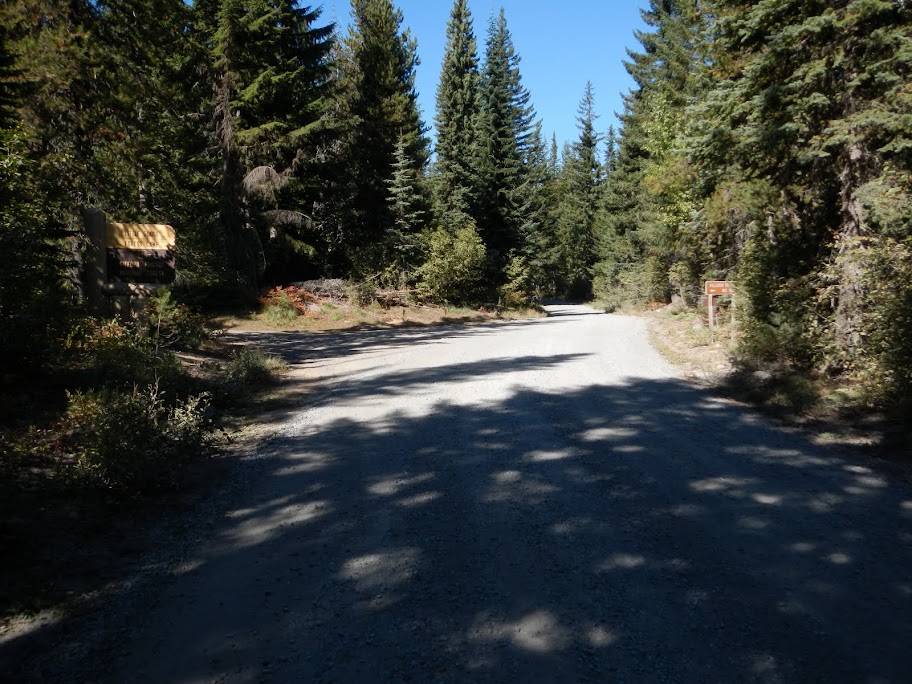 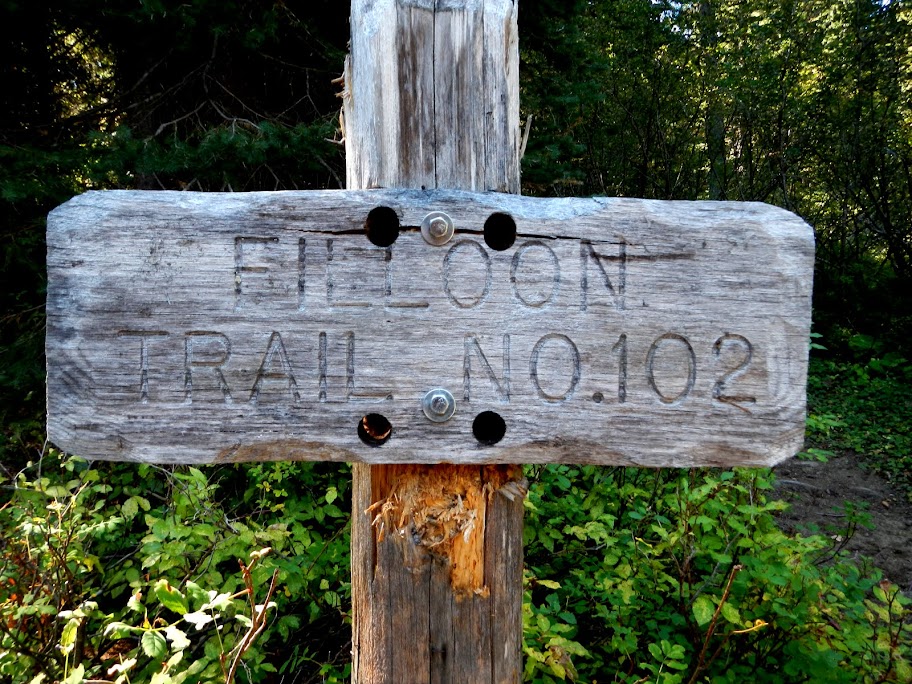 Up to this point, I hadn't smelled much smoke from the Cascade Creek fire, but that changed quickly from here on. It was never visibly smokey in the forest, but you could certainly smell it. The Filloon Trail connects with Tr 34, which heads uphill, gradually but steadily, toward Lemei Rock. Along the way, there were some intense burst of Fall colors. 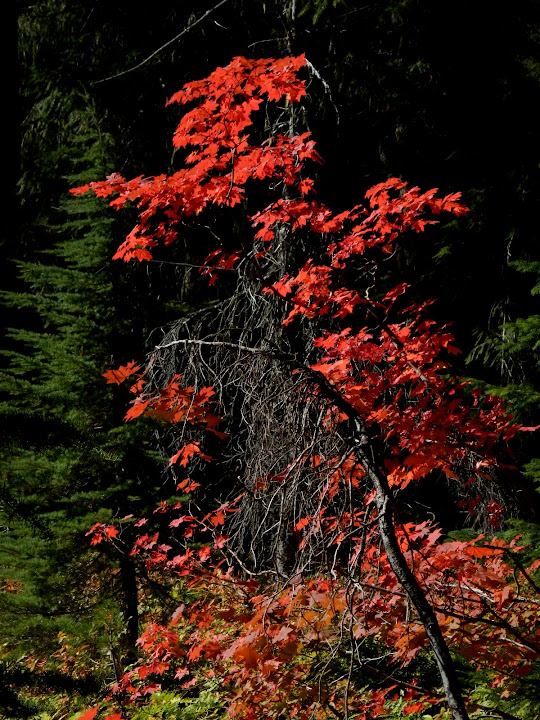 Tr 34 crests a ridge above Lake Wapiki, which would have been a great view had it not been for the smoke, which was now pretty thick off toward Adams. 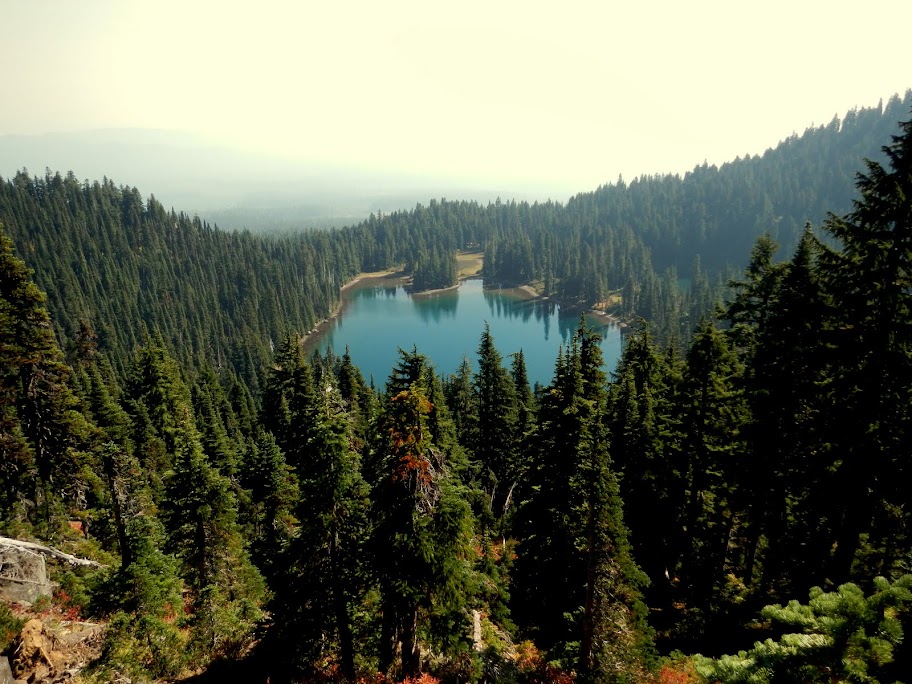 I had thought about summiting Lemei, but there seemed little point since there wasn't much of a view. So after a quick lunch at its base, I headed down Tr 34, through a delightful little meadow, 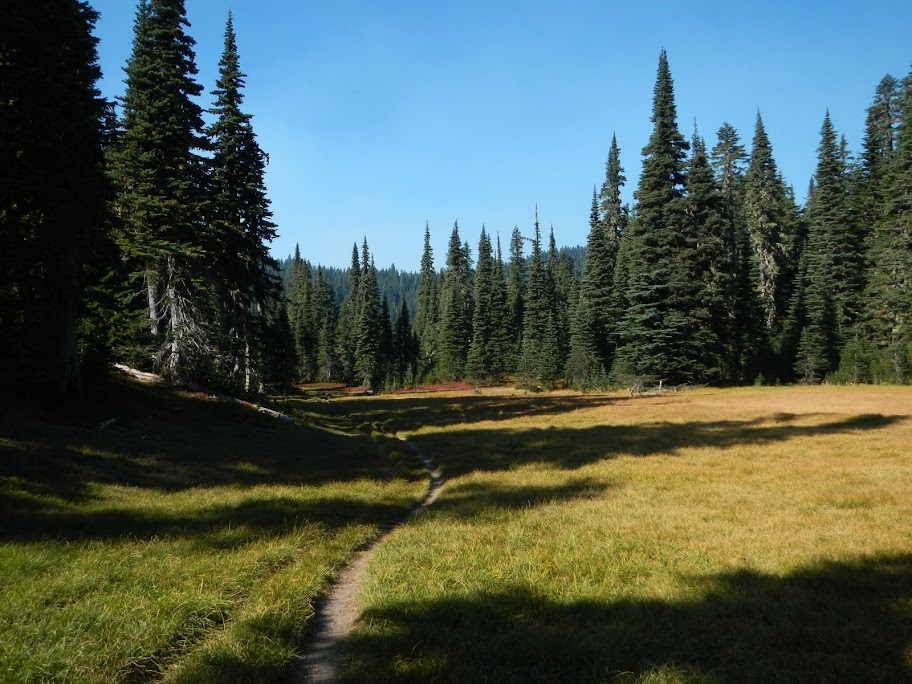 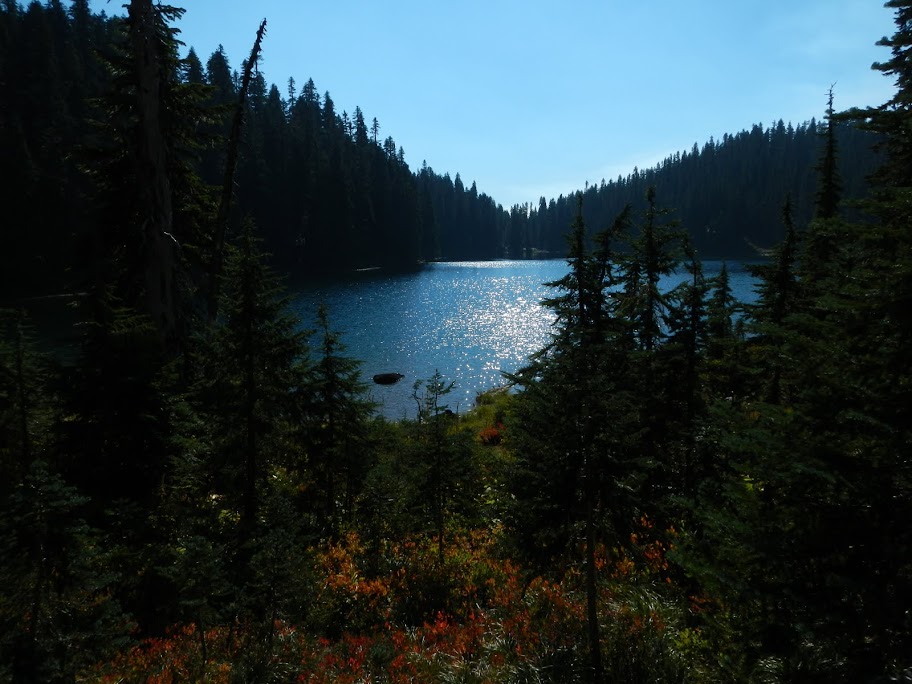 to the PCT and then headed N. I decided to salvage some views by taking Tr 107 along the flanks of Sawtooth Mtn. This allowed me a well-smoked view W to St. Helens, 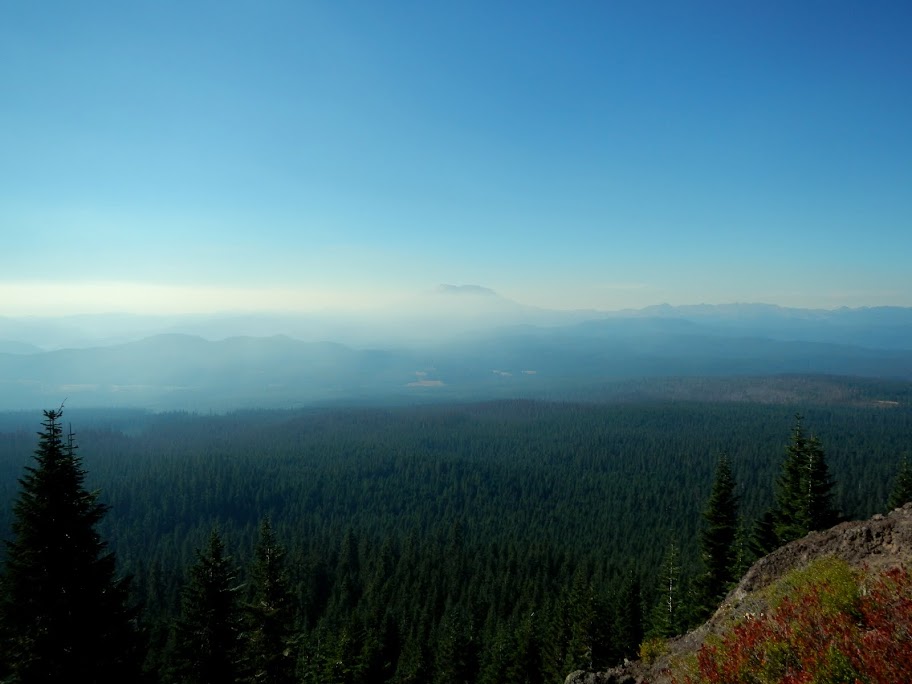 and S toward Lemei Rock and Bird Mtn. 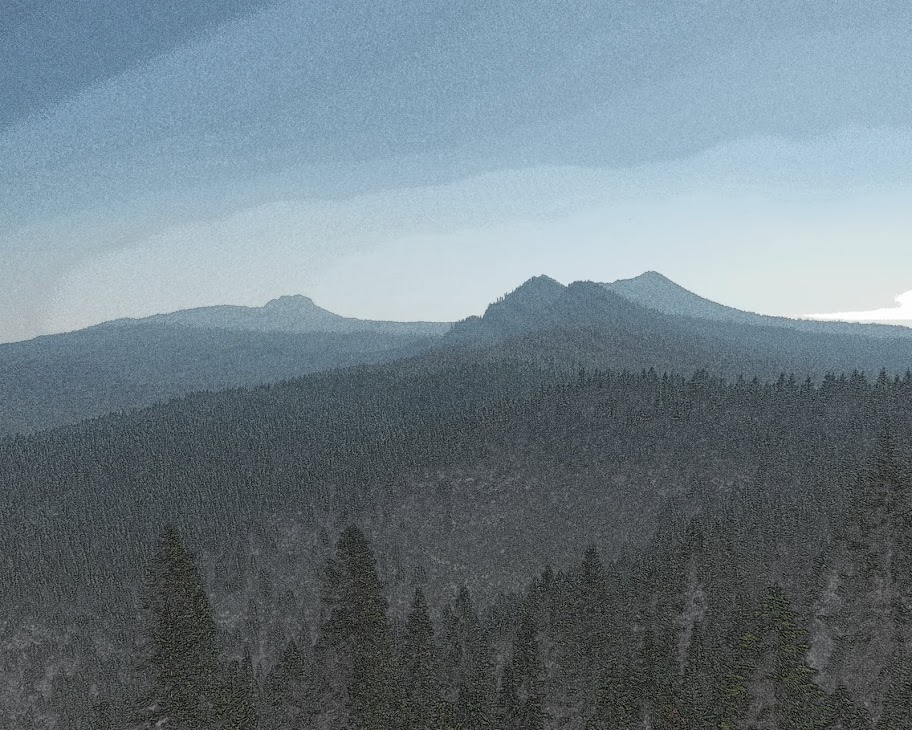 However, it was the view toward Adams that was the truly shocking. The mountain looked like it was kicking up dust as it plowed through the forest, but that was a fire doing the plowing. 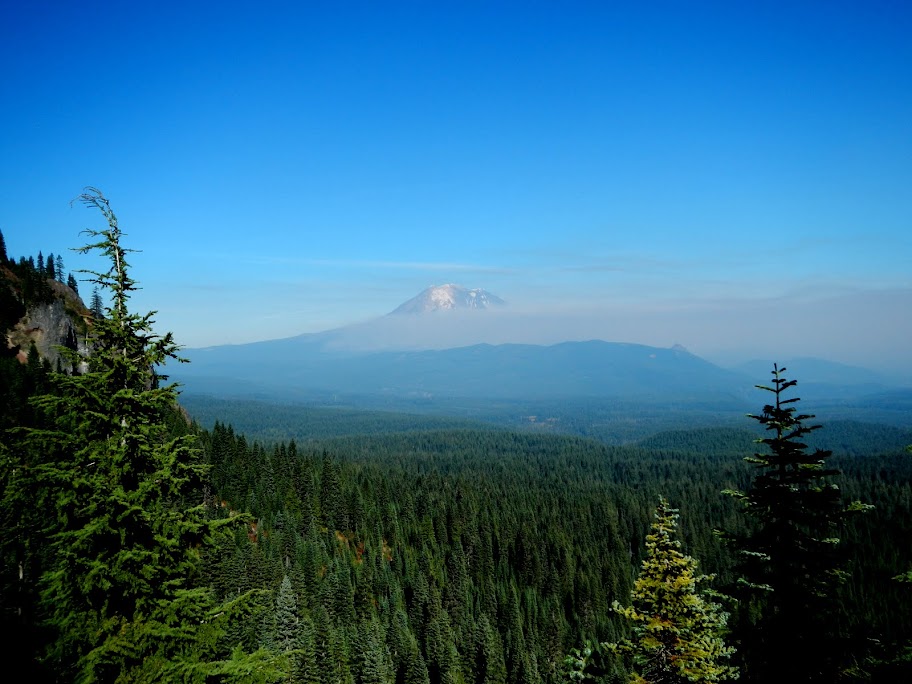 As I got closer, the fire line became clear. Not a pretty sight at all, considering what's being destroyed. 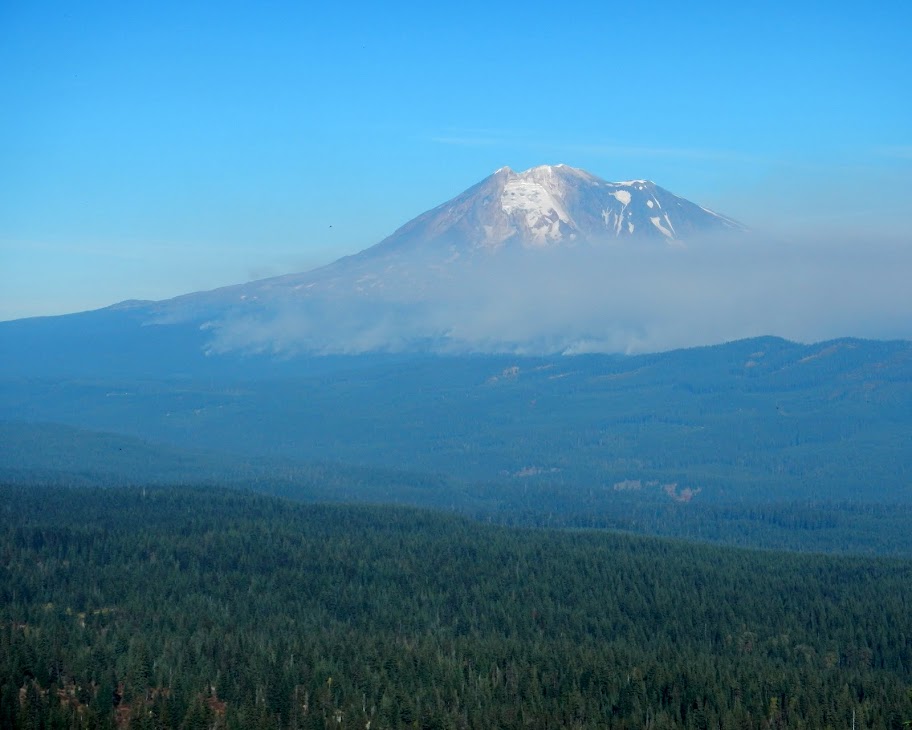 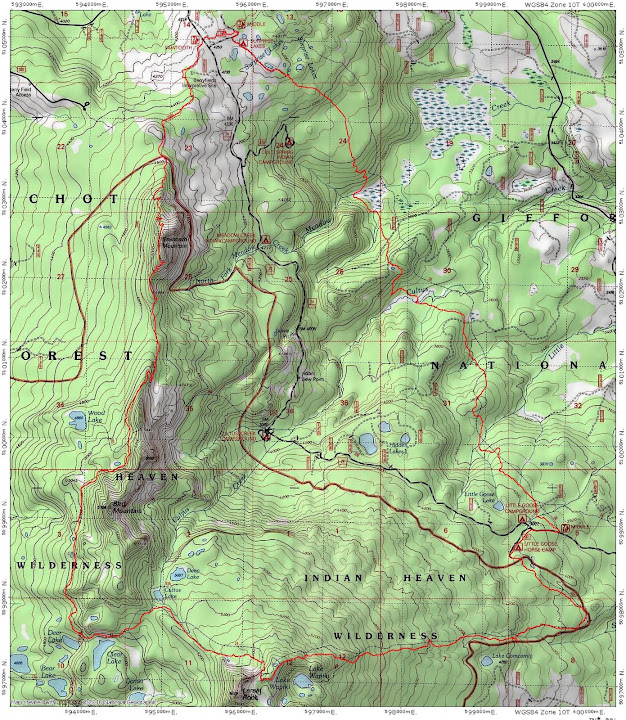 Nice TR. The picture of the fire line on Adams is depressing. We'll see how the Round-the-Mountain trail looks after this.

Did you see a lot of hunters? Was the smoke fairly thick throughout the trip?
Top

cunningkeith wrote:Nice TR. The picture of the fire line on Adams is depressing. We'll see how the Round-the-Mountain trail looks after this.

Did you see a lot of hunters? Was the smoke fairly thick throughout the trip?

Didn't see any hunters but I may have heard one practicing an elk call(?). I didn't notice the smoke smell until late morning, then it was fairly strong. Smoke wasn't obviously visible down in the forest, but once I got up around Lemei I could see that it was thick to the E and SE of Adams - and only a little less so over by St. Helens. It might be time for a day or two of rain...
Top

Thanks for the trip report! I am on staycation next week and might hit up IWH for another 2 day trip. I did Trapper Creek overnight last Friday, I had the whole wilderness to myself, I think.
Top
Post Reply
4 posts • Page 1 of 1