Sunshine, mountain lakes, soon to be fall colors, a deserted trail system, hawks and even a cougar sighting (sorry, he was too fast for pics and we were in the car.. damn...).. Off we go..
The Boulder Lake Trail is accessed via FS48 out of White River East. It's about 20 miles from there with the last 4 unpaved and a little potholey and washboardy but easily driveable in my Civic. You can also get to Bonney Meadow via FS4891 by car but think of the road past Horseshoe Lake and you get the general idea. When they post one of those big yellow 'primitive road' signs, it generally means it. If you're gonna be that crazy you might as well just use Bennett Pass thru the Terrible Traverse. That's actually the shortest route. Kindly include me in your insurance though, at least from stories I've heard. A ranger once said a goat wouldn't use Bennett Pass.
The altitudes listed are from the fs site and kind of vary from page to page within their site but assume them to be relatively close at least.. I guess.. It's definitely all uphill going in and downhill coming out.
The early colors at Boulder Lake.. 4,560 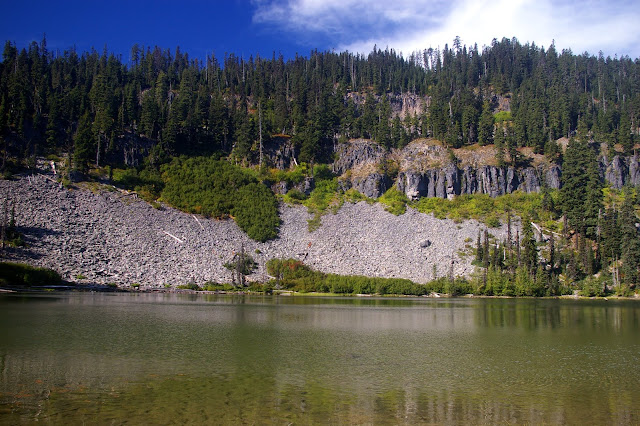 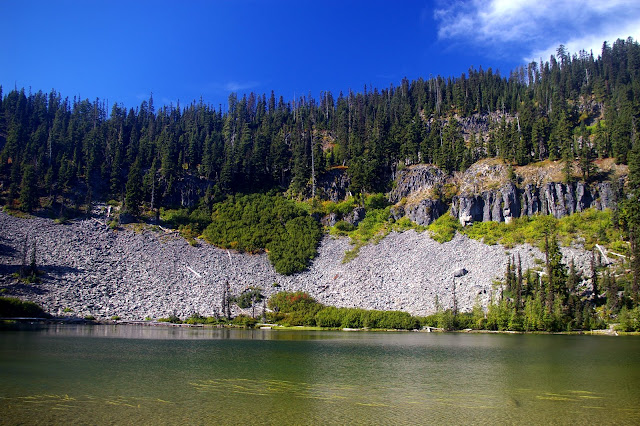 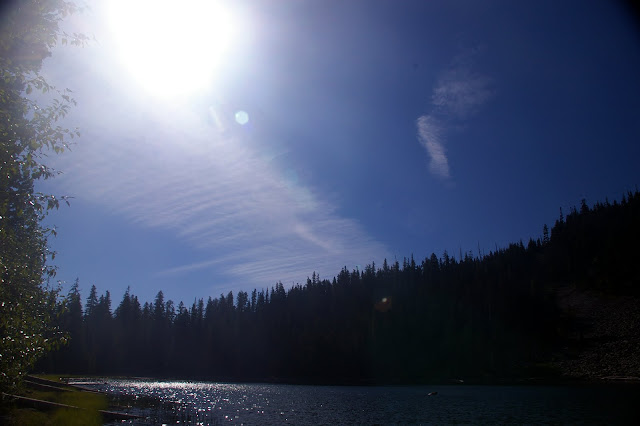 If you want to take pictures of Boulder Lake without having to avoid shadows you need to take them early in the day.. In the afternoon the rockwall gets covered by the shadows.
Leaving Boulder Lake it's about two miles on up to Bonney Meadow Campground and meadow. About 4,800'. This is a really nice little campground. 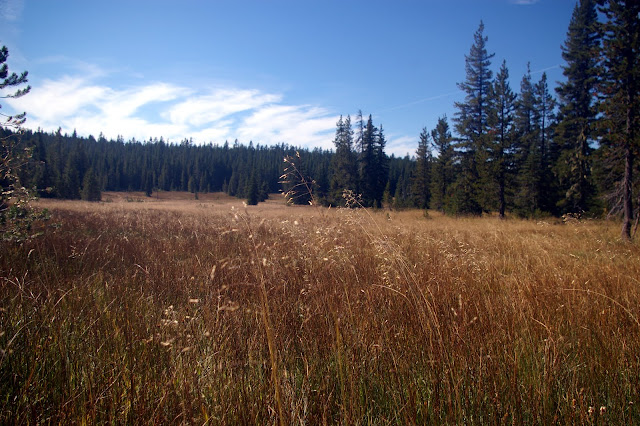 After a quick break we headed on up the gated road to Bonney Butte. Mt Jefferson almost had a surreal look of floating on the layer of smoke/haze in the air. 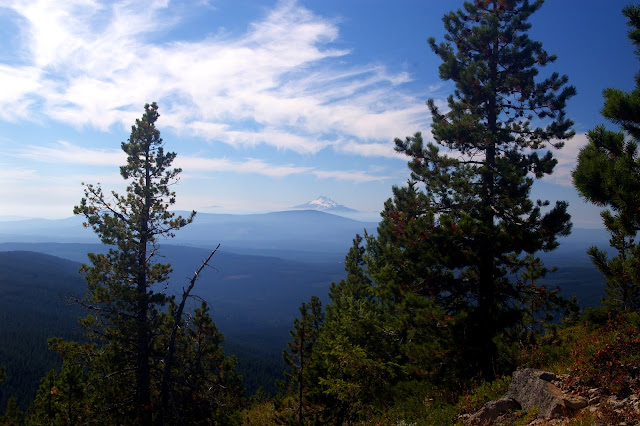 You can barely make out Mt Adams in the middle. This view would change very quickly.. 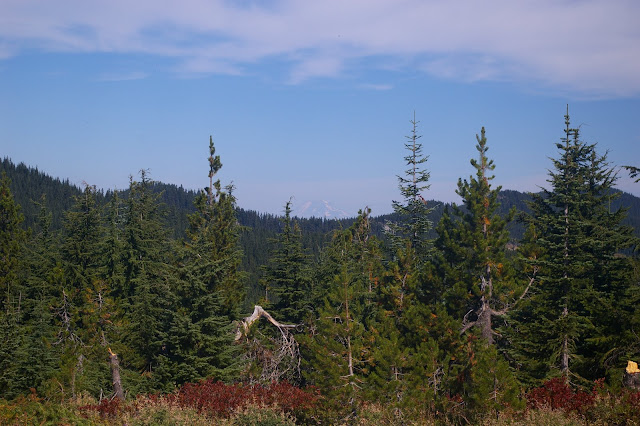 And now over to a much closer Mt Hood... 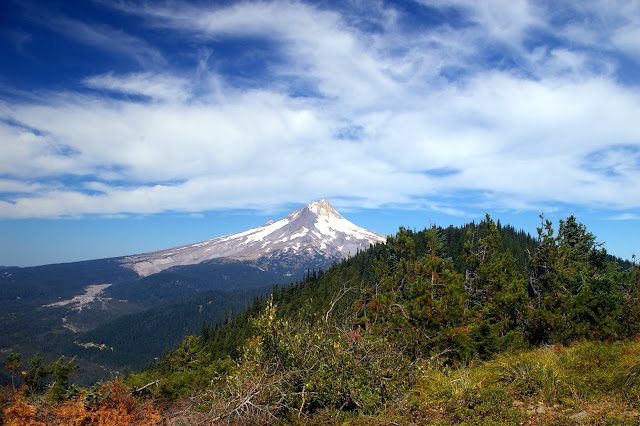 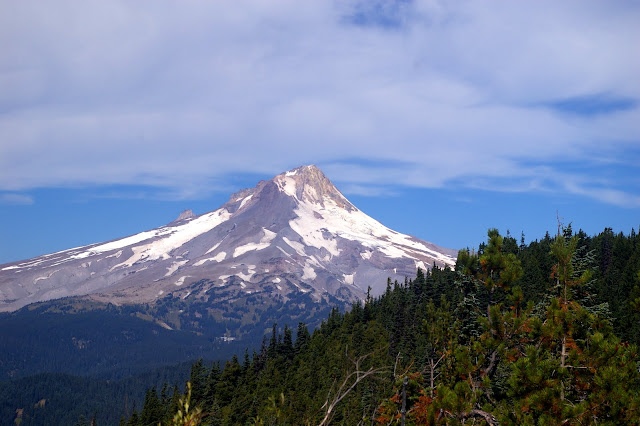 Of course the main reason you go up to Bonney Butte is to check out the Hawkwatch (http://www.hawkwatch.org) counting and banding area..
Here's their menu.. 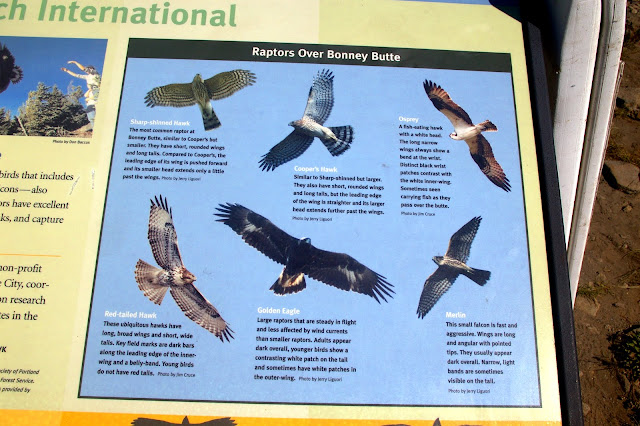 (you don't really get to choose 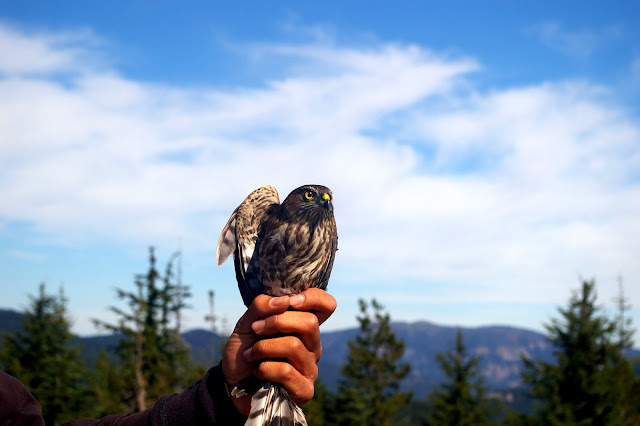 Mary Ann had the honors this time around... 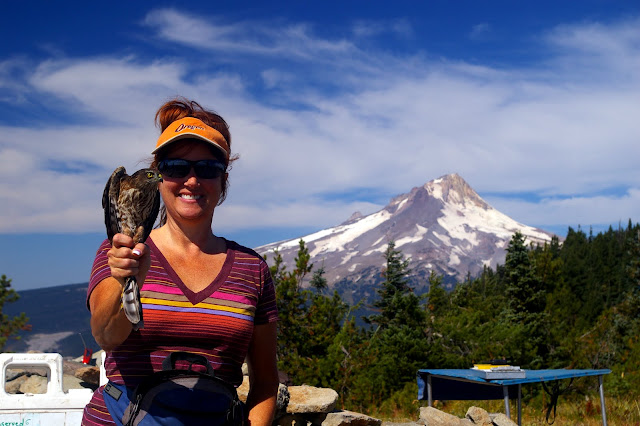 For anyone that missed it last October, here's mine from last time.. 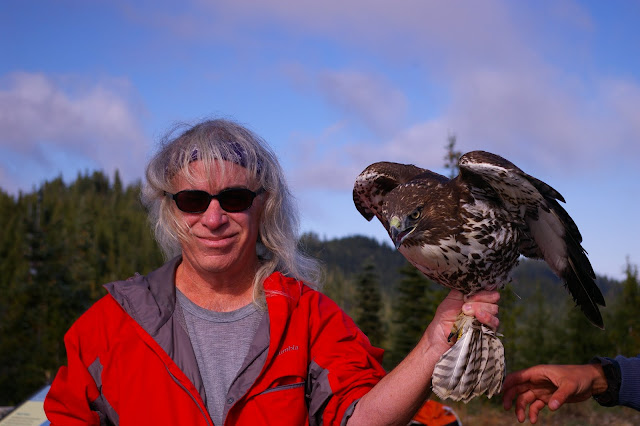 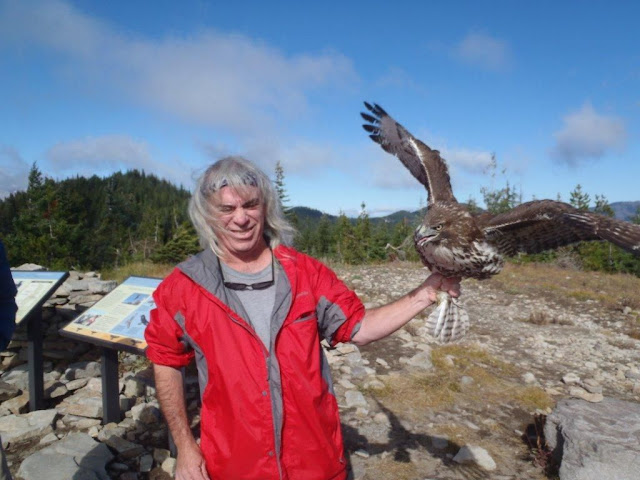 Back to today..The remains of the Bonney Butte fire lookout... 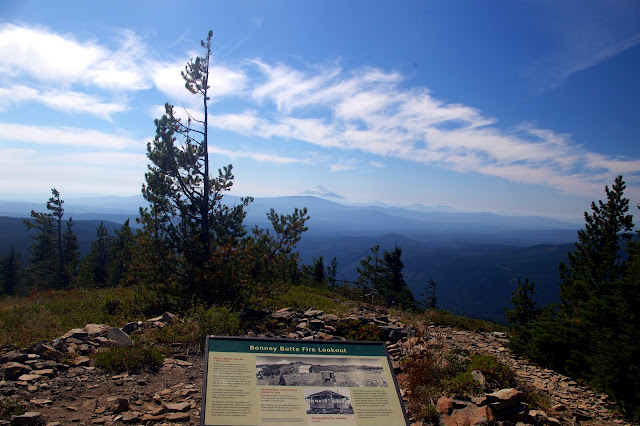 Here's that same look towards Mt Adams about half an hour ater the first one. The mountain is completely enveloped in huge clouds of smoke.. 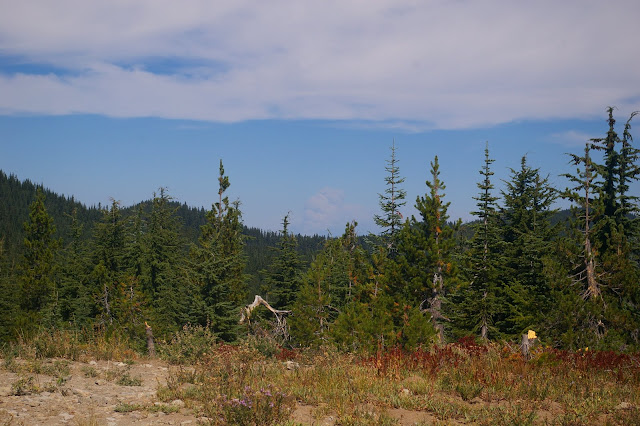 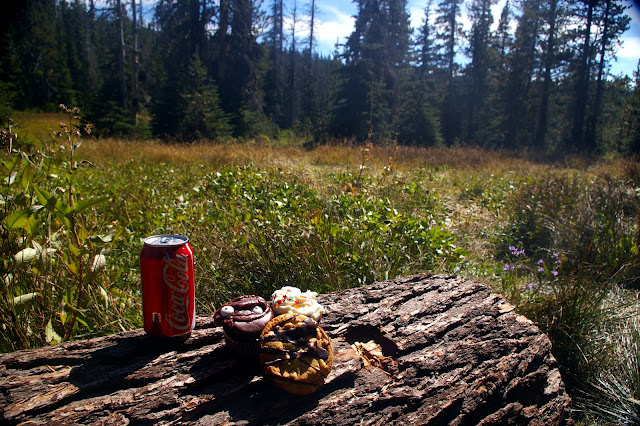 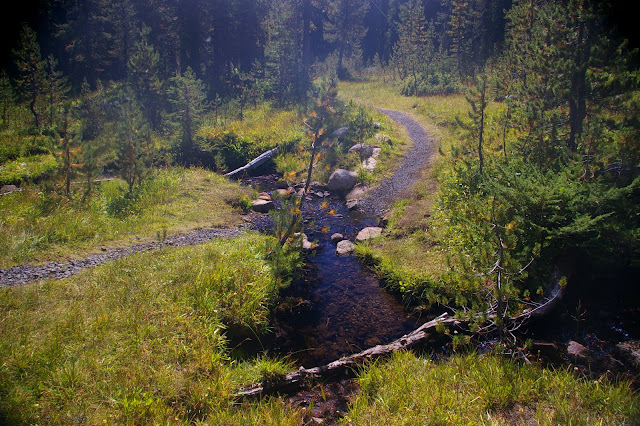 The very beginning of what will be some really nice fall colors in a couple weeks.. 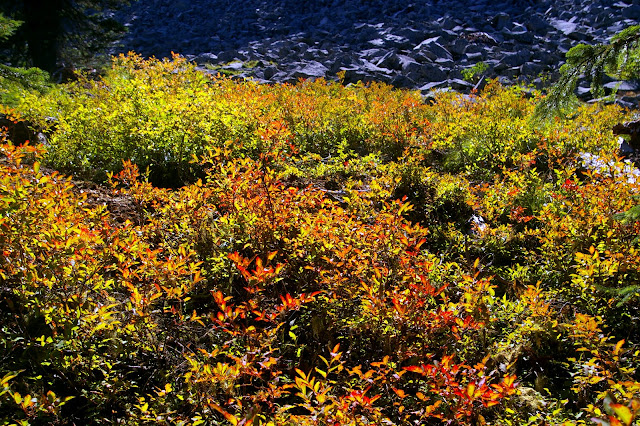 And some of the afternoon watercolors of Boulder Lake... 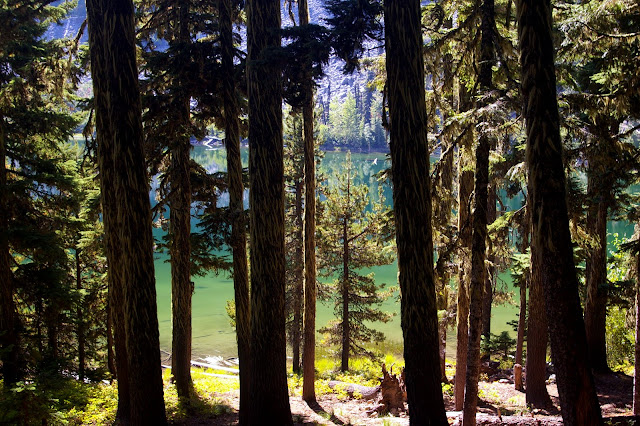 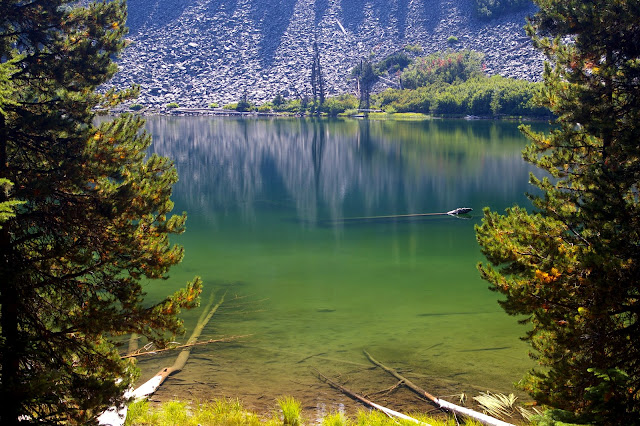 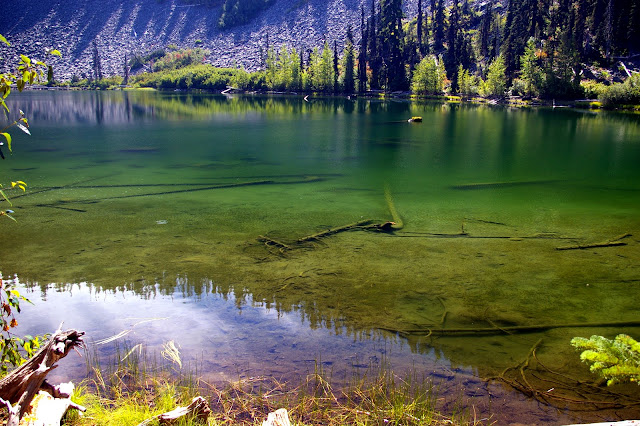 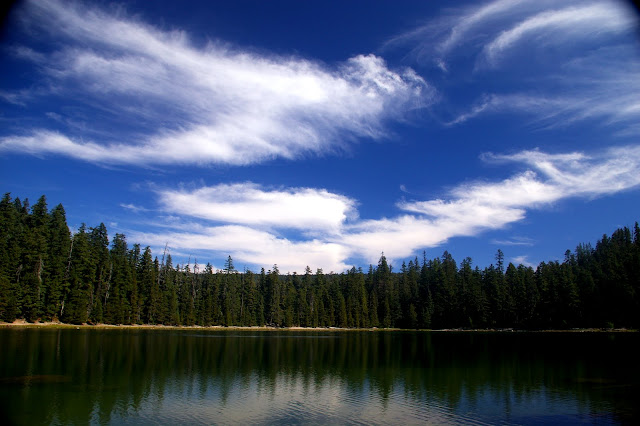 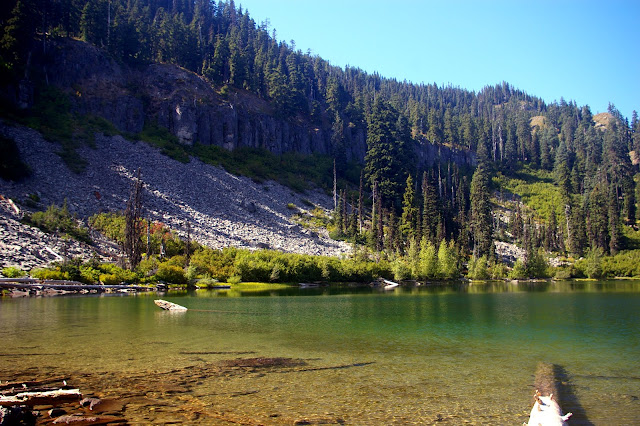 Little tiny Spinning Lake on the way back down.. 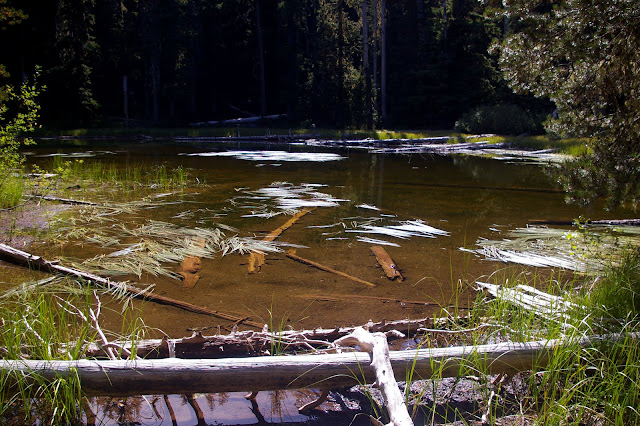 Obligatory trailhead info.. a few steps later the old signs are still up. Naturally the distannce to the same places differ by more than the 10 yards you've covered. I think they're referred to as 'forest service miles' 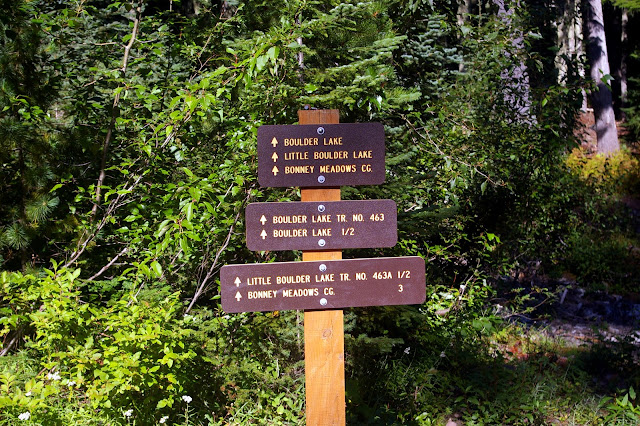 Driving back on fs4890 just after the Bonney Meadows turnoff we both saw a big brown animal on the road that turned and looked back and the disappeared into the trees before we could even reach for a camera. There could be no doubt as to that it was a cougar. I've seen enough of them at the zoo. It was pretty cool to see a live one though kind of a bummer he didn't respond to my 'here kitty kitty' to come back out and pose for a picture.
This is about a two hour drive from here in Tigard. So probably closer for the vast majority of you. If you want a place for peace, quiet and solitude in addition to the things in the opening sentence, this is your spot. It might be busier on weekends, I have no clue about that part. The paved roads off fs48 are pretty narrow, you really don't want to meet a lot of traffic on it. We saw none.
Top

Cool hike! Where's the TH that you used? Looking at the map I see a network of trails of that meet up the various roads at various places.
Top

Take 48 out of the back of the White River East lot for about 6.9 miles. Turn left on unsigned 4890. In about 3.7 miles you reach the junction for 4891, the 'primitive road' going left to Bonney Meadows campground. Don't turn. Continue straight about 2.5 more paved but narrow miles to 4880 where there's a sign kind of leaning over. Turn left there. It's about 4 miles to the turnout at the pretty well signed trailhead on the left.
Top

Another great tr and set of pictures, Gene. I love the shots with the birds of prey but nothing tops that lunch shot! Yummmeeey
Top

Thanx! I like to think of it as calorie replenishment. Kinda sounds better that way...
Top

justpeachy wrote:Cool hike! Where's the TH that you used? Looking at the map I see a network of trails of that meet up the various roads at various places.

Boulder Lake is great, really great. Follow Gene's directions and you'll find it easy. The roads are pretty narrow though, so watch out.
Author of Off the Beaten Trail, 101 Hikes in the Majestic Mount Jefferson Region and PDX Hiking 365. Website: www.offthebeatentrailpdx.com
Top

Nice! We camped at Bonney Meadows and checked out the hawks on Bonney Butte. We only got to see smaller Sharp-Shinned ones up close but they were pretty.

We drove in from 35 on 3550. You certainly can make it in a Subaru Outback if you are patient. I wouldn't recommend it unless you look at such things as an enjoyable challenge. 4890 is undeniably better, though still a long slog on bumpy dirt roads.

Thought we saw cougar poop in the meadow …

Here's the beautiful lady our daughter got to hold and release on the second day.

The guys were super nice to our daughter and were happy to have visitors and to bring the hawks from the blind for us to see.

I think it is an great destination for patient bird lovers.
Top
Post Reply
8 posts • Page 1 of 1