Jim, Mary Ann and I took off for Vista Ridge this morning and after the seemingly eternally long drive (why can't they just fix FS18 and let us use Lolo Pass Rd all the way thru on a safer road and one that's 4 miles shorter? Grrrr...) and finally arrived at the trailhead about 10ish. The burn area has been pretty well covered so I'll go heavy on the more colorful stuff starting at the Vista Ridge Trail / Eden Park Trail junction about 11ish (when the sun is just horrible for looking at Hood).. 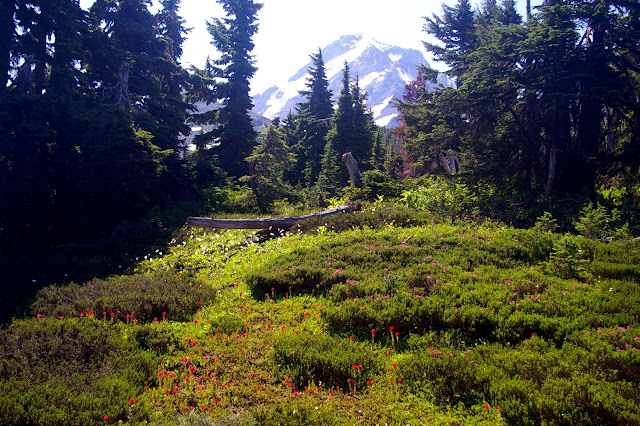 There was a pretty clear view of Mt Adams, Mt Rainier and Mt St Helens (not pictured) all day but the white sky off in the distance really made it not worth spending time on for pictures. It looked exponentially better to the naked eye.. 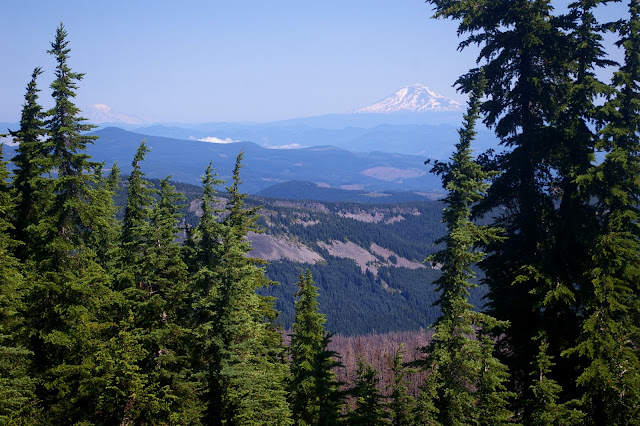 Mary Ann, Jim and a sort of lost hiker from Minnesota (Chris) crossing Ladd Creek. Poor Chris had missed the burned sign at Cairn Basin heading him back towards Bald Mountain. Luckily we'd all been up there many times so were able to take him back there and send him on his way after a lunch stop. But I'm getting ahead of myself.. 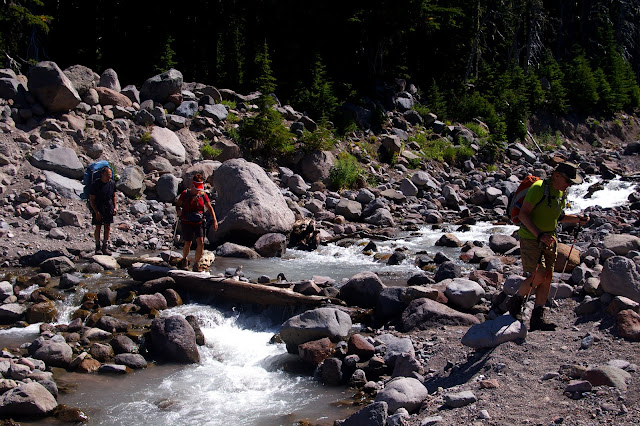 Arriving at the Eden Park meadow which looks far better than the last couple years. This was to be continuous throughout the day. After a couple really bad years up there it's a great show this year and just starting to peak. 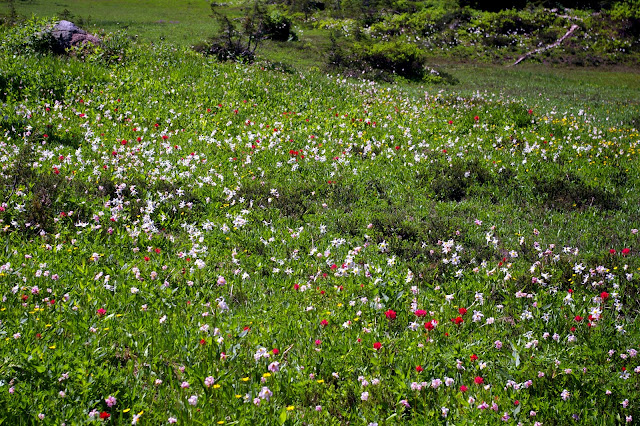 For those who have never seen the famous Mt Hood reflection down in Eden Park. Seriously, if you were one foot off in the wrong direction, it was not visible. But I seem to be pretty good at finding these things.. 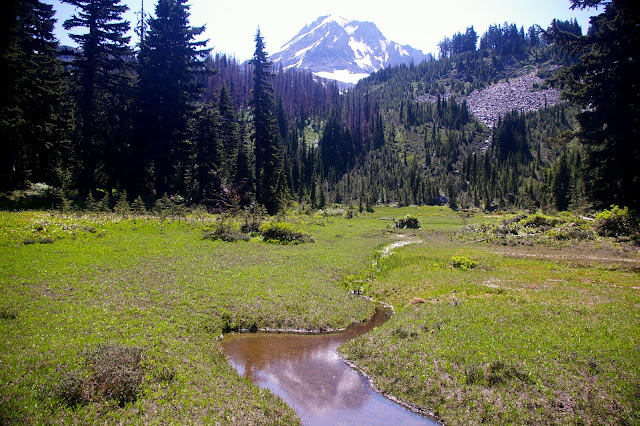 Oh looky, a bigger one over here.. 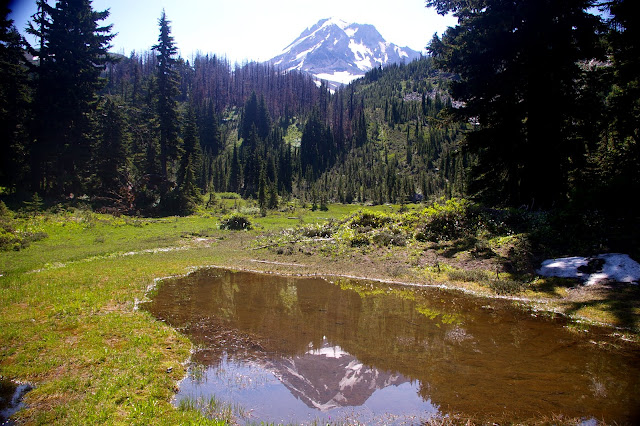 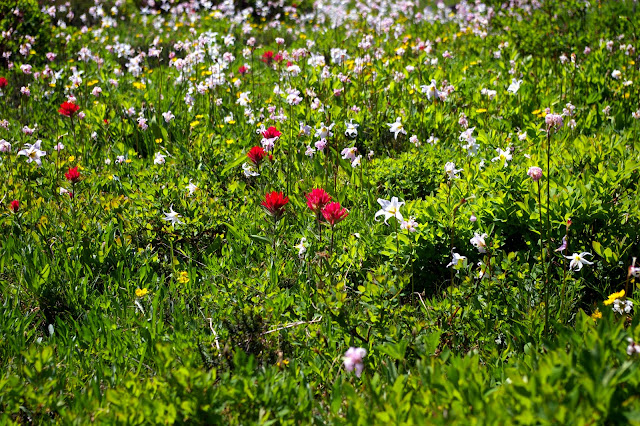 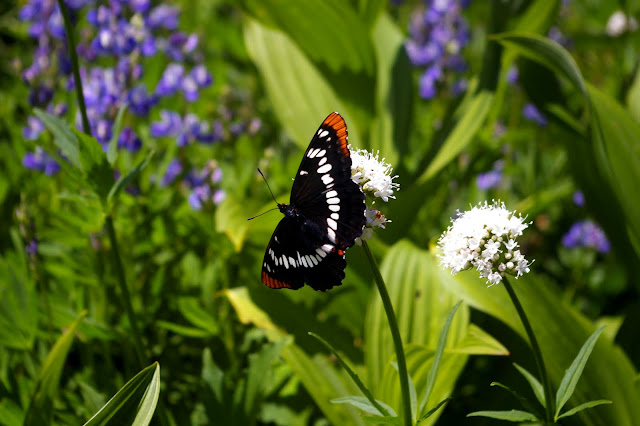 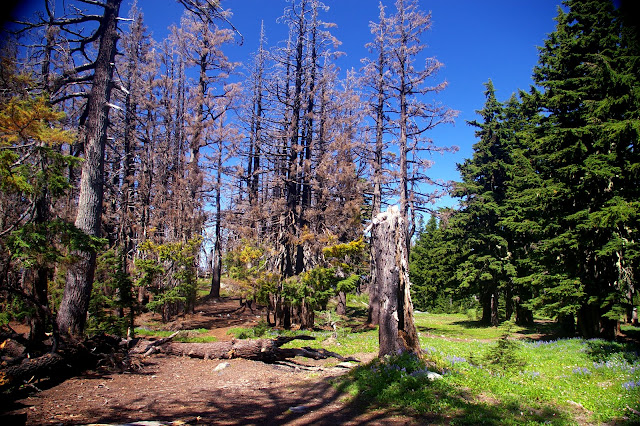 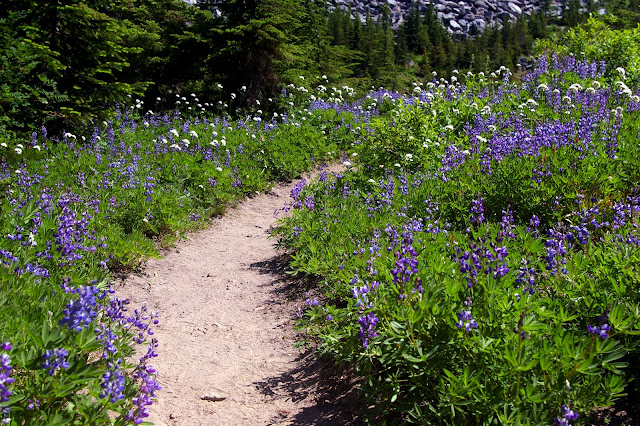 The flowers lining the trail between Eden Park and Cairn Basin were spectacular but for some reason Picasa isn't letting me link to a bunch of the pictures I originally wanted to use and I'm way too tired to figure out why..

Another meadow on the way from Cairn Basin towards Wy'East Basin.. 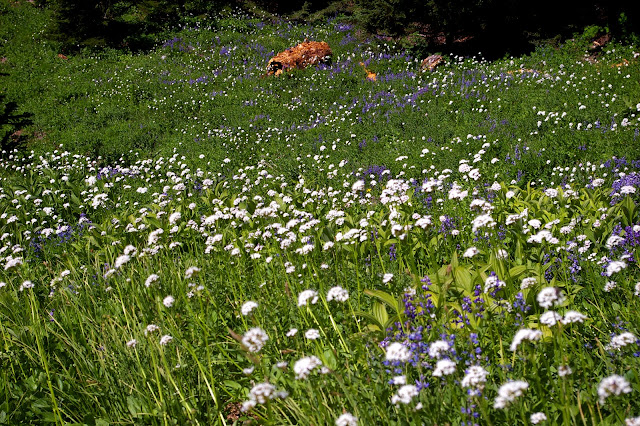 The meadow just after the Timberline Trail junction at Wy'East Basin as you head towards Elk Cove.. 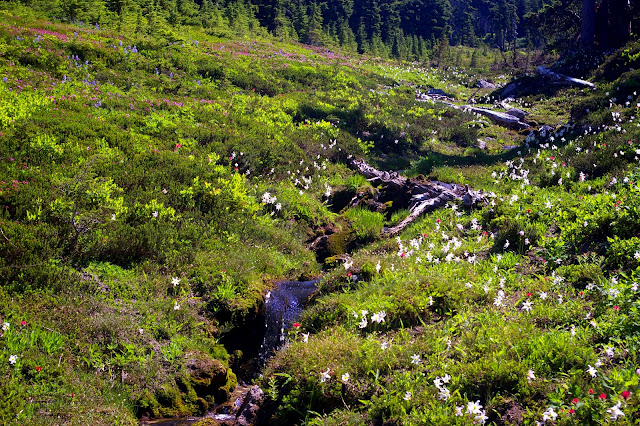 Heading down into Elk Cove.. 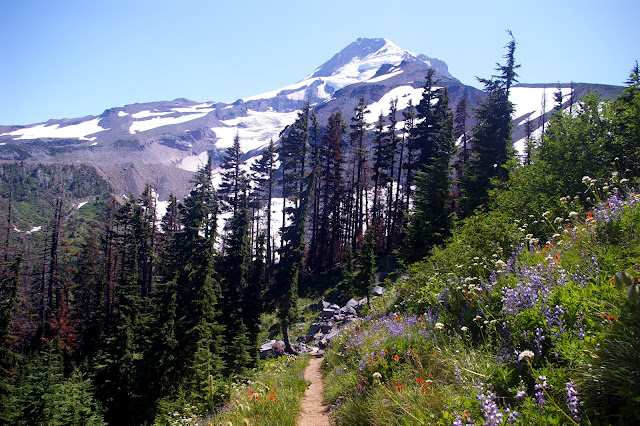 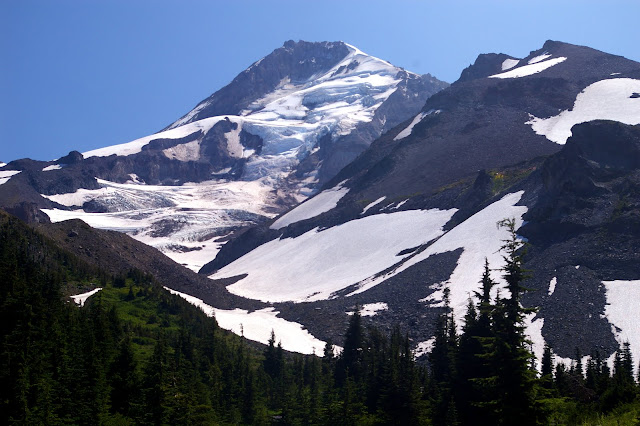 Reclaiming the forest, one beargrass at a time.. 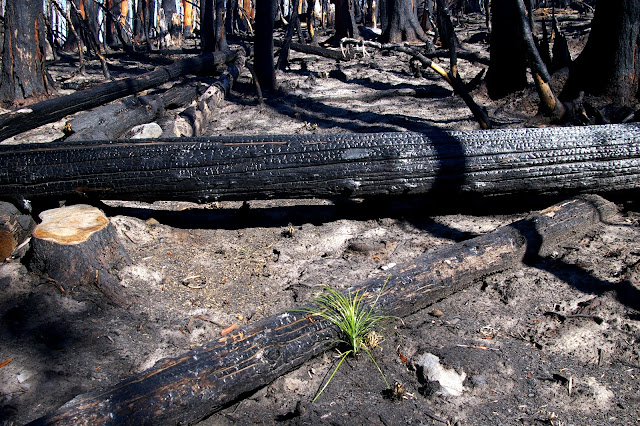 Lots more pictures from just a great day here..
http://picasaweb.google.com/pdxgene/VistaRidge17
Hardly anyone up there or even on the Timberline Trail today. I have a funny feeling that might not be the same this weekend.
And virtually no bugs other than the friendly bee and butterfly types..
Top

Great TR! My wife and I were just up there camping at Cairn Basin Tues-Thur. It was our first time in that area, and we definitely weren't disappointed. Someone, however, warned us that the trail from Cairn to Eden was heavily damaged and/ or easy to lose so we didnt attempt going down. I guess we should've seen for ourselves since it seems you had no trouble?
"The top...is not the top" - Mile...Mile & a Half

Trail burned over just 1st 0.1 mile from Cairn Basin towards Eden Park, and that is easy to do.
Top

miah66 wrote:Great TR! My wife and I were just up there camping at Cairn Basin Tues-Thur. It was our first time in that area, and we definitely weren't disappointed. Someone, however, warned us that the trail from Cairn to Eden was heavily damaged and/ or easy to lose so we didnt attempt going down. I guess we should've seen for ourselves since it seems you had no trouble?

Thanx!
It was burned pretty bad thru there, mainly along the hillside but not by the little creekside meadow areas, but the trail was pretty well worn and easy to follow even if you didn't know beforehand where it was going. Just a few dead trees to step over/around until trail cleanup is done. The worst of the burn area seemd to be the trail heading up Vista Ridge itself.
Top

Thanks for the TR and photos! Looks like those meadows are looking gorgeous!
Hannah

Picasa is playing nice again this morning so here's a couple of the pictures I really wanted to put up last night..
Back in Eden Park again... 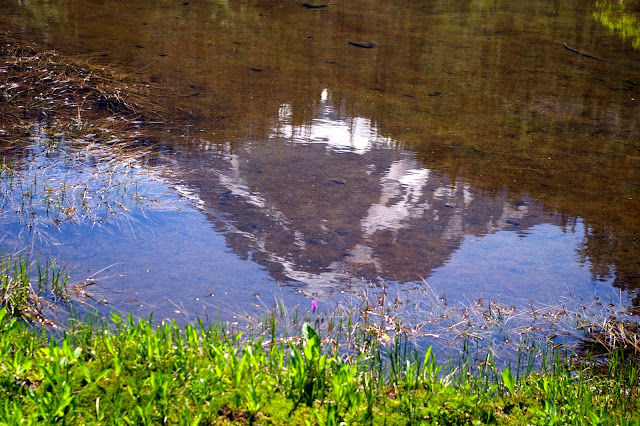 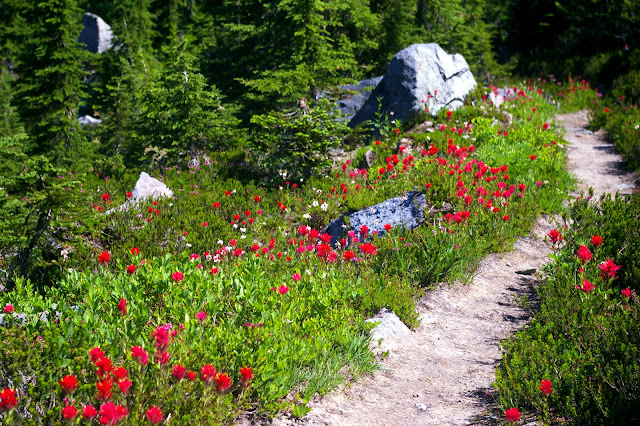 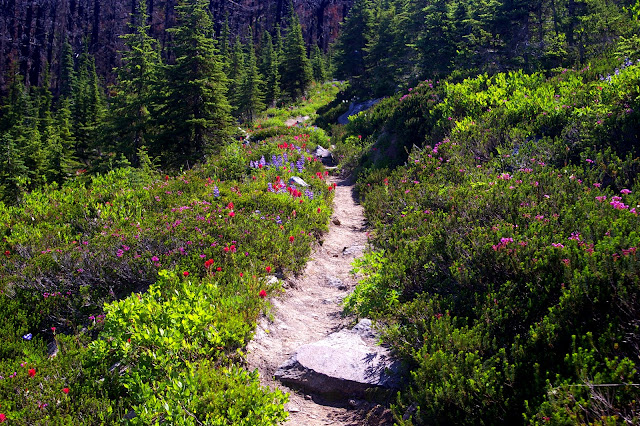 Heading back down the Vista Ridge Trail thru the burn area... 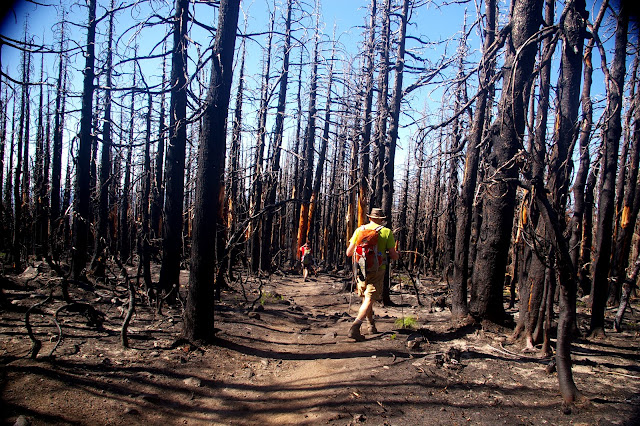 The deep colors of the burned trees where the outer layer has peeled away.. 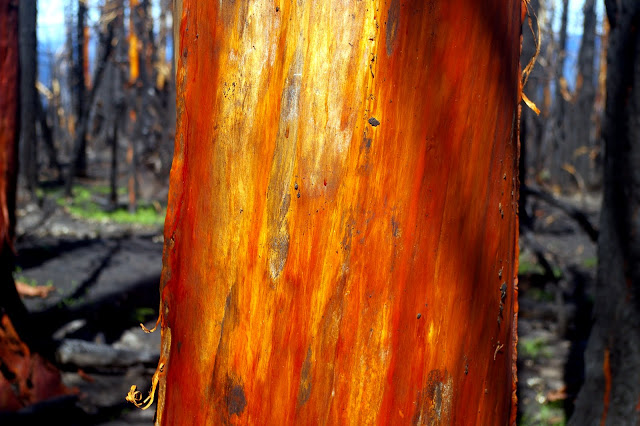 Any time the next couple weeks should be good to head on up. Some of the upper meadow areas in Eden Park and especially Cairn Basin were just getting started.
Top

The flower show was amazing up there. Thanks for posting the pictures because I forgot to bring a camera.
Top
Post Reply
7 posts • Page 1 of 1