Ruckel Ridge to Eagle-Benson: My first, but not last, time

Ruckel Ridge to Eagle-Benson: My first, but not last, time

Well, I'd never been up Ruckel Ridge or on the Eagle-Benson trail so I decided to knock them both off in one trip. I wanted to spend a night out, so I made plans to camp at Smokey Spring. After getting assurance from the experts that it was safe to go up the ridge with a full-size pack, I took off early from work and drove over on Friday. (Edit: This was July 20, 2012, for the record.)

I got started about 12:30pm on an absolutely perfect day. I'd heard warnings about how tough Ruckel could be on a hot July day, so I was elated to start off with temperatures in the low-60s, a gusty 15-mph wind, and overcast skies. It had rained a bit before I got there, just enough so the moss was bright and perky but not so much that the brush soaked my clothes.

I think the conditions helped me focus on aspects of his hike I hadn't heard others talk about much. Folks seem to emphasize the steepness (3700 feet in what, a little over 3 miles?), the exposure, the heat and hard work, but I mostly found it gorgeous and pleasant. I love how the ridge is so narrow, pointed, and rocky, yet wooded and moss covered. Even the notorious catwalk is completely mossed over and has trees growing out of it. Views into Eagle Creek are deep and wild, yet you can see down the ridge to Bonneville Dam for much of the trip. This may make it onto my annual list.

Anyway, there's a full picture set if you're interested, but I'll just show a few of my favs here.

Bridge of the Gods from Buck Point: 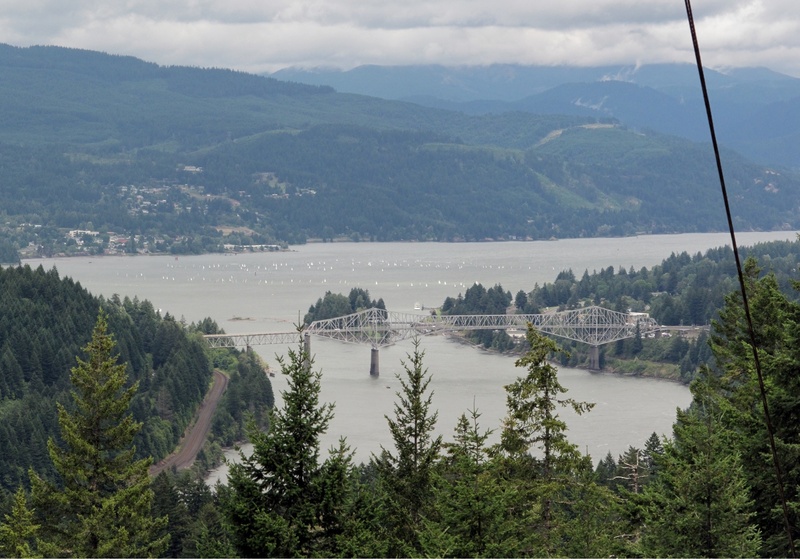 Talus slope just past the powerline: 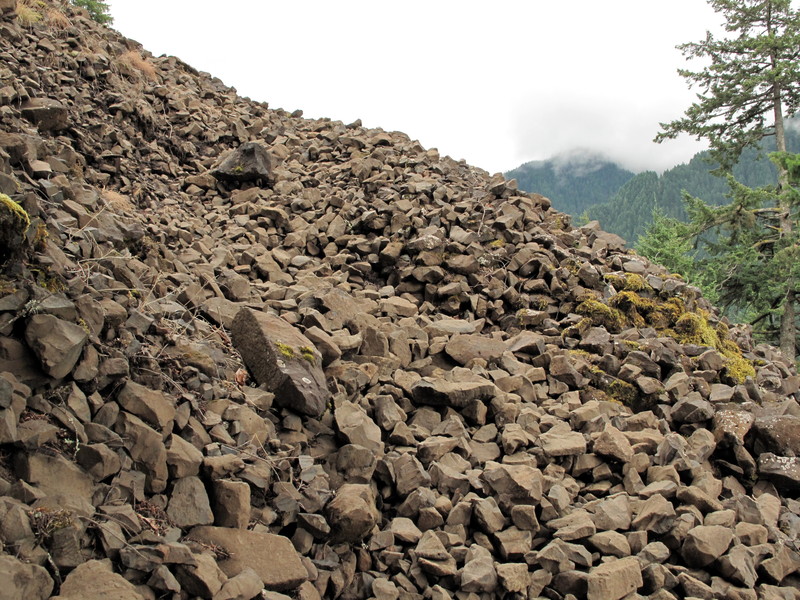 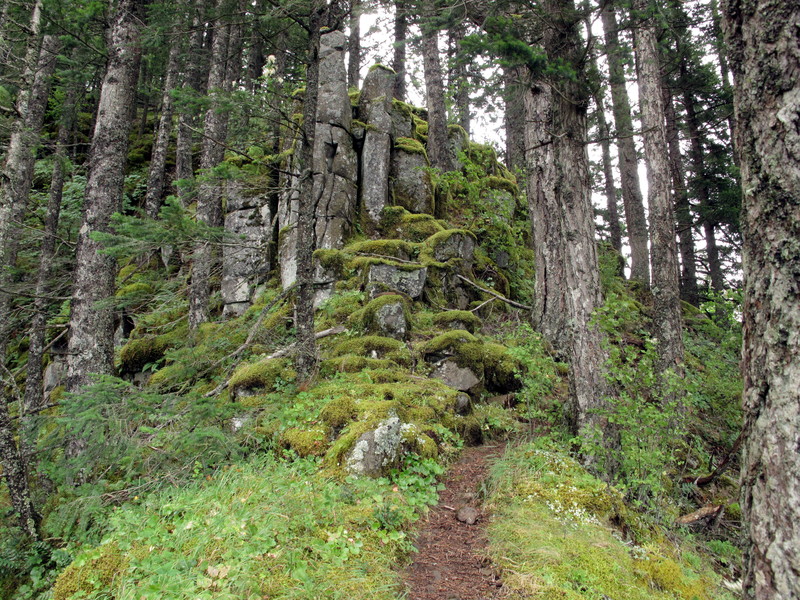 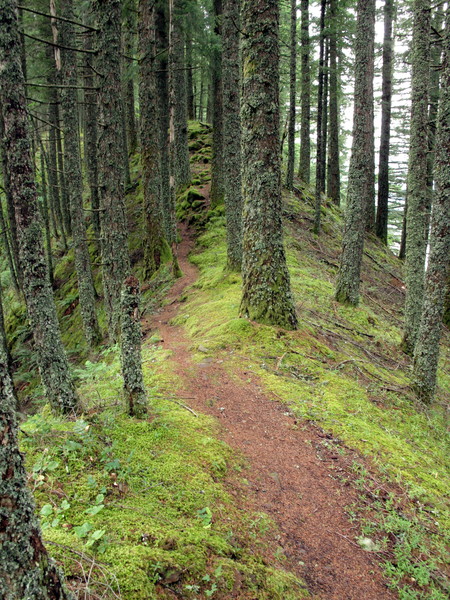 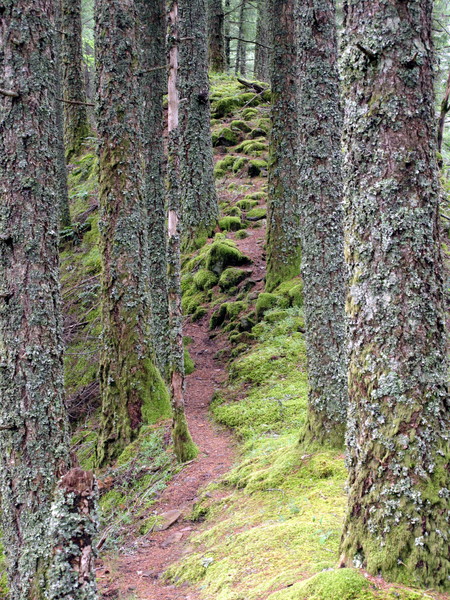 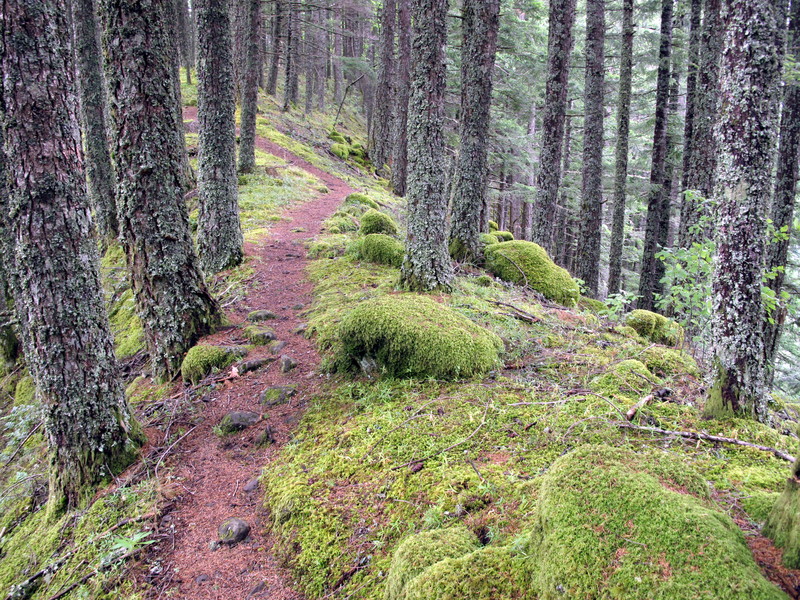 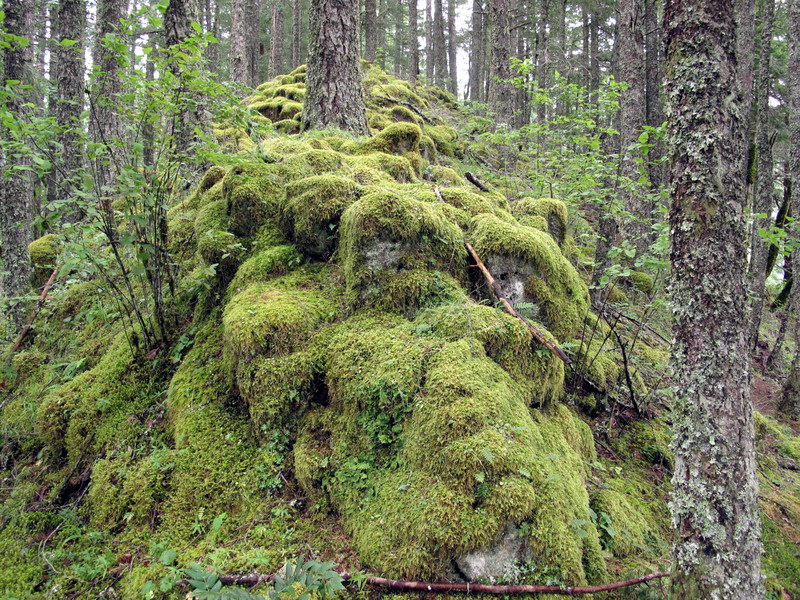 I eventually got used to the trail heading over/around/into/through unexpected spots. I'd see a big pile of moss covered pillars and think the trail just had to go around it, but no, it would go right over. Then other places it would drop to the side and skirt between the rocks and the edge. At one point, probably the most harrowing spot for me, there was a well-worn trail dropping to the right that I followed without looking ahead. Within a mere five feet or so I realized this was taking me directly to the cliff. Backing out those five feet spent most of my adrenaline for the day. It looks a lot more obvious in the picture than it did in person:

Then comes the catwalk. I knew by my altimeter that I was getting close, but when I investigated what I assumed was the catwalk, I changed my mind because there was no use trail heading to it and the moss on the rocks was essentially undisturbed. So I took the trail around to the right. It didn't take long to realize that was indeed the catwalk up to my left. So when I got to the other end, I went up and walked it backwards. (It's *there*, right?

) Then I walked it forward. It's certainly unique. My main gripe is it's so hard to get pictures of it! 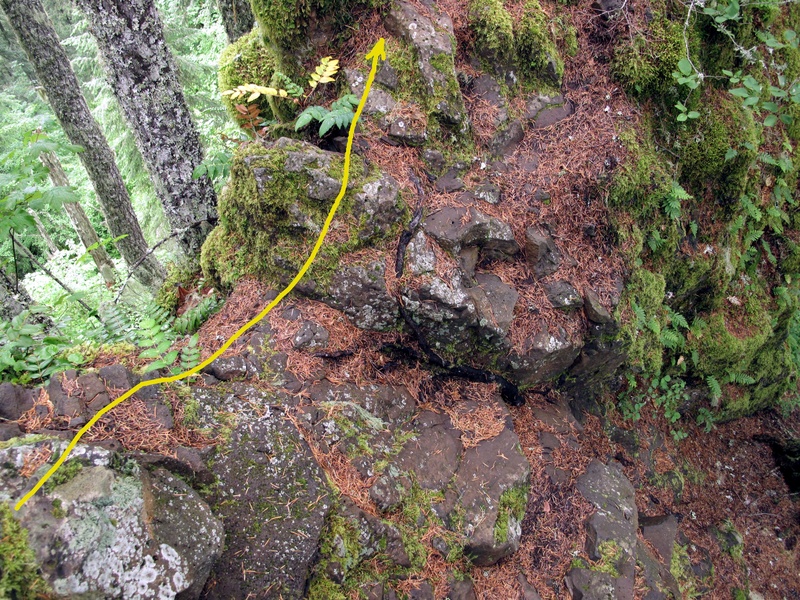 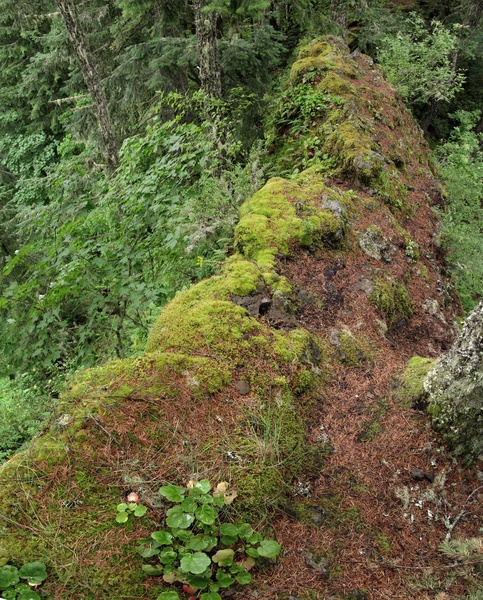 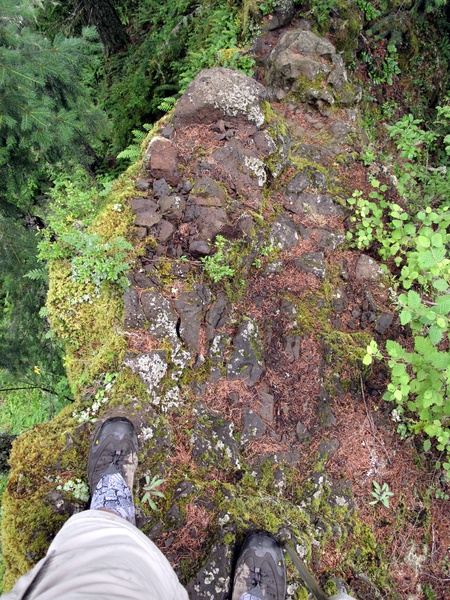 Here's a couple shots looking back at it: 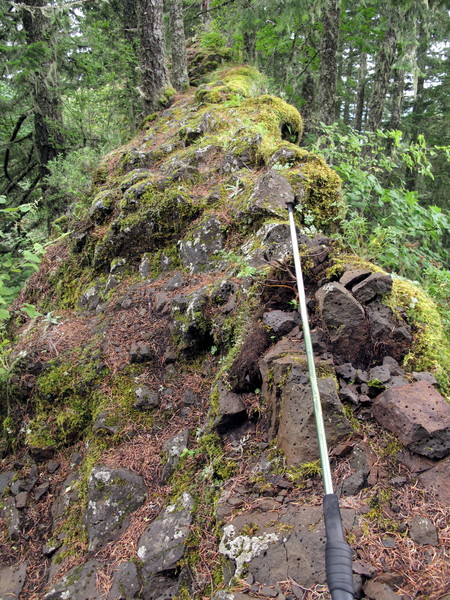 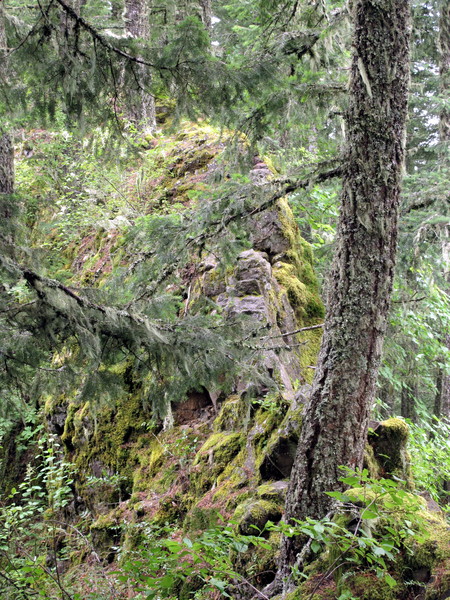 After the catwalk, there's a brief, steep, downhill section, a final view down into the canyon and back to the dam, then the trail turns upward and you knock off the last 1000 feet in about 2/3 mile. 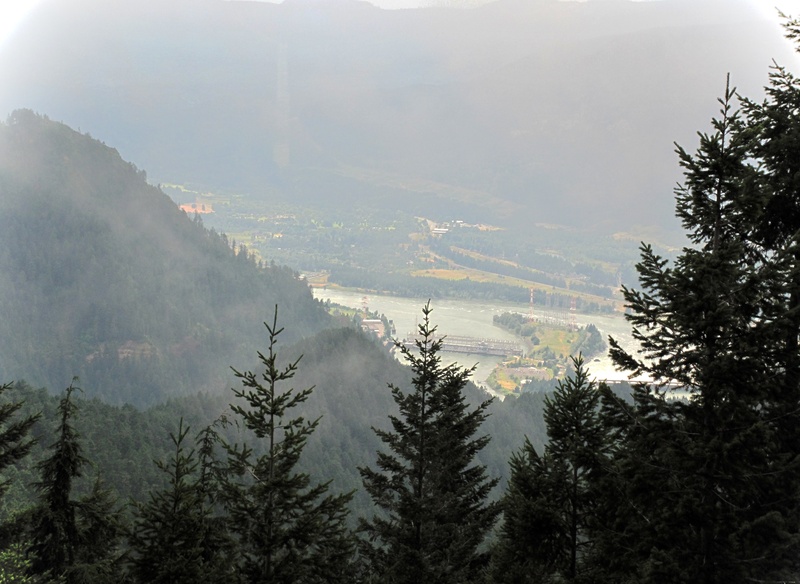 The climb ends at a broken down sign of some sort. Question for you historians: was Ruckel Ridge at one time an official trail? It was foggy on top, vintage Benson Plateau. I had never walked Benson Way, so I took that route across. I'd heard there were some southward views off that trail; but other than a sense of some distance here and there, the fog kept me focused on the forest. There's an interesting and huge blowdown. 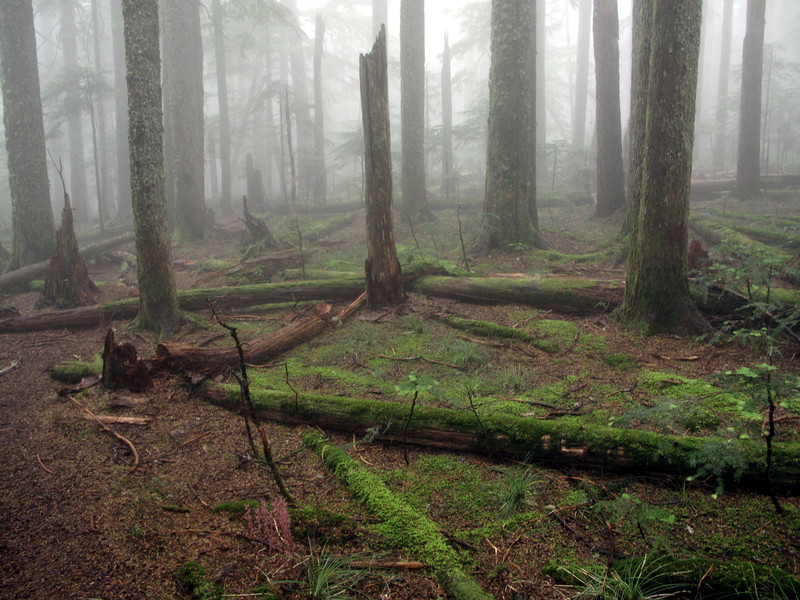 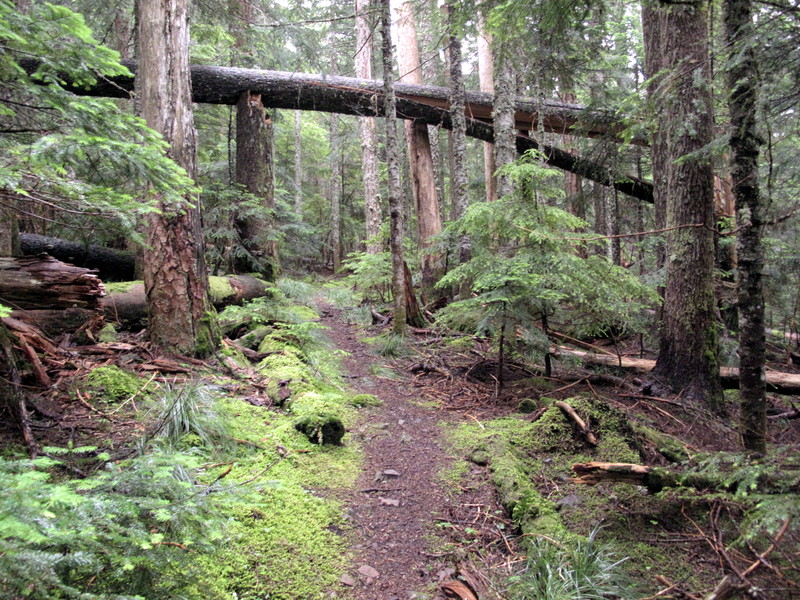 I spent the night at Smokey Spring and headed down Eagle-Benson the next morning. There are several open and exposed viewpoints on that trail. I was surprised in particular that you can see Bonneville Dam from one of them. 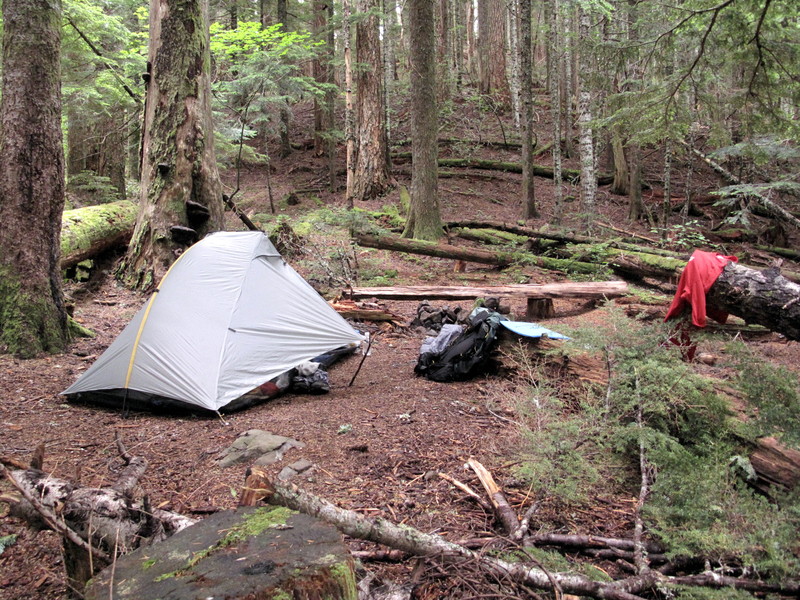 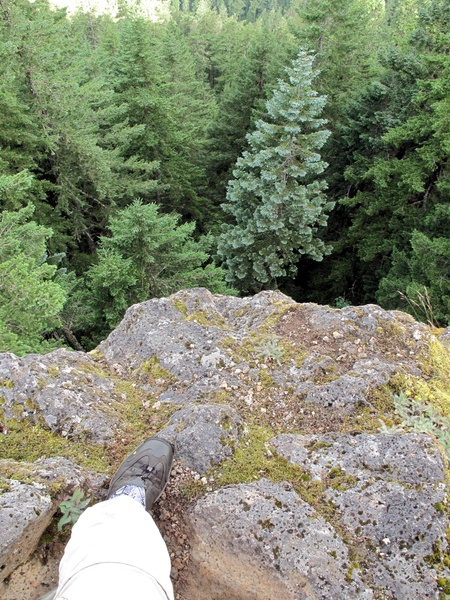 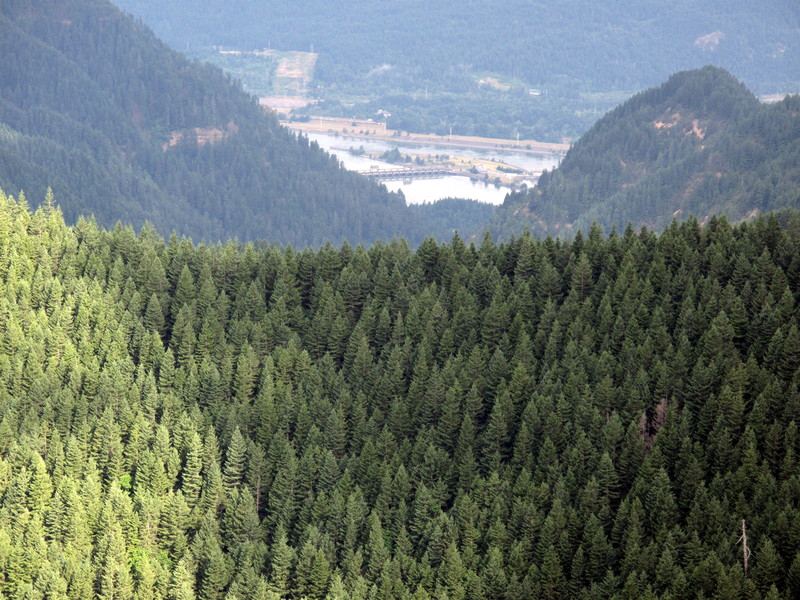 I think the very best spot on Eagle-Benson is near the bottom where you can see the falls on that little (apparently) unnamed creek. The falls: 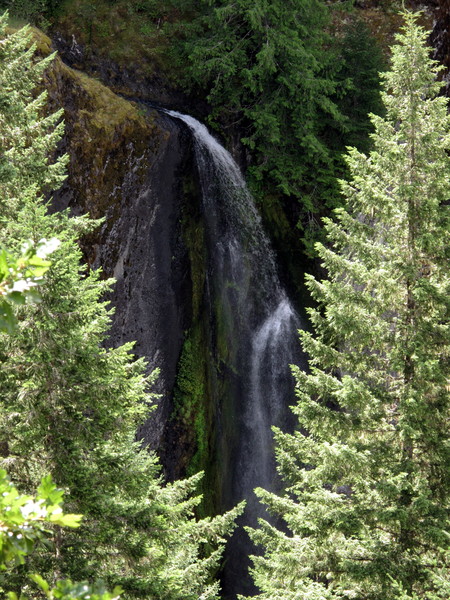 The viewpoint from which I shot the falls: 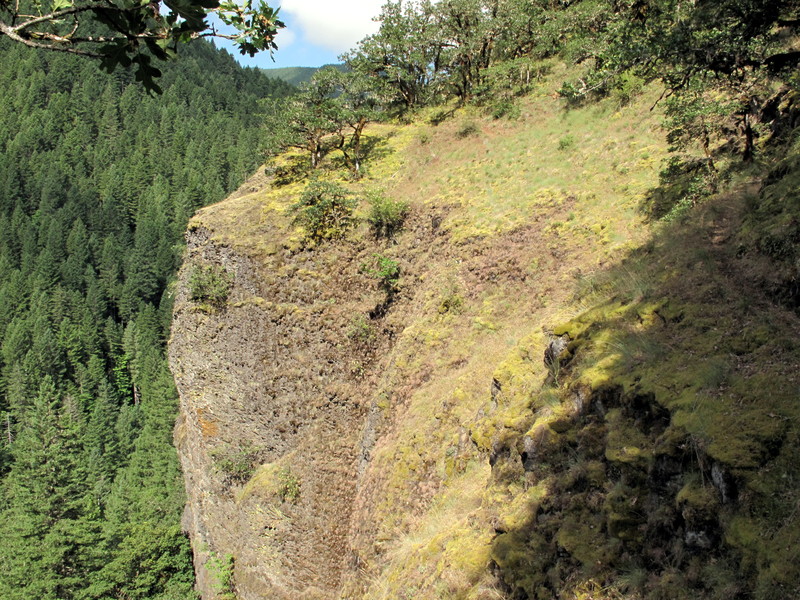 So that's it. This ended up being a much longer TR than I'd expected to write, but Ruckel Ridge surprised me with its beauty. See you next year, Ruckel!
Last edited by texasbb on July 29th, 2012, 7:01 am, edited 1 time in total.
Top

I may be wrong, but I think that sign looking thing you found at the top of Ruckel Ridge Trail may be the old trail register that used to be in use up there. I signed in up there back around 1995ish....

Excellent report and photos mannnnnnnnnnn! I'd say this is a "Popular Trip Report" in my book.
Last edited by MarkInTheDark on July 28th, 2012, 5:02 pm, edited 1 time in total.
Top

Great pictures and report! I did the same loop earlier this year and enjoyed it.
Some people are really fit at eighty; thankfully I still have many years to get into shape…
Top

'Chuckle' Ridge is awesome! Hard to get up to the top though when your TFF won't stop
making you laugh super hard!

Thanks for the report, The trail is the "view" in my opinion.

WE were up there on Saturday, blue skies and mild temperatures. Just did the loop though. I did your route a few winters ago.

I try to do it about 4 times a year during the different seasons. The loop that is.

The funny sign at the top I always thought was the wilderness Boundary sign, I could be wrong though. I did inscribe it with my group time to the top (I consider this the top) 4 hours 10 minutes. I lead hikes and know that this is the benchmark time for this hike. That includes breaks and lunch and photo opportunities.
Top

rick6003 wrote:Thanks for the report, The trail is the "view" in my opinion.

I gotta agree--it's lush, rugged, green, treacherous, and pleasant all at once! I'm definitely gonna put it on my list of regulars.


rick6003 wrote:The funny sign at the top I always thought was the wilderness Boundary sign, I could be wrong though.

That makes sense. The frame would be unusual for a plain old trail sign. The wilderness boundary seems to follow the ridgeline for the last third of it, so a sign right at the top would make sense. But would they only put such a sign on an official trail?
Top

Thanks for posting your TR. I don't know that I'm quite up to this challenge yet, but someday. Soon, hopefully.

Were there a lot of loose rocks on this trail? i.e., feet-slipping-out-from-under-you treacherous footing shenanigans?
Hannah

hlee wrote:Were there a lot of loose rocks on this trail? i.e., feet-slipping-out-from-under-you treacherous footing shenanigans?

Not really. There were a few spots that took a little care, but for the most part the tread was rock/moss/duff/root. I was probably there under perfect conditions, though, with a recent light rain having knocked down all the dust and firmed up the footing without making any mud. I did do a quick, unintentional "sit" once, but it was on relatively flat ground when I wasn't really watching my feet; I just hit a slippery root or something. I never felt worried about my footing on any of the exposed parts.
Top
Post Reply
11 posts