I'd been up Whetstone Mtn before from the Opal Creek side but this my first time from the N via Tr 546. This is Hike #38 in Lorain's 100 Classic Hikes in Oregon. The directions in the book will get you to the TH but I found that going up FR 7020 is a bit quicker than circling around via FR 7030. From the TH, Tr 546 heads S to reach the top of Whetstone Ridge in about a mile. 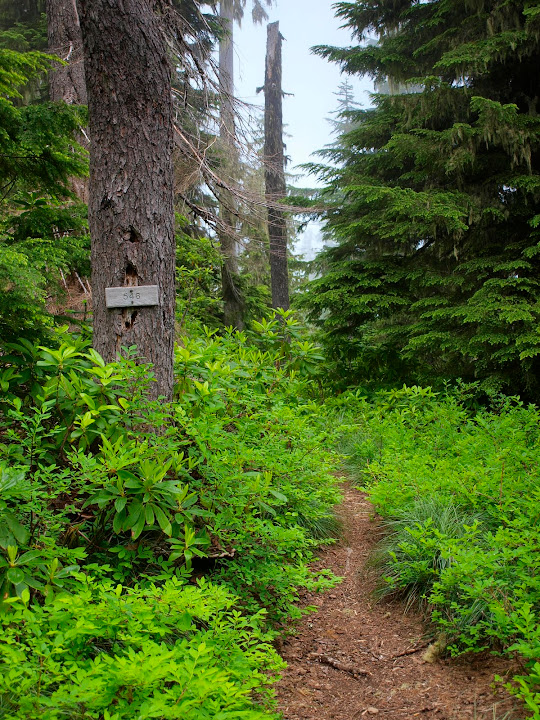 It was overcast in Portland and looked to be clearing over the ridge, but it seemed like a good idea to go for Whetstone Mtn and its views while I could. From the summit, I could see the clouds pouring over the ridge below. 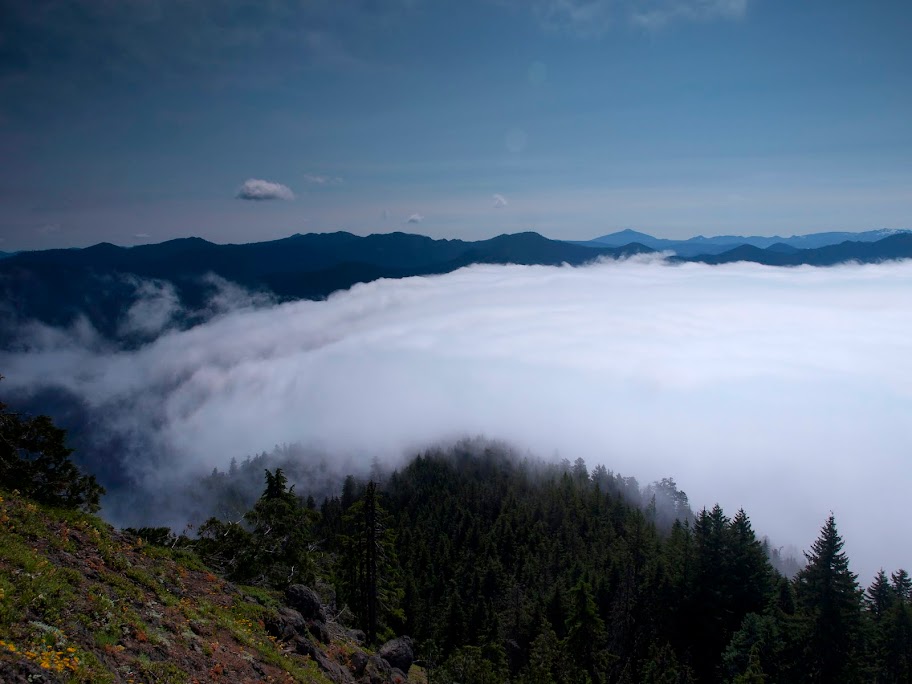 Jefferson was visible on the far horizon to the S, seemingly floating on a fluffy sea of clouds. 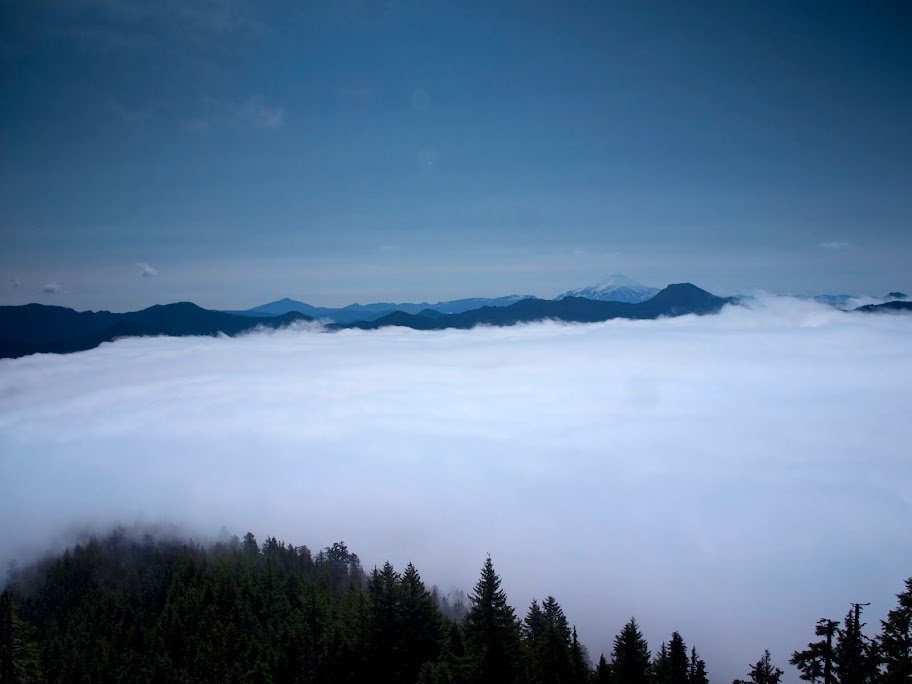 To the N, Hood was dimly visible amidst a constantly changing swirl of clouds. 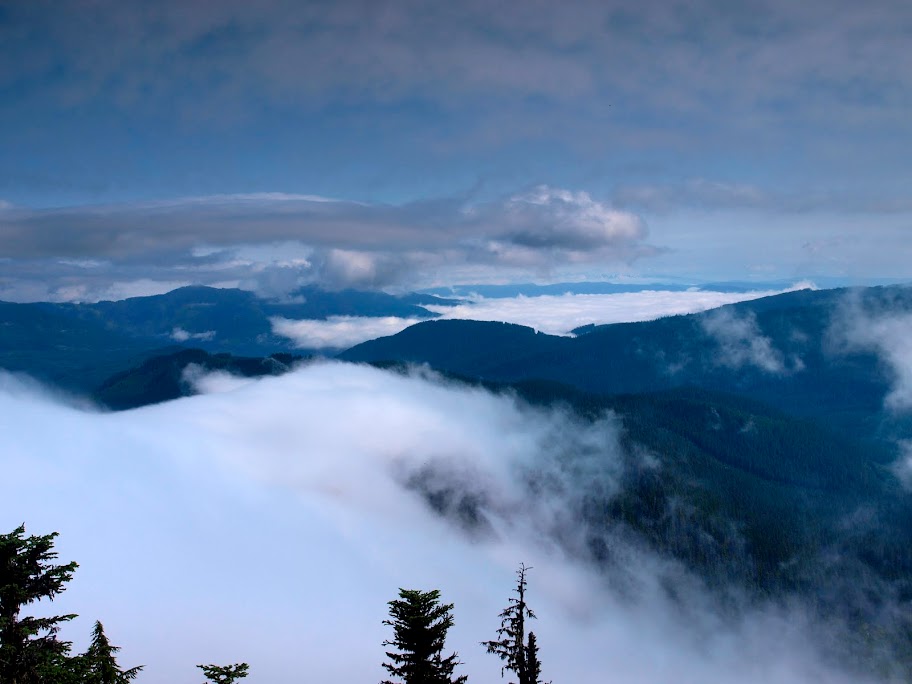 After some squinting, I concluded that the pointy tips of Three Finger Jack (T) and Mt. Washington (W) were also visible on the far S horizon, just over from Mt. Jefferson (J). 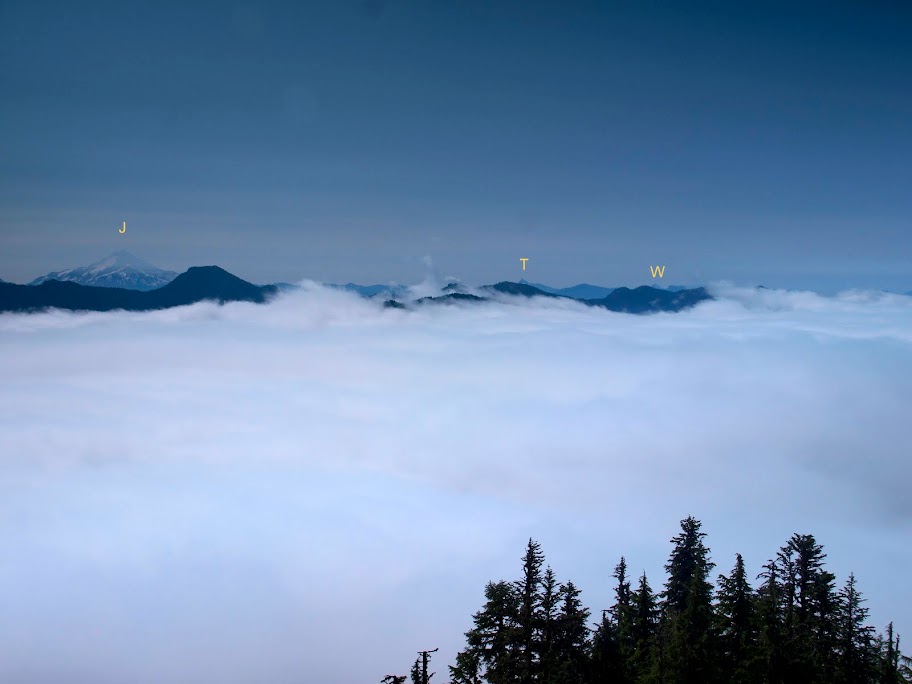 My original plan had been an out & back to Twin Lakes, so I headed E on TR 546. Along the way this grouse (arrow) started clucking and juvenile grouse shot, one after the other, out of the bushes on one side of the trail, directly past me, and into the brush near her. Thunder (or cardiac arrest) chickens in training. 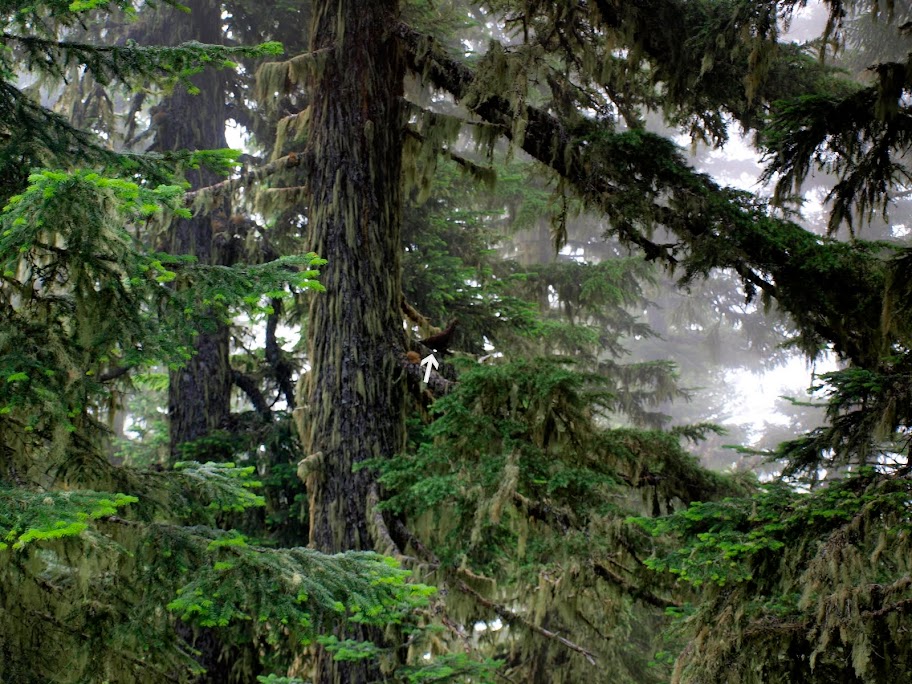 I kept going E and met two hikers who said it was clear toward Twin Lakes but the further E I went, the gloomier it got. At the Silver King Lake trail junction, I decided to see that lake instead of continuing on thru the mists. And, it actually looked like there might be a sun break over the lake (ha!). After a short trip down a sketchy in places but otherwise OK trail, I reached the lake and its retinue of mosquitoes. Even with the overcast, it's a pretty little lake. 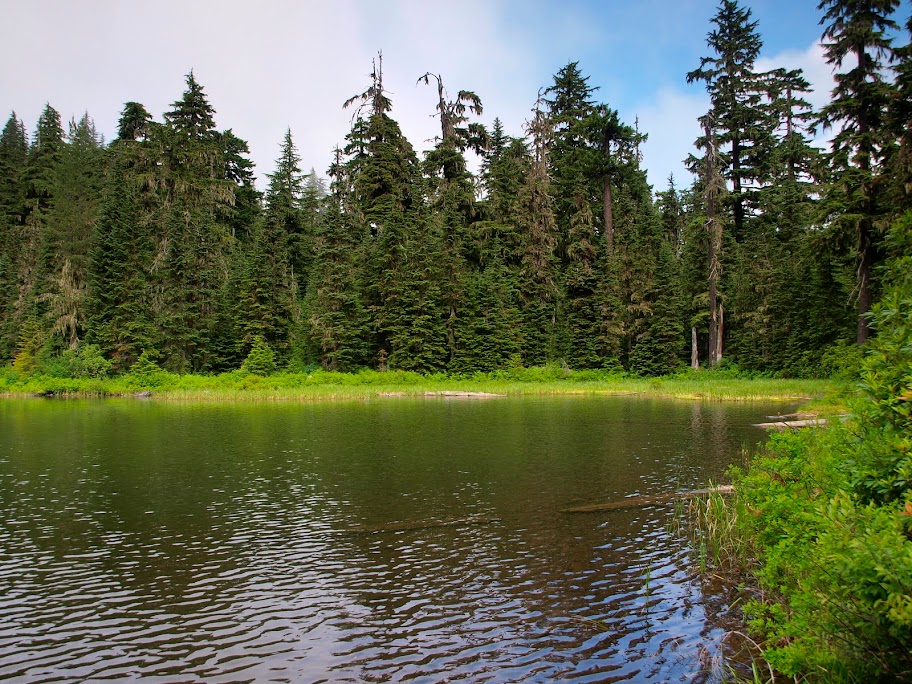 When the mist started sweeping across the lake surface, I decided to head back. 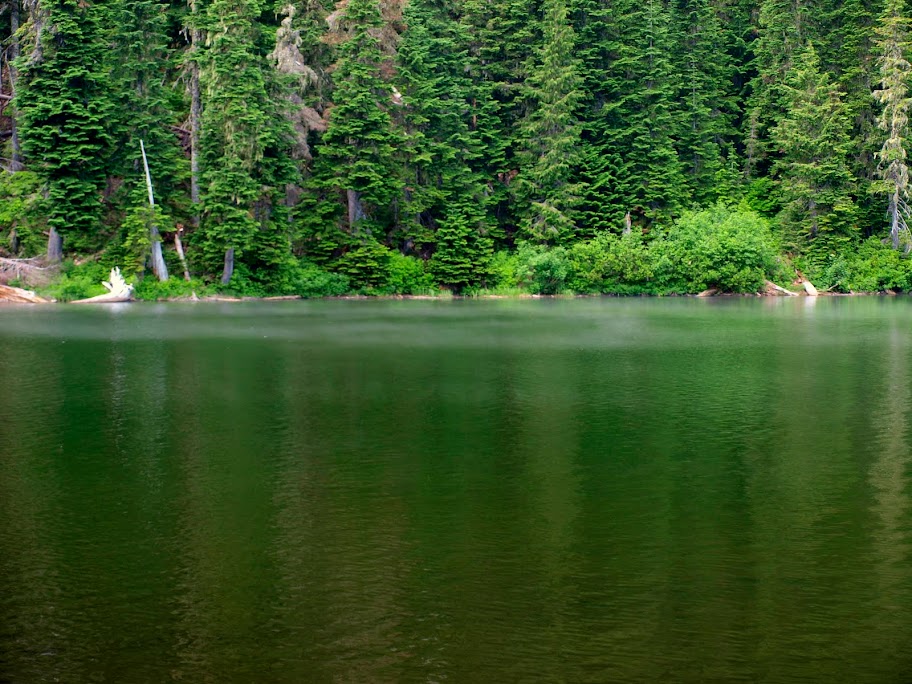 Tr 546 is in generally good condition and starting at its higher TH gives you quicker access to a number of hiking opportunities in the area. Definitely worth another visit should a sunny day ever materialize when I'm not at work. 11.6 mi RT, 3000' EG (includes Whetstone and climb up from the lake). 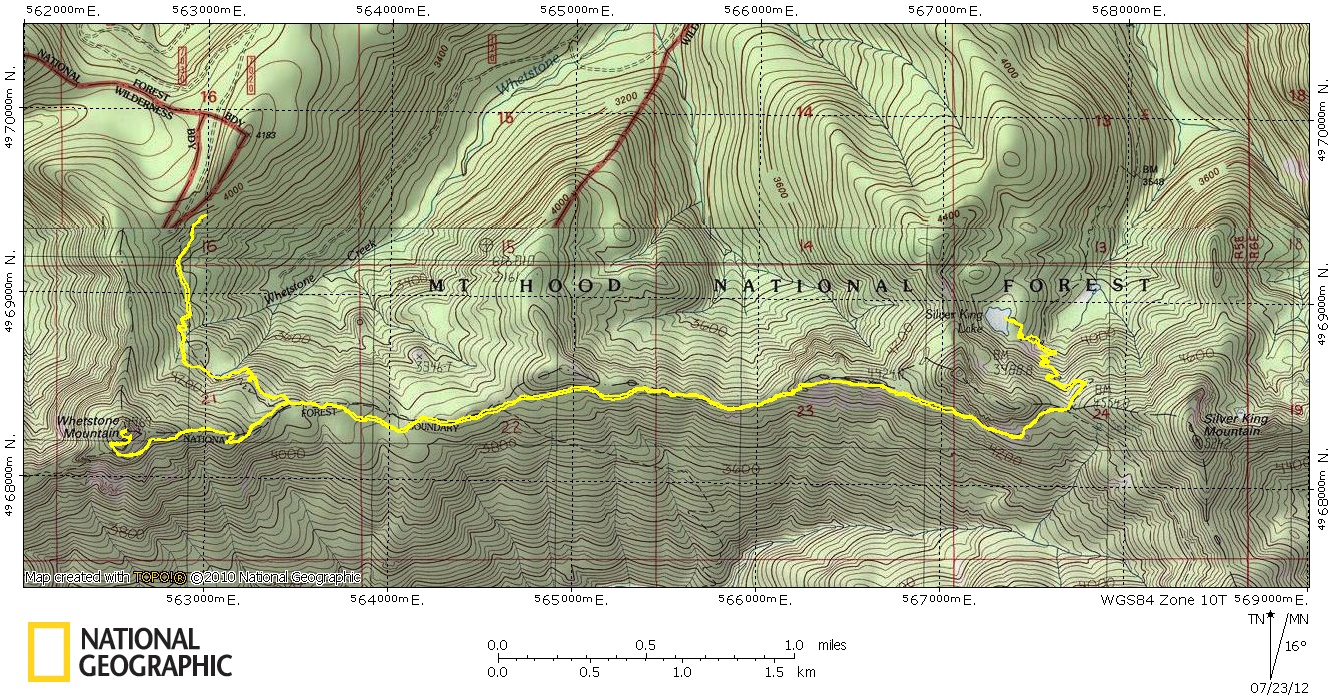 Thx for the very nice and timely report. How is the 7020 road?

pablo wrote:Thx for the very nice and timely report. How is the 7020 road?

I took 7020 up (from its junction with 7030 past Bagby) and 7030 back. I thought 7020 was a bit shorter and in better condition than 7030. No real problems with high centering, impossible potholes, or washboarding.

There's one corner on 7030 that is heading toward being washed out by an seasonal drainage - one more good wet winter and 7030 will not be an option unless you want to walk an extra 3-4 mi to the TH.

Enjoy your exploring in this area. The trail from 546 down to Silver King Lake is OK and (I guess) continues on down to Bagby. But it's a steep one.
Top

VanMarmot wrote: Enjoy your exploring in this area. The trail from 546 down to Silver King Lake is OK and (I guess) continues on down to Bagby. But it's a steep one.

Yes, that trail is the Bagby trail, and goes from Elk Lake all the way north to Bagby (14 miles or so). It is a little sketchy in places, but does go all the way through.

Thanks for the photos of Whetstone. Haven't been there in a while, but it is a neat place. Although quite a climb.
Life is not a journey to the grave with the intention to arrive safely in a pretty and well-preserved body, but rather to skid in broadside, thoroughly used up, totally worn out, and loudly proclaiming: WOW-What a ride!
Top
Post Reply
4 posts • Page 1 of 1