I have been eyeing Barrett Spur ever since I saw that massive boulder teetering on top. However silly it is I kept on thinking to myself "I want to stand on that boulder!" Unfortunately the status of the Dollar Lake Fire closures seemed very unclear to me and I didn't want to press my luck. I called the ranger station in the morning and got a response along the lines of "You're heading out there? Great! Could you call us when you're back to update us on conditions?" The lady i spoke with thanked me for a positive call about the burn area after all the criticism thrown at the forest service. I told her about Tom's blog and the long term positive perspective it held. It's a great read and i highly recommend it.http://wyeastblog.org/2012/06/22/after- ... lake-fire/

Since Tom has already done a great job covering the burn area I won't go into much detail about the lower portions of trail. Here are some of the views leading up to the snow which started around 5200ft. 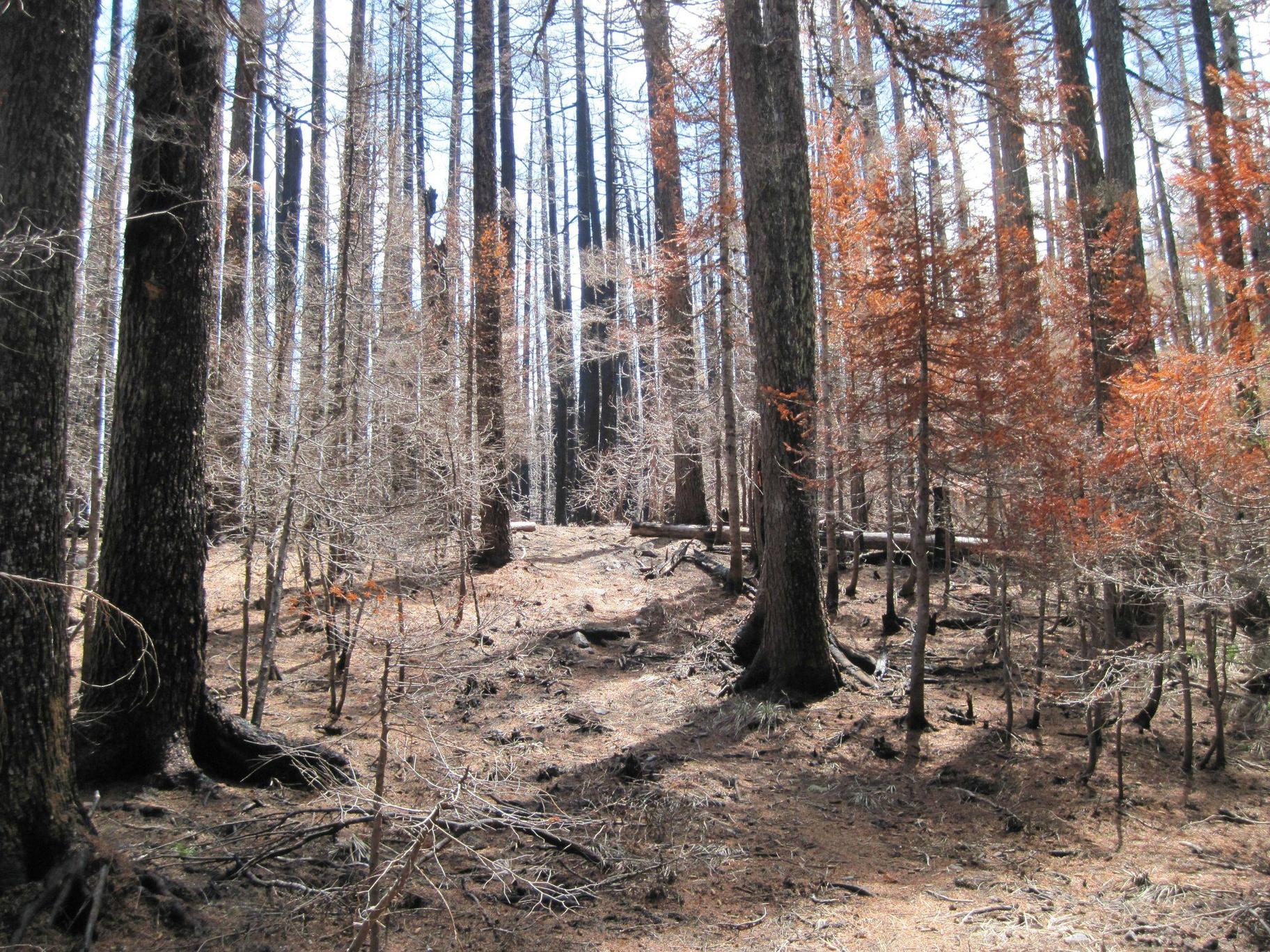 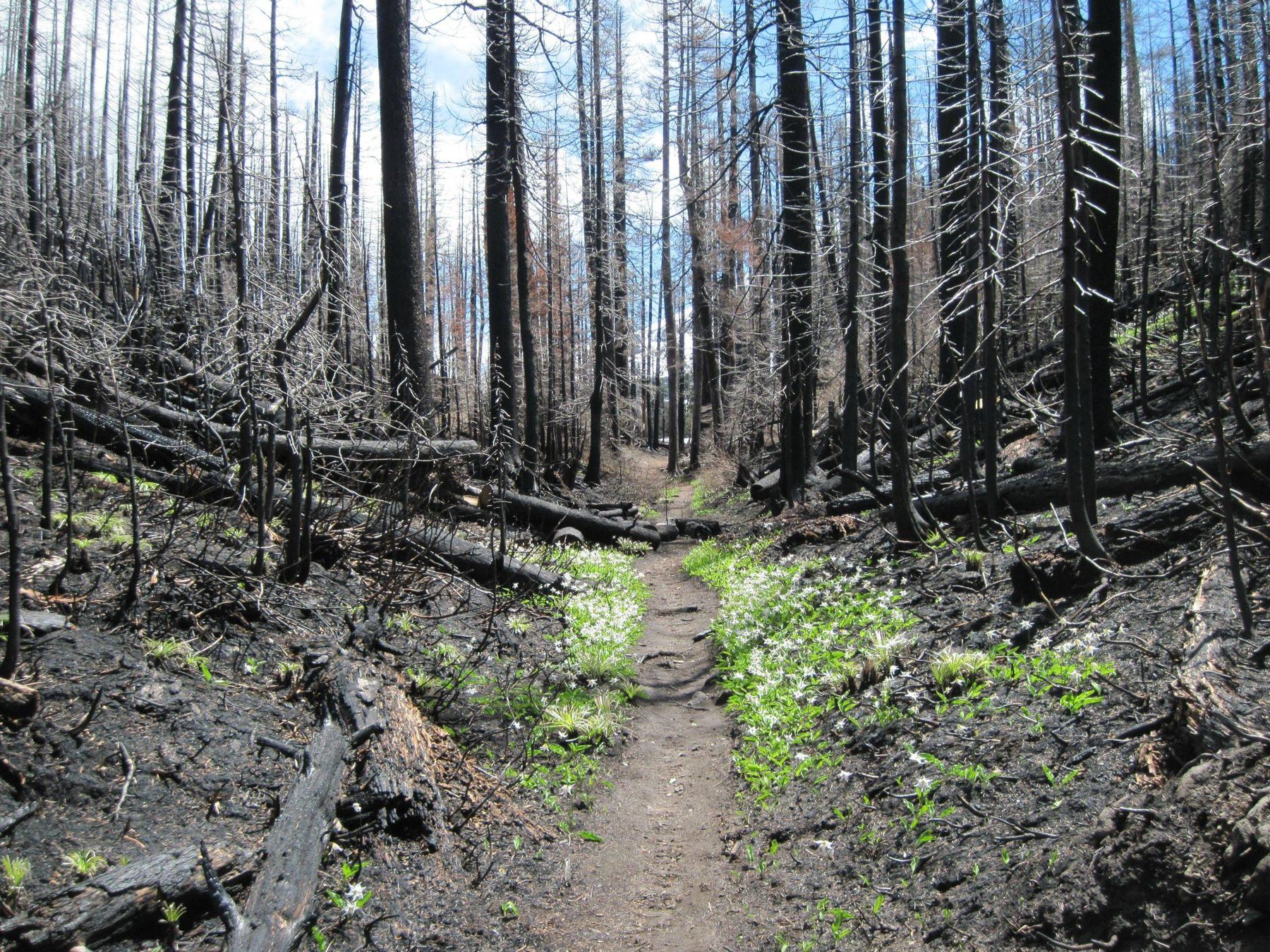 I really lucked out with snow navigation because a few hours before I headed out a hiker came through with pink tape marking the approximate location of the trail starting from the snow level. He said he was paranoid about getting lost and wanted to make sure he could make his way back. I'm not sure if he will leave them, but I hope he does as they seemed to be very accurate. 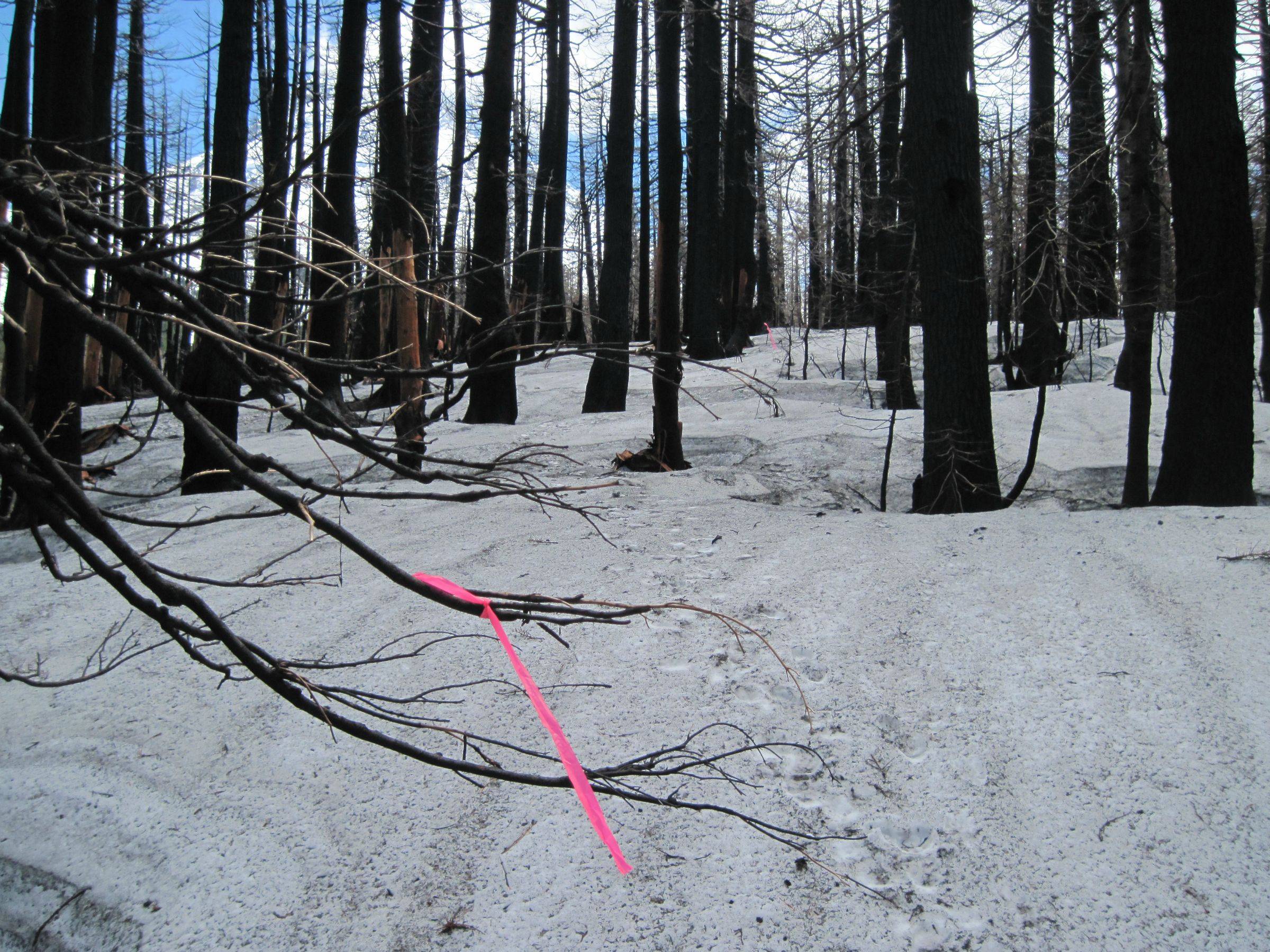 Hiking through the burn area was a pleasant change, but there were a few trees that seemed to have been been caught grimacing as they burned with their family. Breaking their vows of secrecy to keep the forest and human worlds separate their expressions are frozen in decay as they crumble. The forest whispers of this breach, uncertain if the humans will catch on..... or at least I like to think that's why there are eerie trees like this one. 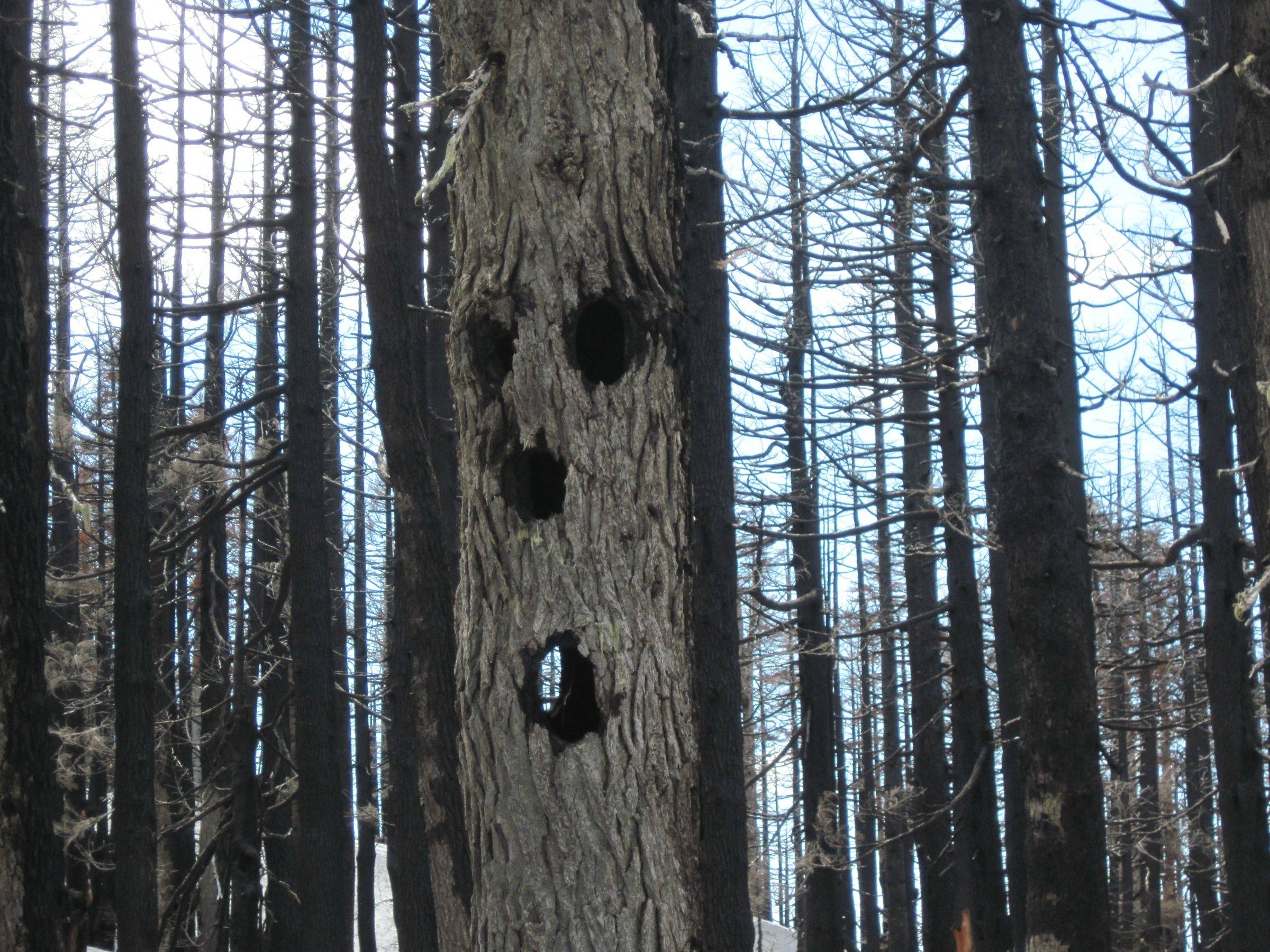 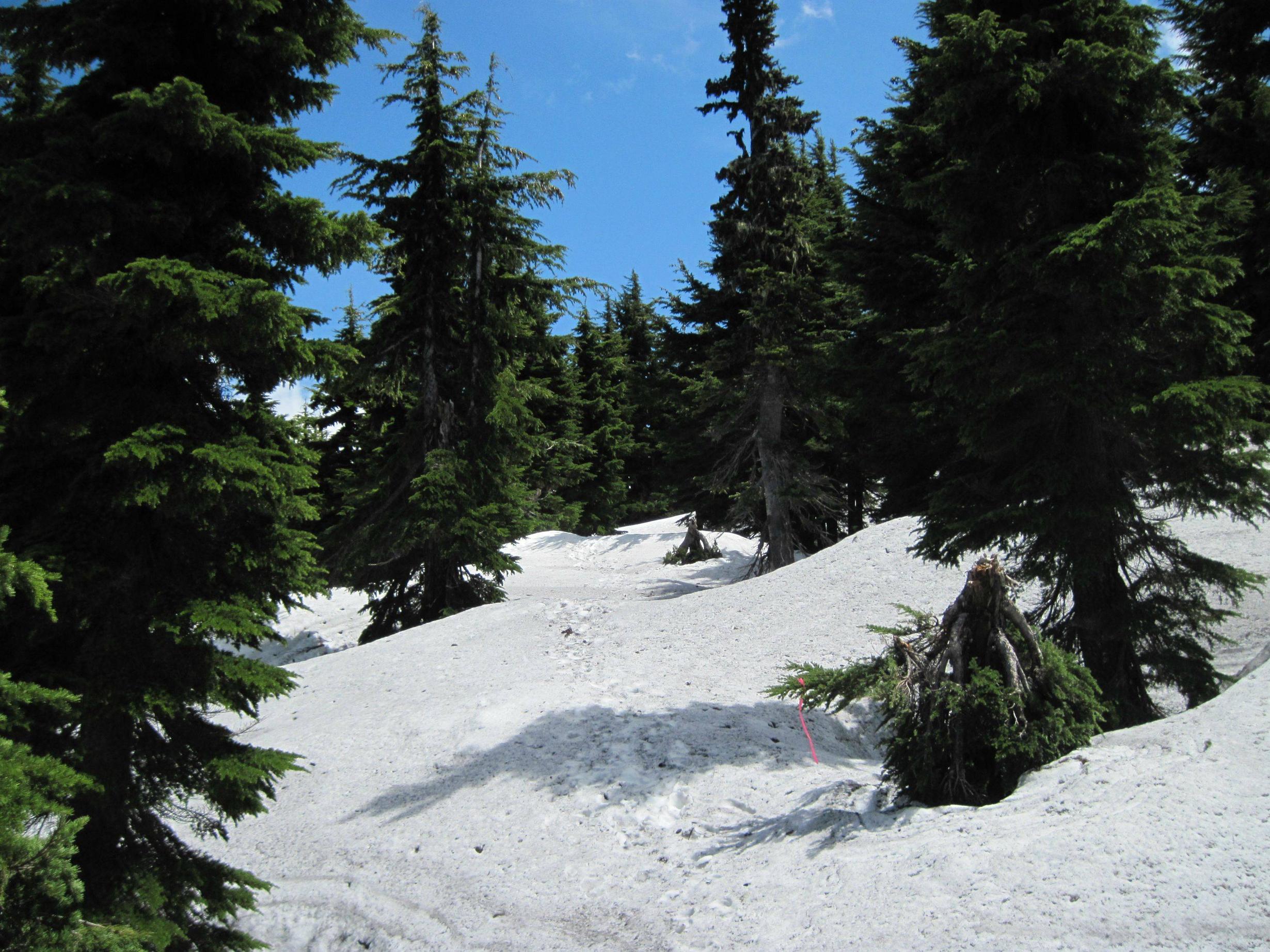 The next photo is where the pink flags stop and the fun begins. I made up my own route to the top sticking to ridge where the snow was firm. I hauled the snowshoes all the way up only to use them as a backrest on top. 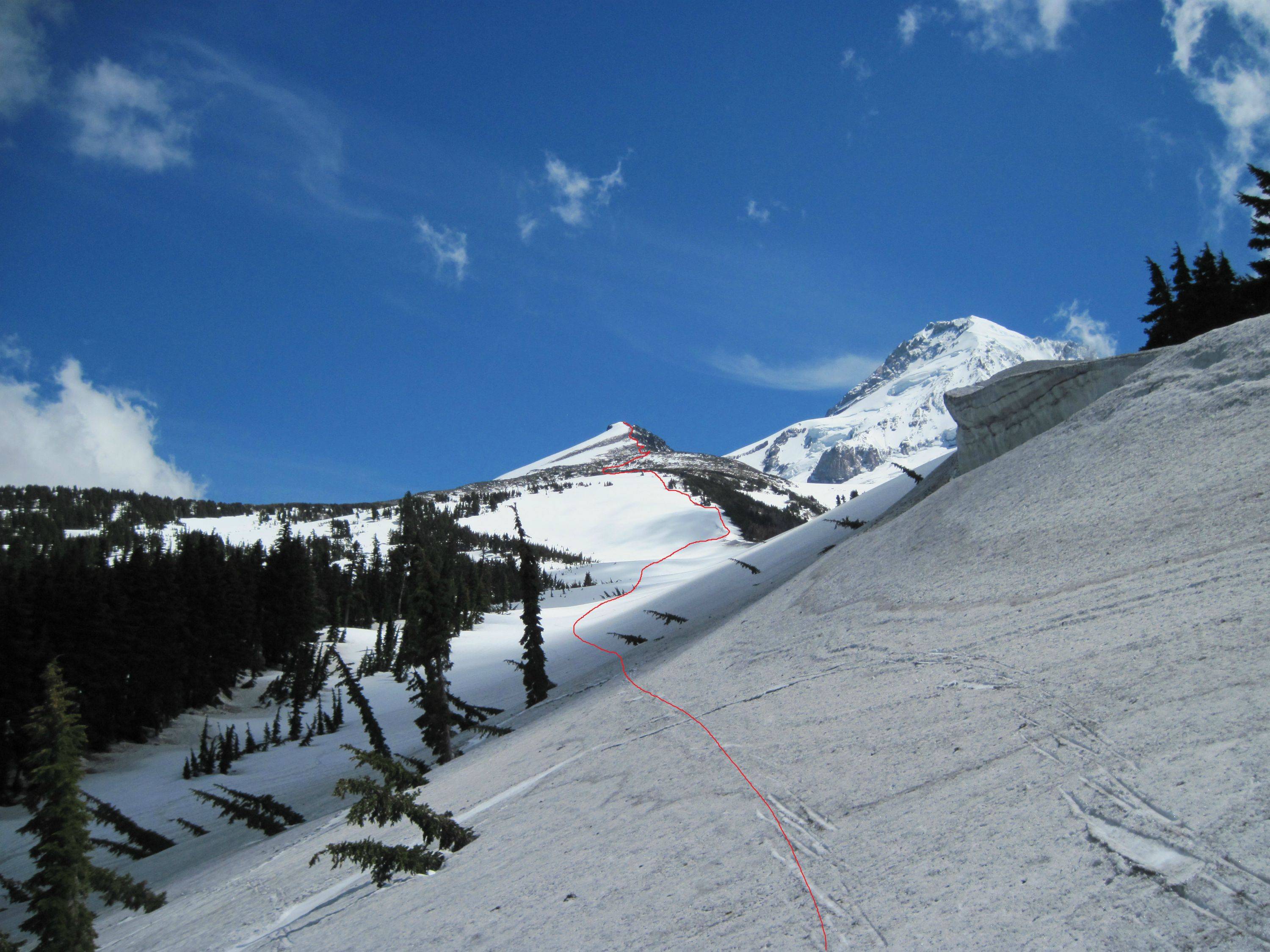 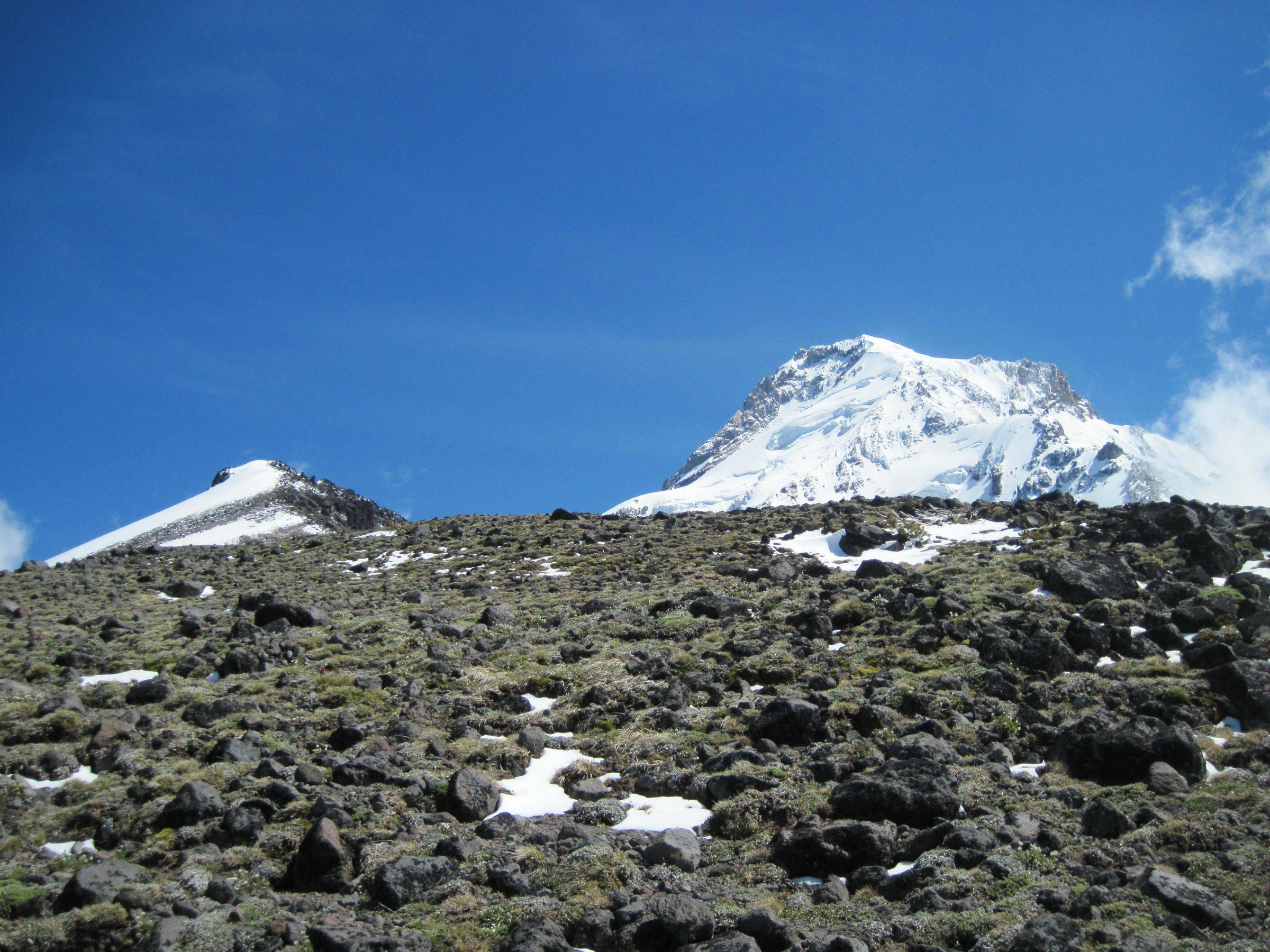 I was about 20 seconds from the summit with the view of Hood blocked when I heard a loud rumbling and whooshing sound. I quickly climbed up, but as the sound died down I summited to see the this slide slithering to a stop. So close! My reconciliation was climbing the big boulder further down and making it from TH to summit much faster than planned. Only 2hrs 25min. 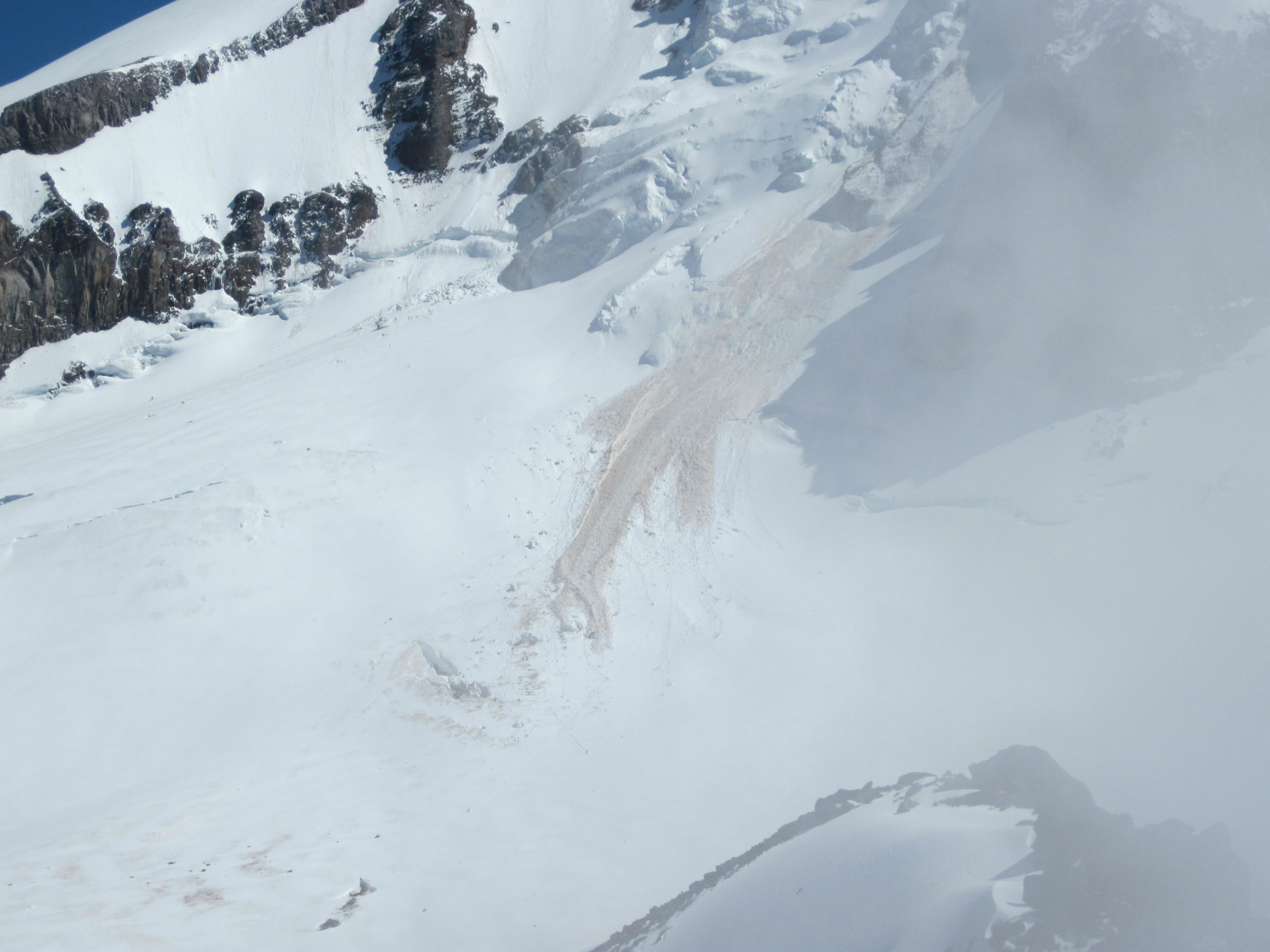 I was getting rid of my tanlines on top

when I noticed some people way up on what I think is Cooper Spur. I wasn't bothered until i realized i was being highlighted by the bright yellow z-lite pad i was laying on and then i remembered the incredible zooming capability of some cameras... I just hope I don't end up in the next edition of hikers gone wild. At the very least I want a copy! 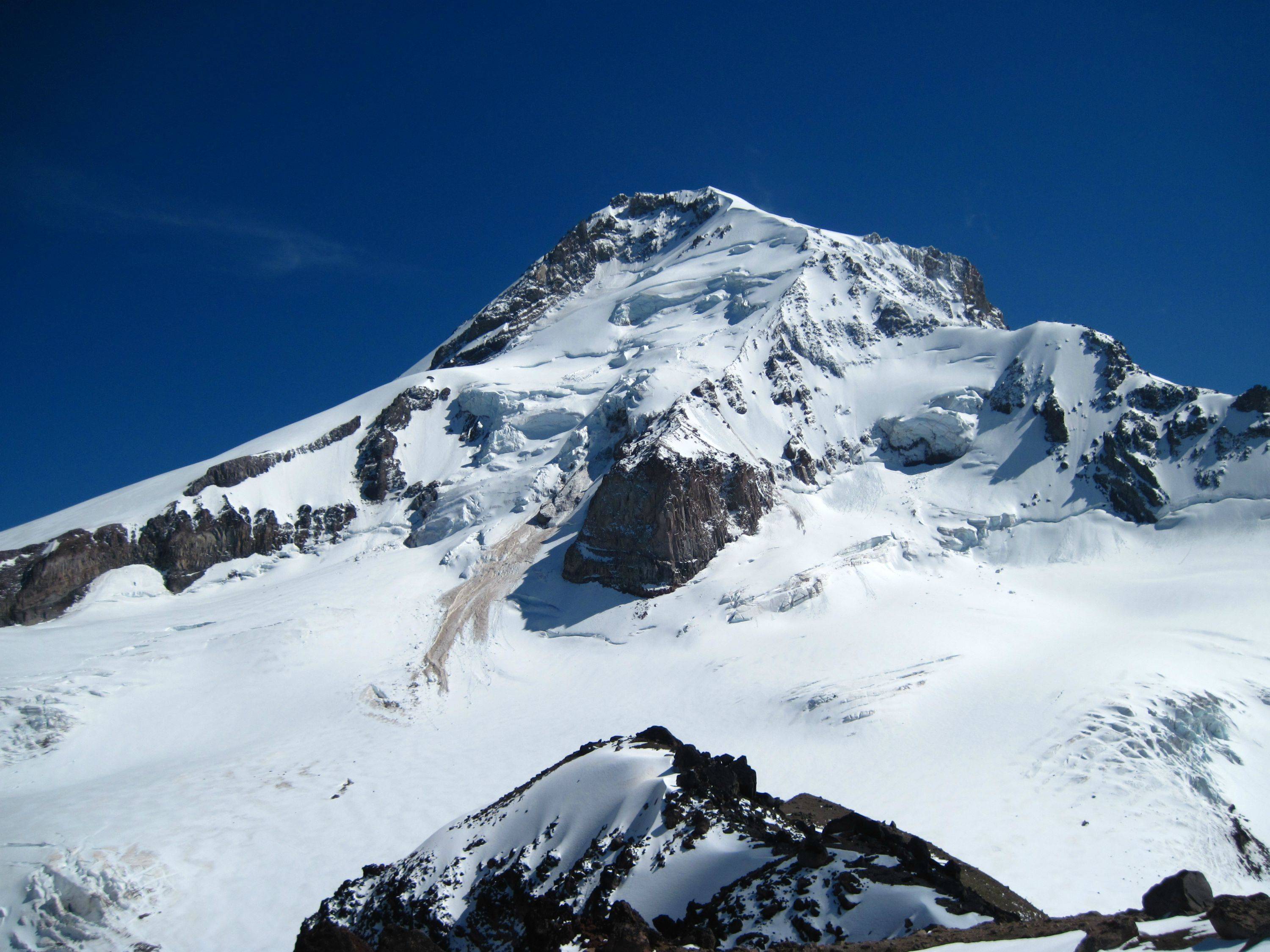 Nice views of the burn area.

Lots of boot skiing on the way down. 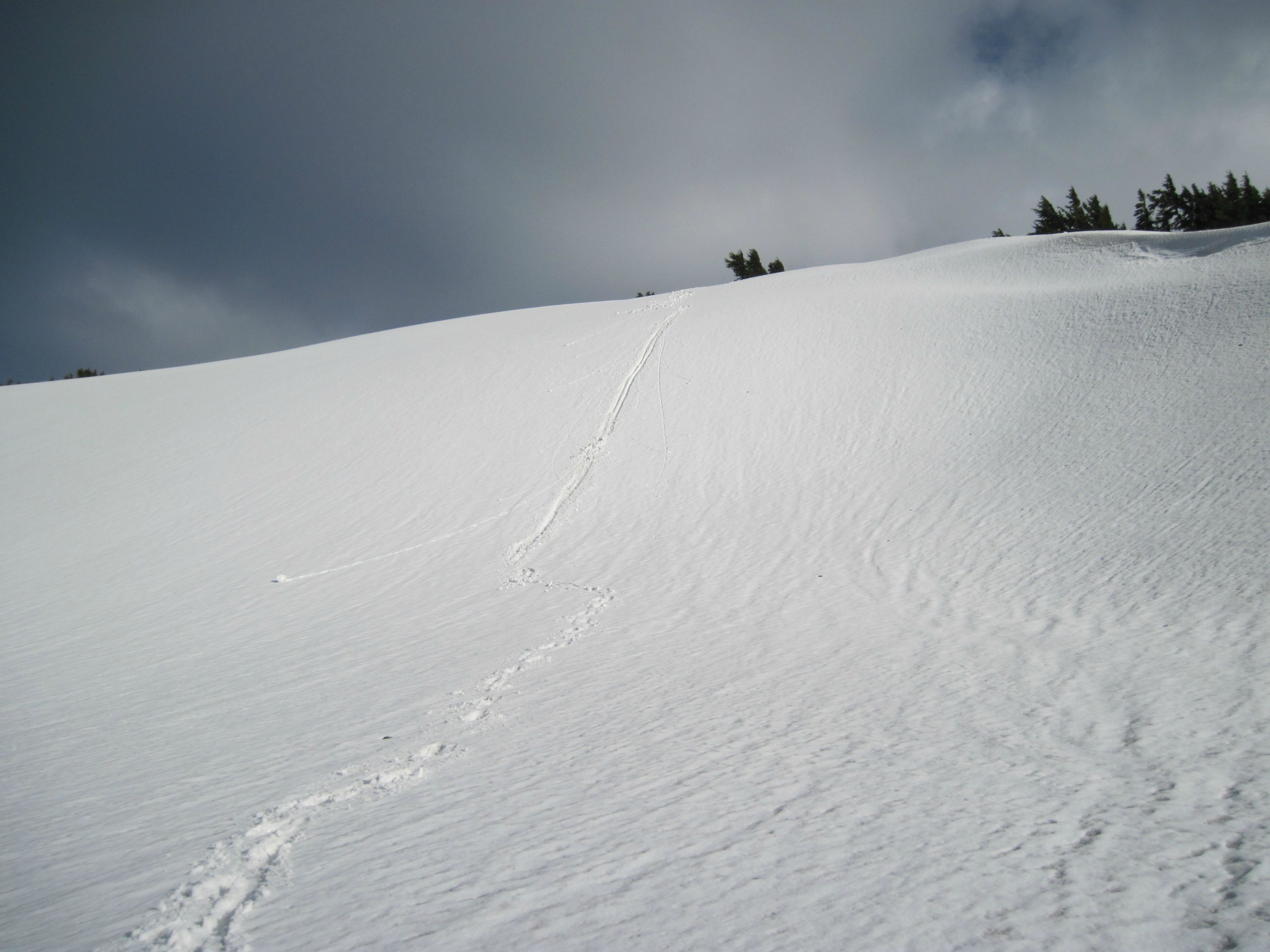 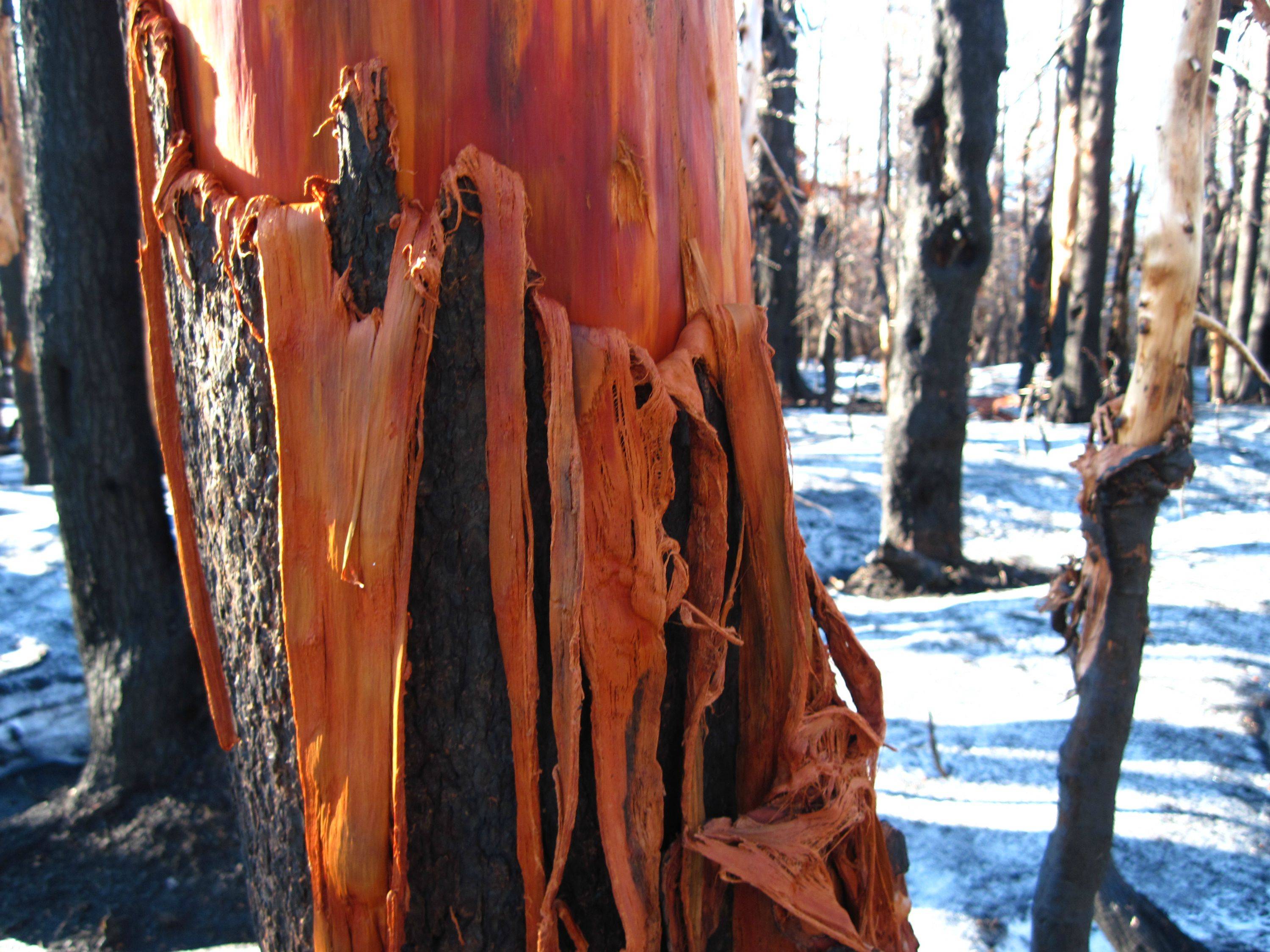 Another perfectly timed hike to get shots of hood from Lolo Pass road. 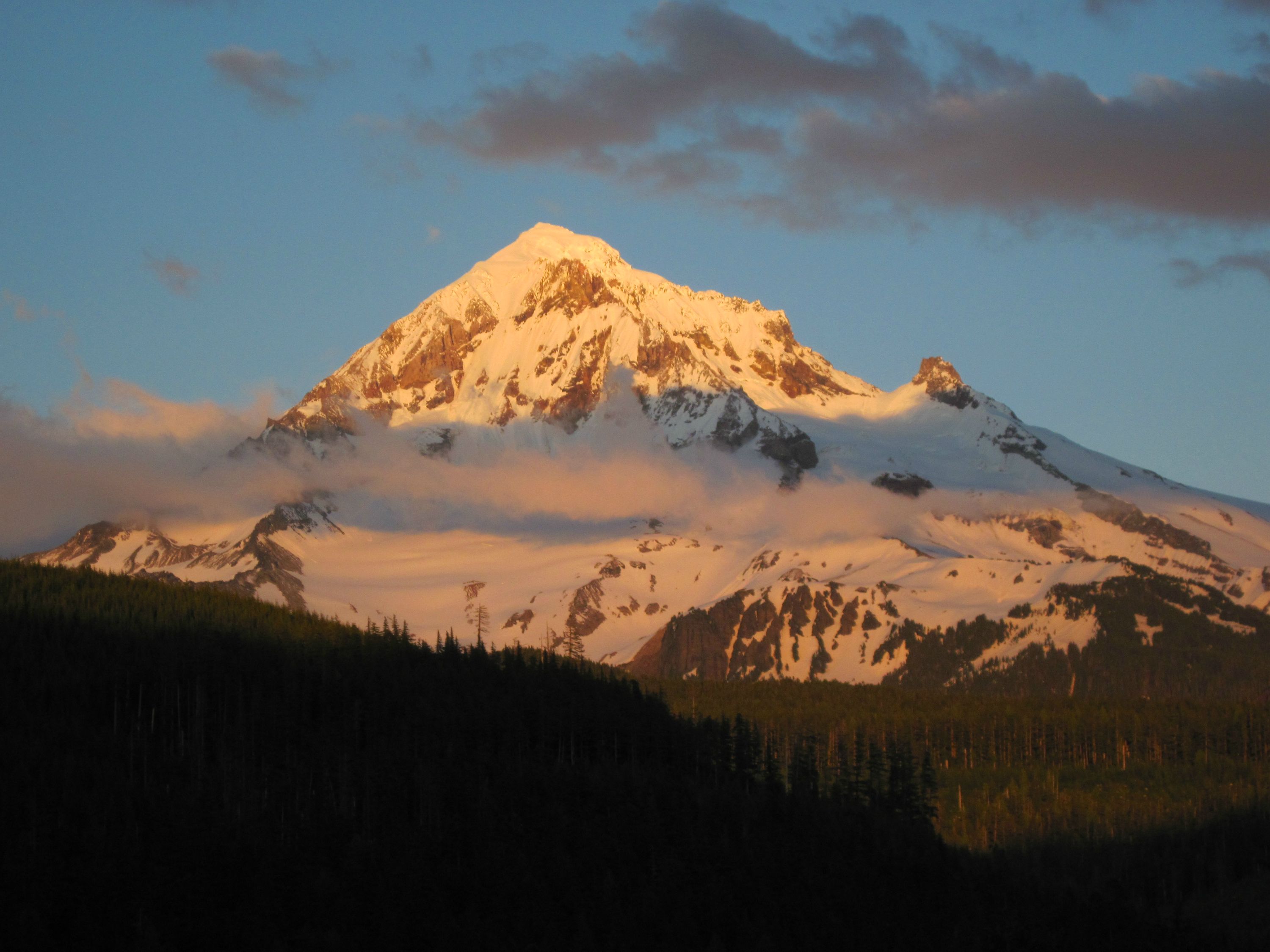 excellent and well written TR and great photos, the panoramic view into Elk Cove is the one I have been waiting for its interesting to see the burn zone and snow levels. Thanks for sharing
lightweight, cheap, strong... pick 2
Top

Awesome TR! Loved the photos and the commentary. The burn zone pictures were so interesting.
Hannah

Thanks, Jake -- I'll be studying that pano of the burn area! Nice reference for summer trip planning..!

Oh, and I meant to say -- cool shot of the icefall debris sliding down the Coe! That's good glacier mechanics in action. It's surprisingly uncommon to actually witness a block of ice tumbling from one of the various icefalls on the mountain -- good capture!

Great TR and adventurous too! I like Mt Hood shot from the top, very nice. Vista Ridge trail looks good, I expected it would be filled with burned trees (it might be in a few years from now). It feels completely different than pre-fire Vista Ridge for sure.
Top

Thanks for the great trip report. The pictures are great. It's both sad to see the loss of those tall trees along the Vista Ridge trail, but nice to see that Elk Cove and environs appear largely intact. It's going to be fascinating watching this forest regenerate.
Top

Great description of your trip.

Glad the pink flagging was helpful. My wife and I were discussing(i.e. disagreeing)the use of flagging in the wilderness. Sounds like I may have won this round.
BTW, I think I left a pair of Patagonia capilene long underwear at the Vista Ridge/Eden Park junction. If anybody
finds them I would appreciate them back! (5414904762). Thanks!!

Parkdale Hiker wrote:BTW, I think I left a pair of Patagonia capilene long underwear at the Vista Ridge/Eden Park junction. If anybody finds them I would appreciate them back! (5414904762). Thanks!!

Put a message in General Hiking topics that you lost something.

I was at the junction Friday and we did not see anything but great views! Sorry.
Some people are really fit at eighty; thankfully I still have many years to get into shape…
Top
Post Reply
9 posts • Page 1 of 1