We had other, closer in, hiking plans for the day, but the rain kept coming and we kept heading E until it finally stopped - at Deschutes River State Park. 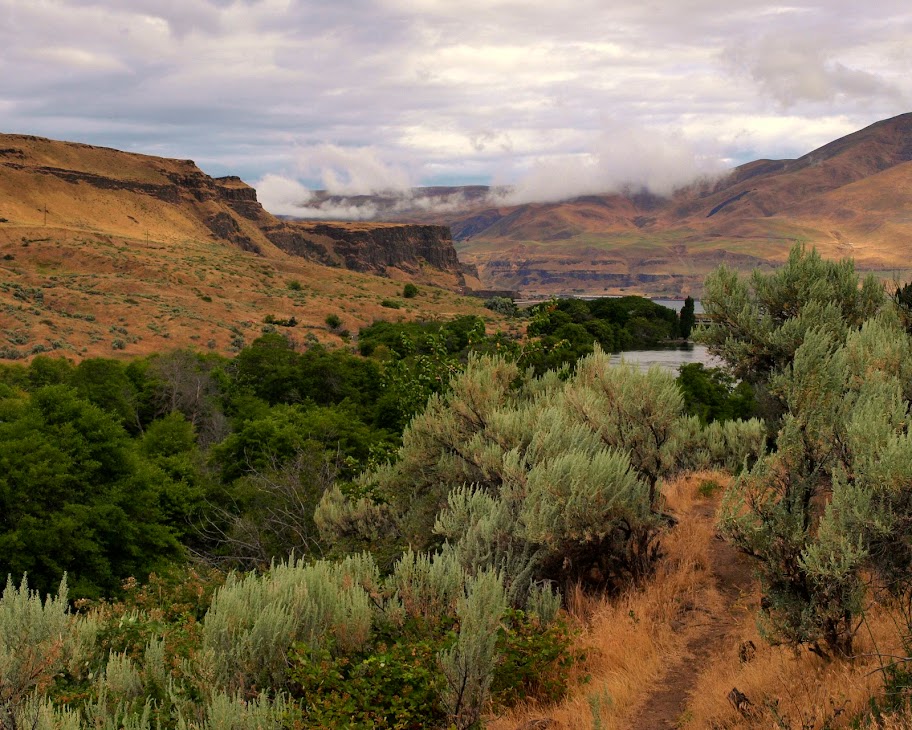 We figured we could get a little hiking done before the weather caught up with us and so we headed S along the river, enjoying the aroma of damp sage brush as we hiked, first on a trail, then along the old roadbed. 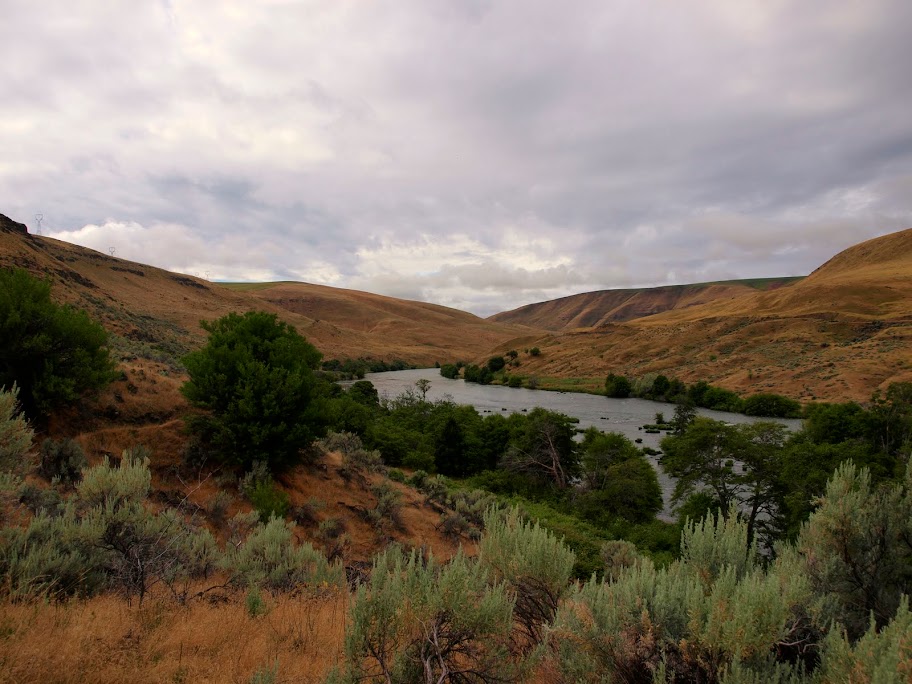 Despite the foreboding weather, there were some interesting flowers blooming beside the roadbed. 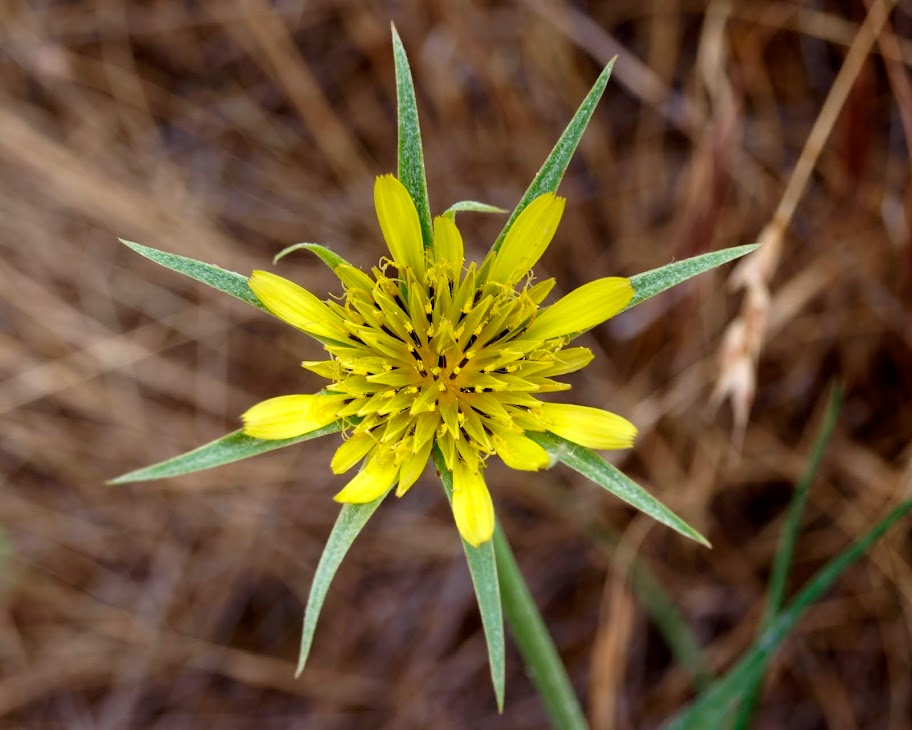 The weather kept taunting us with sucker holes and small patches of blue, but bluebird weather would prove to be a cruel joke. 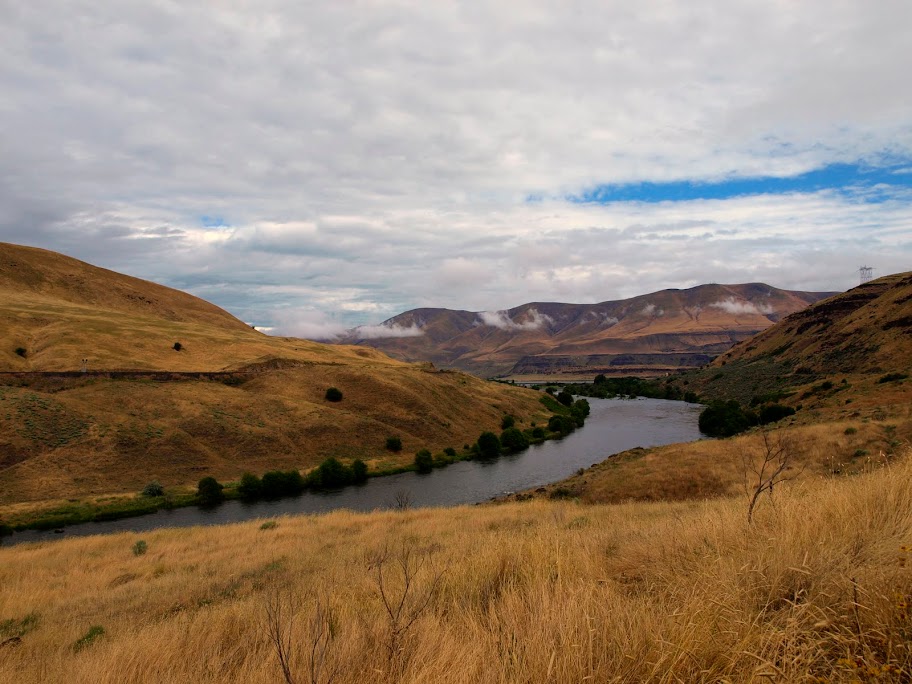 We got to where the S end of the Ferry Spring trail joins the main trail and checked out the small "arch" just off the trail, 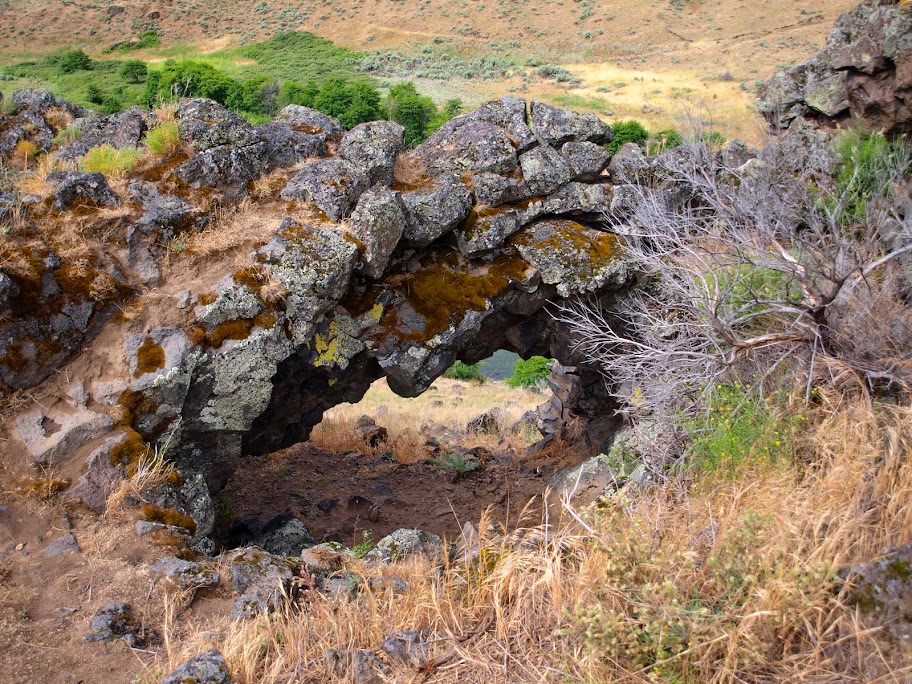 and a cool golden beetle on a pale lavender thistle flower. 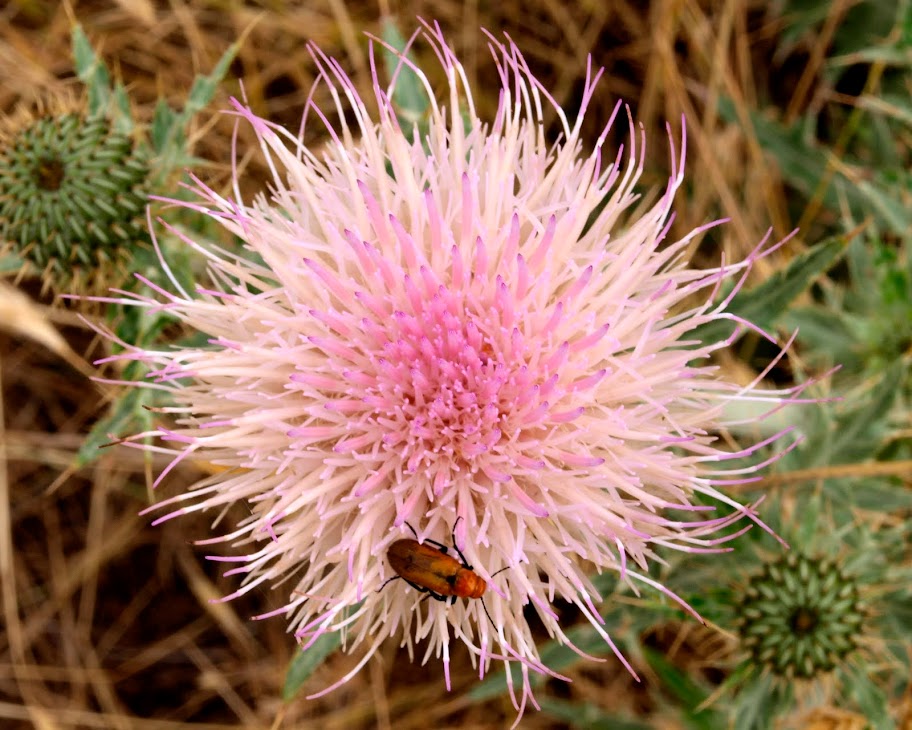 We went a little further down the trail, turned a corner, and got a good view of the weather heading toward us from the S. 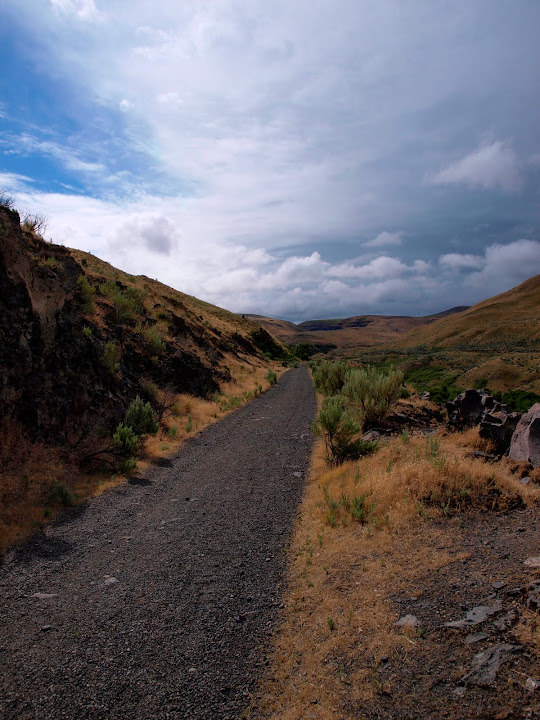 It still seemed (to me at least

) like we had time for a little more hiking, so we doubled back and headed up the trail to Ferry Spring. About 100 yds up from the main trail, the loved one experienced a moment of mutual surprise with a young skunk hiding beside the trail.

Tails were raised and things got a bit whiffy for a moment, but it seemed the skunk was running on empty for whatever reason and we were spared having to walk naked back to the TH. Even if spraying had happened, it's likely the 40 kt cross wind we were starting to experience would have simply blown the spray right back on the skunk. The skunk ran away, we ran up the trail, the wind kept howling, there was thunder in the distance, and soon it started raining. It kept that up from before Ferry Spring all the way back to the car. The loved one is smiling at this point either because we've finally reached the car or because she doesn't smell like a skunk or because the thought of beating me to death with a wet stick was making her happy. 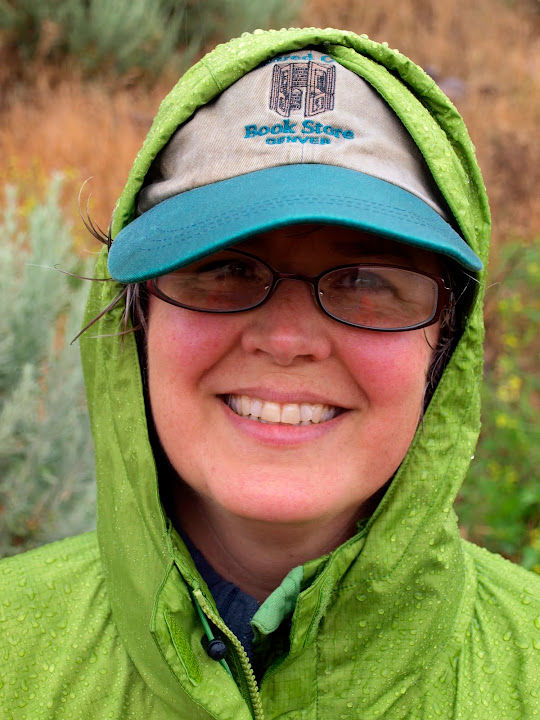 We stayed in Hood River that night and were treated to one of the more spectacular sunsets we've seen in Oregon. 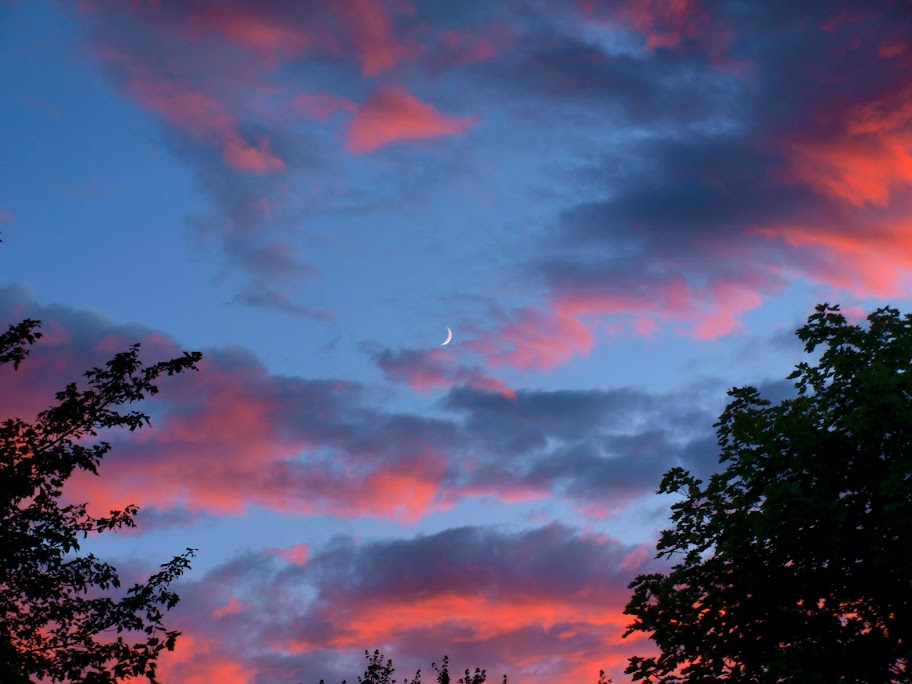 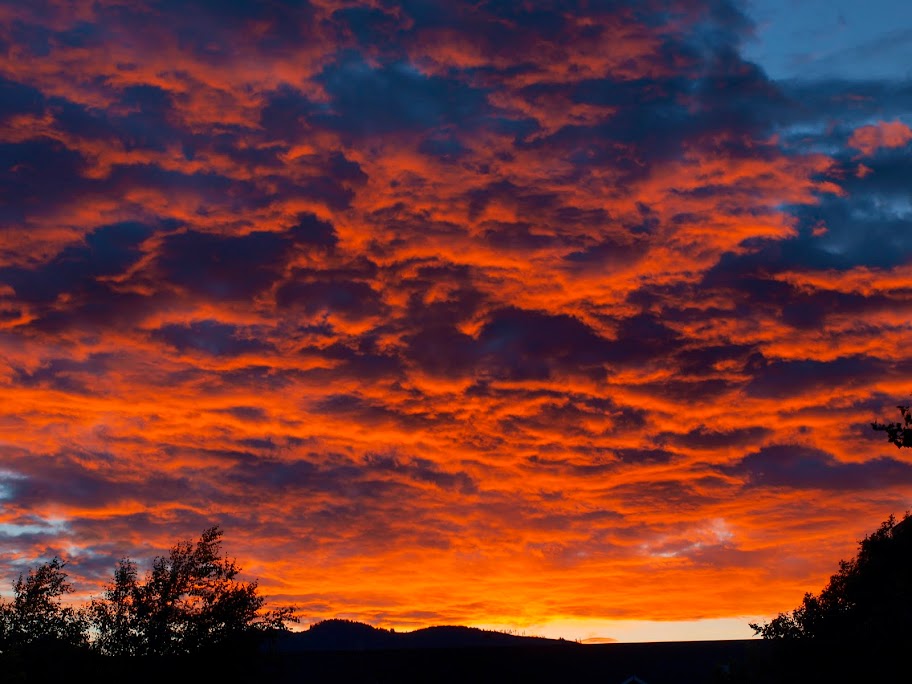 It's too bad it's such a long drive from Portland, because the lower Deschutes is usually a good place to go to avoid the rain and has a number of flower and bird species you don't see (or often see) in the Gorge proper. The loop from the parking lot out and back via Ferry Spring is only 4.8 mi and 800' gain. 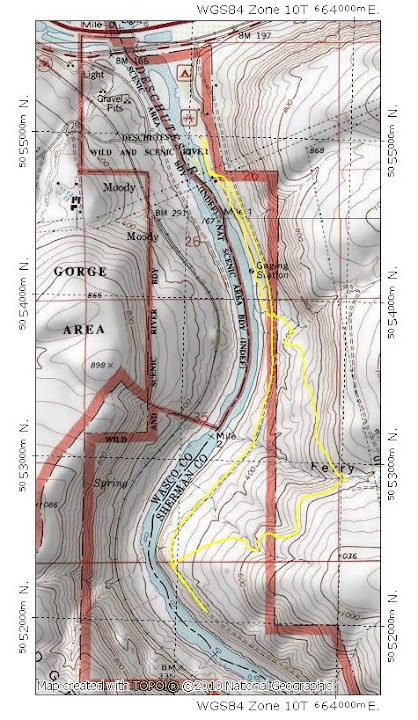 I've done that before - go East until the rain stops

If you look at the climate map http://www.wrh.noaa.gov/images/pqr/prec_OR.gif

The Dalles is right after it goes to 10 to 15 inches per year.

South of that a ways is an area of under 10 inches that includes Madras, Warm Springs, and The Deschutes River.

That's the most likely area to not be raining.

Hood River is 20 to 30 inches - better than here but not by that much.
Top

I really like those pictures. So rich and full of colors and textures. Thanks!
http://spitnvinegar.blogspot.com/
Top

That's odd?? A skunk in the high desert? You guys were lucky!
http://backcountryhunters.org
Top

Good report...glad the storm got you instead of the skunk!!

I've been doing quite a bit of research about the 1860's bridge crossings of the Deschutes, so I thought I'd toss this pic in here, since it's applicable. This is the Moody toll-bridge, spanning the Deschutes smack in the middle of the present-day campground. This bridge was the first bridge, "replacing" the river-delta ford/ferry the Oregon Trail pioneers navigated where the Deschutes entered the Columbia (most crossed in the low-water autumn time). The Moody bridge was largely in response to the Canyon City gold rush of 1862. Supposedly there were up to 150 people leaving the Dalles per day for the distant gold fields during the height of the Rush. The Dalles only had a population of about 500 in the early 1860s----that's aa hell of a lot of passers-thru!!
After crossing the bridge, the Canyon City bound folk then climbed the wagon road that makes up the northern part of the Ferry Springs upper loop, as the state park signage on the trail indicates. If you look closely on GoogEarth you can still see the footprint of this wagon road heading up to Ferry Springs.

Upstream there were other crossings also on toll-bridges---3 miles upriver was the Gordon Ranch bridge (at the nowadays camp area with a clearing that held the 700-tree Gordon orchard). Then, 4 miles further upstream was the "freebridge", built by the county (involving a tangled history with the Dalles Military Road Company). The remains of the fallen-down Freebridge are still in the river, at the base of the Kloan/Freebridge road that descends dowwn from the west rim of the canyon. Finally, 40-or-so miles further upstream you had/have Sherars Bridge....which became the most depenable and best-maintained route for the 1860's gold-seekers, featuring the "easiest" descent and ascent of the formidable Deschutes Canyon. Amazingly, the Sherars wagon road still exists on the east wall of the Deschutes angling up and SE from the bridge site. I walked most of it just a few weeks back...and not only is the still-intact road super impressive, but I also stumbled upon a volleyball-sized glacial erratic on the side of the road the I GoogEarth estimate at 910 feet of elevation. Wow!!
Honestly, in the pastthe Deschutes Canyon kind of bored me...but now I find all the history ever-more intriguing and a wonderful addition to some springtime dry-side hike/adventuring.

Oh, here's the pix...I almost forgot..., with one of Freebridge to boot, courtesy of the Wasco Pioneer Assoc. The Moody bridge one is from the Discovery Center's online archive (oh, another addition is that Freebridge was found vandalized in 1912, not 1920 as the pic says. Best guess was the vanddalism had to do with the Deschutes railroad war).
I LOVE talking about Gorge history, so if you have comments or questions, fire away and we'll try to untangle the gorge-history tangles! cheers, scott