In the last 15 years, I've only hiked up Silver Star once when it wasn't otherwise covered with snow. It's a lot of fun with snow, and usually much less crowded, but I thought it was about time to try it again snow-free. I also wanted to link my favorite S ridge route (Tr 180) with the Tarbell Tr to make a loop. Since it was going to be the requisite bluebird day for hiking, I was a little concerned about how crowded it would be. Shortly after I reached the GV TH, three other cars roared in and disgorged a flock of hikers and dogs. But, except for about a dozen or so folks on or near the summit, these were the only "crowds" I saw all day. The big decision was whether to start at Grouse Vista and hike down to the gravel pile where Tr 180 starts or park there and walk down the road in the afternoon. I (wisely in retrospect) opted for Grouse Vista and down the road in the cool of the morning. Parking at GV also allowed a bit more amortization of my Discovery Pass (although it's doubtful anyone came up to check?). There's one spot on the way down Rd 1200 to the lower TH where Hood is in full view. 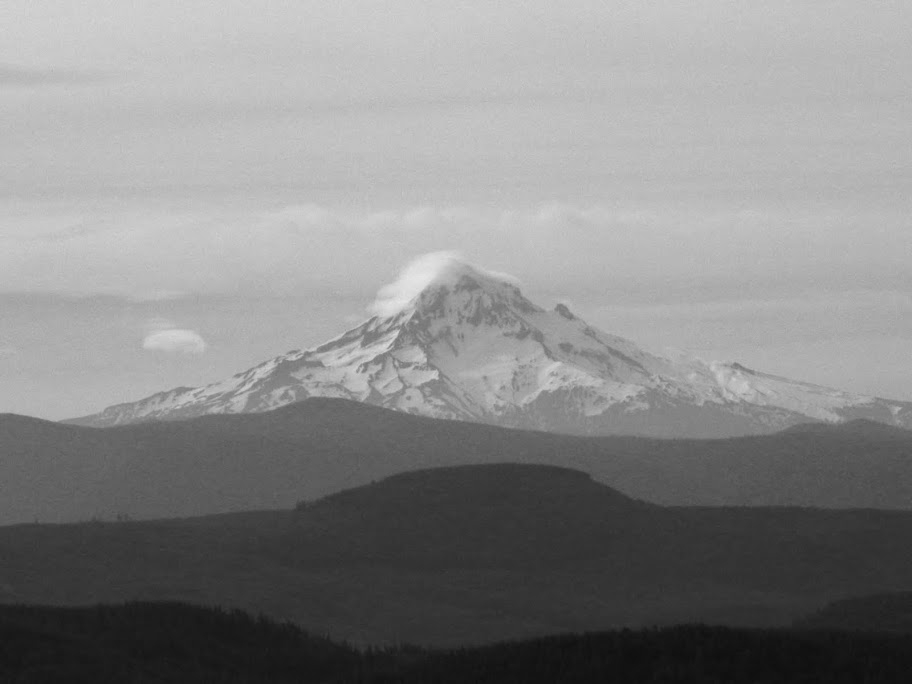 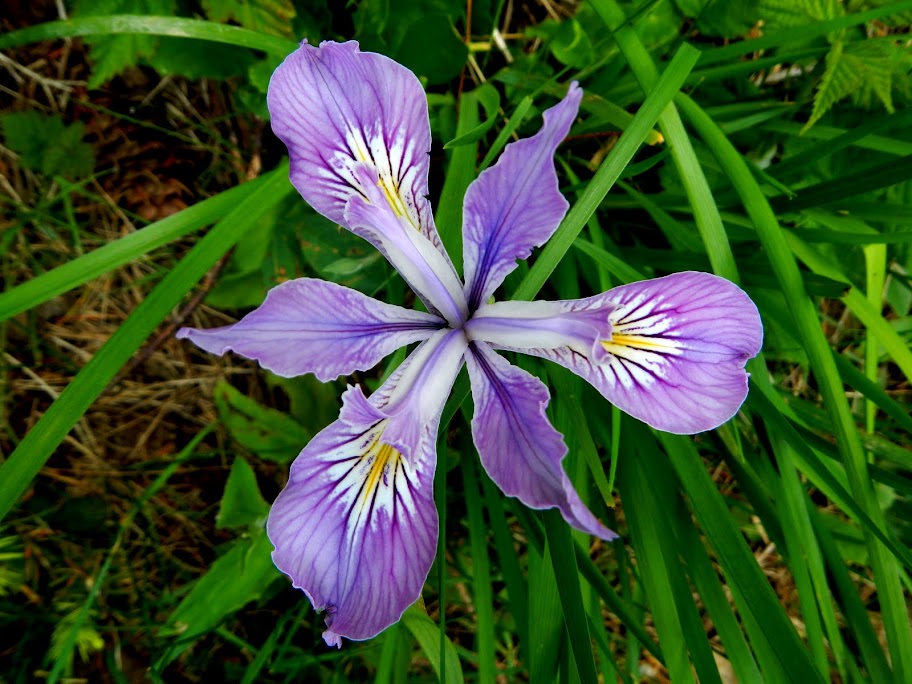 while higher up, Indian Paintbrush was out. 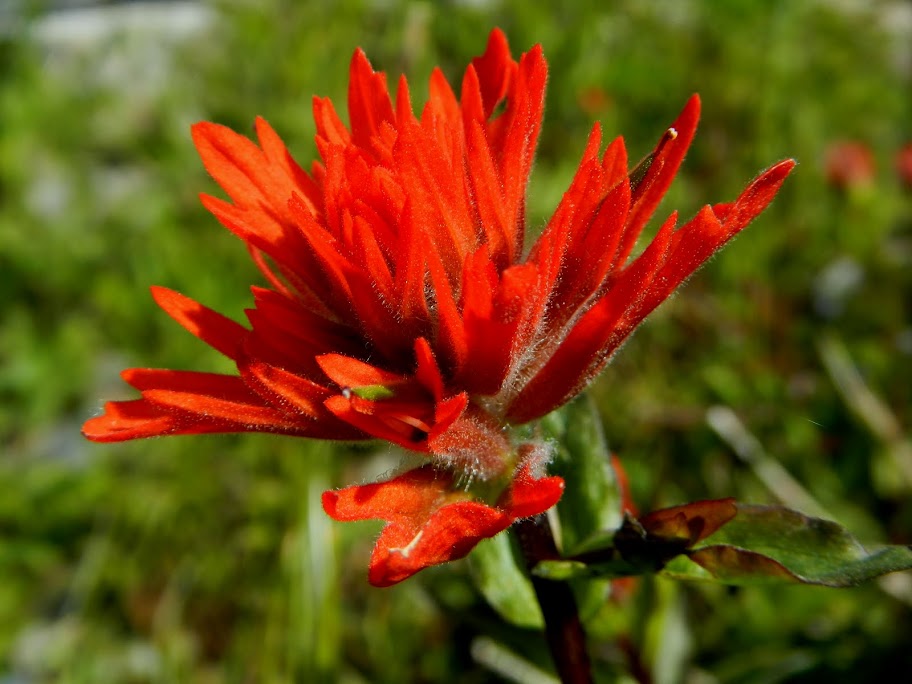 My favorite spot on Tr 180 is where it emerges from the trees and turns the corner, at about 3000', into the basin below the peak with the Indian pits. In the winter, this is where the really fun, wide open, big view snowshoeing usually starts. 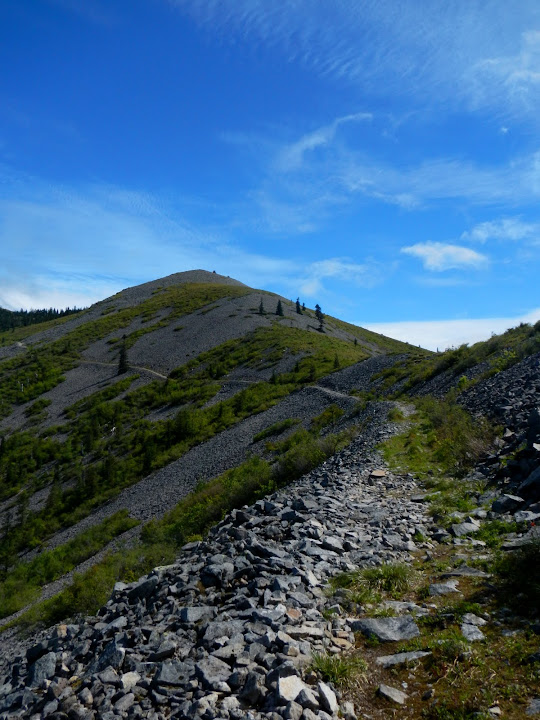 From here, I headed XC up the ridge to join Tr 180E near the pits. From where it crests the peak, there's a great view of Silver Star itself, with St. Helens in the distance. 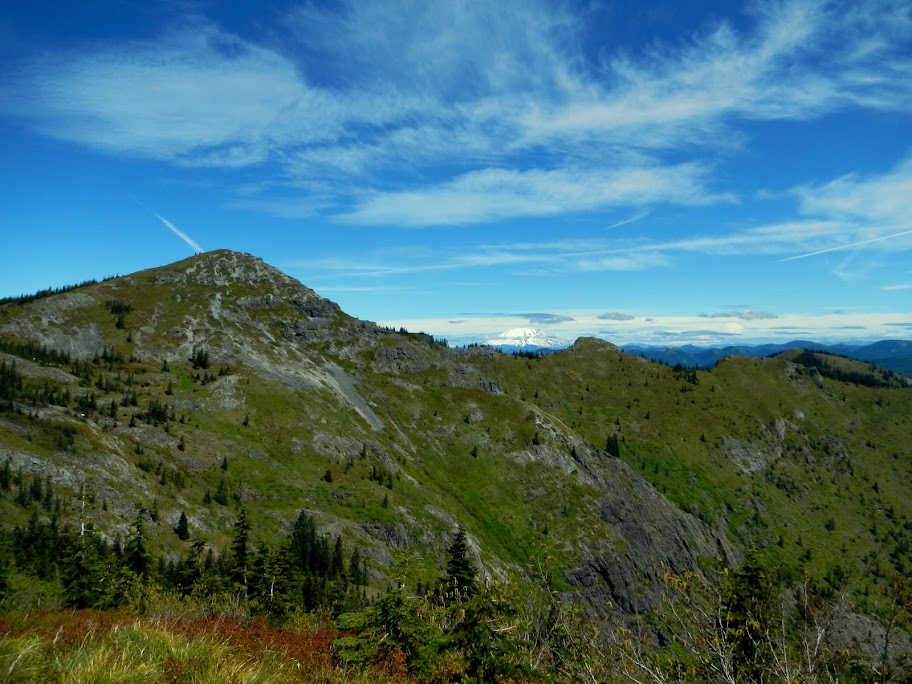 There were only a half dozen folks on the summit when I got there - which seemed like a surprisingly limited turnout for such a nice day with big views. Both Hood and Jefferson were visible, amid an intricate display of clouds and contrails, 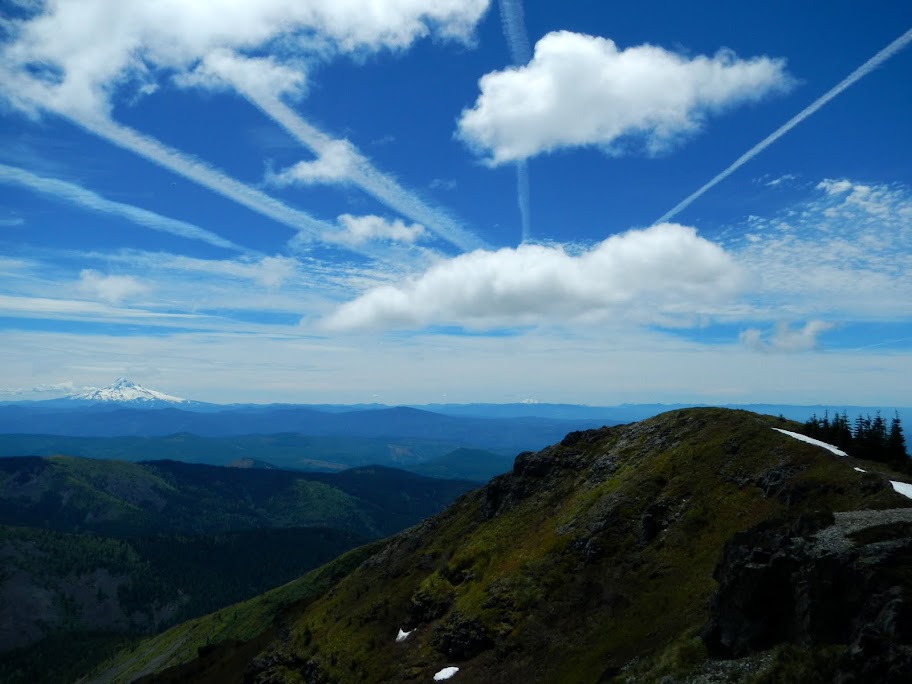 as was St. Helens. 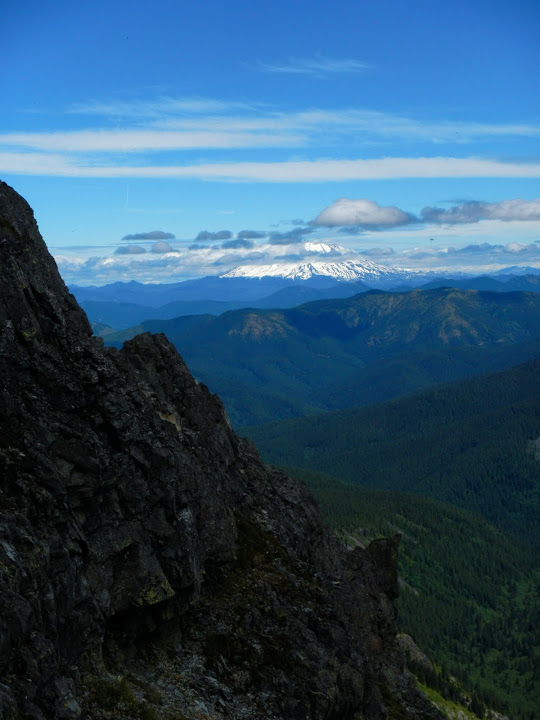 There were a lot of pesky, but fortunately non-biting, bugs on the summit, so, after a quick lunch, I headed down toward the Tarbell Tr. Just below the summit, I ran into another half dozen or so folks on their way to the top, but these were the last people I saw once I turned down the Sturgeon Rock Tr (180C). The plan was to climb Sturgeon Rock; the problem being that the Forest Service trail map labels Pt 4183 (just W of Silver Star) as "Sturgeon Rock", while the USGS topo map labels a lump to the W of the Tarbell Tr junction with Tr 180C as that feature. I opted for Pt 4183, figuring I could always come back and climb the "real" Sturgeon Rock once Don told me which one was which! From the top of Pt 4183 (or Sturgeon Rock or a sterling example of bureaucratic confusion), there was another view of Silver Star, 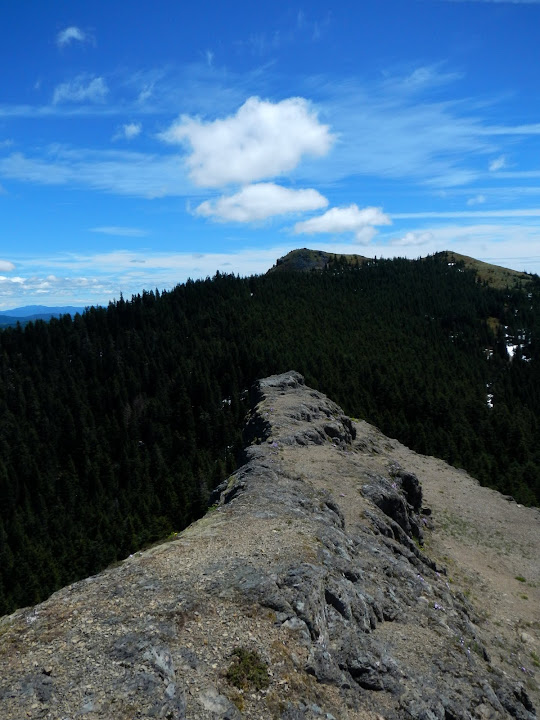 and of Silver Star and Hood, 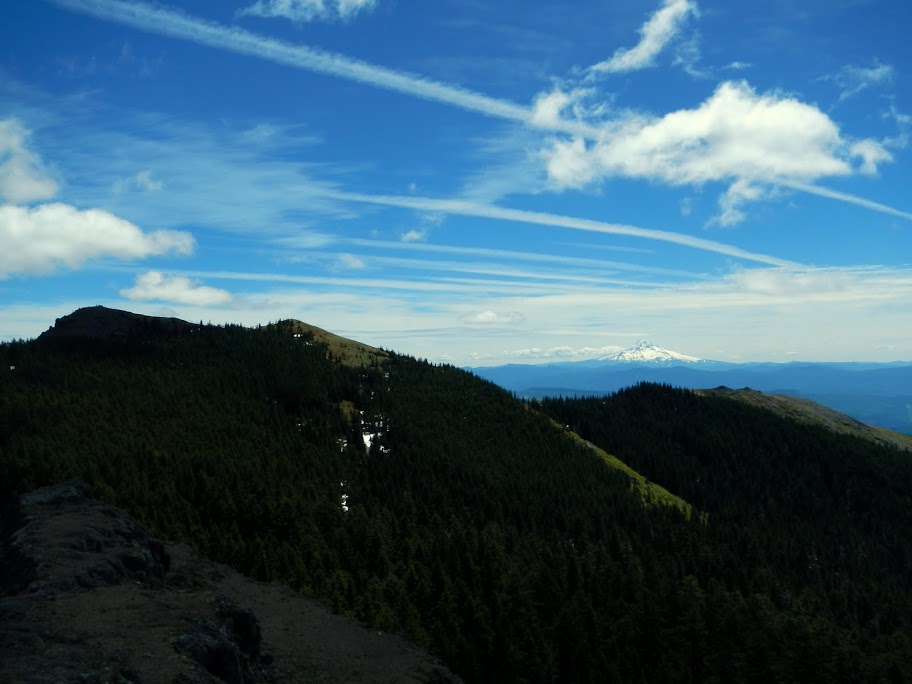 Putting my Nikon AW100 to the test, I telephotoed the "crowds" on Silver Star's summit. Not too bad for a small, watertight, ruggedized camera. 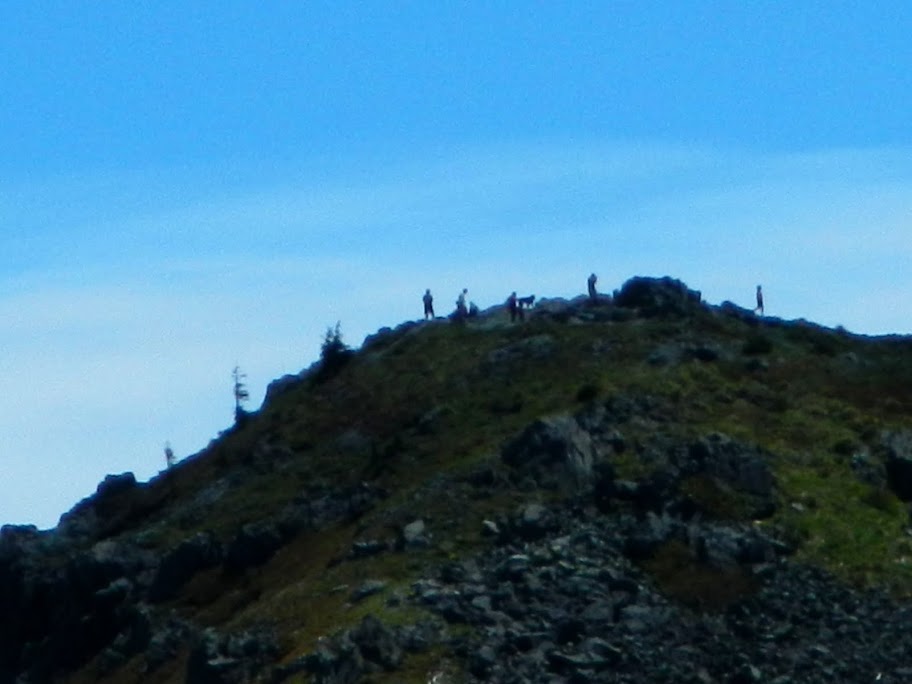 Then it was further down Tr 180C to the Tarbell Tr and along that to the Grouse Vista TH. The Tarbell is a very good, well maintained trail that crosses Rock Creek 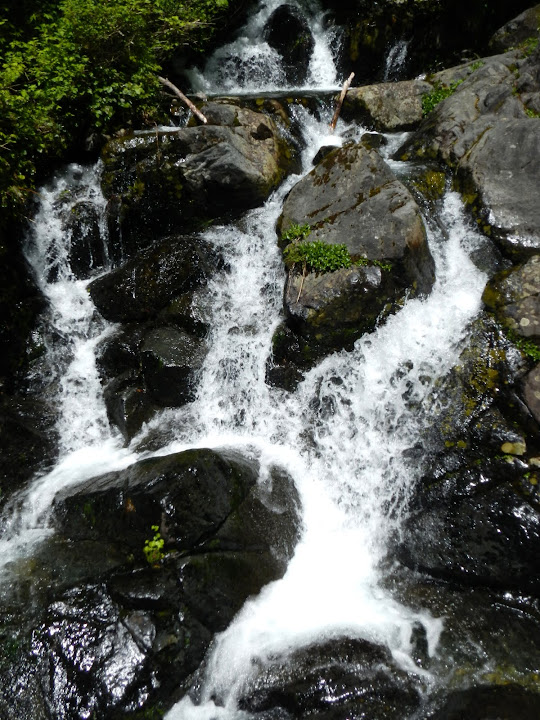 on an impressively hefty new(ish) bridge - which overweight mountain bikers should be able to cross with hardly a care. 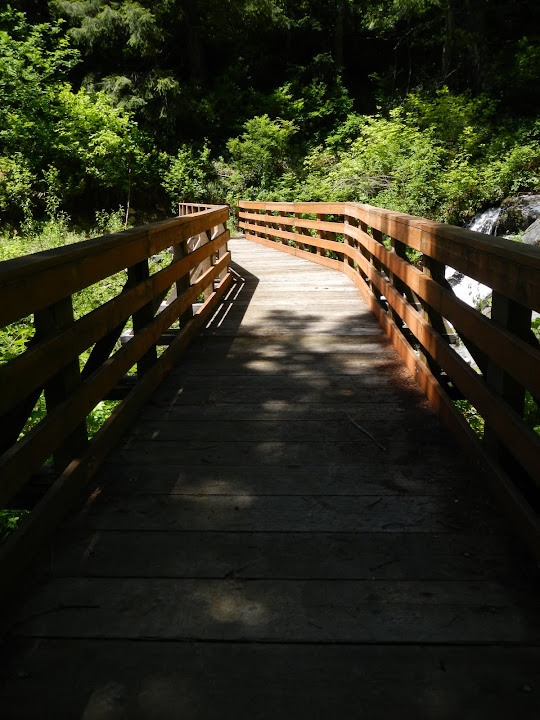 The Tarbell Tr includes a couple of viewpoint signs which seem intent on identifying Pt 3577 as "Pyramid Rock", even though the USGS map has the round hill SW of Pt 3577 labeled as such. Is this the Bermuda Triangle of map making or what? 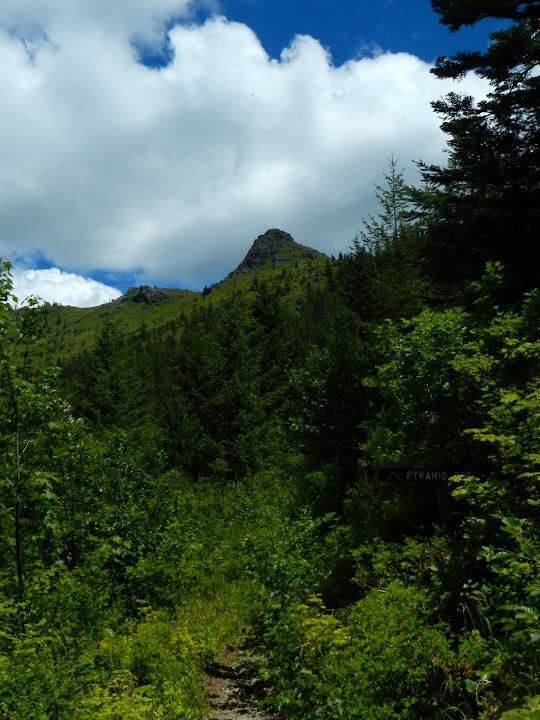 I encountered no one or Tr 180C or the Tarbell, but got back to the GV TH to find in full of cars. I'm guessing it was a busy day on that straight shot to the summit - the GV trail (180F)? It was hot and a bit muggy (but no complaints

) when I got back, so not having to hike down to my car was a definite plus. Except for the 3 mi road section, this is a wonderful, not too strenuous hike that includes forests, summits, (small) waterfalls, (big) views, and has always proven to be uncrowded. 12.2 mi, 3200' EG. 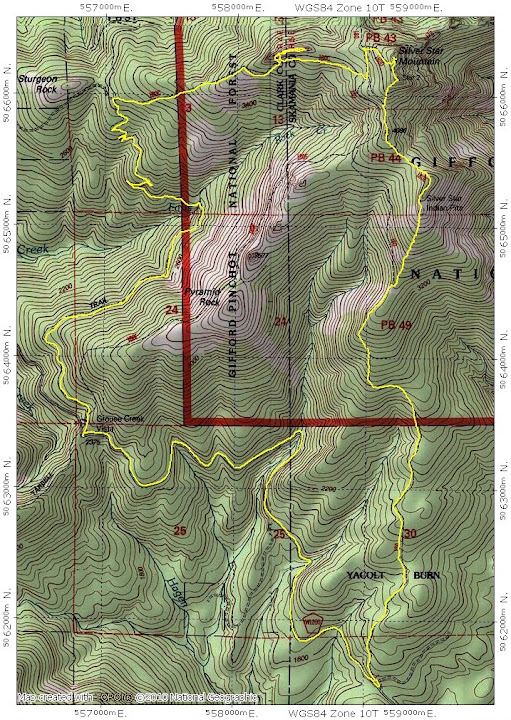 I like going cross country on that ridge, maybe even starting at the "B" in "Yacolt Burn" on the map or maybe it's 1/2 mile North of there. There's a jeep road that goes up to the ridge. Then you can either go cross country or find other jeep roads.
Top

Excellent report, and your bluebird weekends are definitely here.

Lots of great views up there!
Jim's Hikes

Awesome VM, you created a nice clear sunny day for us on Tanner Butte by hiking
on the same day we did! Thanks again! And nice TR/pics too

Eric Peterson wrote:Awesome VM, you created a nice clear sunny day for us on Tanner Butte by hiking
on the same day we did! Thanks again! And nice TR/pics too

I do what I can weather-wise. Saw your TR for the Tanner Butte hike - great one! Looked like a strenuous hike, but getting to the TH before 6am seems like the tough part to me.
Top
Post Reply
5 posts • Page 1 of 1