I got the idea for this hike from Jack & Company’s excellent adventure last April out and back to Three Corner Rock from Table Mtn (Jack’s TCR TR). Since I’m not keen on backtracking and had done the Three Corner Rock trail last December (TCR TR), I thought why not go to TCR and just keep going? I hadn't hiked the PCT between Table and TCR before, so that would be something new - which is always good. As Sunday was scheduled to be the requisite bluebird day for hiking, I arranged with the loved one to drop me at Bonneville Hot Springs early in the morning. From there I headed up the Dick Thomas and Two Chiefs trails to the PCT. Along the Two Chiefs, I was amazed at how profuse the vegetation had become in such a short time. 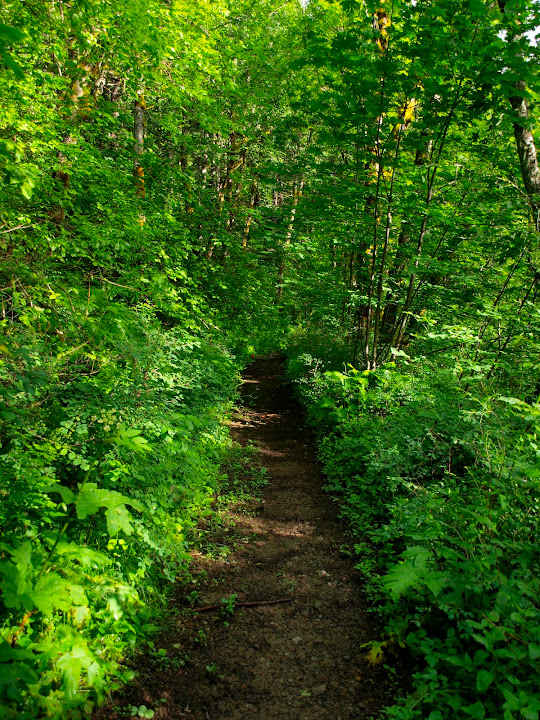 I followed the PCT N past Table Mtn and the old logging structure that sits next to the trail just before the power line crossing. 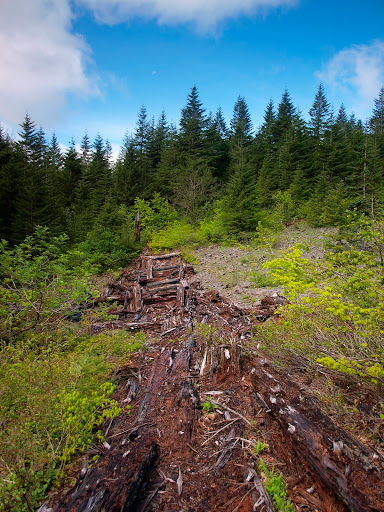 Staying on the PCT, I soon climbed up and around the lower slopes of S Birkenfeld for a distant view of Mt. Adams. 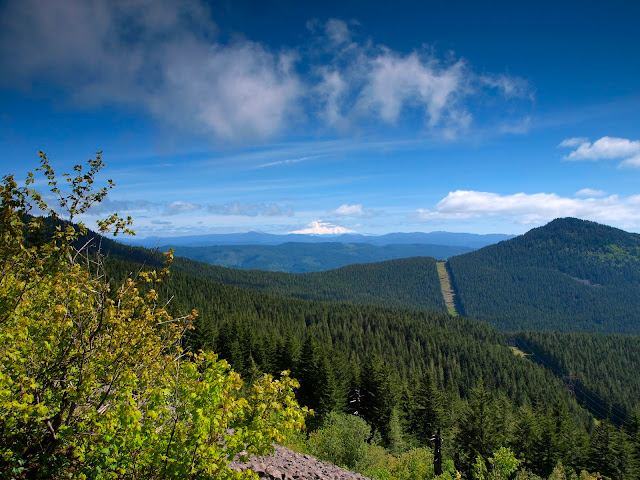 The portion of the PCT ahead of me had been buried in snow just 2 months ago, 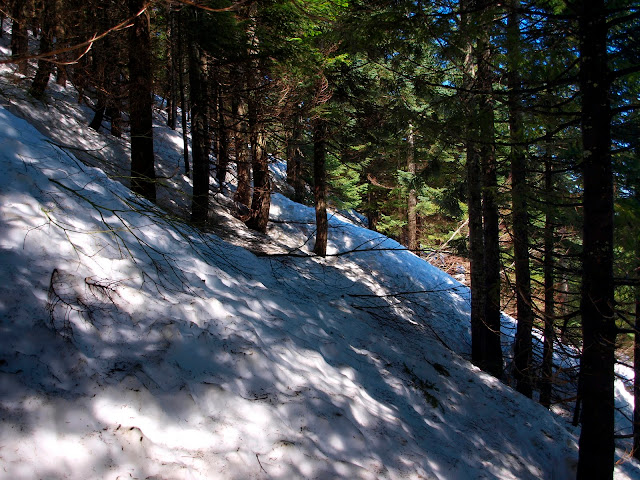 but was now completely open. 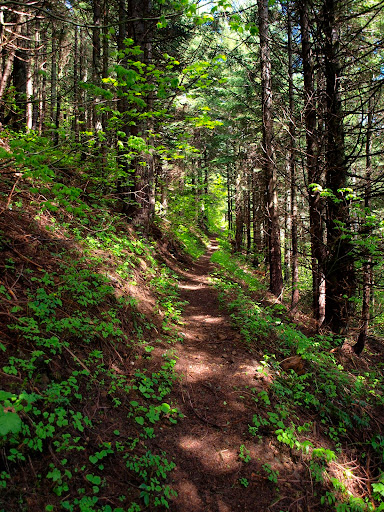 From the saddle between the Birkenfelds, I could see across to my goal in the distance - Three Corner Rock (arrow). 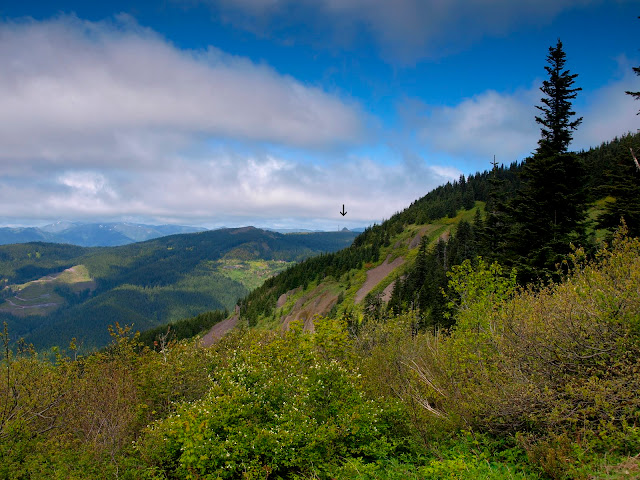 This section of the PCT was new terrain for me, as were the views to the west of Hamilton (H) and Phlox Point/Hardy Ridge (P), 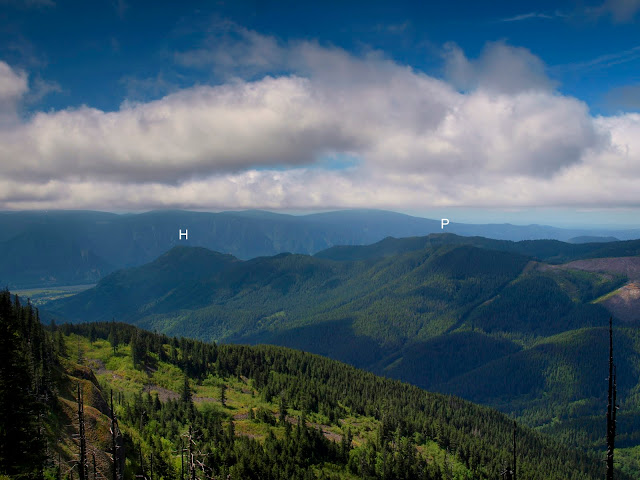 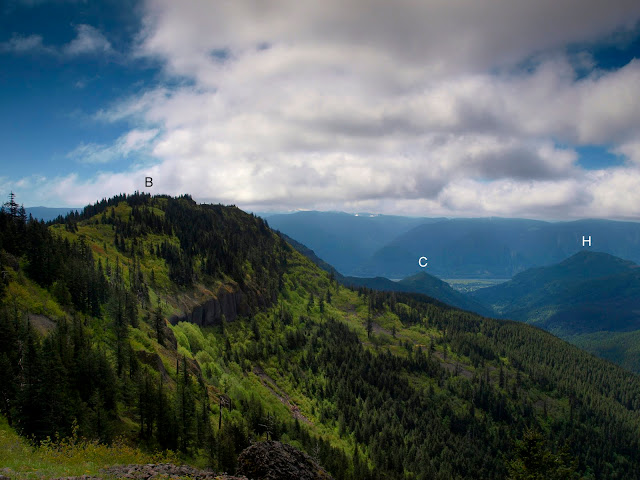 There were also numerous species of flower blooming along the trail. 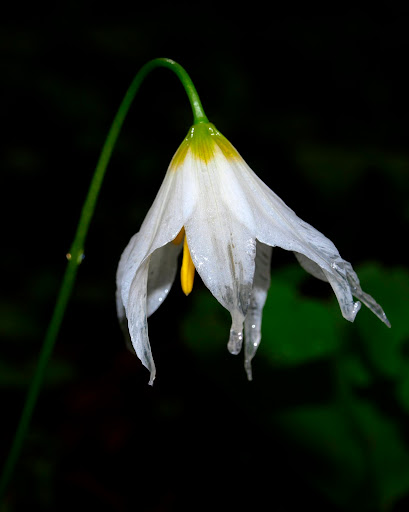 This section of the PCT runs mostly level along a ridge toward TRC - allowing for very easy and fast hiking. There is one point where the trail intersects with a major dirt road - here a hand-lettered sign said that the PCT had been temporarily diverted through a gravel quarry! But the trail was visible just across the road, so I passed on a chance to walk through a rock-strewn wasteland. After a bit more wandering along the ridge through the forest, a very obvious spur trail cut left off the PCT to TCR. From the summit, I had a view of Hood 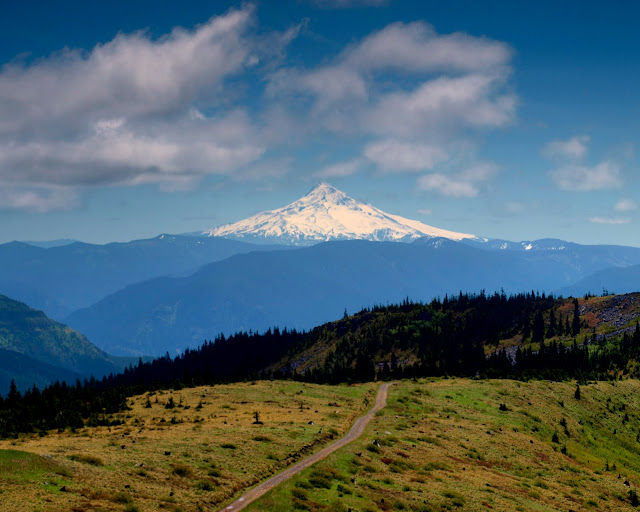 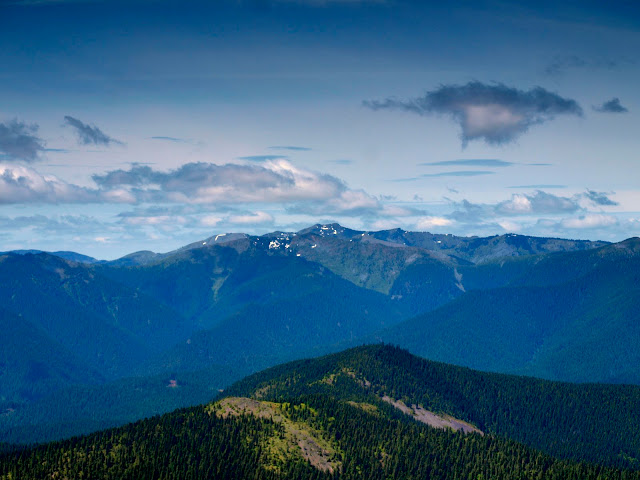 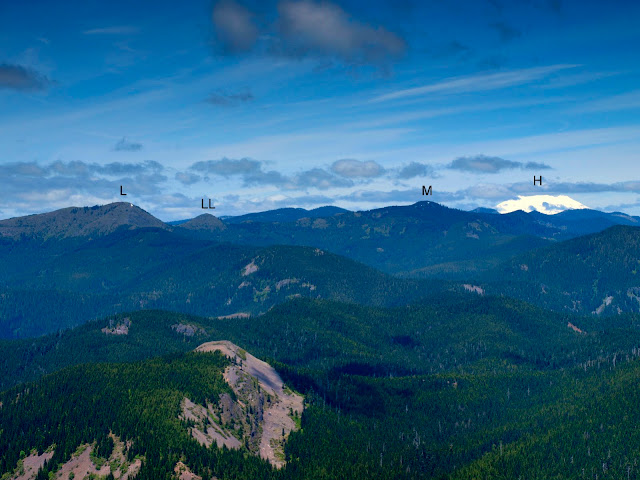 It was sunny and clear, but a little windy and thus not particularly warm, on the summit - so after a quick lunch, I took the TCR trail down toward the Washougal River. Along the way, I surprised a snake catching a snooze in a sunny spot in the trail, 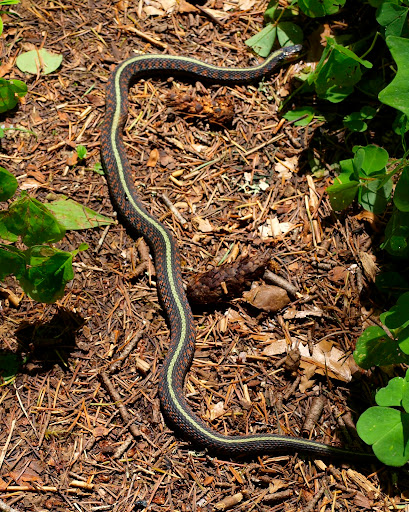 saw beargrass in full bloom (before it gets nipped off by the deer), 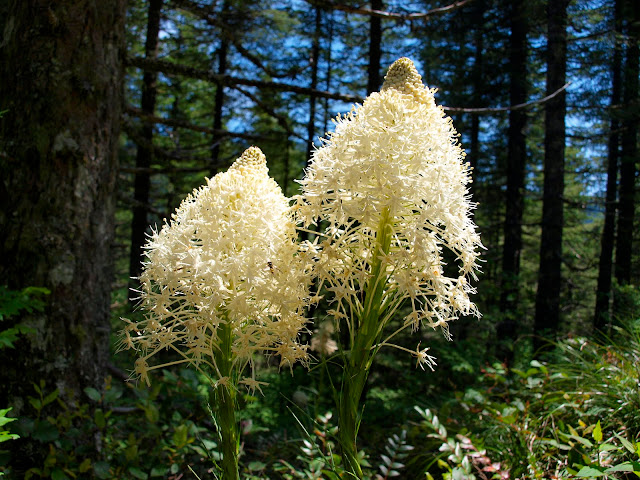 and admired a ground-dwelling dogwood in bloom. 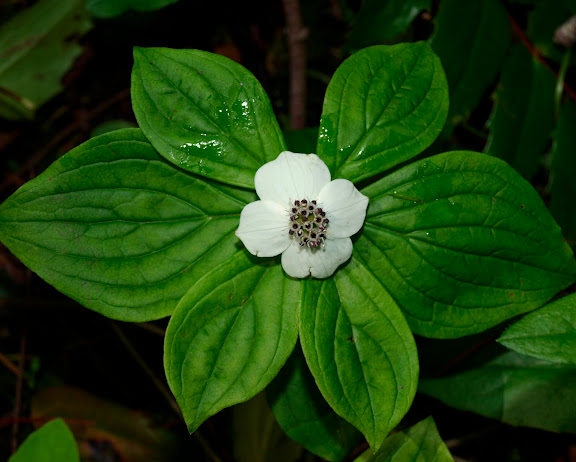 ) out of the drainage before continuing on to the river. At the top of this climb, there's a good view back to TCR. 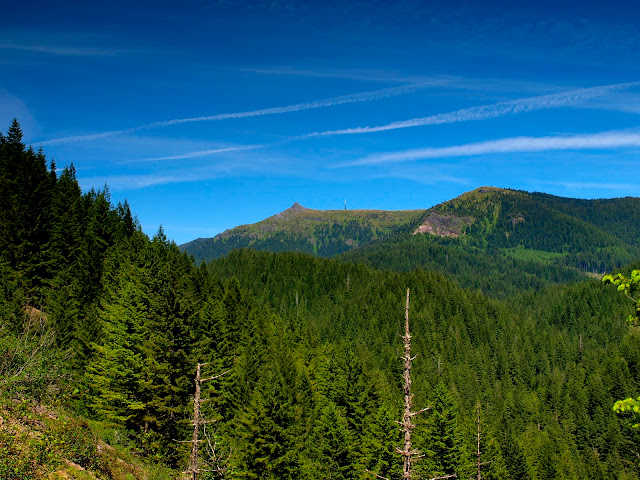 Despite the chill on the summit, the weather was otherwise near perfect for hiking. With the exception of one big downer tree about 200 yds above where the Two Chiefs trail crosses the PCT, all of these trails were clear and it good condition. I saw 4 hikers (on TRC) and 5 mtn bikers (on the TCR trail) and that was the extent of the "crowds" I had to deal with. This was possible as a one-way trip because the loved one agreed to pick me up at the TCR TH on the Washougal River Rd - thanks! 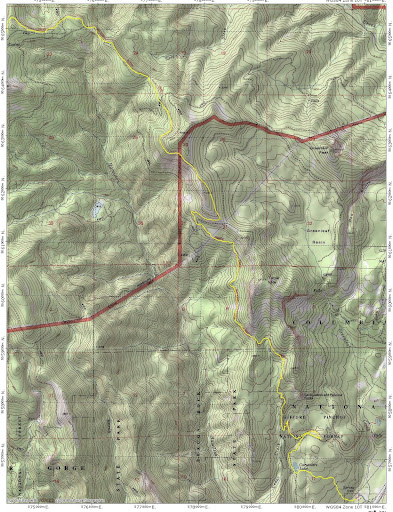 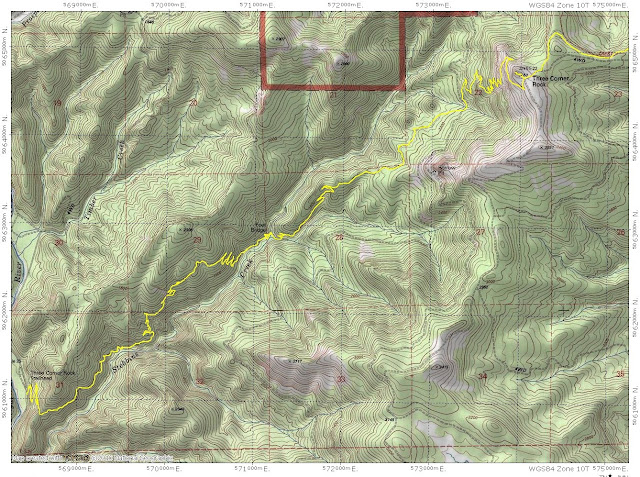 Nice hike Bruce! I had actually looked at that itinerary as a car to car hike. The length, especially if you add in a few more summits, makes it borderline Loony!
Some people are really fit at eighty; thankfully I still have many years to get into shape…
Top

Peder wrote:Nice hike Bruce! I had actually looked at that itinerary as a car to car hike. The length, especially if you add in a few more summits, makes it borderline Loony!

You could add traverses of Table & Birkenfeld to up the loony factor. Or just out & back the whole thing - what's 40 mi & 8600' EG to a loony? JoeRunner would have no problem but I wonder about mere mortals...
Top

Nice report and pics and great job doing that hike. Good to hear Stebbins is low enough to cross already. On a recent clearing trip I took a good look at that log on the PCT near the Two Chiefs trail and decided it needed professional help: It's under some tension due to the trees it is wedged against and too scary for me to cut.

VanMarmot wrote:You could add traverses of Table & Birkenfeld to up the loony factor.

Aldrich - Cedar - Table - Birkenfeld - TCR - Stebbins Creek might be an even better itinerary for a Loony!

Bruce - Your approach is smarter as you get to be chauffeured to AND from the TH by your loved one! That is not an option with the out & back tactic.

What about backpacking possibilities for those of us non-loonies? Water...campsites? Always looking for something close to Portland at lower elevations. Thanks for the report!
Top

I am not a camping expert. You can drive to the saddle between Table Mountain and Birkenfeld Mountain and start from there. You could also car camp in that area, there are some superb views and possible campsites. I may camp there with my kids this summer.

You can drive to the big saddle that can be seen just in front of Birkenfeld Mtn. Picture taken from Table Mtn, June 2011.

funhog wrote:What about backpacking possibilities for those of us non-loonies? Water...campsites? Always looking for something close to Portland at lower elevations. Thanks for the report!

There are several informal campsites beside the trail between Table & TCR - and there are several water sources in there too. There's a nice 1-person bivy on the saddle between the Birkenfelds. You could get a guide for the PCT in WA if you wanted more details.
Top
Post Reply
8 posts • Page 1 of 1