Today's excellent weather happily coincided with the first weekday I could take off [...be free little cubicle dweller, be free...] since starting my new job. I couldn't think of a better place to spend such a nice day than on the open, sunny slopes above Catherine Creek and Coyote Wall. Mine was the only car at the TH when I left, 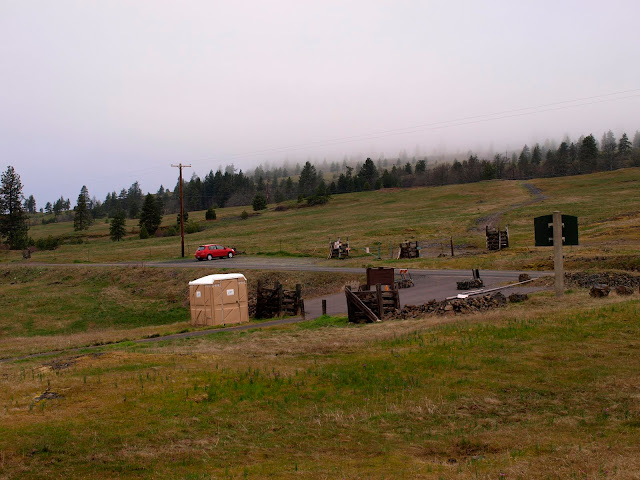 but that would change by the time I got back in the afternoon. 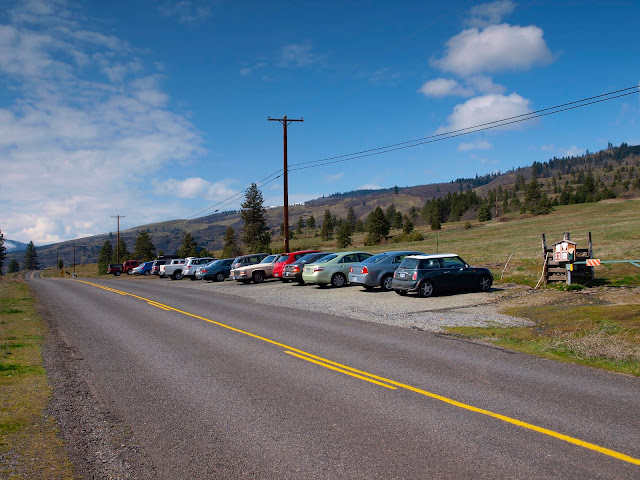 Although it looked like it was probably sunny over in The Dalles, there was a cloud deck over the TH as I headed out. 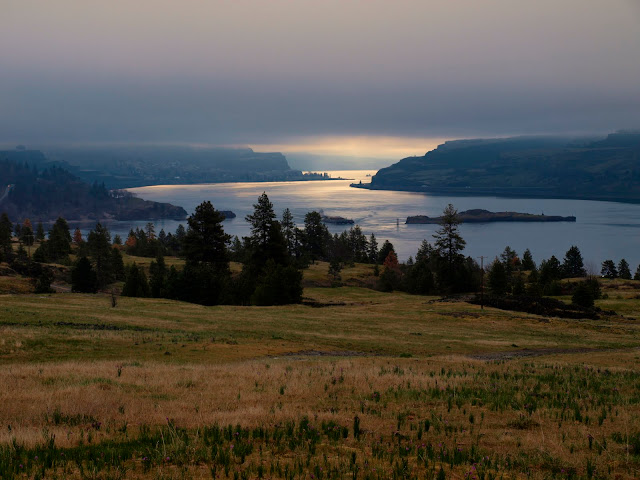 However, by the time I'd gotten up to about 1000', the clouds were starting to swirl and shift and dissipate, lending an "atmospheric" touch to the still bare trees. 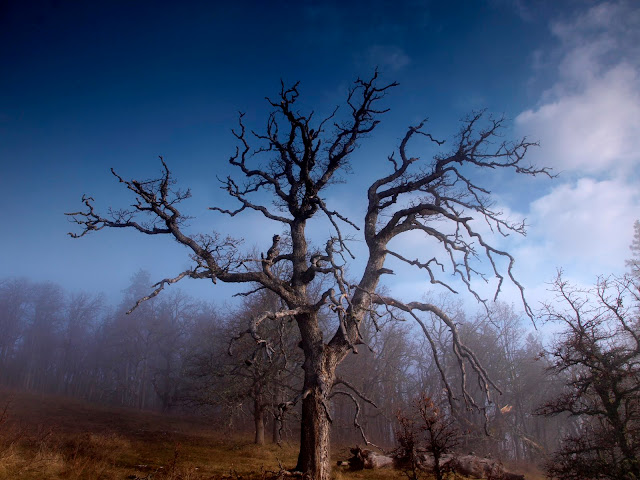 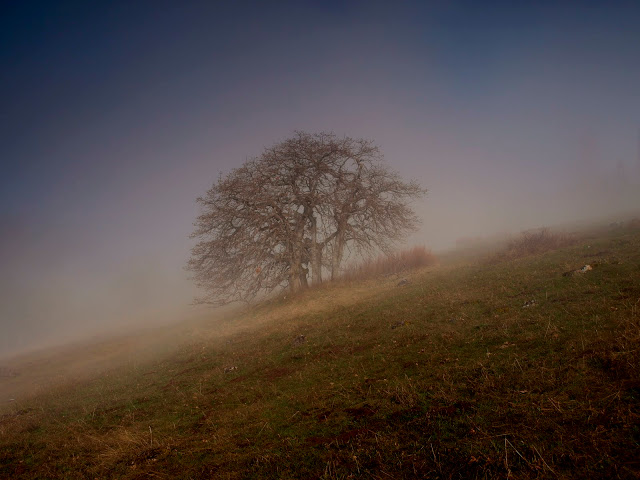 I went up and left (W) from the TH, following an old road, then some serious use trails, then going XC for a bit before reaching the old road that contours at about 1200'. By now the cloud deck was almost completely dissipated to the E, 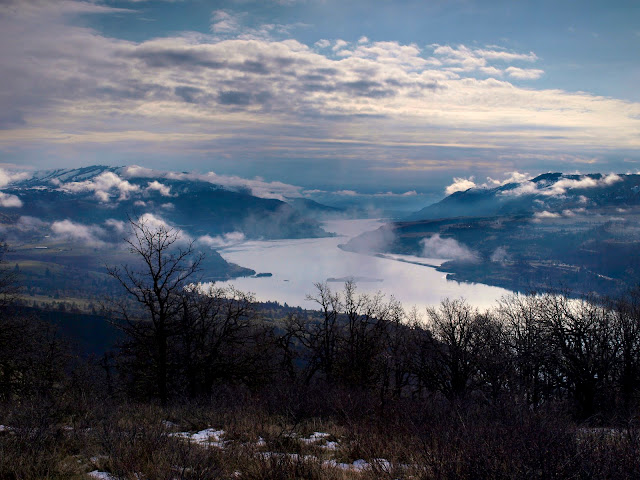 and Hood was peaking out to the SW. 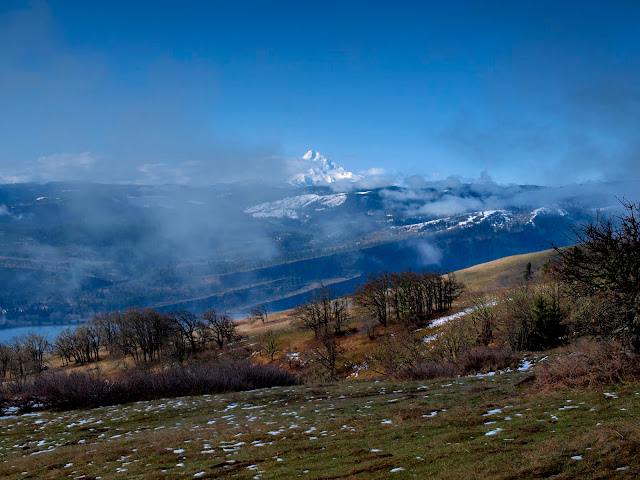 It's still a little early for most flowers - and a fresh dusting of snow wasn't helping the bloom - but the grass windows were still giving it their best. 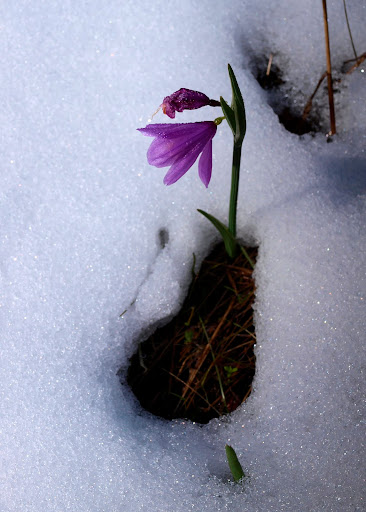 There were no "goals" for this hike other than to enjoy the sun and the view and go as slowly as possible so as not to miss either of these features (particularly the sun!). Enroute to Coyote Wall, I had a good view of Mt. Defiance to the W, 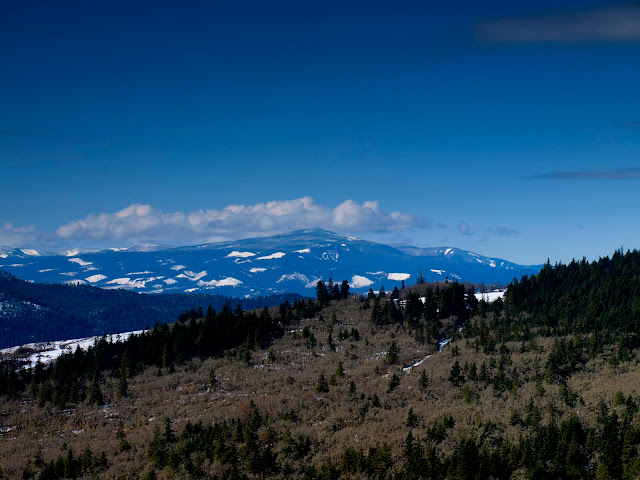 and, then from the top of the Wall, of the snowy slopes to the E. The snow is solid above 1500', but less than 6" deep and isn't destined to last long. 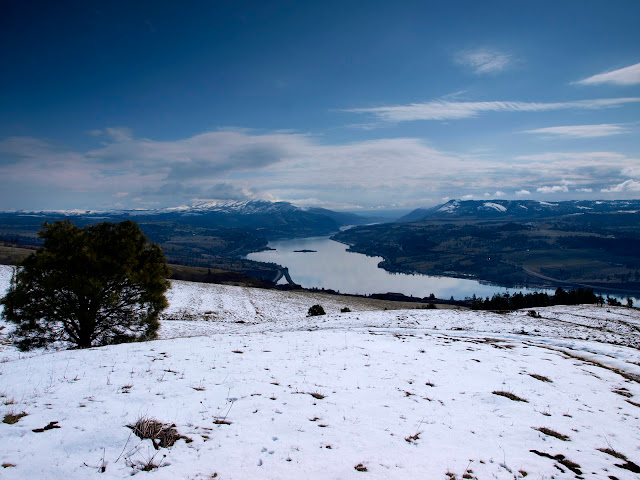 I'd crossed S of some private land just before reaching the Wall, at which point a small, friendly dog started following me. 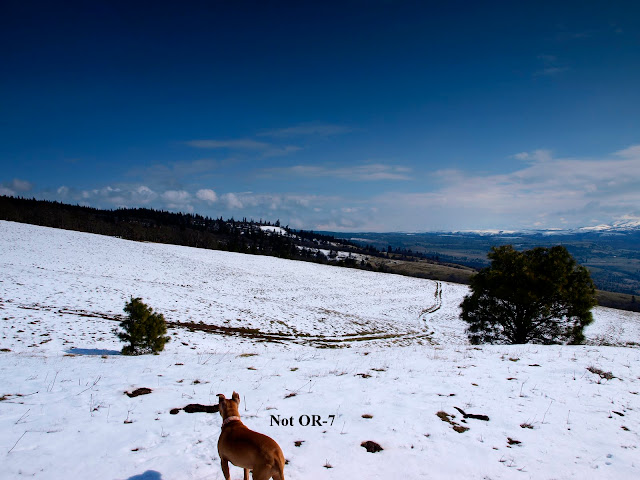 I stopped for lunch on top of the Wall, at which point it became obvious that the dog wasn't following me, but my salami sandwich! Barking ensued and I started buying her silence one little piece of sandwich at a time. Fortunately three other hikers soon hove into view - probably with even better treats - and when she took off after them, I made my escape. The walk back along the 1200' contour and then down the old road along Catherine Creek was under blue and sunny skies. 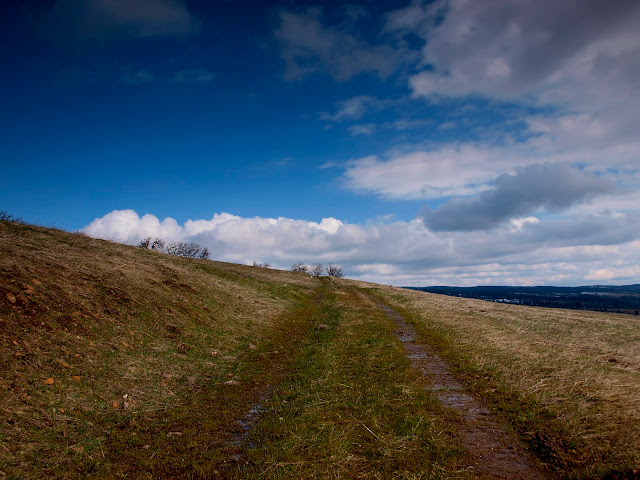 Despite the cars waiting for me at the TH, I only saw five people (and one hungry dog) all day. I'm not a flower person but my guess is that it may be 2-3 weeks before full bloom, particularly up around 1600' or so, where there's still snow and the ground isn't warm yet. This was just a great little (7.9 mi, 1500' EG) hike on a very welcome bluebird day in the Gorge. 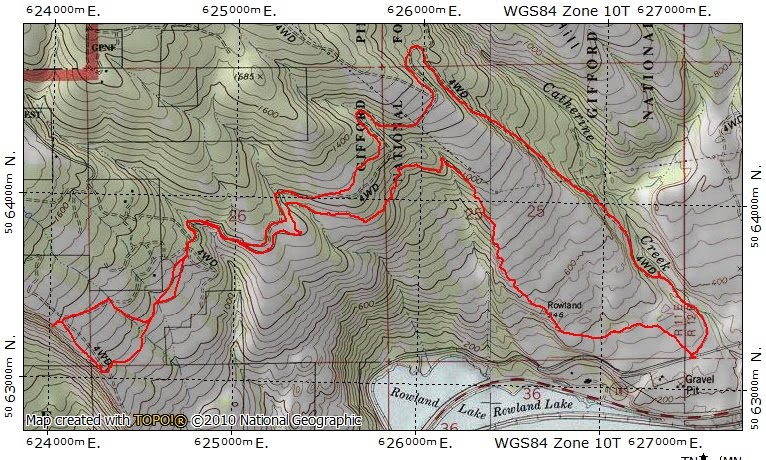 Bruce - Yes, wonderful photos! It is amazing how many loop possibilities are possible in that area. I am glad to see that you have already been promoted to the uber-cubicle, so that you can get the odd weekday off with good weather.
Some people are really fit at eighty; thankfully I still have many years to get into shape…
Top

Great photos Van! I especially like the view with low clouds to the east.

When I hiked with my parents there last year, we were followed by this same dog - it still looked like a grown puppy. After a mile or so we called its owners phone number on his/her tag and said their dog is lost, on which they said the fellow is not lost - s/he is living just uphill. They asked to say the dog "go home", and it worked right away

romann wrote:Great photos Van! I especially like the view with low clouds to the east.

When I hiked with my parents there last year, we were followed by this same dog - it still looked like a grown puppy. After a mile or so we called its owners phone number on his/her tag and said their dog is lost, on which they said the fellow is not lost - s/he is living just uphill. They asked to say the dog "go home", and it worked right away

Thanks, Romann, for the advice. You've done a service for all of the folks who will probably be going out to Catherine Ck in the weeks ahead. "Go home" undoubtedly works much better than "You want another piece of salami?"
Top

That same dog followed me last year; pretty funny! I was out at Catherine Creek today; the weather was great and most of the snow was gone. A wonderful outing per usual!
~ Joan
Top

Some really great pics. I love the view down the gorge with the puffy clouds and spots of snow.
"When we try to pick out anything by itself, we find it hitched to everything else in the Universe." - John Muir
Top

The pooch with the mooch is named "Mitzi" and greets many hikers along that trail. She'll follow you for miles once you give her a treat from your backpack, and don't worry she's not lost, she's knows those hills better than any of us!