Finally, a bluebird day coincided with my new weekend schedule! I needed a strong -but not insanely so - hike to banish the lethargy that had built up over the last two weekends while I sat on the sofa and gazed forlornly at my unused hiking boots

. A loop of Ruckel Ridge came to mind as a good way to ease back on the trail. I hadn't seen any TR about conditions on the ridge or on the creek trail (Tr 405), so I went hoping that the lower part of the 405 wasn't a mass of fallen trees (it wasn't). The drive to the TR was in fog, which stuck around until about the 1000' level on the ridge. 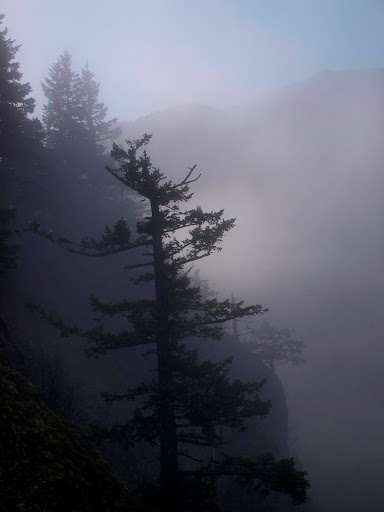 The fog was being pushed W while I was climbing above it, so by the 1600' level, I could see it - with Hamilton Mtn in the background - pulling back out of the Eagle Creek drainage. 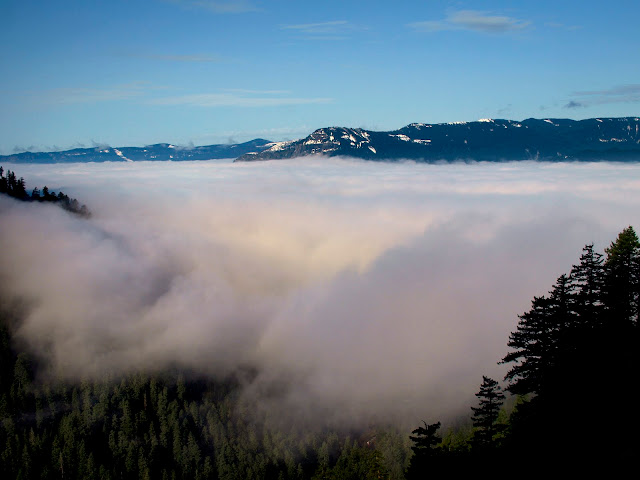 The ridge "trail" was in good condition - no blowdowns - and free of snow until about 2500'. 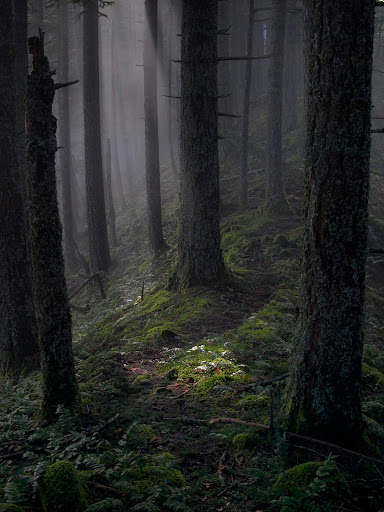 Past the "Catwalk" (covered with just enough wet, slippery snow to make crossing it quite a thrill), the snow cover began in earnest - but probably never more than 3', even up on the plateau. I didn't bring microspikes or snowshoes but didn't need them - there was no ice and the snow was shallow and firm enough to minimize postholing. 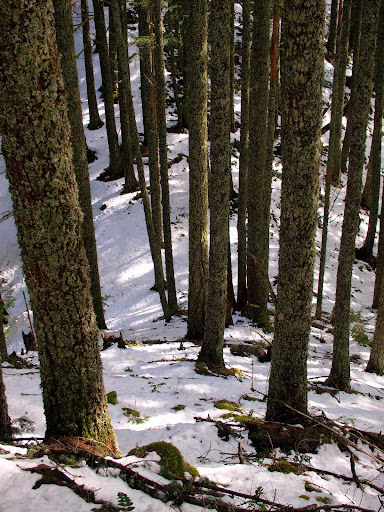 After a lunch in the sun (

) at the viewpoint, I continued on to the plateau and over to Ruckel Creek, which had a respectable amount of snow around it. 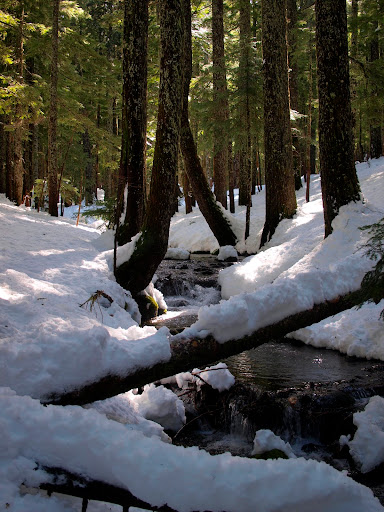 Much better than it looked in January 2011. 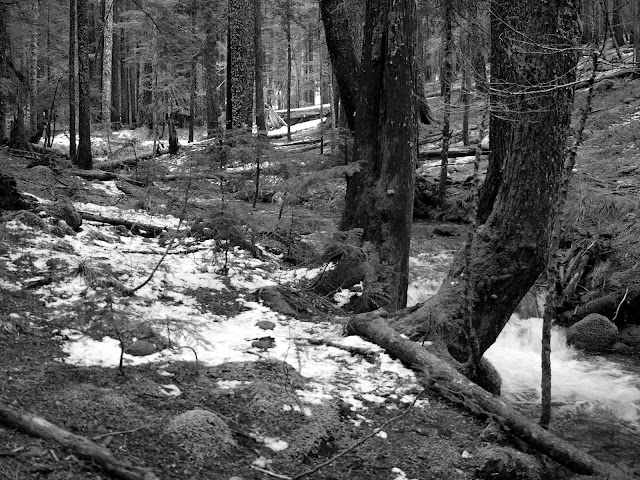 Up on the plateau the 405 trail was completely obscured by snow but by dropping down the N side of Ruckel Creek canyon, I soon came across it. From then on, the trail was covered with snow but quite evident and easy to follow. Soft, powedery, then slippery snow covered it down to the first meadow at around 2000', then started to disappear pretty rapidly after that. The meadows were snow-free, but no flowers yet. 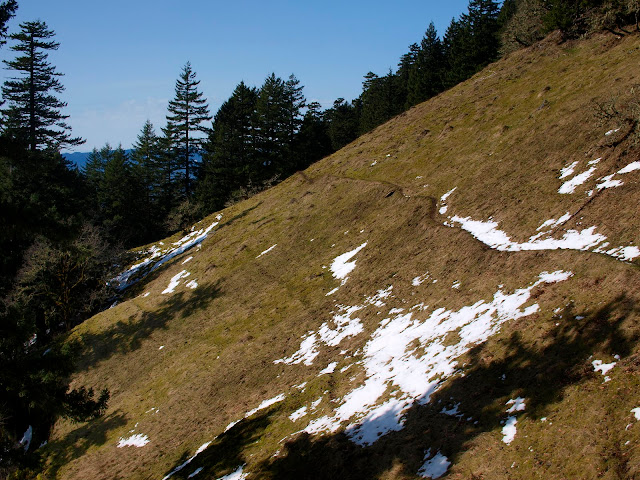 The Ruckel Creek trail isn't known for its expansive views, but there's one spot where you can get a full frontal view (left to right) of Table, Birkenfeld, and Greenleaf. 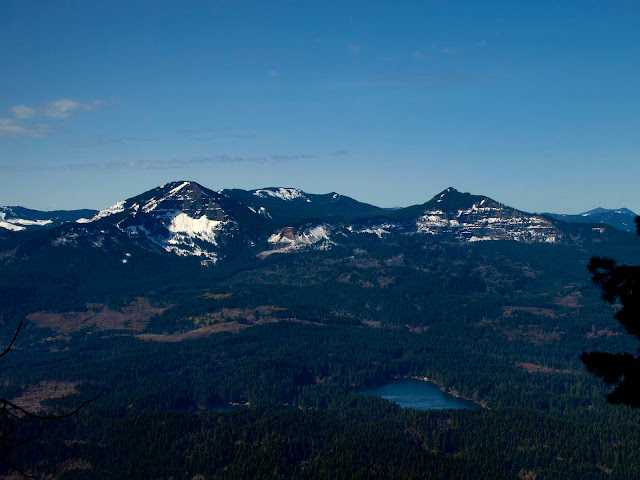 After that it was just follow the trail - good condition, just 2 minor blowdowns - back to the TH. The parking lot was near full when I got back, but I only saw 4 people on the trail and a set of tracks going down. It's a short loop (8.25 mi, 4100' EG) but it sure got rid of that lethargy! Nice! Thanks for the report and great pics. We still have some potential left for snow on our favorite hiking trails but it sure looks good at this point for an early melt-out and longer season than we've been getting these past few years. (I hope I havent jinxed it by mentioning it)

Thank you VM for reporting the actual EG for this loop!

I'm guessing your handheld GPS reported the EG you listed above?
Top

Wow, what a beautiful day! I love that pic from above the fog. Wish I had been able to make it out to play, but I was too sore following my adventures from Saturday!
Top

Don Nelsen wrote:...an early melt-out and longer season than we've been getting these past few years. (I hope I havent jinxed it by mentioning it)

Now that you mention it, they're predicting an inch on the valley floor tonight!

Thank you VM for reporting the actual EG for this loop!

The Ruckel Ridge loop has been 3700' EG since the earliest (pre-GPS) Lowe guides to the Gorge. They allowed 100' for loss enroute, so total is 3800'. My guess is that in the early days, folks just substracted TH from high point and called that the EG, largely ignoring all the little ups & downs in between. That said, my GPS said 4100' EG (which tallies better with how my legs feel right now) and the TOPO profile totaled the route to 4400' EG (which seems a bit much). Since there are a lot of little ups & downs along that ridge, I've edited this TR to 4100' EG. 3800 or 4100, serious calories were definitely expended in the making of this hike.
Top

I believe there is about 100' of EG going down Ruckel Creek Trail and about 3800'
of EG going up Ruckel Ridge. Got the 100' down EG from entering the route into
TOPO, and the up EG is from my GPS track after inputting that into Garmin Basecamp.

Ruckel Ridge/ Ruckel Creek loop hike is between 3800-3900' of over all EG if just
hiking the standard route, obviously the EG could be different if one explores off trail
waterfall hunting etc . . .

Gorgeous shot of the trail in the fog. Great work!
www.blurb.com/user/chameleon707
Top

Let's say you went on a totally level route.

Everytime you took a point you'de record an elevation value.

If the software went through all your points, it would calculate and elevation gain and loss, but actually there wouldn't be any, that would be totally an error.

For example, if there were 1000 points on a 10 mile hike, and every other point was 1 foot higher or lower, then you'de have a false 1000 feet of elevation gain and loss.

If you went up a steep trail, you probably wouldn't see this, because the true elevation gain for each point would be larger than the error.

It's interesting to read these discussions about elevation gain. I don't have a GPS and EG is only one of many factors when I decide to do a hike, so it's just a matter of intellectual interest for me. It seems to me that EG should be the sum of every rise you take (big or small) when doing a hike. In the case of Ruckel Ridge, there are little rises (and drops) on the ridge itself that should be factored in; however, the total EG is not going to be that different from the one calculated as the difference between the lowest to the highest point.

More in dispute are the EGs I see for a hike like the Clackamas River Trail. Hiking books list it as a hike with only a few hundred feet of EG. However, if you do the whole thing, in and out, it comes to around 3,000' (an actual elevation which you never achieve) because of all the rises and drops (and then drops and rises coming back). Of course, it's much less strenuous doing a bunch of rises and drops, never more than a couple hundred feet at one time, than one constant steep rise over a short distance, as in Ruckel Ridge.
Top
Post Reply
12 posts