Today’s hike was up Silver Star via its S ridge. If you wanted to do Silver Star on a weekend, this approach would probably be less crowded than coming from Grouse Vista. The TH is a gated side road to Road 1200 at about 1500’. 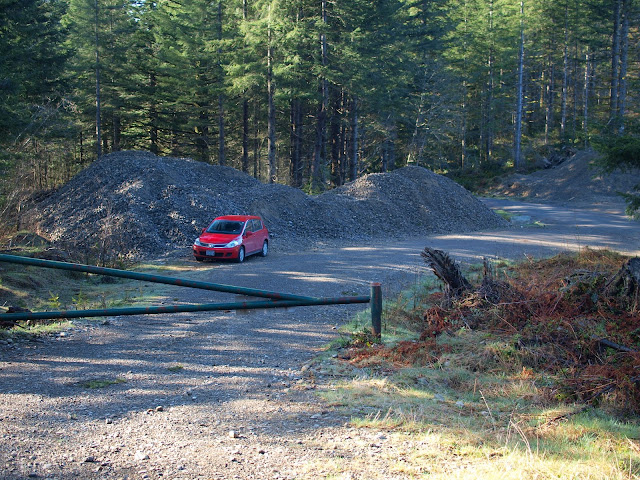 Past the gate, the road to the left begins a gradual, but occasionally steep, climb up the south ridge. About ¾ mi from the TH, there is an obscure turn to the right (at a large tree stump, arrow) that allows you to continue climbing – staying on the far more obvious road leads to a dead end and then bush whacking to get back to the correct road. 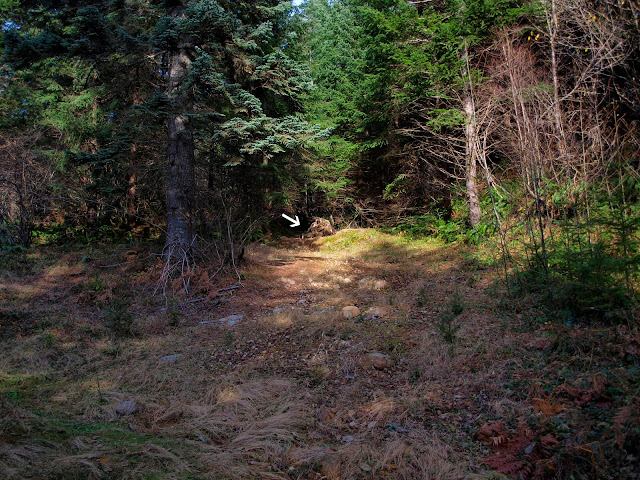 At 3200’, the road turns the corner of the ridge and the view opens wide to include Silver Star in the distance and the peak (Pt 4060) with the Indian pits in the foreground. 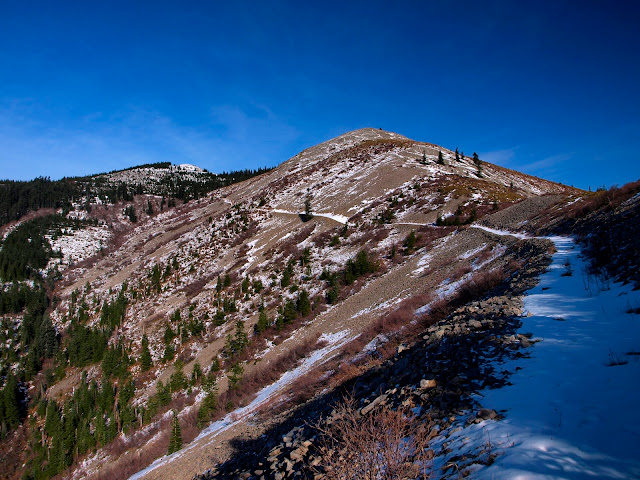 I returned via the obvious road but went up by climbing the ridge over the pits, to maximize my views. I also went this way last May, when the slopes where the road is were loaded with unstable snow and traversing them would have been an exceptionally bad idea. 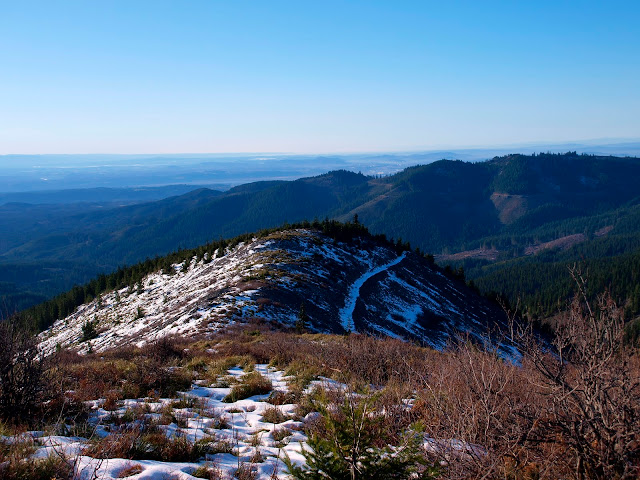 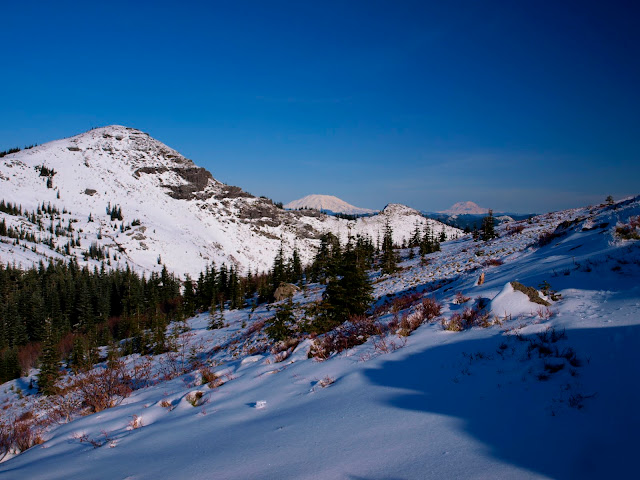 I worked my way along the ridge to Pt 4086, from where I could see Jefferson on the far horizon, 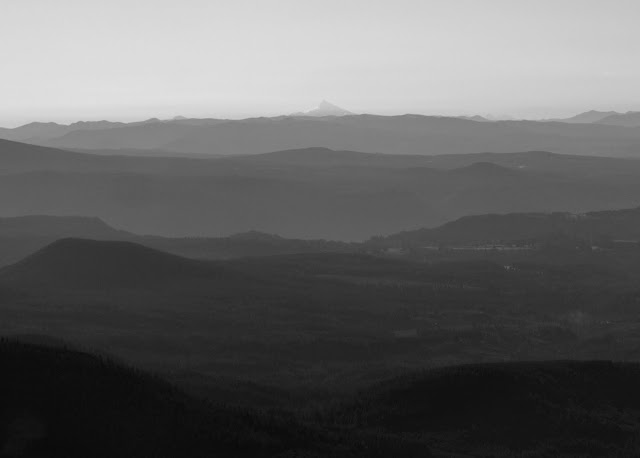 and Hood directly to the S. 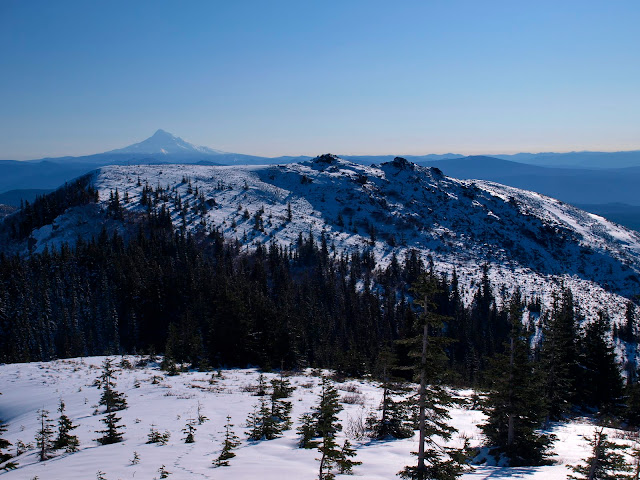 I had microspikes along (didn’t use them), but had passed on snow shoes, figuring that the snow would be fairly compacted after the recent rains and warmer weather. I post holed in a few spots but it wouldn’t have been worth hauling snow shoes up there. The snow isn’t even deep enough (yet) to completely obscure the trail. 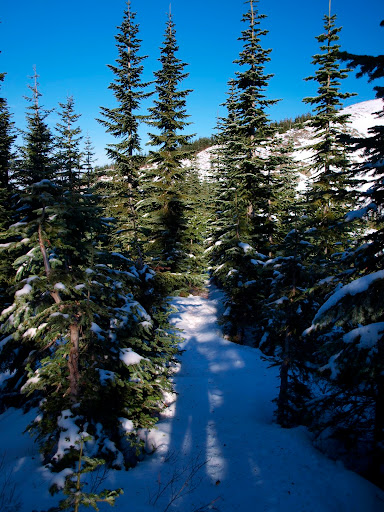 Mine were the only tracks coming over from Star 2 toward the summit (there were some old tracks up from Grouse Vista). 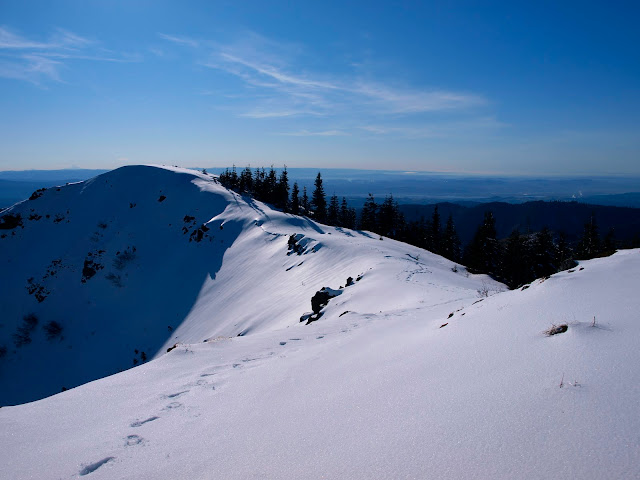 From Star 2, I could see Sturgeon Rock in the foreground, Saddle Mountain (under arrow) on the far horizon, 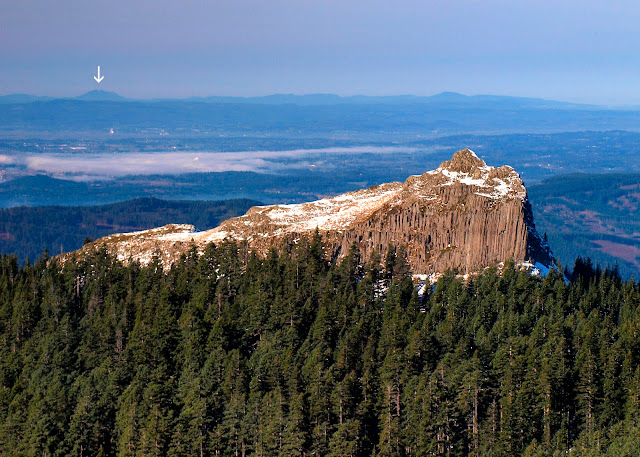 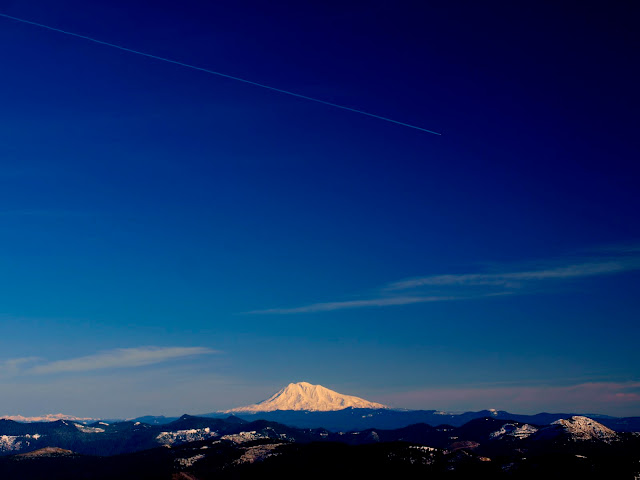 From Star 2, I could also see across to Silver Star’s true summit, with St. Helens and Rainier in the distance. I initially thought the tiny white object on the summit (under the arrow) was someone’s relic snowman, but as I got closer to the summit, the “snowman” suddenly leaped into the air and flew away! It was a large, almost all white bird – A Great Snowy Owl is my guess, even though this is at the southern edge of their range. 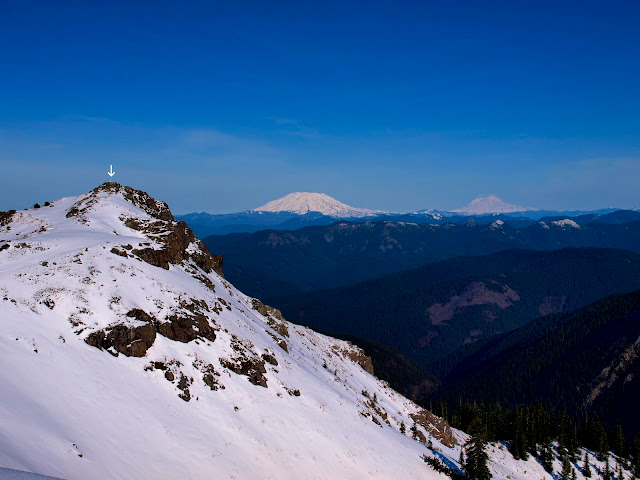 After a snack, I headed back by crossing back over PT 4086 and then dropping down to the old road that traverses below Pt 4060. This was a short hike (7.5 mi RT), with reasonable gain (3000’), but the views are amazing and traversing the treeless, exposed ridges has a real alpine climbing feel to it. I can’t wait to do it again when there’s enough snow to justify using snow shoes! 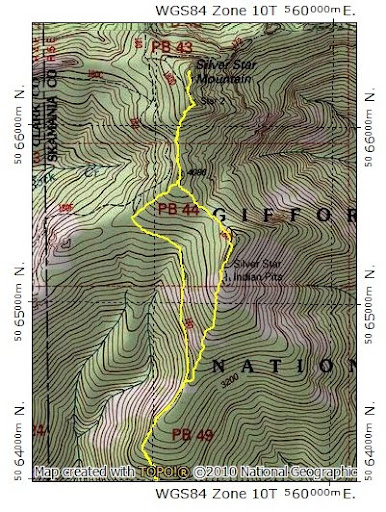 Great TR as always!!
I really need to get up there! Once Tom/Roy is ok to give me a tour of his stomping grounds

Excellent photos and report. - a bit envious as I had to do monthly reports and stayed glued to my desk all day. Tomorrow becons.....

Neat you got to see that owl. Not sure if this is really their southern range. I caught a glimpse of something (barn owl?-- but really pretty white for a barn owl?) in Hawaii a few days ago I can't id: It flew out of one of the caves in the Great Crack on the Big Island and took off into the distance at an incredible speed: Not pure white, but kind of off-white: It surprised me and the camera didn't have time to focus. Here is the original and a blow-up:

DN
"Everything works in the planning stage".
Top

Brad, thanks for the info. The one I saw seemed to be a lot lighter than the pic you posted but maybe there is some variability. My hiking partner go a shot off too and I'll see if I can get her photo up - I think she did a better job with the camera.

DN
"Everything works in the planning stage".
Top

I an still amazed we have not crossed paths in the winter. I take alot of week days off to, of course this year its not going to happen.I did decorate my house today Its funny how something kike that changes a mood,

Mayhem I would love hike up there with you think the only way to level field is for me to ski and you sno shoe. not even sure about that,

I contacted Curzak about sking the elk creek trail in a couple of months. If you guys slog in snow sno shoes { I MIGHT be ok }
The downhill of the mind is harder than the uphill of the body. - Yuichiro Miura
Top

Thanks Brad. The S Ridge TH (at 1500') is likely to be open and accessible even when Grouse Vista is not.

I didn't have time to get a picture, but what I saw was almost all white and looked a lot like this (which is a Snowy Owl)

It seems snowy owls move into the northern U.S. every 3-5 years when food (lemmings) is in short supply. I don't know much about Hawaiian birds (although I lived there for awhile), but it's easier for me to envision a northern mainland bird moving south than an HI bird flying 2500 mi east, but then nature has fooled me before...
Last edited by VanMarmot on December 2nd, 2011, 8:05 am, edited 1 time in total.
Top

Looks like it was a beautiful day and you captured it magnificently. I trust there are no exhortations to pay the DNR fees at that lower trailhead?

On the subject of owls: The pueo is a subspecies of the short-eared owl (Asio flammeus); we have plenty of the latter in Oregon, but they are not white and not nearly as large as a snowy owl (15" vs. 24" or so). Snowy owls sometimes come this far south, but it seems early (but not impossible) especially considering the relatively mild weather we've been having. Audubon reports the occasional snowy owl sighting in the Willamette Valley most winters, so if you saw one, it was indeed a rare and precious observation.

bobcat wrote:Looks like it was a beautiful day and you captured it magnificently. I trust there are no exhortations to pay the DNR fees at that lower trailhead?

The "TH" isn't "official" - just a junction between Road 1200 and two logging roads - one seemingly bermed-off and the other gated. My guess is that if you don't block the gate, side-road, or gravel piles, you'll be OK. Judging from the tracks, it also seems to be a popular parking spot for hunters/ATV'ers.
Top

very cool TR as it highlights winter trailhead access to ski this area most anytime.

as far as the bird sighting very cool, I vote for the great snowy owl. It makes sense that if one ventured farther south for its winter migration that it would naturally seek terrain with a snowy resemblance to its home, given Silverstars winter blanket and terrain it sort of sticks out in that area.