) but my old job graciously allowed me to use up some of the vacation time for which I would not otherwise get compensated (after 15 years, I guess they felt they owed me a little something). Using these unexpected days off for hiking seemed like a great idea, particularly since the weather is being unusually cooperative for Nov/Dec. Today’s effort was Table Mountain from Bonneville Hot Springs. Outside of Portland, the skies were clear and blue early on. 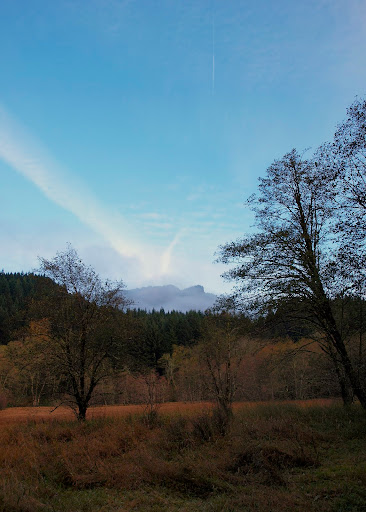 But by the time I’d gotten half way up Table’s east ridge, clouds were pushing up against the summit, 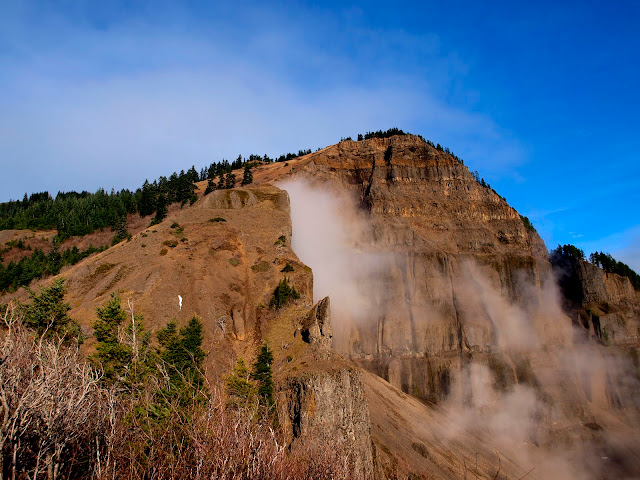 and infiltrating the valleys below. Hood was sporting quite a lenticular cloud. 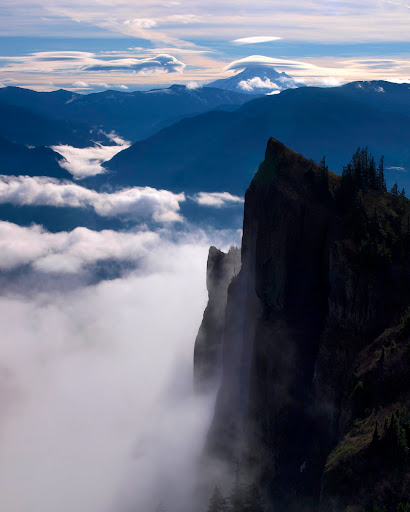 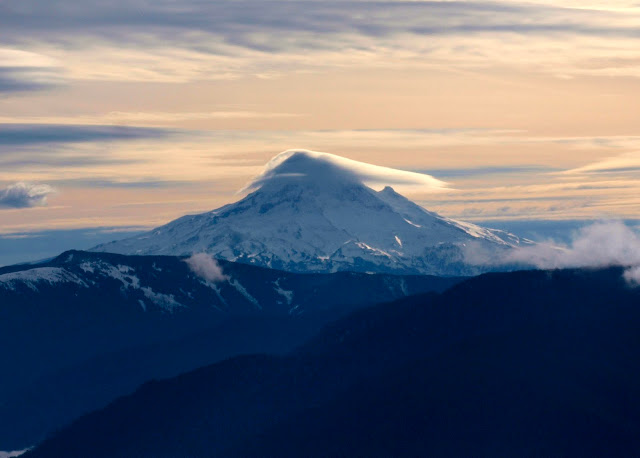 From the PCT, I went up the Heartbreak trail to the saddle at 2600', then went straight up from there toward the summit, hugging the E edge of Table’s upper slopes. This gave me a lot more views then I would have gotten wandering through the forest and schlepping up the boulder field on the “new” trail. From the top of Table, I could see Hood to the S, Wind, Dog, Augspurger, and Defiance to the E, and, 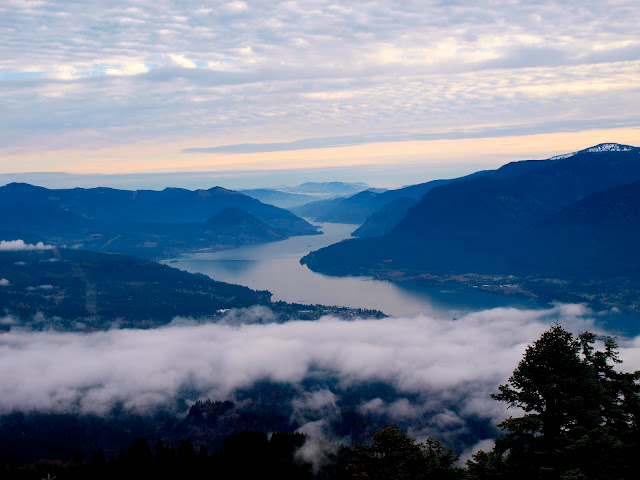 to the W, Hamilton with a garland of low clouds and, in the distance, Portland under a blanket of clouds that topped out at about 2000’. 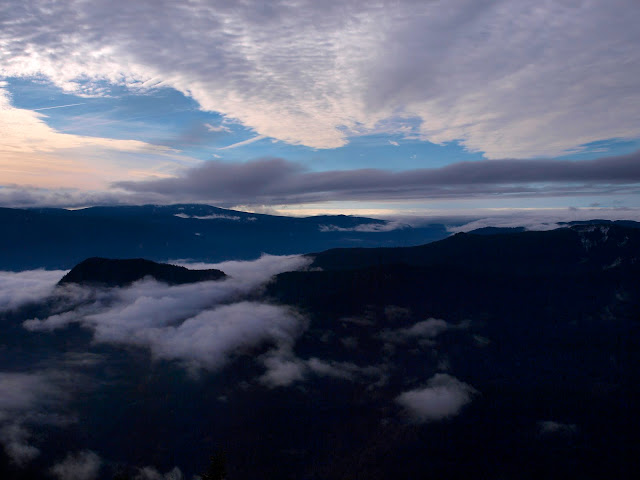 There was a little snow on part of the top – and a lot more on Table’s N side, but none on any of the trails on the S side. I descended the W ridge to the PCT and back into the valley clouds – which provided some eerie moments down in the trees. 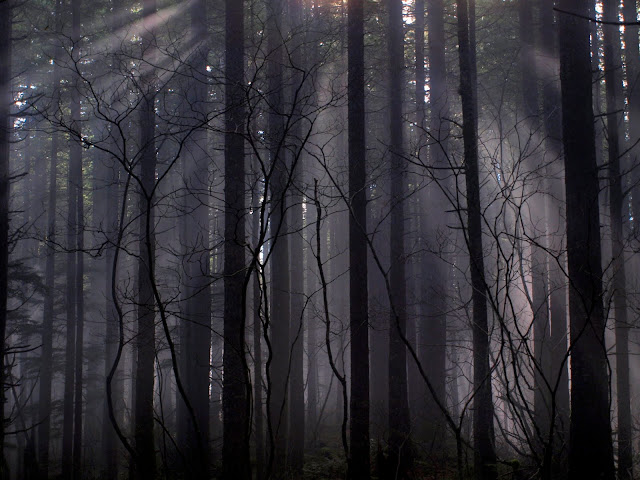 This hike wasn’t just about big views – I found this little 1” long fern growing in the rock pile where the W ridge trail joins the PCT. 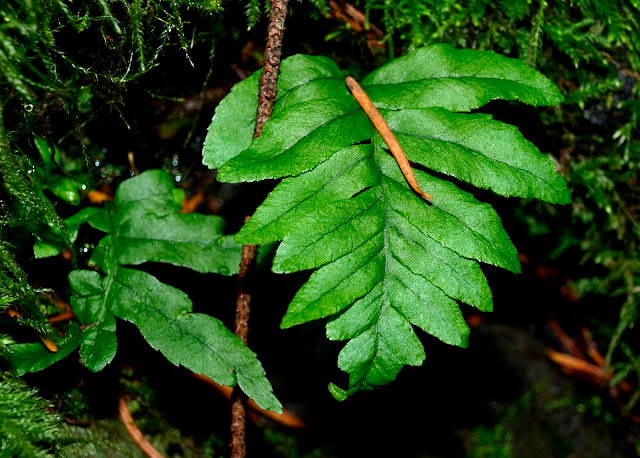 Then it was back to the TH, my car, and home. Classic Gorge hike, pretty nice day. 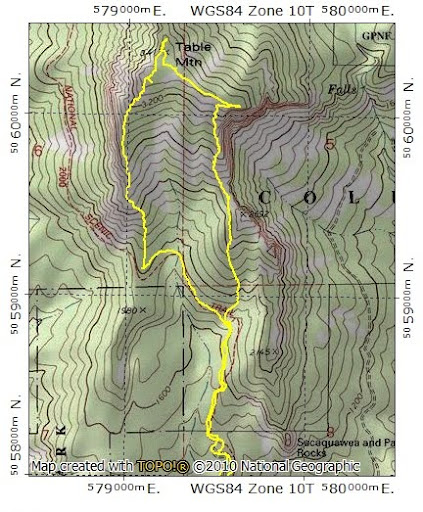 Congrats on the new job.
Top

Wow that third picture down is awesome! Great combo of the lenticular cloud, the cliffs and the low clouds. Apparently I should have went hiking today...but alas I had to work!

I am taking some extra time off next week so hopefully I can take advantage of the nice weather!
Tyler Mode
http://www.naturespixpdx.com
Top

Egads man! Good luck on the new job. But in the meantime, those are some of the best pics I can remember. Well done!
http://facebook.com/AdamSawyerProfessio ... nOfLeisure
http://adamsawyer.com/
Top

Congrats on the new job.


Thanks! But I am going to miss those Tuesdays...
Top

Bruce - congratulations on the new job! That you will no longer be hiking on week days will probably amount to some form of local climate change: There will no longer be VanMarmot bluebird skies on weekdays! Hopefully we can do some more car2car hikes in the future. You pictures are superb and make me wish that I was not sitting at a desk working.
Some people are really fit at eighty; thankfully I still have many years to get into shape…
Top

The photo of the woods is really nice Your trs always have a certain grace or touch of class to.them after being broken for three months i appreciate there return..

Those pics are amazing! I need to get out again.
Top

Stunning pics. The one looking up misty canyons to Hood with a lenticular is epic. That image is inspiring!
www.blurb.com/user/chameleon707
Top

Ditto on the pics, Van -- BTW, No. 3 is a terrific B/W conversion candidate (I sneaked a peak, and it looks great). Print it and frame it!