Even though today wasn't forecast for bluebird weather, I did have it off and had time for a short hike, preferably one with fresh snow. That old gorge classic, Neismith Point, seemed to meet the distance and elevation (for snow) criteria, so off I went. This isn't a hike with a lot of views but I did catch a glimpse of Hamilton with a new dusting of snow. 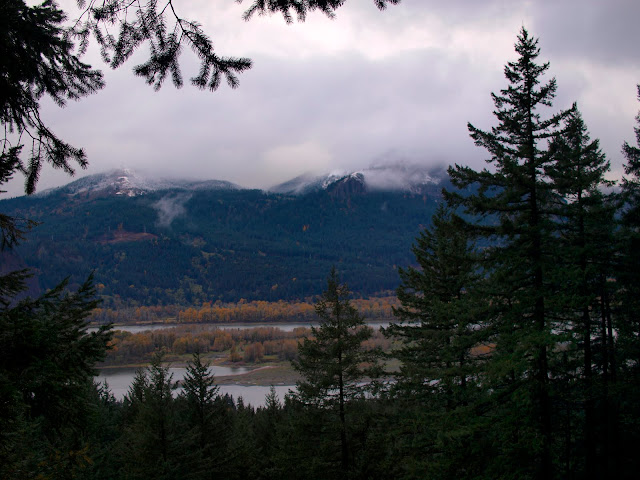 It didn't start raining until I hit 1600', which was also about where the freeze line was. So I was able to do most of the hike in a gentle sprinkle of new falling snow rather than in obnoxious rain. 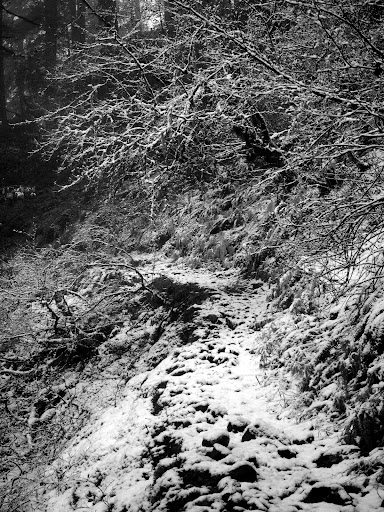 The snow kept deepening as I climbed - generally around 6-8" - but in some open areas higher up, it got to 18". Fluffy, soft powder - no need for snowshoes or traction devices. 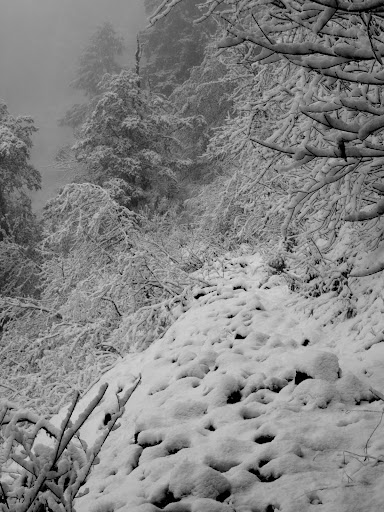 Without many views, I had to focus on smaller objects, like this snowbird. 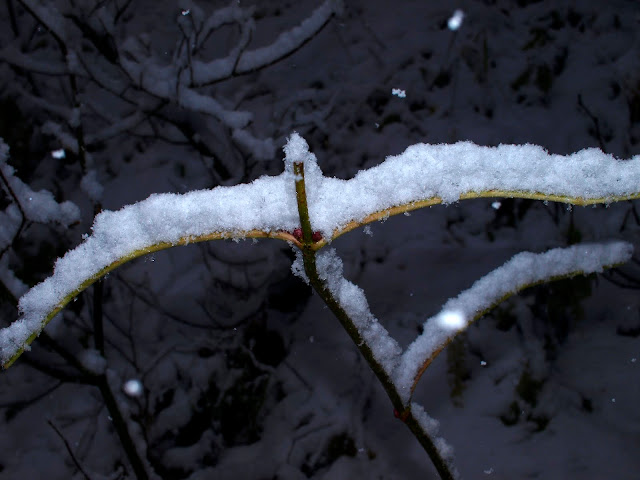 I hit the ridge at 2700' and had a weird sensation of having the snow-shrouded trees crowding in on me. 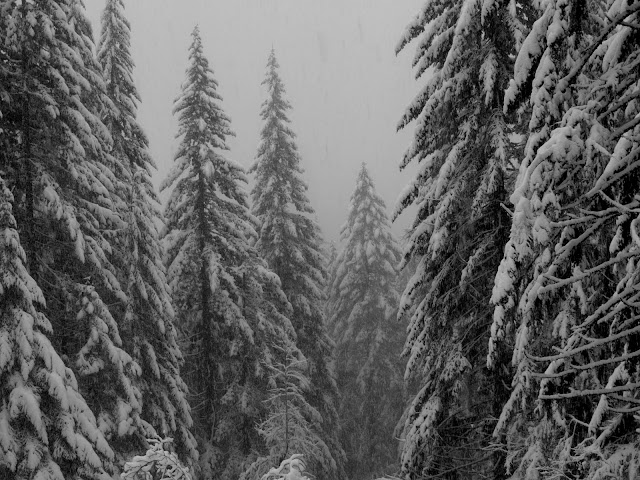 I had no trouble finding and following the trail - the snow isn't deep enough yet to have erased all signs of it. The snow on the final stretch of old road to the summit looked like it had been manicured. 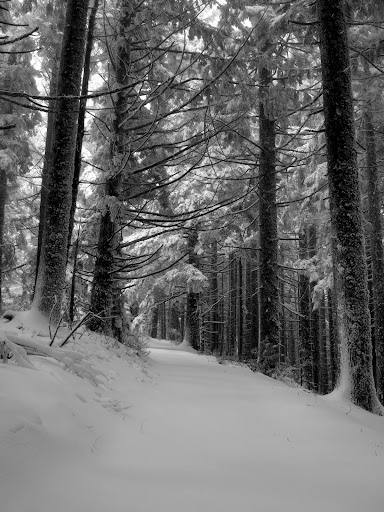 The snow right at the top had actually been formed into drifts that were 2-3' deep, 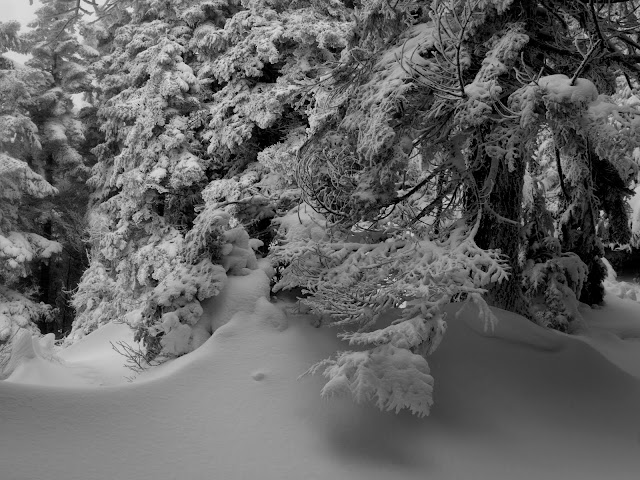 and the old summit sign was starting to ice up. 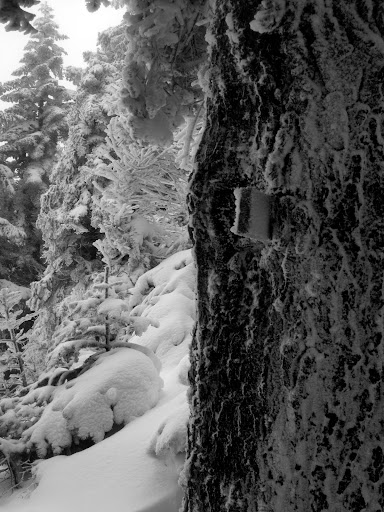 It pretty cold on top, with cross wind, so I downed a piece of truly cold pizza, drank some iceberg-laden Gatorade, and headed down. I didn't see anyone else the whole day and my car was the only one in the lot - usually there's at least one other person on this popular hike. The weather wasn't great but walking through gentle snow falling on un-tracked fresh snow was pretty neat. 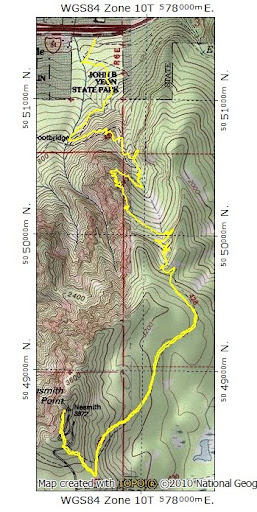 winter sure did arrive in a hurry. bye bye fall colors

i have been visiting my grandma in florida since saturday.

we had about 2-3 inches of snow on my last hike before i left (june lake, wormflows... MSH) so i expected a little snow, but holy smokes, whats going on out there?!?!
Top

Glad I'm not the only one... nothing better than a slice of cold pepperoni pizza out in the wilds..! Plus, it has the advantage of already being flat, so very pack-friendly..!

Oh Van, I'm super jealous! Those snow pics look just as serene and pristine as you could ever hope for.
http://facebook.com/AdamSawyerProfessio ... nOfLeisure
http://adamsawyer.com/
Top

Bruce - Given the weather and the conditions, that was a great choice for a hike. On a bluebird day this hike is less attractive due to the rarity of views.
Some people are really fit at eighty; thankfully I still have many years to get into shape…
Top

Great pics, and wow! All that snow. And being the first one to hike in fresh snow is awesome.
Jim's Hikes

Nice tr those trees at 2,700 ft do look pretty ghostly.
The downhill of the mind is harder than the uphill of the body. - Yuichiro Miura
Top

Great report and pictures - we headed up Munra Point today and found about 6-8" at the top with some very nice views down river towards Portland and back up onto the Benson Plateau. The basalt was rather slippery but taking time it all went well.
Top

Crusak wrote:Great pics, and wow! All that snow. And being the first one to hike in fresh snow is awesome.

Unless its 30'' and you have to break trail, then it's just super loony awesome!!!
Top

Crusak wrote:Great pics, and wow! All that snow. And being the first one to hike in fresh snow is awesome.

Unless its 30'' and you have to break trail, then it's just super loony awesome!!!

Yeah being the first one up when it's knee deep is fun for about 100' or so, then it's just a lot of work.

With a big payoff, though. Much better to take turns breaking trail.
Jim's Hikes