Yes I do fill one out every time one is available but I think it may come back to bite me :^(...

A few years ago the Forest Service was all in favor of limiting trailhead access, in their words to "preserve the wilderness experience"! While many of you may disagree with me I am not in favor of limiting trail head access. While I'm happier when I see less people on a trail I think this is a small price to pay for the freedom to wake up in the morning & decide to go for a hike on Mt. Hood with no pre planning. I don't want the Mt. Hood Wilderness to become "The Enchantments"...

Filling out too many permits may give some people all the amo they need to try & restrict trailhead access!
hiking log & photos.
Ad monte summa aut mors
Top

I got to differ on the Scantron at South Sister. It takes way longer to figure out the day's date in numerals and fill it in like taking the SAT.
Top

Excursionista wrote:I just got back from some hikes around South Sister and I loved the professionalism of the scantrons, as well as the message boards at the trailheads. For example, they had laminated maps of lakes (Moraine, Green, etc) taken from Google earth, overlaid with topo lines, and marked with campsite locations. They even had brochures for topics such as "tips for low-impact camping at lake X." And for a day hiker, the scantron was easier to fill out and more legible than carbon-copy. As others have said, the pencils always suck and tying the permit outside a pack is a pain.

I guess I've always though the permit would help SAR locate missing hikers, in addition to monitoring trail usage, so I always fill out a permit when they're available.

But now I have to consider why some areas (like South Sister) have such nice TH boards and forms, and other equally popular places don't. One difference is location - pemit boxes at the trailhead tend to stay better maintained than those miles deep in the woods. But as for allocation of funds and resources, why do the Gorge and Mt. Hood wilderness trails look so shoddy compared to those at South Sister? We know Mt. Hood isn't spending cash on rangers...

When I took a Wilderness Management class at OSU the instructor basically solicited students to serve as volunteer wilderness rangers at the conclusion of the course. I think the OSU Cascades campus uses the proximity of the Three Sisters to their advantage by incorporating projects into their Natural Resources major. Just my thoughts.
Top

I fill it out if there is a form in the box, but I do not list my street address. Unless I'm missing out on a Xmas card, they don't need to know where I live.
Top

I think I've only registered once at ramona falls lol. There were none left when I tried hiking up to McNeil in early July and I forgot to today. That should be an option on this poll: forgetting!
Top

I fill out a form if they have any available (have seen quite a few empty boxes this year). The motorized community has huge lobbying groups clamoring for access to more real estate, so the Forest Service needs to know that hikers are using these trails. When the forest passes were still in demo stage, one of the FS districts in WA proudly announced that they had spent some extravagant amount of funds from HIKERS to develop a parking lot for SNOWMOBILES!! They apparently received some lively comments, and they have not publicly admitted to diversions of this type again.

I use my first initial, last name, and zip code; that should be enough for survey purposes. Based on the apparent infrequency of collecting the forms, I doubt they would have much value for rescue purposes. Also, some of the collection boxes have huge slots, so it would be easy to retrieve forms and use them for identity theft. It used to be that the scumbags who trash trails would not venture more than 2-3 miles from the trailhead. Now Eagle Creek is an open latrine, all the way up past Tunnel Falls. IMHO, anyone who would throw used diapers, toilet paper, and packaging materials in a wilderness area, would not hesitate to indulge in other antisocial activities.
Top

Has anyone else encountered FS survey takers at trailheads? I have been stopped twice; at a trailhead last Thursday evening, and ~1.5 mi. up a trail on Saturday, at different trails in the Gorge. (I had hoped to hike on Mount Hood yesterday, but many trails are closed for the Dollar Lake fire, and even those on the west side seemed unappealing, with the smoke blowing west beyond Sandy.)

They have a long questionnaire; mostly general info. How long will you be out on this trip, any other activities today besides hiking, how frequently do you use the trails, etc. Are you visiting any merchants or staying at any hotels in the area, or spending any money in the area. Limited demographic info - zip code, age (10 year ranges), income range (I declined to answer that one).
Top

Just stumbled across this thread. Very interesting, some of the premonitions!


Grannyhiker wrote: ↑
August 25th, 2011, 1:43 pm
I always fill out the permit form if there are any available. The USFS uses this data for trail maintenance and other issues.

Exactly what I'd have said (and did) until a few years ago.


Splintercat wrote: ↑
August 26th, 2011, 7:49 pm
I have no problem with the USFS using this data for good, not evil -- e.g., to figure out where the heaviest use is, and in turn, where MORE trails are needed. But I am leery that the reverse case might be made for lesser-traveled trails.


Guy wrote: ↑
August 27th, 2011, 7:44 pm
Filling out too many permits may give some people all the amo they need to try & restrict trailhead access!

Give that man a ceegar!

Waffle Stomper wrote: ↑
August 26th, 2011, 4:07 pm
If somebody in protest does not fill out the form and nobody knows they are protesting is it really a protest?

They now know when I fill them out in protest! Will y'all join me? 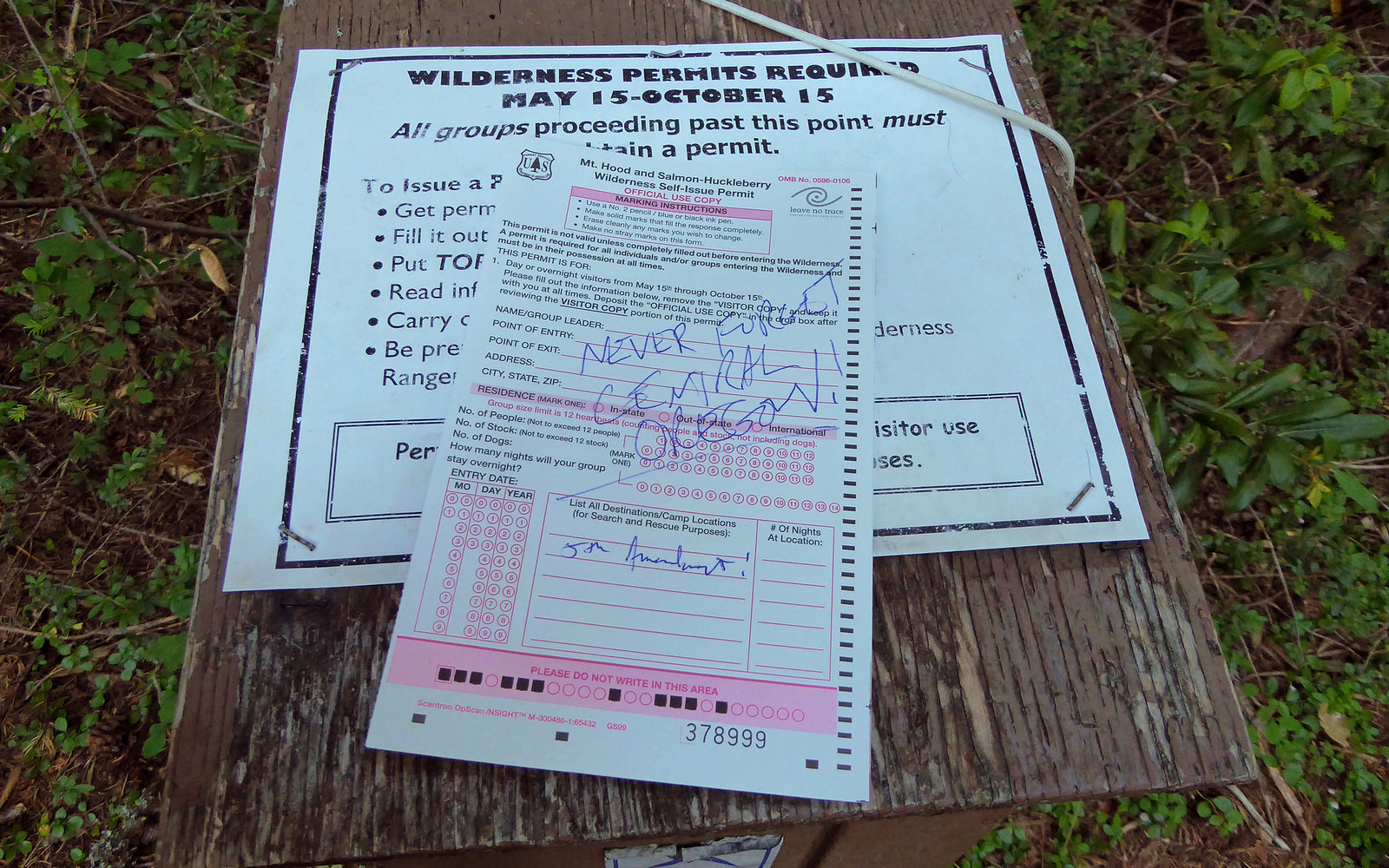 So I have been out of the hiking scene for several years. Can you give me synopsis of what the USFS is doing with trails these days?

Having once worked on fire/trail crews in summers in the 70s it is hard to see the collapse of services and attitude of FS employees/agency in the last couple of decades. Afraid to find out the state of things now...
Top

They now know when I fill them out in protest! Will y'all join me?

Unfortunately, while I understand your intention, your "protest" is not reaching the people who are responsible for the outcome. The permits are sorted and counted by volunteers, interns, and Forest Service rec technicians. The numbers get recorded and passed on in order to prove numbers for next years request for trail work funding. The permit you scribble on is just wasting money and resources since it will most likely end up in the trash. You need to go higher up the chain if you want to make an impact.
Top
Post Reply
74 posts