The Cascade Mountains are full of many strange and beautiful effects. I’m going to show you one you’ve seen many times, something you will probably recognize, but like me have no name for. Hopefully someone here can provide us greater insight.

Sometimes, especially in winter, the area east of the Cascade Crest clouds over to about four or five thousand feet and begins pouring over the high ridges through the gaps. This cloud spillage is most often seen over Waucoma Ridge when there is a high pressure to the east. 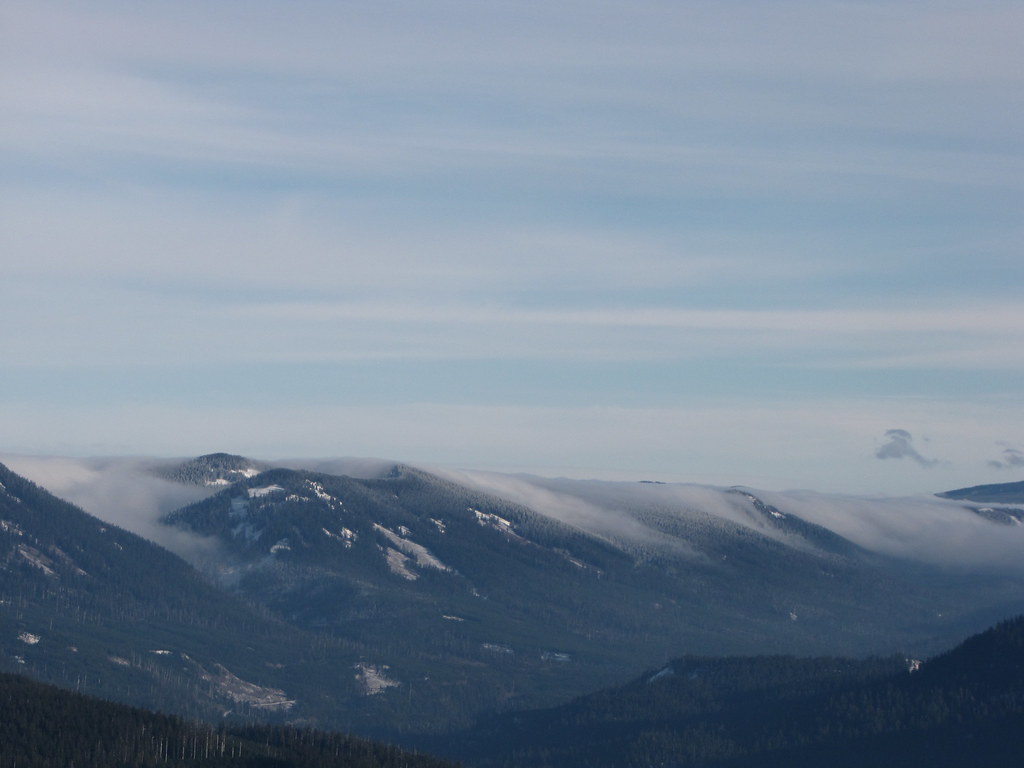 Here’s a picture of Barlow Pass looking down from near Timberline. My car was down there at the trail head hidden by the swirling cloud. When I got back, everything was coated by a fine coat of perfectly smooth, zero friction Ice. Although the parking lot is virtually flat, I had to find sand to put under my tires and for some distance in front of the car to get moving. 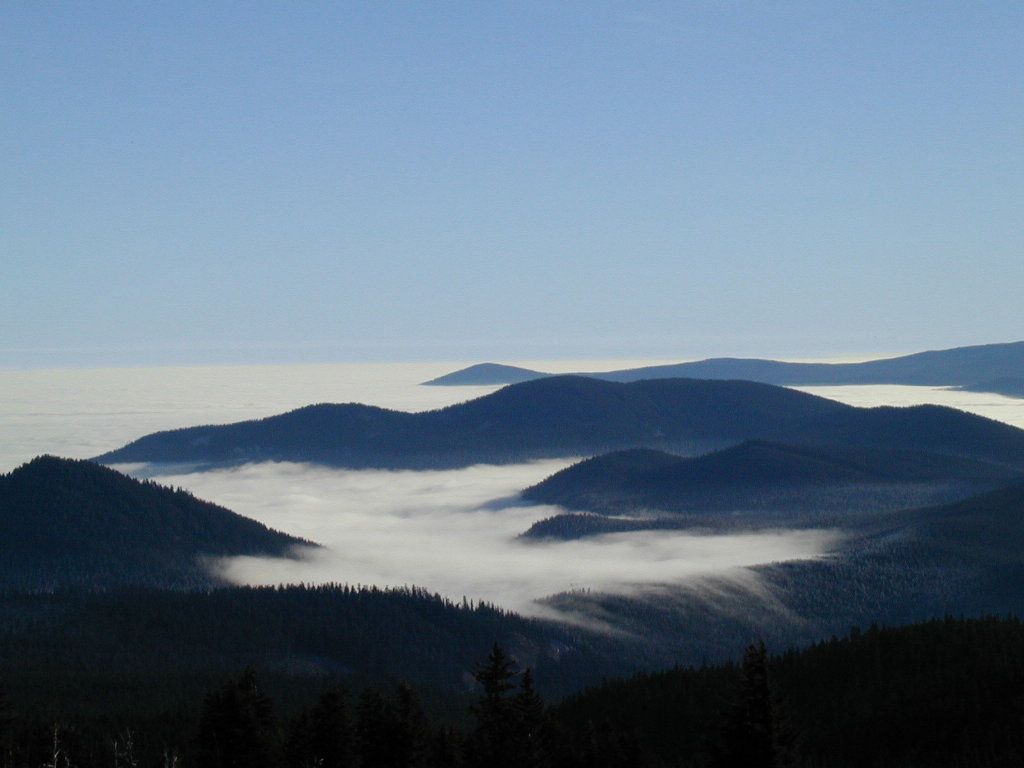 Everybody knows this phenomena I’m talking about, right? Anyone know what’s it called? If not, let’s NAME it!
Top

GREAT idea, Fred! I'm fascinated by this phenomenon, too... but use the lame description of "cloud waterfall" which just doesn't work (though it does capture the idea that these must be seen in motion to appreciate). Here are some that I've posted here over the years...

The view from Bald Mountain -- also showing the hoar frost effect that often occurs within these formations: Here's one from the opposite direction -- this is a weak summer storm pushing up against the crest, as seen from WyEast Basin, and spilling into the dry air of the eastside: So, that's another part of the phenomenon -- works from both sides, and is basically the effect of moist clouds on one side or the other encountering dry air in the other side, and evaporating as it flows over the crest.

One more view - this time, looking from the east, toward Mount Hood, as the fingers of eastside fog work their way up the East Fork toward gaps in the crest, producing the effects that we see from the west side: We definitely need a name for this... the "Crest Effect"..? I liked the title of your thread, Fred.

Or the clouds go over the ridge, then lose elevation which warms up the air, so they have more capacity to hold water, so the clouds disappear.

Same idea as a lenticular cloud.

And why there's more rain on the West side of the mountains.

That frost sounds difficult to maneuver over.
Top

Most definitely. I encountered a crazy scene at Lolo Pass several years ago (where the hoar frost develops to epic proportions from this phenomenon), and the last 1/2 mile to the pass was completely wrapped in fog and glazed in about 3/4" of solid ice. There were cars and trucks pointed various directions, in the ditch, sliding TOWARD me as a result of it being in late November, and people out cutting their noble fir Christmas trees. I got to the pass, turned around... and threaded my way through the chaos to GET THE HECK OUT OF THERE!

The Bald Mountain photo (above) was taken that day -- I simply approached the Top Spur trailhead from Last Chance Mountain Road, instead -- clear as a bell, and no ice until I reached the site of the old shelter and Confusion Junction, and then only in the treetops. Here are a couple more from that day:

Frosted treetops near Confusion Junction (the ground was totally clear, save for chunks of ice that had fallen from the trees): To clarify the phenomenon, I think it's a bit different than a lenticular, which is produced by compressing air to beyond the dew point as it pushed over high ground. The "crest" phenomenon (in my mind, anyway) is about competing air masses -- one colder or wetter than the other, with clouds evaporating as they hit dryer or warmer air. Hopefully, one of our weather junkies will weigh in on this...

What's unique is that one side of the crest is a sea of low level cloud, (tops between 4000 and 5000 feet) that spills through the gaps. It seems like this should already have a special name. If it doesn't here are some ideas...

Cascade Crest XXXXX. Don't think we should use "Effect" or "Phenomena" or anything scientific or technical. The name should sound simple, descriptive, well worn and rustic. Use words like Sam Barlow or Joel Palmer might have used.

If push comes to shove we can always make up an old Chinook Indian word.
Top

Retired Jerry has it. It's simply cool air pooling. It happens all the time from the west going to the east when we have marine air in here. If you ever get above low clouds, watch them, they slosh around, as soon as the cold air "spills over" the clouds will too. What I still consider the best hike I've ever done was at Mt. Rainier when this happened.

They can create fog bows...

It's fun to watch them evolve those, each of the following photos are about 20 seconds apart...

They can also be great for spotting glories...

Many times in the winter, the cold pool east of the Cascades will start shallow. Then as high pressure sits overhead, winds are extremely light and the cold pool slowly deepens. This is evident by watching places like Redmond, who sit above the cold air for a few days, with highs in the 40s and 50s, until finally the cold pool deepens enough and temps fall into the teens and 20s.

It is this cool pool east of the Cascades that also helps drive our east wind.
Tyler Mode
http://www.naturespixpdx.com
Top

Is there a name for it?
Top

Another one is "Upslope Fog". That is prob what the pics are of the fog spilling over the ridge, most like because there is an upslope wind pushing from the other wise.

Take a look at some Aviation Weather websites (there are MANY!). They have many photos and explanations.

Those photos are AMAZING!!! I love weather.
Mountain wave clouds are my favorite (when I am NOT in the air!!).
Anyone have any pictures of those?
Top
Post Reply
14 posts