In the Silver Star neighborhood today. The 2500' arrow in pic below was about as high as I got. Notice that's just barely above the snowline, but it was suddenly deep, tricky to walk in. I suspect Grouse TH is accessible, but snow probably starts soon after. That could make it a great snowshoe hike, with perhaps no need to pack them up the trail.

Herman Creek trail, snow starts just after you leave the burn area, about 2400'. After that it gets deep quick, and wasn't quite crusty enough to not posthole.


There's also some significant trees down across the trail in a couple spots but overall pretty navigable. Most of the damage is between Whisky creek and Cedar Swamp camp. Here's the worst one, >5' diameter monster straight across the trail.

Easy enough to go around on the high side

You know exactly what to do.
There's no need to be afraid.
Keep walking.
Top

That's an advantage? I can go hike Deschutes if I want to avoid EG. I've got my "winter pounds" that I need to get rid of. I like uphills - as long as they aren't too steep.

Ha! At my age, I'll take every unfair advantage I can get!

Those winter pounds are something else, though: You know, of course, what the "19" in "Covid 19" means don't you? I'm lucky, I gained only about ten pounds since a year ago, so I consider myself ahead of the curve.

Don Nelson, I still aspire to do as well as you when I grow up. I am 64 so fortunately I have time to get in shape

Don Nelson, I still aspire to do as well as you when I grow up. I am 64 so fortunately I have time to get in shape

Oh what I'd give to be 64 again!
"Everything works in the planning stage".
Top

I left the north Tarbell trailhead, followed Tarbell, cut over on Chinook to gain the north ridge of Silver Star.

There was new snow (I could see it above in the trees).

Getting to the crest of the ridge was tough. The new snow was very firm (virtually no footprints left behind me). I wasn't planning on going this direction when I started out, and I had no traction. I struggled up to the crest, where it was easy walking until the gendarmes. I couldn't bypass them. It was a beautiful day, and with the right equipment it would be a fun ascent. Based on the forecast, I was sure the snow would soften in the afternoon, but it was way too cold/windy to hang out waiting for that.

I'm disappointed, of course, but I had fun where I was at, so was grateful for that.

Couldn't decide on a beer, so went sober today. Yikes, it was terrible. I don't know how people do it!

At left is Sturgeon Rock. Notice the clearcut switchbacks on Tarbell Trail, just past Hidden Falls. Those switchbacks run from about 2000' to 3000', but you can't see the bottom in this pic. On Chinook Trail, snow started just a little above the bottom, where it departs from Tarbell.

Where I gained the crest of Silver Star's north ridge (a little above the top of Chinook Trail).

That snowy mound in center is what stopped me. Also, notice the corniced left side of the ridgecrest.

Made it to the base of the cliffs with ease, but that was the end of it.

Looking east, Starway to the left, Little Baldy to the right.

(Nice photos, by the way.)
Top 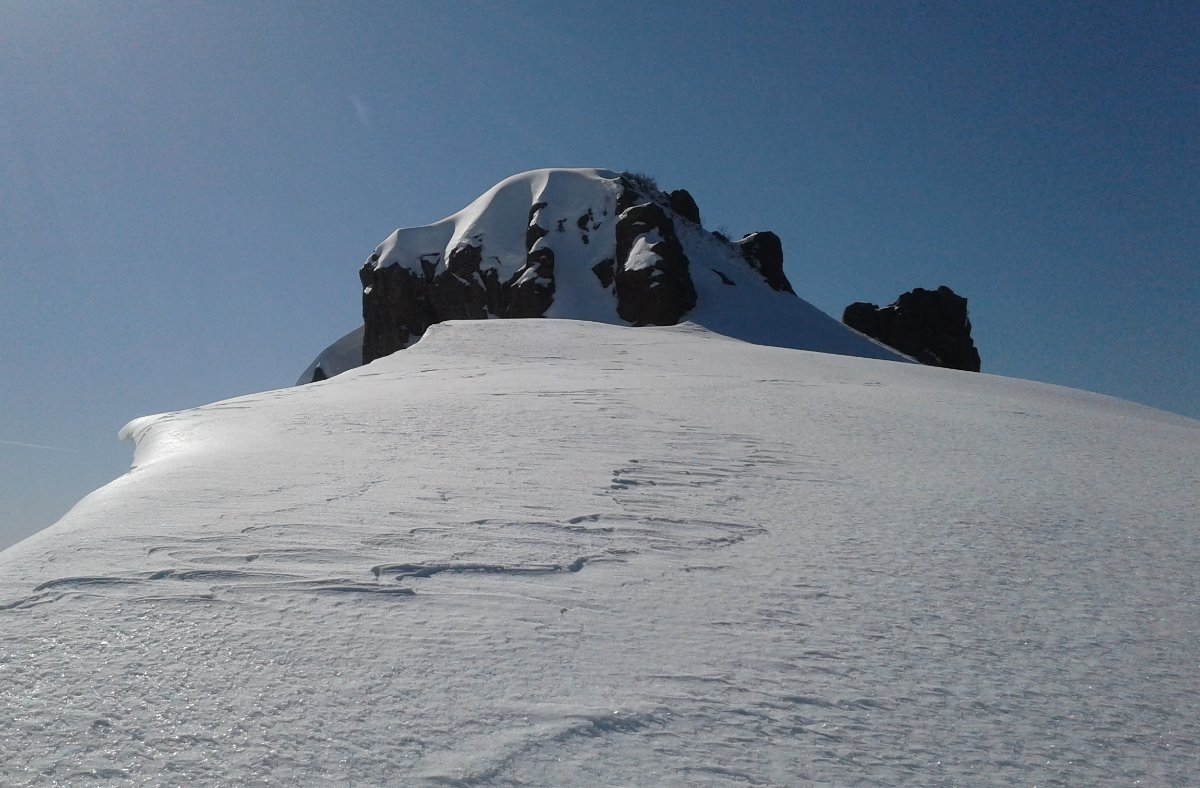 Made it to the base of the cliffs with ease, but that was the end of it.

You couldn't just walk around the right side and up that mellow looking grassy slope? (Didn't you have your XL ice axe?) Was the sobriety getting to you?

Tagged Green Point on 4/4/21. We took the Herman Creek trail and went up from there. Returned the same way. Snow started at Cedar Swamp, elevation 2800 ft.

I did Silver Star from Grouse Saturday.
Didn't start early enough and the snow was already getting soft from the sun around noon.
The ridge above the drainage was a little treacherous.
Slipping, postholing, just a bunch of mush. More work than it was worth. Even with spikes.
Turned back before hitting the wooded rubble incline.
Some spots I pushed my pole all the way down to the handle. Pretty deep.
Top
Post Reply
113 posts