I'm going to take my son down towards Summer Lake in mid-June for a few nights to do some birding and hiking. I would love any recommendations for good mid-distance (5-8 mile) hikes in the area, worthwhile destinations (we'll probably stop at Fort Rock, for instances), and especially places to camp. I understand that campgrounds are open down there, though we may be inclined to do dispersed camping so as to avoid neighbors. At the very least, we'd prefer underused campgrounds (we're going mid-week, so that should help either way), and fewer mosquitoes would be a plus. We've been told that Winter Rim (along NF 290) could make good sense for dispersed camping given its relative proximity to Summer Lake. But we've never been to the area before, so any recommendations will be greatly appreciated.
Top

Not exactly next door, but the Sunstone Area near Plush is a unique place to visit this time of year. Wide (WIDE!) open spaces, disbursed sagebrush camping anywhere in a 4 sq mile area, and you can spend your day doing nothing but walking and looking for gemstones laying right on the ground. Pretty sunsets, fragrant breezes, and an otherwordly sense of calm and quiet. Bring a shade tarp, cold drinks, and a sun hat. Maybe a concrete chisel and hammer if you have one.

The sunstone area is 2 hours east of Summer Lake
Top

Your probably going to get hammered by mosquitoes at that time. There's a mosquito festival in Paisley the fist weekend in July I believe

That being said, if you search for "camping"on Google maps you'll see quite a few spots in that area. Plus if you head down any of the Forest roads west of summer lake you'll find many options for dispersed camping.

For trips in that area you can hike up to the Hager Mountain lookout--there are a few ways to get up to the top. Or check out the trails along the Chewaucan River near Paisley. Hole in the Ground is a quick one not too far from Fort Rock.
Will break trail for beer.

Hager Mountain Lookout. You can drive up the LO road, and make it a shorter hike as I did with my son about a decade ago. Places to car camp along that approach road.

Also consider taking kid to Cowboy Dinner Tree if it's open. Very novel western experience. Extremely large portions, so you will have leftovers for camp for multiple days.
Top

Thank you! This is all very helpful. It looks like there's a lot to explore and ample camping possibilities. I think we'll bring mosquito nets--sounds bad.
Top

cfm wrote: ↑
June 2nd, 2020, 7:11 pm
Hager Mountain Lookout. You can drive up the LO road, and make it a shorter hike as I did with my son about a decade ago. Places to car camp along that approach road.

You wrote shorter hike, not no hike, but possibly things have changed?

There was a gate along the lookout road when we went. It was probably just a mile or so hike, but definitely a fun place to take a kid. There were also places to wander near our roadside camp and solitude. 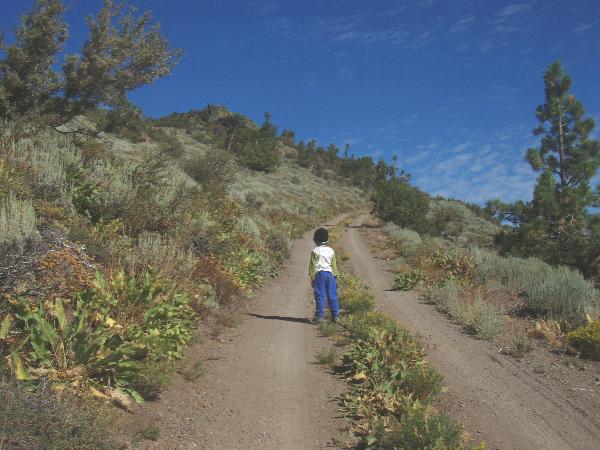 As a postscript, we spent three nights camping at https://www.fs.usda.gov/recarea/fremont ... ecid=59775, about fourteen miles outside of Silver Creek. It was slightly out of the way, and meant extra driving wherever we went, but it was empty and quite nice--shady, with a nearby creek that we could dip in when it got hot and a rocky point that we could climb up to for views. It rained for the first day and a half, but Summer Lake offered fantastic birding and the scenery in general was spectacular. We went to Fort Rock, hiked Crack-in-the-Ground, birded at Cabin Lake and explored the sand dunes near Christmas Valley. We couldn't find Hole-in-the-Ground, though we were on our way home and pressed for time, so we gave up after a short while.

We didn't go into any stores or restaurants save for one time when I went into the gas station in Silver Lake and bought the boys some ice cream sandwiches. I felt very shy to wear my mask because NO ONE is wearing masks down there or seems to have any idea that there's a virus going around, but my sons insisted. After I paid, I said to the older woman behind the counter that no one seemed very worried about the virus, and she said, "That's because no one down here has it. Hard to be worried about something you never seen." I understood what she meant, and maybe some things about the state of affairs in general.

At any rate, it was a great trip and I look forward to going back. Thanks for the information here.
Top

Looks awesome! Glad you had a good trip! Hole in the ground is not that exciting, so you didn't miss much and hit the best spots first.

Don't be shy about wearing your mask. Best thing you can do is lead by example. Especially now that more people are traveling! Of course we can't see viruses

Will break trail for beer.