In a particularly inhospitable section of Mt Hood, between Paradise Park and Illumination ridge, I was shocked to see a critter walking around way down at the bottom of a steep crumbly snow-bottomed gully. No mammal had any business down there! It had a canine look to it, graceful and quick, long legs. I was able to fish my optical assistant out of my pack by feel, while keeping an eye on my subject. Got a pretty good look before he disappeared up the gully. Almost certain it was a coyote.

Are you as surprised as I was? I've seen alpine coyote before, but rarely, and never in a place like this.

You won't be able to spot it in the pic below. Picture is just to show the site.

Neat sighting. Could it have been a young wolf? They have been sighted in MHNF and there may even be a named pack now. Makes more sense to me than a coyote at that elevation. On the opposite side of Hood at a similar elevation, I saw a canid animal, which I later learned was a Cascade Mountain Fox, black morph. Had the smooth graceful flow you described, but perhaps smaller than what you saw?
Top

I suppose it was the looong legs and ears that made me think Coyote. Didn't get a really good look, but it seemed distinctive. I don't know much about such things, just going by what I've picked through the years.
Top

I saw a coyote at about 12,000' on Mt. Whitney a couple years ago, well above any significant vegetation. 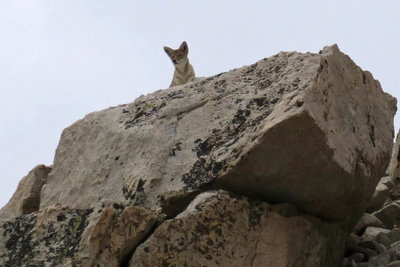 acorn woodpecker wrote: ↑
August 11th, 2019, 8:10 pm
Neat sighting. Could it have been a young wolf? They have been sighted in MHNF and there may even be a named pack now. Makes more sense to me than a coyote at that elevation.

Yes, but it would be very unusual for a wolf to be traveling solo in the summer, while it is common for coyotes to do so. Wolves are pack animals. Coyotes are not. The White River wolf pack is likely still on or near the Warm Springs Reservation until the fall. Wolves spend the summer at a “rendevous” while the pups born in the spring learn to hunt. During this time they are pack animals. Later in the fall some young males will strike out on their own to look for mates. Wolves have even longer legs than coyotes, but given that it was solo this time of year, I think this must have been a coyote. Too bad you didn’t get photos of tracks in the snow, with something in the photo for scale.
Top

The far moraine wall in my pic gives a sense of how rugged the terrain was. Maybe I could have found an easy way to drop in somewhere, but the weather was miserable, and I was focused on getting out of there safely.

Imagine me as a witness in a criminal trial. "Yes, the defendant absolutely was the man I saw at the crime scene. I'm sure of it. Maybe. I guess. When do we break for lunch?

I saw a coyote in that area about five years ago while I was doing a Timberline Lodge to Mississippi Head to Paradise to Zigzag loop. It was a about an hour after sunrise. It was yelping and moving along just like I'd expect it to.
Top

I saw a coyote walking up the trail past Dollar Lake. A little vegetation there, but he was going up above.
Top

Methinks you saw a coyote that likes to climb mountains. Why not?
Top

You won't be able to spot it in the pic below. Picture is just to show the site.

I really think you should look again.
"When we try to pick out anything by itself, we find it hitched to everything else in the Universe." - John Muir
Top
Post Reply
12 posts