Ive decided I want to expand my photography theme for the summer and want to include abandoned roads as well. I know theres alot of great sections of the Columbia gorge highway, found a section of the mt hood highway on google, and a collapsed old road in Oregon City.

Anyone know of any other really good ones? (paved). Would be better if I had to hike a good ways to find them.
Top

A collapsed old road in Oregon City? Do tell.....That is a new one on me!
Life is not a journey to the grave with the intention to arrive safely in a pretty and well-preserved body, but rather to skid in broadside, thoroughly used up, totally worn out, and loudly proclaiming: WOW-What a ride!
Top

If its the same collapsed old road in Oregon City that I'm thinking of, it's short, but still a nice stroll in the woods. It starts at an awesome viewpoint and goes downhill from there. I'll post a map later if I can find one. If there's a different one, do tell

mrmagoo wrote:Anyone know of any other really good ones? (paved). Would be better if I had to hike a good ways to find them.

There's an old section of SR-501 falling into the Columbia River, just south of the Ridgefield Wildlife Refuge. You don't get much of a hike to it, but you can walk over a mile along it before running into a restricted zone. Makes for some interesting photos on a long lunch break.

To get there, go to Frenchman's Bar county park, and continue north until you hit a parking area where the road is closed off.

The one I'm thinking of is called Waterboard Park Rd.

There's a crummy pic of the viewpoint on that page too, but u can generally see how good it is.
Clackamas River Waterfall Project - 95 Documented, 18 to go.
Top

Just remembered another one in Oregon City. It's the old railroad bed that was a road til the 1996 floods. It's up on the hill and a nice forest walk with no houses in places.


The road labeled McLoughlin Ave is part of the old Willamette Valley Southern railroad. The abandoned part is where the road curves around the park between 18th and 16th. The only parking for it is where 17th and 18th meet on the right side of that map. It's longer then it looks.

There's the old segment of the Mt. Hood Loop Highway by Laurel Hill. Going up Highway 26 you park at the Laurel Hill historical marker, take the steps up the hill, and you're on the roadbed of the old highway. You can walk up it for about half a mile or so before it comes back to Highway 26 near the Mirror Lake TH. (Although you can't tell in the photo below, the pavement is still intact.) 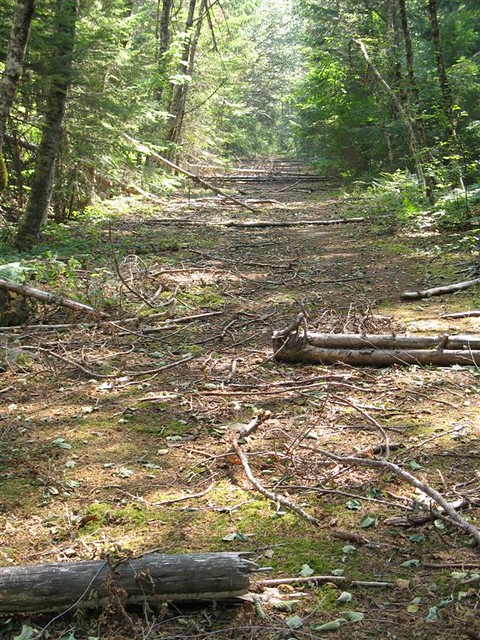 There's also a short section of that same road on the other side of the highway. Drive to the TH for Zigzag Falls and you'll see where the old road crosses the river and keeps going. 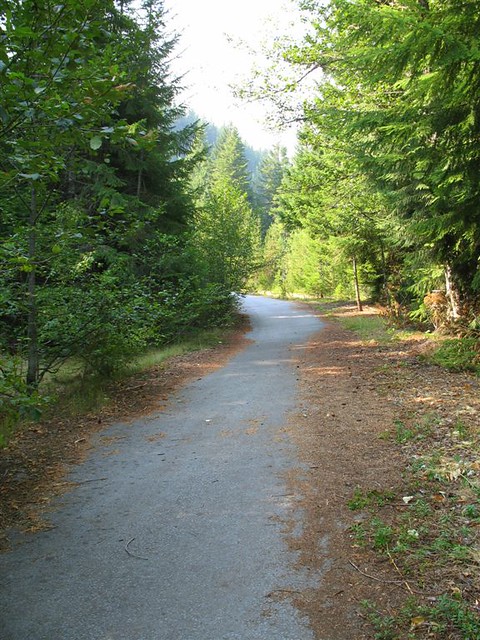 I just thought of two more. When Greg and I visited Camp Benson Falls in the Gorge we came across an abandoned section of the Columbia River Highway. I'm not sure how far that particular abandoned segment goes, but you can find directions here: http://www.waterfallsnorthwest.com/nws/ ... p?num=2804

The second one is Road 255 down in the Clackamas Ranger District. Usually when FS roads are decommissioned they tear up the pavement, but they didn't on this one. More here: www.portlandhikers.org/forum/viewtopic.php?f=8&t=13028
Top

I went out today to take some pictures of the two abandoned paved roads in Oregon City that traverse forested areas along the famous OC Bluffs.

First one was the former McGloughlin Ave. This road was open til the 1996 floods caused a big landslide nearby. The road wasn't taken out, I think it was just a precautionary situation.

Starting at 18th and Jackson st, me and my son headed out.

Reached the other end of the road

Almost back at the car

After this, we headed to Waterboard Park, and hiked the longer and much more collapsed abandoned road that switchbacks down the bluff area.

We first visited the top, where the road begins at a viewpoint.

Approaching the Viewpoint in the car

From here, we drove around to the bottom of the road and decided to hike up

100 ft past the barriers

Halfway up the old road, it makes a nice horseshoe bend

The source of the washout, now a big cliff area. The black area on the upper right is a cave.

Up on that cliffy area is a cave that I used to crawl around in as a teenager. We climbed up to it, only to find it completely full of graffiti and partially collapsed. But the views back down to the collapsed road are decent.