Chat about non-hiking topics. The least serious of the forums on the site!
Post Reply
26 posts

I've seen a couple in central Oregon but I've only heard stories of them closer to the valley.
GPS Tracks
Top

Lurch wrote:I've seen a couple on Angels Rest, and a few up in the desert

Now you tell me! I was up there on Monday. Next time, I can assure you that I'll look a bit closer before I sit on those rocks!

This scorpion was sitting under rocks of a fire ring, and went out as I was tending a fire (Eagle Creek, 7.5 mile camp, last summer). 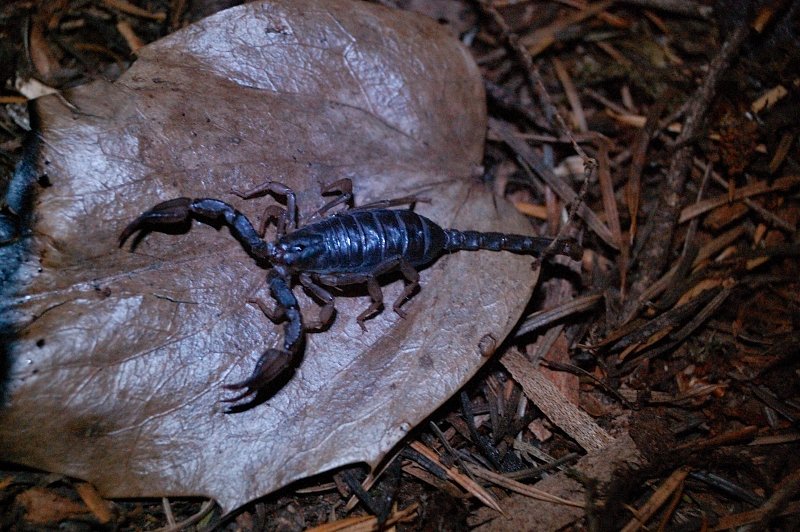 Titogoeshiking wrote:Sorry about killing it but I just didn't want this thing in my yard

. I am not brave enough to relocate the thing because it was just simply to evil, and fast. When I bumped the paper bag with the axe it started running and whipping its tail around. Then it was smash time.
The one I found on Gold butte I left alone to enjoy the healthy environment.

Let that be a lesson to all spiders and scorpions LOL. I have relocated a few spiders from my home but will admit, if they startle me, they take their chances.
"When we try to pick out anything by itself, we find it hitched to everything else in the Universe." - John Muir
Top

Peder wrote:Yes - As I recall there have been several reports of people running into scorpions around Angels Rest on PH. Nighttime encounters seem far more likely - I would love to see one!

NO!!!!! I love to hike late in the day, and often finish after dark with a headlamp.

I used to have a lot of business travel. When working in Silicon Valley, I often went running in Plasencia Park. Nice dirt trails, great views over Silicon Valley to San Francisco, beautiful sunsets, and a nice smooth paved road to run back down after dark. One day I finished work early, so before running I decided to check out a big reader board in the park. Turns out the park is a wildlife refuge for tarantulas!

But the sign said not to worry, they are nocturnal, and don't come out until sunset. I never ran there again.
Top

Just found this little beauty in my tent bag as I was packing up from Raab campground on the Collawash river near Mt. Hood. Shook it out and thought it was dead until it picked itself up and started crawling down the picnic bench. Relocated it to a wood heap upstream of the campground.

I have encountered scorpions in Oregon. The first one I saw was in my home in Southern Oregon in the Cascade Mountains just south of the small town of Prospect, Oregon.

I have seen others, believe it or not, in decayed logs in the Coast Range of Oregon, and in firewood I have stored at my current home in the Southern Willamette Valley near Eugene, Oregon.
Top
Post Reply
26 posts