We've had a few days of nice winter weather and for the those of us who have been able to get out and enjoy the views in the gorge and elsewhere I thank you for the TRs.

I will contribute a few photos of winters past for your vicarious pleasures.

Last Sunday, the first little bridge at the start of the Eagle Creek Trail:

And here is a real blast-from-the-past: The house I grew up in, in the Irvington area of Portland. I took this photo at the end of Dec., 1968 and after hearing that the snowstorm of 2008 was worse than that one, I drove by my old home to take the next photo. I remembered more snow that winter of '68 than any I had ever experienced. I was really into weather then and recorded an 8 degree low that morning and a 13 degree high. (Possibly the lowest ever in Portland in the 20th century) The east winds hit 80 mph in east county and about half that in the rest of town. As I remember it, a couple of duck hunters died of exposure on one of the islands in the Columbia that day and even the coast guard was unable to get to them in time.

1968 at the I84 Fwy overpass just east of the bridge at Troutdale. Is that a snowdrift, or what!!

20years ago, as the snow and ice melted in the Eagle Creek canyon a giant bolus of ice, trees, etc. rolled down the creek and took out just about everything, including the cable bridge. Here is what it looked like after the event:

I took one of my nephews on a hike up Eagle Creek that winter and here is what it looked like at High Bridge. We could not get past this point as the ice sloped towards the cliff edge and the ice formations were way too big to get our arms around and of course, the cable was simply way too covered in ice to get a purchase on.

Stopped on the Scenic Hwy in Dec. 1985 just east of Multnomah Falls:

Same day as the previous, looking west from the Multnomah Falls parking area:

I think we had some anarchy just a few week ago, but that was for a different thing!

I remember shoveling huge drifts of snow blocking the door.

And the backyard filling up with fir branches after the Columbus Day Storm.

Yep, the good old days... well, I hear were going back to those great days...
Top

Oh wow! Thanks for the cool photos. Those Eagle Creek ice and snow shots are INSANE.

This is a fun winter photo I found in the Mt. Hood National Forest archives, although this location cannot be in that particular forest based on the mileages on that sign. Somewhere in the Umpqua NF, I'd guess. The date on the back said 1945. 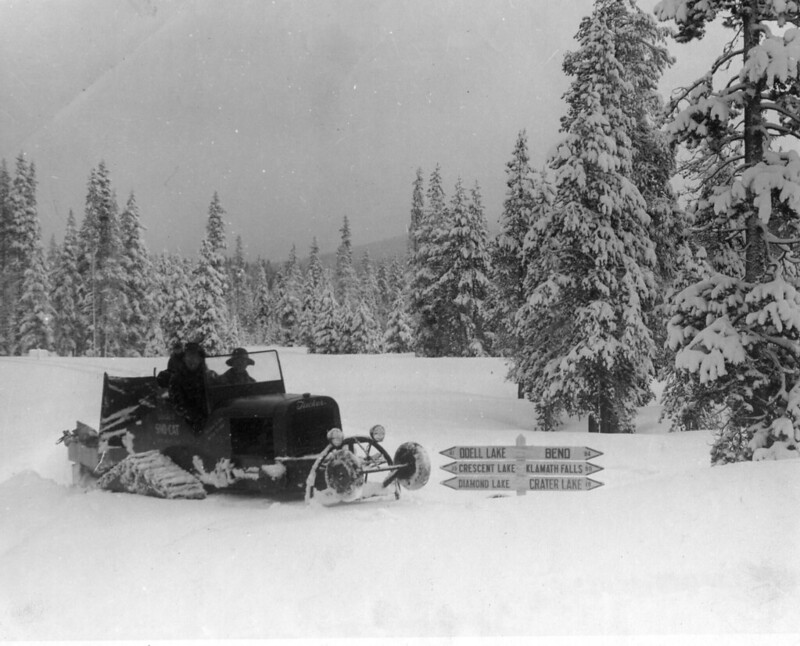 Thanks Don for the nifty photos. 2008 was quite a year for snow in the Gorge.

of course I was there backcountry skiing. Probably the only time I will ever get to ski Mt Tabor.
lightweight, cheap, strong... pick 2
Top

Thanks everyone for the nice comments and the photos!

At my home in Vancouver about 9 or 10 inches fell and then about a 1/2' of freezing rain. Then we got another 10 inches or more of snow. I had fun with that layer of freezing rain, plucking it out from the middle of the snowpack and turning it into this:

Driving across the Broadway Bridge, Dec. '08

Driving into the downtown area:

The back of my car after all that abuse, parked across 10th St. from Powells:

Great photos everyone. I really love the snow cat, been a few times I could have used that just to get out of my driveway.
Top
Post Reply
9 posts • Page 1 of 1