by justpeachy
I came across this old brochure called "Trails on the Slopes of Mount Hood" from 1939. It has a map of the Mount Hood area and a list of landmarks along the Timberline Trail. If you're a map geek or history nerd the map is especially fun to study! 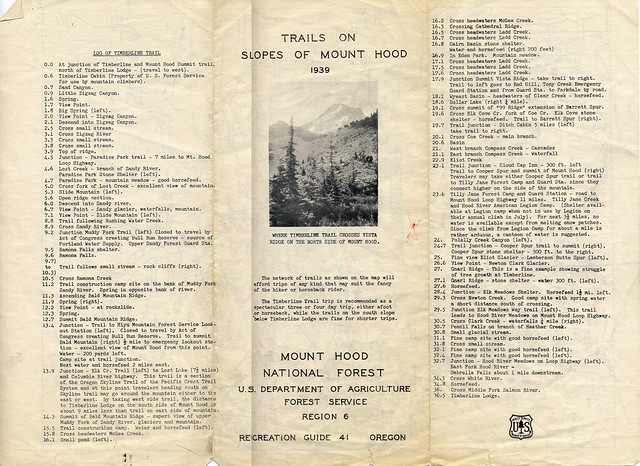 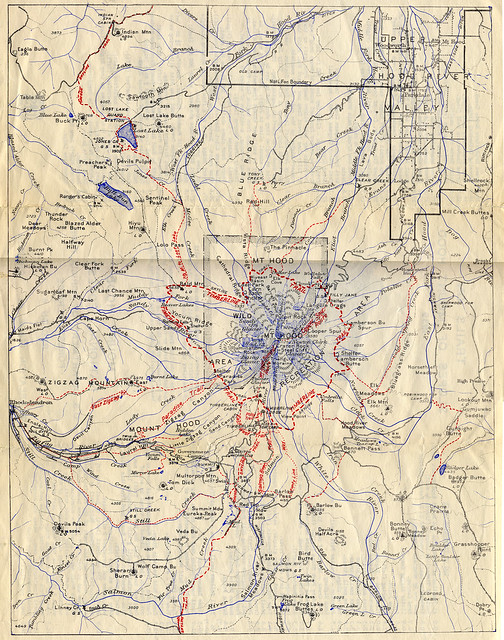 by raven
Wonderful find. A lot of lost trails on that map that I don't remember seeing on other maps. Of course, some of them will be hard to even imagineer due to fires, roads and clearcuts.

by retired jerry
Interesting, thanks

Regarding Timberline trail, there was no Yocum Ridge trail or upper Muddy Fork crossing then

It says there's water 500 feet to the left (downhill) from Gnarl Ridge shelter but I've tried and failed to find that. I'll have to go look again

by Chase
The 36.5 mileage number was accurate; the trail has changed course. The Muddy Fork bit of the late 70's/early 80's actually made the trail a little longer. But the bigger change was a sizable re-route in the Mt. Hood Meadows area (date unknown) which also lengthened the trail. I'm sure Splinty has more specifics on how the length of the trail changed over the years.


Interestingly, one of the two the men who initially measured the trail using a cyclometer were reported to be suspicious and it made the news:

HOOD RIVER, OR., Oct. 19.- (Special).-Members of the Timberline trail crews on Mount Hood a few days ago reported that they had seen, at a distance, a "crazy" man, pushing a bicycle wheel at the end of a stick along the new trail...

Thanks for the high-quality map, justpeachy.

by kepPNW
What a wonderful map! I love that old-style cartography. It's what we were still doing up through the early 80s, with perhaps a bit less hand-lettering. One of the last artisan practitioners (Phil Arnold) only died a year or so ago. It's so rare to see it done with a multi-color press run, though! Clearly, that was some "big budget" stuff, there! The contrast of typewritten copy on the flipside is just too quaint (said in a good way

Thanks for posting those!

by Grannyhiker
What a treasure! When I have time, I'm going to enlarge it and go over it in detail. I wonder if there is any chance of resurrecting the trails that have disappeared....

by Splintercat
Thanks for the nice, big scan, Cheryl!

If you're a map geek or history nerd the map is especially fun to study!

Wait... I have to CHOOSE..? I'm basically a nerdy historic map geek, after all...

by mjirving
Pretty cool! I was studying it and looking for Laurence Lake as a reference on the north side but couldn't find it. Then I realized it didn't exist back then as it is a dammed lake!

by Eric Peterson
Karl, can you geotag this?

Eric Peterson wrote:Karl, can you geotag this?