by justpeachy
I came across this interesting article by Lewis A Arthur in the Oregonian archives. It's from October 8, 1916 and he describes traveling from Government Camp down to the Olallie Lake area and then into Jefferson Park. It was quite an undertaking back then! 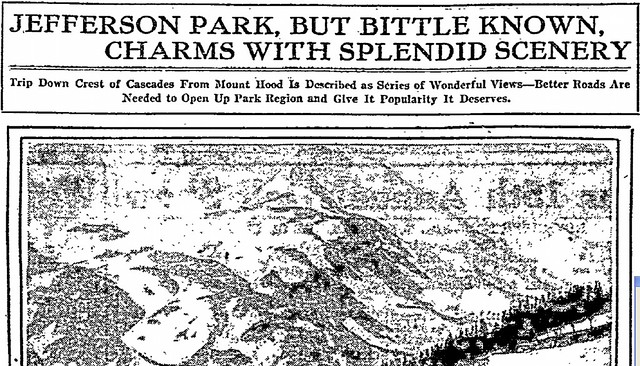 There are two means of approach to the park, one being by wagon road and trail south from Government Camp to Breitenbush Lake, and thence over a rocky and precipitous series of mountain ridges for a distance of over five miles. There is no trail here and progress is made only with difficulty. The snowfields are extensive and a good guide is essential.

The other way is by railroad to Detroit, and thence by pack train up the North Santiam River and Whitewater Creek. After leaving the mouth of the latter stream, the trail is poor and hard to negotiate. To get into the park either way requires real work.

Also interesting is how the tale of this trip took up an entire page of the newspaper. I’ve come across this kind of thing several times in the archives. Reporting was VERY different 100 years ago than it is now!

by BrianEdwards
I've seen photos of the train to old Detroit, before the reservoir flooded it. That was a very scenic ride.

Yeah, I couldn't figure out if that's some archaic word that's not used anymore or if it was a typo for "little."

For what it's worth, the Urban Dictionary has a definition for "bittle" that says "A joining of the words 'little' and 'bit' to make the contraction noun 'bittle'." It kind of makes sense, if you really stretch your imagination.

by Oregon Nomad
Would love to have read the article, but living in Bend I don't have a Multnomah county Library card.

Oregon Nomad wrote:Would love to have read the article, but living in Bend I don't have a Multnomah county Library card.

Whoops! Sorry about that. I thought the link I used was the permalink that doesn't require a login. Try it again.
All times are UTC-08:00
Page 1 of 1
Powered by phpBB® Forum Software © phpBB Limited
https://www.phpbb.com/