Don Nelsen wrote: That's exactly what happened to me. I was exposed repeatedly for over two decades with only a few minor blisters on my hands and then wham, I got hit big time. I'm very sensitive to it now and have to be very careful.

Catches up with us old farts eventually Don

Who are you calling an old fart, you old fart!!

I had a month long bout of poison oak, just wouldn't go away...finally had to go get some oral steroid pills. I couldn't figure out on which of my hiking clothes the oils were still lingering.

I suspect I may have picked it up by petting someone's dog while hiking. Dogs are pretty immune to it, but if they go off trail they can carry the oils on the fur.

I am one of those smug immune people, never noticed a reaction to it. I do try to avoid it and know what it looks like but I'm sure there are times I've been exposed.

I knew a smug immune person, breathed in burning PO, got a bad case and from then on was very susceptible.

Us smug immune people should be careful regardless

Damn, it got me again! Same place, gap between shirt and gloves.

At least this time I know where I picked it up. Timeline is clear; could only have been Cook Hill.

Strange that I had my second outbreak right after the first. I realize the first incident left me sensitized, but I doubt a little patch smaller than three postage stamps could radically increase my sensitivity, so this was probably just bad luck.

But either way, I definitely need to ramp up the precautions (not much left to do, but I'll need to go that extra 5%). I guess I could just stop hiking off-trail

I do recall seeing some bare twigs that looked like PO, and I know I made contact, but cleaned up after contact (maybe too little too late). So far my rash (both arms) is pretty small, so hopefully my cleanup efforts kept it to a minimum. I'll know for sure in another day or two.

Reminds me of my tick history: never saw a tick in my life until a year or two ago, and after that first experience they were everywhere!

Man, I remember when the only post-hike suffering I encountered was mosquito bites, which were pretty seasonally-specific and easy enough to deal with.

Oh, BTW, my first rash cleared up nicely. For a while there it was so blistered and scaly that it was hard to imagine that spot of skin would ever look healthy again.
Top

There may be another possibility: The route you took north from Aldrich goes through an unavoidable section of PO right after the saddle between the butte and the ridge. It's surprising how virulent that stuff can be even though the leaves are down.

Hey Don, thanks for the feedback, but I'm sure it was Cook Hill. By the time I was on Aldrich on Saturday, I already had some hints of itching/swelling. Blistering started early Sunday, I think, far too soon to be caused by Saturday exposure. Anyway, I didn't see any suspect brush on Aldrich to Table. I did way more schwacking than expected on the Table "winter route" (cliff edge), and didn't even think to don gloves. Fortunately, I'm told there's no PO up that high on table.

And yeah, it is interesting that I've been bitten twice now by bare stems, but the fresh oily spring leaves have never gotten to me.

Anyway, I think I lucked out. My blistering isn't spreading like it did last time, staying confined to a few tiny zones, so I'm thinking this second exposure is just acting as a reminder/warning.
Top

Chip Down wrote:Fortunately, I'm told there's no PO up that high on table.


Chip Down wrote:And yeah, it is interesting that I've been bitten twice now by bare stems, but the fresh oily spring leaves have never gotten to me.

The fresh oily leaves are a LOT easier to avoid!
http://adamschneider.net/photos/
http://www.gpsvisualizer.com/
Top

Just for fun, here's all the poison-oak observations in the Oregon Flora Atlas, colorized by elevation: 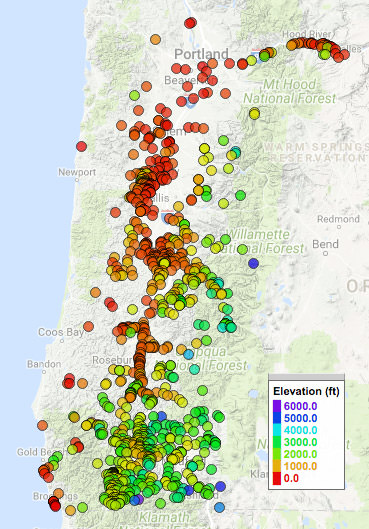