I saw another one of these mystery trees this weekend, near Sunriver on a little lava knob called Pistol Butte. This is a Ponderosa pine.

Another pic for reference.

Raven, I like your idea of a tree rubbing alongside it and gradually falling down, but if that's the case then wouldn't all the lines be pointing radially inward to the base of the tree that is falling? You'd need 2 trees to get the checkered effect -- but my point is that the slope of the lines would be different at different heights.

Potato, you are correct. Blows my hypothesis out of the discussion. Good catch.

That is, the lack of appropriate angles refutes my hypothesis, not the cross check pattern. Winds could both twist and move two trunks against one another, generating a cross pattern as the winds blow from different directions. However the cross patterns on every example look too similar to me for that explanation to be worth much in practice.
Last edited by raven on March 7th, 2013, 10:12 pm, edited 1 time in total.
Top

What I find unique is that the scars arent really scars but extrusions or swelling...

Sometimes I think it has to do with the way the bark may have fallen off the snag after the tree died. If it fell off in sections over a long period of time, then rain/water might accumulate on the top side of the the still attached portion of bark and water runs downhill so thus diagonally it would seep into the wood there (until that portion of bark fell off) and cause it to swell up... only later to dry preserving the mark. then a section of bark would fall off and the cycle repeats.
lightweight, cheap, strong... pick 2
Top

My best guess is that it has something to do with how a tree forms its limbs. I did a quick search of the internet and found another tree with the cross hatching marks. http://www.footprintsandphotos.com/wp-c ... W00701.jpg
Notice that at the center of many of the cross hatches on this one, there appears to have been a small branch that had formed, grew some, but then died away before it grew very large.
Could it be that what we are seeing are the "roots" of a tree's limbs? After the tree died, lost its bark, then sat there in the sun developing its nice bleached color, the wood of the tree could have shrank a little, except for the limb "roots" which are harder wood and not able to shrink as much?
Just a thought, but probably way off.
Top

Koda, interesting theory, that could explain why it's swelling outward... but it looks to me like some of the marks are overlapping, and I'm not sure how that could happen?

Maybe when the tree died, the bark had channels on the inside in the pattern that we see here. And water would seep inside like you're thinking, but only in those channels, and at some point all the bark fell off. Anyone seen recently-dead bark on the ground that has a crisscross pattern on the inside?

EMTStolz, another good idea, and it does look like sometimes in the center of the X you can see that a branch used to grow there. And maybe branches do grow in pretty regular intervals sometimes -- regular enough to create that pattern. My question would be, why don't we see more trees like this then?
self observing universe (main blog)
Joe hikes (PCT blog)
Laws of Nature (bandcamp)
Top

I'm going to post a couple of these pics on a couple of plant / tree forums that I belong to & see if anyone has any ideas.
hiking log & photos.
Ad monte summa aut mors
Top

I found another Argyle Tree!

This one was lying on the bank next to the pool below Toketee Falls a few weeks ago:

No clue what kind of tree it was when alive; there's a wide variety around there, including pines.
http://adamschneider.net/photos/
http://www.gpsvisualizer.com/
Top

I've been to the base of Toketee a few times and never noticed those marks on that tree. I guess I should be more observant.

I wonder if it's a variation of whatever causes this: 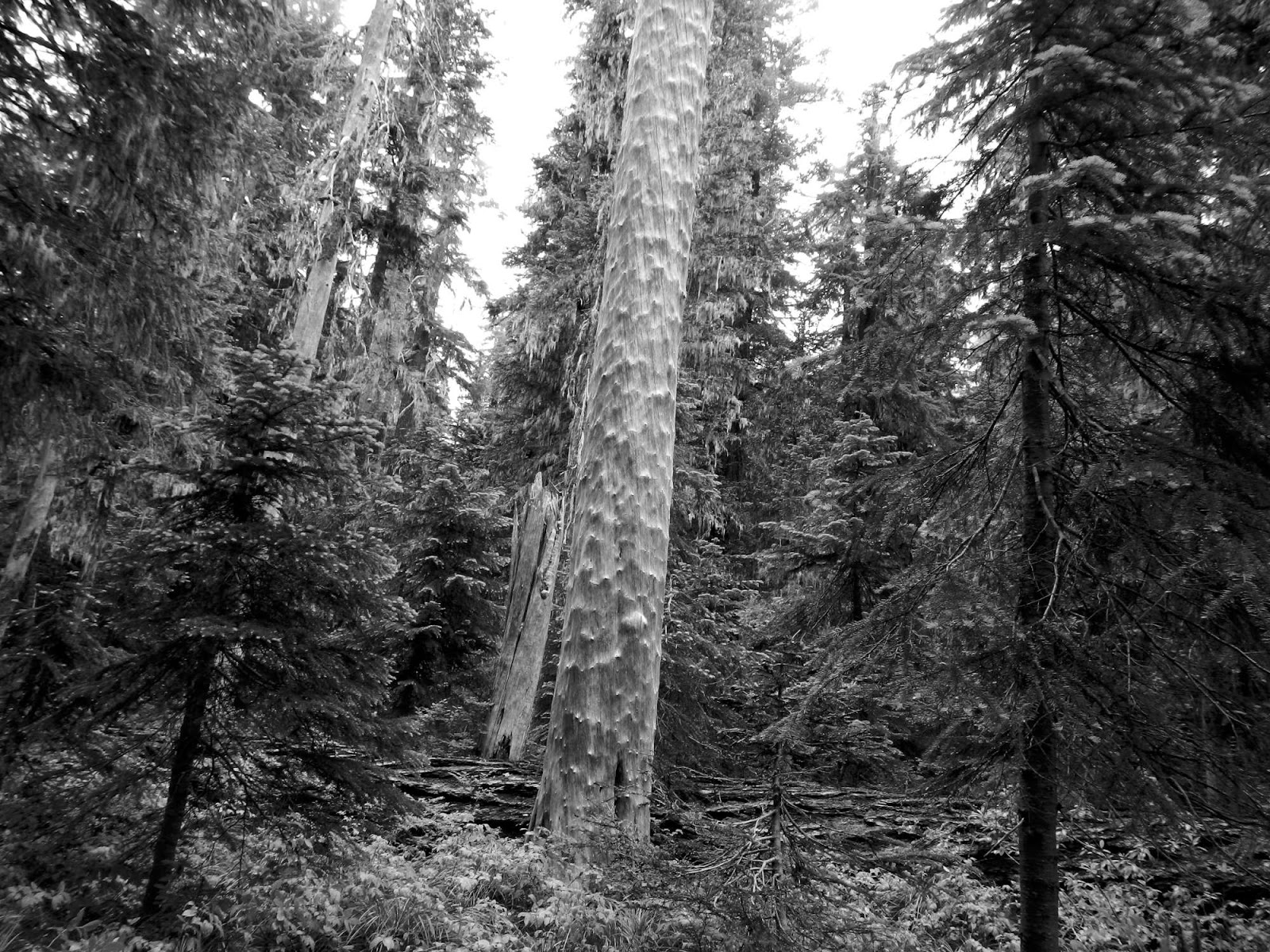 (they couldn't figure it out either)
Top
Post Reply
43 posts