I'm trying to teach myself to ID conifers. Assuming you cannot see the needles, which trees are these? (Seen in Indian Heaven adjacent to each other, both ~ 2 ft diameter.)

While we're on the subject - it seems like a huge amount of that forest is hemlocks, I'm guessing mountain hemlock since the needles stick out in all directions? There are also a surprising number of pines mixed in - I'm guessing western white pine for the long needles and long banana shaped cones, and whitebark pine for the shorter bottlebrush needles and smooth bark?
#pnw #bestlife #bitingflies #favoriteyellowcap #neverdispleased
Top

I don't know bark, but you're right about the pines and hemlock. All of Indian Heaven is high enough (and east enough) that I'd be surprised to see western hemlock there.
http://adamschneider.net/photos/
http://www.gpsvisualizer.com/
Top

I am trying to do better with tree ID myself, and I have found that it's pretty challenging to identify a tree on bark alone. It's hard to see the needles for the big tall trees, but if I can find the tree's cones on the ground that helps with ID.

I recommend a book published by the OSU Extension Service called Trees to Know in Oregon. I find I can actually use the keys in this book with some measure of success.
Top

FYI, the smartphone apps from WildflowerSearch.com work offline and include trees. They don't always go into fine-grained detail about bark texture, but they'll at least give you a list of the possibilities in your location, along with range maps and lots of links for when you do have cell service. 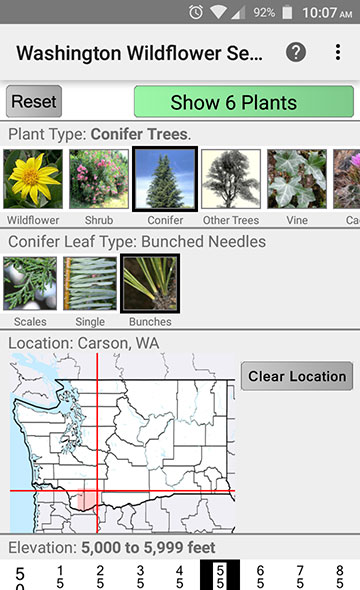 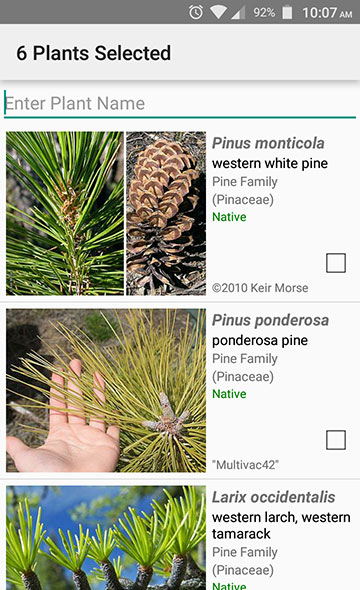 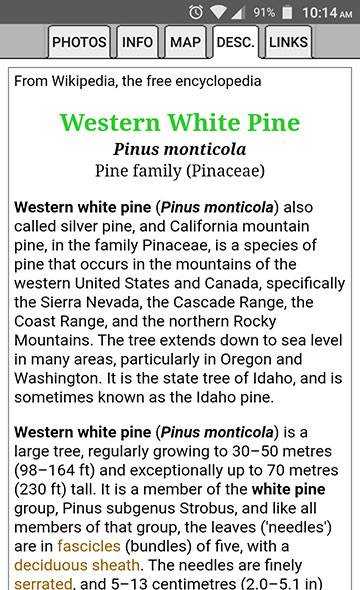 I'm been amazed at how bark of some trees, notably the two common ones - doug fir and alder, can vary and look like other species.
Top

Indian Heaven is typical montane forest for that area. At those elevations, it's mountain hemlock, silver fir, and noble fir. Douglas-fir is common around the trailheads. Engelmann spruce is mixed in - there's a lot up near Cultus Creek Campground. Western white pine is dispersed throughout (long, skinny cones on the ground) but there are also ponderosas here and there (long needles). If there are whitebark pines there (I don't recall seeing any), they will be up in rocky exposed areas on the peaks. There are also lodgepole pines around Indian Heaven, especially burn areas a few decades old and recent clearcuts.

The photos are of fir bark, noble or silver I'm not sure. Could be the same species for both, different ages. I'd bet on the silver for the top one, either one for the bottom. The bark of bigger, older trees is more easily recognized.
Top

adamschneider wrote: ↑
October 28th, 2019, 9:02 am
FYI, the smartphone apps from WildflowerSearch.com work offline and include trees.

Thanks for the recommendation. I just downloaded it and can't wait to use it next time I'm out exploring!
Will break trail for beer.

Second shot looks like noble to me.
Karl
Back on the trail, again...
Top

Thanks for the recommendation, Adam, I'll look into that app. John - I will have to check the number of needles per bunch on the pines next time I'm up there, since it seems like that is the easy determining factor (aside from the whitebark cones). I was surprised how many pines there actually were once I started looking. Trees are something that have always been in the background as a homogenous mass - now that I'm paying attention it's obvious how much variety there is! Probably how other people look at rocks.

While we're playing this fun game, the wind blew some branches off a nearby conifer the other night and they landed in my yard. My ID is douglas fir based on the 3-point bits between the scales on the cones (bracts, I think?) and the hockeystick needles with rounded tips in a bottlebrush configuration all around the twig.

I don't even know what Doug-fir needles look like, but the cones are unmistakable. No other cones have those little pitchforks in them.
http://adamschneider.net/photos/
http://www.gpsvisualizer.com/
Top
Post Reply
31 posts