I saw this New Years Day, just above the Swift Reservoir, on the Lewis River. I saw perhaps 5 similar pieces that day. I have seen it a couple of other times as well. The scene is that there is a small piece of a branch, old, obviously water soaked. It got cold during the night (in this case, perhaps 25 degrees). The freeze seems to squeeze the moisture out of the wood, and it grows extremely fine ice crystal hair. On this one, it even had waves, just like a little kid with longer hair. The hair was so fine, that I could not even feel it when I lightly touched it.

So, I guess my question is: does anyone one know if this phenomena has a name?
Kelly
There is no shortcut to anyplace worth going to. 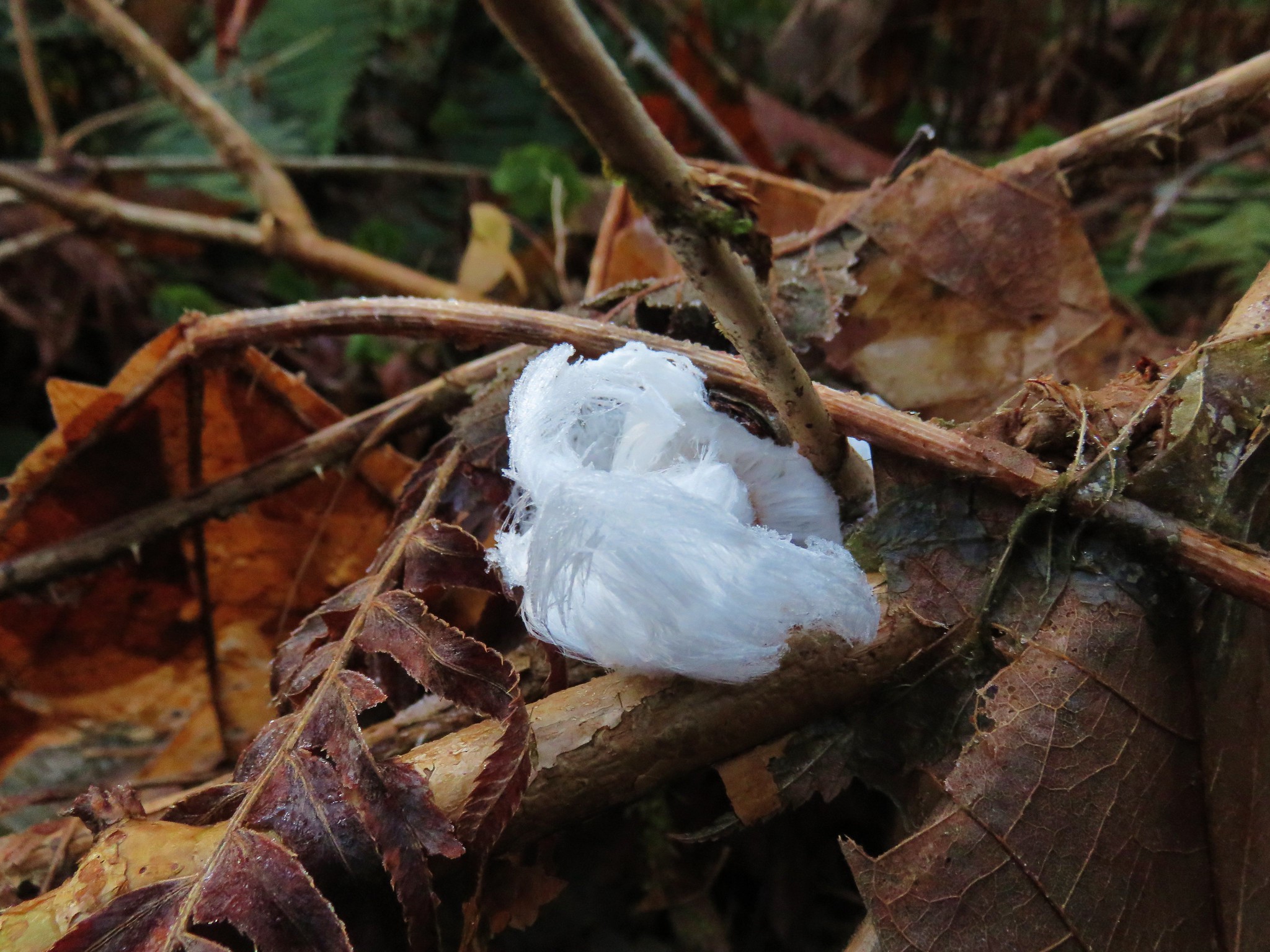 Silk frost or feather ice. I've seen it only on alder and only when the temperature is barely below freezing.

Explanation, other links and photos here:

I am pretty certain that the wood that I saw my specimens on was indeed alder.

I should have just assumed that Don would have the answer!
Kelly
There is no shortcut to anyplace worth going to.

Maybe the water comes from the air, not the piece of wood?

This is one thing interesting about winter hiking, lot's of weird ice effects
Top

I am assuming that it comes from the wood. If it grew from air moisture, there would be many feathery branches because that is the way that moisture condenses out of the air to grow an ice crystal. The actual mechanism is still puzzling.

I have seen similarly puzzling ice crystal growth from the ground. There are vertical parallel needles of ice. This form obviously grows from below because it can lift soil debris upward - leaves and such. I've seen this form of ice several times over the years, though not recently (probably more of an indicator of WHEN I have been out). One time with the ice over a very large area was on the PCT heading to Mt. Washington in early November. No significant snow had yet fallen and it was just "bloody cold". I suspect that this form requires a certain amount of soil moisture. It seems to happen only on mostly bare ground (such as the trail) and is absent from ground with duff on it (probably too insulating). The cases of this I remember had needles typically 1" to 2" long but rarely longer. Maybe, at that length, the soil moisture that can freeze has been depleted?

On that particular trip, now many years past, the leader was an OSU Forestry student who was also a USFS employee. We stumbled on a jeep that had come through the church camp and was on the PCT inside the wilderness. The leader read the riot act to the driver; wish he could have done more - they were stupid.
Top

I saw this on a Jan 1 hike LAST year. We did some googling and found the following info:

And this BBC article which actually shows a time lapse of it growing:

Very interesting stuff - I had never seen it before.
Life is not a journey to the grave with the intention to arrive safely in a pretty and well-preserved body, but rather to skid in broadside, thoroughly used up, totally worn out, and loudly proclaiming: WOW-What a ride!
Top

Rob, thanks for including those links. Fascinating stuff! If the hair diameter is in the neighborhood of 1/2 thousandth, I would really like to see the micrometer that they used to measure it with....

Just to chime in with some more specimens found in the vicinity of Wahkeena Springs on Jan 2nd...

There were also some nice icicles and plenty of needle ice.
Top
Post Reply
13 posts