Or just hold the phone upside down, then when you're done, go to edit and flip it over..
Clackamas River Waterfall Project - 95 Documented, 18 to go.
Top

kepPNW wrote:Bizarre what it did to your wife! How many images did it put together for that? I've had trouble doing more than a handful, at times. I think the actual (free!) software you need to download is Microsoft ICE, right? Sometimes, with the better ones, I'll upload them to Photosynth to allow that interactive zoom/pan thing.

It's quirky, I rarely get smooth edgeless panos, but on the other hand you can get nearly 360 degree images which is pretty fun. I think of the weirdness as part of the aesthetic. You can keep coming back to a section and recapturing the image, it'll sort of paste that one on top of the other ones. I think in my example she moved as I was slowly turning around so some shots didn't have her present at all.

Here's my own lower Deschutes River valley photo from the spring: 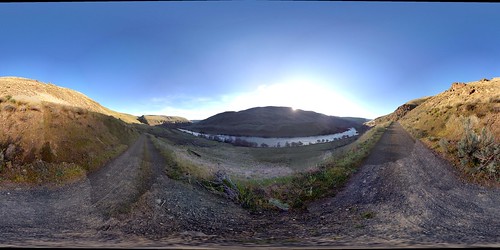 On my iPhone 4S the app is called Photosynth. ICE appears to be the (Windows-only) desktop app that one could use to knit together individual shots into panos, and it's the same technology that drives photosynth. It's free.

iOS Photosynth app:
https://itunes.apple.com/us/app/photosy ... 65256?mt=8
There is also a version of Photosynth for Windows smart phones.

Wikipedia on the technology
http://en.wikipedia.org/wiki/Photosynth

So far as I can see from brief research today, you can view Photosynth files in "VR" mode on your desktop or smart phone, but right now only the newest browsers support the WebGL and HTML5 properties that let you actually put one of these on the web. Of course you can use the MS Photosynth site to host them too.
Top

Ok, now I see what all the excitement is about....I installed one of the few free Pano apps available on Andorid called HD Panorama and its really a fun way to take panos. I'd share the test photo but the view behind my home is nothing to write about, I'll keep this app in mind when I get out on my next adventure..... which might be a while.
lightweight, cheap, strong... pick 2
Top

Just set off the install! Will try it out tomorrow on the trail.

What a fun thread.
"When we try to pick out anything by itself, we find it hitched to everything else in the Universe." - John Muir
Top

A few new ones from yesterdays adventures..

Here is one from the deck of Carpenter Mountain Lookout.

My list of lookout tower sites I have visited. Enjoy!!
Top

My list of lookout tower sites I have visited. Enjoy!!
Top

Alright, Jamey - that seals it: I have GOT to get down there to see Wolf Rock (and meadow) this year! What a cool monolith!

A few more from yesterday, on a few explorations off Bennett Pass Road -- Camp Windy meadows, looking down the Boulder Creek valley with Echo Point in the distance:

One of the rock outcrops above Badger Lake (Lookout Mountain in the distance):

...jumped out to capture my SUV coming through the "jaws" that lead to the Terrible Traverse:

That's such a cool spot!


splintercat wrote:...jumped out to capture my SUV coming through the "jaws" that lead to the Terrible Traverse:

Indeed, Brian. I had a bit of a rough passage through there about four years ago, and swore it off for life... but then decided this year to get past that and give it a go this year. I've traveled it in both directions, including STOPPING in the middle at the tiny little pullout... just to sort of purge my bad memories from that nerve-wracking earlier trip. Seems to have worked, too! I love that old road, so I wasn't willing to write it off after one bad experience!

BTW, about 10 minutes after that pano, I encountered another small SUV that was less sturdy than mine -- the young couple inside asked how far to "the main road" and I warned them about the Terrible Traverse... hopefully, they did fine! The guy was driving, which meant that his female companion was on the "cliff side" going through that section... I suspect she kept him scraping the fenders on the rock wall on the drivers side all the way through..!