Use this forum to post links to news stories from other websites - ones that other hikers might find interesting. This is not intended for original material or anecdotal information. You can reply to any news stories posted, but do not start a new thread without a link to a specific news story.
Post Reply
128 posts

yeah, expense was your big issue Keith, you must have effectively made your argument

I'm going to guess I've spent 60 days in Three Sisters Wilderness. Once, a ranger asked to see my self issue free permit. A couple times I passed a ranger that was doing trail maintenance that said "hi" to me.
Top

The original proposal envisioned the permit system as creating a revenue stream capable of supporting a budget for new staff who would help help with both education and enforcement efforts. From what I can see (and I've only seen this thread, not an official press release) this revision of the plan doesn't provide the USFS for Willamette NF and Deschutes NF with any new revenue at all. With 79 trailheads and hundreds of thousands of acres to cover, their chances for effective enforcement are roughly nil. Except perhaps in those few high-volume, high use areas that we tried to tell them were the only sensible place to put quotas anyway.

[sound of Charley banging his head against a wall]

Sometimes I feel like America is slowly feeding itself into a woodchipper, one leg at a time. We've got a million problems, and the only thing we can think to do is make all of those problems a little bit worse, gradually, all the time. We are cannibalizing our own country, in matters both big (following our Constitution) and small (such as crowding on several trails in one rural western state).

Watching all of this happen to my home country is probably the most demoralizing thing I will ever see in my lifetime.
Top

retired jerry wrote: ↑
February 7th, 2020, 9:50 am
I'm going to guess I've spent 60 days in Three Sisters Wilderness. Once, a ranger asked to see my self issue free permit. A couple times I passed a ranger that was doing trail maintenance that said "hi" to me.

I've been asked for my free self-issued permit once, at Moraine Lake (Sisters wilderness).
I don't even do that anymore. If I'm ever asked again, it's hard to say what my response might be. Will depend on my mood, I suppose.


Charley wrote: ↑
February 8th, 2020, 1:39 am
Sometimes I feel like America is slowly feeding itself into a woodchipper, one leg at a time. We've got a million problems, and the only thing we can think to do is make all of those problems a little bit worse, gradually, all the time.

You have a way with words, Charley. Thanks for that post, made me smile. (It's not funny, but what else can a guy do?)
Top

regarding self issue permits: pull the form, fill out your version. burn/destroy/hide the piece the FS is supposed to get. fold up the one you're supposed to have and put it in your pack or pocket somewhere for the rare situation they'd ask. 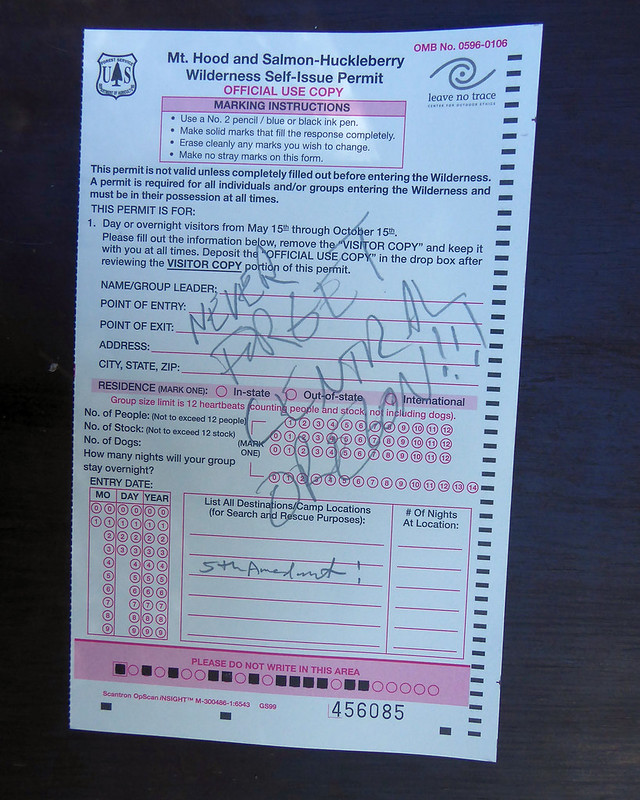 precisely, if you remove the data they want to collect, it will show them the exact end we should all desire, aka: 1 less person walking in an area that they will use against the public to restrict access. The entire CCWS points to the data from these trail heads as a primary justification for restriction. Why CY 2015 was even included in data is pure stupidity considering it didn't snow that year..

I have repeatedly seen that data referenced as metric upon which to justify restrictions, and never to expand options, create a new trail, put more patrols in, or otherwise better accommodate the recreation.
Feel Free to Feel Free
Top

I am told at the west side RAC meeting yesterday the FS has entirely scrapped the additional fee plan:


FS announced that the fee proposal has now been completely pulled off the table and may or may not be revisited in the future. If and when it is ever revived they will be starting from scratch with proposal and notice and comment and hearings etc.

The FS spent months and months planning to implement this plan, planning to restrict and get revenues to support the new policy. And now they're left with new restrictions on access, the same level of resources to enforce (which was apparently none since they never referenced enforcement action in any of their primary/secondary/tertiary demand responses in the EA and they never addressed this in public comment) that they had before all this, but now with additional rules too, to the benefit of a private contractor, and considerably resource usage through this entire fee proposal that they're now scrapping. Including multiple public meetings, developing the proposal, processing comments, etc. Great use of public resources. definitely showed the public!

that's something you can

I suggested burn as it is an easy disposal method and the paper is fine firestarter. you could frame it for yourself Adam if you prefer.
Feel Free to Feel Free
Top
Post Reply
128 posts