Use this forum to post links to news stories from other websites - ones that other hikers might find interesting. This is not intended for original material or anecdotal information. You can reply to any news stories posted, but do not start a new thread without a link to a specific news story.
Post Reply
391 posts

The Oregonian had some more photos of the burn yesterday. I believe this is showing the talus field east of the Yeon TH that leads up to the Wauneka Gap. 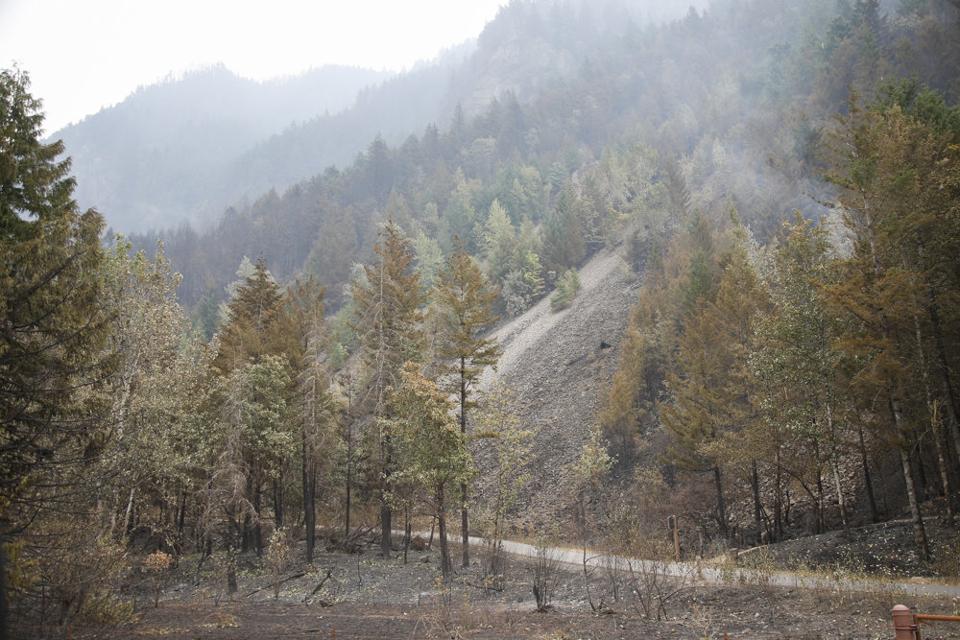 That's a decent batch of photos, Bosterson. I feel a little better now.

The last few days all I've seen is those perimeter maps and infared photos and, what with that and personally witnessing the fire go across Yeon Mt. on Monday night, I was afraid that the whole area would be razed. But -and I'm still only slightly more informed than I was- it seems that there were areas of tree-topping conflagrations, but there were more places where it just crept along the ground.

Which is still its own type of mayhem, of course. Here's a shot of the eastbound lanes of I-84 at the tunnel before Eagle Creek. Some of you have pointed out that the ground will be destabilized and yeah, looking at this, I can see how that slope could turn into mush.

In the places where the fire stayed below the treetops, the forest will be better off in the future; this is true of any wildfire in these parts, where fire was suppressed for too long. But meanwhile, yeah, there might be major erosion issues that make things rather inconvenient for us humans.
http://adamschneider.net/photos/
http://www.gpsvisualizer.com/
Top

What we really need is a change in the weather pattern. Hopefully that will come in a week or so. September is usually one of the nicer months around here but I wouldn't mind seeing a bunch of days of steady rain.

bushwhacker wrote:What we really need is a change in the weather pattern. Hopefully that will come in a week or so. September is usually one of the nicer months around here but I wouldn't mind seeing a bunch of days of steady rain.
6_to_10_Day_Outlook_-_2017-09-09_17.52.12.jpg

As long as that RRR is parked off our coast, Oregon will continue to get the weather that normally occurs 500 miles south. It reroutes the jet stream and our moisture ends up much farther east.
Top

Thank goodness for the google

Yeah, it seems like that's happening a lot the last few years

Maybe this is what global warming means for us????
Top

Rather B Hiking wrote: Anyone who was visiting Tunnel Falls, or doing any kind of loop involving Eagle Creek, on September 2, was doing so illegally. Due to the Indian Creek fire, which had been burning since someone ignited it with fireworks on July 4, Eagle Creek was closed from High Bridge to Wahtum Lake, along with connecting trails Eagle Benson, Indian Springs, Eagle Tanner, Tanner Butte, etc. Several reports from those who were trapped above Punch Bowl have referenced a gate at High Bridge, making it unlikely that anyone would enter the closure area accidentally. Coming from the other direction, information about the closure was posted all over the Gorge.

Technically probably not illegal since the group of 150 was following official (presumably) advice written on a note dropped from a helicopter to assist in evacuation away from the fire downcreek towards the trailhead. Further, they were told the gate would be opened for them by a ranger, but they broke it open while waiting for the ranger to arrive. Probably not a bad idea, given the approaching fire and increasing darkness.
Top

A coworker is 30 miles from the Irma "track".
She's wondering if she will have home two days from now.
Sorry that all of you will miss those Gorge views.
Top

Markh752 wrote:A coworker is 30 miles from the Irma "track".
She's wondering if she will have home two days from now.
Sorry that all of you will miss those Gorge views.

I think we all realize that many far worse things are happening in the world but it does make sense that discussion on this form would focus on local events that impact the hiking community.

That said, I do very much hope your co-worker is out of harm's way and doesn't lose their home.

(I edited this to read less mean. Sorry about that...).
Top

I'm pretty sure you're allowed to feel sad about more than one thing at once. Loss is not a competitive sport.
Top
Post Reply
391 posts