In 2008, and again in 2009, Pablo posted descriptions and maps of his explorations of a route along Lindsay Ridge. Prior to that, Don and others had posted descriptions and maps of the old trails, routes, and roads in Lindsay Creek State Park and the Old Wagon Road Historical Area. Looking at all this, I sensed that a loop could be made by ascending Mt. Defiance via Starvation Ridge, crossing over to North Lake, descending Lindsay Ridge, and then (somehow) returning to the Starvation Creek TH. Exploring this possibility was how I spent my Sunday. Bluebird days seem to be happening on their own more frequently and Sunday was no exception as I headed up the Starvation Ridge (414) trail. 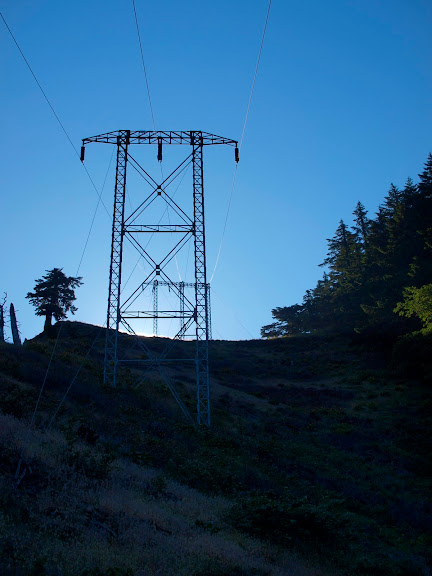 One thing I like about this trail is that it has periodic views to relieve the trudging through trees effect. Dog Mtn was all green (and its parking lot almost full), while St. Helens was still mostly white. 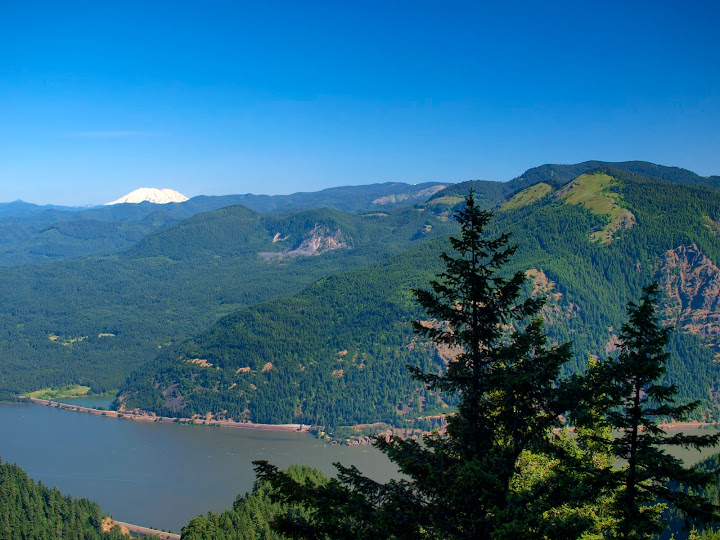 Adams came into view at around the 3000’ level 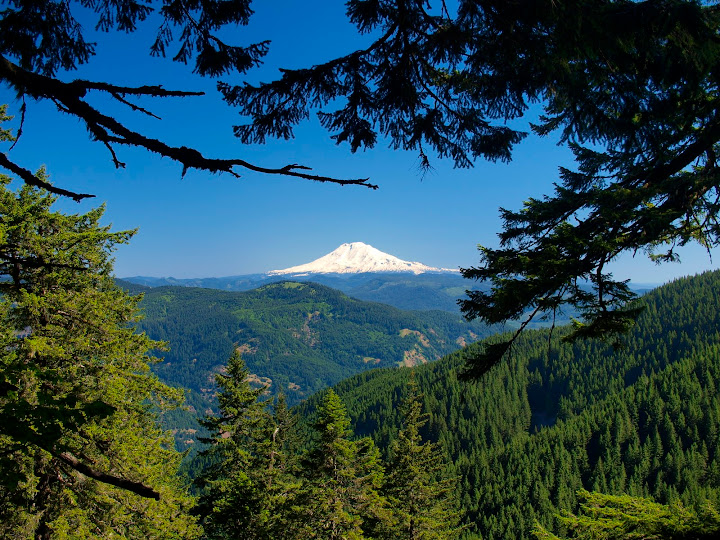 and soon I was passing a snow-free Warren Lake. 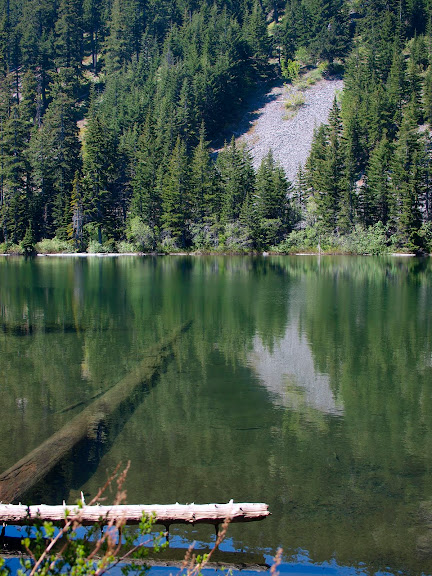 There were minor patches of snow from the 417/413 trail junction at about 4400’ to the top of Defiance and a larger patch on the 413 W of the summit but that was the only snow I saw all day - things are melting out fast. After a quick snack, I descended SW on the 413 toward North Lake, catching a view of Hood, 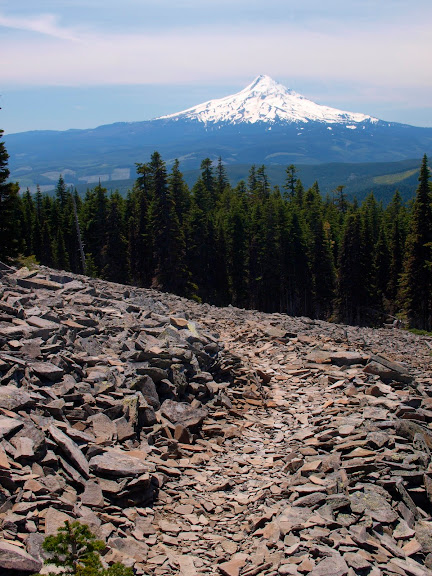 and a late blooming Trillium along the way. 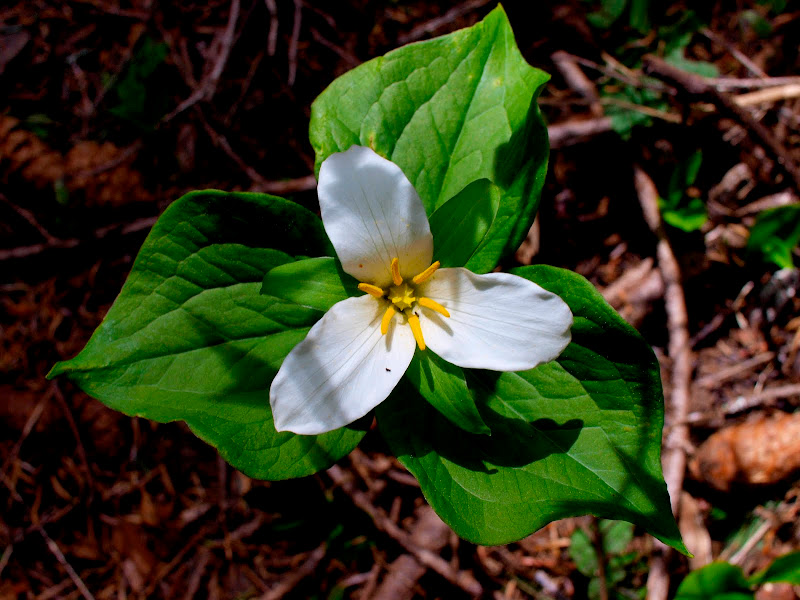 At the 413/411 trail junction, I took the 411 past North Lake and on to Green Point saddle. Barely a week ago, I had found the 411 about half-covered with snow and hard to follow in spots. Now all the snow was gone and, while the trail was still scruffy, it was easy to see and follow. From Green Point saddle, I went NE directly along the crest of Lindsay Ridge, then stayed right as the ridge dropped. I had imagined a bushwhack but the forest floor was mostly open for the majority of the descent (more undergrowth showed up near the bottom but even that wasn’t much of a problem). 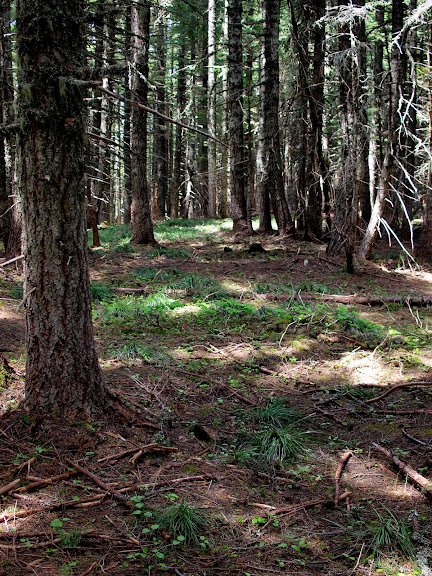 I mostly stayed right on the ridge but there was one steep section where some game trails came in handy. But there were no serious outcroppings blocking the way and nothing extremely steep - the W ridge of Elk is far steeper. 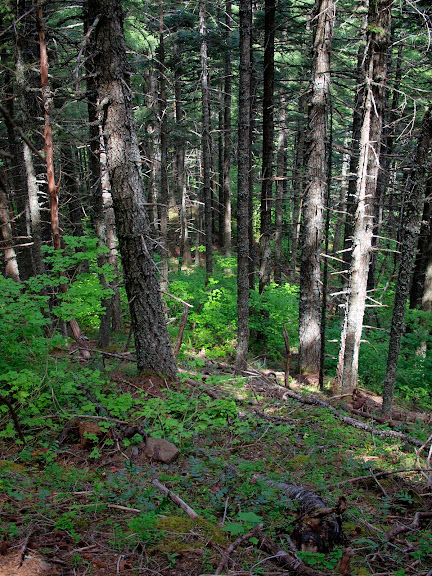 This arts and crafts project with a large log was on the ridge a good ¾ mi from the bottom. 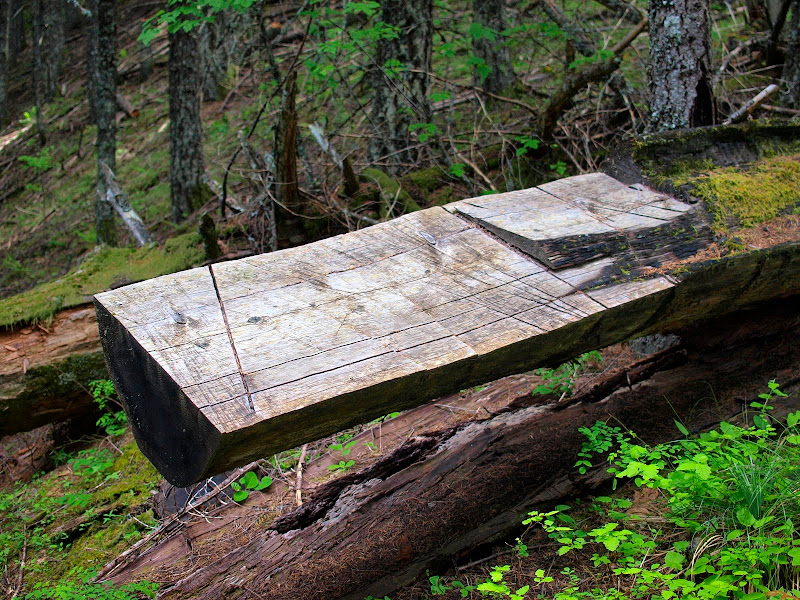 There was also this odd rock formation, 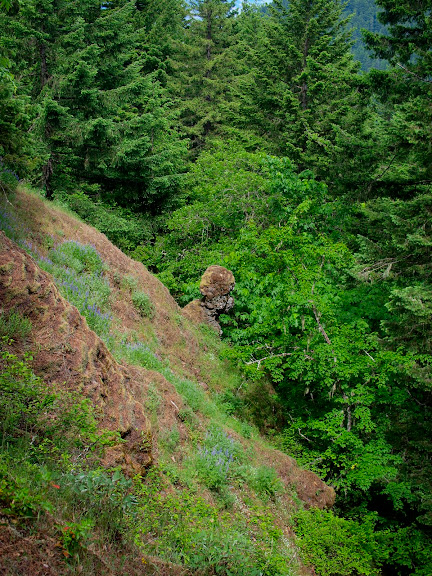 which close-up looked something like a large poodle (or a character from Planet of the Apes). 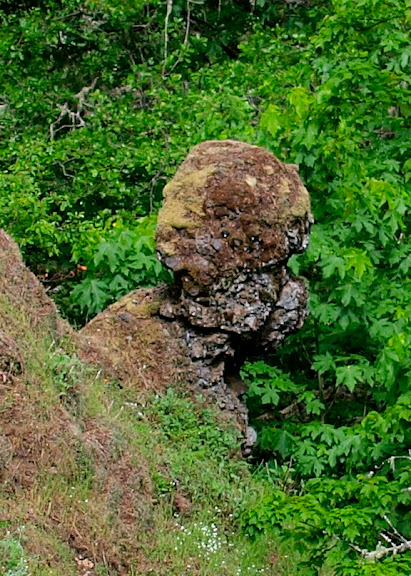 Don’s map shows an old road snaking up the lower part of the ridge but I ran across several other “roads” or dozer cuts higher up then that. I was thinking about trying to find and follow the lower road but eventually opted for a speedier descent directly down the ridge to the power line service road. At this point, continuing E to connect with the Defiance (413) trail was blocked by Lindsay Creek Falls, which, although charming, were not something I was keen to try crossing. 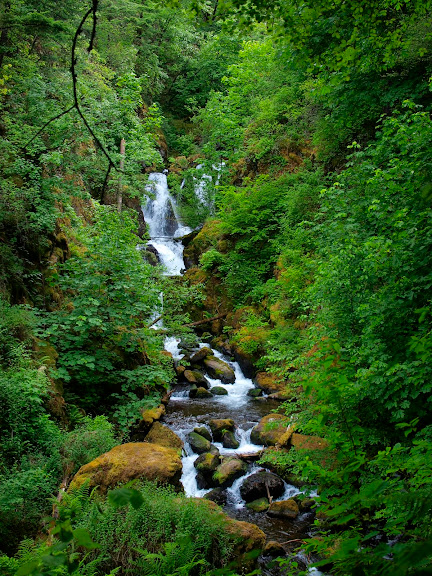 So I descended to I-84 and crossed the creek on a freeway culvert. I had every intention of following the freeway to MP 53.7, then re-entering the woods to find the log stairs that would take me back up to the 413. But, sadly, my resolve failed, as hiking back uphill at this point seemed so much less inviting than just hiking along the freeway directly to the TH, my car, and refreshments at home. Quite an adventure (14.8 mi, 5400’ gain) and certainly something different than my usual Defiance loop. Pablo is to be seriously commended for finding (re-discovering) this route and for route-finding his way up it! 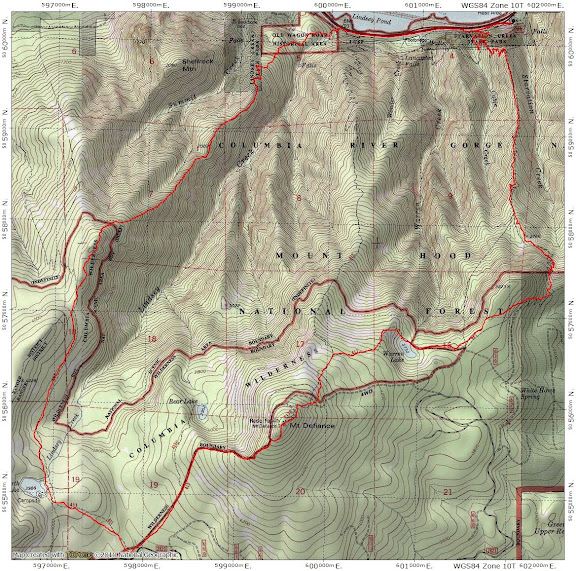 Very nice report, great pictures, and I'm going to have to do the route you took - it pretty much has everything, big views, lakes, some off-trail navigating. One way to find the stair step log is to follow the powerline right of way going east from Lindsey Creek, you'll run into it eventually.

Good stuff, next door to Lindsey Ridge you'd like Shellrock Mtn and the ridge going south from the top - it is a little brushy in spots but the rewards are many. I've done it going east from Wyeth on the powerline access road to get on the the chutes-and-ladders powerline access trail across the north face of Shellrock to meet up with the trail to the top of Shellrock Mtn. From there, up and over Shellrock to the ridge going south (thx to mandrake for the beta).

pablo wrote:Very nice report, great pictures, and I'm going to have to do the route you took - it pretty much has everything, big views, lakes, some off-trail navigating. One way to find the stair step log is to follow the powerline right of way going east from Lindsey Creek, you'll run into it eventually.

Good stuff, next door to Lindsey Ridge you'd like Shellrock Mtn and the ridge going south from the top - it is a little brushy in spots but the rewards are many.

Thanks. I kept thinking that if I wasn't careful to bear right after leaving Green Point saddle, I'd end up on the ridge down to Shellrock. Didn't, but glad to hear it's passable.
Top

(Nice report! I get tired just reading it.)
Rambling on at Allison Outside
Top

I think it is a Petrified Sasquatch!
Shoe Shine Boy Has Left The Building!
Top

Looks like Dr. Zira from the original Planet of the Apes. Nice find and excellent report - that's some serious distance in that terrain. Nice photos, too.

Looks like a great loop! I will put it on my ever growing list of hikes to do!
Some people are really fit at eighty; thankfully I still have many years to get into shape…
Top

Hiked on 7/3/2011 in perfect hiking weather. DON’T UNDERESTIMATE THIS HIKE. Guidebook descriptions of trail as "insanely steep" and "relentless" are not hype and may be understatements. It will be a challenge for all but conditioned athlete or young mountain goats. We went uphill on Starvation Ridge trail, down Mt Defiance trial as recommended so our decent would be less steep. Trail is a steep, nearly constant uphill which of course means you have to get down. At the summit ignore the jumble of communications towers, forget the road. Still, the views (in good weather) are spectacular and well earned. Save your knees for the endless series of steep switchbacks in the last 1/4 of downhill. A parking lot never looked better.
Top

Yep, that's me. Not all the ribbons - just the ones that were clearly decrepit or seemed out of place.
Top
Post Reply
12 posts