Upper Bridal Veil Falls seems to be getting more popular every month, so I headed out to see if I could find it for myself. I'd read that it was a serious undertaking.. all the better in my book. Bryan Swan's directions to the pull off were spot on. I parked near the bench in the hill on Palmer Mill rd, and took off. To my surprise tho, in 3-5 minutes I could see the falls. They're practically right off the road, but about 400 ft in elevation straight down to the base. I could see how getting to the base would take a bit of effort, but for any seasoned scrambler it would be cake compared to alot of other off trail falls. Seeing how easy it was, I settled for an un-level viewpoint shot up on the hill, I'll come back when theres more leaves and less flow.

Forgot my camera was set to 'vivid', so excuse the mass saturation in these photos

With the extra time, I did a quick scamper down to the bridge at Latourell to get my fill of falling water

Brian, that is where the slope seems to take you -- that's exactly the spot we first popped out at when I went down there with Greg Lief a few years ago. The descent point is significantly downstream from there, maybe 100 yards, so we ended up heading up a bit, before descending a steep slope of sword ferns and conifers. It's short and steep, and has loose cobbles under a thin layer of duff/ferns, so going back up is the slow part. You can sort of fall down... you know how that goes...

Zach posted some excellent photos of the canyon section between the upper falls and the middle falls -- neat area, with a couple of small drops. I believe he used ropes at some point, but not sure.

Thanks for the report!

Thanks Tom. I read over all of Zach's stories before I went, along with checkin out all the photos on flickr of it. After I took that quick picture I went downstream and scouted a way down in the woods. There's an 18" log laying vertical on the hill that'll make a nice hand rail so to speak, plus I bushwhack up-hill in crampons.

I'll definitely be back for more, but Copper Creek falls is beckoning

Brian, If you happen to find an orange trekking pole when you return, please let me know.

It was stolen(by the bushes) from my pack while climbing back up from the falls in October.

I also packed out quite a bit of broken glass, and this:

Sounds good CFM. I'll be on the lookout. That aftershave though.... Not exactly something I'd expect to find off trail
Clackamas River Waterfall Project - 95 Documented, 18 to go.
Top

Glad you got in there! Upper Bridal Veil is a very interesting falls. Recently I discovered an old photo of it when the flume was there in the 1800's. Believe it or not, it came directly down the cliff only a dozen feet or so to the right of the falls (west). It was quite a contraption at that spot - like a giant conveyor belt.

I've rappelled directly down where it was on a couple occasions, and didn't see any remnants. While there are some more modern pieces of garbage, such as tires, in the pool below, nothing from that era remains. (Though I'm sure if you dug far enough you'd find old nails, etc...)

That's very encouraging to me. Given the growth rate of foliage in the Gorge, rehabilitating previously "developed" sites is relatively easy. Wooden structures break down quickly. Tom, in fact, has developed a very good plan to rehab Bridal Veil, and create a trail to see the falls upstream of the historic highway. It's an idea I'm thrilled by. I can't think of a better "example" stream in the Gorge to do so. It has received perhaps the heaviest usage of any stream its size here (in the past two centuries). Cleaning it up and restoring it to near pristine condition would not only demonstrate what's possible, it could provide inspiration for future efforts.

Here's that old photo - Its in an old booklet I found at an antique store, its called Columbia River Gorge: Discovering Old Oregon Series: Volume 1., printed by Frank Amato Publications - though I think the pic is from the Oregon Historical Society files.

Its in an old booklet I found at an antique store, its called Columbia River Gorge: Discovering Old Oregon Series: Volume 1., printed by Frank Amato

Thanks for the tip on this booklet Zach, if it's this one there are quite a few available through Amazon sellers if anyone is interested. 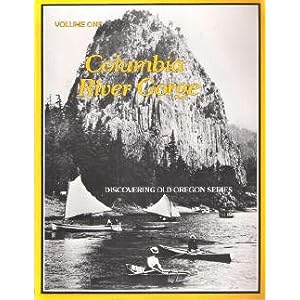