by pyles_94
this is really late, but a week ago i went to the gorge for some minor bushwhacks. i chose to do gorton creek falls and the upper upper falls on mccord creek.... both pretty easy.

so i found the trailhead at wyeth and started out on the trail 100 feet before it came to a messy junction. a huge log lies across the trail going up the creek and another trail branches off to the right and left.... i continued on the trail on the left side of the creek about half mile to what has been un-officially named emerald falls.

and from the splash pool:

now the "bushwhack" began... its more like a short scramble...

i followed a faint path up the left side of the creek about a hundred yards to the magnificent 100 foot plus waterfall. here it is:

i shot a random video too:
http://www.youtube.com/watch?v=pj2q-Xnr0SA

the creek below it, including emerald falls is really beautiful. it may be even more photogenic than gorton creek falls...

okay, moving on, i went to the John B Yeon trailhead and hiked up to the cliffs above elowah falls:

then stopped by the upper mccord then continued on to the creek above. i waded across the creek then walked in/by the creek up a few beautiful slides to the "upper upper falls". it is soo beautiful. i think its my new favorite area in the gorge, and i also think it was one of the most beautiful areas on earth. i just fell in love with the falls. i am aware of the faint trail that leads on the right side of the creek, as i have travelled up here in the winter with more water. i wanted to take the scenic route this time. here are some photos: 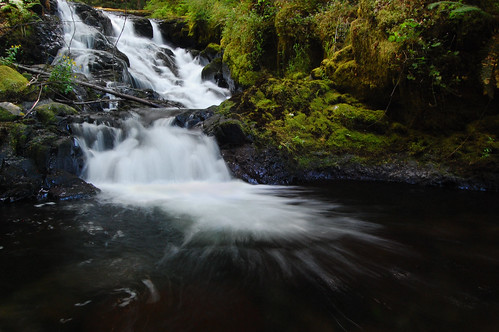 and a close up:

then i packed up and hiked on out of there! i came home very happy.....

by AlexanderSupertramp
Good stuff Jamey. You're photos are great!

by Splintercat
Nice work, Jamey - I like the profile view of Gorton Creek Falls, and also the mini-pano of the Gorge from above Elowah!

by pyles_94
Thanks adam and tom!


i just got a polarizer a few days before this trip and i had already tested it out once... i was still super stoked to use it. you can especially tell the difference on the elowah canyon pano... i love the polarizer! it works great and definitely helps pictures turn out good.

It looks like you are putting that new polarizer to very good use. Your photos keep improving with every outing... well done!

by Splintercat
You know, Jamey - it's not PC with the hardcore camera Nazis, but I keep polarizers on all of my lenses in lieu of a skylight filter. Yes, there are two pieces of glass instead of one, and yes, it costs me an f-stop or two at the bottom end, but it's convenient, and I almost never shoot an image that doesn't benefit in some way from using it.

It's also the one thing I don't like about my point-and-shoot "belt" camera that I've been carrying this year, since it's a pain to mount filters on that thing. So instead, I underexpose in order to limit some of the glare.