This was my second look for the #511, the first look, documented in this trip report, was in the area of the confluence of the South Fork and the main stem Roaring River and I did not see evidence of the trail at that time. The goal of this attempt was the entire length. My expectations for finding trail were low as I had not seen anything on my previous visit. This thread from the Trail Advocates site did nothing to buoy my confidence that the trail still existed - http://www.trailadvocate.org/discuss/ms ... 06&m=5&d=6. In Donovan's response was mention of a book with a chapter describing the building of the 511 - "Tales of the Clackamas Country" by F. Alton Everest. As part of the research for this exploration I ordered the book from Amazon and yes, in 1933 Everest headed a work crew of 10 men that built the trail. The book is an interesting read for fans of the Clackamas. The story has more anecdotes about the people than the particulars of the trail but then with 10 men and a month, seemed like they might be able to put together a decent trail - unfortunately, other than being told to foreman the crew that built the trail there is no reason give for why the trail was built in the first place - perhaps, as Donovan Harding suggests in his post, it was to provide administrative access to the area.

The 511 appears on several Mount Hood National Forest maps, slowly fading away until its total disappearance in the 80's or 90s. Here's the history of the trail based on the maps I have:

From the 1938 map, a trail down from the end of Indian Ridge (from the Everest book above he was on the crew that built the road there) crosses the RR then goes up to Corral Springs (AKA Lookout Springs?). The South Fork trail had been completed by this time but not in time, I guess, to make it to the cartographer. Note that if the layout of the Corral Springs is correct, the current Corral Springs Trail is a relocation. 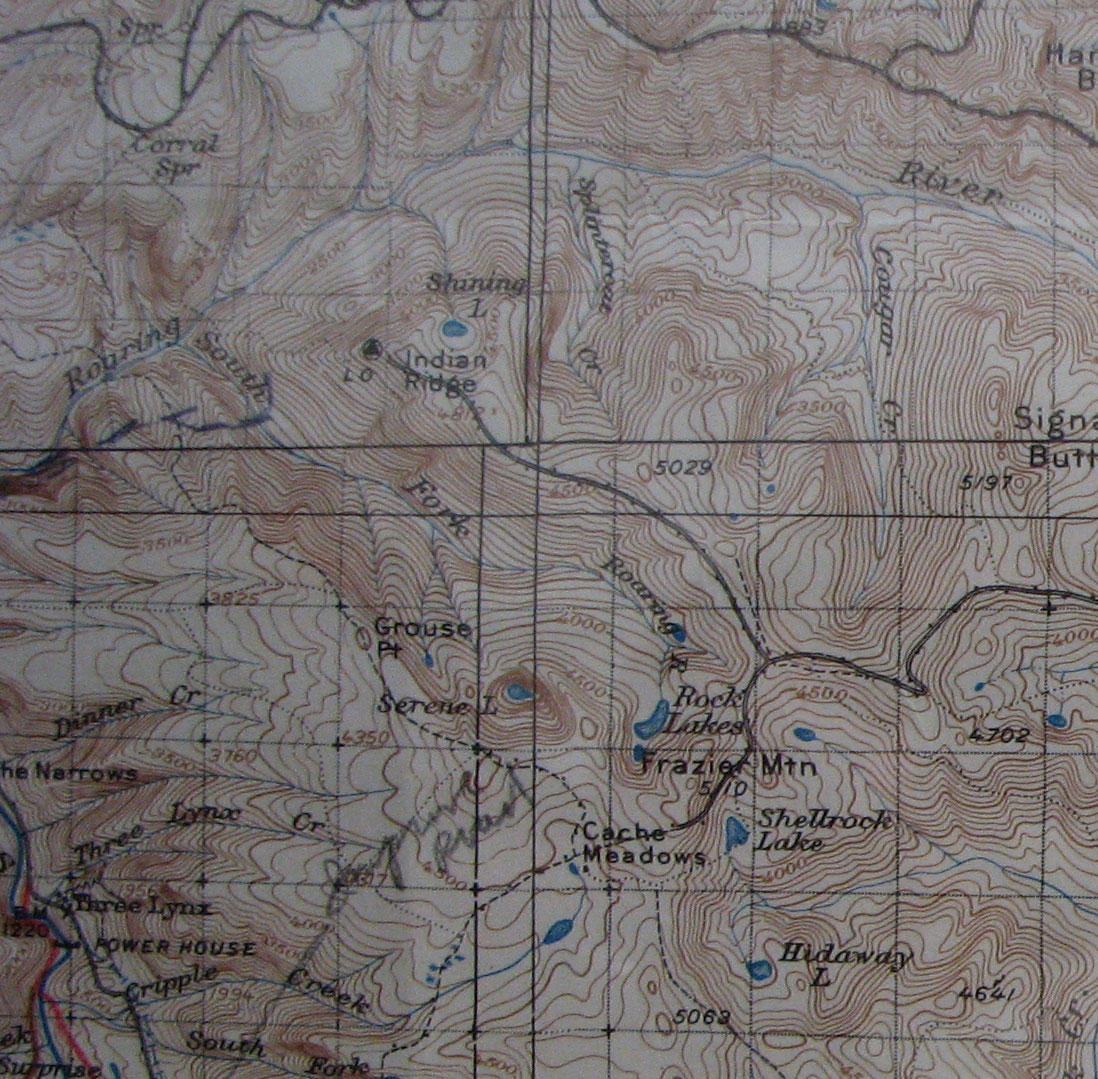 In the 1946 map, the trail is complete. As drawn, it passes west of Lower Rock Lakes and hugs the South Fork. Crude map making or the original route? 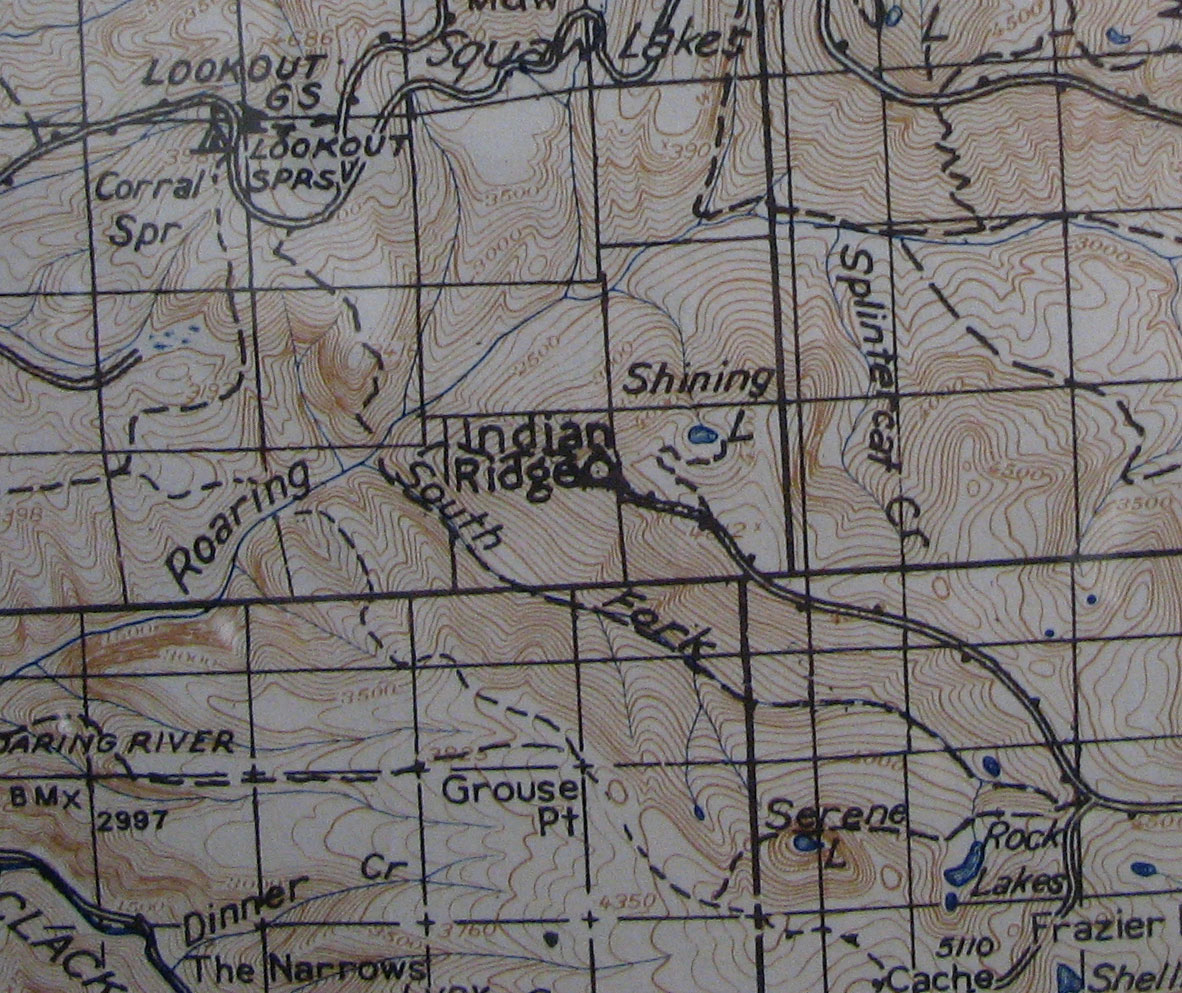 In the 1963 map, the trail passes to the east of Lower Rock Lake and connects to the Corral Springs Trail. 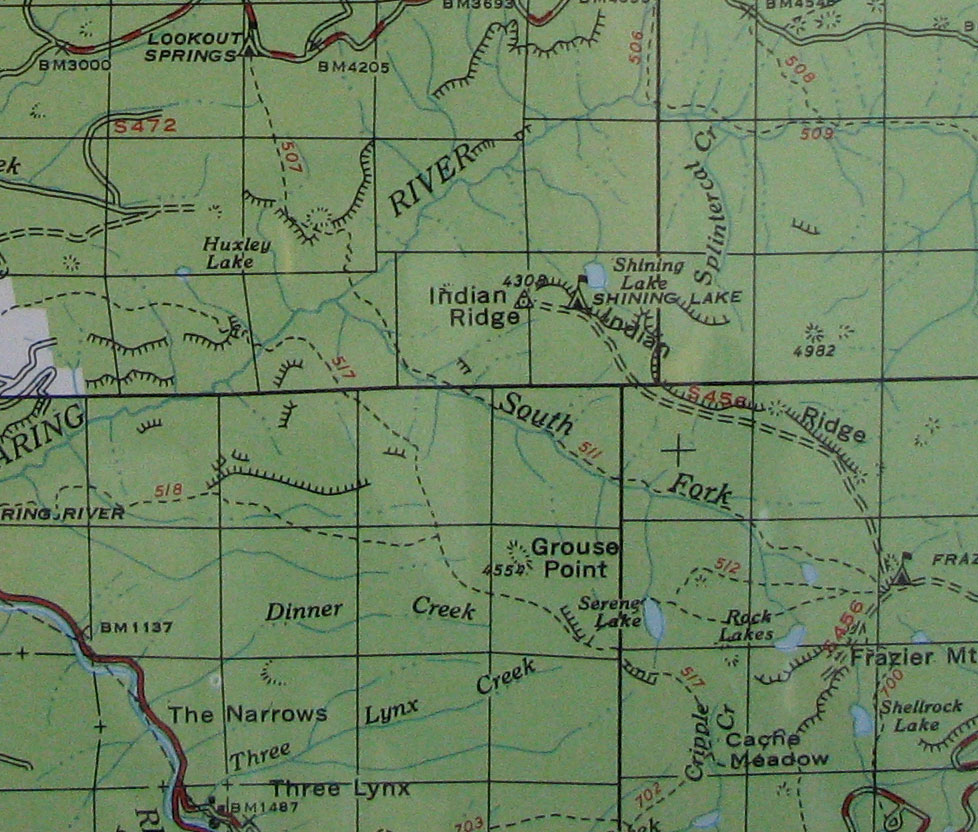 Between the 1963 and the 1966 map occurs what I call the 'Great Purge'. A very large reduction in the trail inventory but here the 511 is spared - did this mean the 511 was still in use? I found this encouraging. 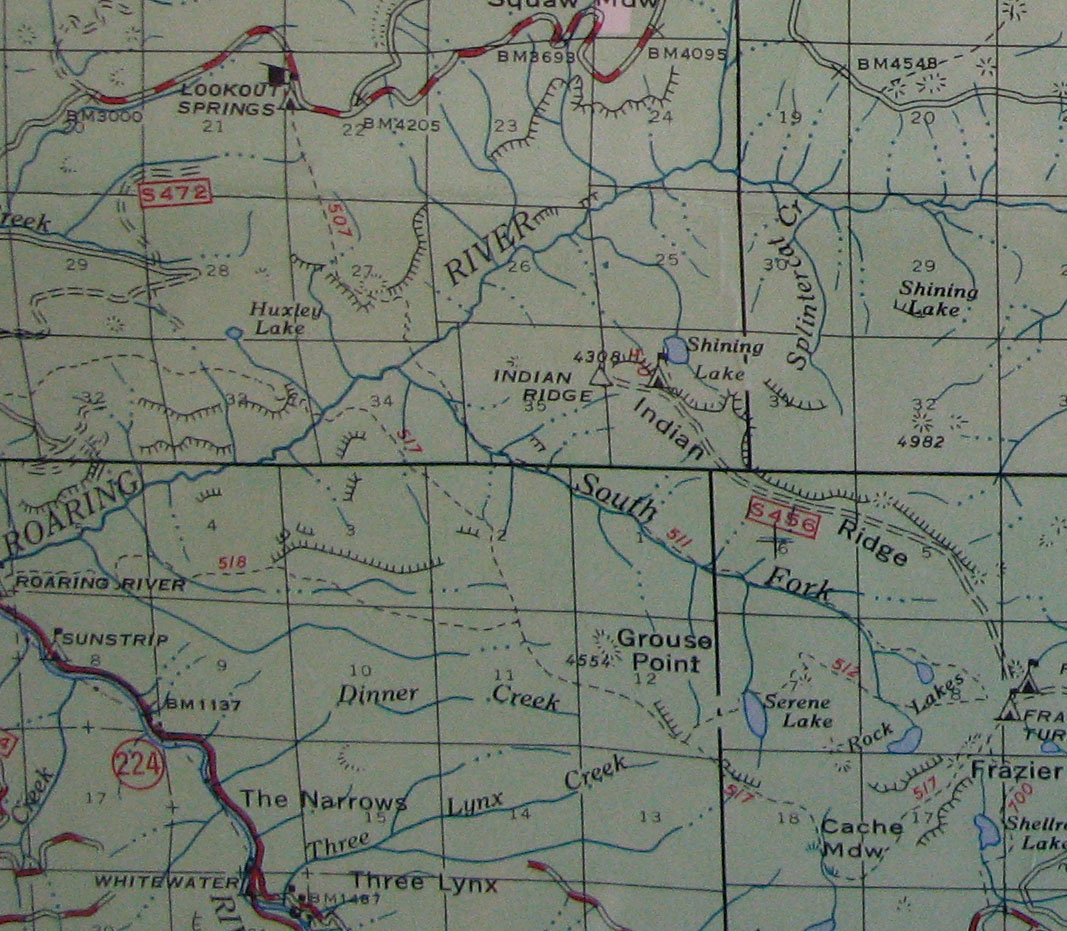 Here, in 1972, the trail only makes it to about where the canyon walls of the SF steepen. 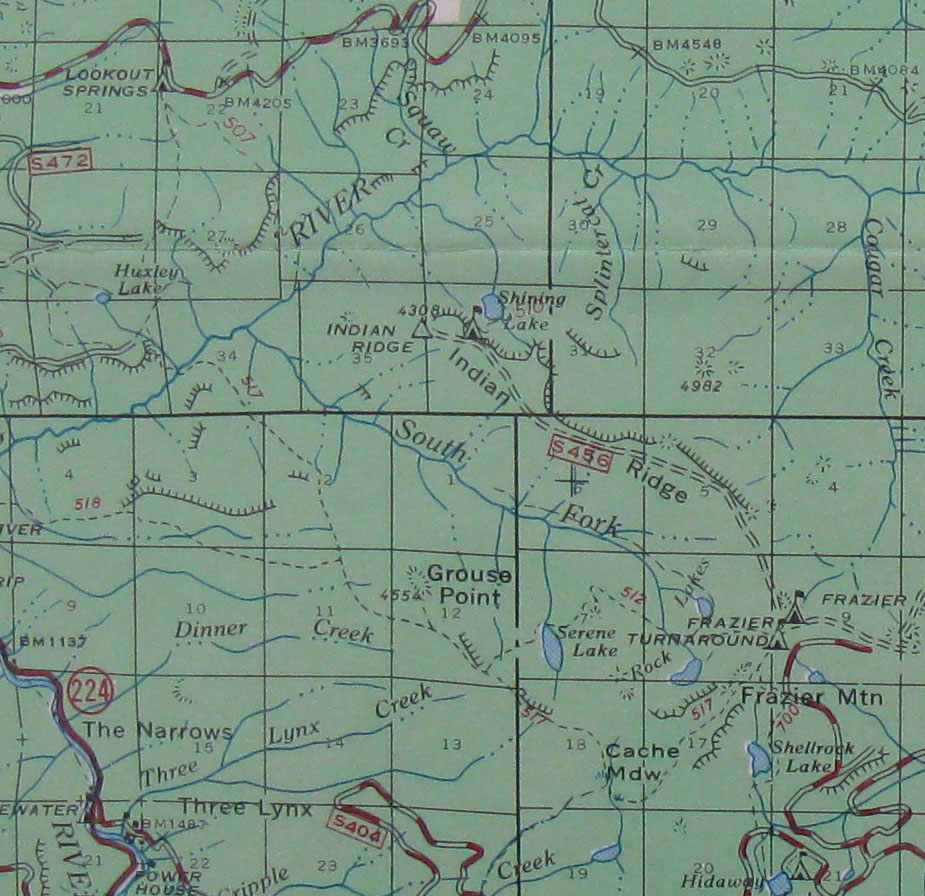 In 1979 the unmarked 511 is just an isolated piece of trail starting someplace and ending someplace connecting to nothing. 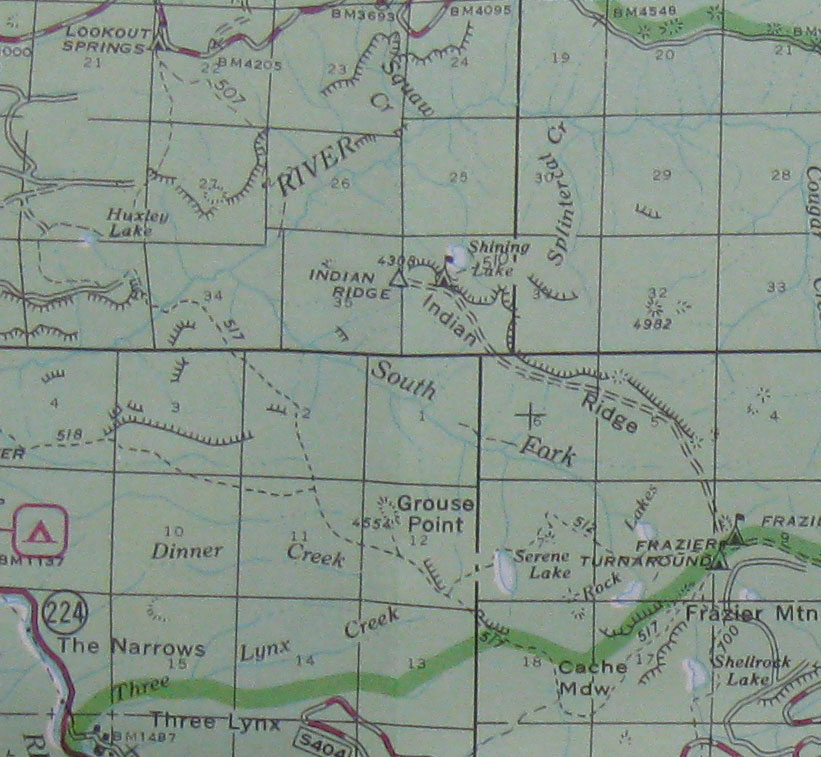 To avoid the unpleasantness known as the Frazier Mtn road I started this hike from the Shellrock Lake TH in the early morning sun and clear blue skies. This was likely a mistake as starting from this TH added about 3 miles to the total and I could have used the extra time by the end of the day.

Shellrock Lake pictures, very pretty, very still except for a couple of ducks making tiny ripples as they paddled their way around the lake. 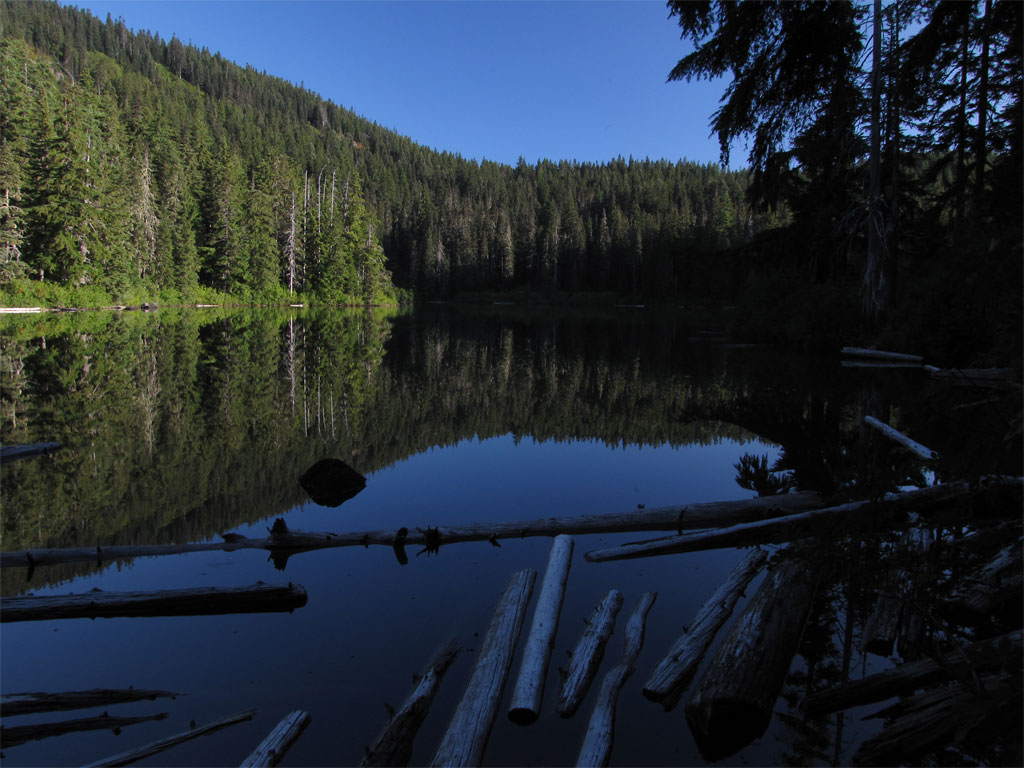 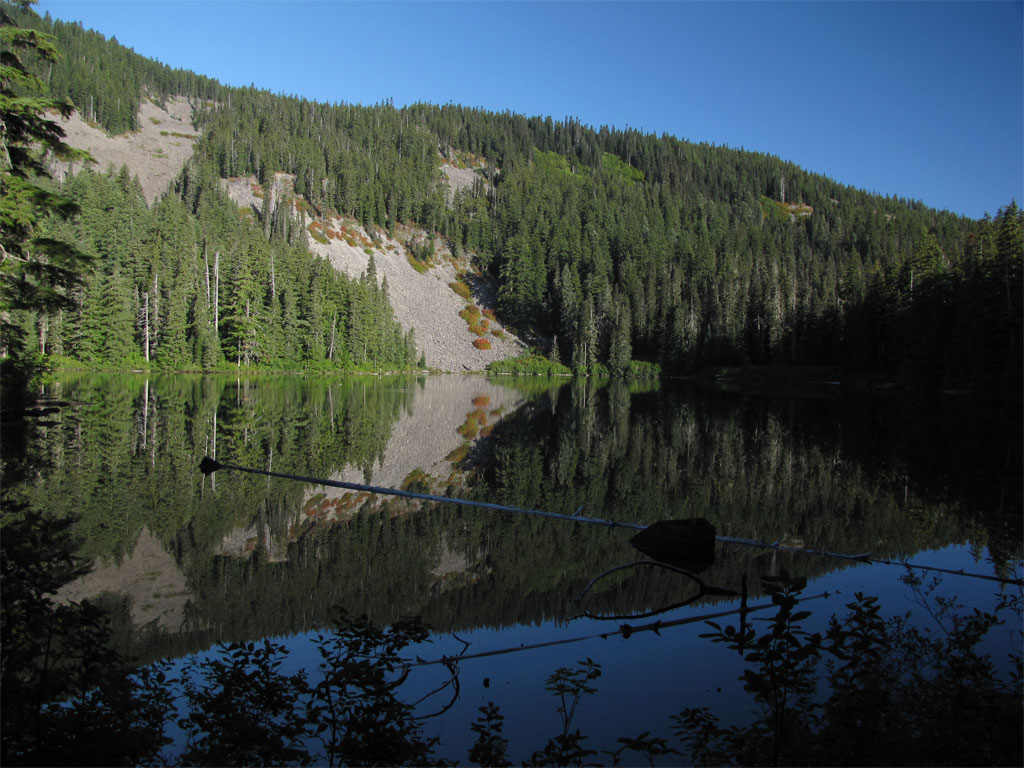 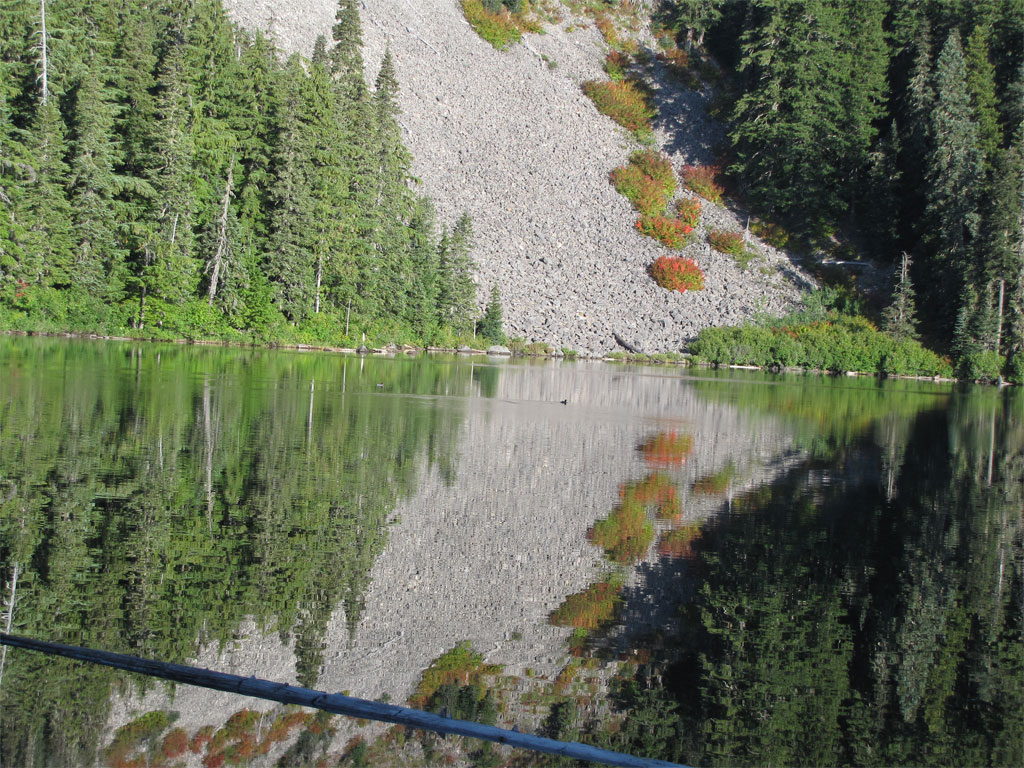 I made it to the Frazier Turnaround TH around 9:00AM and started the adventure. I did not bother with the Serene Lakes trail nor a shortcut on the trail segment to Lower Rock Lake I just followed the later MHNF maps and went down the gentle slope to the east of Rock Lakes. An easy bushwhack, level, huckleberries, few rhodies. It was just east of Lower Rock Lakes where I picked up blaze and a fairly clear trail. The 511 lives? I went along following blaze until the trail became so obvious I stopped looking and just went with the flow of the route.

Typical blaze on both sides of the tree abounded. The picture on the left shows the blaze corking over and in a few years will be gone. 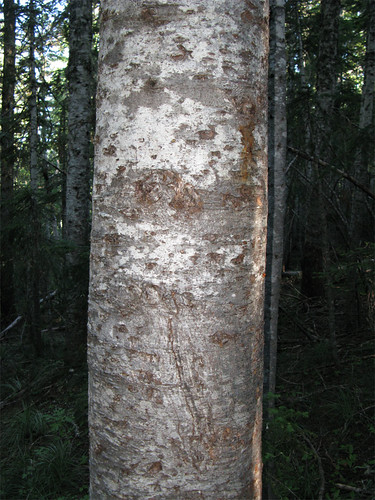 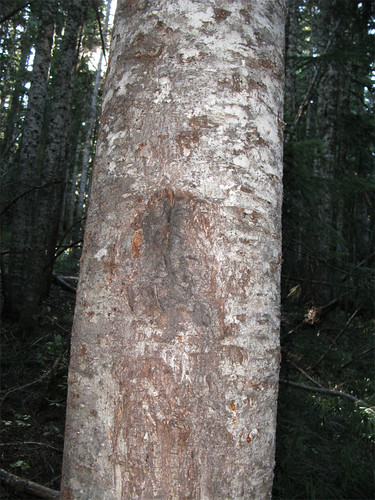 Here is a segment of trail, goes up the middle through the open corridor in the center of the photo. 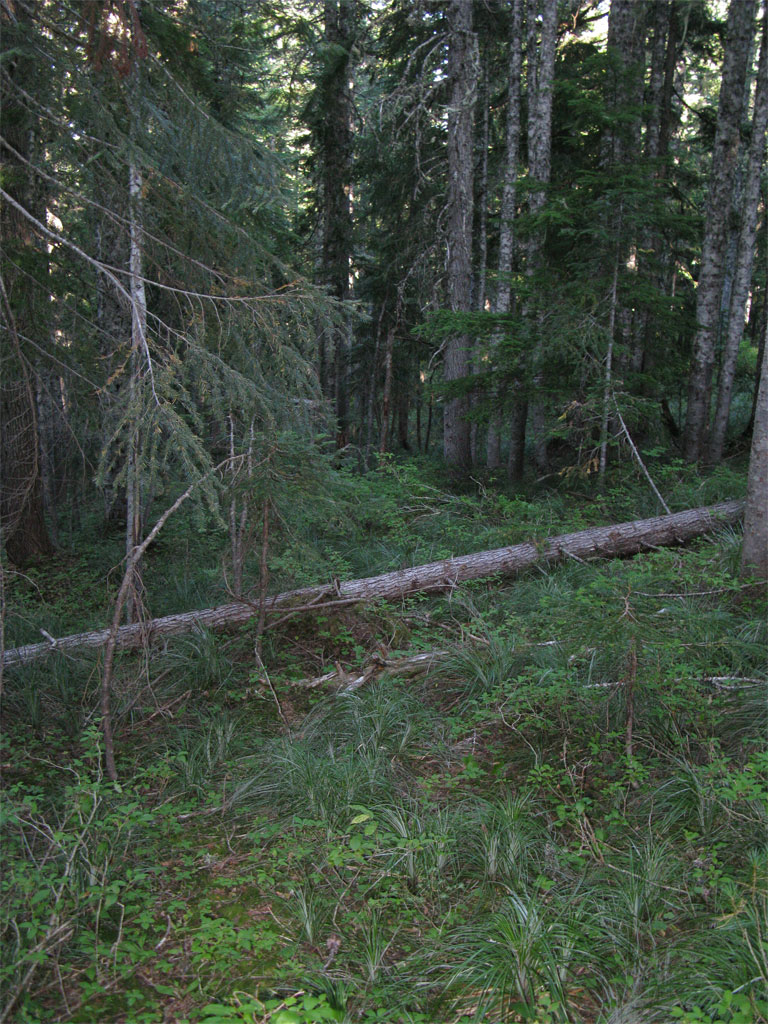 After a half mile or so, I lost the trail, never to be seen again for the remainder of my travel down the canyon.

I did run across patches and remnants of old growth trees. These would have be substantial trees in Alton Everest's day. 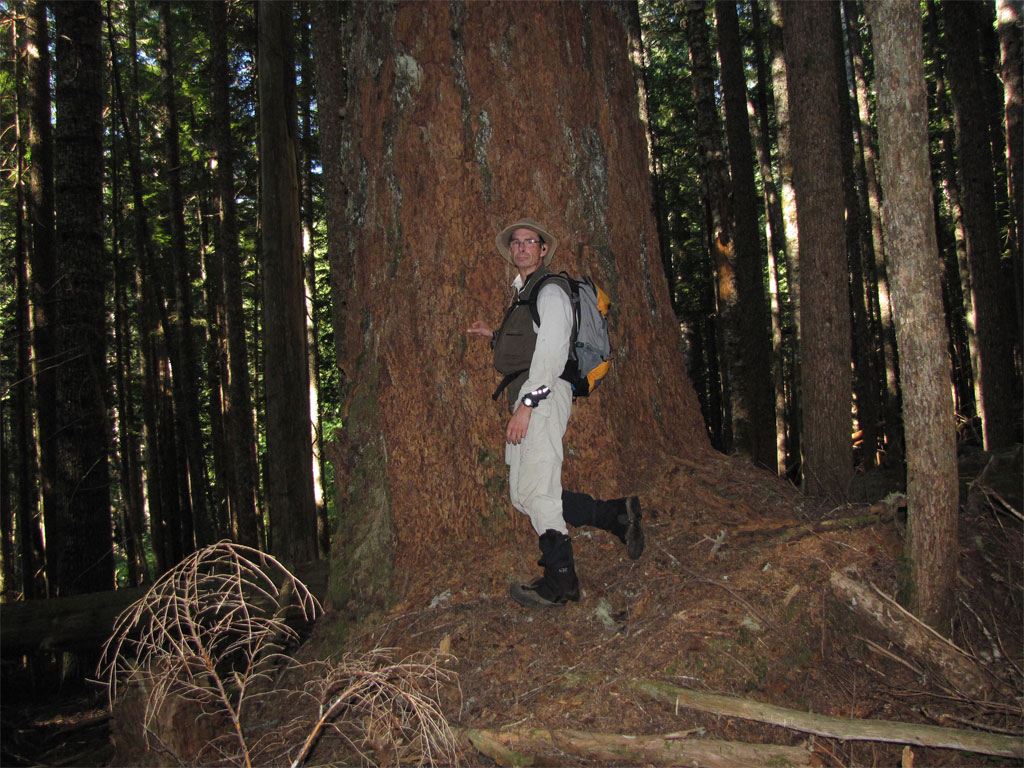 Once into the canyon the logic of the route was apparent, there is a sloping bench above the river that apart from a couple of choke points I was able to avoid much of the steepness of the slopes above and below me. Although I saw no blaze or trail, it surely ran close to the 511 route. I was cliffed out only a couple of times and they were easy to route around.

The following is pretty typical of the side hill bushwhack, lots of downed logs to step over, some quite large, salal, huckleberries, and vine maple (and here, the vine maple was more of an aid than an obstacle as vine maple makes the best leafy belay). No rhodies! I could count the rhodies I saw on the fingers of one hand. 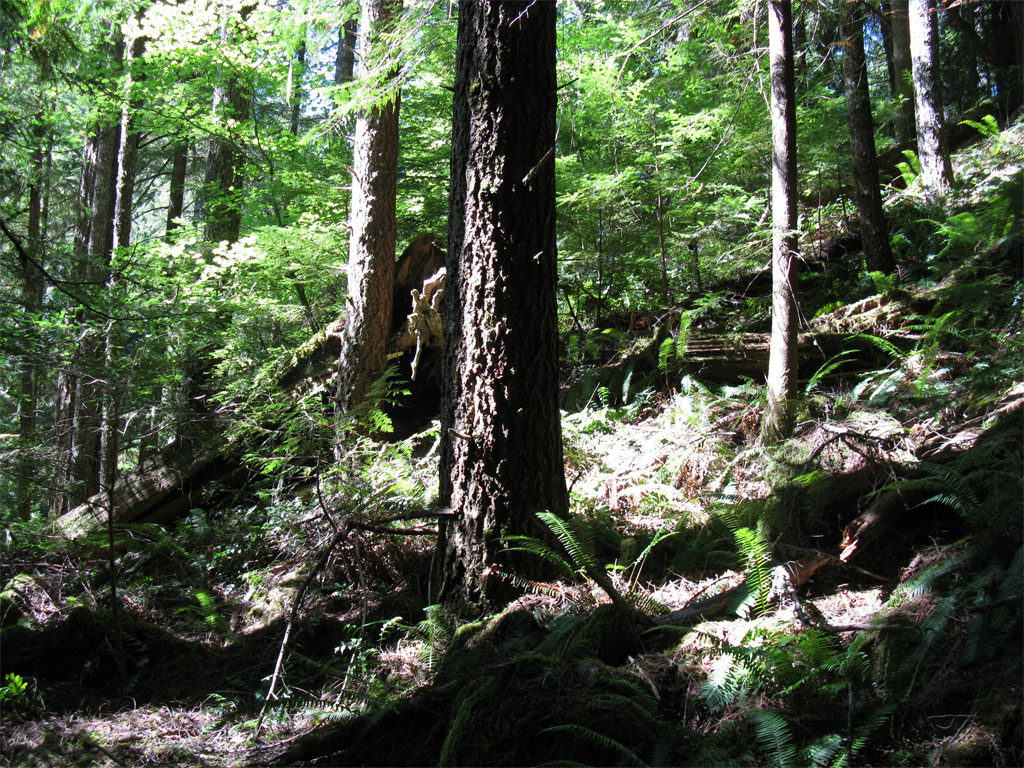 I'd hoped to find the waterfall that is supposed to be on the South Fork, but I did not see it, I was in sight of the river most of the time but it is likely I passed above it to avoid some steep cliffs. I did run into a nice sliding falls from an unmarked tributary. 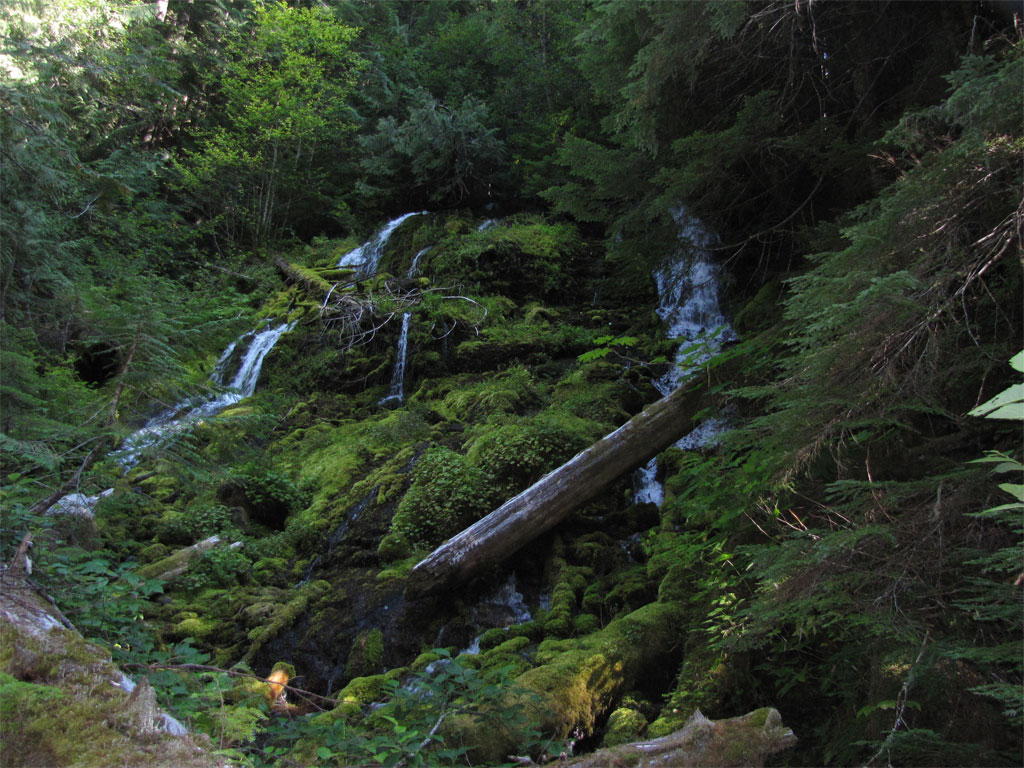 As I neared the confluence of the SFR and RR a rocky slope unsuitable for trees allowed me to get a look up the SF where I'd been and across the river to where I'd go to pick up the 517 Grouse Point Trail. 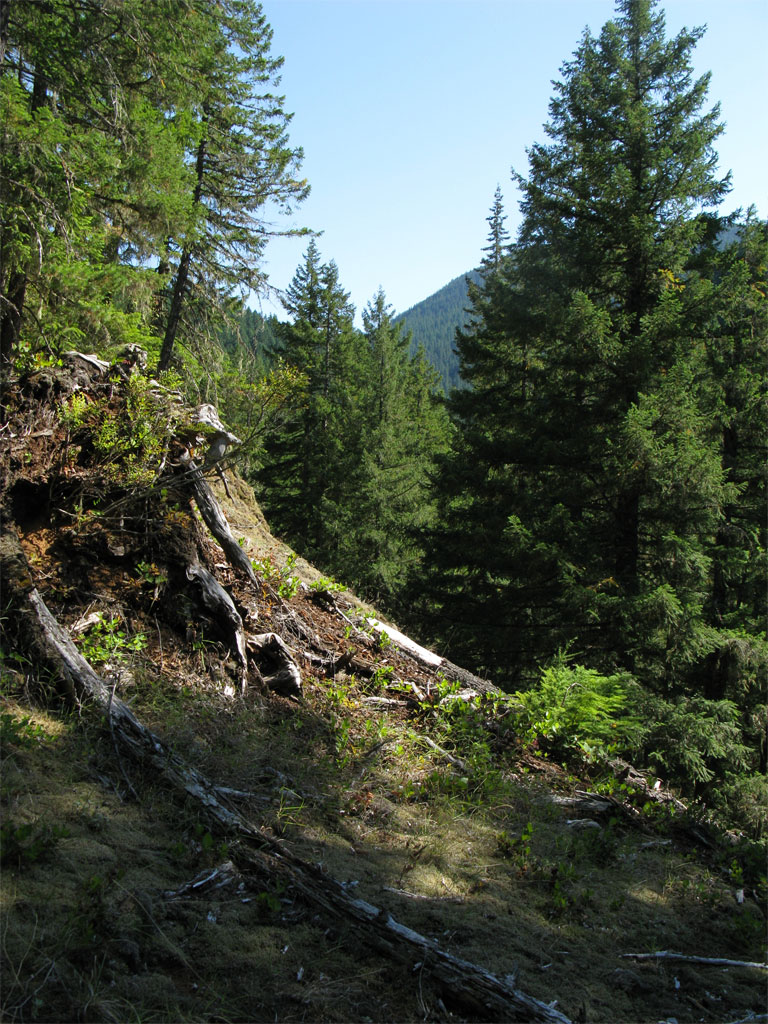 Looking down in the direction of the Roaring River, the near ridge left of center is my route to the 517 and home. 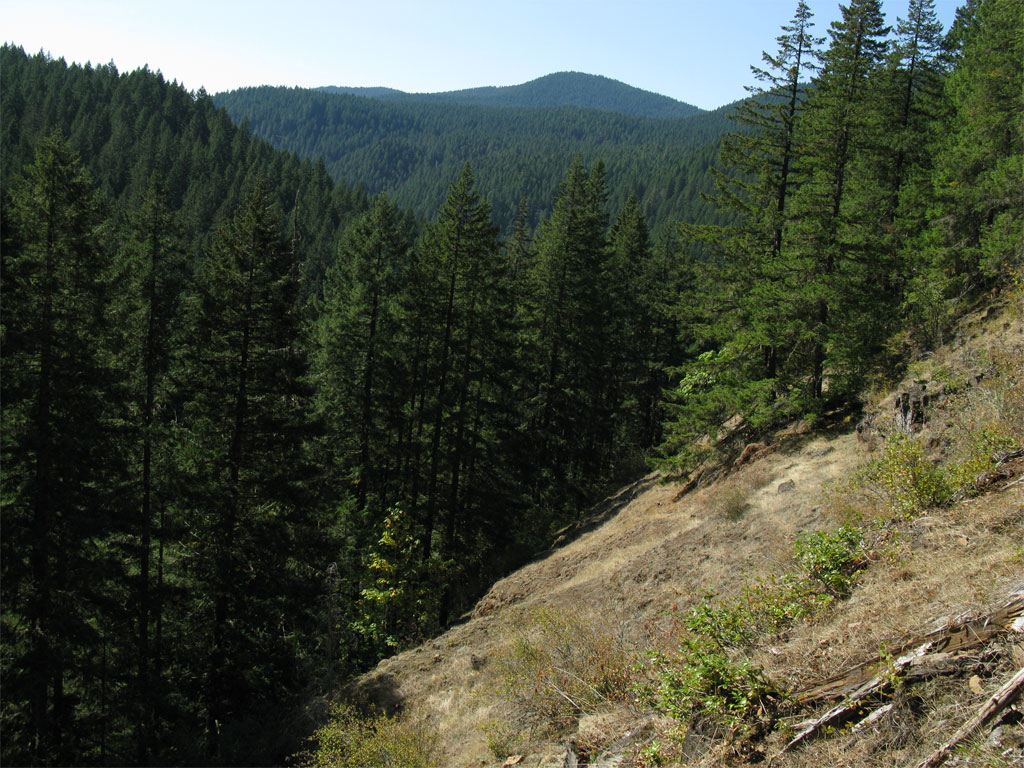 Around 3:30PM I crossed the South Fork at the same location the last time I was in this area, on a nice natural log bridge. There is enough water that crossing unaided without getting wet feet is not possible. 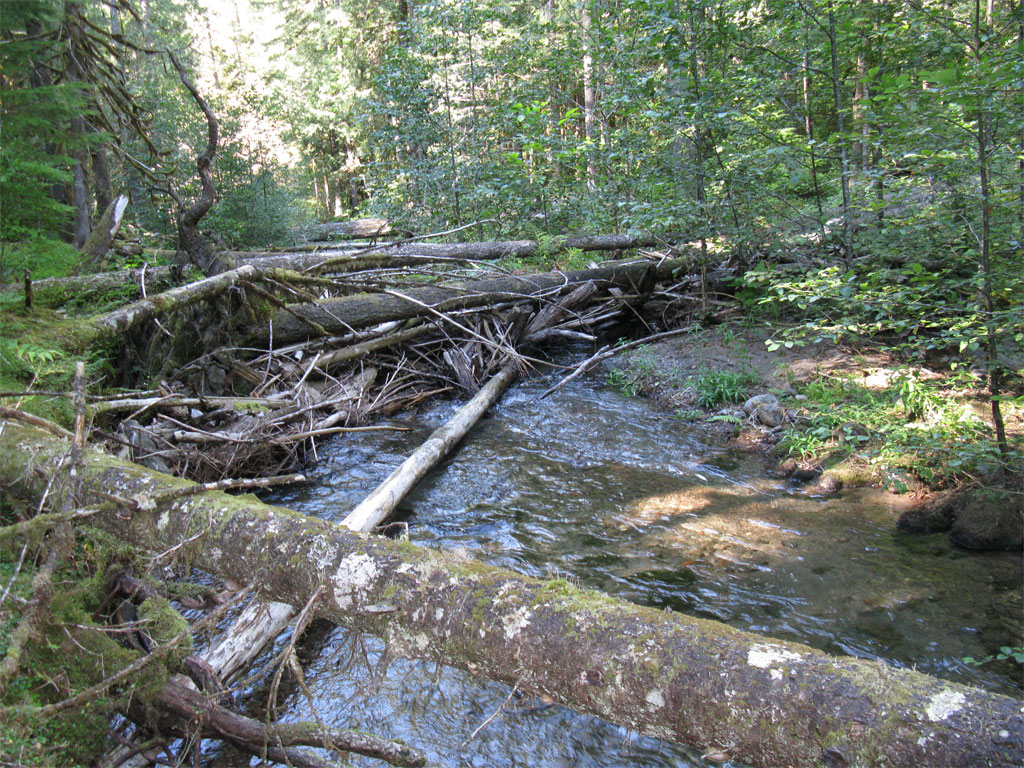 By 4:00PM I was out of the South Fork and up the hill to locate the 517. The 517 is blazed but faint and walking past it was a distinct possibility. Here's the look right at the spot I landed on the 517, apart from the blaze the trail looks like the forest floor in some places. 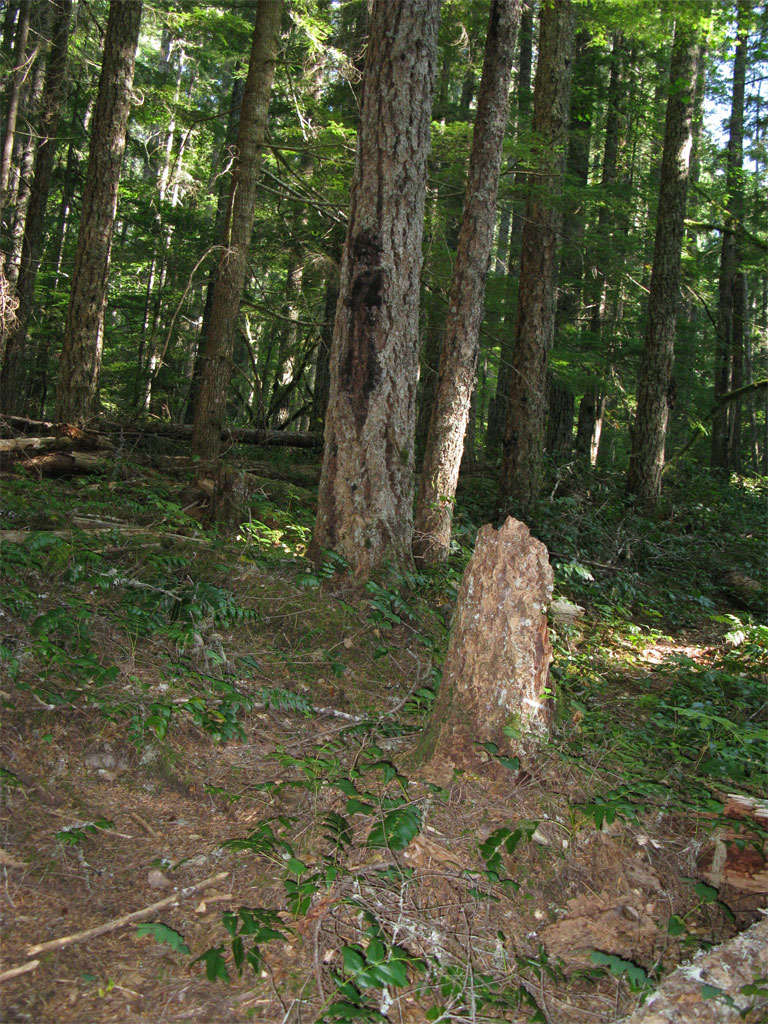 The hike out of canyon on the 517 was brutal, I thought I had enough water, 32 oz of sports drink and 16 oz of water plus lots of energy bars and whatnot. But the 517 is a 'no prisoners' route out of the canyon and continues to climb all the way to the point where it drops to Cache Meadow. I ran out of water and started feeling the effects of dehydration - just about what happened the last time I did this route (see the trip report mentioned at the start). Fortunately I ran into a couple of backpackers on their way to Serene Lake who generously gave me a few ounces of water which was enough to get me most of the way back. In retrospect, given my water situation, I should have take the Serene Lake route back to Frazier and the upper Shellrock Lake TH. I would have had plenty of water sources along the way. As it was I did a fruitless and exhausting trip down to Cache Meadow for water and once there declined even though I had filtration. Cache Meadow was pretty in twilight and I would have liked to have lingered but it was clear I'd finish this one under headlamp. 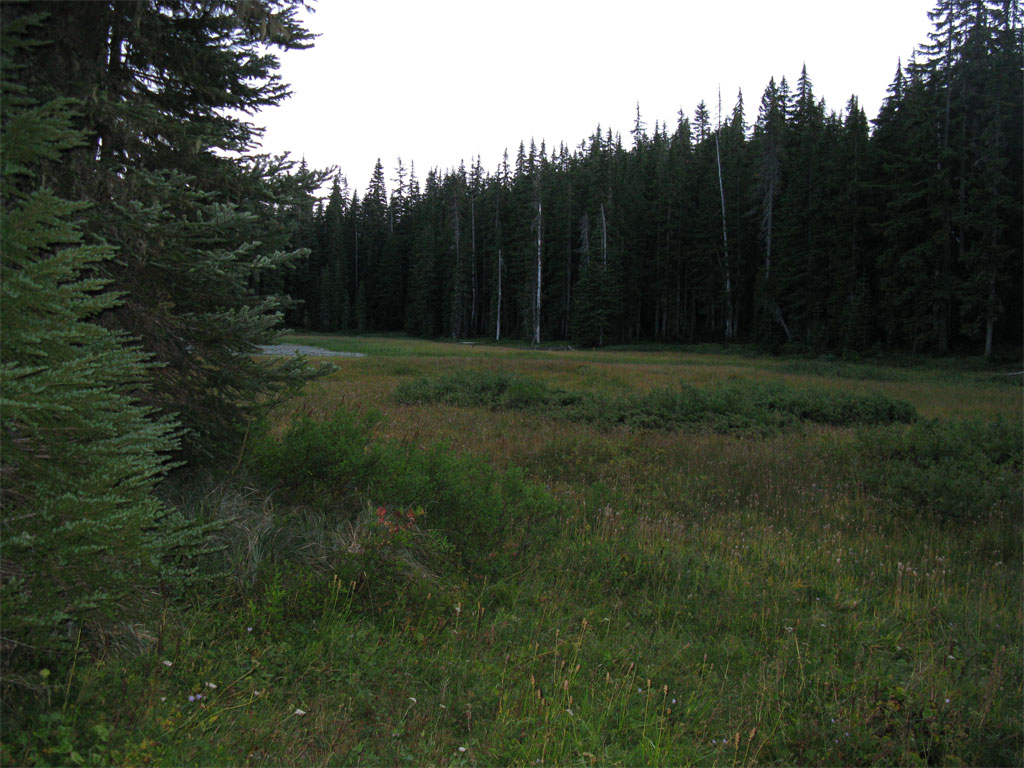 I managed to make it back to Frazier in near darkness and put on the headlamp for the trip back to the Shellrock TH. I arrived at the trail head around 10:00PM under bright stars and the Milky Way, about 14 hours on the trail - beat up but satisfied that I'd found a part of the 511 and sampled the route that must have been. A trail could be put through there, but where would it go? Link up with the 517? And where is the waterfall? A great lost trail adventure... 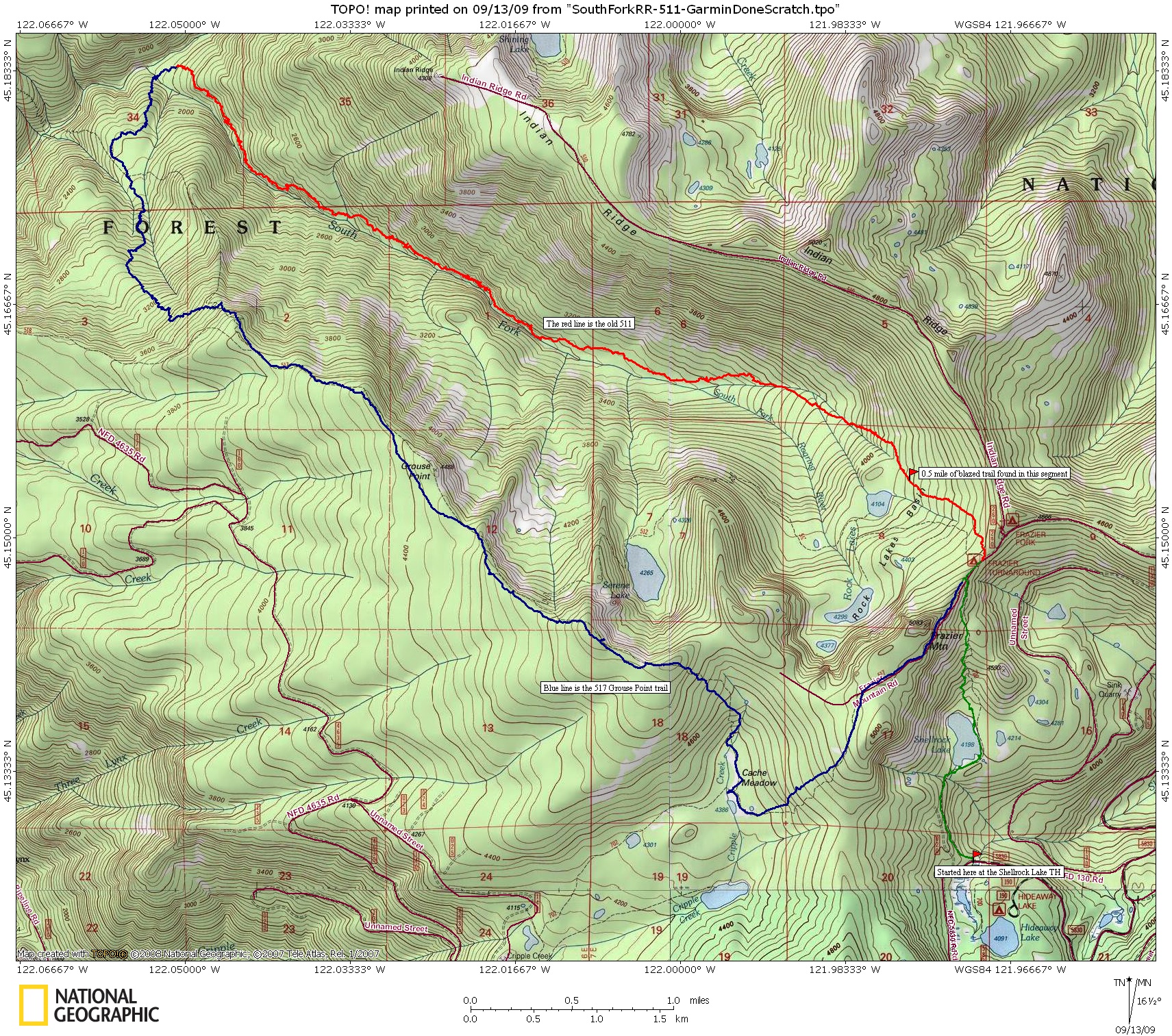 Excellent documentation, photos and report! I have never ventured into this area so am most interested. When and if you want to head in again I'd be interested - looks like a fine challenge indeed.

Holy cow Pablo! I was the backpacker that gave you the water! I was with my brother-in-law on the way to Serene lake. I'm extremely happy to hear you made it back safely. Great report, and in hind site, a pleasure to meet you

AlexanderSupertramp wrote:Holy cow Pablo! I was the backpacker that gave you the water! I was with my brother-in-law on the way to Serene lake. I'm extremely happy to hear you made it back safely. Great report, and in hind site, a pleasure to meet you

That's fantastic, thanks again for the water, I was feeling like I was on the edge - BTW, best water I've had in ages.

Excellent documentation, photos and report! I have never ventured into this area so am most interested. When and if you want to head in again I'd be interested - looks like a fine challenge indeed.

I've been looking at Gifford Pinchot maps and have found a couple I'm considering. Wow, the GPNF really worked to get the cut out in the 60s and 70s - lots of trails-to-roads. I'll post my pre-hike findings to this forum for discussion.

I neglected to post the obligatory shot of Mount Hood required of every hike in the MHNF. I'll be more careful in the future. This one from the 517 somewhere above Serene Lake. 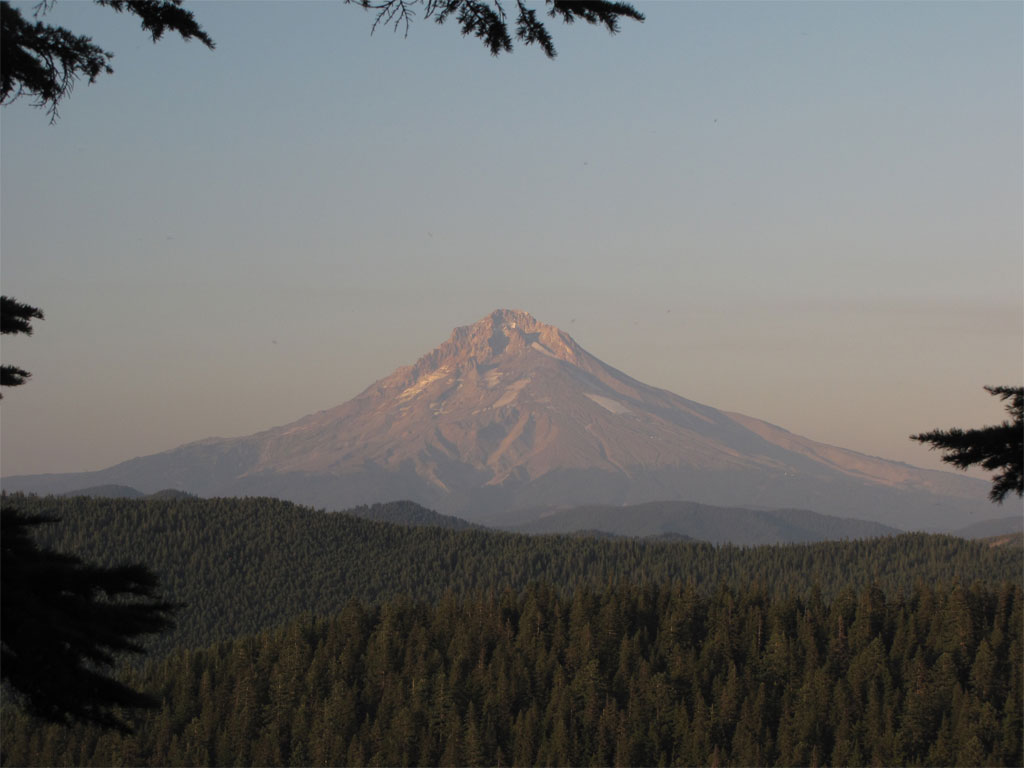 The future's uncertain and the end is always near.
Top

Thanks for the report. I visited Serene Lake for the first time a couple weeks ago, and love the area. I have wondered why there wasn't more trails in the area. It's nice to know the trails used to exist, even if they don't anymore. It would be great to resurrect the 511 and any other lost trails out there.
Top

Thanks, Paul - that's quite an adventured. Finding the blazes and a piece of tread moves this one into the "lost trails" column, and out of the dreaded "cartographer's imagination" category..!

From the old lookout pans of this area, there was hardly a stick of standing timber left in the early 1900s, so I've always assumed that the trails were pretty straightforward, traveling over burned terrain. That's the case with the north slope of Indian Ridge (where my namesake creek is located, by the way). Neat area.

Well it's been ten years since Paul's exploration of the beginning of this long lost trail. I'm happy to report that more of it has been found and am hoping that eventually even more can be located. The problem is that the old maps show the trail right next to the river when actually is stays higher on the hill where the rock fields are.

If you go, it would be appreciated if you took some loppers and/or a small handsaw to do a little trimming while exploring this old faint trail. As Paul says, it's beneficial to give your legs a little break from time to time and work on your upper body.