First of all, an overview of the trip: 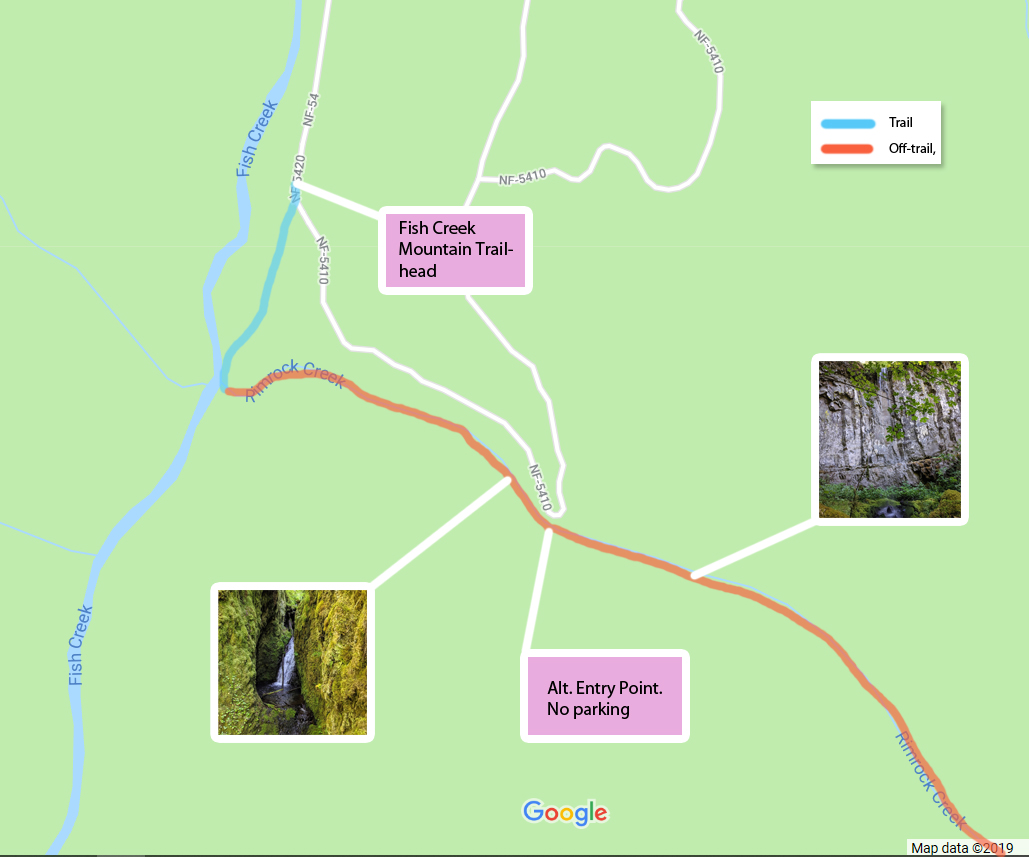 I managed to explore the entirety of this creek east of Fish creek in two sessions. One from Fish Creek Mountain trailhead to Alt. entry point in May, and another from alt. entry point to the root of the creek in June.

It started as a curious sidetrack while mushroom hunting around Fish Creek Mountain Trail. The trail is crosses Rimrock creek, and I thought it might be fun to go upstream because I noticed that playing "the-creek-is-lava" was very viable on this creek. 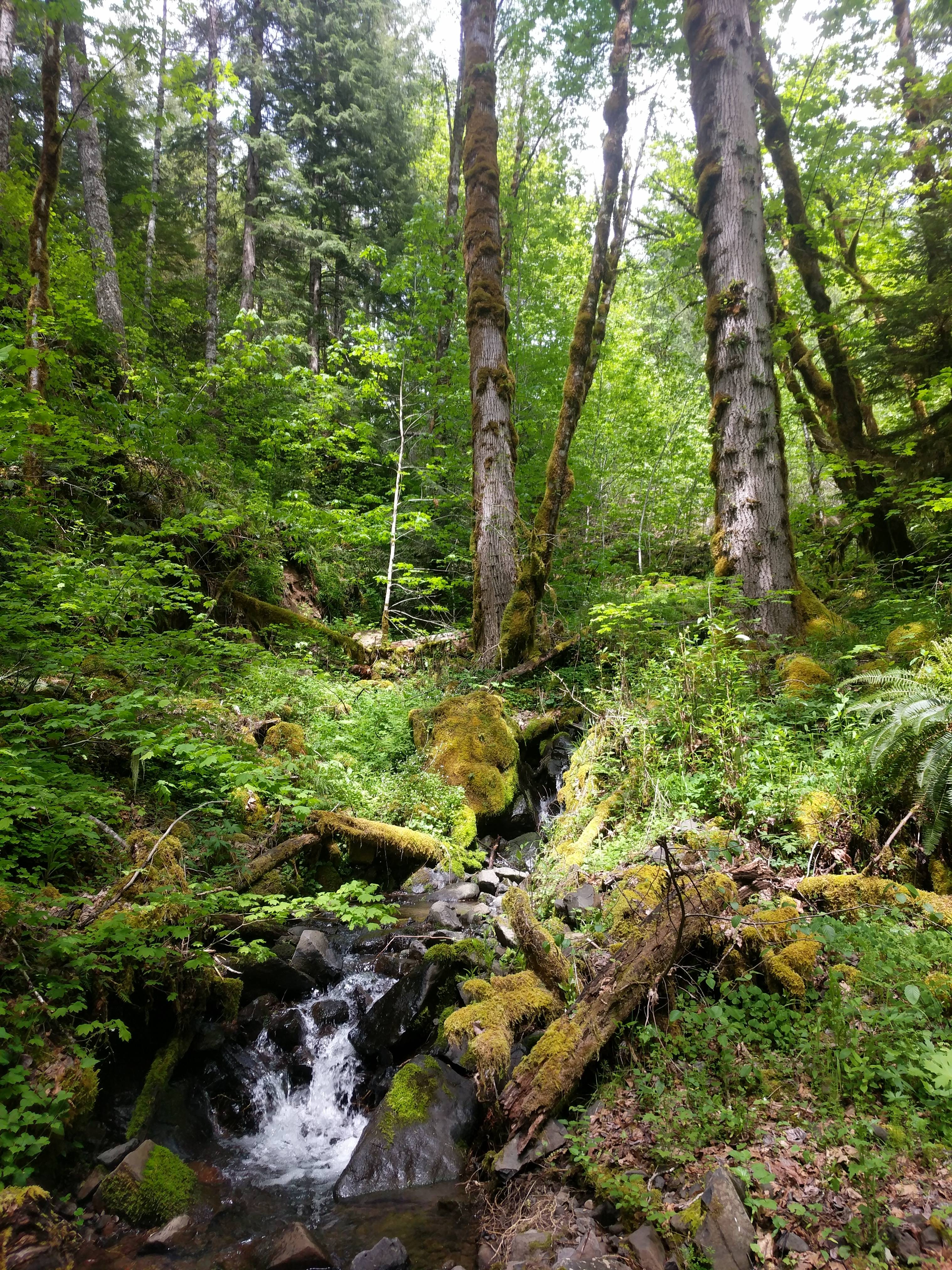 That exploration ended at small but very green waterfall. 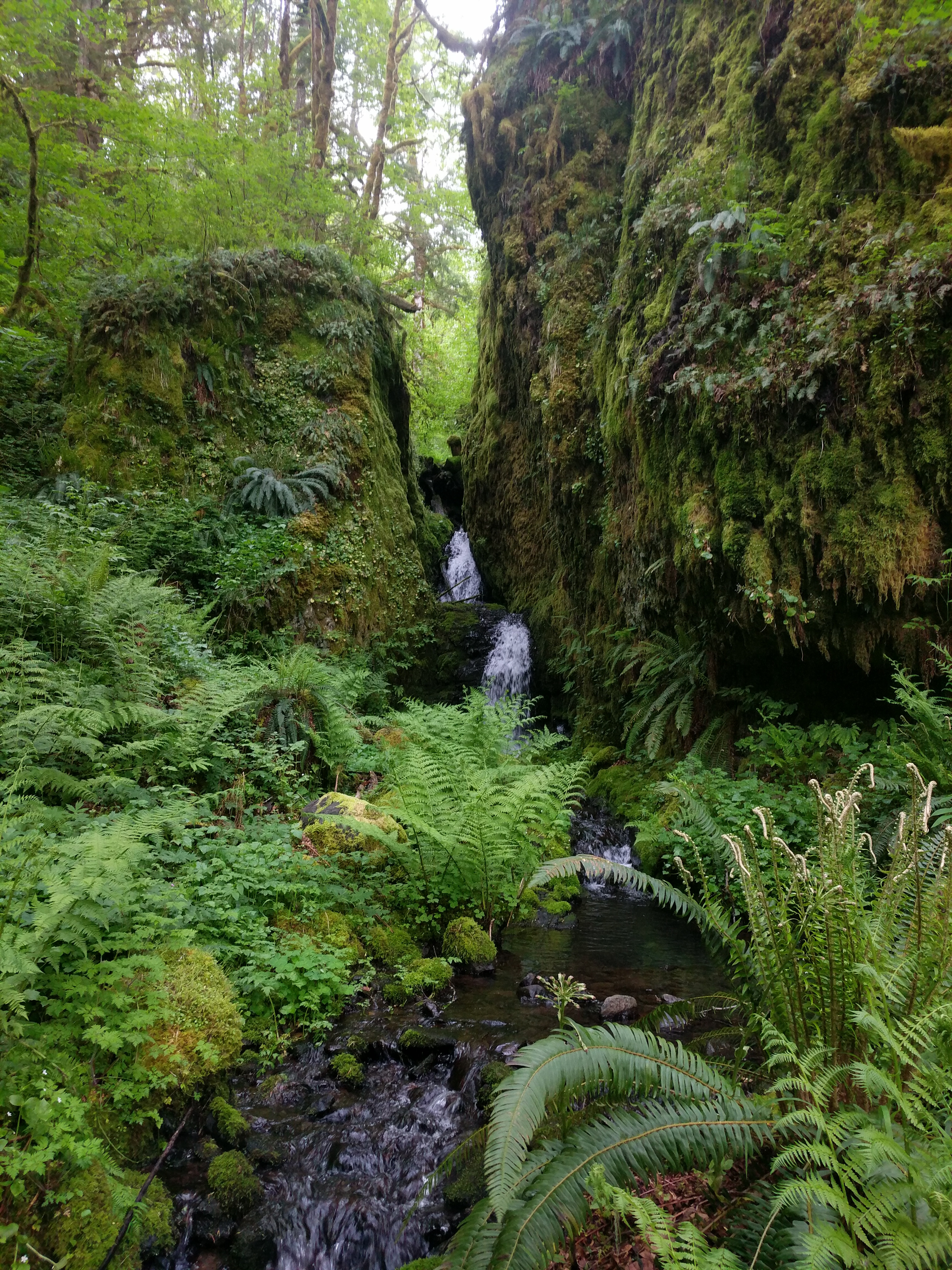 After ascending these waterfalls on the left, the creek soon runs really close to the road, and I reached a section (alt. entry point) where I could see the road right next to me, and I exited from there.

I discovered Memaloose Falls earlier in May. You couldn't see the top tier of that waterfall unless you rappel down it. When I saw those small waterfalls on Rimrock creek, I thought they would be a great place for me to learn how to rappel. So I went back a month later, with ropes and great. I parked at the same place but walked up the road to alt. entry point. I did a few rappels from each side of the cliff and directly down the waterfall. This is picture taken from half way down on my very first rappel: 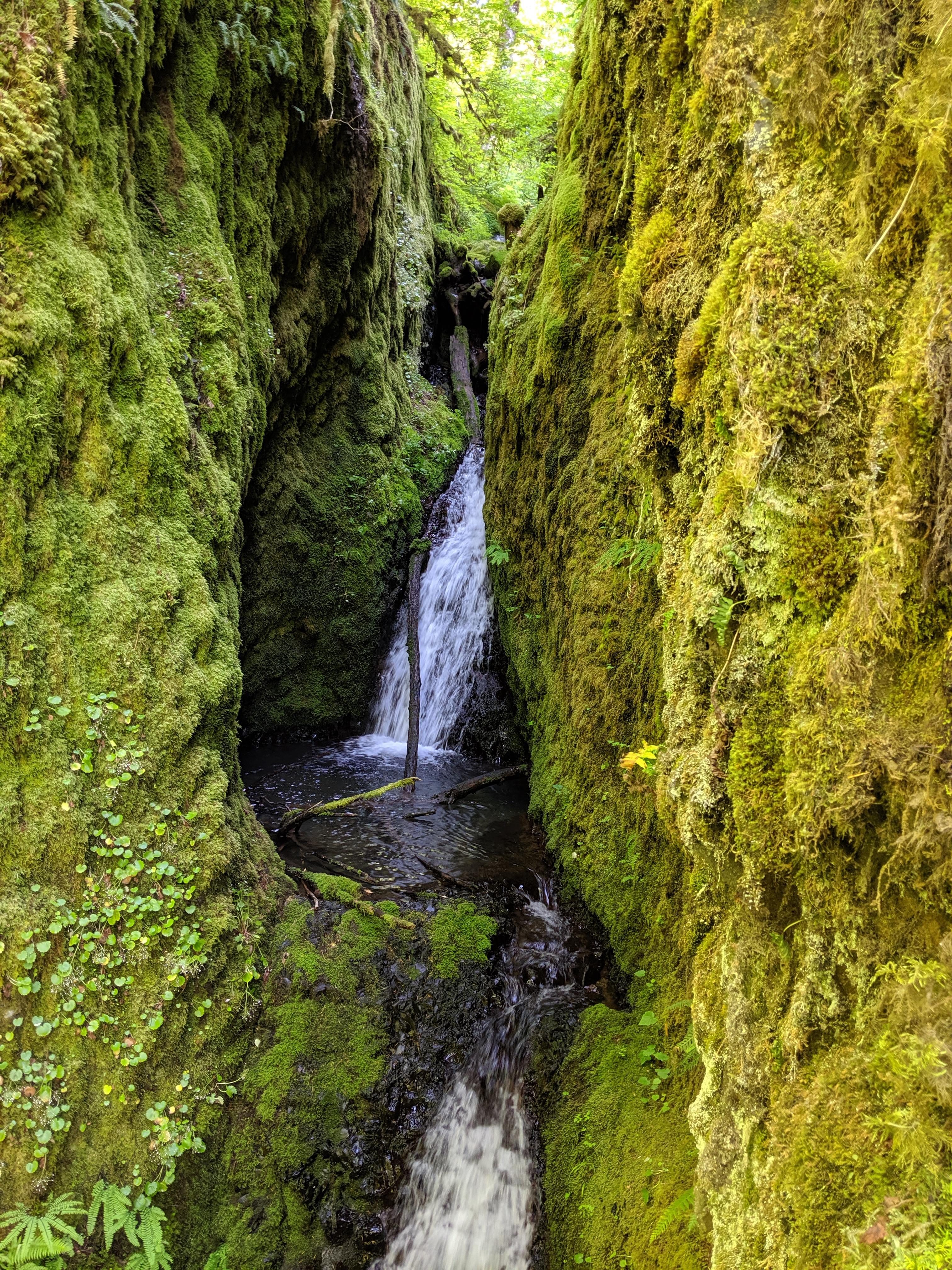 I really like the look of green narrow canyons, even though it is only a short section. 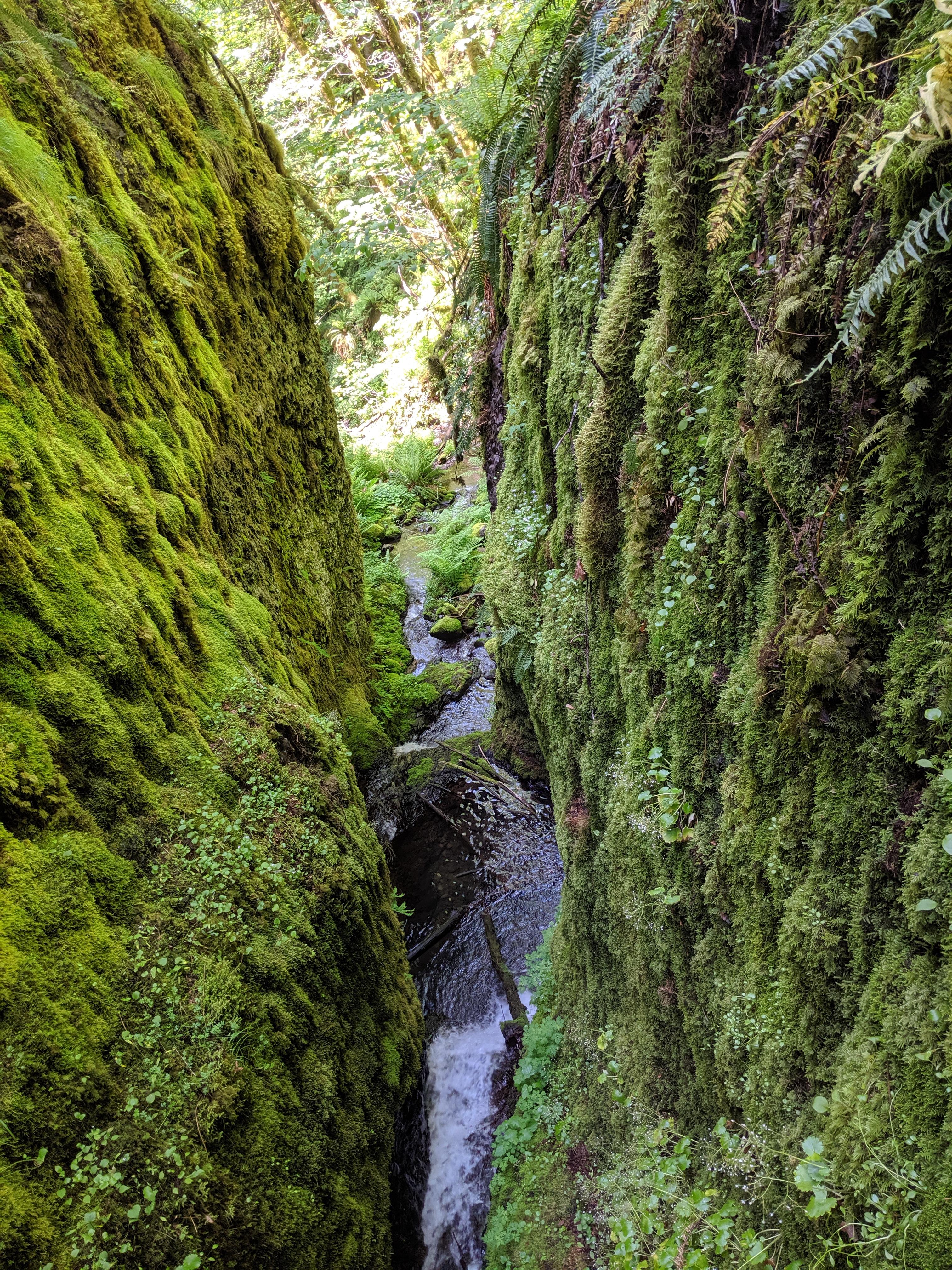 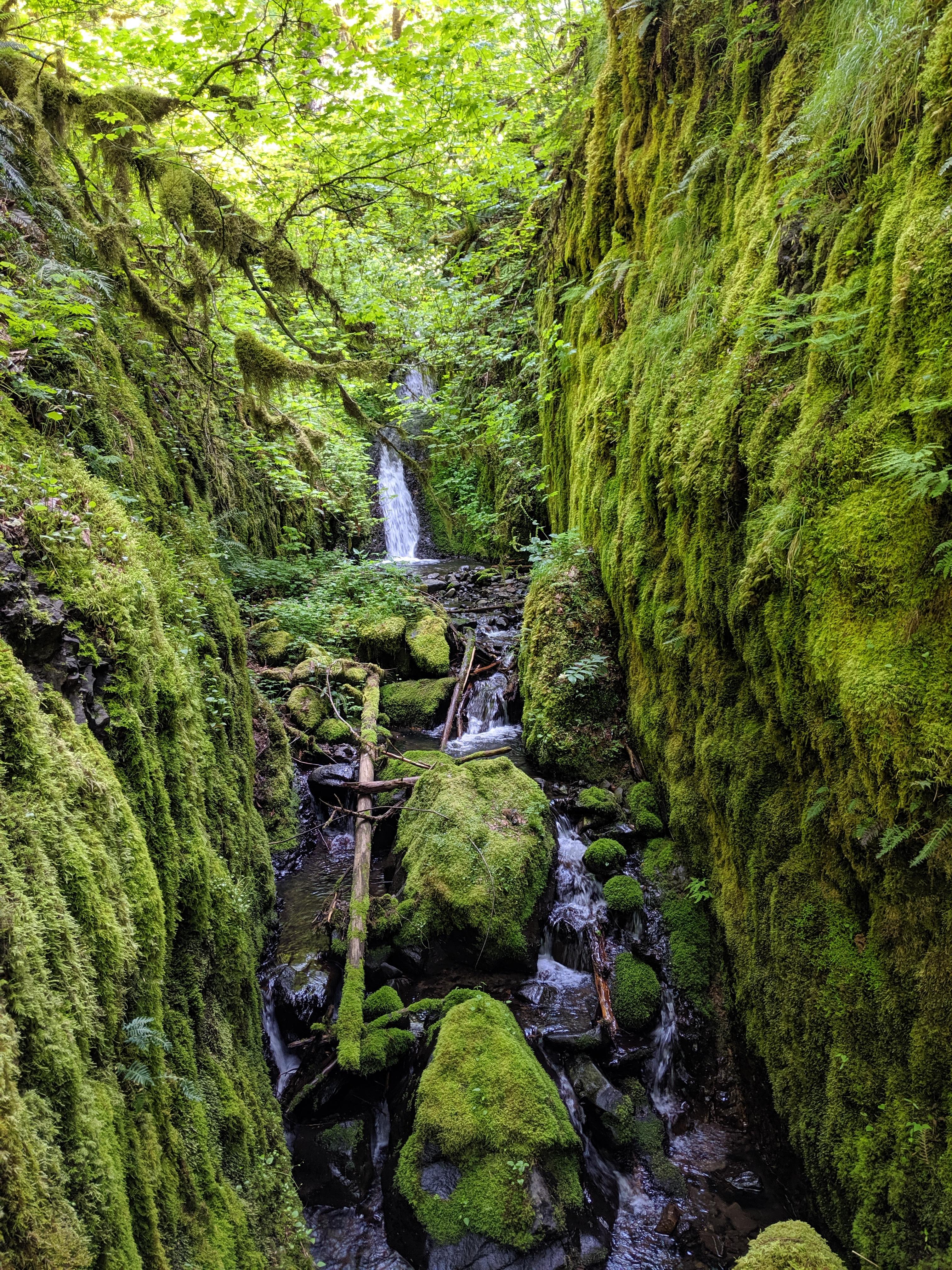 Then I ditched my ropes & gears and marched further upstream. Branches started to cover up the creek, and it became more difficult walk on the creek, but only for a little while. Then I ran into a cool rock wall. There wasn't much of a stream, but I wonder if I could get a better sight if I come back on a rainy day in the spring. 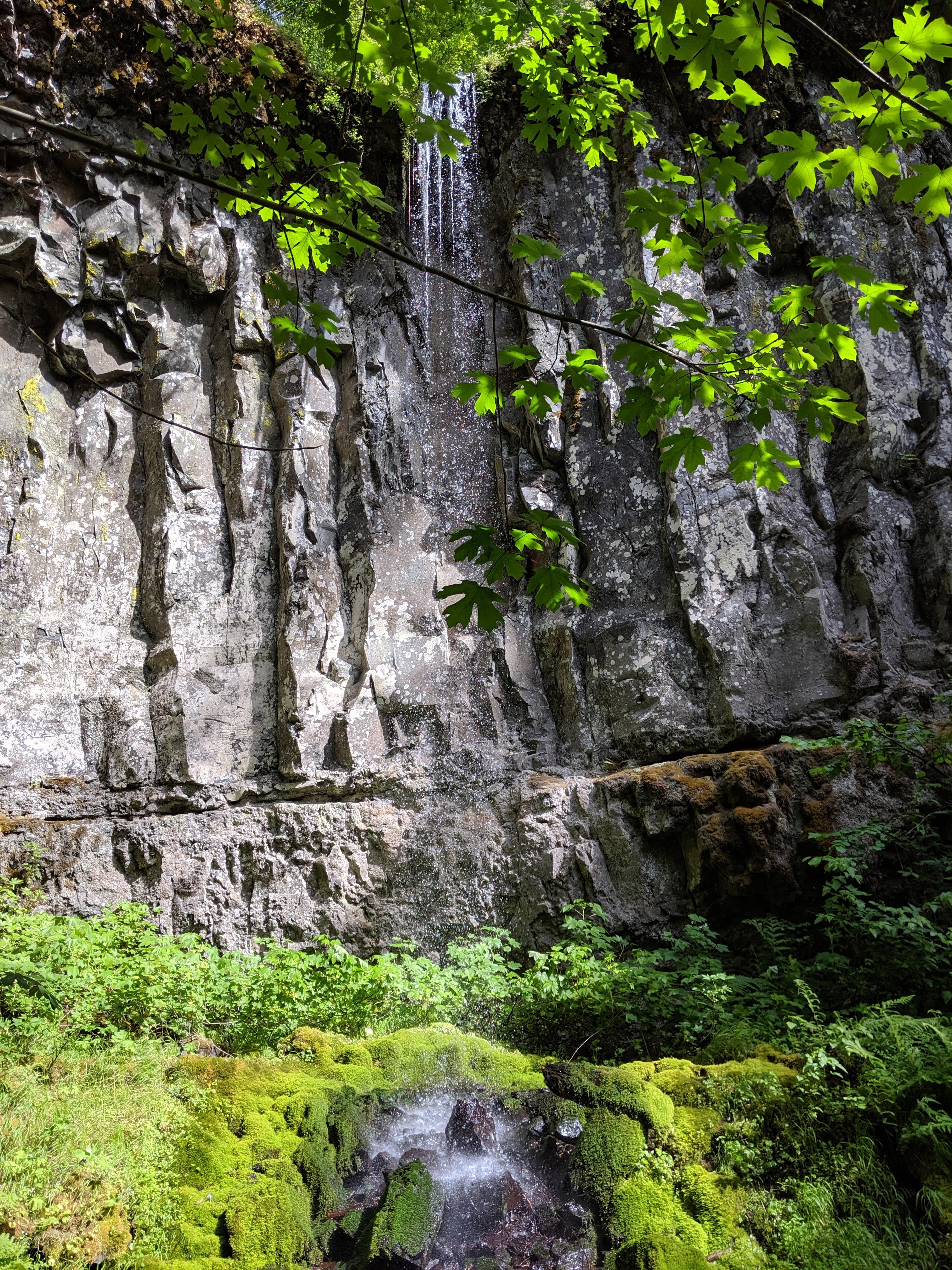 I took a picture from the side as I hiked up. It looked a bit more amphitheater-ish. 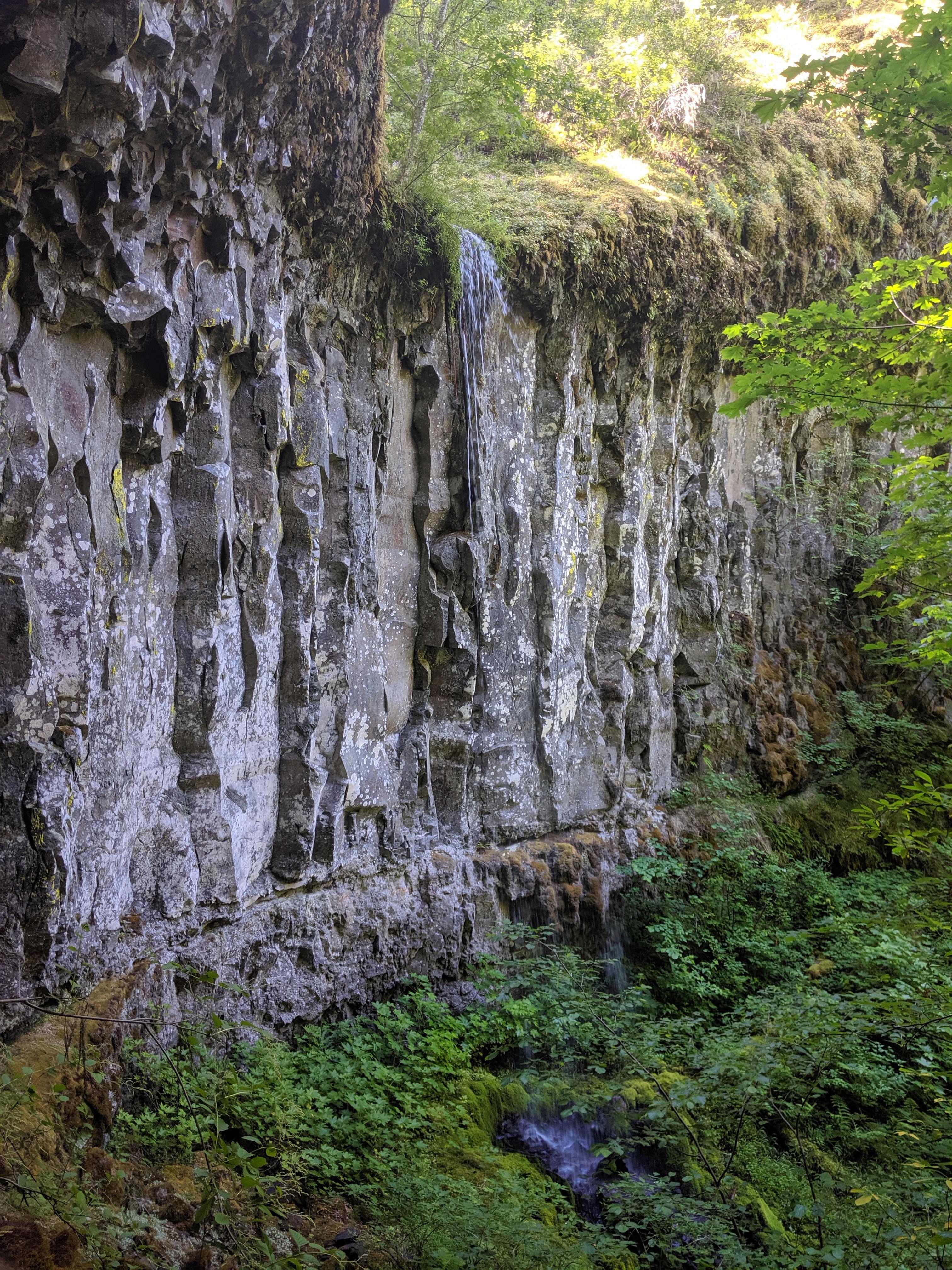 There were numerous smaller waterfalls further upstream. It was really fun to climb up them. The creek started to disappear and reappear, but I was determined to reach its origin. It started to get really difficult with some steep slippery slopes to climb up. At some point, there was ~20ft waterfall that was in view from the bottom, but completely hidden by the bushes once I got above it. I was really concerned that I might not see the waterfall on the way back and accidentally step over it. Luckily, it didn't happen. The view was quite amazing (at least to me). It's not a grand view that fills you with awe, but a view so full of green that it engulfs you. 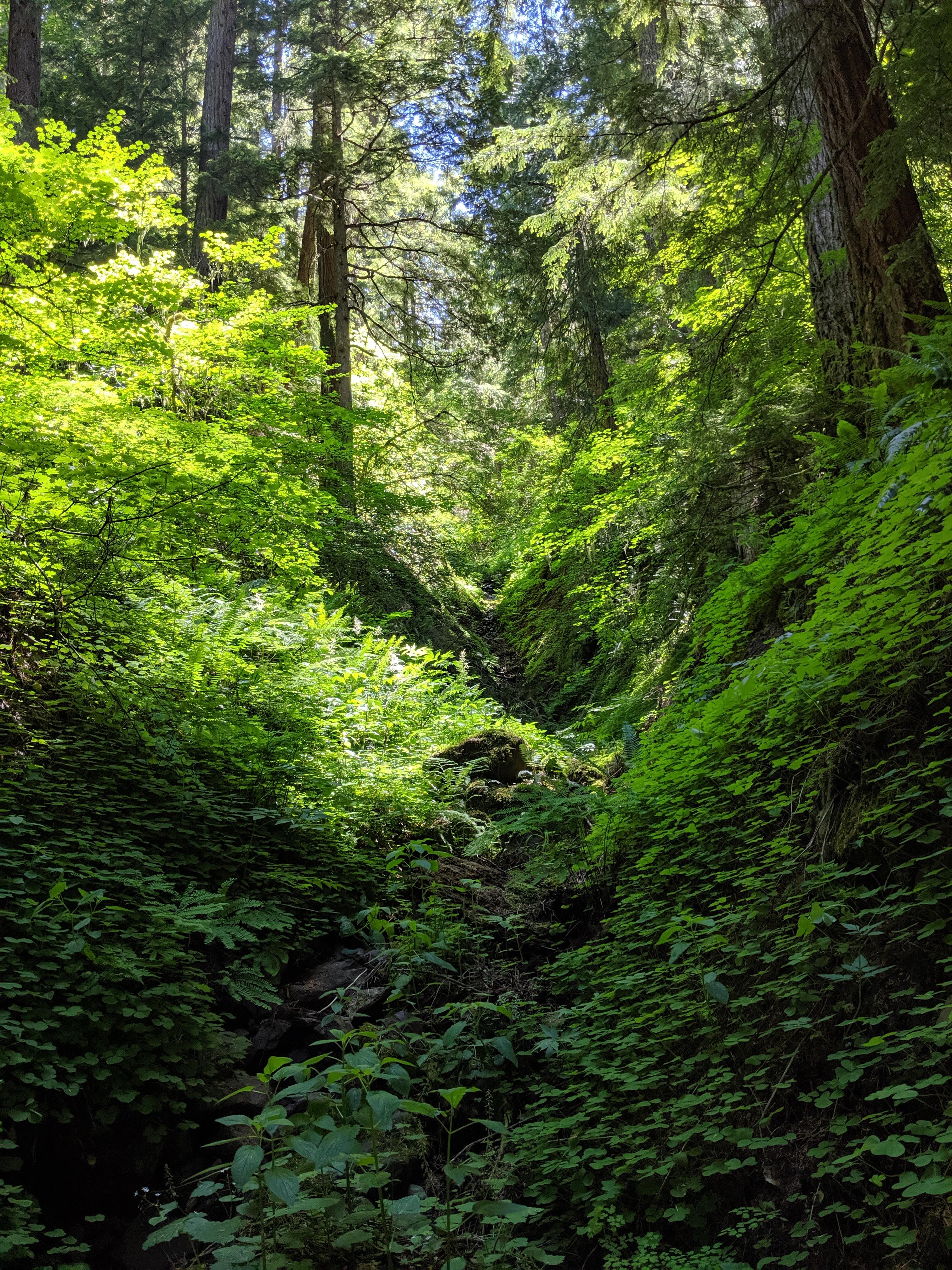 In the end, I did reach to the "origin" of the creek according to google maps. It was just a muddy field in the forest up a hill. It was nothing impressive, but this was beginning of my fall to the dark side of hiking. This was the apple that I ate, and I left the safe harbor of trails and sailed off to east of Eden, to the numerous creeks and waterfalls scattered all over the place, to whole day hikes up creeks and canyoneering trips down creeks, to the excitement of exploration and puzzle solving my way over various obstacles.
Top

Yeah, that's usually how it goes. The one time I found a really big spring, I wasn't even looking for it, wasn't really following a creek, just stumbled into it. Still, I usually find it somewhat satisfying to follow a creek up so high that it fades into a muddy spot.
Top

A fun report. Thanks! I need to try something like this some day.
Top
Post Reply
3 posts • Page 1 of 1