First of all, a quick overview of the trip: 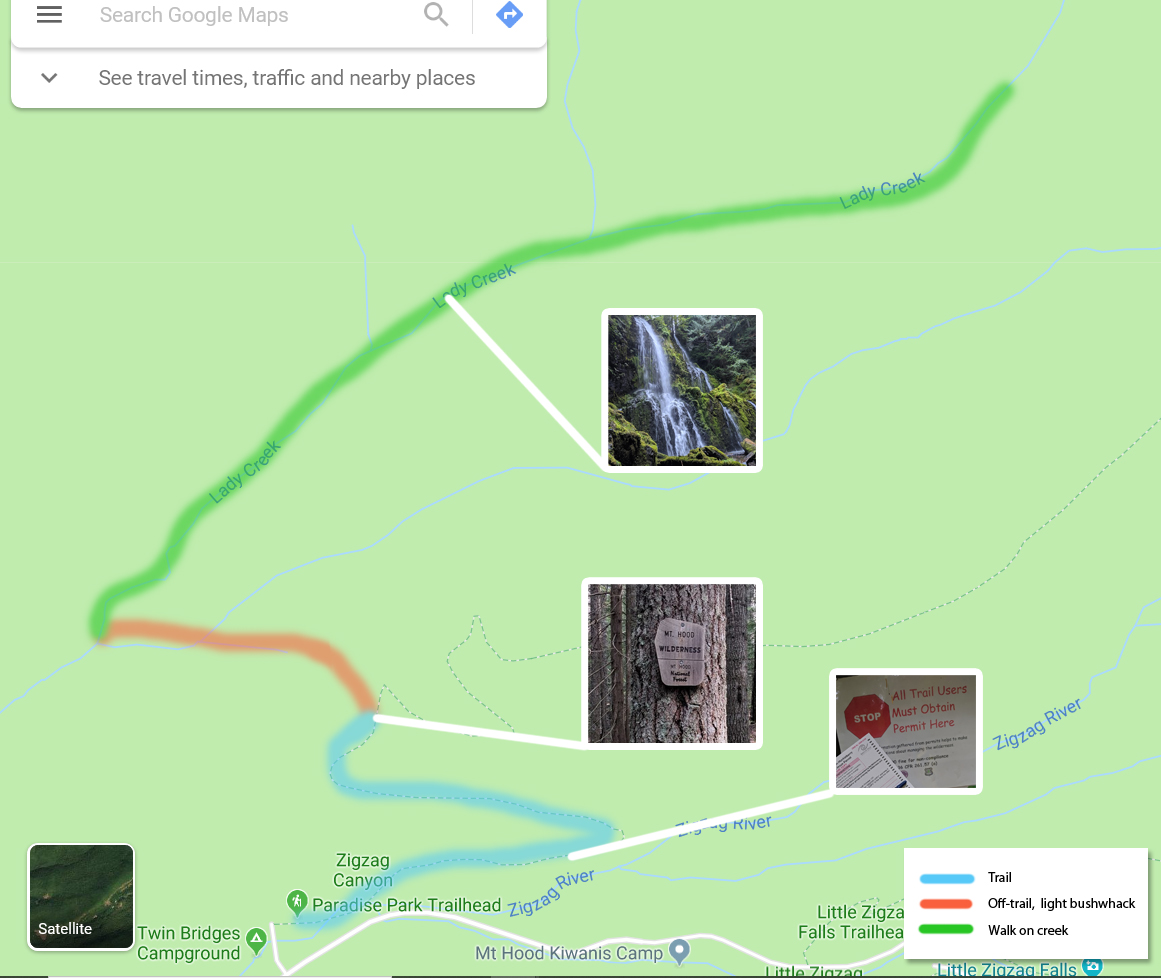 I arrived at Paradise Park Trailhead around 11am. There was one other car there, but it seemed they were on a different trail. It was a gloomy day with rain in the forecast. Mushrooms were popping out left and right. After starting on paradise trail #778 for just a bit, I spotted a particularly spotless mushroom: 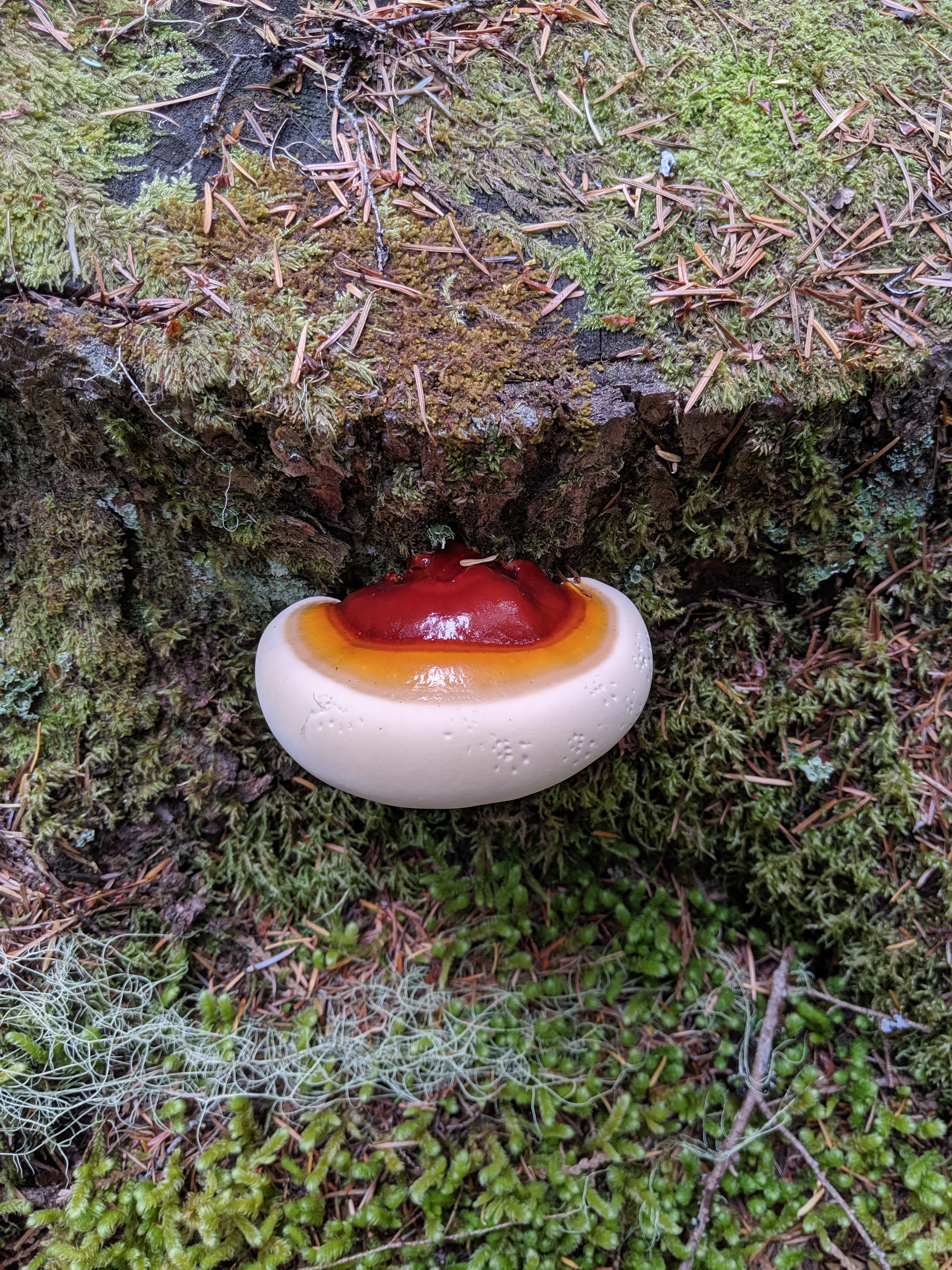 I continued on the trail up the hill and started to cut toward Lady creek when I saw the Mt. Hood Wilderness sign on a tree. The descend down to Lady creek was not too difficult. There was no heavy bushes, and I was mostly walking on a smooth path that zigzagged all the way down to the creek.

Just a little bit upstream, I encountered a small waterfall 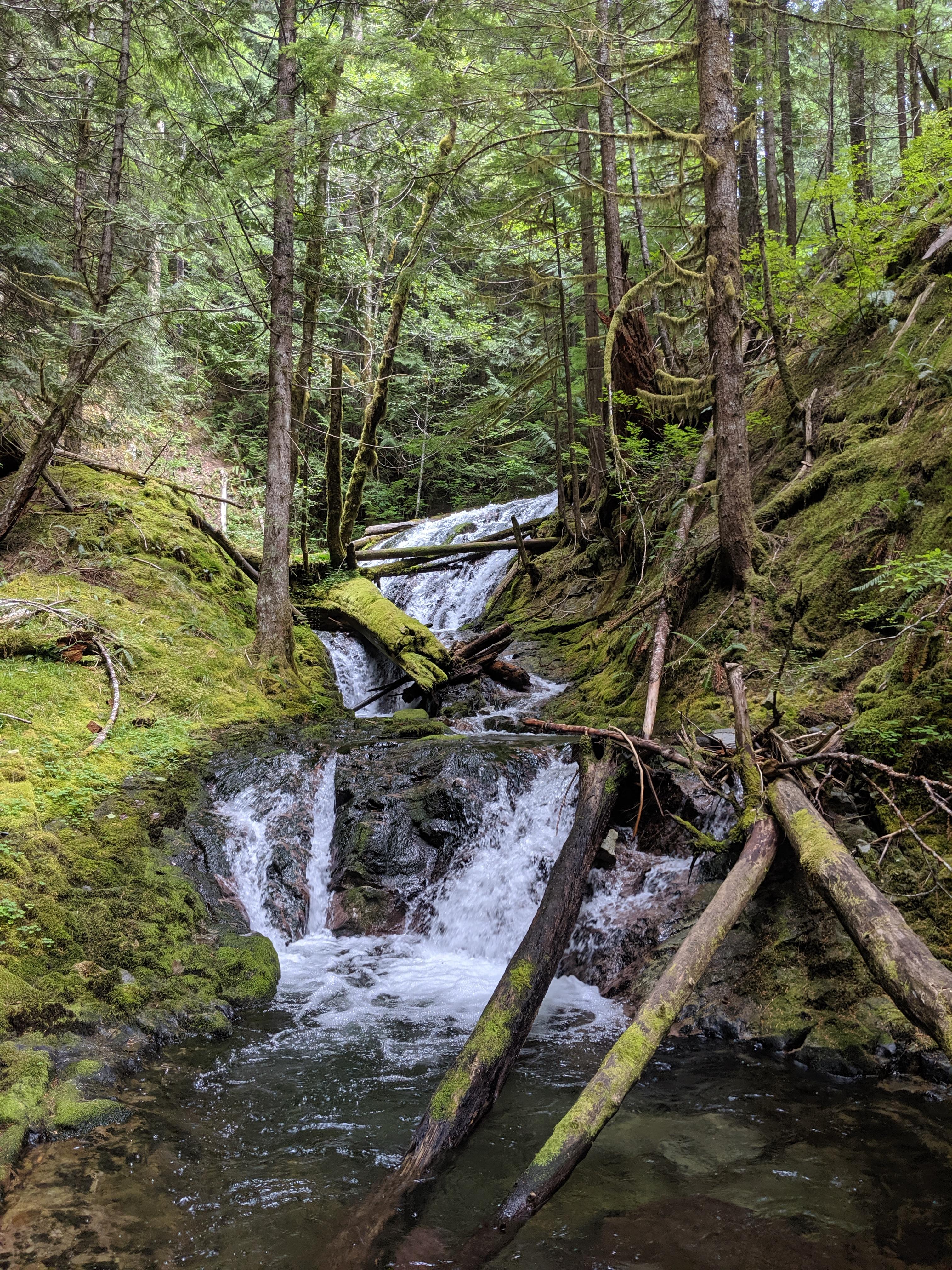 The creek is mostly a giant bedrock. There's not much "the-creek-is-lava" to play, but it was easy to walk on. A little bit further up the stream, I reached Lady Creek Falls. It was greener and more beautiful than I expected. I hang around there for a while and went up the waterfall on the left (facing upstream). 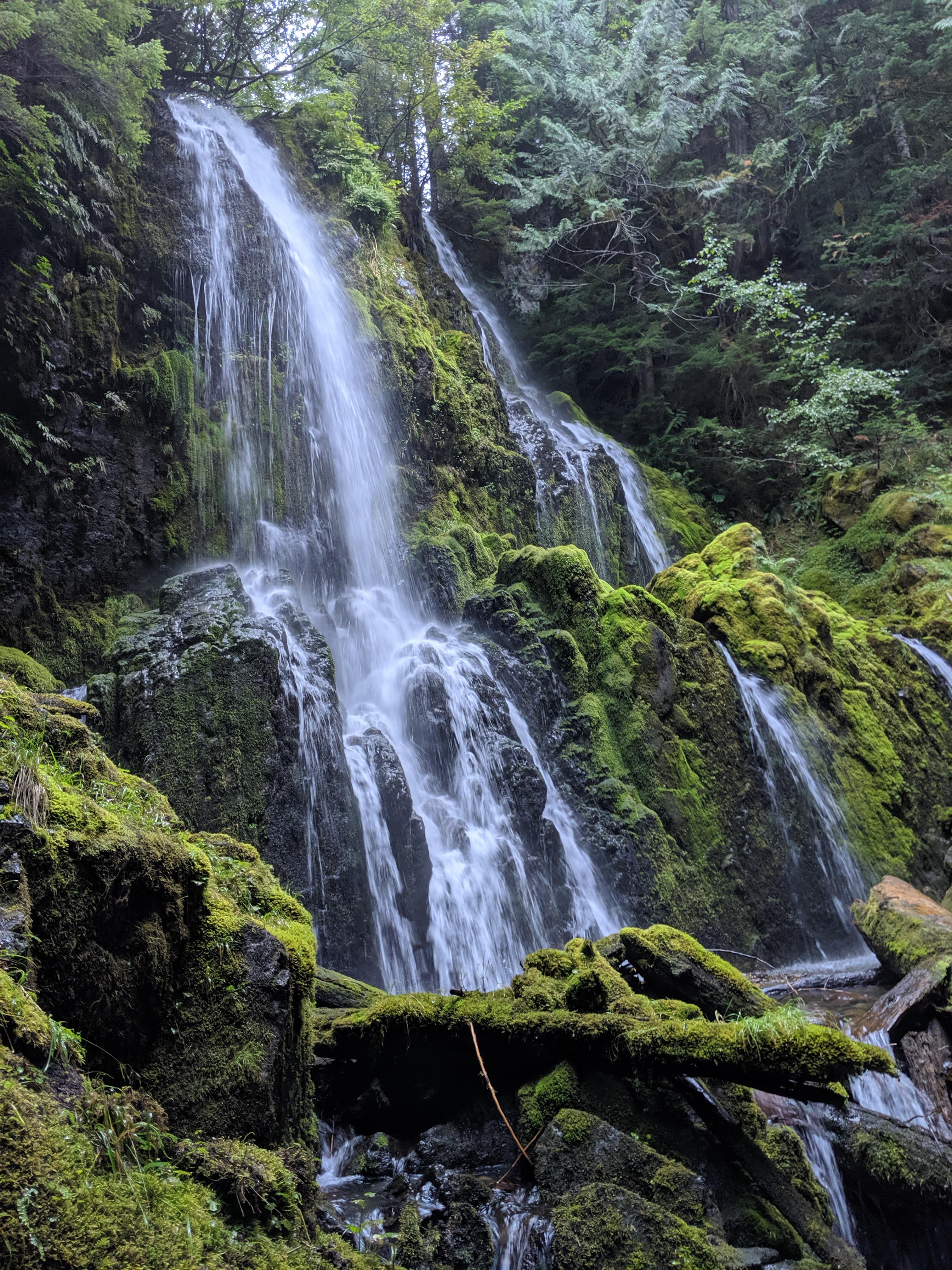 Took a peak at the waterfall from the top 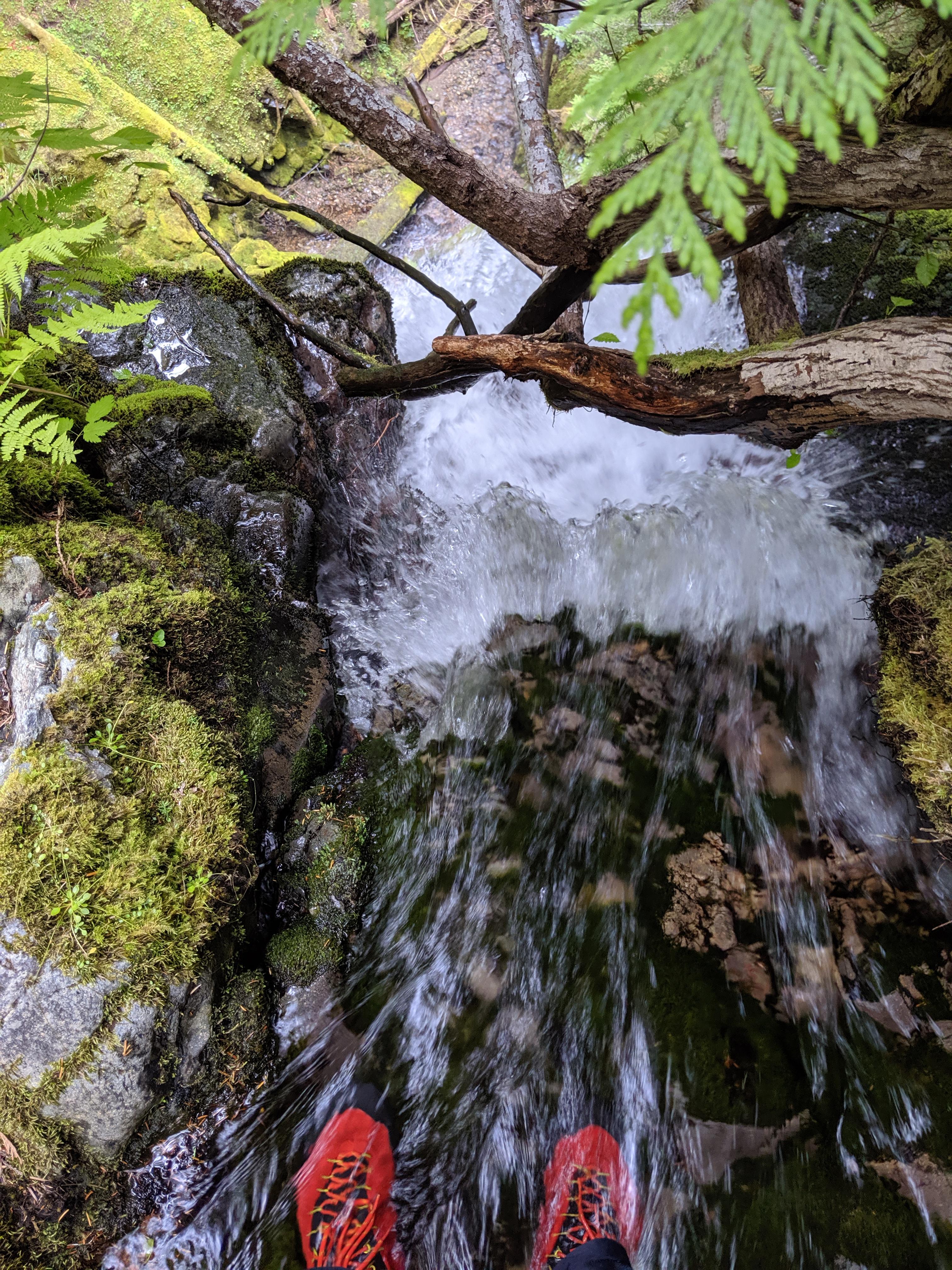 I went quite far upstream of the waterfall, but I didn't encounter any other big waterfalls, what I found instead was this fantastic mushroom kingdom. Guarding the kingdom's border was this lion: 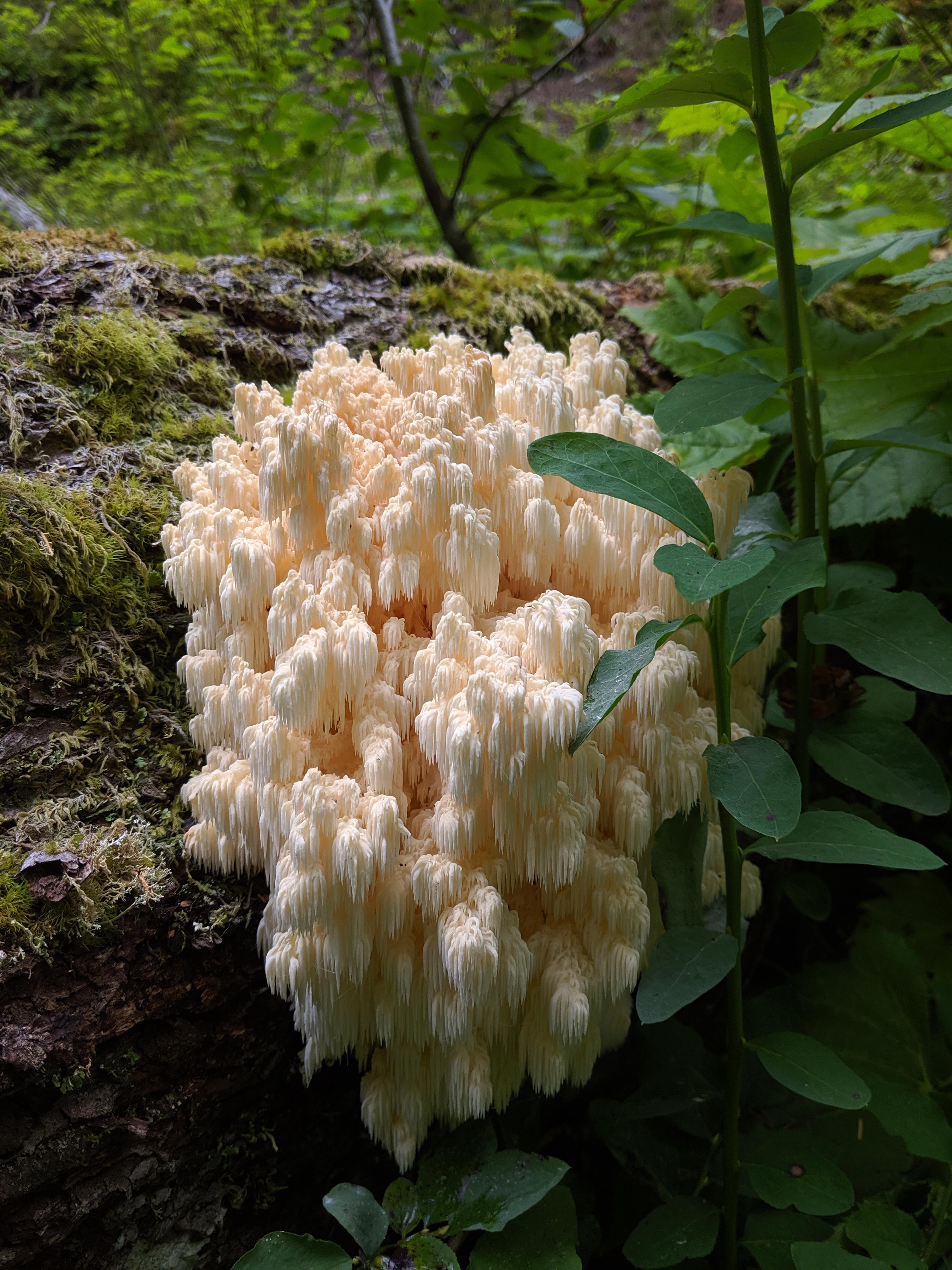 There are a lot of these little guys scattered all around along the creek as well. They must be confused and think they are corals under the sea. 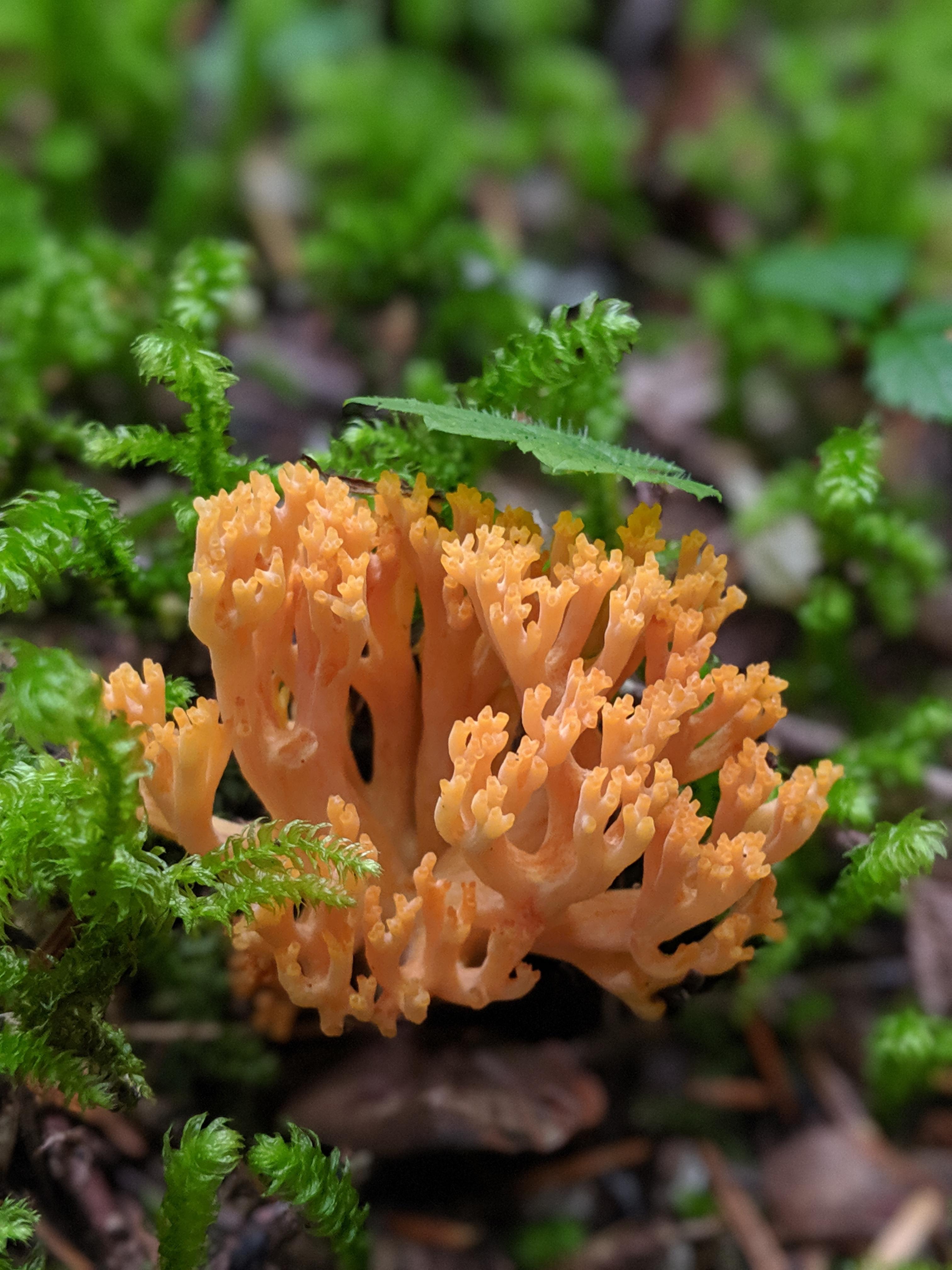 Then I spotted this thing that looks like some monster from a horror manga: 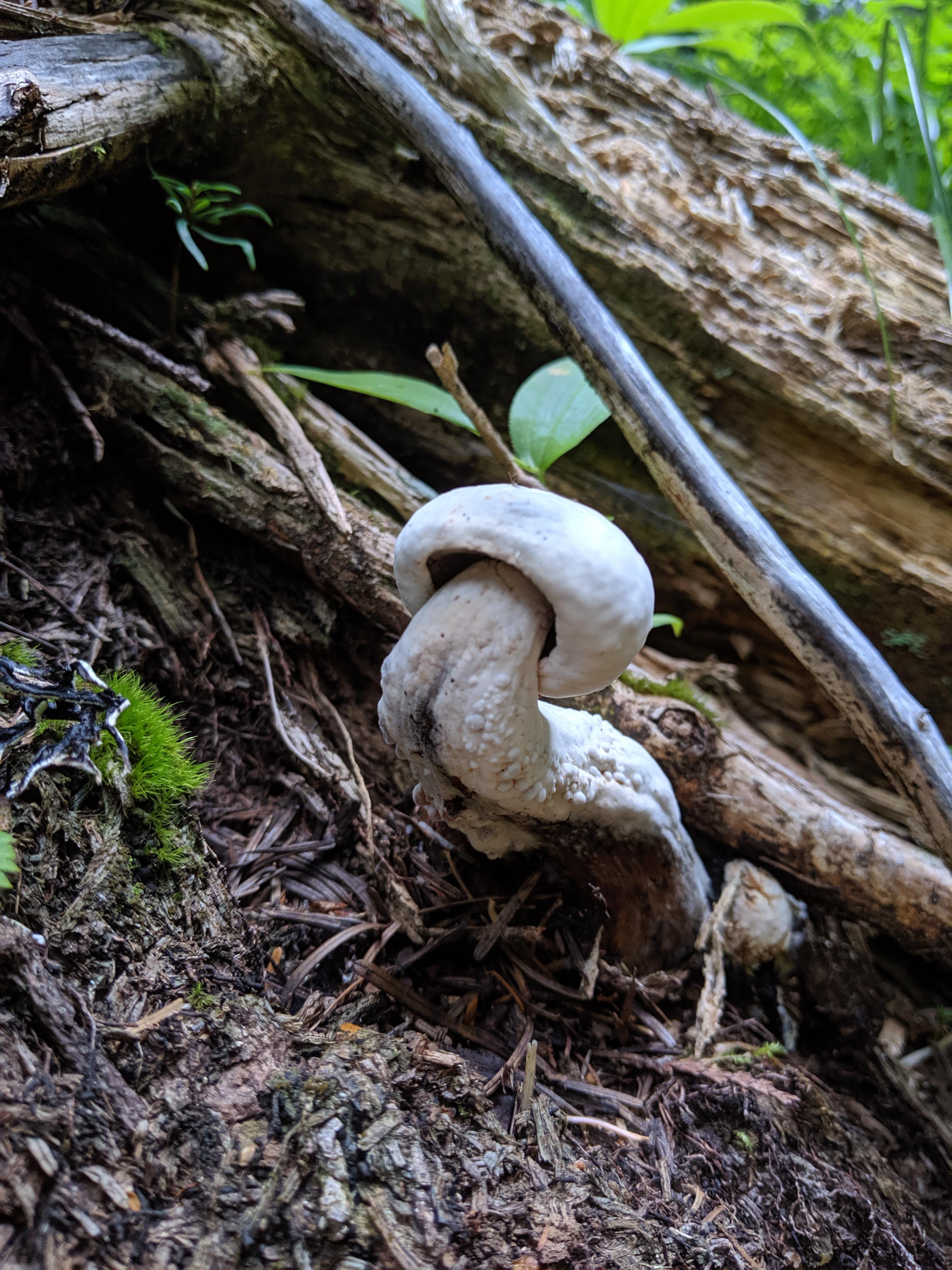 I thought this was an upside-down mushroom, but it's right side up and rooted in the ground. I have no idea what happened here: 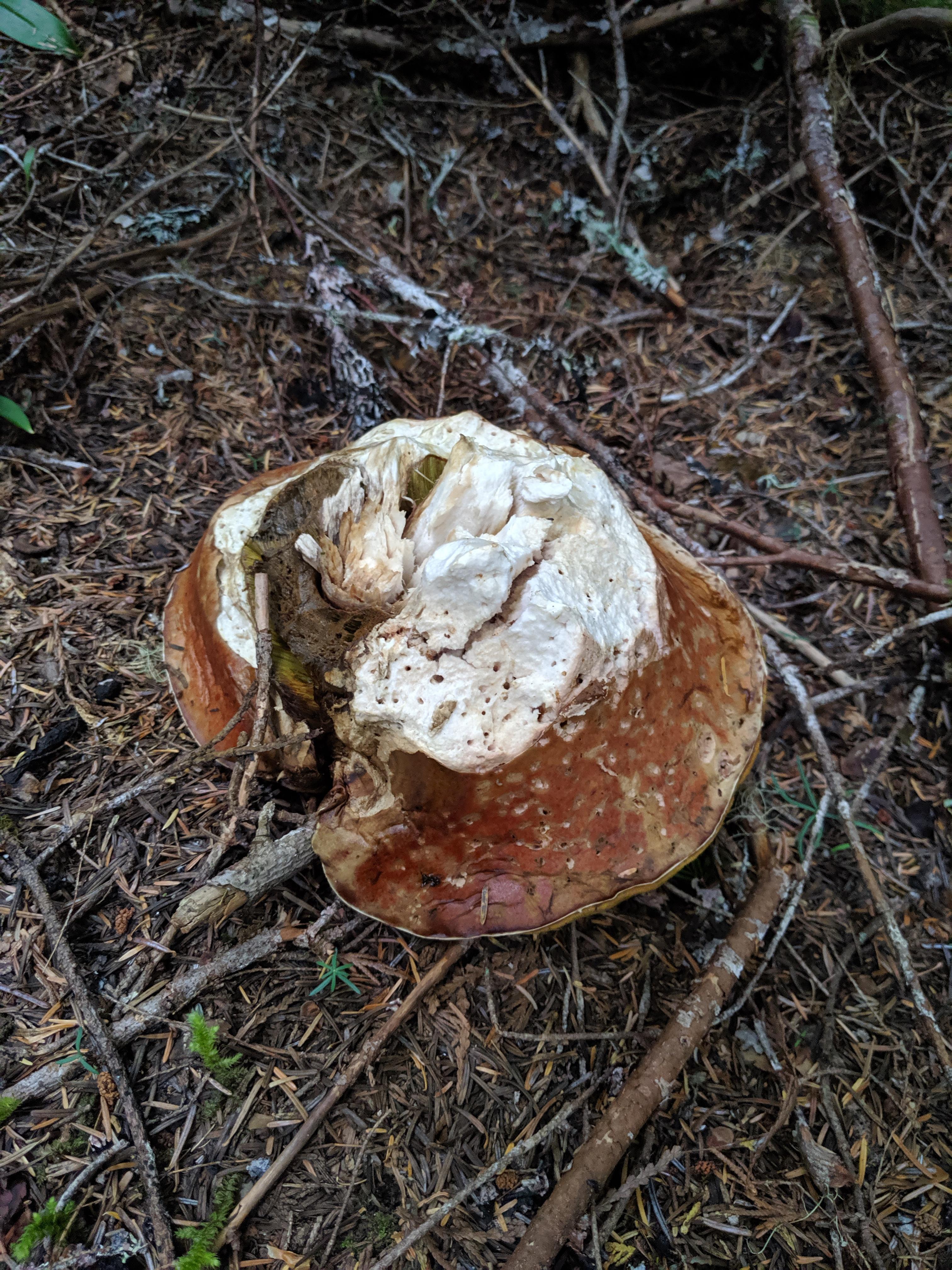 But nearby, I spotted its sibling that doesn't look as "damaged": 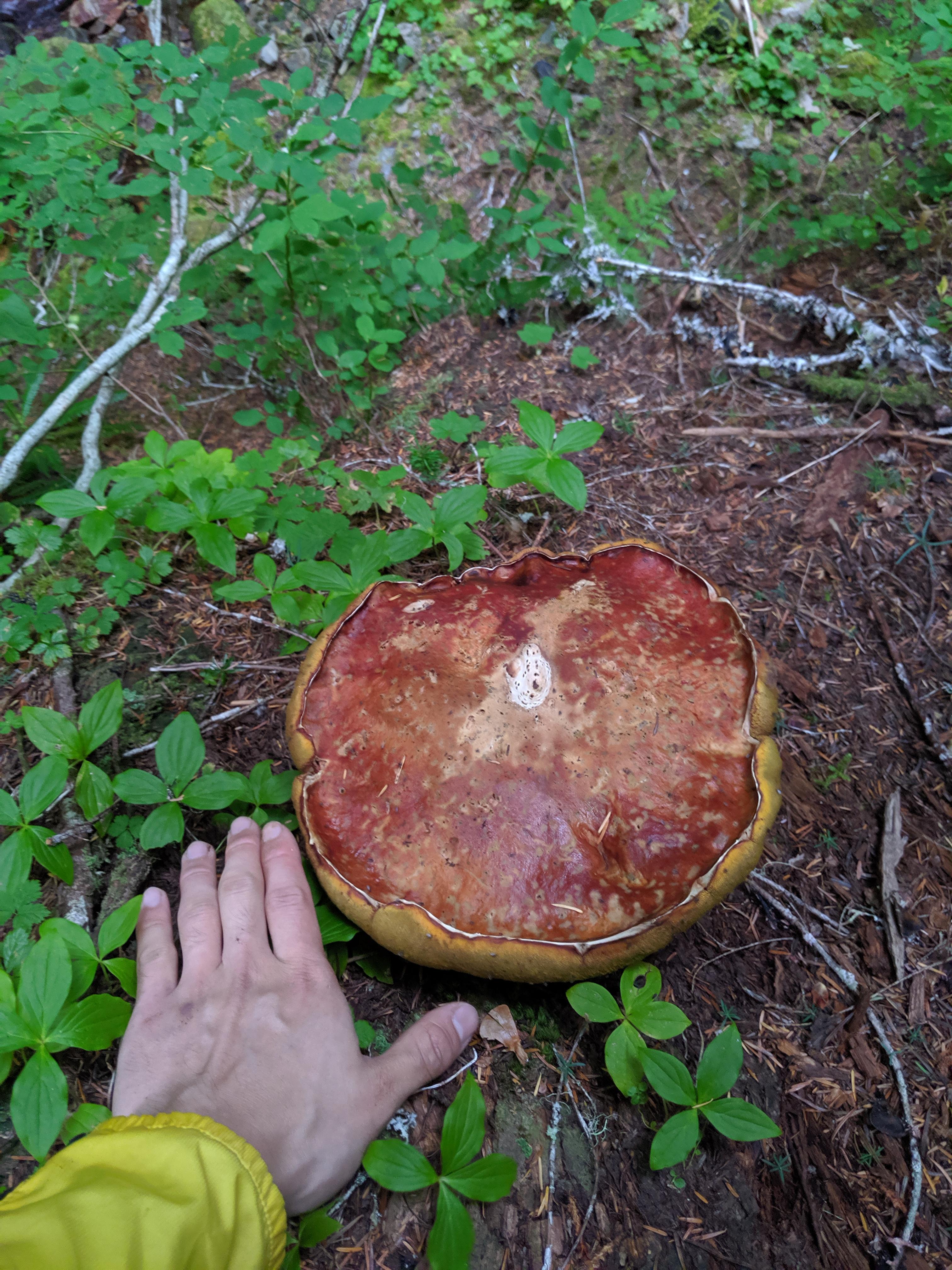 From under side, it looked like quite the beast 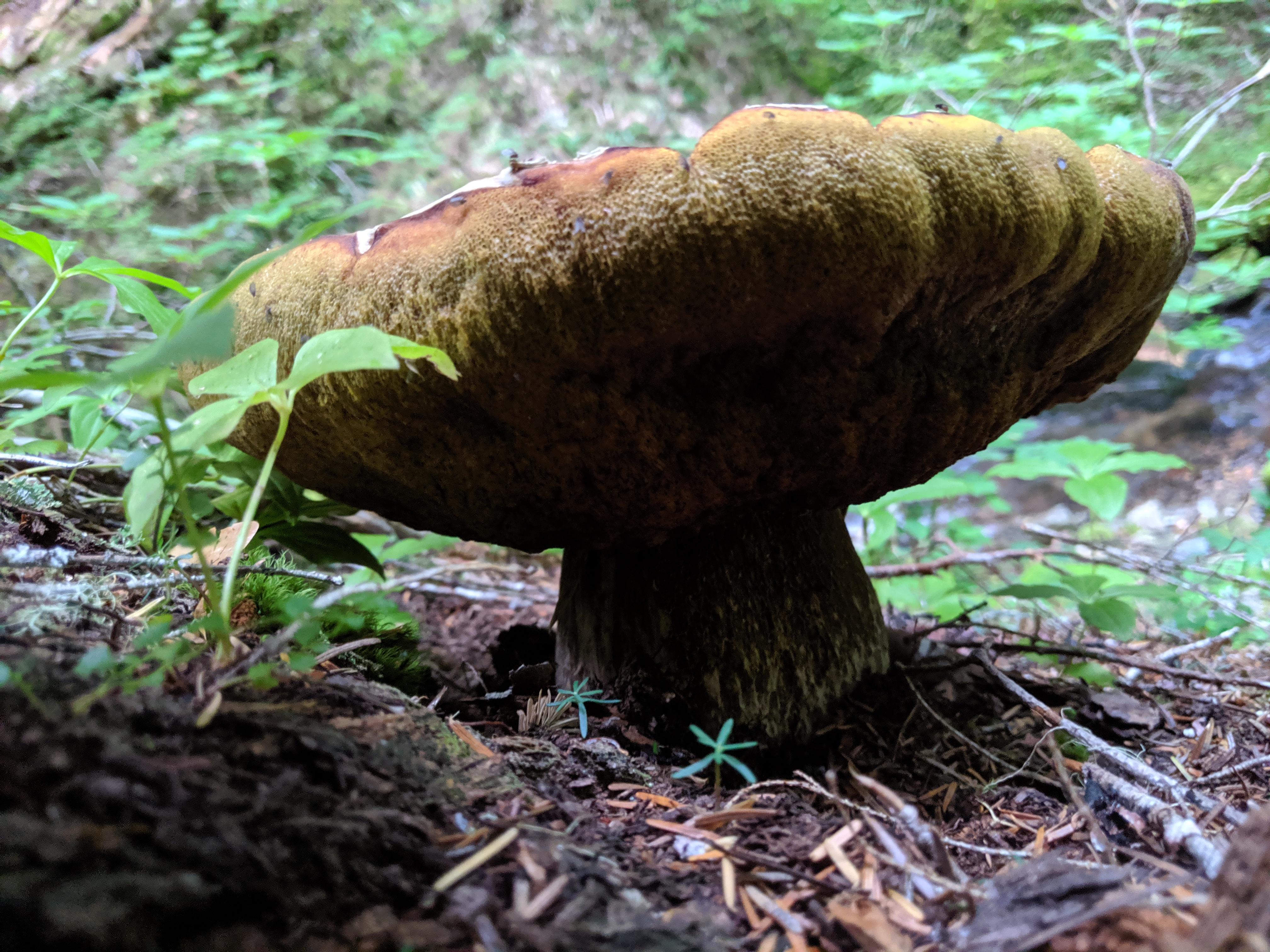 There were a lot more varieties of mushrooms. Some were green, some looked like chestnuts, some looked like pancakes with face. Too many for me to post a picture for each. But here's my favorite: they are purple with white spots. they look cosmic, and they match the space cat pants I was wearing. 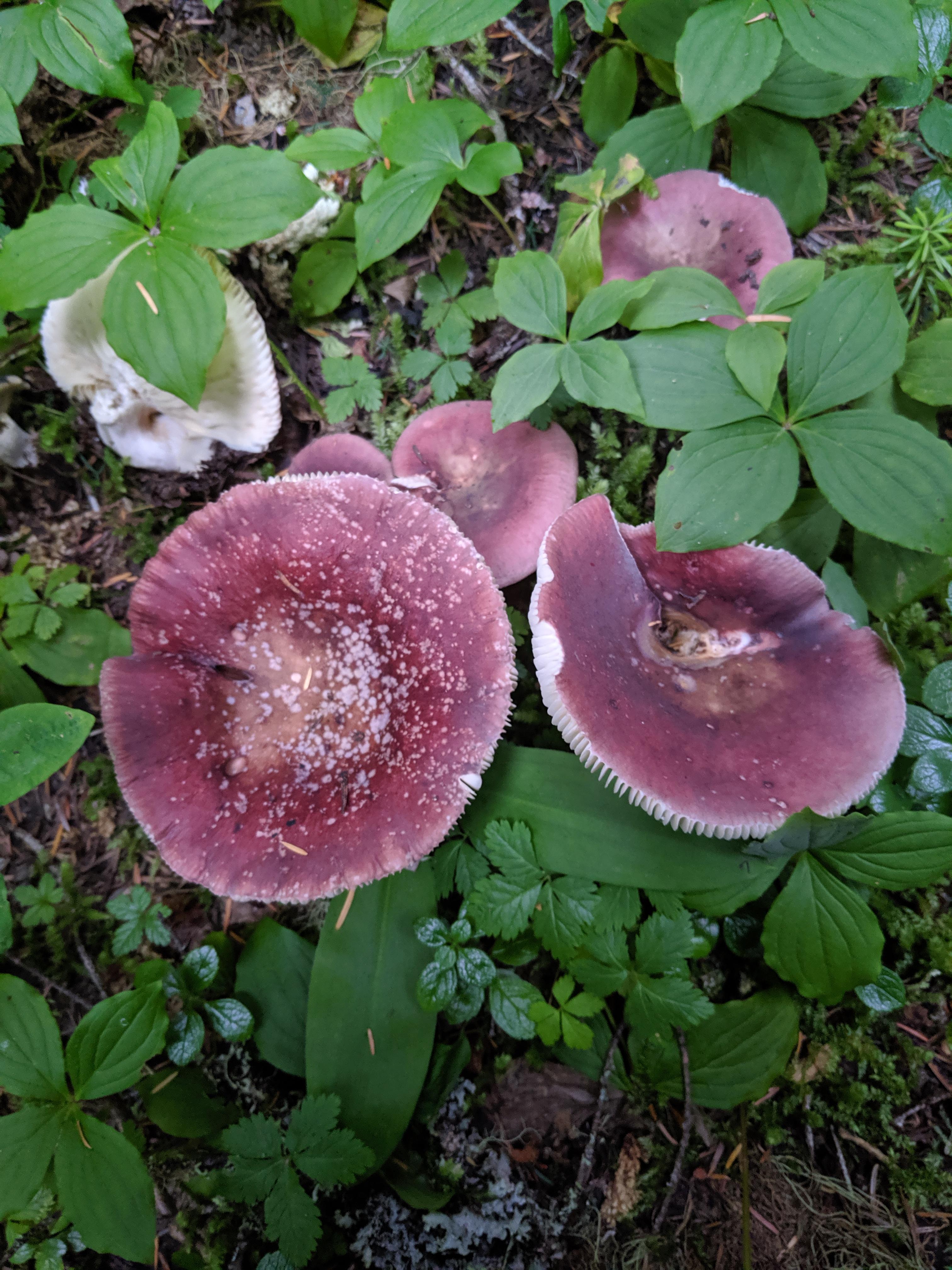 I was hoping to go even further upstream the creek, but my feet were getting too cold, and it was getting late in the day. I turned around at 45.333137, -121.792742 and headed back. I made it back to where I first got on the creek without a problem, but from there, I had trouble getting back on the trail. At some point, all directions look the same, and it was really easy to get lost. I had to pull out my phone and used its gps to find my way back.
Top

Nice report! I've toyed with the idea of following Lady to PCT, but that would probably cease to be fun after a while.

That's not a bad place to get lost; even w/o gps, a random southbound shwhack takes you quickly to US26.
Top
Post Reply
2 posts • Page 1 of 1